I was looking for a relatively safe quick canyon/valley hike in the vicinity of Adams Glacier. Weather forecast called for high wind and chance of precip. I didn't want to make a commitment to being too far from my car, and I couldn't risk getting lost in a whiteout, and I didn't want to be on ridgecrests in that wind.

Hiked up the Divide Camp Trail after a night camped at the trailhead. It was clear at midnight, but misty when I started up the trail. At PCT, I turned off my headlamp, turned right/south, and walked in a gloomy misty dawn. The first creek crossing didn't look enticing. Low flow, clear water (no glacial silt), and it forked at the PCT crossing, so I'd have to pick one. I kept going on the PCT, tried this and that, nothing looked like a worthy adventure.

I turned back north on PCT, pondering whether I should just spend my day trail hiking. Back at my first snubbed creek, I realized I didn't have to pick one; I could ascend in between them. I suspected they met again upstream, thus forming an island. I was right. At the top, I found a campsite, and a faint trail that I had missed (maybe under snow).

From the top of the island, I saw a big outwash plain, with braided creeks. So much for a simple creek hike up a defined drainage. The canyon off to my right looked biggest, so I headed over there. Discovered that was where most of the water was coming from.

As I got up into the canyon, it narrowed and steepened. It got slightly tricky, but no big deal. Main problem was fragile snow bridges (last season's leftover snow with a few inches of fresh), and a lot of unstable rocks.

Rather abruptly, the canyon took me into a huge flat-bottomed glacial valley, with moraines looming on either side. Routefinding was easy, especially with better snow coverage. The creek was now gently meandering.

It looked like the head of the valley would be a dead end, but no, a surprise: The creek veered right and climbed up to a bowl. That was it. Creek went under ice, and the only remaining exploration opportunities would require a lot of time/effort. I had plenty of both, but not in this weather!

To the north (left side when facing the mountain) I heard another creek, and was tempted to descend that way, but it was too risky. Only later, looking at the map, did I realize it was a fork of my creek. I don't know how I missed it both ascending and descending.

By the time I got back to the canyon mouth, visibility was terrible, and there were many braided creeks here. I decided to veer aggressively right, towards Adams Creek. I knew it would be impossible to cross that creek without knowing it, and it wouldn't be possible to cross PCT without noticing, so I knew I'd be okay. Still, it was unsettling walking blind in unknown terrain. I became increasingly nervous. Finally, I was elated to reach a trail. I foolishly believed it to be the unofficial trail to the island campsite. Rather than descend to PCT, I ascended to confirm. In a minute, I came to the familiar PCT/Divide junction. Had I opted to take the trail down, I would have reached Adams Creek shortly. I was shocked at how far off I was, but no harm done, it was where I needed to get eventually. I had looked forward to rewalking the section of PCT from Divide trail to the creek that I ascended, but that's okay. With a little break in the weather, I sat on a rock and had lunch. Just for fun, I checked to see if maybe my phone could find me. Yep, it did, which means I made all that a little more difficult than necessary, but that's part of the fun.

Regarding the weather, I wasn't too upset about poor visibility all day. In a canyon/valley route, much of the appeal is immediate scenery, not the big views. And it was fun waiting for the occasional breaks to see where I was. Physically, it wasn't too miserable. My main complaint was the inability to safely explore and look for loop options.

Later, looking at maps/photos, I was a little surprised I was able to figure out where I had been. There were enough distinctive features that I confidently say I know where I was. Another surprise: I had no idea I was exploring the upper reaches of the Lewis River. I figured it was just some random no-name creek.

Looking up from the island. My route went up into the canyon way over on the right,

Watch your step! Those are holes in a snowbridge over my creek.

The Divide/PCT junction isn't super easy to spot, so I circled in red.

Question mark is approximate high point, hard to be sure exactly.

Re: Adams: Headwaters of Lewis River

its a nice area to explore.

imo looks better w/o the snow 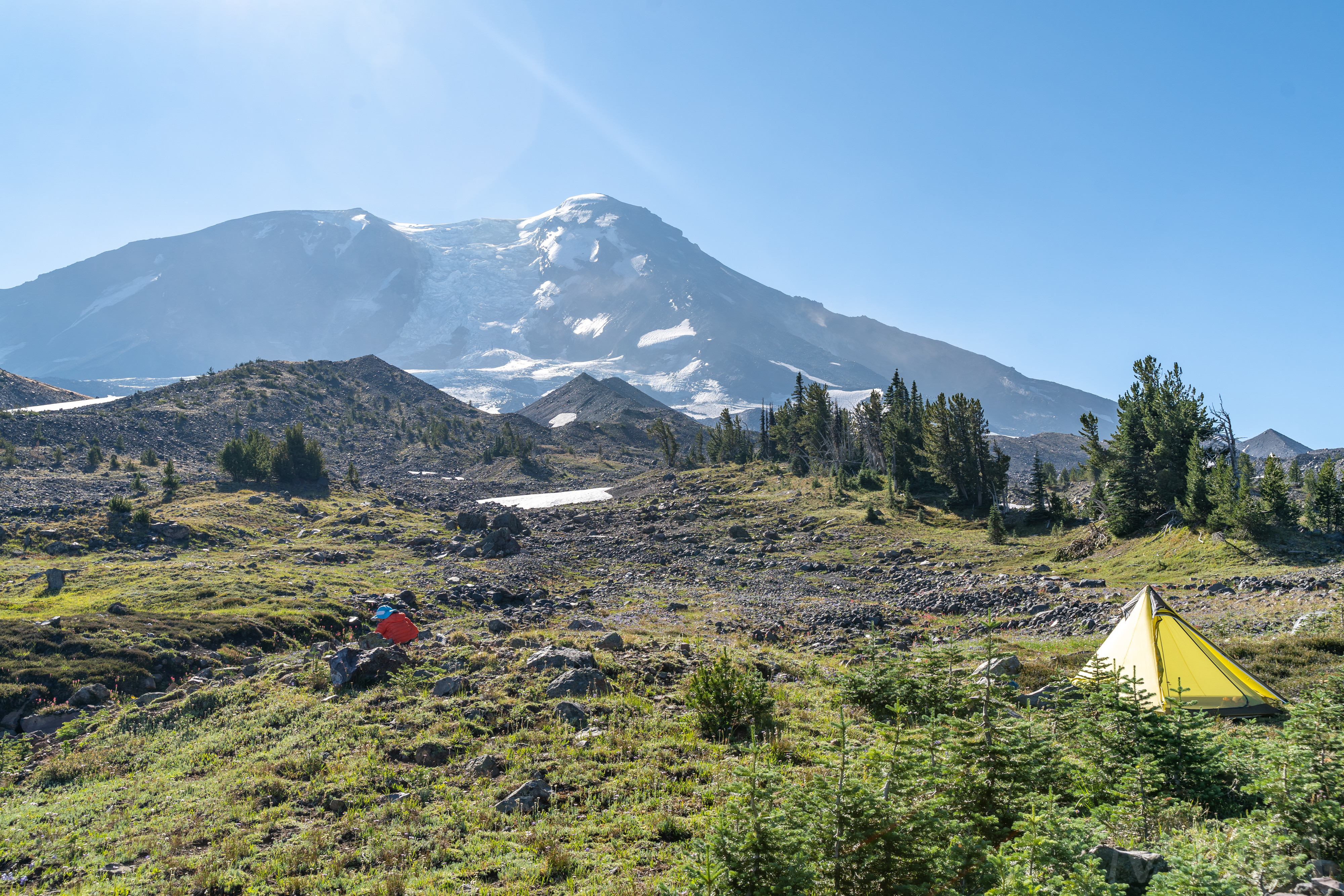 Re: Adams: Headwaters of Lewis River

imo looks better w/o the snow

I guess I'll have to go back later. Darn