Having never been to the Mt Jefferson area, I talked my girlfriend, and her son (both of whom had never really gone backpacking) into hiking into Jefferson Park with me from Breitenbush Lake via the PCT. We left my car down by 3 Fingered Jack off the Santiam Hwy, so I could get more miles in, and they wouldn't have to suffer as much as I seem to enjoy.

We hadn't researched the road from Detroit to Breitenbush and how terrible it was. If we had, we might have changed plans, but I'm glad we didn't!

We got to the Breitenbush Lake TH around 330 PM, and prepped, and took off around 4 PM. The 3 miles up to Park Ridge were easy for me because both of my compatriots took lots of breaks, and so the climb wasn't too bad. The view was pretty amazing when we got to the top. 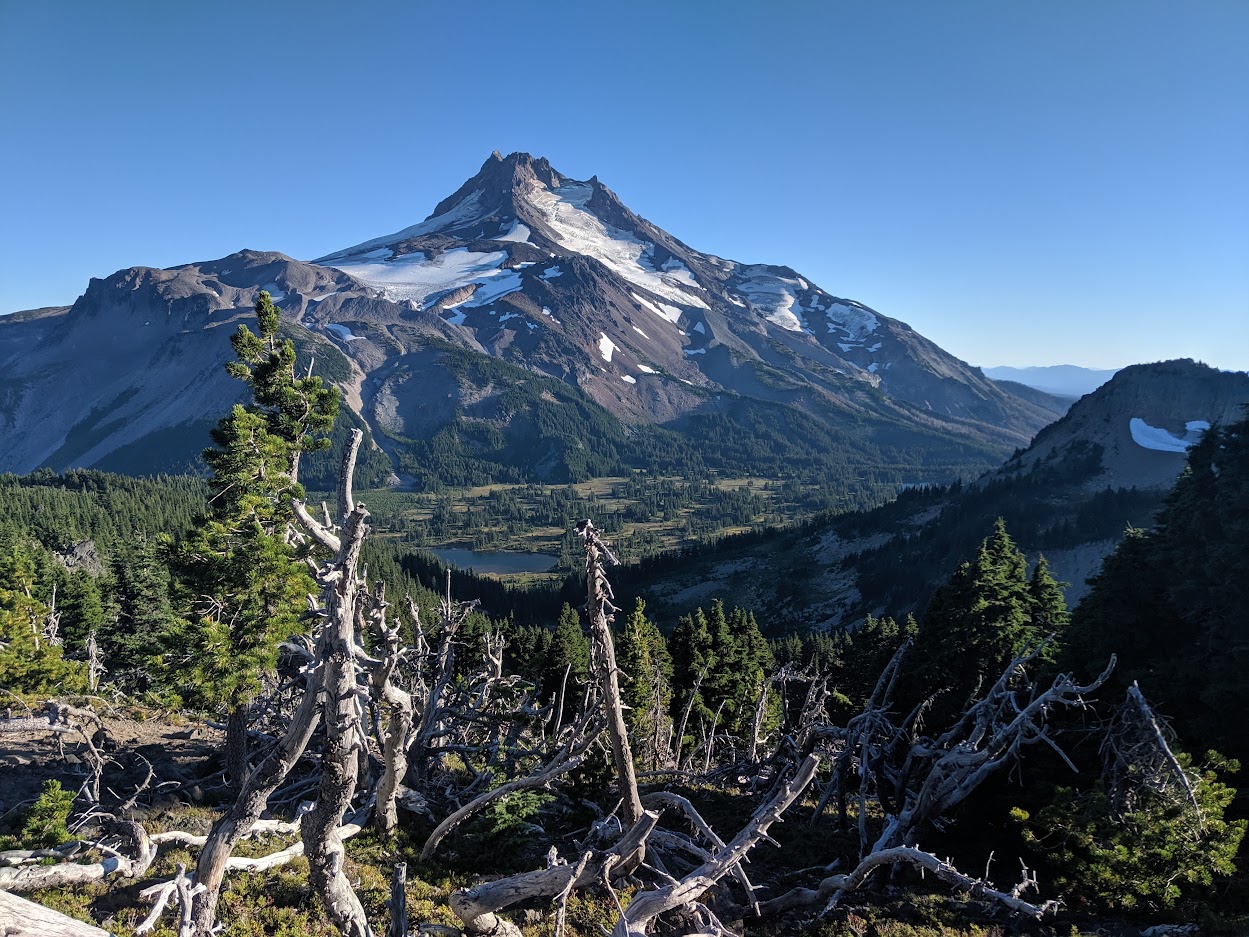 We camped down by Russell Lake. We were around that magic 250' ring, but it was just hard packed soil near the trail surrounded by trees. We got there around 7:30, so the hike down went pretty smooth, but slow. 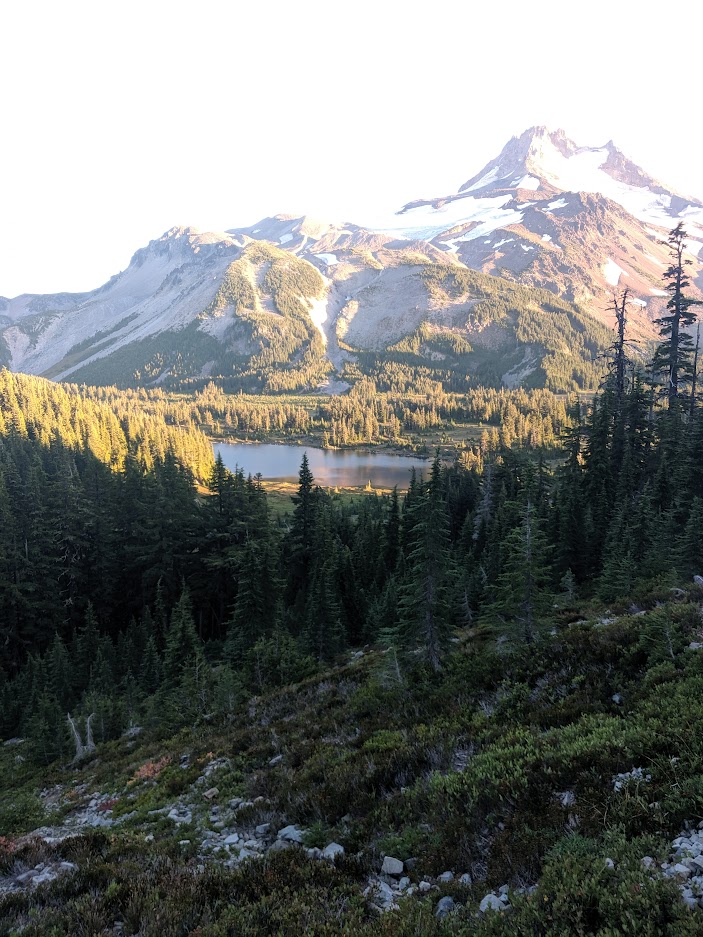 The next morning, we loitered around camp for a few hours, where I was antsy for hiking, but did my best to get some good photos in, and be a cooperative boyfriend, so they weren't scared off from my interests. 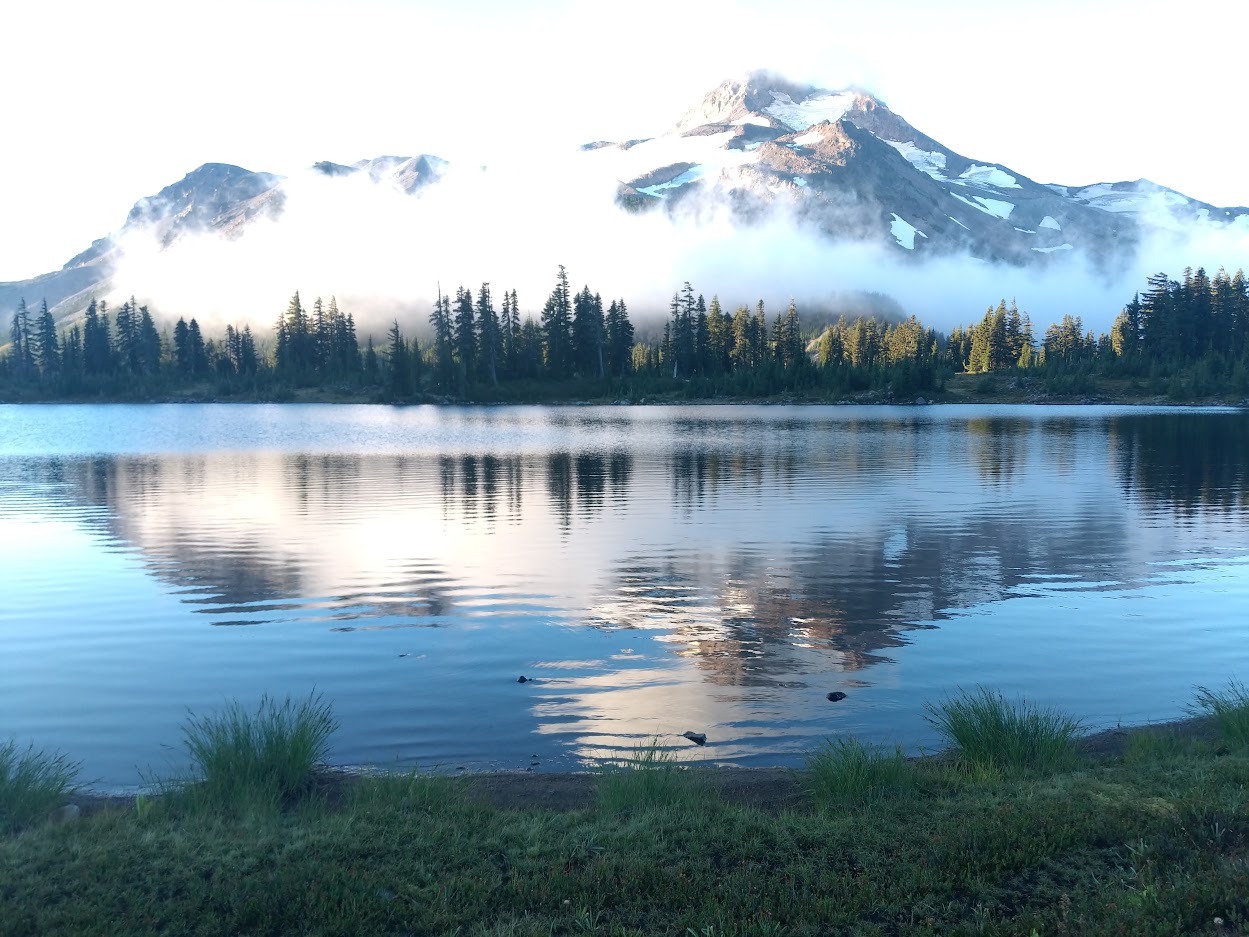 After leaving them around 9:30, I bombed down the first few miles until I hit a nice creek, admired the sound, the sight, and the solitude. Crossing it was easy as can be, though, I did have trail runners and trekking poles, so I just walked across the 18" deep water that was 6-8' feet wide. Plenty of good imagery in the burnt out section between Pamelia Lake and Whitewater Creek. This seemed to be where an avalanche(?) trashed all the trees in a very noticeable streak. 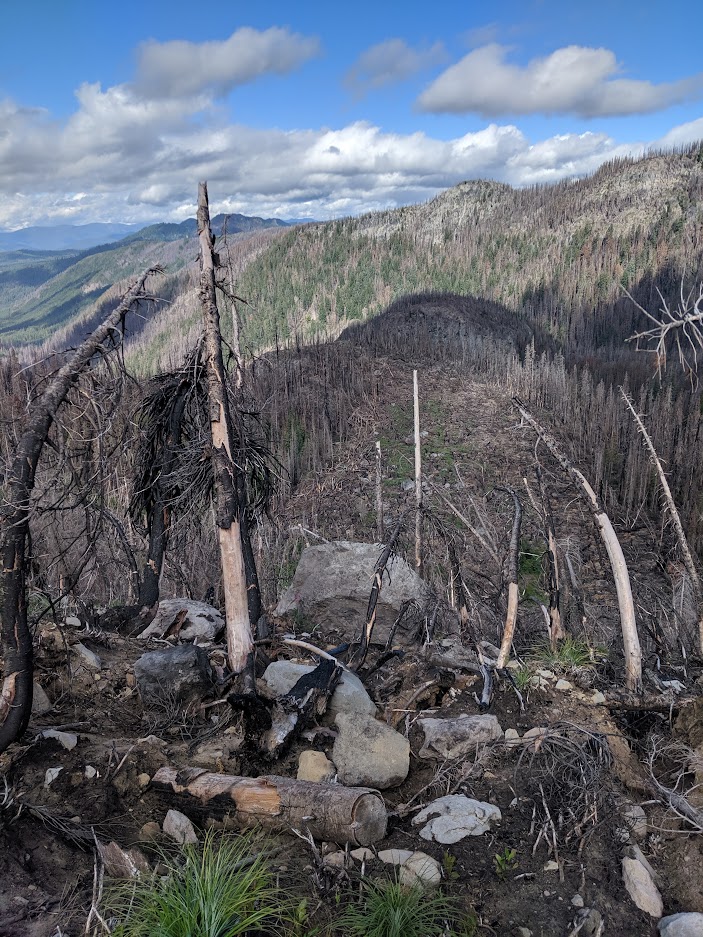 After climbing up from the Milk Creek/Pamelia Lake area, I hit Coyote & Shale Lakes, and there was water, and I took a nice afternoon siesta and cameled up. Most of my pictures seem to be of water, but theres lots of other pretty features too I swear. 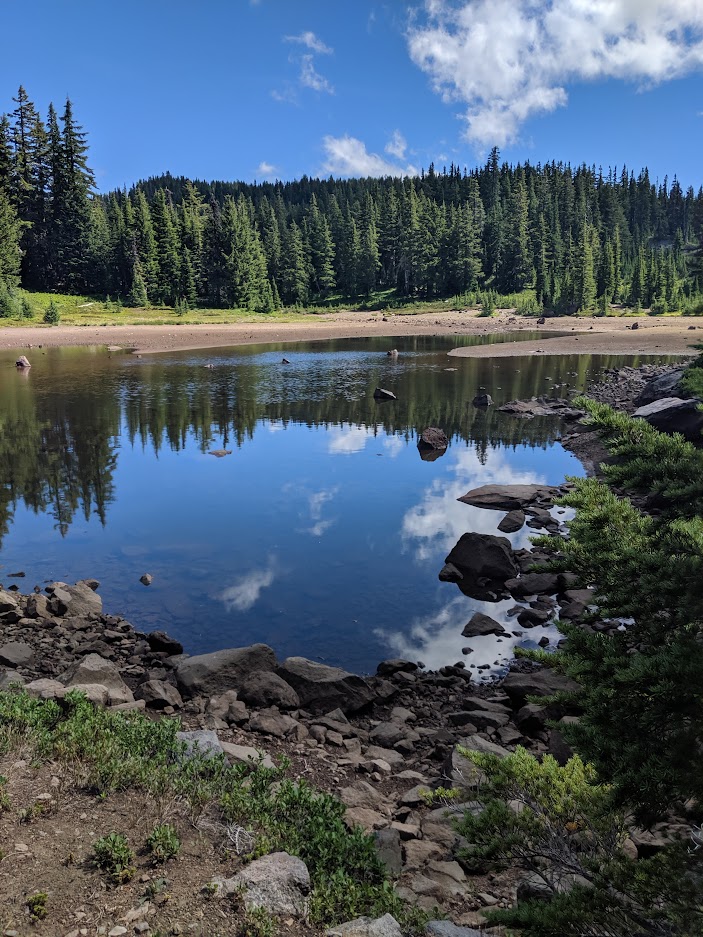 After climbing a little bit more, I saw some impressive campsites on Cinder Butte(?) that looked back on Jefferson. From this photo, the table is visible on the right, and the giant cliff face isn't visible. If you can pack in extra water, these spots would be amazing, but if you're not planning for it, its 4-6 miles to water downhill each way to it, so be aware. Plenty of impressive views from the ridgeline between Mt Jefferson & Jack. But here is a photo of some lava rocks, and some bleached white trees. 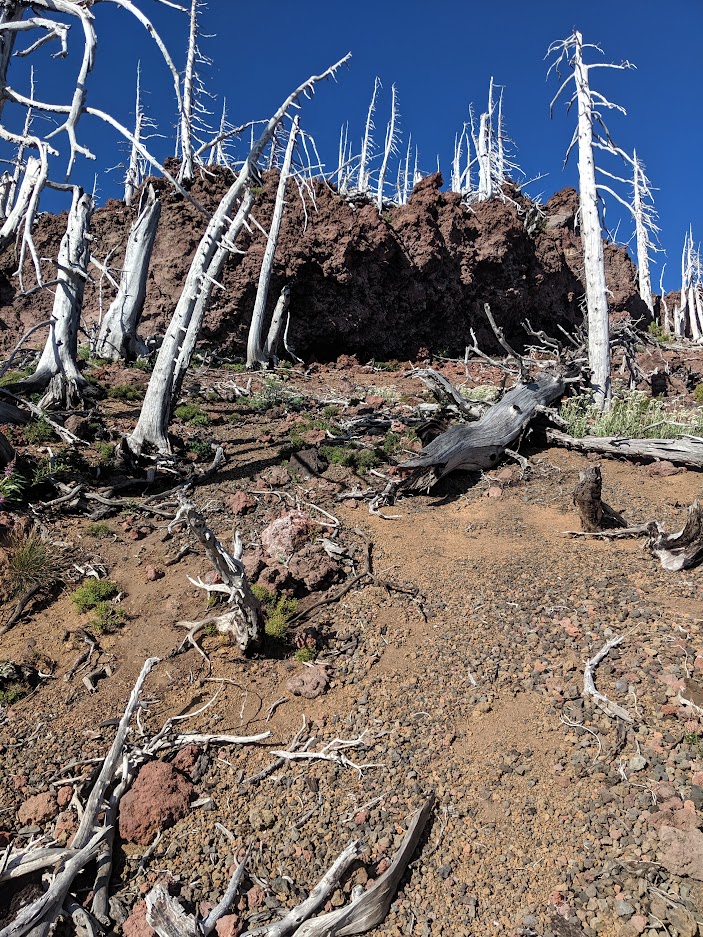 Yet another gorgeous view in the middle of nowhere. I ended up camping at Rockpile Lake on Sunday night. After having done approximately 20 miles between 9:30 when I left them, and 7:30 when I strolled into camp. I promptly fell asleep. I've already been to 3FJ a couple times, and probably posted a bunch of those pictures on other trip reports, so here is a picture of my shoes from the parking lot. The last like 4 miles coming down from 3FJ was super dusty and quick. At this point on Monday, I wanted to get home and relax. 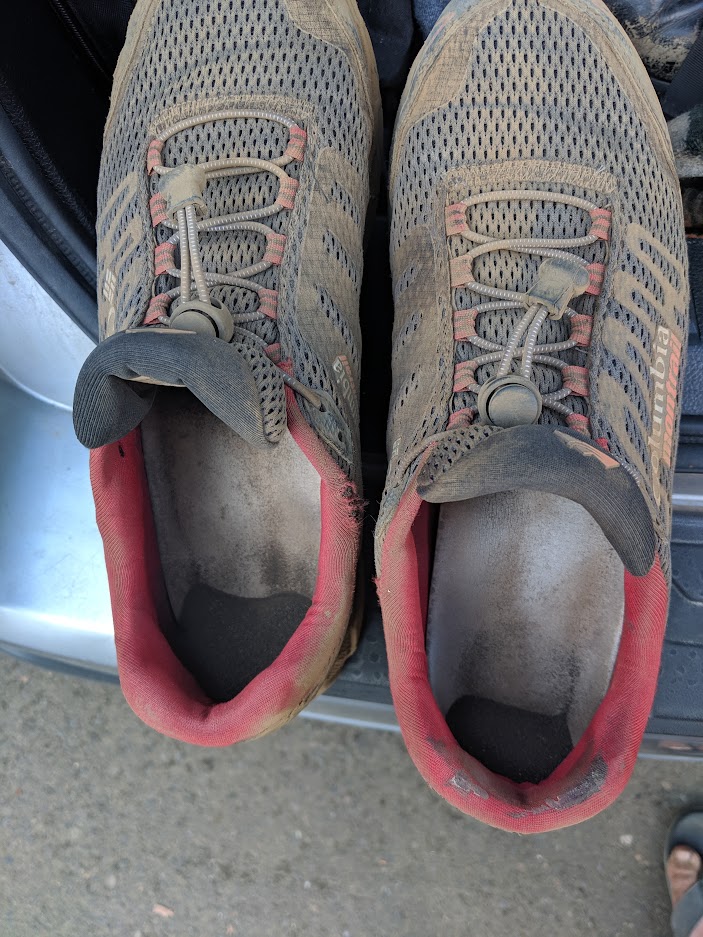 No bugs anywhere on the trip. No mosquitos, flies, etc etc. Water was plentiful for the first half, but the second 20 miles, the water options Shale Lake & Rockpile Lake & Koko Lake & the 3FJ TH hiker cache. I rarely went more than an hour without seeing other people, so, with a greater concentration around Jefferson Park, and next to the TH at Jack. There were rangers in the park giving people tickets/making them relocate for those who had set up their camps right next to 'closed for rehab'. Nice they're trying to keep the crowds respectful of the area. None of the stream crossings were sketchy (the only 2 notable I think were Milk Creek and Russell Creek, and both were fine). Plenty of open campsites south of the Park, even with the "crowds". Definitely was warm in the afternoons, and cool at night, but nothing froze, and nothing was too hot to walk in. Lots of easy cruising sections interspersed between the uphill grinds. About 7800 down and 7400 up overall as per Halfmile maps on the 38 miles between Breitenbush Lk and Santiam Hwy, so about a 7% slope overall, with plenty of good views, plenty of hard miles, and plenty of time to get sweaty and dirty.

I have tons more pictures if there is anything in particular anyone is interested in. Otherwise, happy trails!
Last edited by buckwheat on September 8th, 2019, 7:02 pm, edited 1 time in total.
Top

Nice trip, thanks for sharing! There is some beautiful hiking in the Mt. Jefferson Wilderness, although it's sad that such a huge percentage of it has burned, mostly from the 2003 B&B Fire and the 2017 Whitewater Fire.
Top

While they aren't the same forests they used to be, I do enjoy walking through the occasional forest fire scar.
A. you get to see a lot of the topography that would normally be hidden.
B. you get a lot of views that would normally be hidden.
C. watching the plants that come back one year, two year, three years, ten years, twenty years, down the line feels intriguing to me.
D. watching the amount of life that flourishes around a stream or drainage in a burnt out area, and how it slowly spreads.

Obviously human caused wildfires are terrible for their own unnatural reasons, however the natural fires that turn and evolve and effect the ecosystems every so often do serve as a useful function. They just don't operate on the human timescale, they care more about the hundreds of years rather than the 10-50 that most of us will be hiking around in the woods for, and I have to tell myself that when I find myself fretting too much about a forest burning down that its probably happened dozens or hundreds of times before, I just haven't been around to witness it. Still sucks when you are familiar with a place and want to go enjoy it, and its no longer there anymore. Sigh.
Top

Nice report! Have never seen that southern section before, really cool ya saw rangers actually handing out fines. I'm still convinced that's the only way to get the majority of people to camp respectfully in areas where they belong. I wonder if they could make up for most budget short falls simply by fining the people that continually break the rules: "I didn't know, I didn't see the sign, I _______ (spin the wheel / excuse)" We have a good number of people that have never really been held accountable so nice to see the rangers actually doing something about it for once. I still think odds in seeing a bear > odds in seeing a forest ranger (endangered species act didn't cover them apparently

There's also some neat scramble routes up the mt around Pamelia I've been thinking of exploring, so thanks for posting the photos!
Top

If anyone wants to scroll through like 100+ photos from this hike to see more of what is out there and get a better feel for everything, rather than just the like 10 photos I posted in my report, I just dumped all the photos I took on a google album.

Lots of them that look like nothing are just a campsite off the PCT or neat change in plants/terrain as I go up or down in elevation.

Thanks for sharing Buckwheat. I very much enjoyed your photo album, including all the campsites!!

I've been curious about the TFJ area and you've literally given insight.

FWIW, your photos did not display in your Oregon Hikers report, and I'm glad they didn't 'cause that led me to follow the link to your photo trove.

Thanks for the heads up Burnside. This was the first time I've tried using google for hosting, and I must have messed up the sharing permissions on it. I think I made it work now.
Top
Post Reply
7 posts • Page 1 of 1