A friend and I spent four days hiking the loop around South Sister. We originally had intended to hike the entire Three Sisters Loop, but a few recent trip reports led us to change our plans in order to avoid some of the Pole Creek Burn on the northeast section of the traditional loop and to include the trail between South Sister and Middle Sister via Camp Lake and the Chambers Lakes. We also took a relatively short detour along the west side of our loop to check out Linton Meadows. We decided to save the Obsidian Area for another day.

DAY 1
After a hearty breakfast in Sisters at the Cottonwood Café (highly recommended!), we arrived at the Pole Creek Trailhead around 9:30 Thursday morning. (Although within the burn, we decided to begin at Pole Creek to minimize the distance from the trailhead to the loop trail.) The burned area around the entrance to the Three Sisters Wilderness, while intense, was somewhat better than I had expected with a number of green trees standing (not shown in the photo below). 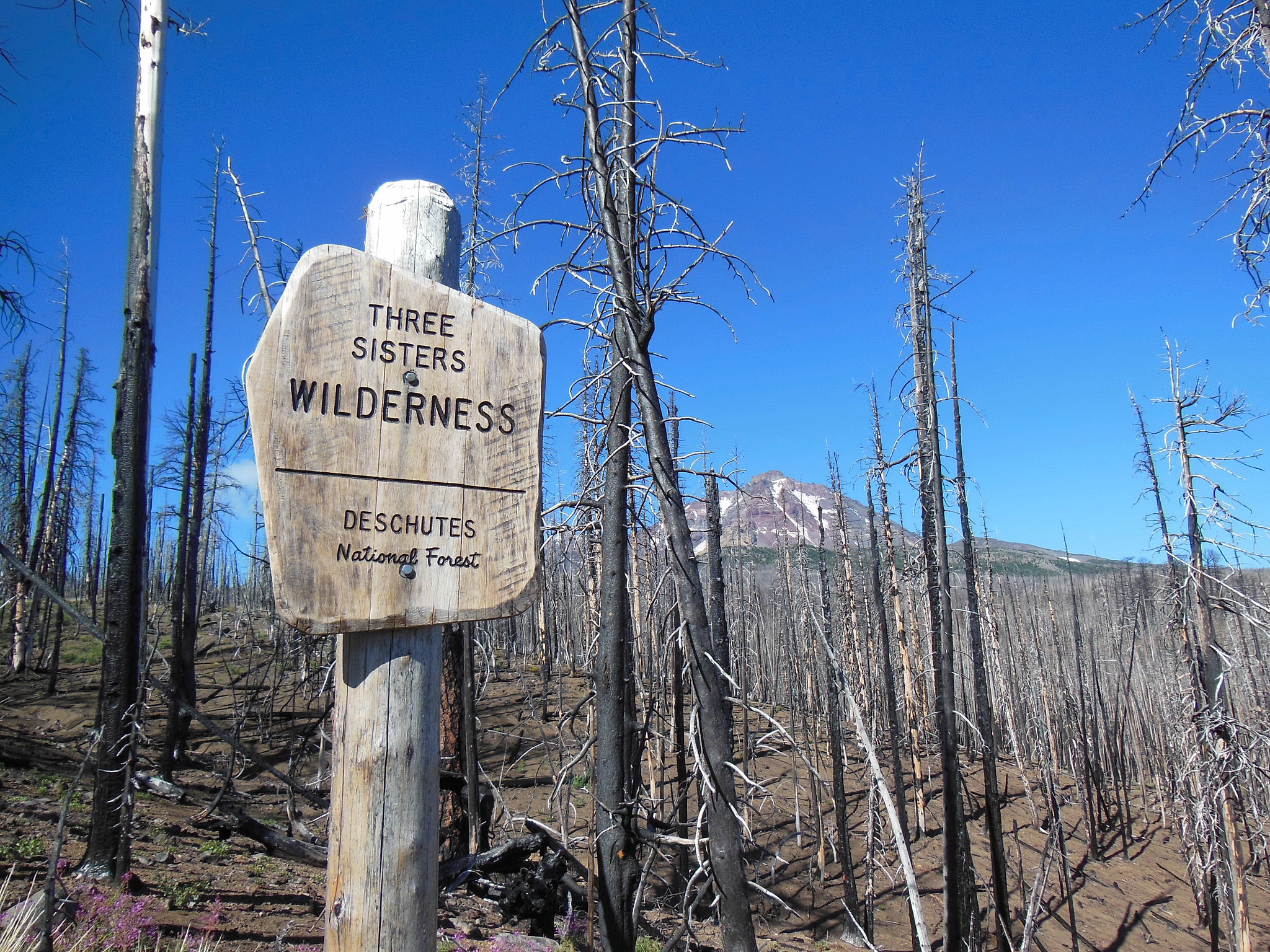 We turned off the main trail after a few miles and several (bridged) stream crossings and hiked up a well graded path toward Camp Lake, shortly leaving the burn behind. The views of the mountains really began to open up and the lake - crystal clear and turquoise in the sunlight - was spectacular. 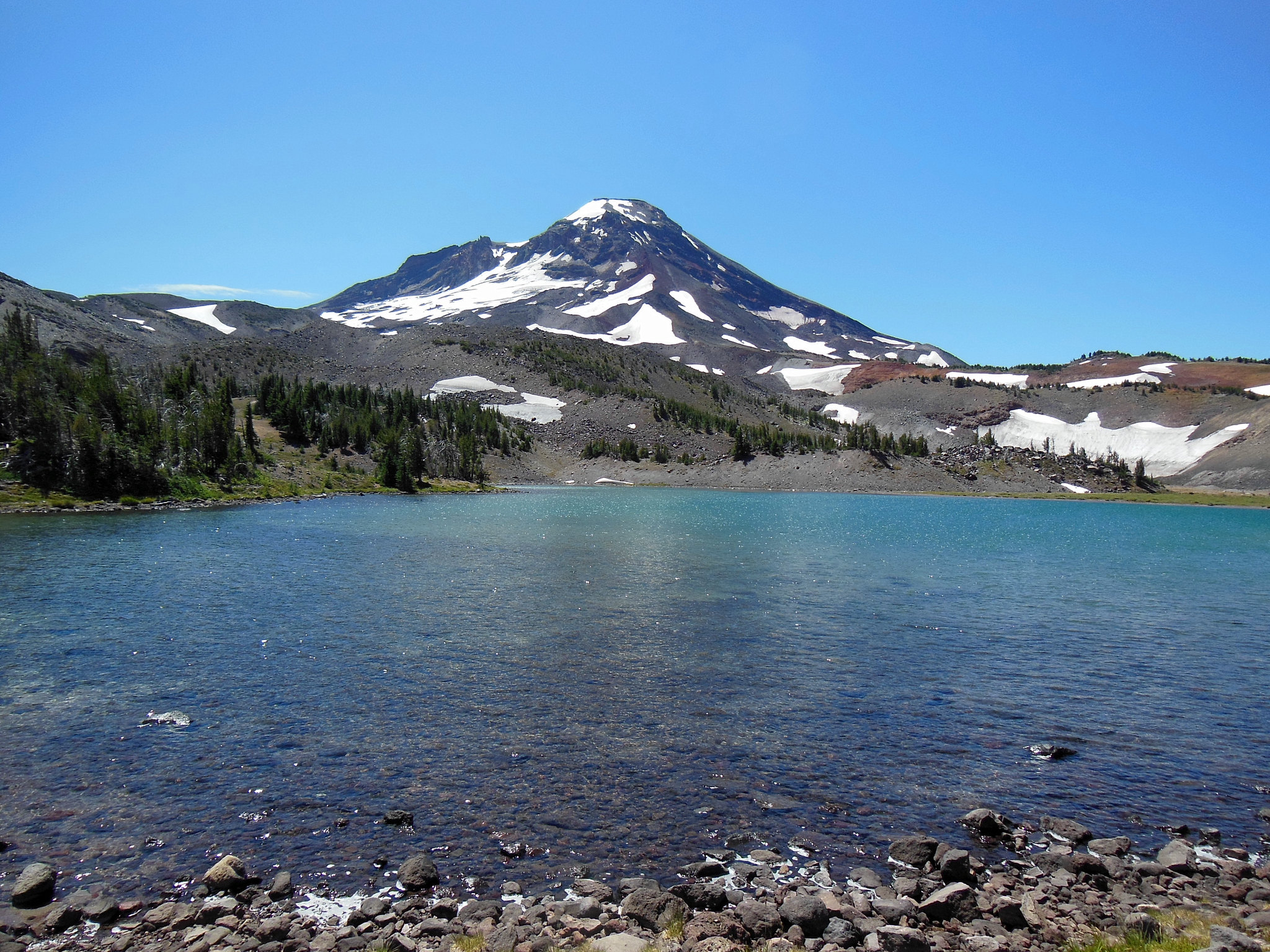 After a quick lunch, we headed up the unofficial use path to the Chambers Lakes. 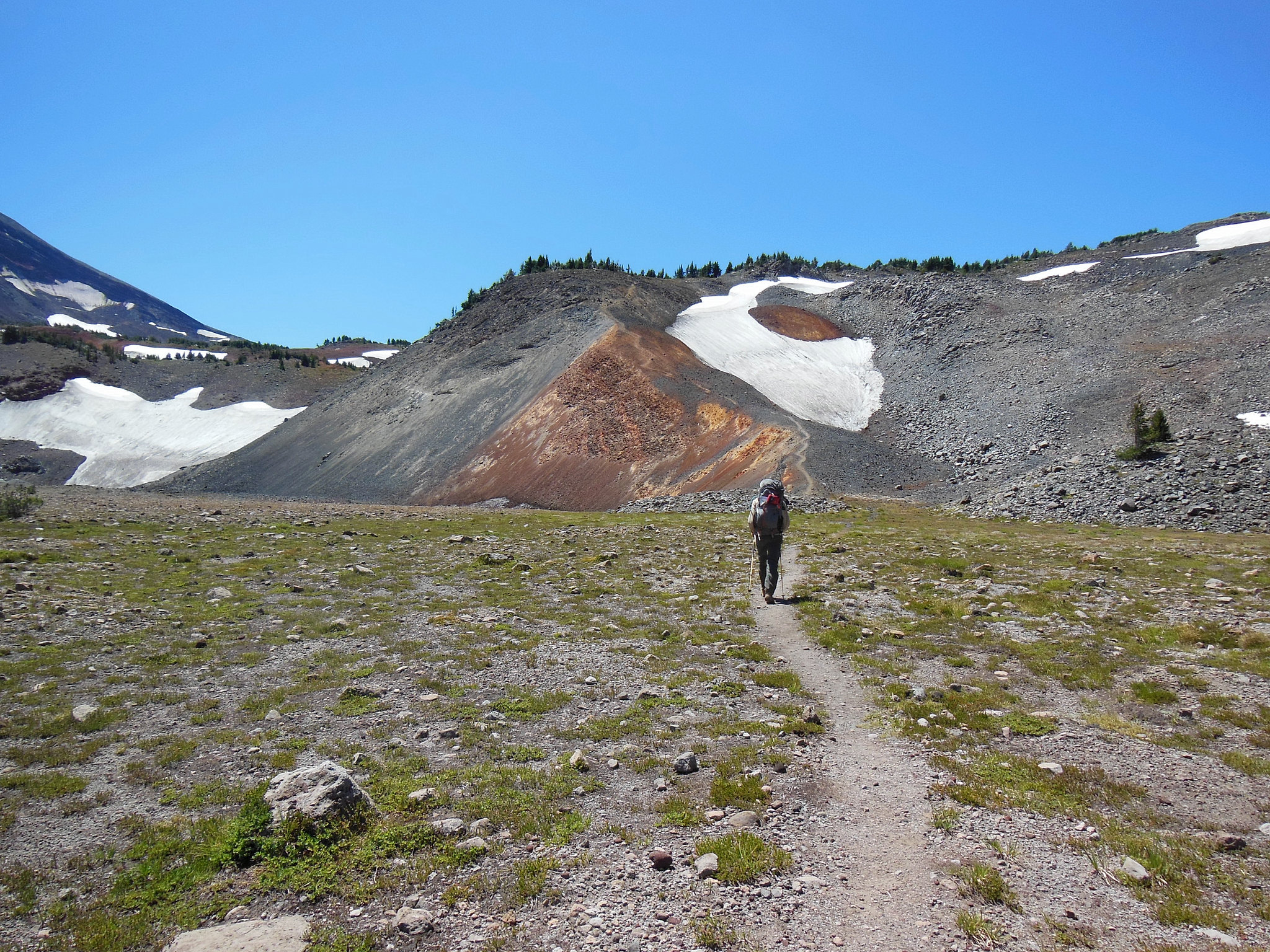 The trail was easy to follow most of the time, with just a few short sections of boulder hopping where intermittent cairns were helpful. The area around the Chambers Lakes is very barren, but also geologically quite interesting. 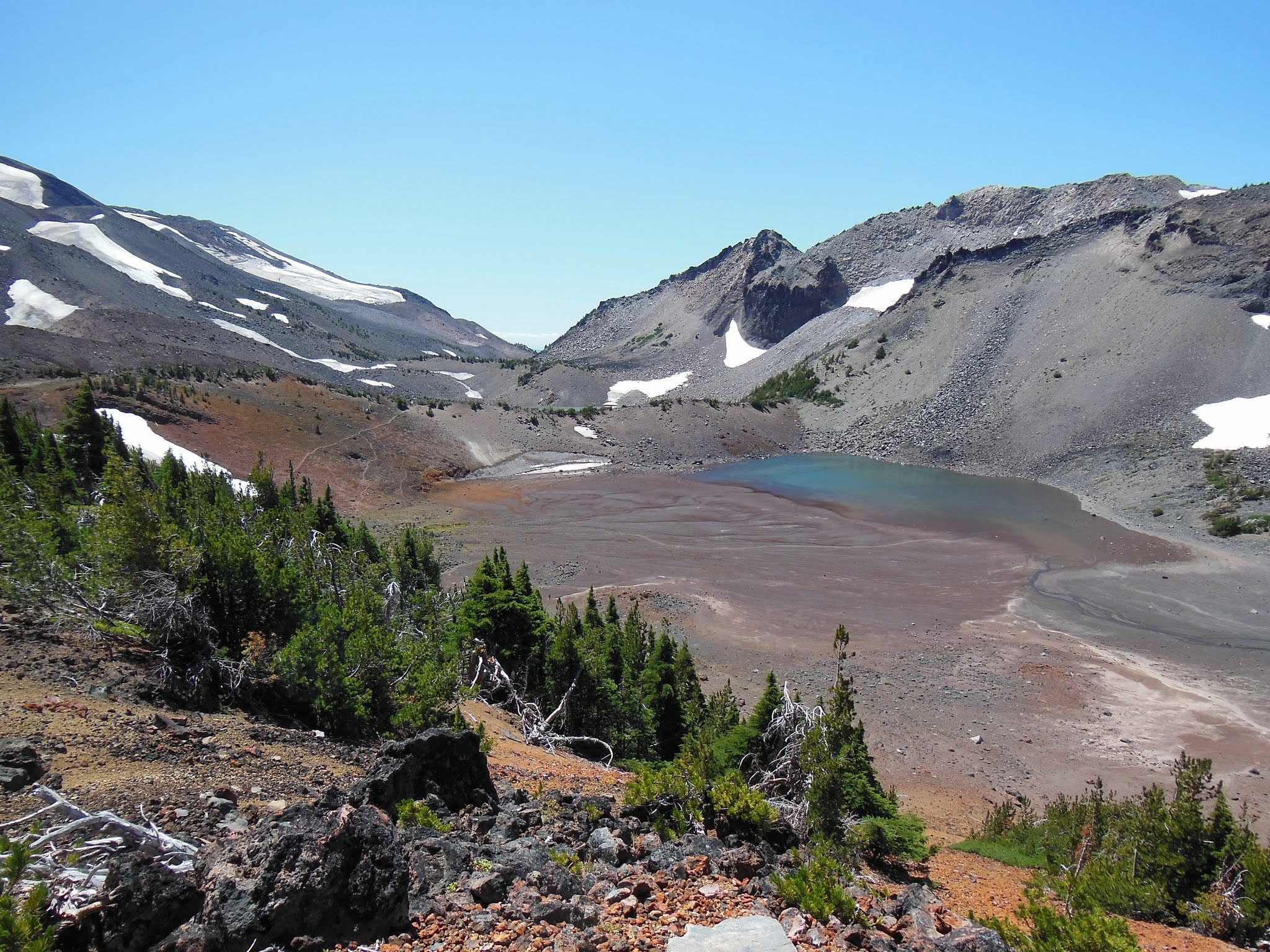 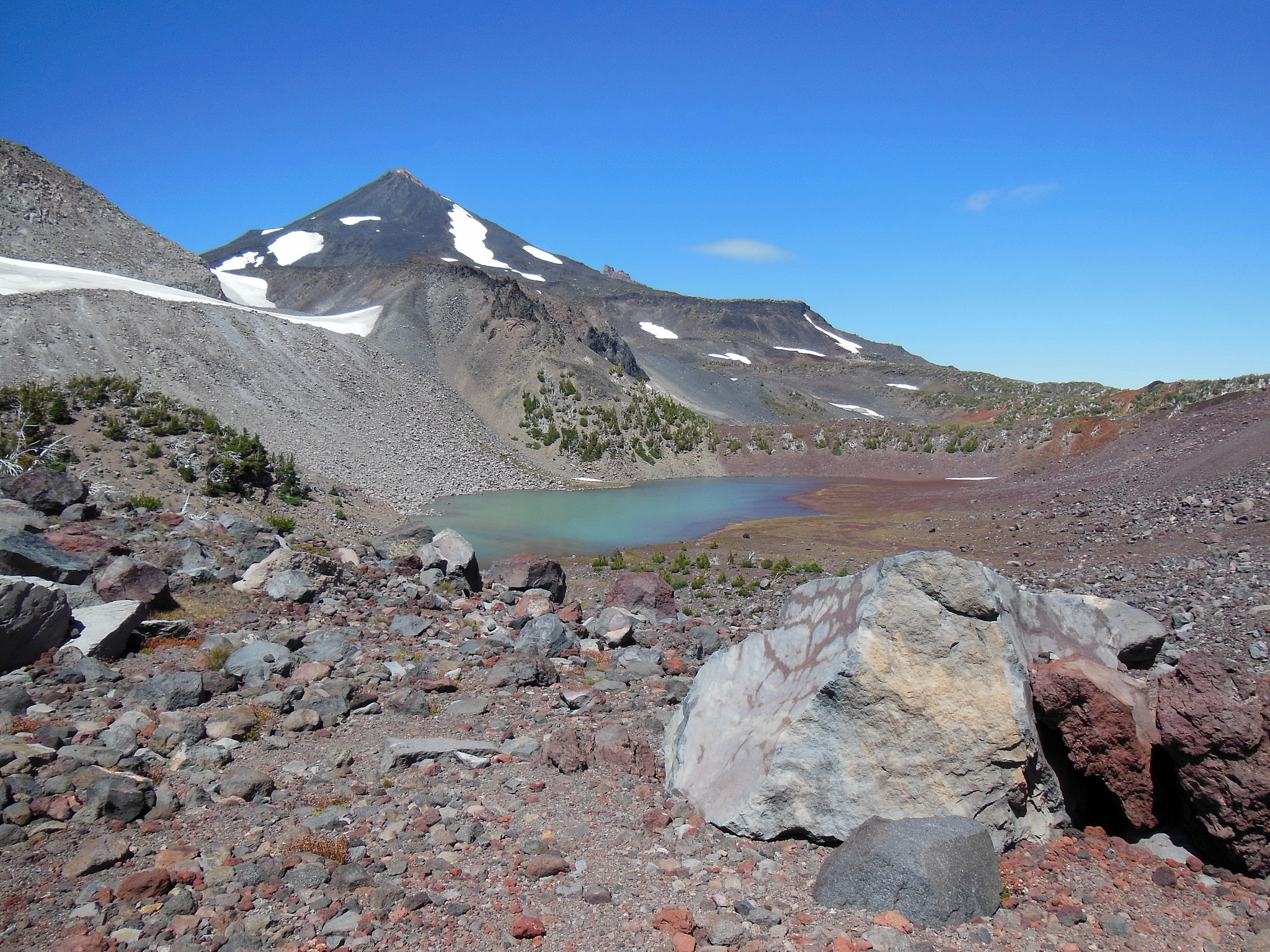 South Sister and Middle Sister were our constant companions and the wind was gusty at times.

After cresting the pass, we hiked down through the Separation Creek drainage. The trail was rather steep in places and we were pleased that we had chosen to hike that section from east to west. During our descent, we witnessed a very interesting phenomenon. Shortly before 3:00 pm, we came upon a dry creek bed and saw water coming down from above; Separation Creek was forming before our eyes! We watched for a few minutes, during which it grew from a muddy trickle into a legitimate stream. We decided to challenge the creek to a race, which we won handily because it had to fill every pool on the way down the hill. Here is a photo of Separation Creek filling its dry creek bed: 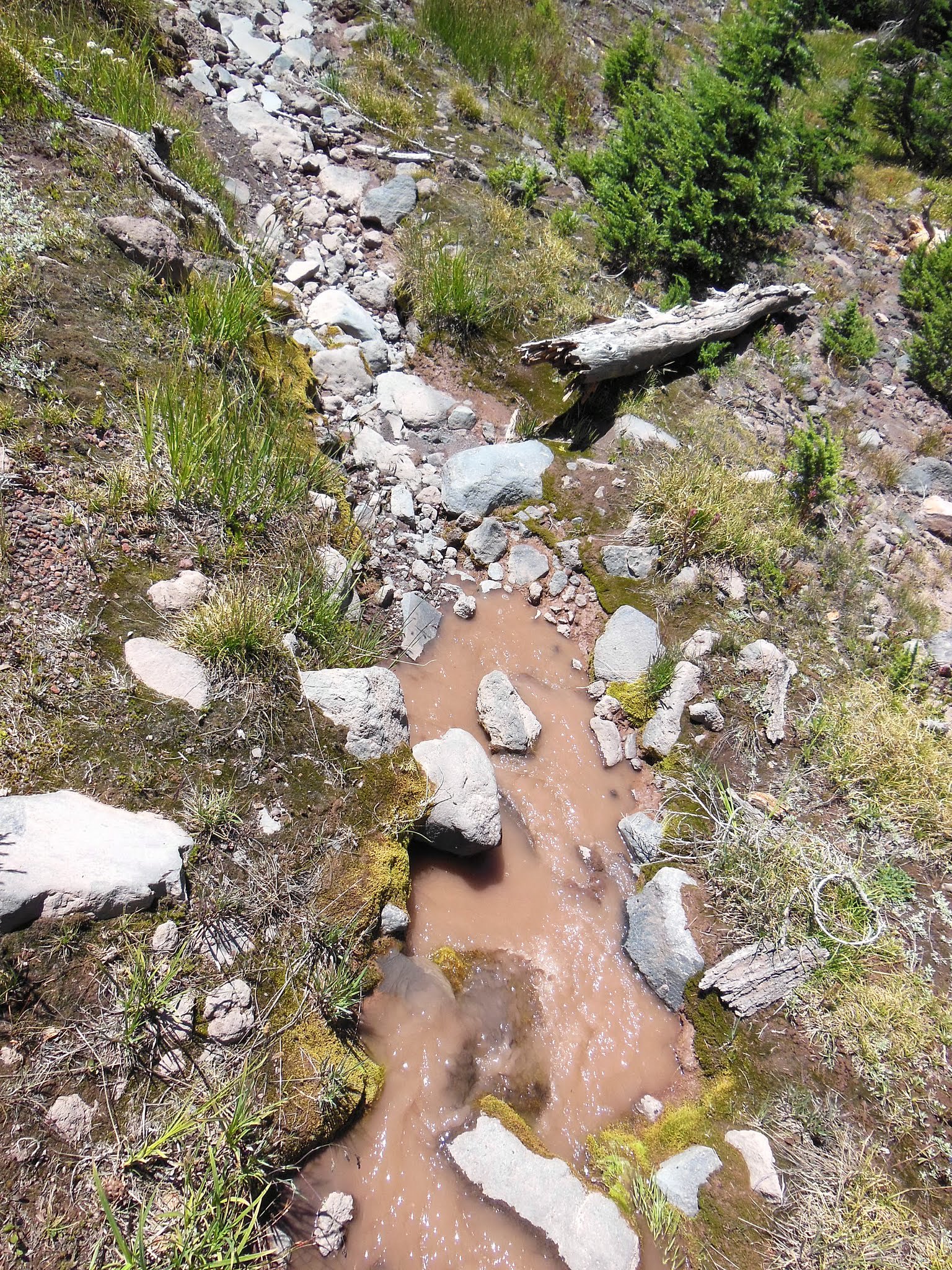 When we crossed back over Separation Creek (around noon the next day), there were still substantial pools of water in the creek bed near the PCT, though it wasn't flowing. I suppose this explains why Born2BBrad saw a dry creek bed in the afternoon but water flowing in the early morning (viewtopic.php?f=8&t=22233&start=10); in this very dry year, the creek just takes a long time to work its way down the mountain, dries out, and then does it all over again when the sun begins to melt the snow up above the next day. We proceeded down through relatively dry meadows to the PCT, where we turned north and enjoyed some ripe huckleberries as we passed Reese Lake.

Our intention was to head for Linton Meadows, but we were uncertain whether we would find water there. Lacking the energy to explore the meadows that day, we decided to bail out and instead headed for Husband Lake. We found plenty of water and a private campsite on the lake's eastern shore, and were treated to nice views of South Sister from the opposite side. 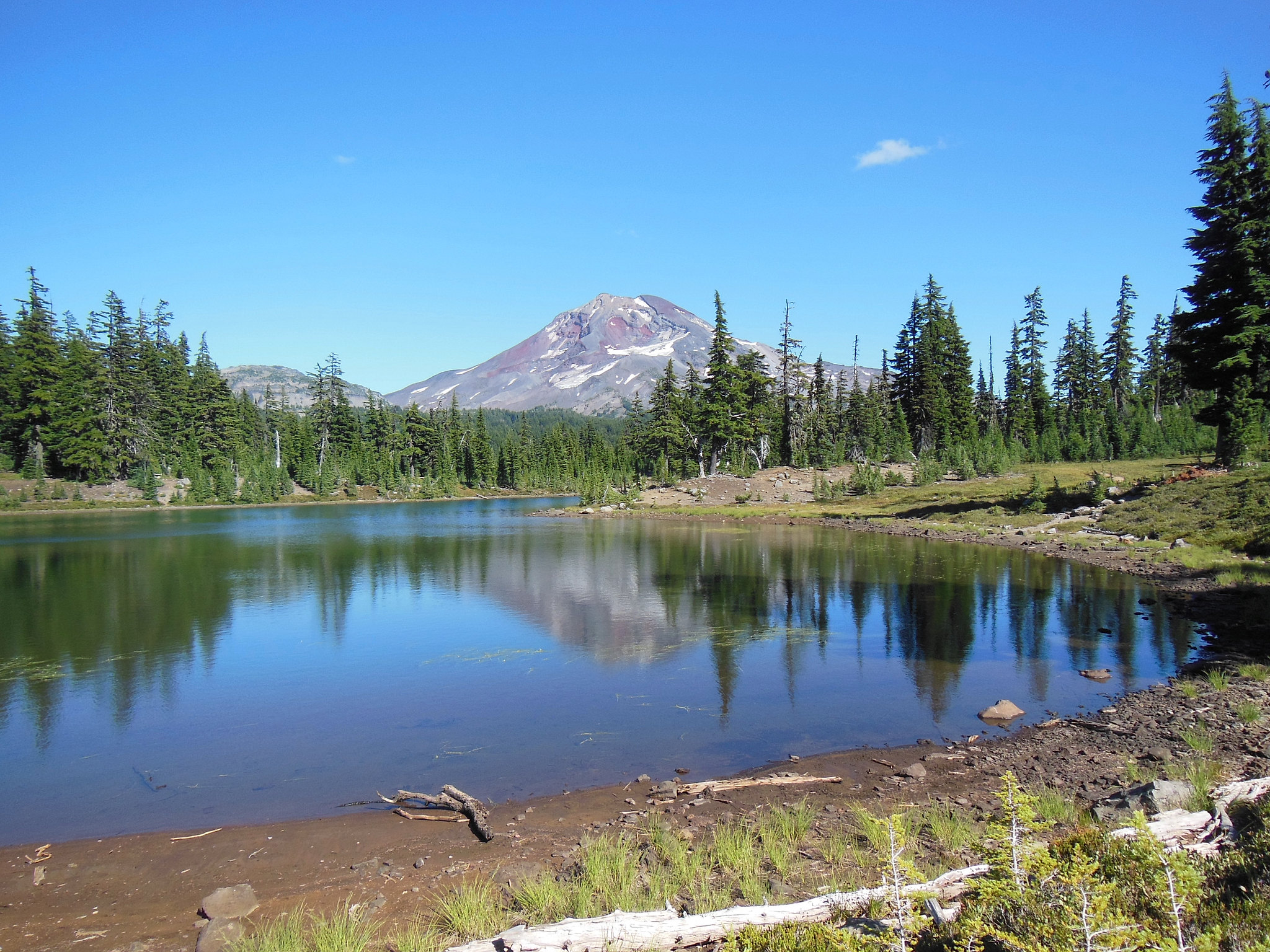 DAY 2
The next morning, we first headed to Eileen Lake, which was populated by a ridiculous number of baby frogs! (Sorry, but I didn't take any photos, though derwooddynk posted some in a recent TR (viewtopic.php?f=8&t=22323).) We tried our best to avoid stepping on any of them, but it wasn't easy because they blended in so well.

Thereafter, we walked down into Linton Meadows. The meadows were very dry and looked as I imagine they might in late-August or even September in most years. However, the stream running through the meadows was gushing even by mid-morning. 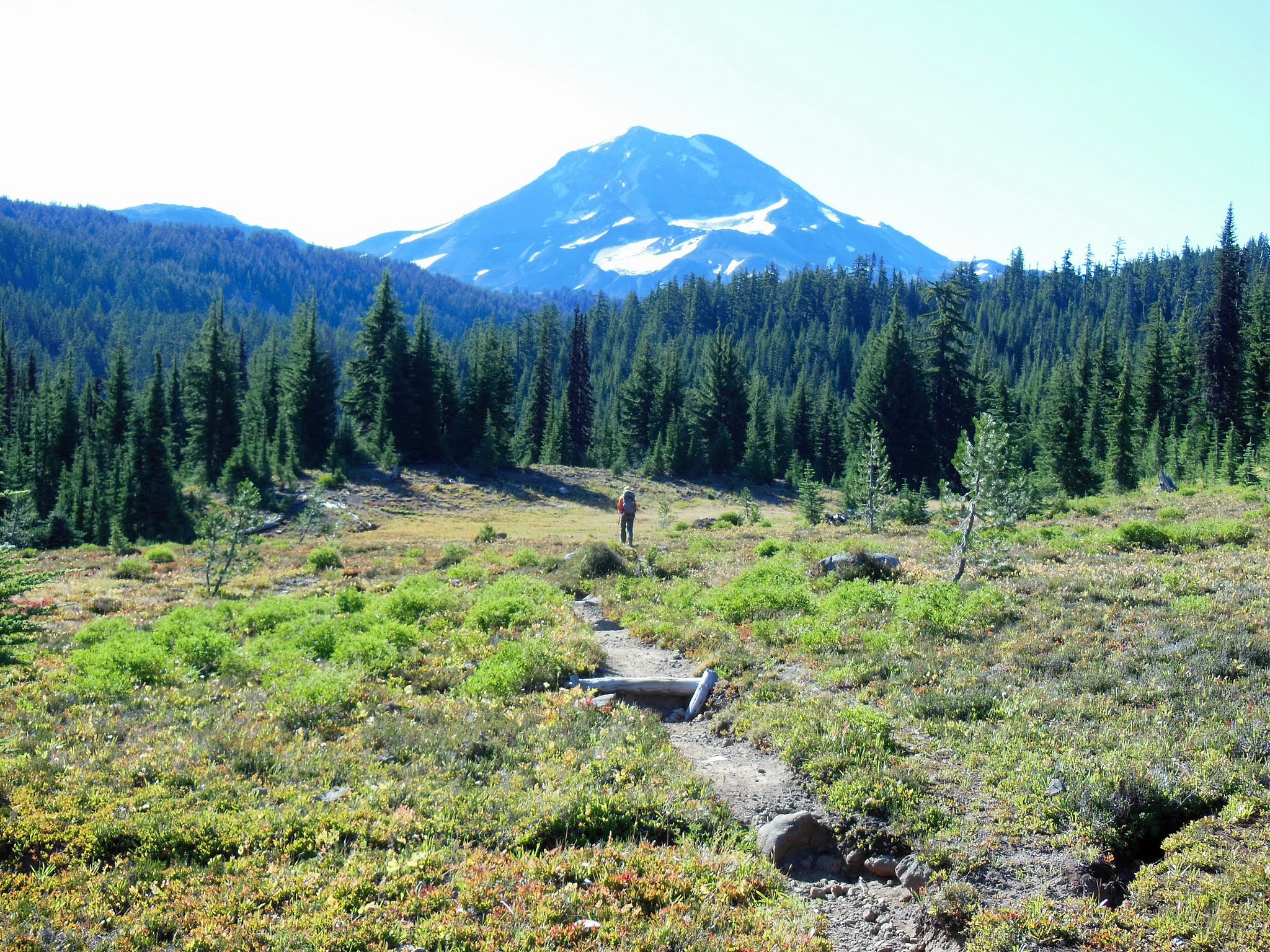 After admiring the meadows, we skirted their north edge and switchbacked up to the PCT. We headed south, eventually passing the point where we had intersected the PCT the previous day and completing our mini-loop around Linton Meadows. Once on the PCT, we passed a number of thru-hikers headed north and enjoyed hearing their stories and marveling at their beards. Eventually, after hiking through several miles of forest and meadows, we crossed Mesa Creek.

Awhile later, we passed the huge rock mesa and emerged onto a barren pumice-covered plain. It was like walking across a desert, interesting for the first mile or so but then a bit monotonous. 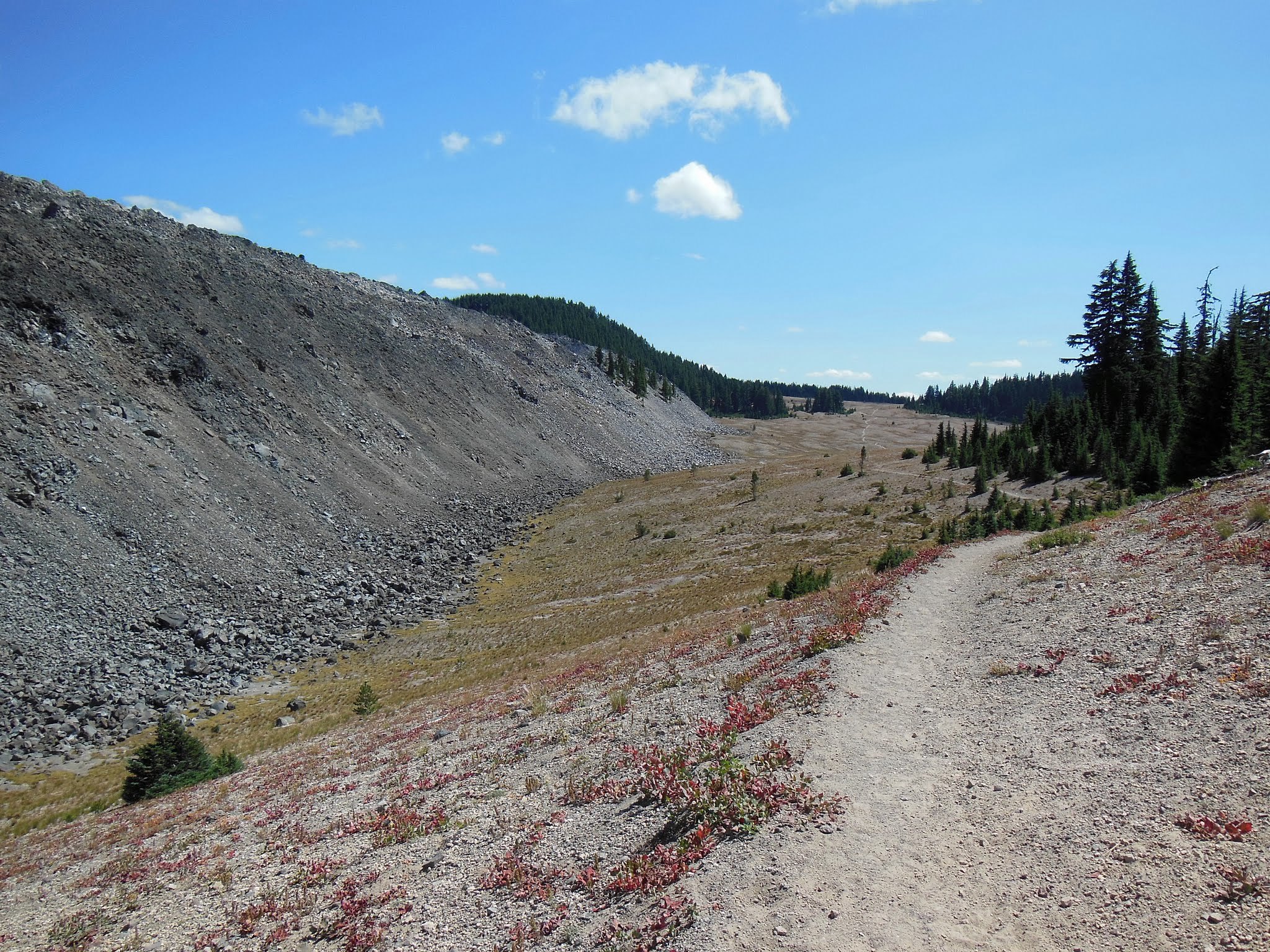 Rather than try to push on toward Moraine Lake, we decided to call it a day and headed for Sisters Mirror Lake instead, which proved to be an excellent choice. After setting up the tent at a site on the south side of the lake, we set off to explore the surrounding area, which included a number of even more scenic lakes. (Had we known, we might have camped at one of them.) In ordinary years, I imagine this area would be a haven for mosquitoes in late July, but I think I only saw one in an hour or so. 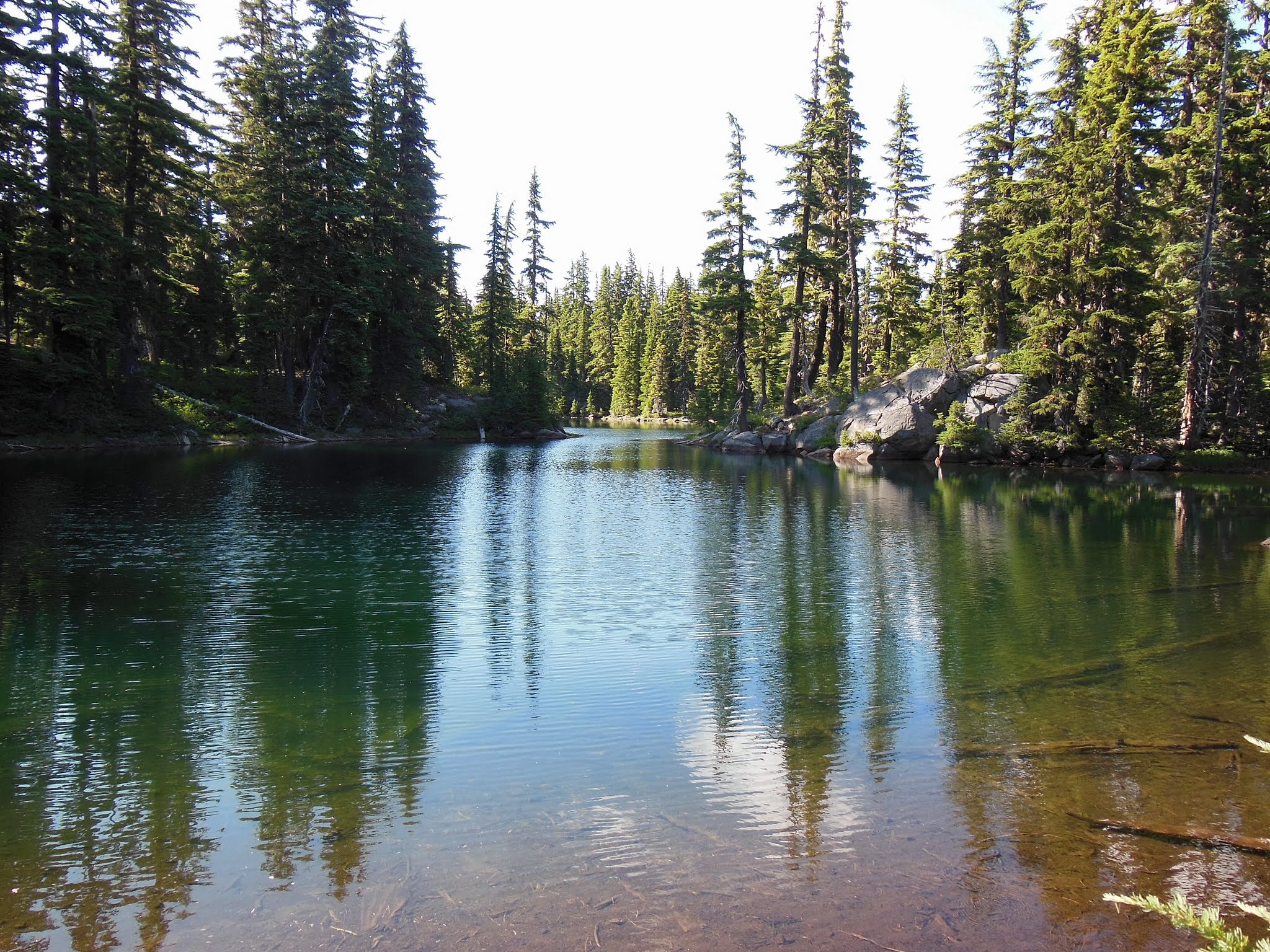 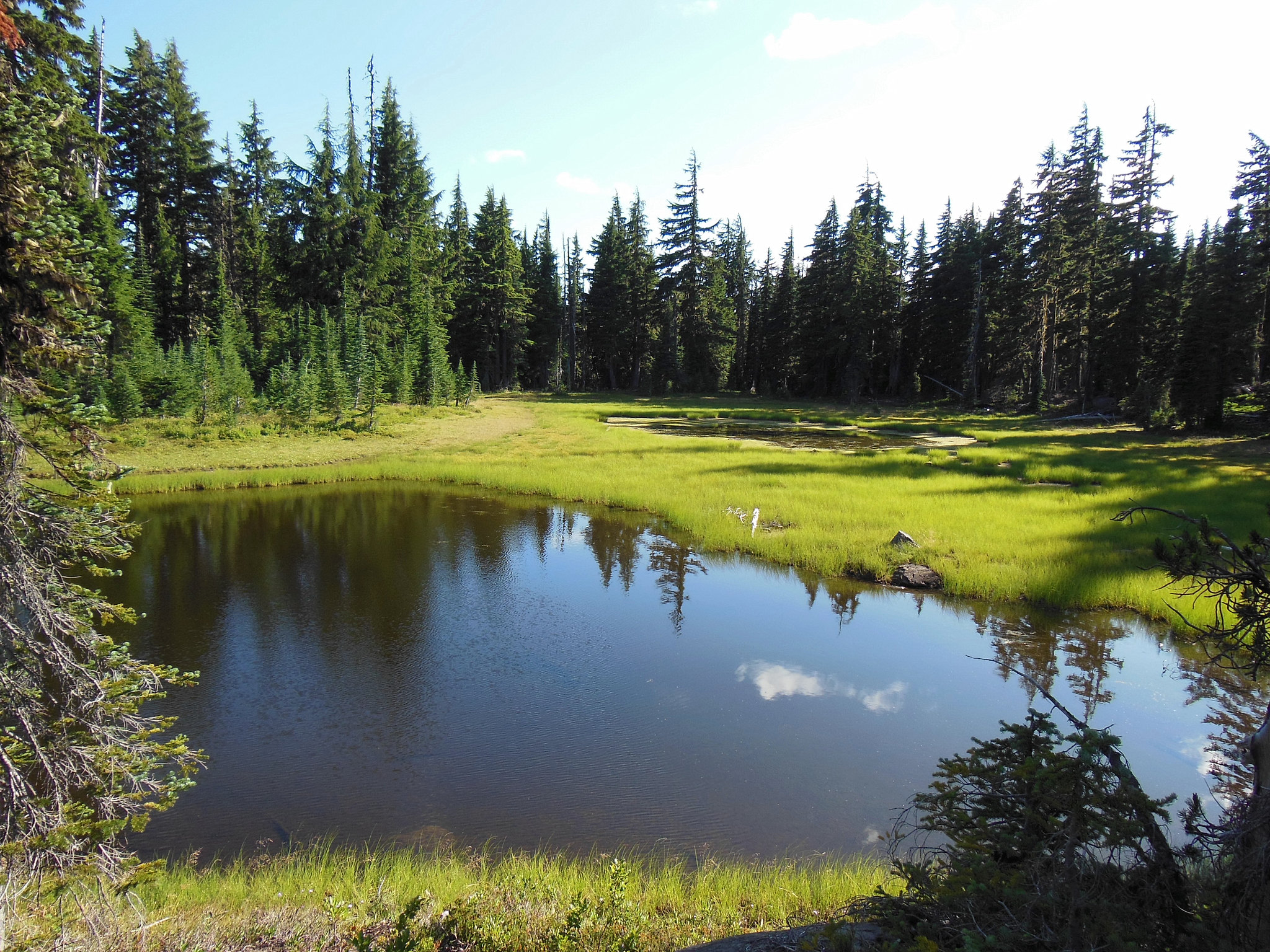 We certainly weren't alone at Sisters Mirror Lake, but folks were generally quiet and we enjoyed a nice sunset before retiring.

DAY 3
On Day Three, we set out through the woods and climbed to Moraine Lake. It was overcast and relatively breezy, so we were surprised to see several parties beginning the "climb" up South Sister; I'm not sure what they hoped to see up there, as the top third of the peak was completely socked in and remained that way throughout the day. 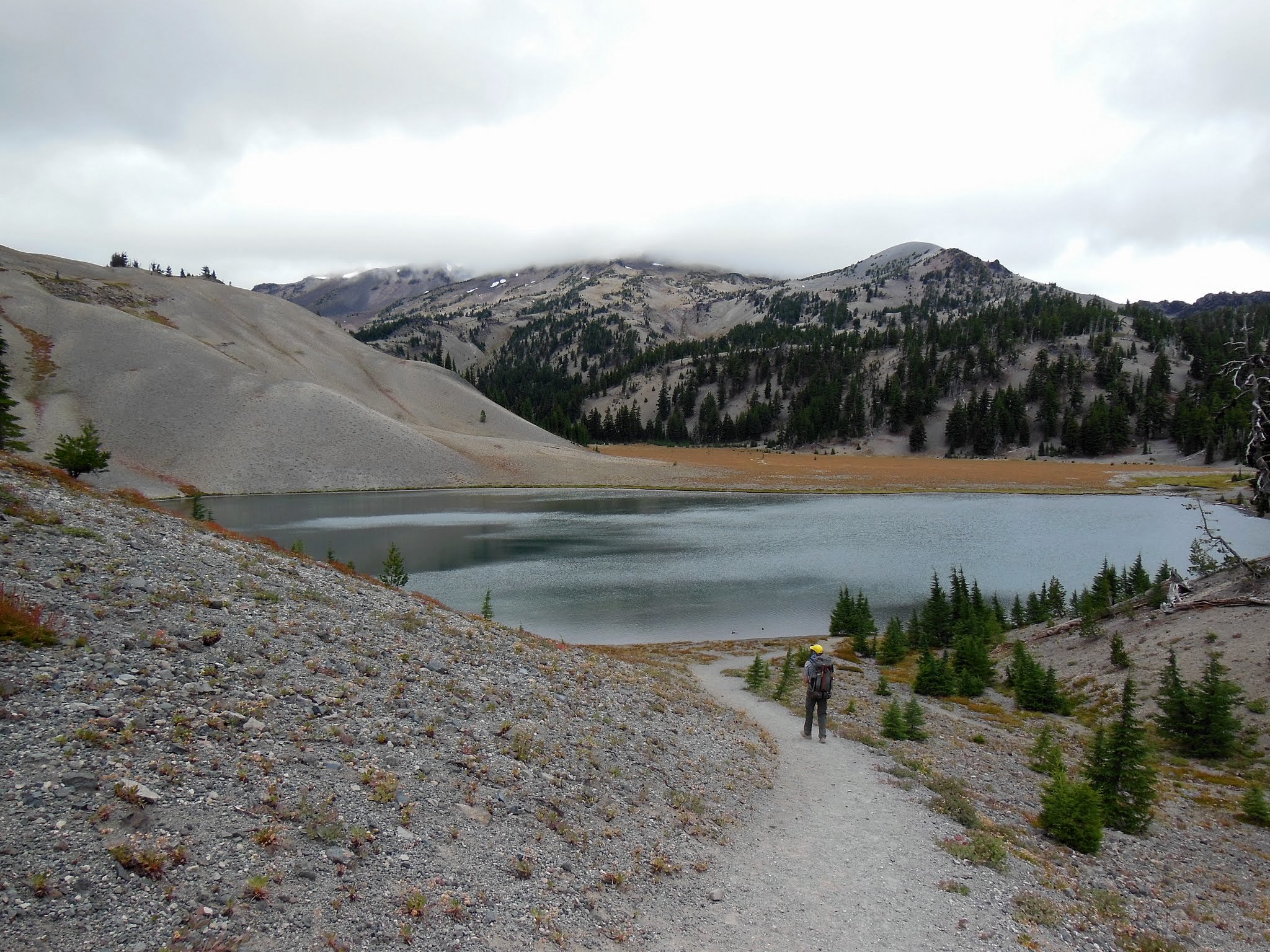 After two days of relative solitude, we were awed by the hordes of day hikers and trail runners after turning on to the Fall Creek Trail. I had heard the Green Lakes area was popular, but it felt like we were on a highway at times! Fall Creek itself was lovely, however. 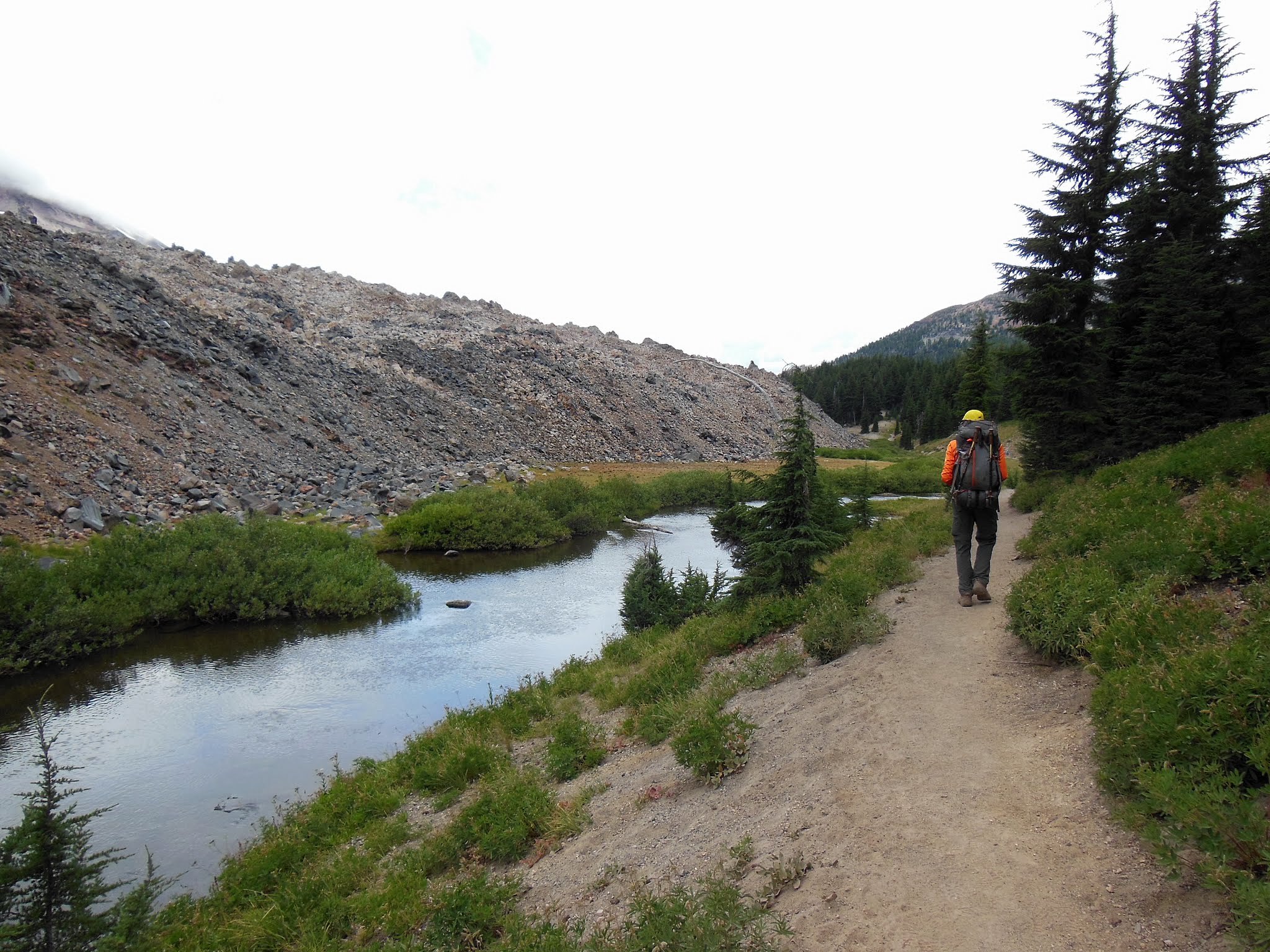 Interestingly, once in the lakes basin, most folks appeared to head straight for a peninsula jutting out into the largest lake before turning back, not bothering to check out the rest of the area. We left the masses behind and hiked through the basin among the lakes. It was a pity the weather wasn't nicer, as I'm sure it's spectacular on a sunny day. At least the lakes were still able to show off a bit of their namesake color. 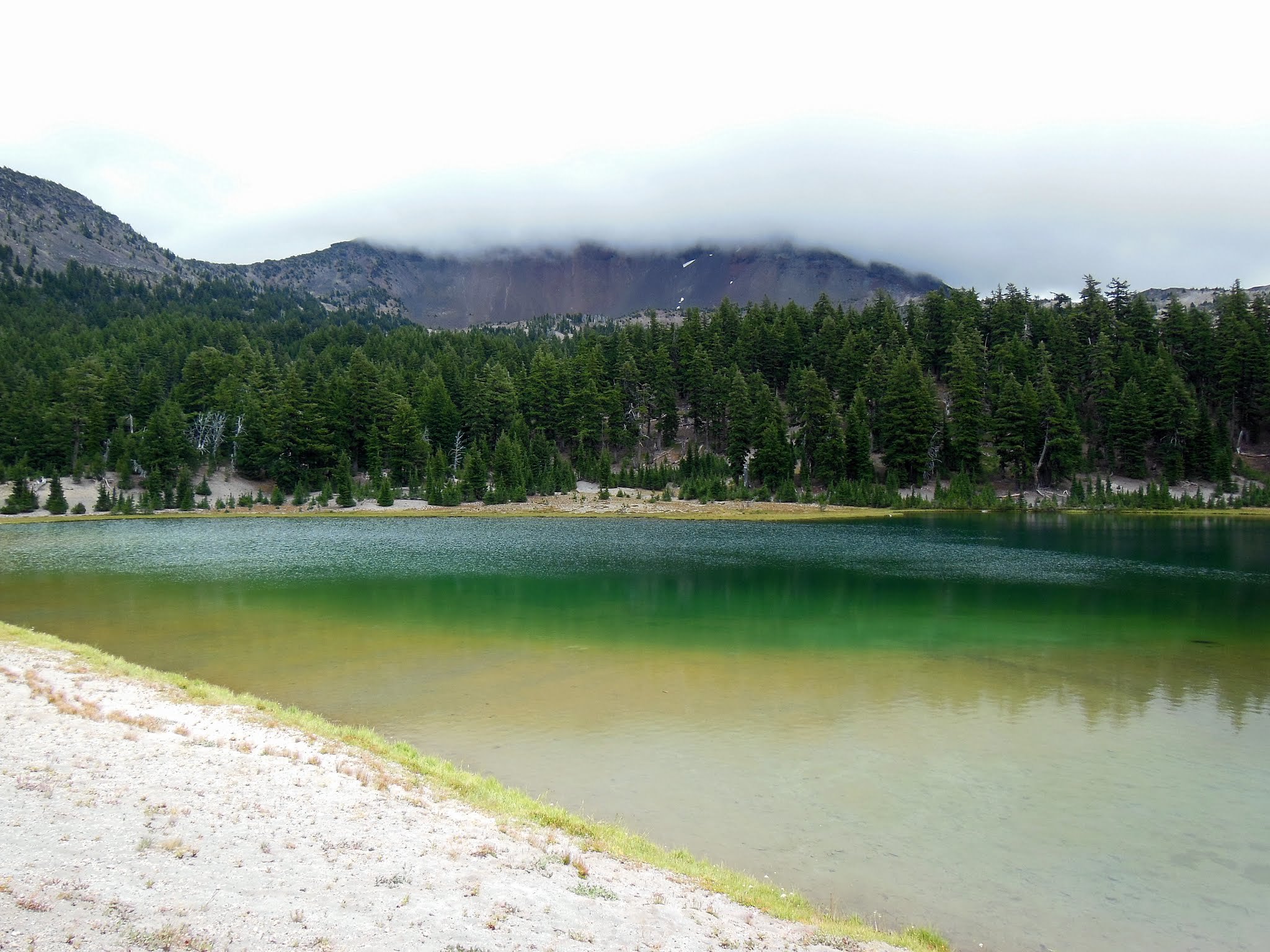 As we proceeded up toward the pass north of Green Lakes, we were surprised to meet a wilderness ranger. He was very friendly and asked whether we had a wilderness permit (we did) and made sure we knew about the campfire ban. In addition to his 60-pound pack (we asked), he was also carrying a Pulaski! I always thought that sounded like a cool job, but I felt no envy watching him set off down the trail under that burden.

The wind howled up on the pass and we quickly made our way down to the turnoff for Golden Lake, which was to be our camp for the night. The area was relatively busy (probably 5-6 other sites occupied), but we snagged a decent site above the northwestern shore. We ran into the same wilderness ranger we had seen at Green Lakes. He mentioned that some horse packers camped in the meadow at Golden Lake had started a campfire, which seemed absolutely ludicrous given the dry, windy conditions. He said they claimed not to have noticed the signs regarding the campfire ban (right...). Fortunately, he was there to make them put it out. Some people! With the wind growing stronger and the mountains hidden behind low clouds, we scrapped plans to explore the tarns above Golden Lake's inlet stream and turned in early.

DAY 4
During the night, the wind stopped and we awoke to a gorgeous sunrise and sublime views of Broken Top above Golden Lake. 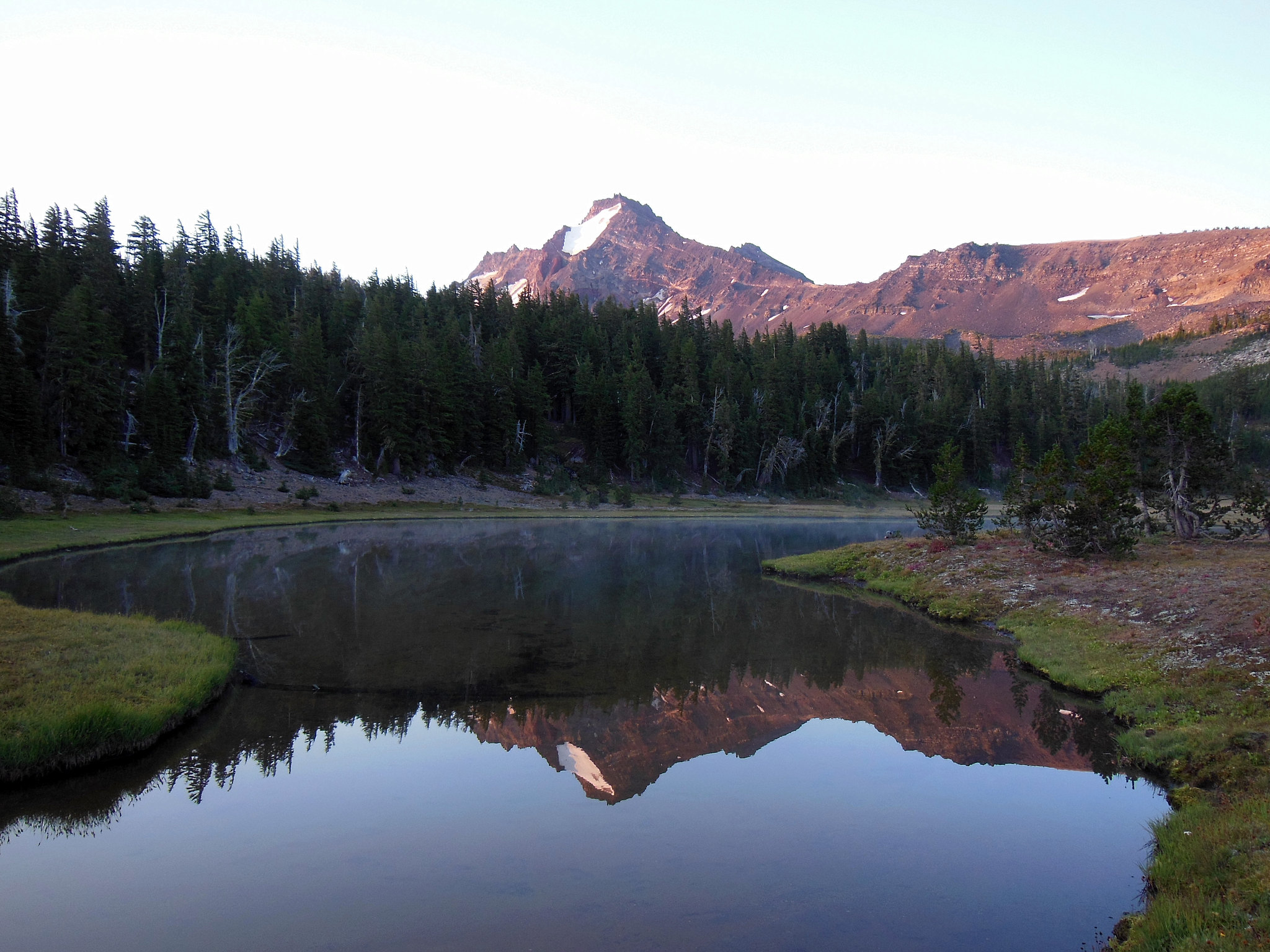 Disappointed to leave the lovely scenery behind but needing to get back to Portland, we packed up and headed toward Park Meadow, where we were treated to one last lovely view of Broken Top before returning to the Pole Creek Trailhead. 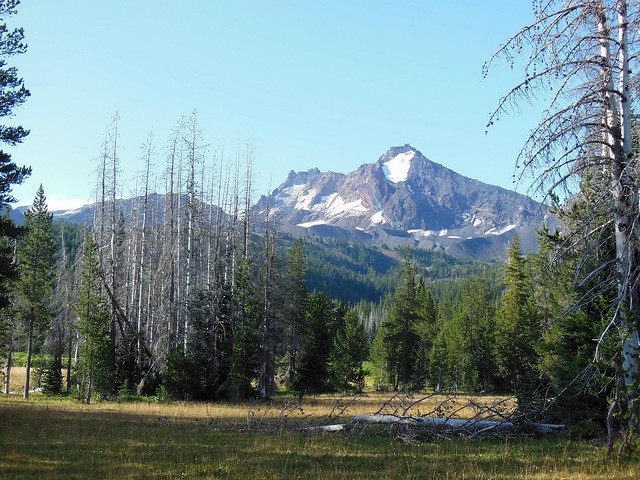 My best guesses for stats are 51 miles (including side trips/explorations) and 5,000 feet elevation gain, though my feet certainly felt like we did more climbing than that!
Last edited by trailmasterp on August 3rd, 2015, 8:25 am, edited 1 time in total.
Top

.
'We travel not to escape life but for life to not escape us.'
-Unknown
Top

Weird...I see all of them in my preview. I'll try to fix the problem and update the posting.
Top

I think I managed to fix the pics...fingers crossed!
Top

trailmasterp wrote:I think I managed to fix the pics...fingers crossed!

Looks good to me! Thanks for the excellent trip report and pictures. And great idea for a loop - I've been thinking about something very similar.
Robin