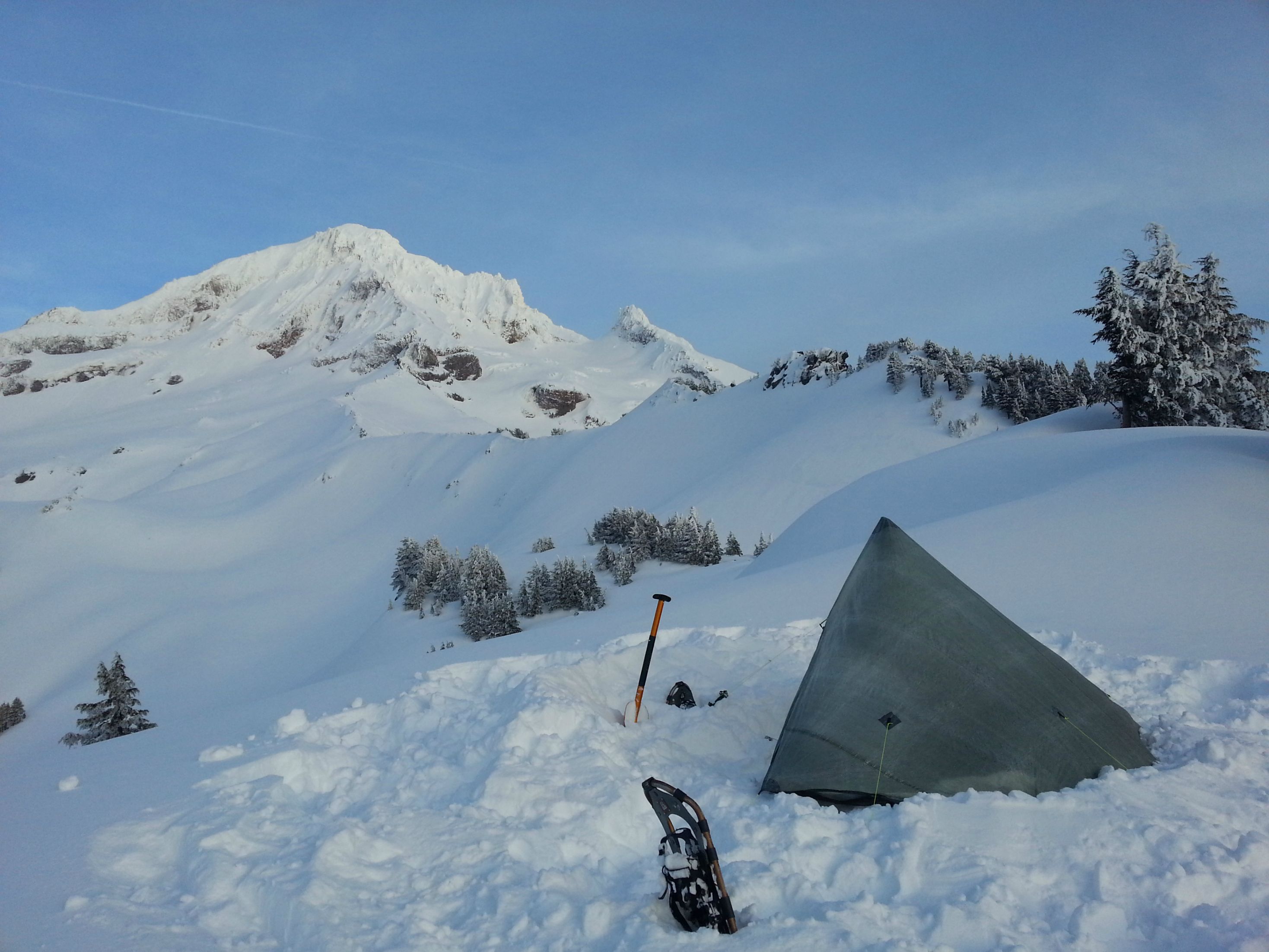 I parked my car by the sandy river bridge at 10:30am under cloudy skies with occasional snow/rain showers. Whenever I park here I always expect my car to be broken into and gutted. For whatever reason this place makes me feel more sketched out and unsafe than any other TH. Shoving those concerns aside I made my way up the ~2.2mi road walk to the Ramona Falls TH. Just ten minutes in the snow became soft and the snowshoes went on. 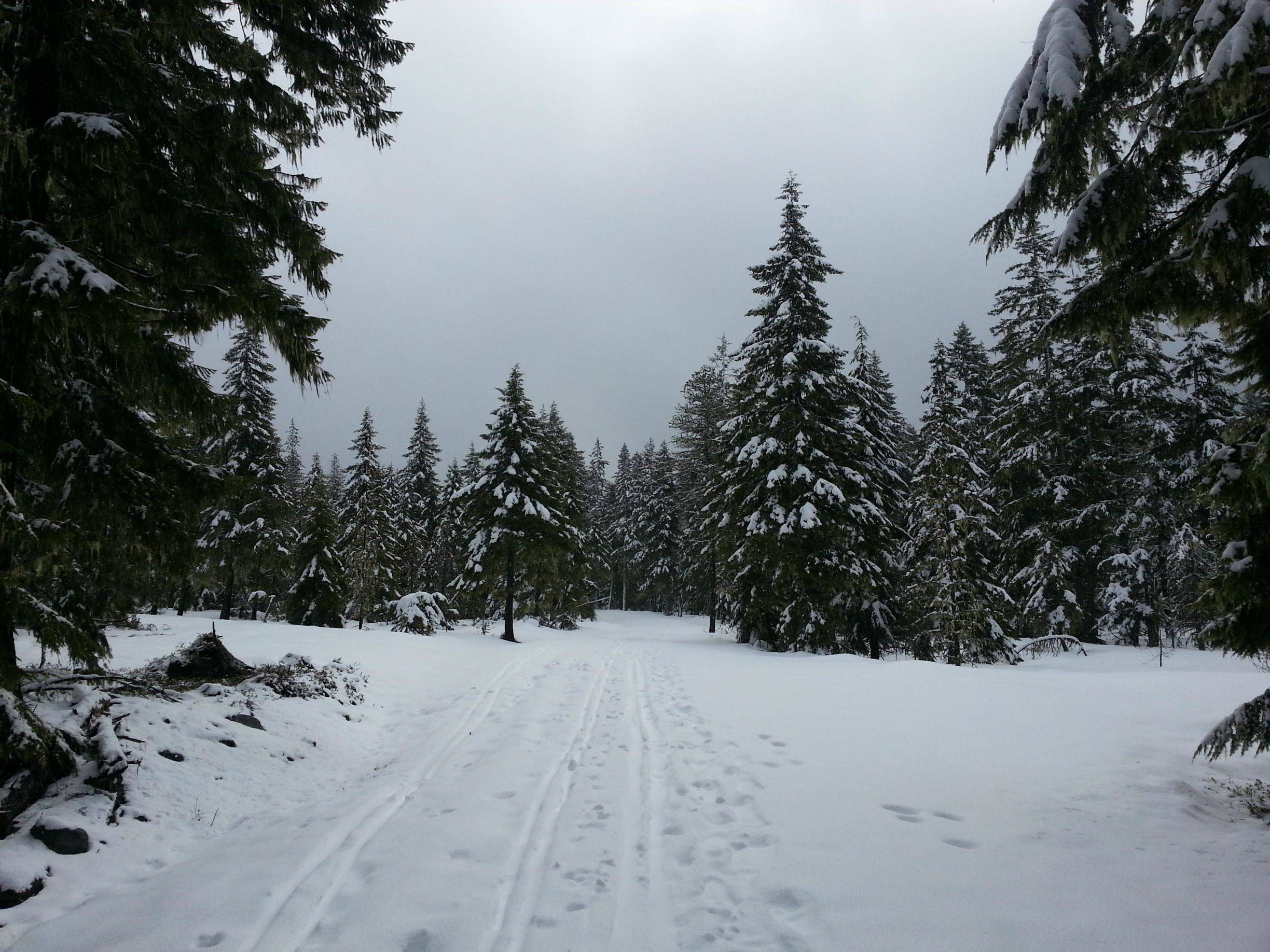 Shortly after passing through the Ramona falls TH parking lot all the ski/snowshoe tracks stopped, leaving me to stomp out my own path. Not particularly following the trail I had to consult my gps to make sure I was at the actual sandy crossing. If my gps was correct this section has dramatically changed since I was up here last December. From here on I navigated without maps or compass mostly because I didn't want to be reminded how much further I had to climb.

I wandered around for a while trying to find a decent crossing. After sizing up and trying out two different log crossings I backed off and started muttering to myself, "don't be an idiot this is not the place to injure yourself." I eventually found a nice big log with good access on both ends and started to shuffle across. While over the middle of the sandy feeling much better about my decision one of my steps knocked loose a chunk of bark and snow exposing a section of slimy frozen wood. My heart almost exploded through my chest as I barely regained my balance and that voice came back to say "You're an IDIOT!" I somehow managed to make a large step back onto more stable log and finished the crossing swearing to never do that again.

After my jolt of adrenaline I had an uneventful trek up to Ramona Falls as the sun began to punch through the clouds. 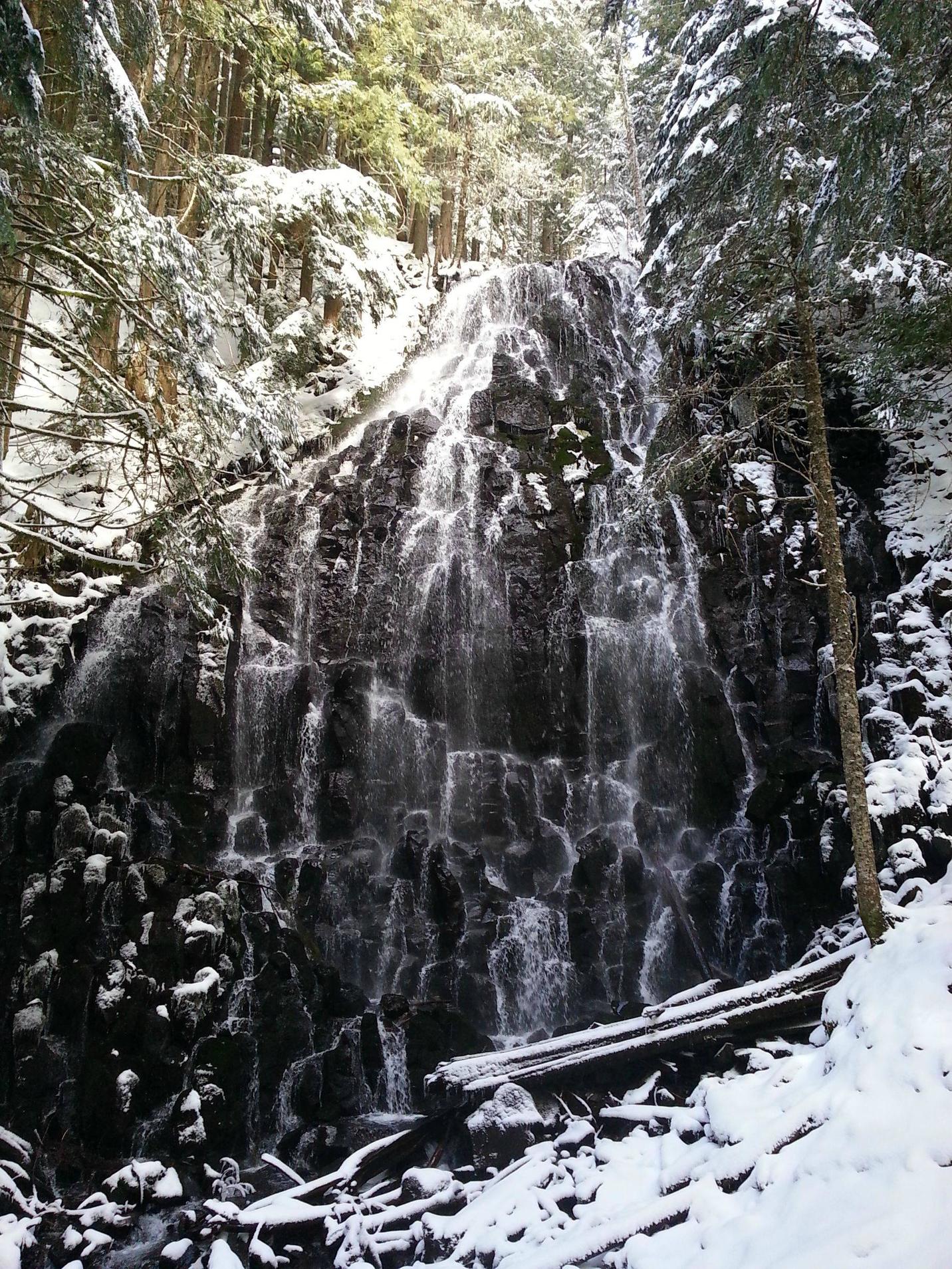 While at the falls I was already feeling pretty tired and was even making up alternate plans if i didn't make it to the top, but some instant coffee and the prospect of clear views gave me an extra boost for the climb. I filled up with 5 liters of water and began hiking up the TT towards the Yocum Ridge trail. Shortly after the trickling streams/seeps on the right the slope eased up a little and I headed directly uphill for the ridge ignoring the trail from here on out. This area has to be one of my favorite forests on hood full of rhododendrons and tall spacious trees. 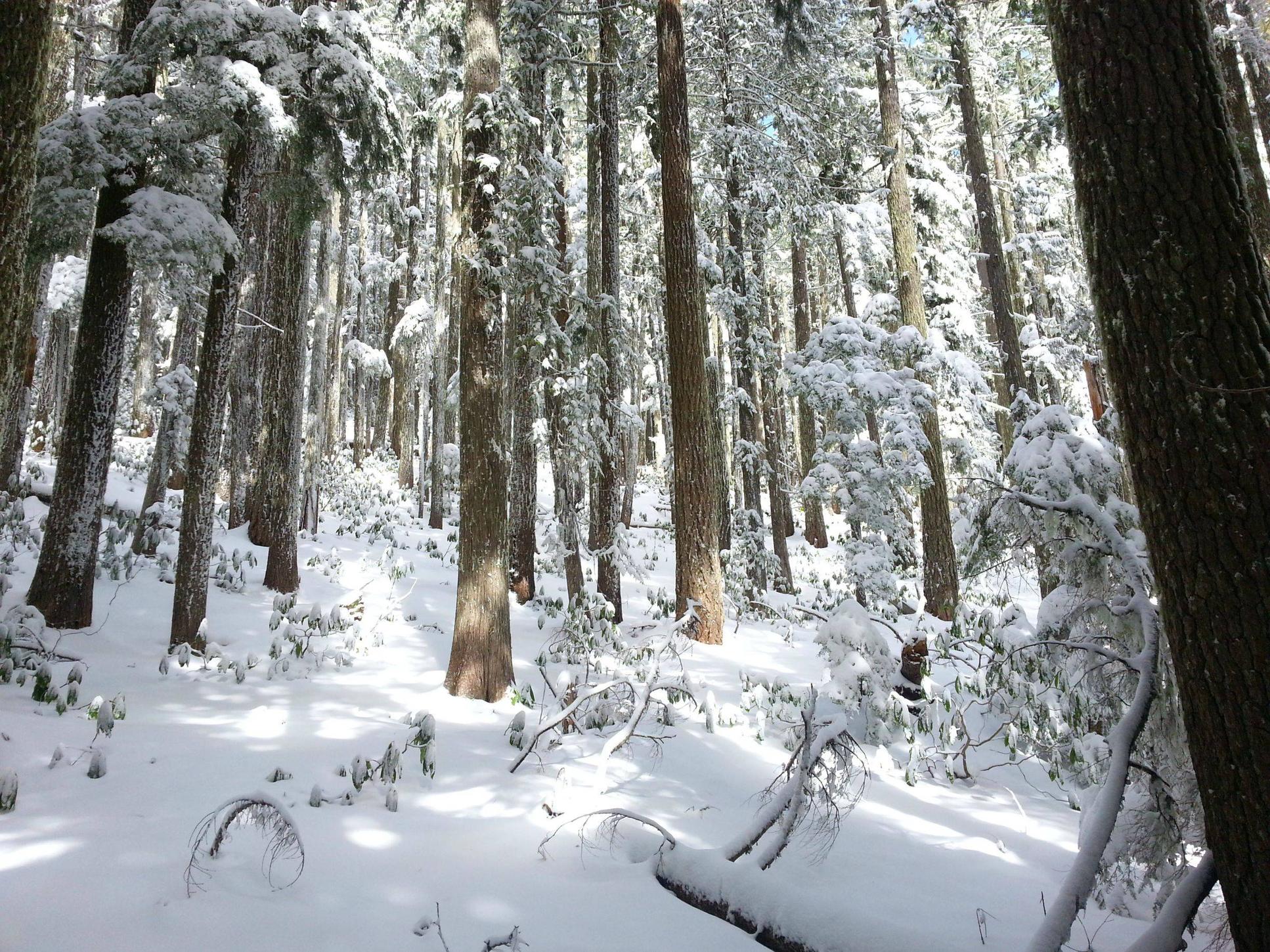 The long trudge up to the top with a full pack really kicked my butt. There were a bunch of snow drifts I had to climb over or weave around and I was sinking in the sugary snow even with my snowshoes. Part of the reason why I love this hike so much is that Mt. Hood is hidden from view for most of the climb saving the grand unveiling for the end.

It took a while to set up my shelter as I'm just getting into winter camping, but I managed to finish before sunset when the wind gusts picked up.

My campsite was great for views but left me exposed to some nasty wind at night. The forecast called for increasing winds and snow for Tuesday so I reluctantly got up at first light to break camp avoiding foul weather. 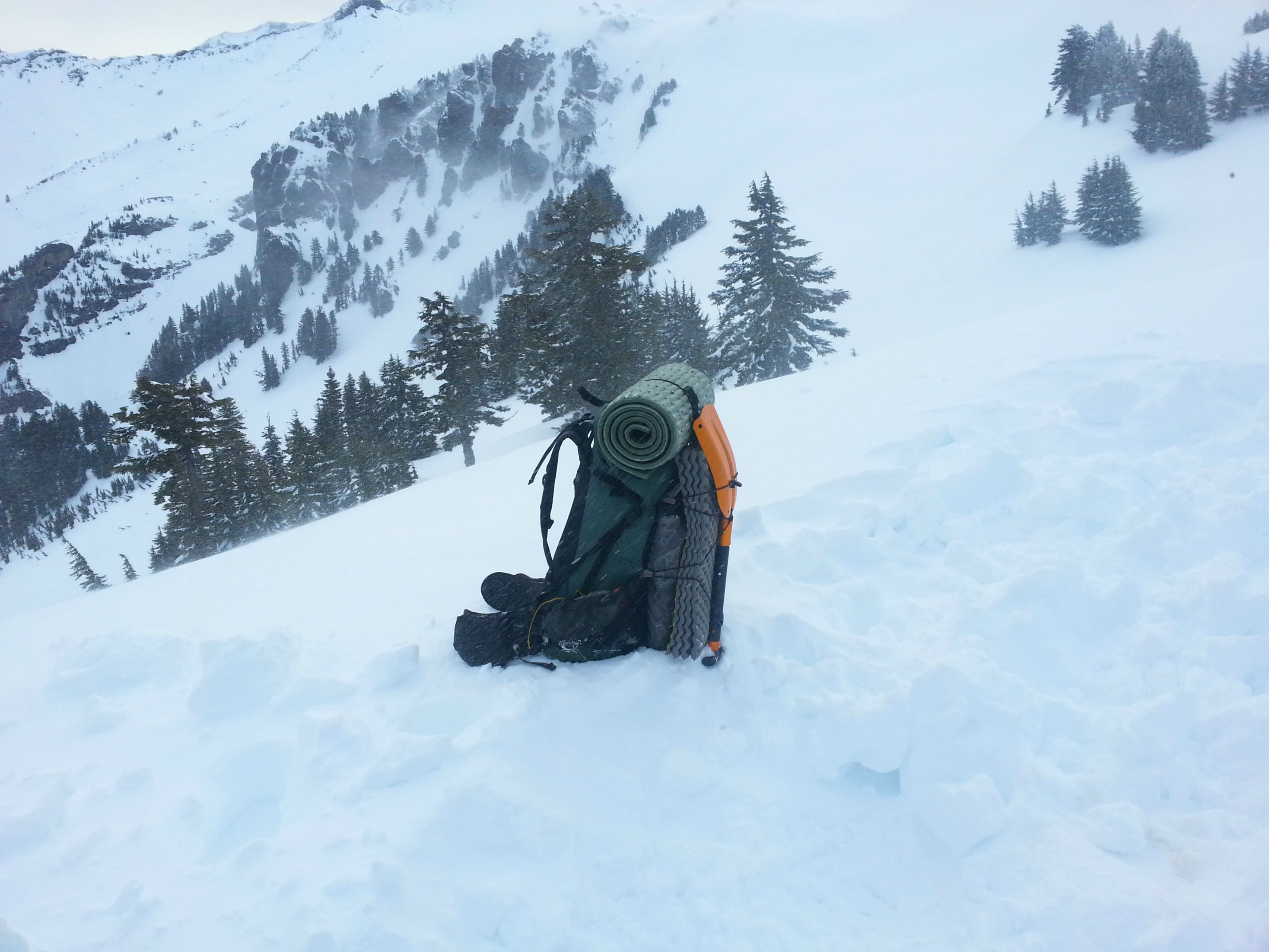 Offtrail above Ramona Falls i came across this random section of fence. Any idea what it's from? 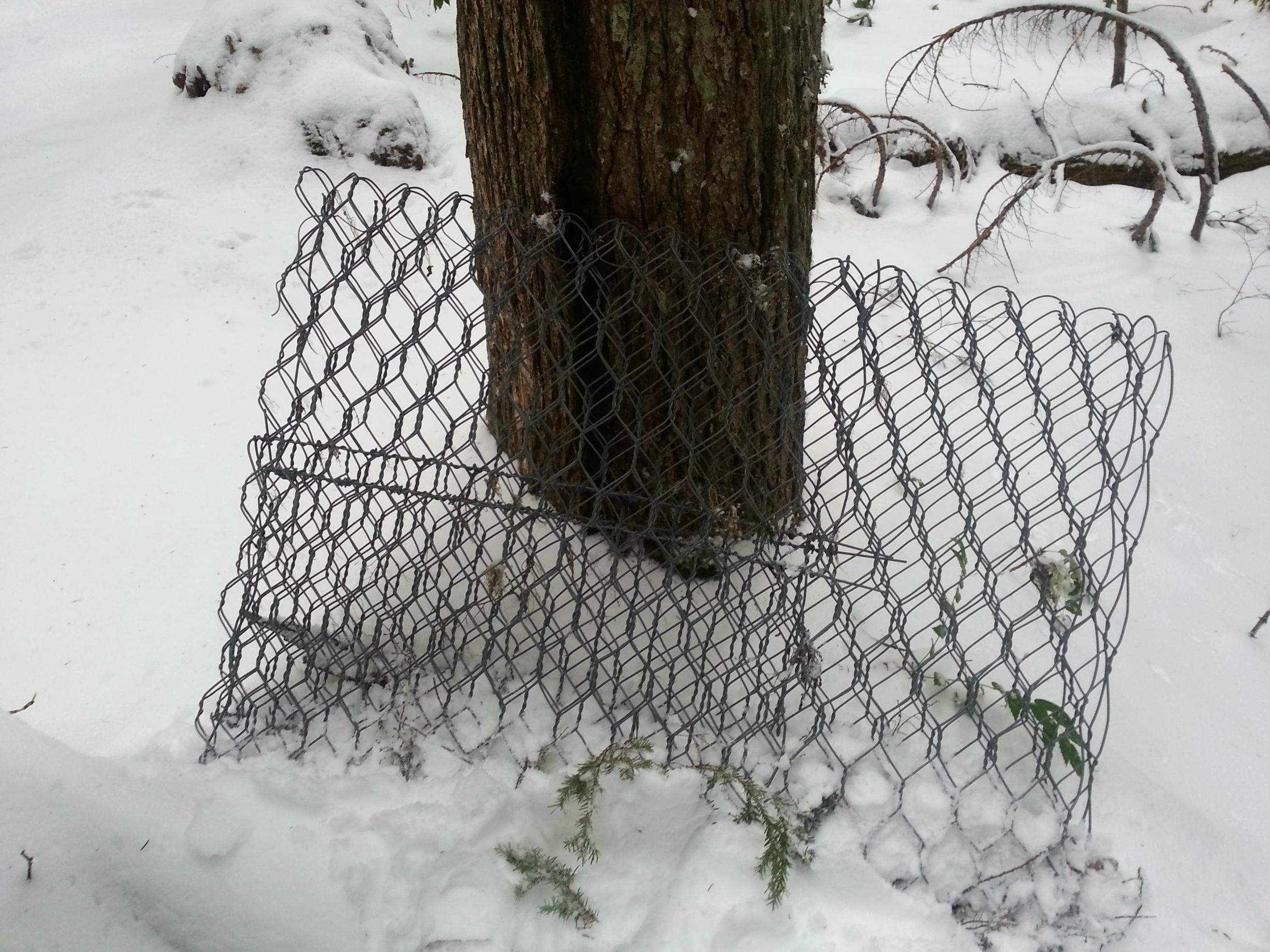 Fortunately I had a straightforward hike back to the car. I found a shallow spot to ford the sandy instead of log crossing and even found my car where I found it with windows intact! Next time i'll try making it up to McNeil pt. for an overnighter.

Wow! Amazing you did that with snowshoes the whole way!

Maybe the reason the TH gives you the creeps is all the broken glass in the gravel?

You carried 5 liters from Ramona Falls to Yocum??? That's 10+ pounds. I think I'de melt snow, but that's a pain too. And I think I'de carry maybe 3 liters for one night. My last trip I had to carry water which I didn't do very good so I'm trying to figure out a better system.

Looks beautiful up there with all the snow.

Good job. That's one of my favorite trips also.
Top

I'd start with 2 pints and a stove. Way lighter, more compact and the stove offers flexibility that is occasionally appreciated. A no-brainer I would think, unless the stove being brought is a low energy alcohol burner that takes too long to melt and heat water.

The problem too-often overlooked is that one cannot drink enough cold water to stay hydrated unless one is warm already and generating enough heat. Otherwise the stomach rebels. In spring, with flowing water, the cold water problem remains.
Top

That fencing looks like the same stuff that is filled with rocks and used to shore up trails.
Tyler Mode
http://www.naturespixpdx.com
Top

Bravo! Also, that's a nice looking tarp. Is it cuben fiber? It looks like you've pitched it very well.
Believe it or not, I barely ever ride a mountain bike.
Top

I'll defend your call on carrying water: you had plenty to drink (important in winter, too), didn't have to use precious fuel "making" it, and had the joy of a MUCH lighter pack on your return trip..!

I stand in awe for anybody that breaks trail in the winter and the all the way to Yocum Ridge. Thank you, for sharing your report.
"When we try to pick out anything by itself, we find it hitched to everything else in the Universe." - John Muir
Top

raven wrote: I'd start with 2 pints and a stove. Way lighter, more compact and the stove offers flexibility that is occasionally appreciated. A no-brainer I would think, unless the stove being brought is a low energy alcohol burner that takes too long to melt and heat water.

I would have loved to melt snow up there instead of carrying 11lbs of water, but as you guessed all I had was my little fancy feast alcohol stove. This being my first "official" snowy overnighter I tried a few stove set up variations, but ended up just setting my cat can on my shovel. I learned the hard way why you don't set your alcohol stove directly on the snow and only managed to melt about half a liter of water with 5oz of alcohol.

I'll have to get some kind of canister stove for next time as well as a proper winter sleeping pad. Two worn out foam pads DO NOT provide enough insulation.


Charley wrote:Bravo! Also, that's a nice looking tarp. Is it cuben fiber? It looks like you've pitched it very well.

Thanks. That's the Zpacks Hexamid Solo-Plus. It's cuben fiber with fully enclosed bug netting bug netting underneath and weighs only 12.3oz. I have nothing but good things to say about it.
Top

Read up on canister stoves before buying one with thoughts of cold weather camping. There's a role for naphtha or kerosene in a pack under cold conditions.

About your hexamid tent -- how readily did the netting separate from the snow when you packed up?
Top