Last month I hiked up Big Huckleberry from the W via the PCT from Panther Creek. Pablo mentioned that there might be a way up via the W ridge from one of the logging roads. After looking at the map, there seemed to be a loop - S via old logging roads, up the W ridge to the summit, and then back N via the PCT. So, after losing a weekend to food poisoning and foul weather, I just decided it was worth a day's pay to give this route a try. I parked at the Crest Horse Camp TH off FR 60, fought off swarms of mosquitoes while putting my boots on (if you're going to Indian Heaven, take LOTS of repellant), then headed back down FR 60 and turned S on FR 6801. Yes, it's a road, but I thought of it as just a nice, wide trail. 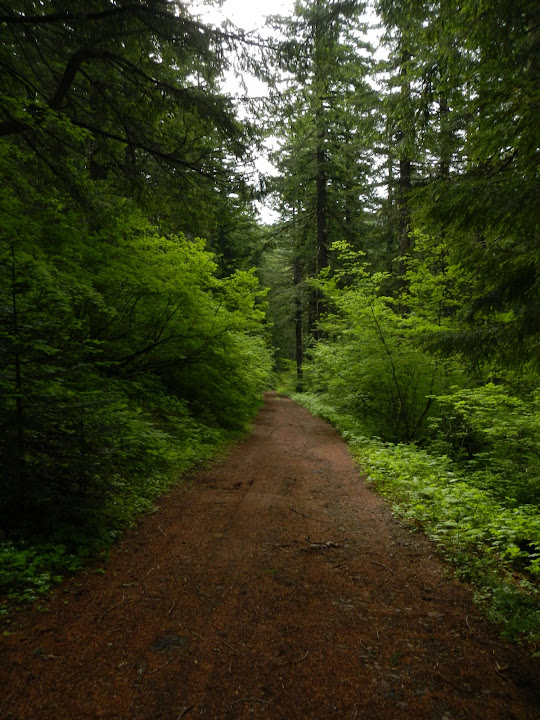 This mushroom had erupted along the side of the road - it was a full 6" across. 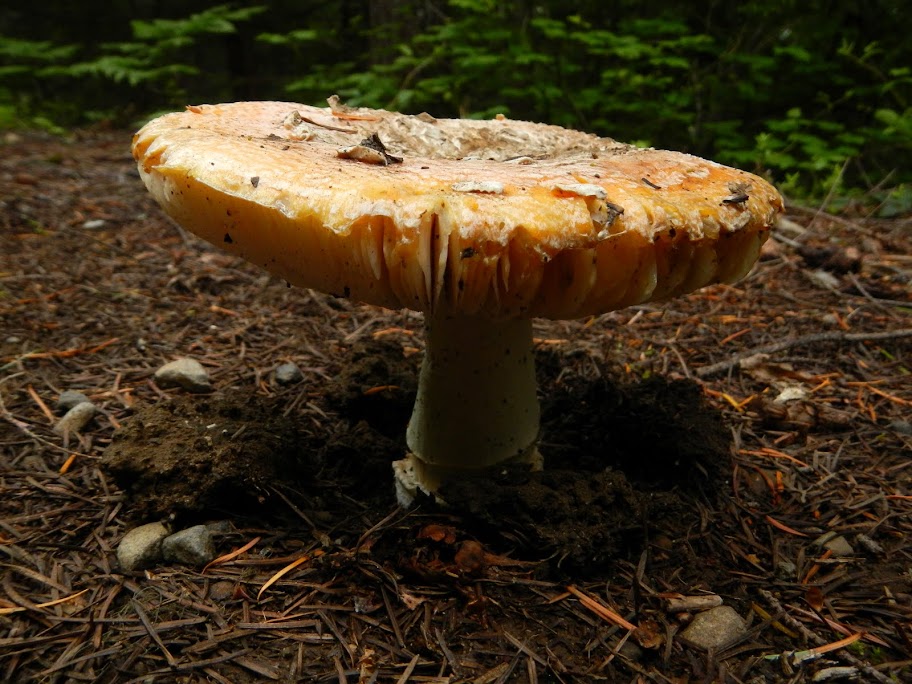 After about 2 mi, there's a major road junction and, about 50' up the road to the left and then on the right is a good trail that cuts over to the PCT. I used the PCT, which was its usually excellent self, to get to the top of the hill at 3600'. 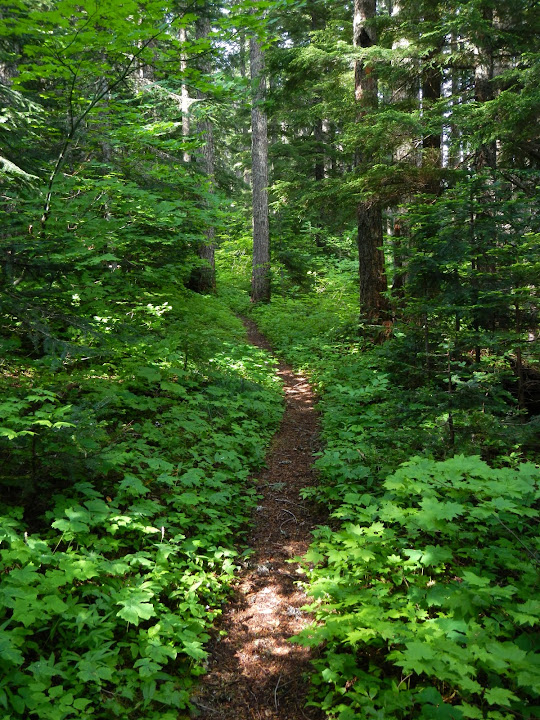 From there, I dropped down XC to intersect FR 069(?) and followed that S to where it crosses the W ridge of Big Huckleberry at 3400'. At that point, there's a side road (FR 071(?)) that cuts up and over the ridge. The old 100K maps show a trail coming down the ridge line and I was hoping it was still visible from the road. No joy. So I headed directly upslope and, after about 200', crossed a very faint, old trail that had obviously been worked on at some distant point in the past (unless Bambi can handle a chair saw 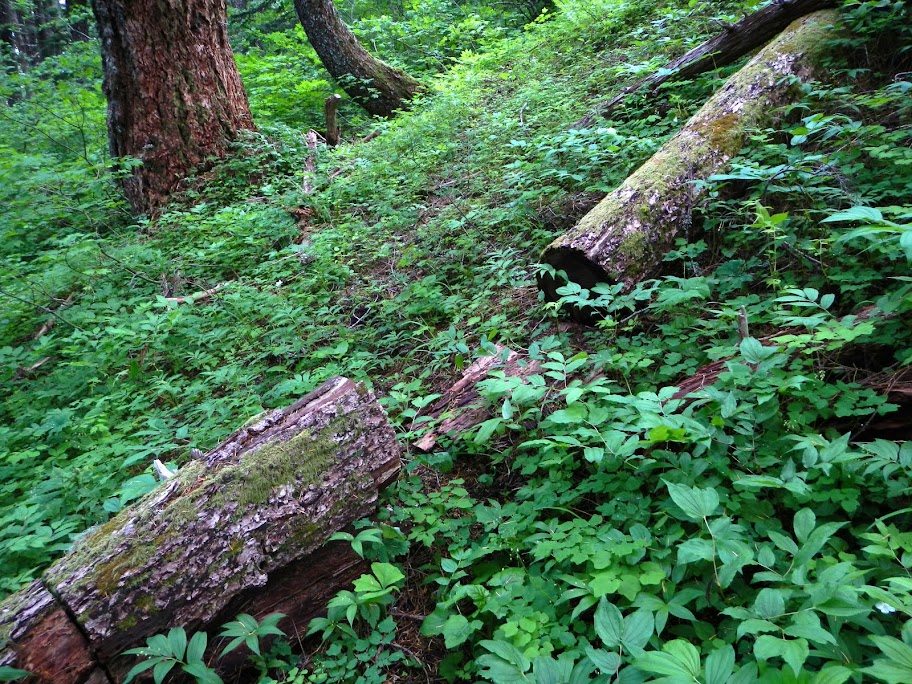 I tried following this "trail" up but it came and went so often that I finally just opted for the path of least brush resistance up the center of the ridge. At 4000', the ridge levels out and opens into meadows that were brimming with flowers - Big Huckleberry is the peak in the background. 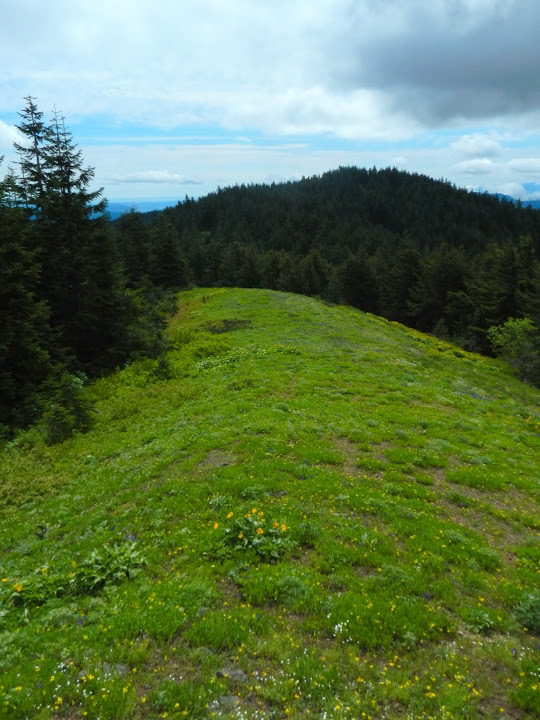 I followed the ridge top down to where it connected with the PCT at a saddle. The "trail" down the W ridge starts just right of the dead tree - not at all obvious. 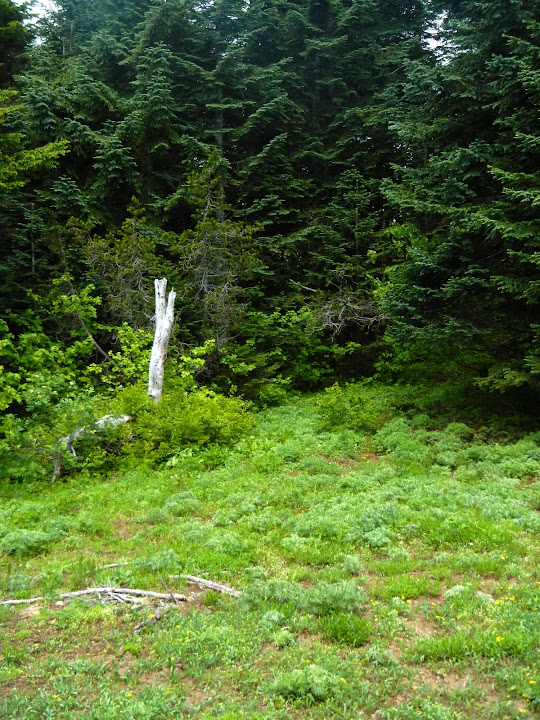 However, there's a great view of Mt. Adams from that saddle. 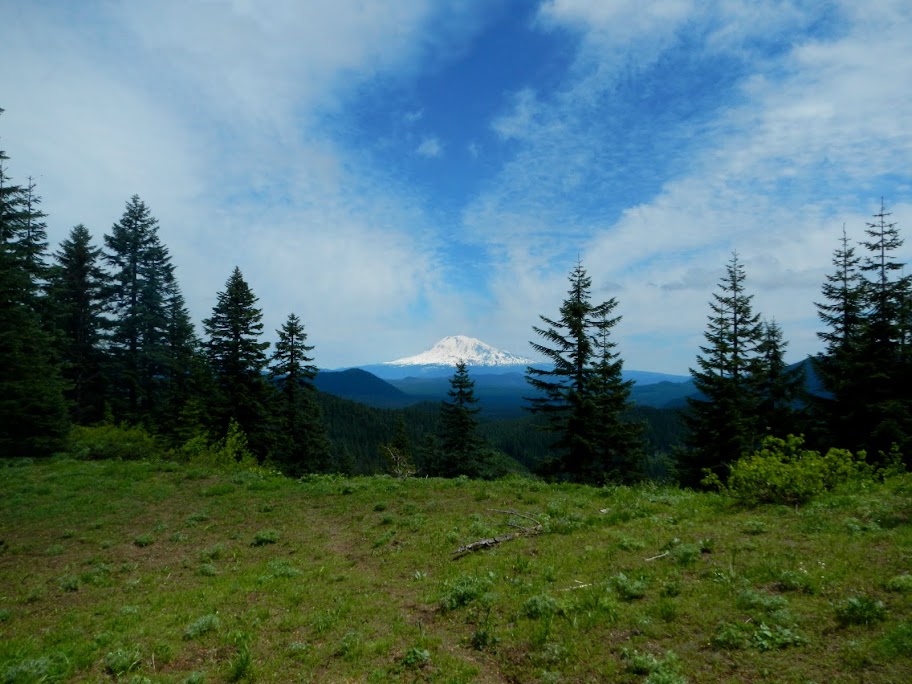 It was a day of mixed clouds and sun so, while Adams was clearly visible from the saddle, Hood was dodging in and out of the clouds as seen from the summit. Wind Mtn is visible directly below Hood and Dog Mtn is visible immediately to the left of Wind. 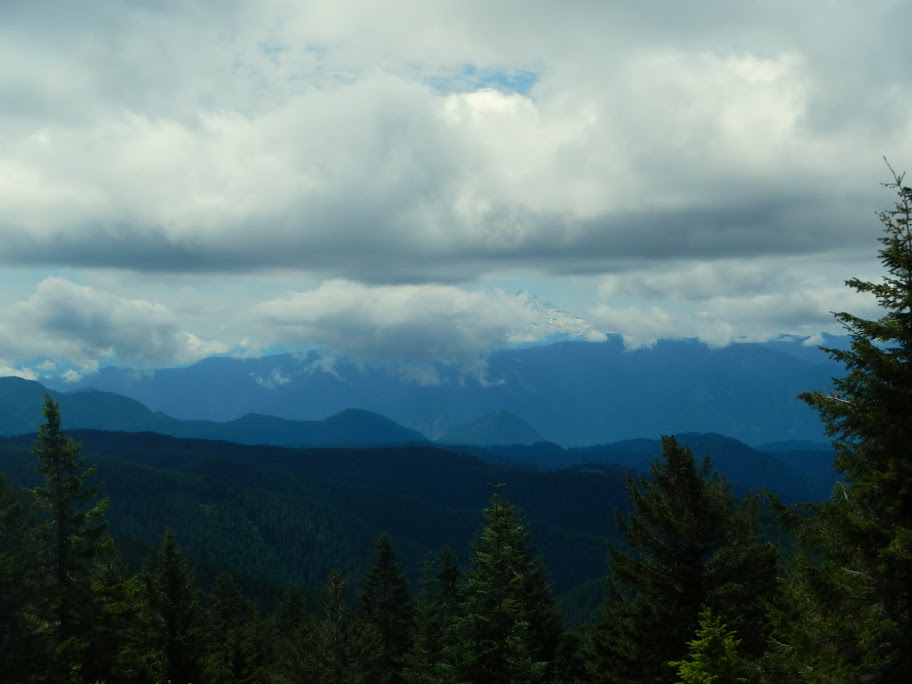 After a snack and some time enjoying the warm sunshine, I headed back N on the PCT. At one point (PCT Mile 2201.8 to be exact) there was this sign pointing toward a water source which probably isn't all that constant. 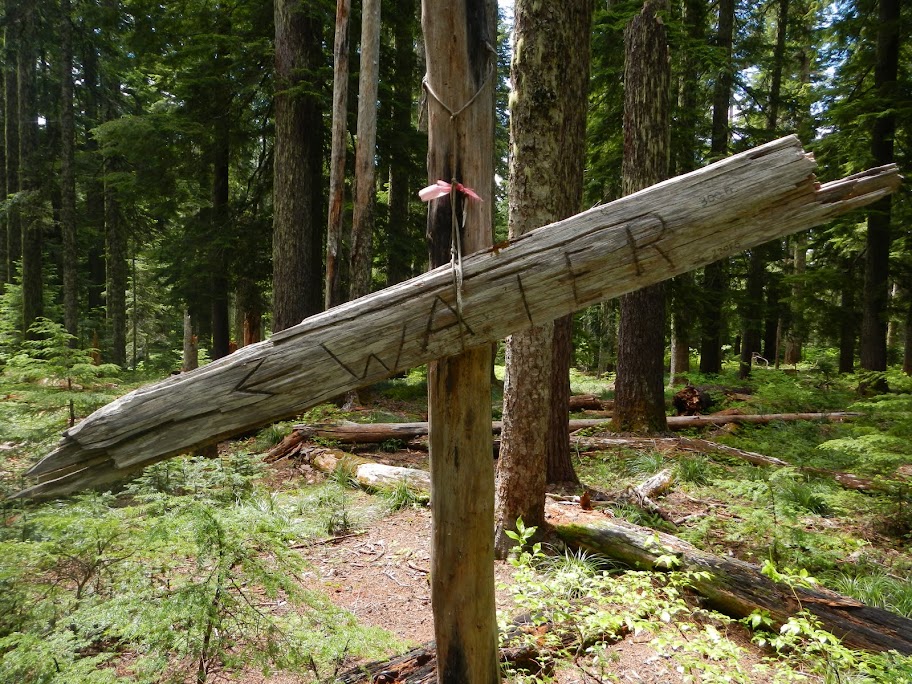 I also found and followed a short section of the old CCT on the way back. It went pretty much straight downhill - definitely not horse-friendly and not all that hiker-friendly either. For about 2 miles before reaching Crest Camp, the PCT skirts the edge (and crosses in two places) the Big Lava Bed (yes, that's what it is, but maybe it deserves a more interesting name?). 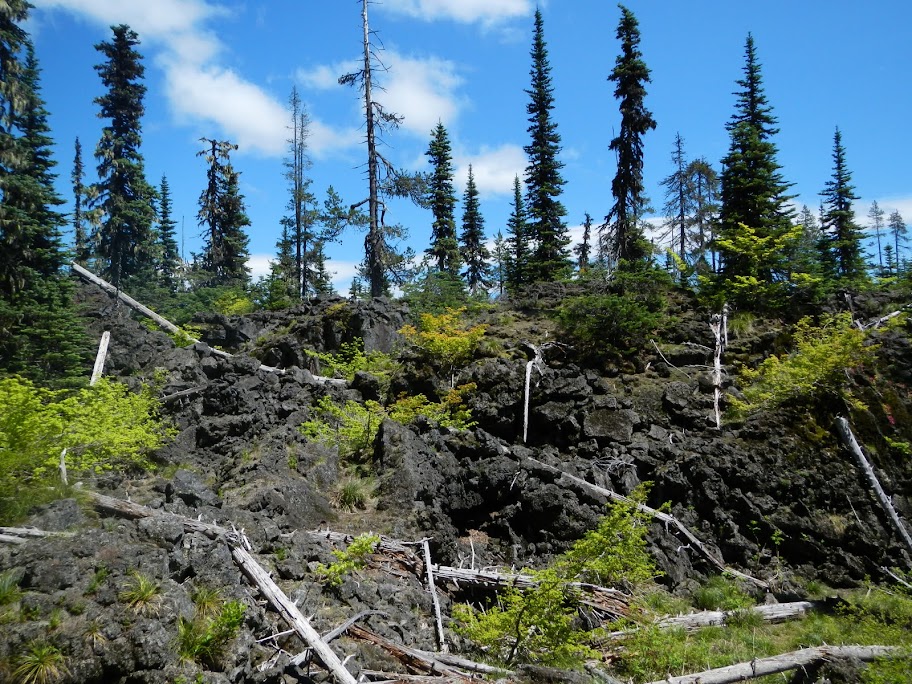 All told, 14 mi RT and only 2100' EG due to the start at Crest Camp. Probably not a loop trip for everyone - roads aren't trails and the W ridge is essentially XC travel - but the PCT out and back from Crest Camp to Big Huckleberry would be a really pleasant, varied, and scenic hike. 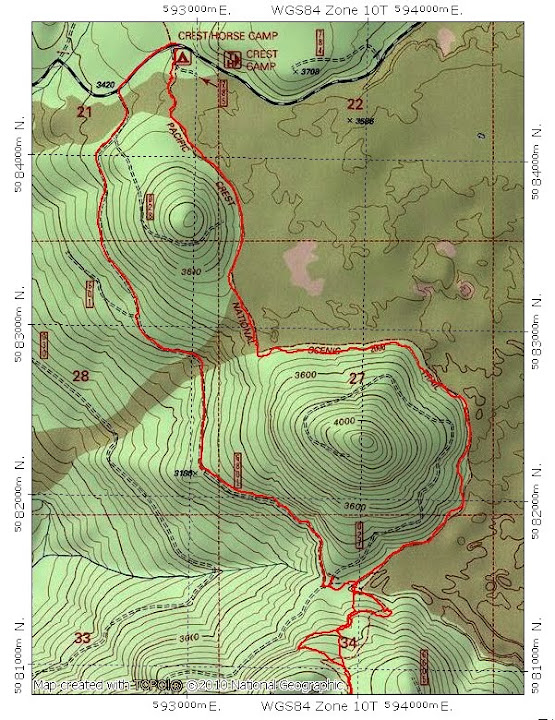 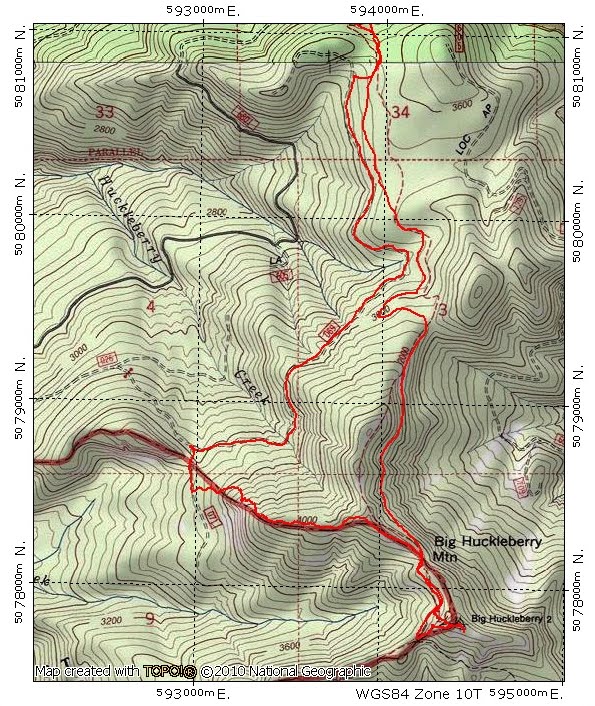 
I really look forward to that loop...
Some people are really fit at eighty; thankfully I still have many years to get into shape…
Top

Were there mosquitoes on the whole hike or just where you started? I spent too many years living in places where they were inescapable and now I avoid them.
http://spitnvinegar.blogspot.com/
Top

donaleen wrote:Were there mosquitoes on the whole hike or just where you started? I spent too many years living in places where they were inescapable and now I avoid them.

They were only irritating at the TH. They didn't bother me at all the rest of the way and the summit was entirely bug-free. However, had I gone N on the PCT from Crest Camp toward Indian Heaven, I'm sure - from previous experience - that the mosquitoes would have been really, really bad.

I love hiking in Indian Heaven but not until the Fall when the bugs are gone.
Top

I hiked from Crest Camp to Big Huckleberry on Saturday and the mosquitoes were horrendous until the trail starts climbing up the ridge. I kept myself pretty bundled up, but the few exposed parts are covered in bites.
Top

Indian Heaven in July. One brave man you are. I usually don't go into Mosquito Heaven until September.

Nice adventurous loop! You had some great views along the way. I like your PCT idea, too.
Jim's Hikes

Crusak wrote:Indian Heaven in July. One brave man you are. I usually don't go into Mosquito Heaven until September.

Nice adventurous loop! You had some great views along the way. I like your PCT idea, too.

Lots of DEET helps. Now that you've done Larch Mtn, you'd probably really enjoy Big Huckleberry via the PCT, either from Panther Ck or Crest Camp. Just go on a clear day as the views from the summit are part of your reward!
Top
Post Reply
7 posts • Page 1 of 1