Today we explored Labyrinth area starting from the trailhead at west end of Rowland Lake. The hike we did is similar to Labyrinth Loop hike described in the Field Guide, except that we started at other trailhead and didn't make a whole loop.

We started hiking west on abandoned road (former Hwy 8) which parallels Hwy 14. Not 10 minutes into the hike we passed a nice Lower Labyrinth Falls. 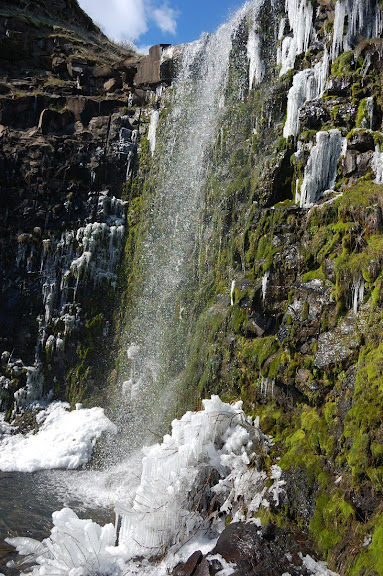 Soon we passed cliffs and took the first trail heading to the right. It does look like a bike trail, with pretty uneven grade and wide curves instead of switchbacks. We didn't meet any bikers or even hikers, which is surprising given this gorgeous weather. There was no snow to speak of until we got up to the higher hills. 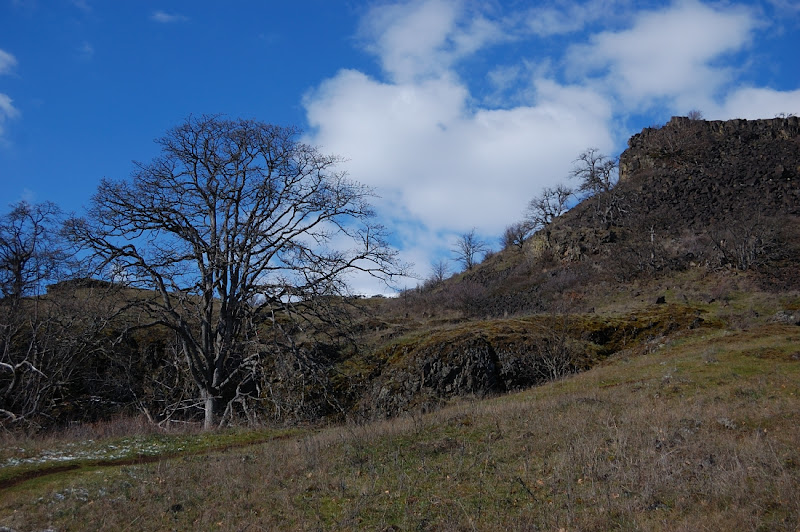 There were lots of early grass widows, which look good after yesterday's record cold night (well, today's night will be even colder, but I hope they survive it as well). Fair amount of those, and many more are still to come. 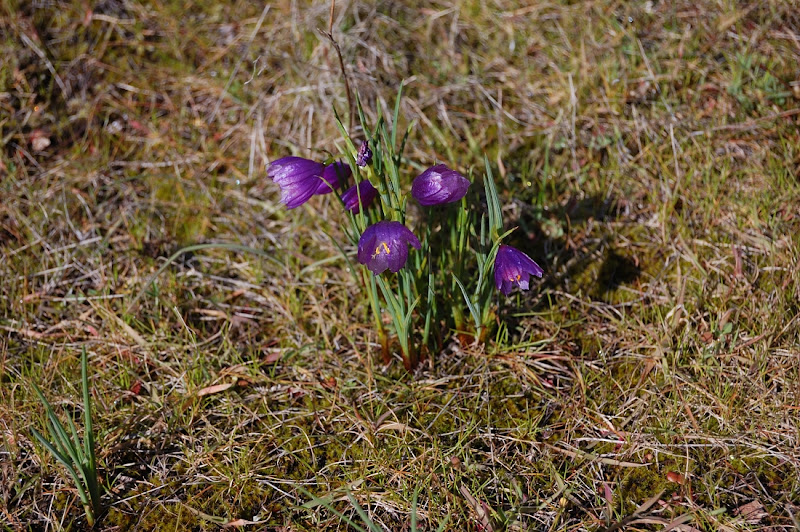 We followed Labyrinth Creek to the upper falls 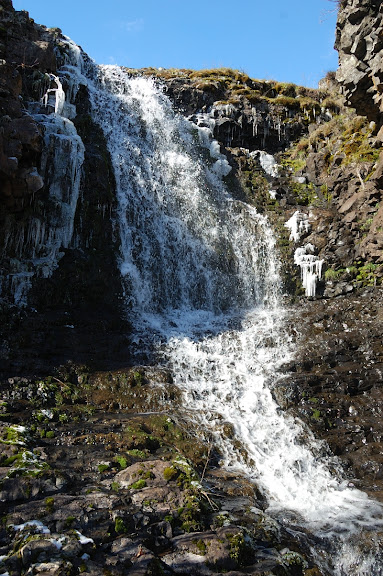 After a steep but brief climb we crossed the creek and followed the right side of creek's canyon. Though everything from now looked like winter, there was only a couple of inches of snow (5-6 inches higher up) so it won't last. The trail has completely melted out, which was helpful as neither of us hiked there before. 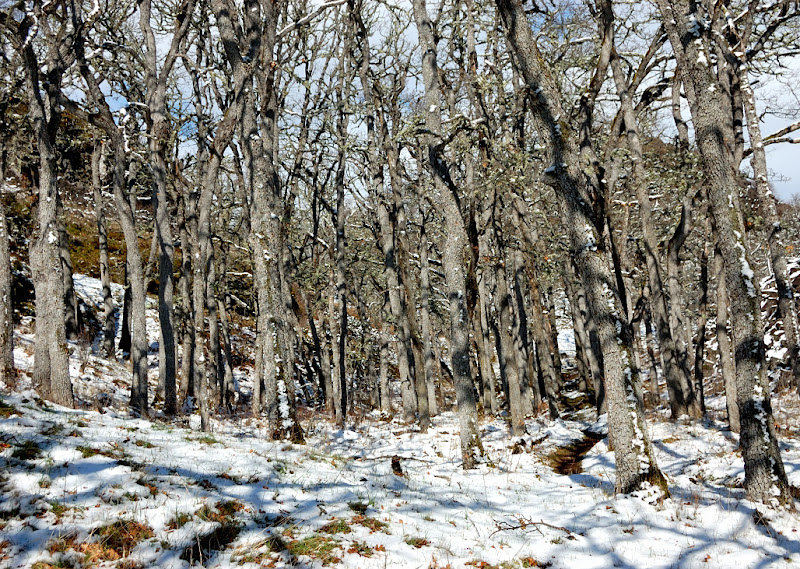 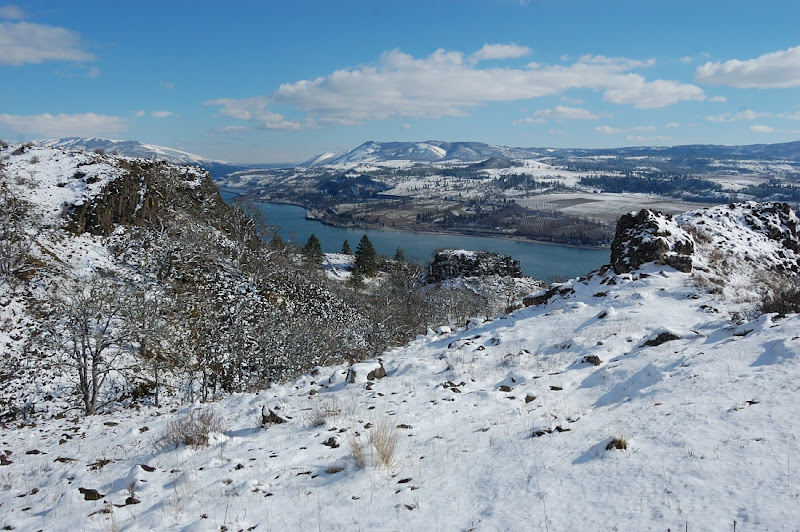 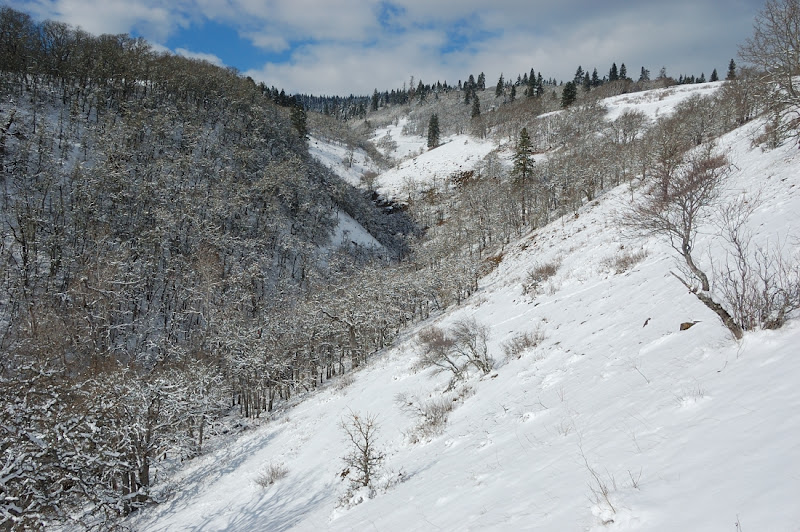 More flowers were showing up through snow. 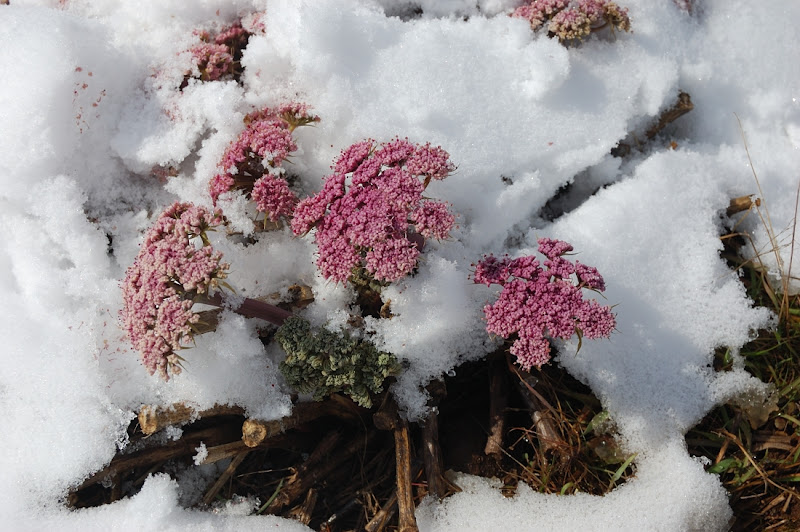 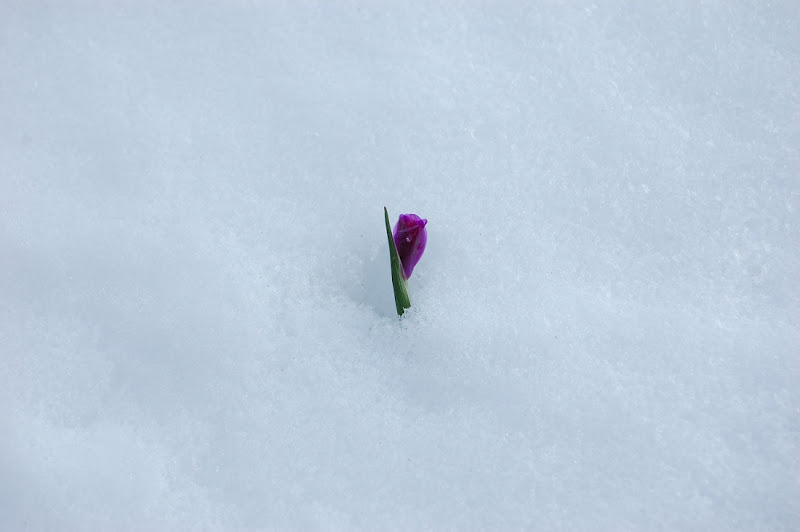 After a little more climb, we went to a road that parallels Columbia, and turned west. I really hoped to come to Coyote Wall and the map showed like it was a short hike from here.
We crossed the creek once again on a narrow bridge. 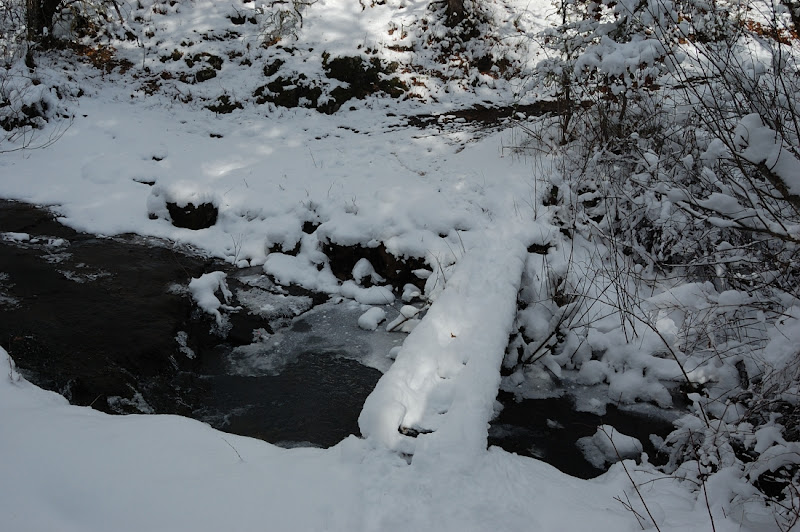 And followed an old road. 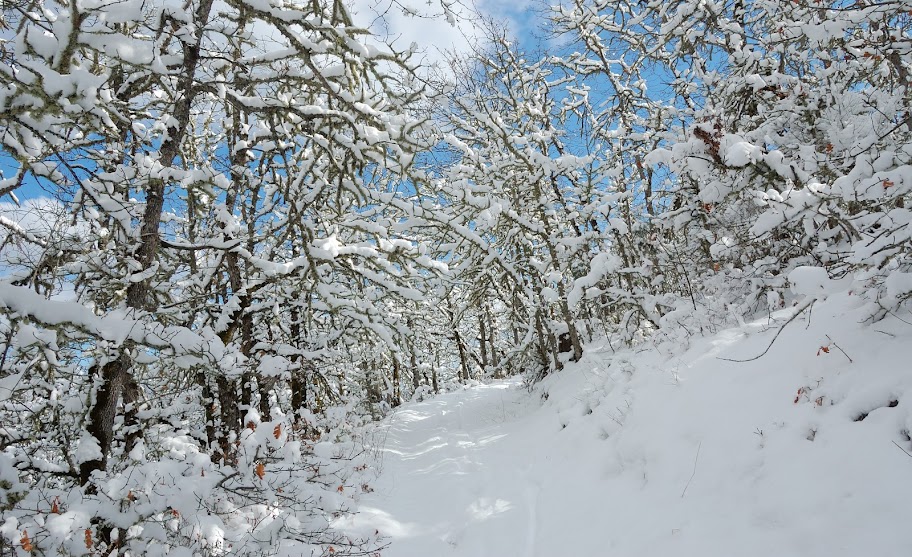 But too soon came to a property sign. A house was visible a couple of hundred yards from here, and the road run close by this house. Now reading the Field Guide it seems there is a way around this house, but with at least 3 roads there running in different directions it's still unclear which road we needed to take. The sign makes me believe we're not supposed to go straight on the main road, even though it's the most direct way to Coyote Wall. Can anyone clarify? 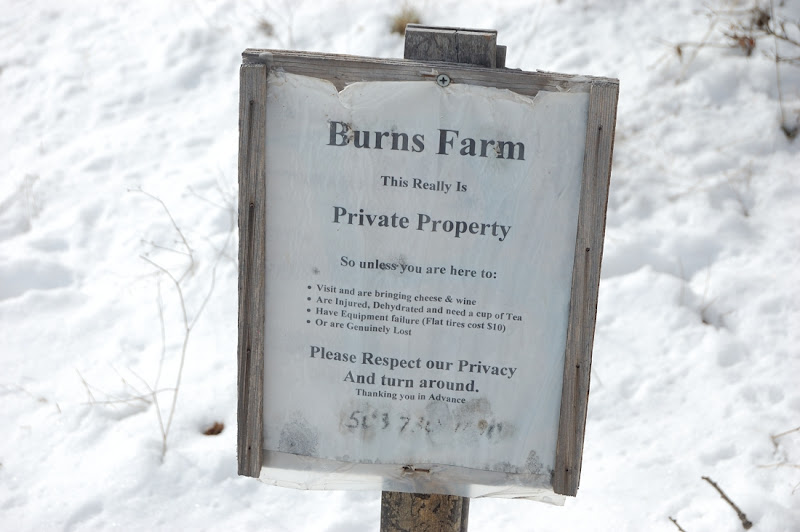 We decided to walk around the property and headed on another road downhill. Bike path we followed on the main road also turned downhill. 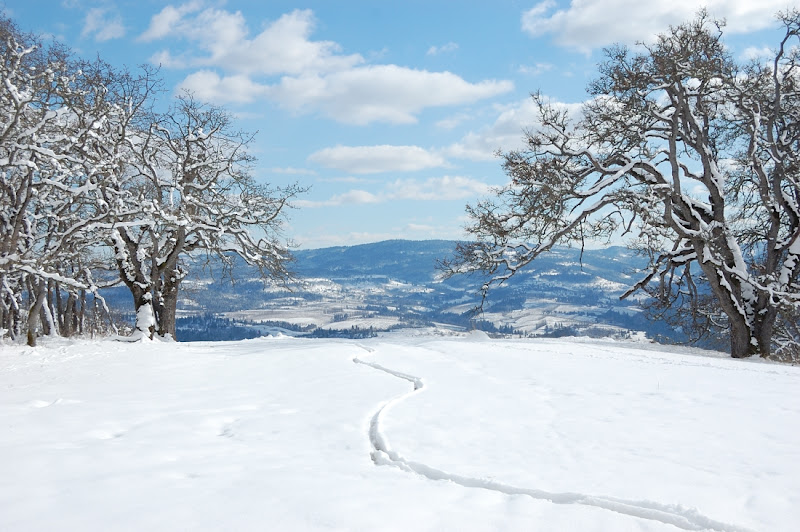 There was a good view to the river from the field below the house. 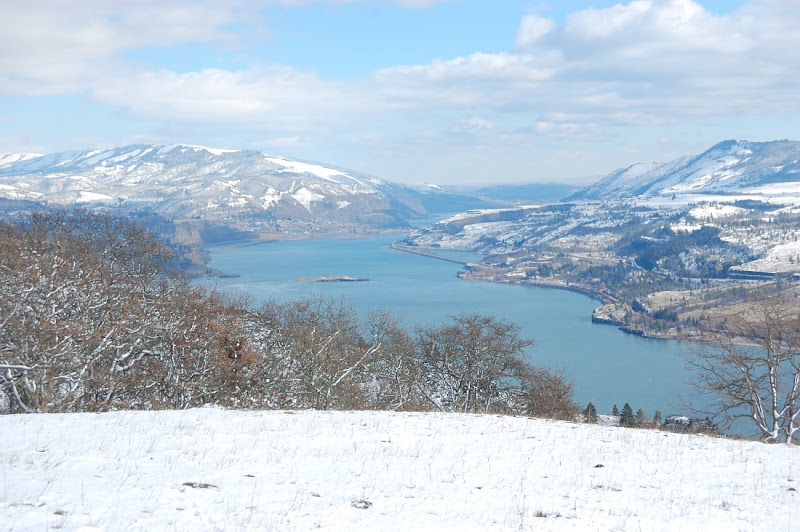 However, the road we took soon had another sign (this time from Forest Service). It went downhill to the south and at some point we headed off-road to the west to see Coyote Wall. However, my partner didn't want to do route-finding in deep snow so we soon turned back and took the way we came.
We had more of the views on the way back. 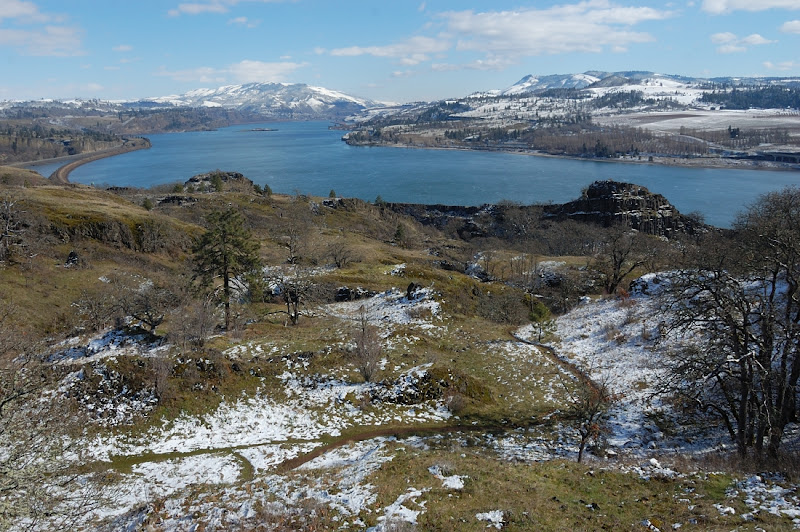 This adds to 3 kinds of flower we saw today. 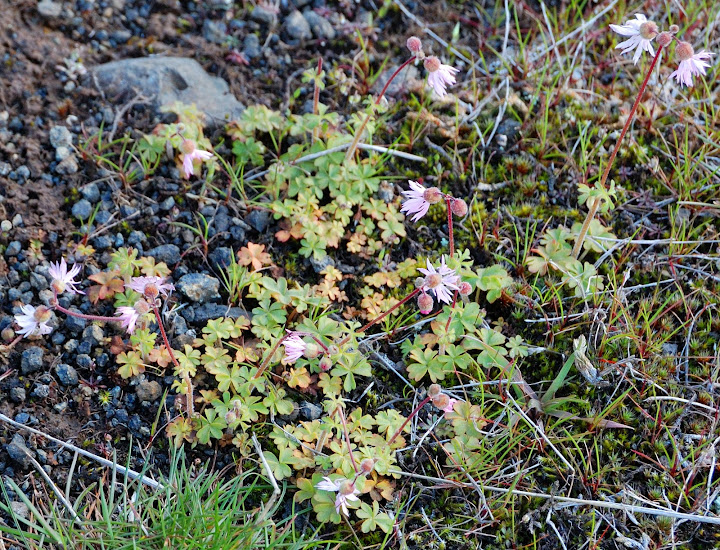 Near the lower falls we spotted several funny cairns that we overlooked on the way there. 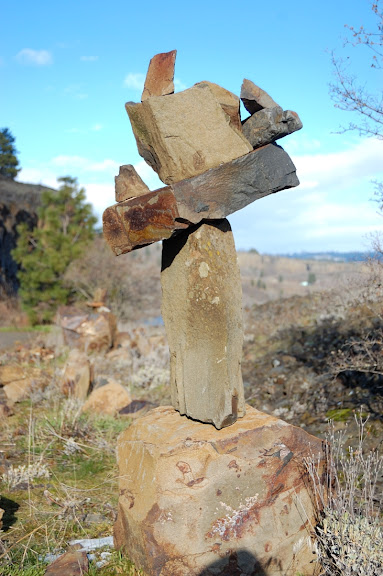 It was a nice hike despite some confusion with the roads (it's Labyrinth after all). Great views, great snow, sunshine, and no ticks!
Top

Very nice - your 9th picture (flower peaking through the snow) is a classic. Only time I hiked in the Catherine Creek area was in the summer - few flowers and lots of poison oak. Your photos have inspired me to move it up on my list of hikes for this Spring.
Top

Love the No Trespassing sign! Might be worth hauling the wine and cheese!
May your trails be crooked, winding, lonesome, dangerous, leading to the most amazing view.--E.Abbey
Top

Beautiful ~ I love the open hillside covered in snow and the ice waterfall. Been here a couple times for both biking and hiking, and once got "lost" up in that private property area once and got a (deserved) telling off from the business end of a pit bull!

The wine is for the owners and the cheese for the dog? Or the other way around?

May your trails be crooked, winding, lonesome, dangerous, leading to the most amazing view.--E.Abbey
Top

Basically, after your picture with the snowy footbridge and your "old road", you needed to stay lower. There was a junction soon after that and you went right when you needed to go left/straight (which at that moment was going south towards the Columbia). That route would have soon curved right/west and taken you to Coyote Wall in about 20 minutes from the bridge - it goes below all those houses.

The wrong turn you took is more worn because it leads to homes and public roads - Atwood Road is the main one up there. Since the correct direction that you missed is the more faint route, with the snow added in it may not have been obvious as a route at all. Snowy conditions are not ideal for finding your way in a new area with no trails signs! But you had a great day anyway. It took me many visits of exploration before I had all those routes memorized.
Top

Holy smokes, that's beautiful! Catherine Creek is one of my favorite places to hike, but I've never been there in the snow - great photos, Romann!


drm wrote:It took me many visits of exploration before I had all those routes memorized.

I still get "lost" all the time between Coyote Wall and the area just east and above the Catherine Creek arch. It's a really great place to get lost in, though! Several times I've intentionally watched the sunset and hiked out after dark... Just watch the time and daylight and come back a few times to learn the major routes when there are more wildflowers than snow.
Jason
http://www.borrowedtimes.blogspot.com
Top

Yep, a very confusing area (I've only hiked it once) - Is there a good map yet of the Catherine Ck/Coyote Wall area?
Top

Very cool pictures Roman - except every time you go out, you further your lead on wenthiking - not that it's competitive, but still... Looks like I'm going to stop snowshoeing and get some more miles in to catch up.

Is there a good map yet of the Catherine Ck/Coyote Wall area?

Topo map shows most of the local roads in that area, but doesn't show trails since they all "unofficial". Field Guide has a good map for Coyote Wall: http://www.portlandhikersfieldguide.org ... _wall3.JPG
Our hike approximately went like this:

The terrain there is not so steep as in other places of the Gorge. You just pick a direction and most likely some trail will head there.


arundodonax wrote:Very cool pictures Roman - except every time you go out, you further your lead on wenthiking

Thanks!
But you're still ahead of me in uphill per mile gained. And looking on Hiking Summaries for last year some people had really crazy miles. I think joerunner may be well somewhere at 250-300 miles already since the start of this year, if he didn't set a goal to double his miles