With rain not forecast until Friday afternoon, I thought there might be time to get in a dry hike to North Lake to take advantage of the current low-snow conditions in the Gorge. But when the early morning forecast changed arrival of the rain to around 10am, I opted for an early and quick hike to Devil’s Rest via Wahkeena Falls. “Early” meant pre-dawn, where the darkness gave the lower paved portion of the Wahkeena trail a “long, lonesome highway” quality. 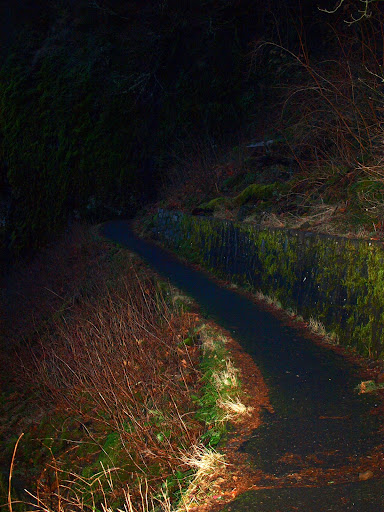 Early on it was cloudy but not raining and, after the sun rose, there was a pretty decent view down the Gorge to the East. 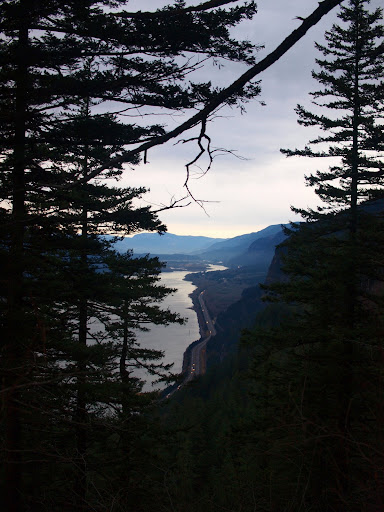 From the good view point off the Devil’s Rest trail near the survey stakes and marker, I got an OK view across to Silver Star – which was now even more bereft of snow than just a week ago. I also noticed that rain had begun to obscure the peaks to the east of Silver Star and knew that dryness was about to depart my hike. 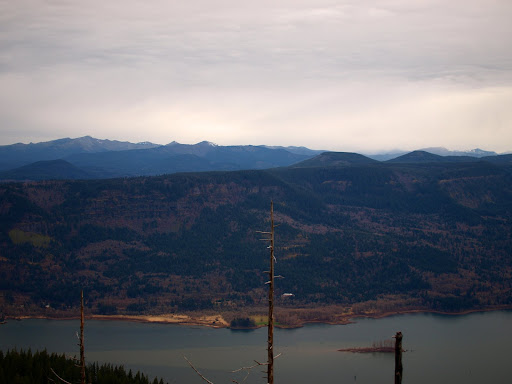 From Devil’s Rest, I returned to the trailhead via the “Primrose Trail,” which I first came across in the 1988 (2nd) edition of the Lowe’s “35 Hiking Trails – Columbia River Gorge.” I had posted a question about the current condition of this legacy trail and Don Nelsen responded with a great GPS track of his many travels in and around Devil’s Rest http://www.portlandhikers.org/forum/vie ... =10&t=3804, including this trail. Basically, you go around the right side of the top of Devil’s Rest (faint trail) and then head due north down the ridge (fainter to no trail). Near the top I found an old trail marker, but no others later on. 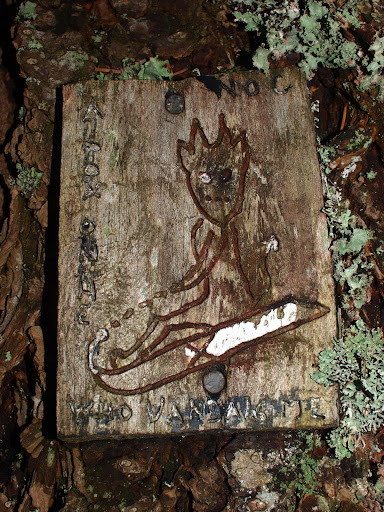 After the old trail marker, it was generally a bushwhack (although it was me and not the bushes who was getting whacked), with two short traverses to the west, a bit of very old logging road, and a stone cairn, until finally an intersection with the 415/400 trail right where it traverses an open boulder field at 1600’. It had been spitting rain as I thrashed down the Primrose, got a little more serious as I headed down past Wahkeena Falls, but didn’t really start pouring until after I was snug in my car. The Primrose Trail leaves something to be desired as a “trail” but following it was a fun alternative to the usual ways off Devil’s Rest.
Last edited by VanMarmot on January 19th, 2010, 7:51 am, edited 1 time in total.
Top

That's a neat idea -- starting a hike pre-dawn and watching the day begin on the trail! I'll have to do that sometime (if I can drag myself out of bed, that is...). Lovely, soft light in that second shot.

I don't know for sure, but that hand-made sign looks like one of the Basil Clark signs created in the 1970s and early 80s. I posted an old article that his son sent to me when I was working on the Field Guide descriptions for a couple of trails that Basil helped open: click here. For now, it's on my domain, but I'll eventually find a home for this on the PH.org site (and tributes to other hiking pioneers).

Splintercat wrote:I don't know for sure, but that hand-made sign looks like one of the Basil Clark signs created in the 1970s and early 80s.

Close-up the little sign with a devil riding a toboggan looks like it was done with a wood burning tool. It certainly qualifies as fanciful. The letters in the upper right corner read "NOC", those on the left side "A pox on he", and those at the bottom "Who vanda(?) is me." Fanciful & cryptic. Dan Brown could probably get a 400-page best seller out of these signs & symbols.
Top

Hmm... well, the Dan Brown code aside, the sign looks like Basil Clark's work -- here's a comparable from the Chetwoot Loop:

The whimsical mascots seem to be the defining feature of his signs - wonderful!

VanMarmot wrote: The letters in the upper right corner read "NOC", those on the left side "A pox on he", and those at the bottom "Who vanda(?) is me." Fanciful & cryptic. Dan Brown could probably get a 400-page best seller out of these signs & symbols.

"A pox on he who vandalizes me" perhaps?

What a cool trip report. A "lost" trail and some hiking history all in one hike. That's some good work to do before clocking in for the day!
Top

I remember those signs! "Chetwoot" means bear, which explains the critter on that sign.

I'll have to try looking for the Primrose Path again before the leaves come out. I tried a couple of years ago but that was in early July, with head-high brush everywhere! I hiked it several times shortly after I first moved here in 1989, before the fire. It made a good shorter loop from either Angel's Rest or Wahkeena Falls. Back then, someone planted primroses at the junction with the main Wahkeena-Angel's Rest trail.

The Primrose Path was traditionally the path that leads to perdition/hell, so is an appropriate name for a path leading to Devil's Rest! (I say was because the term has long ago fallen out of common usage.)
Top
Post Reply
6 posts • Page 1 of 1