In far northern Camas, Washington, there are open spaces that offer an opportunity to wander, especially in the doldrum months of winter. Last May, jvangeld reported on the development of trails on the west side of Green Mountain (viewtopic.php?t=30313), one of those Boring volcanoes that splatter the landscape around Portland and Vancouver. The City of Camas had purchased 115 acres on this west side, which includes the summit, in 2020. My wife and I went out and hiked the east side on two publicly owned properties, chalking up about five miles.

We began at a gate on 28th Avenue that marks the entrance to a rectangle of forested land owned by the Camas School District. There’s just enough room to squeeze in by the gate without blocking it, with perhaps a couple more spaces closer to the street. The school district does little with this property except, it seems, to dump a couple of truckloads of leaves there in the fall. There’s a trail loop around the property, so we went up the east side to hike along private fences and eventually reach the northwest corner. This was a very typical lush woodland of secondary Douglas-fir, grand fir, hemlock, and maple with invasives like holly, ivy, and blackberry.

The northwest corner of the school property ties in with the southeast corner of the much larger open space, which is administered by Clark County’s Legacy Lands Program. South of the county land and west of the school property, infrastructure is going in for one of those big luxury developments, now just in the pipe and pavement stage. However, a narrow corridor allows you to connect the two, and we soon swung left to follow the south side of Green Mountain’s long east ridge. These trails were mostly along old logging roads, and eventually we turned north to reach the power line corridor that runs north of the ridge crest. From here, we could see how close Washington’s Larch Mountain was.

We turned up the corridor to reach a private gate, but a trail leads from the gate back into the woods where, in short order, you can reach the summit of Green Mountain. (We don’t go that short distance as I had visited the summit from the west side last year.) We then descended the power line corridor on a grassy track, heading east until we picked up a now abandoned logging track that took us back up to the east ridge.

Once at the crest, we turned east on an actual trail. Almost immediately, I picked up on wood hobbit tracks (wood hobbits, or Fallohides, have longer toes for climbing than the interbred, mongrel hobbits popularized in Lord of the Rings, etc.). The tracks took us off the trail to a hobbit way shelter, empty but for a bed of sword fern fronds. There was a sodden blanket nearby of a tartan pattern. I am not an expert on hobbit tartans, but it was reminiscent of the MacBree clan design.

Well, we knew a Fallohide would not come out while we were poking around, so we pushed on through meadow openings planted with ponderosa pines and found out way back to the school property. We took the trail down the west side this time and then turned east to the center and the main road track back to the car.

Nice find! Wood Hobbit shelters are most rare, and to find one in such pristine condition rarer still. Maybe from the far north, given the tartan pattern on the blanket.
"Everything works in the planning stage".
Top

I thought hobbits were fictional characters

I thought hobbits were fictional characters

Fictional?, Nah - must be real, I heard about them on the internet.
"Everything works in the planning stage".
Top 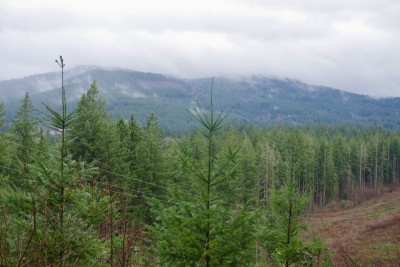 The picture shows Livingston Mountain, with it's main peak shrouded by clouds to the right and Little Baldy being a subordinate peak to the left.
Jeremy VanGelder - Friends of Road 4109
Top

Though, on further viewing, you might be able to see Larch above Little Baldy.
Jeremy VanGelder - Friends of Road 4109
Top
Post Reply
6 posts • Page 1 of 1