Chris A posted about the new Mt. Hood Meadows trails a few days ago, and I thought I’d add a little to the information. In general the new trails, a COVID project for the lodge’s 2020 summer staff and longtime wish of the owner, keep below the Timberline Trail. I did a loop from the main lodge to Picnic Rock and then up to Timberline, hiking west to the Umbrella Falls Trail and then back down to the lodge. However, I also decided to do a four-mile, 1700-foot EG diversion from Timberline straight up the mountain on the new Wizard Way trails (Lower Wizard Way and Middle Wizard Way).

The Lower Wizard Way is where I met a few other hikers, many of them having hiked up from the Stadium Express chairlift, which runs in the summer. The trail is well-benched, wider than the Timberline in fact, and switchbacks across ski runs and the narrow bands of mountain hemlock forest between. Bear-grass was still in bloom and the views opened up down to the Three Sisters. There was a little haze in that direction, but the skies in general were remarkably clear.

From the Mount Hood Express and Blue chairlifts, I took a jink west past a new ski patrol cabin and began the Middle Wizard Way trail, a far more interesting, untraveled, and more challenging affair although both sections of Wizard are rated the same on Meadows’ map. The trail was rubbly and uneven until I got to a bench where I met a couple who wished me “Good luck.” They pointed to a spot just above where they had lost the trail and turned around. I moseyed on up and, although I too lost the tread at a steep little scramble section where I didn’t think there should be a trail, I kept heading up and picked up the path again. In places, there are small flags and ribbons marking the route, which tells me this trail is perhaps a work in progress. Higher up, at the head of the Elevator run, there’s a bowl with a large snow bank, one of the sources of the East Fork Hood River.

Off to the right I was able to stare down the lateral moraine of the Clark Glacier to the terminus of that tongue under stark buttresses. The trail then climbed a rough route and traversed below a gnarly prominence that I’ll call Wizard Head. Again I lost the route emerging from krummholz outcrops of whitebark pine but picked up a couple of flags in the stark tundra above. These led me above Meadows’ highest chairlift, the Cascade Express, in a big switchback to the crest of Wizard Head at about 7,600 feet.

Wizard Head is the terminus of the Middle Wizard Way, but what of Upper Wizard Way? It must have been part of the concept, but it’s not on their new map. I suspect it would head higher up bare ridges in a sandy slog to the edge of wilderness and the Meadows permit area at 9,000 feet or so, a new high alpine sibling of the Mountaineer, Barrett Spur, and Cooper Spur trails.
Top

When I was putting the new trails into OpenStreetMap, I did wonder whither the "Upper." Looks like there's a moraine up there that could take you to around 9000' without too much trouble.

I’ve been up there on my Mt Hood High Route. It’s pretty good to 9000 where it starts getting a lot steeper.
Top

If you climb above the top chair you come to a point or buttress at 8,000 ft: 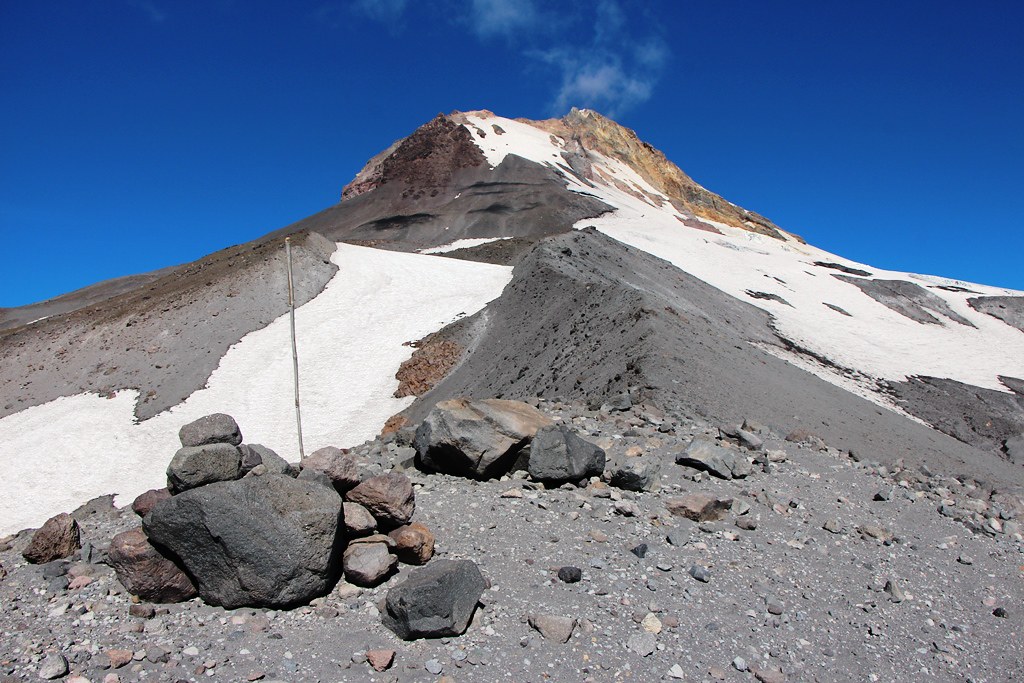 [/url]
I keep making protein shakes but they always turn out like margaritas.
Top

From Point 8,000 a use trail follows the moraine above the Mt Hood Meadows Permit area. In years past there has been a big crevasse in the Newton-Clark Glacier--about 9,150' elevation. The glacier has been thinning and thinning so perhaps this feature (the crevasse) will disappear. 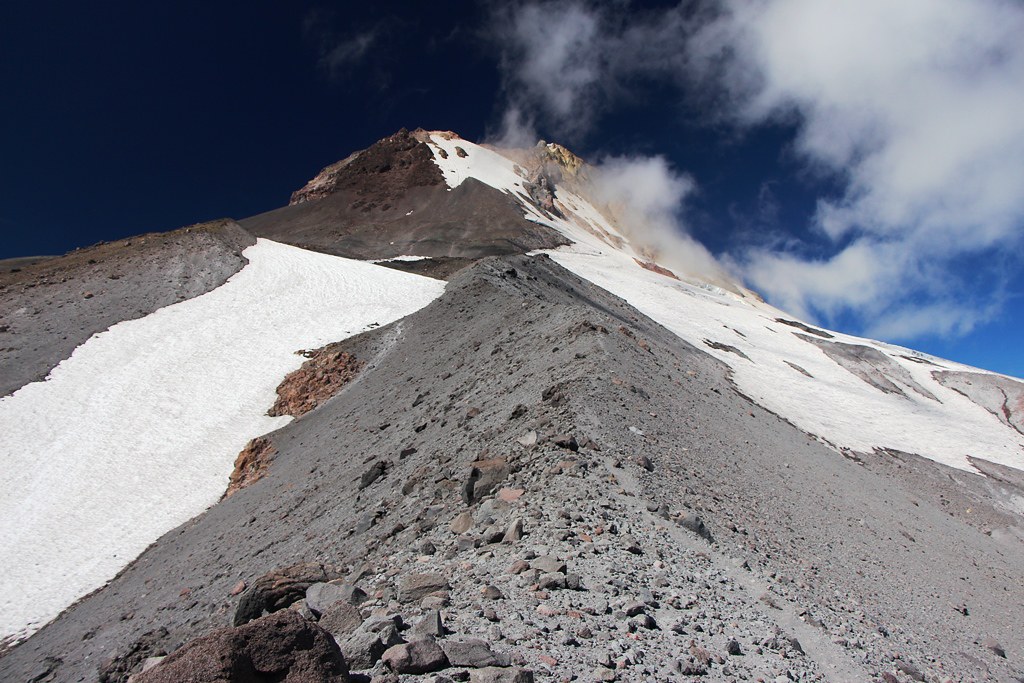 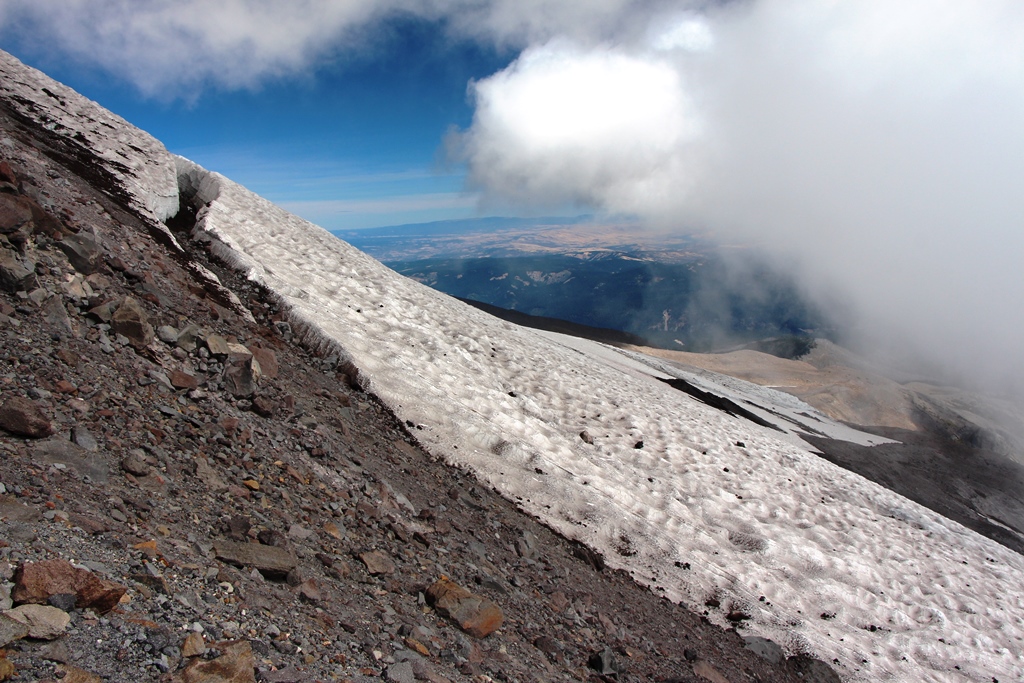 I keep making protein shakes but they always turn out like margaritas.
Top

BurnsideBob wrote: ↑
July 20th, 2021, 3:42 pm
The glacier has been thinning and thinning so perhaps this feature (the crevasse) will disappear.

That would be a shame.

Great! So the upper "trail" exists. I had no time to explore on Saturday but will be back at some point!
Top

It's kind of unsatisfying in the sense that it doesn't culminate at a specific high point. You just kinda go as high as you feel like, but presumably most hikers stop when they reach snow. In spite of that, it's a nice scenic place to check out. You can also drop off the crest to the left and explore gentle unglaciated terrain between Newton Clark and White River glaciers.
Top

Yeah some cool stuff to the left with some camps on sandy gullies.
Top

Great! So the upper "trail" exists. I had no time to explore on Saturday but will be back at some point!

To be clear, Mt Hood Meadows didn't build this trail, it is a use trail. I suppose they could claim credit because most users were boot packing skiers climbing to access Super Bowl, the top of Meadows's permit area.

The area to the left (south) of the moraine trail has been called Skylar Bowl by ski mountaineers.

Anyhow, if you continue climbing past the crevasse shown in my previous post, you are above Mt Hood Meadows permit area. If you go up to about 9300-9400 feet this is the view: 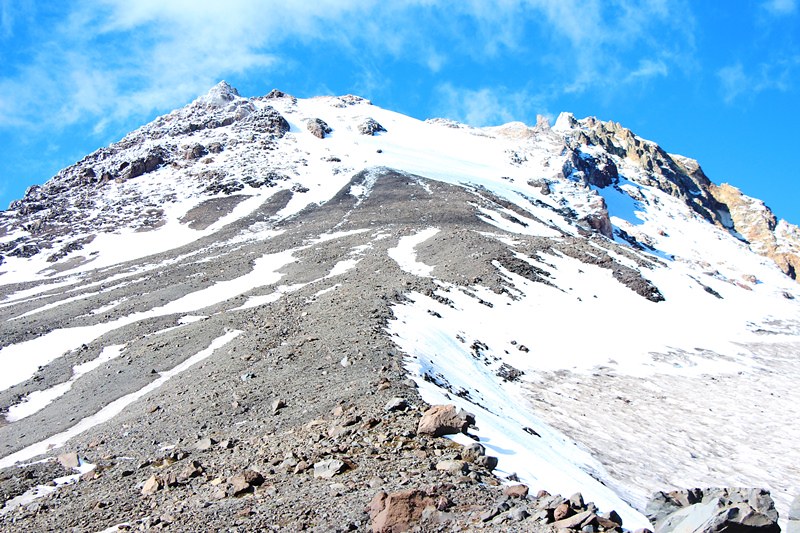 And if you turn left, as Chip suggests, you can traverse the scree field over to the moraine above the White Water Glacier. Climbing to the 9300 foot level puts you above the more incised drainages with their little climbs in and out. There is a very large boulder perched on the White Water Glacier moraine which can serve as a navigation target, although you can't see it until you've contoured some distance to the south.

This is part of the view from that boulder: 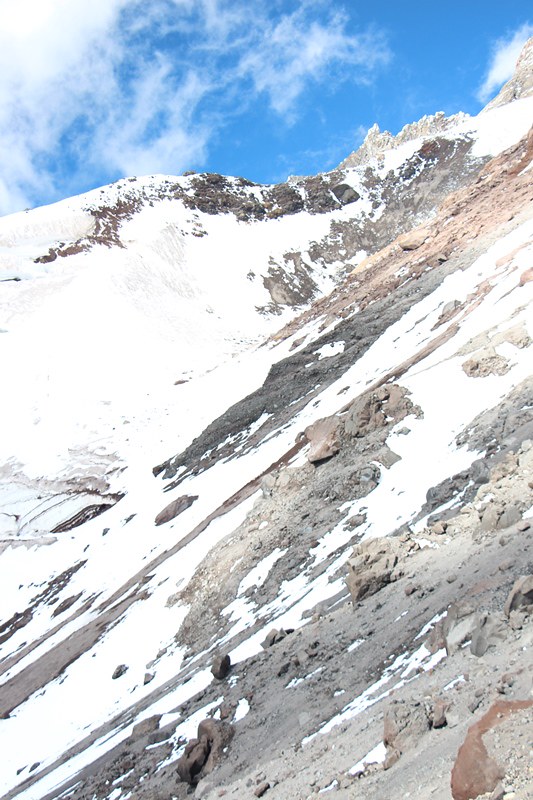 Some very great views but be aware of rockfall. In this photo you notice the big rock is a different color. If you look up you'll see where it came from. You don't want to be in this area when the rocks are thawing out. I was up there when it was COLD. 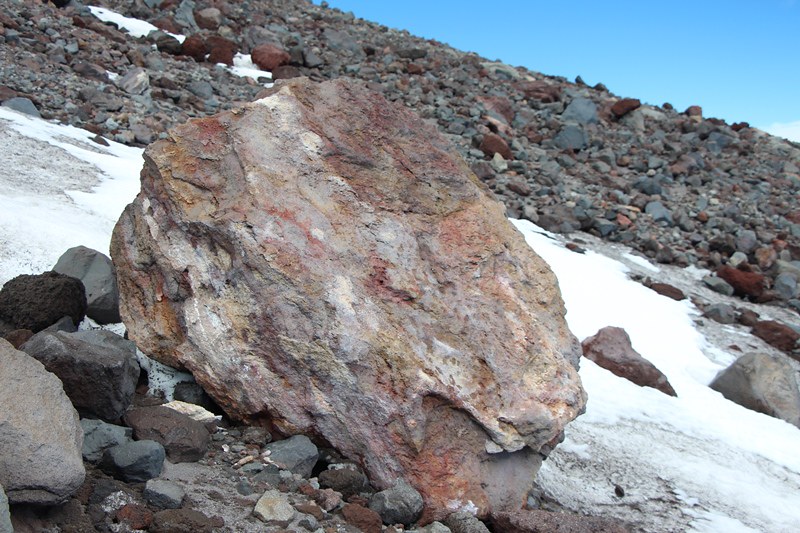 Happy Off Trails
I keep making protein shakes but they always turn out like margaritas.
Top
Post Reply
14 posts