If you've hiked PCT northbound to Table Mountain, you might remember Gillette Lake, with its distinctive green color and overhead powerlines. Gillette's outlet creek tumbles steeply for a short distance, and feeds Kidney Lake, which was my goal today. I used a menagerie of roads (some active and some abandoned), trails (including the PCT which I was surprised to encounter), and some cross-country connectors. More than once, I came across the back of signs forbidding entry, but there was no need to disobey signs to get where I went, nor was there any need to bushwhack parallel to a gated/signed road (that's really bad form, and obviously cheating).

Weather:
Was supposed to be dry and calm, but it was windy and wet when I left my car at dawn. Things quickly got better. Wind never really subsided, but things dried out, and I even saw a little sun.

Snow:
Oops! I guess I got a little overconfident with this Junuary we've been having. Didn't realize the gorge picked up a few inches. The steepest section of road was a bit unnerving when my muffler was scraping. The hike wasn't too bad, but every time I hit a bare patch and doubled my pace, I realized how much the snow was slowing me down.

My first four pics were taken at the most scenic spot of the day. I bet I spent an hour exploring. Found some small depressions that must have been Vision Quest sites.

That was surprisingly easy to scale.

Looking over at Oregon.

One of many un-named lakes in the Bonneville slide.

Brutally windy, didn't linger. Notice benchmark. Lovely spot, but didn't photograph well. Note: I don't buy beer made by the evil empire, but it would be rude to refuse such a generous gift.

photographed in situ (exactly as found). Very remote spot, surprising to encounter this.

Nice picture of the Totoro in profile in the background! Was the snow as mushy there as it was in the Oregon side yesterday? 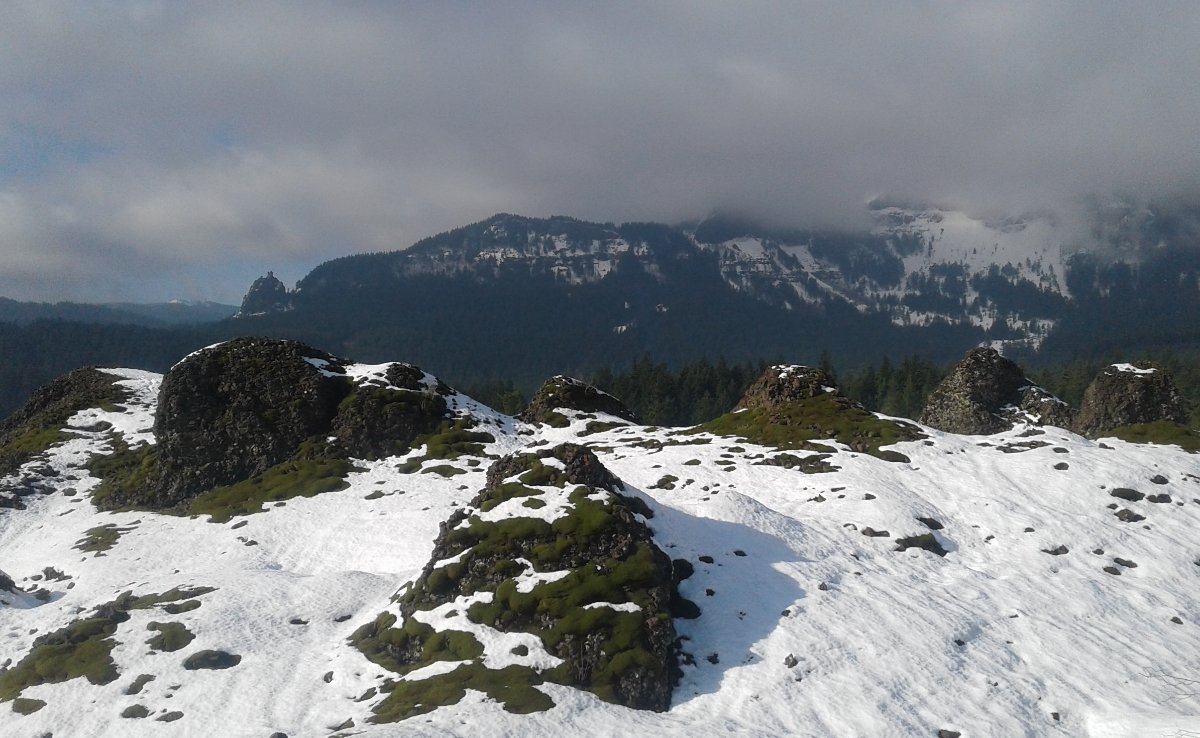 Will hike off trail for fun.
Top

Quite slushy, yes. I was grateful that the trees were all melted out (no slushbombs dropping on me).
Top

What year is on that nickel?
- Michael
Top

Haha, yes of course. I only use nickels from 1990 and as it happens, no one else does.
- Michael
Top

Oh good, you found my nickel. I lost that thing last spring and haven't got a decent night's sleep since. You can imagine how it must feel to lose a nickel to a penny-pincher like me.

Good to see I made the right decision this weekend regarding a hike int he Gorge. I suspected wind and lingering snow after waking up to snow at home on Friday morning. Never a good sign for Gorge walks when you have snow on your car's windshield in the driveway.
Top
Post Reply
7 posts • Page 1 of 1