Great Walk #2 - Milford Track - “the finest walk in the world”

Totally lived up to the hype. The Milford Track is in Fiordland, where it averages 182 days of rain a year. “Bus stops” are built into the track for hikers to wait for flooded streams to subside enough to cross. The track was scouted and built to take tourists from Lake Te Anau to the Milford Sound, following the Clinton River up to its source at Lake Mintaro, up and over Mackinnon Pass, then following the Arthur River and its many waterfalls down to the Milford Sound. Lush valleys, craggy cliffs, alpine flowers, birds, giant eels, scenic vistas and waterfalls abound.

Also SANDFLIES. Legend tells that the god Tu-te-raki-whanoa had just finished carving out what is now called the Milford Sound - carving it with his adze - and it was amazing... so much so that everyone just kind of stopped and stood around in awe. The goddess Hine-nui-te-pō decided that such a beautiful place was too tempting and if people spent too much time there, they’d make a mess. So she created namu (sandflies) to encourage them to move along. And that is why one always finds sandflies in the most beautiful places.

The Milford Track is quite beautiful and we were lucky enough to walk it with only 5 minutes of rain in the 4 days we were on the track (also over Christmas, which just made it more special). The waterfalls were maybe not quite as spectacular as they would have been during wetter weather, but still impressive. For me, the highlights really were the birds. This is an area that has been aggressively treated for predators, both with ariel drops of mammal-specific poison baits (kills the mice and rolls higher up the food chain to the stoats and weasels) and with trap lines. So there were so many more birds than we saw anywhere other than the pest-free sanctuaries. There were weka (think carnivourous chicken), robins (NZ robin is small, rotund, grey and fearless), kaka (forest parrots) and kea (cheeky alpine parrots, the ones who eat tourist cars), paradise ducks and whio (alpine ducks). Kiwi resident in the area, but we didn’t see them, only heard faint “kiiiiiwiiii” calls late at night. Whio were a special treat for me - they live in alpine streams like an ouzel/dipper - there was a pair high up on the Clinton River with little dabbling ducklings! Kea love to pull/tug/destroy - we were warned to tie our boots together because they can carry off one, but two are too heavy. Spent a delightful morning watching them explore the deck of the Mintaro Hut, rescued a pair of socks, made rock and grass sculptures for them to destroy (this is an approved enrichment activity - no feeding or giving of human objects).

The rangers were older and quirkier than any of the others we met. Well-steeped in natural and local history, their hut talks (and nature walks) were informative and engaging. They also do an incredible of trail maintenance - the Milford Track is one of the best trails I’ve ever walked on, especially considering the terrain (challenging, flood-prone) and weather - wet (~250 in/year), severe. There is a LOT of water coming down and flowing over the trail, occasional earthquakes and “slips” (landslides).

I was surprised at the solitude we found. We spent each night with the same 40 people and there were also ~40 hikers on a guided walk (private, showers and meals provided) that we never even saw (although we took advantage of their tea/billy huts, stopping for a cup of coffee or hot chocolate in a sandfly-free environment. However, we would walk all day, rarely seeing a soul until people started to trickle into the hut in the afternoon. Evenings we’d swim, chat with other trampers, listen to the hut talk, play cards, read books and magazines curated by the rangers or left behind. A nice mix of solitude in nature and convivial company.

More pictures because it wouldn't let me put them all in...

Amazing to see those blue skies in some of the photos. Obviously a once-in-a-lifetime kind of experience. Thanks for sharing it.
Top

Great report. Unfortunately, I was in NZ too early in the year to do the Track. Did a lot on the North Island and north half of the South Island, though.
Top

Thanks for the post! I was lucky enough to do the Milford Track back in 2014. It was without a doubt the most spectacular hike I've ever been on! Your pictures brought back so many memories I had to dig out my own pics.

I made this on google earth to plot the route we hiked. 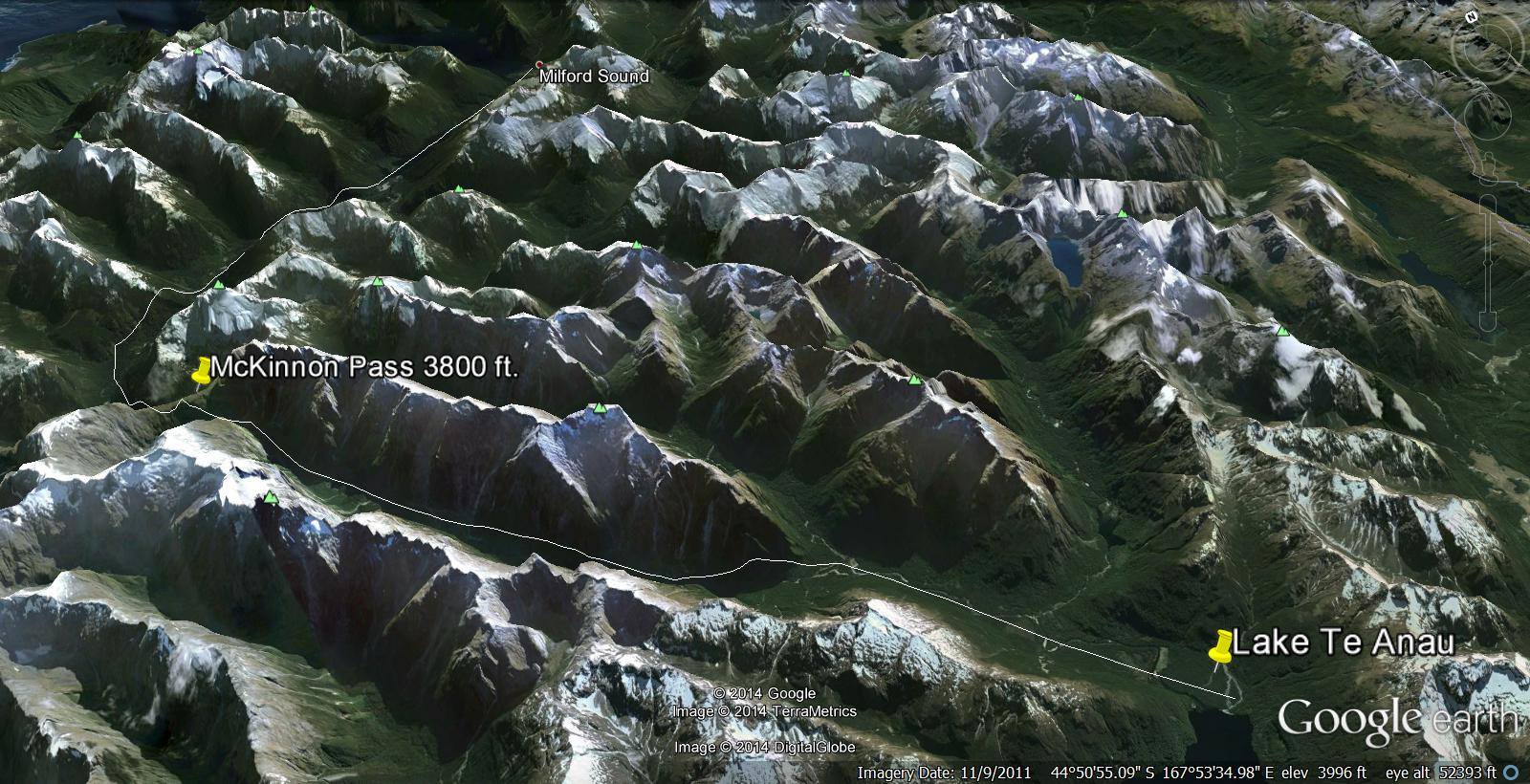 The Clinton River. It is so isolated and clean you can dip your cup in and drink without fear. It really is that color too. I haven't altered the pic at all. 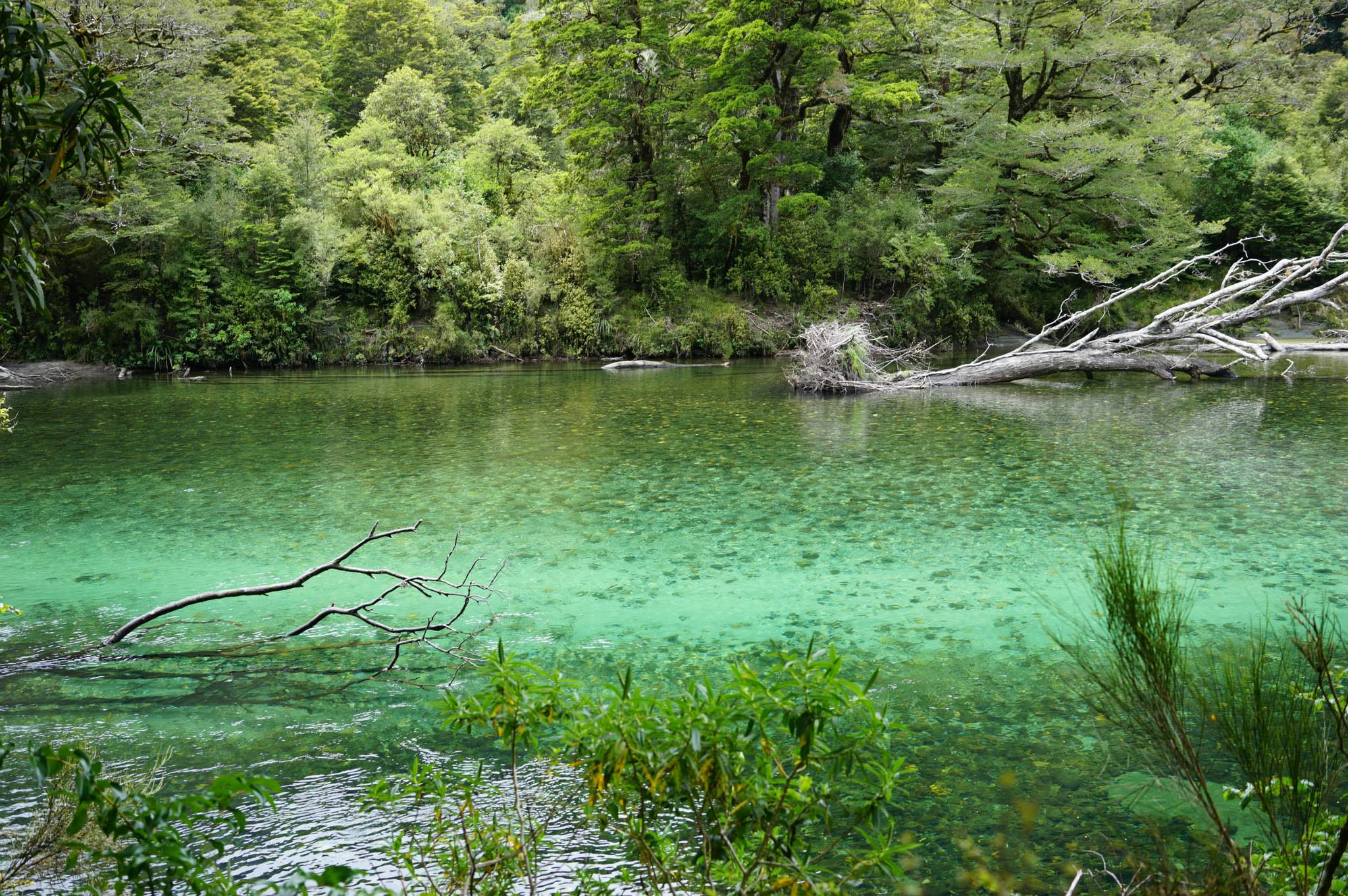 A long flat, narrow valley several miles long with cliffs so towering that clouds drift through them and waterfalls fall from far, far overhead. I think this is the second day? 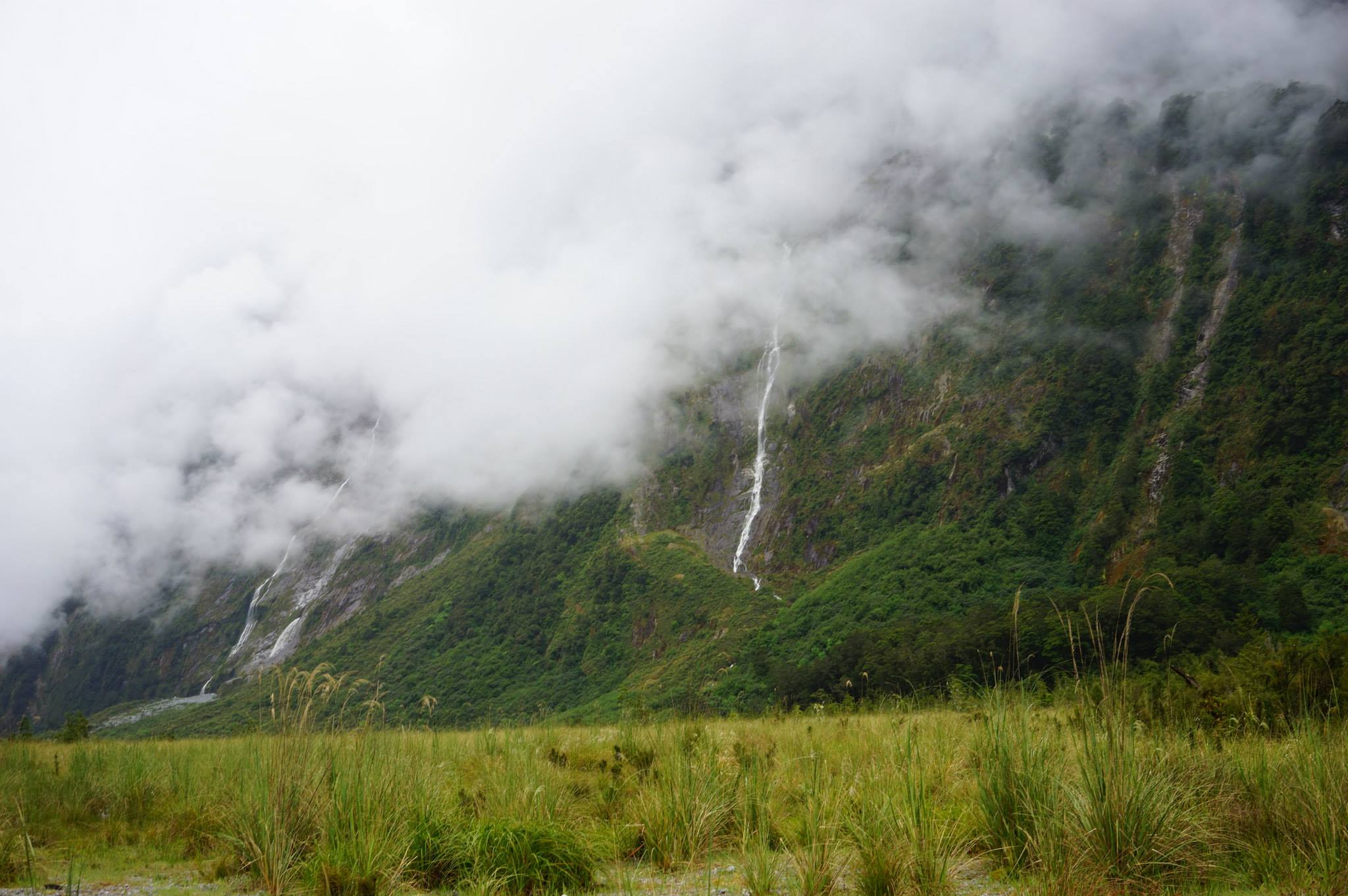 The view from the top of Mckinnon Pass. 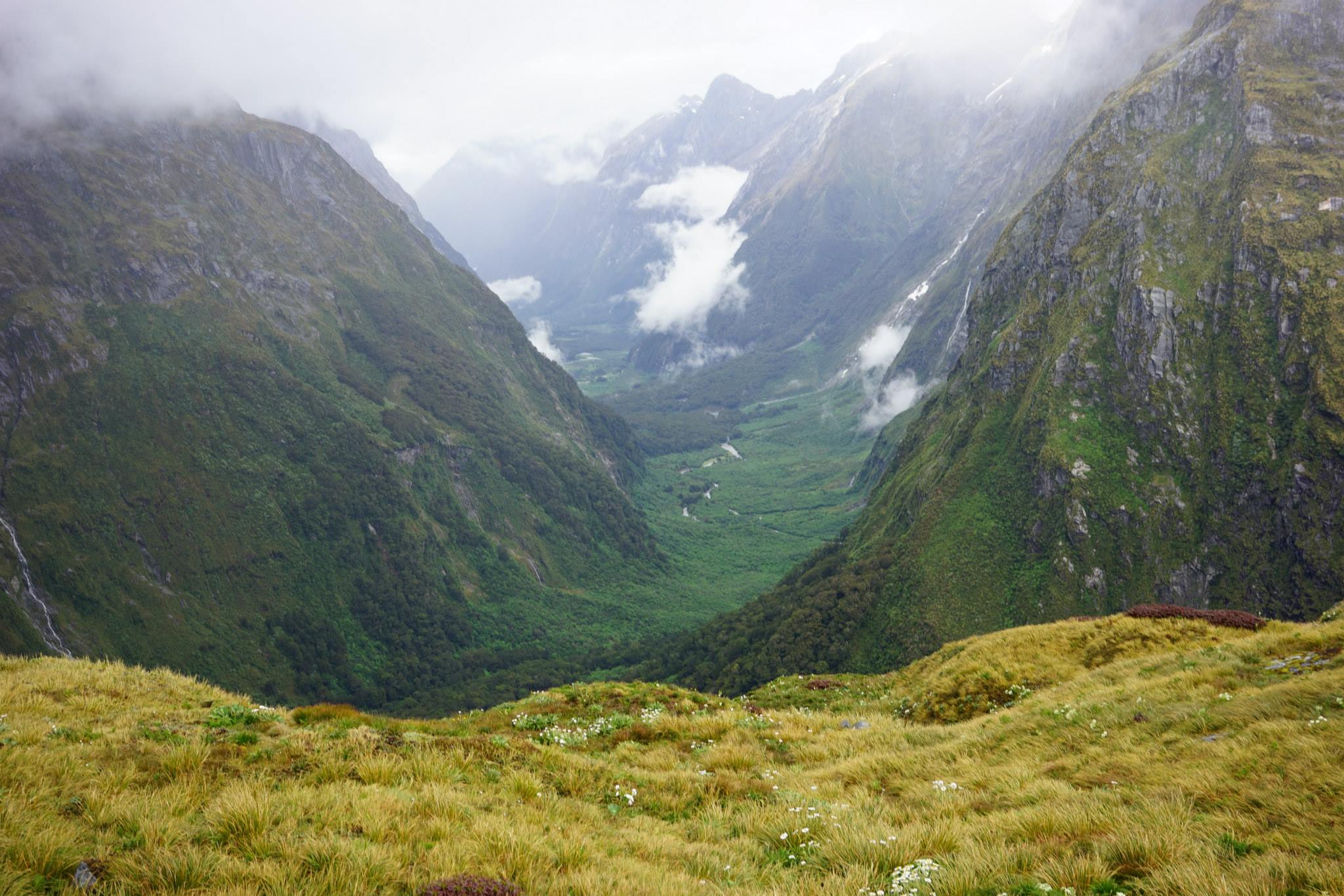 Once you're up to the top of McKinnon Pass you look down into a valley on the coast side of the mountain and the plants totally change into something almost tropical and you start down a long series of wooden stairs. I kept thinking I was in Rivendell. 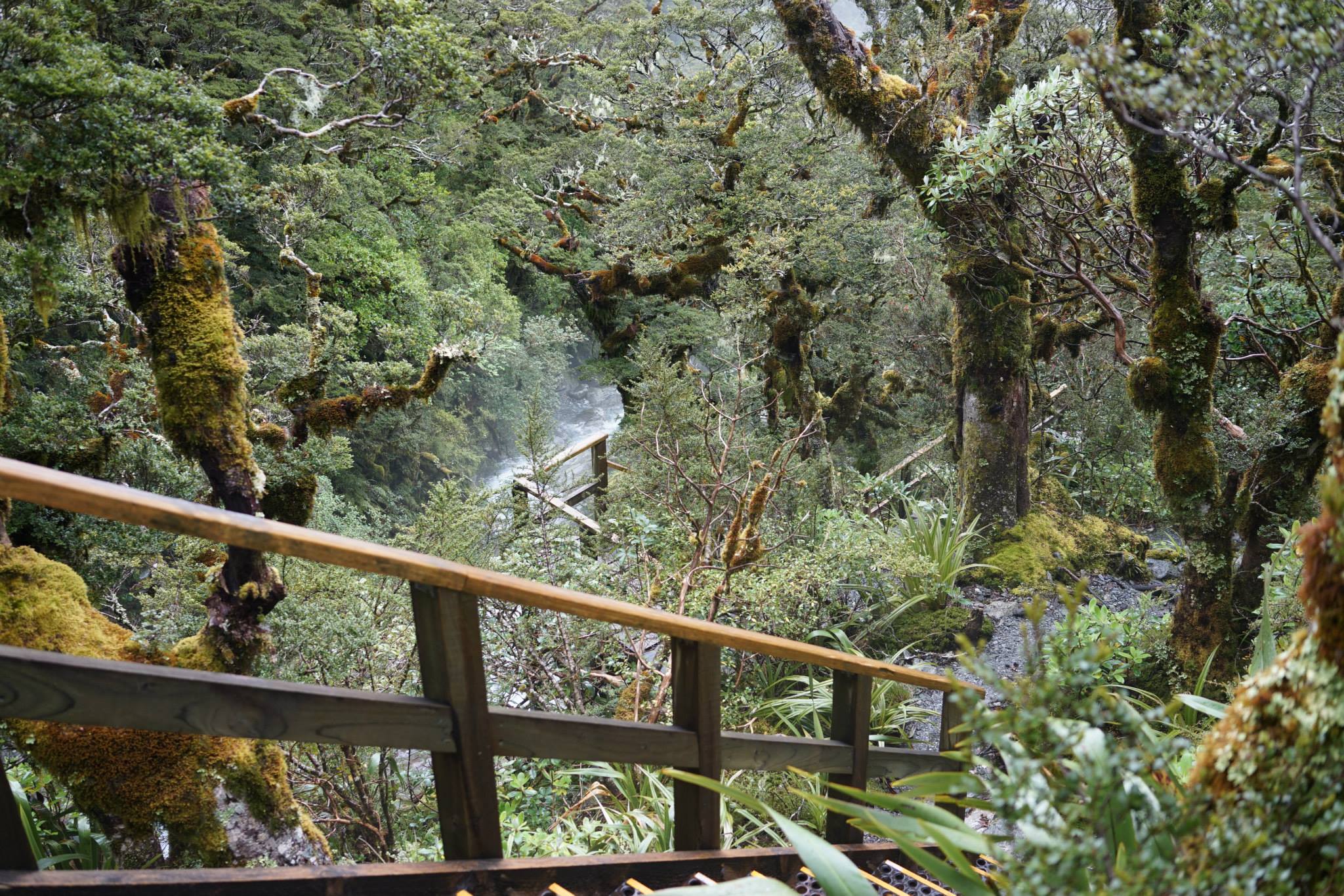 I don't have many pics from the last day of the hike or when we reach Milford Sound because it rained all day long. It was warm though so it wasn't a big deal, but I do distinctly remember when I realized my feet were already so wet that it didn't matter whether I went around the puddles or not.

Thanks for the post! I love all the pictures of the birds. So many cool ones! We did have a guy in our group that didn't heed the Kea warnings and lost a boot.
Top
Post Reply
7 posts • Page 1 of 1