I got in a couple of hikes during my annual 4th of July trip to the Wallowas.

This was not super interesting - just an out and back forest walk, 5-6 mi each way. The meadows were nice but were very buggy and the trail is marshy in the middle. 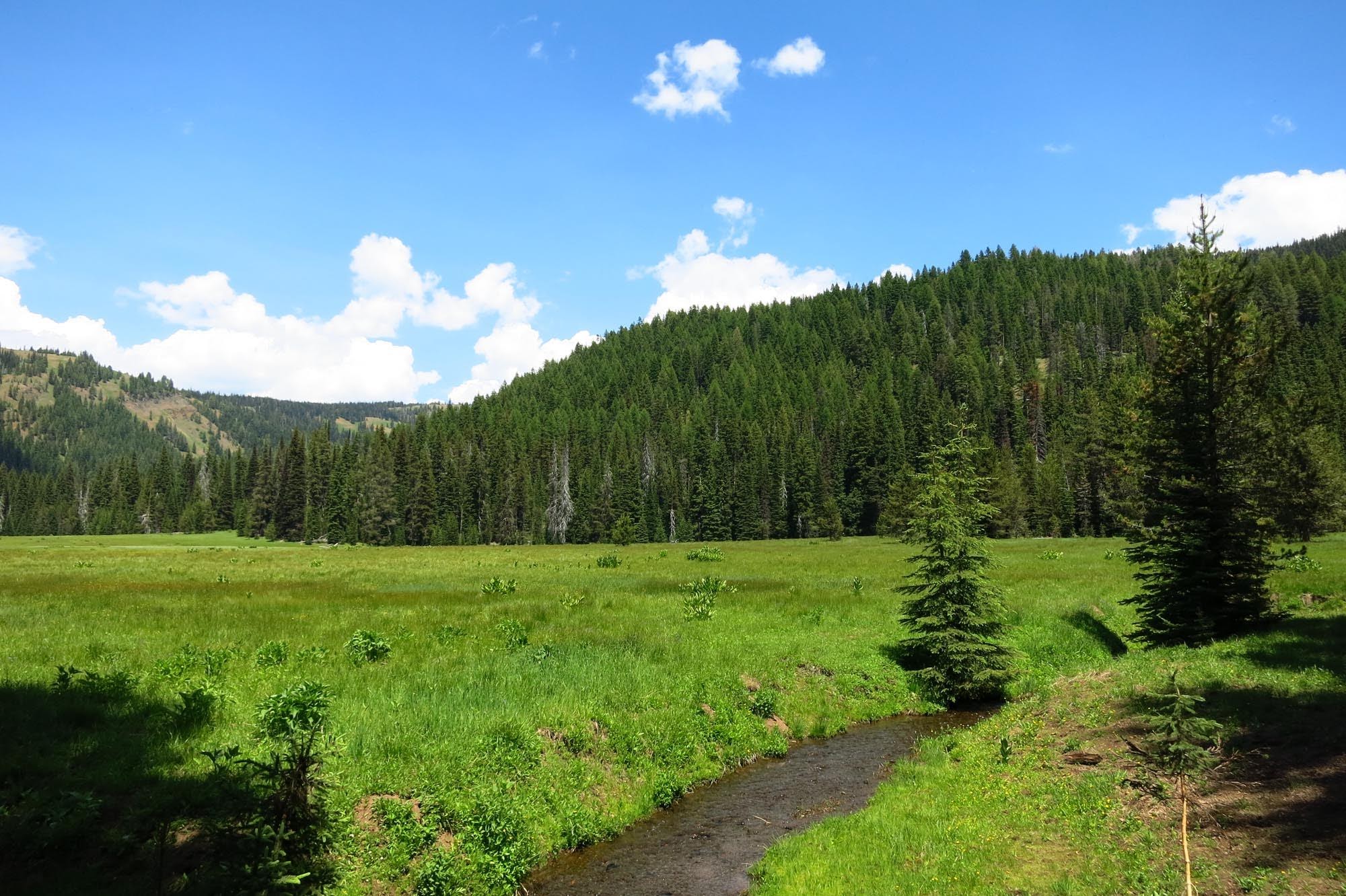 I got a tip from a local about using the unsigned alternate TH off Squaw Creek, vs the new Buck Creek TH. It's a little hard to find - I drove past it to the top of the road and then spotted it on the way back down. Really high quality gravel roads to get out there. There were 2 rather annoying creek crossings (first Squaw Creek, then Catherine Creek), and I wasted time walking off the trail to find log bridges so I wouldn't have to ford. The trail then heads progressively uphill through forest, until around 7000 ft you start encountering nice Wallowas granite and get your first view of China Cap. 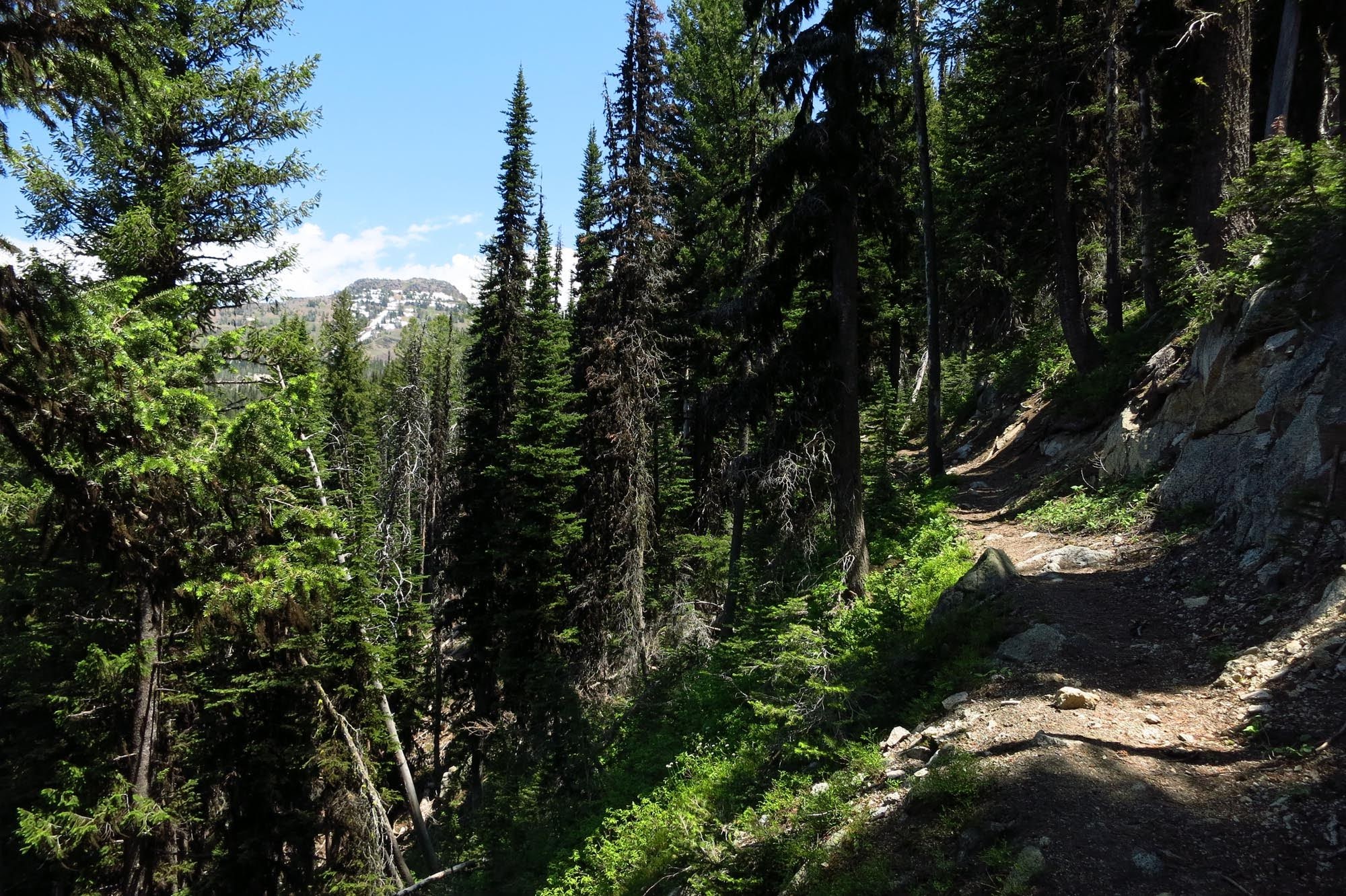 Massive avalanche field under Burger Butte. I heard this was from only a few years ago. 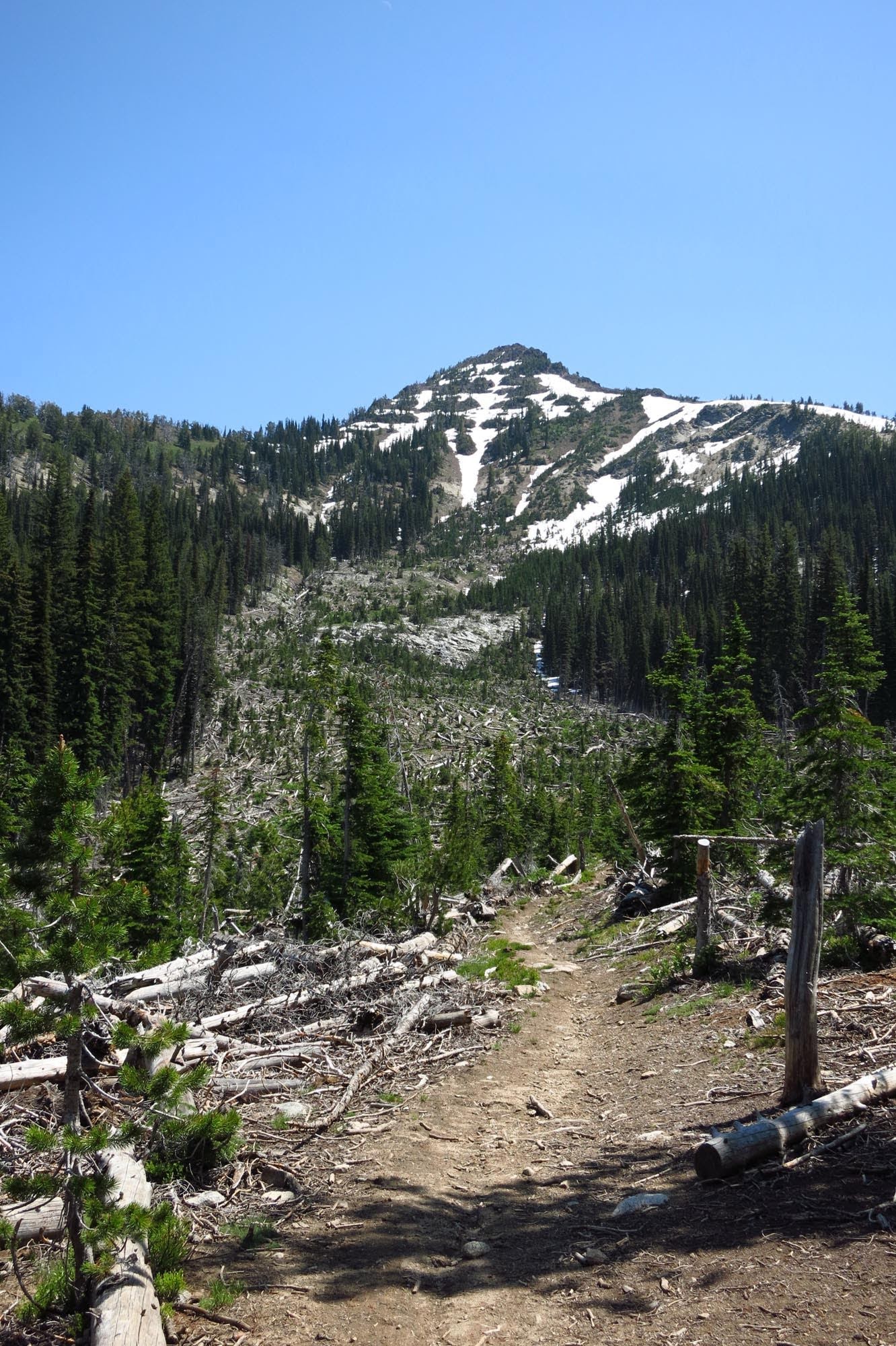 Looking back down towards Catherine Creek. These are basically the western foothills of the Wallowas. 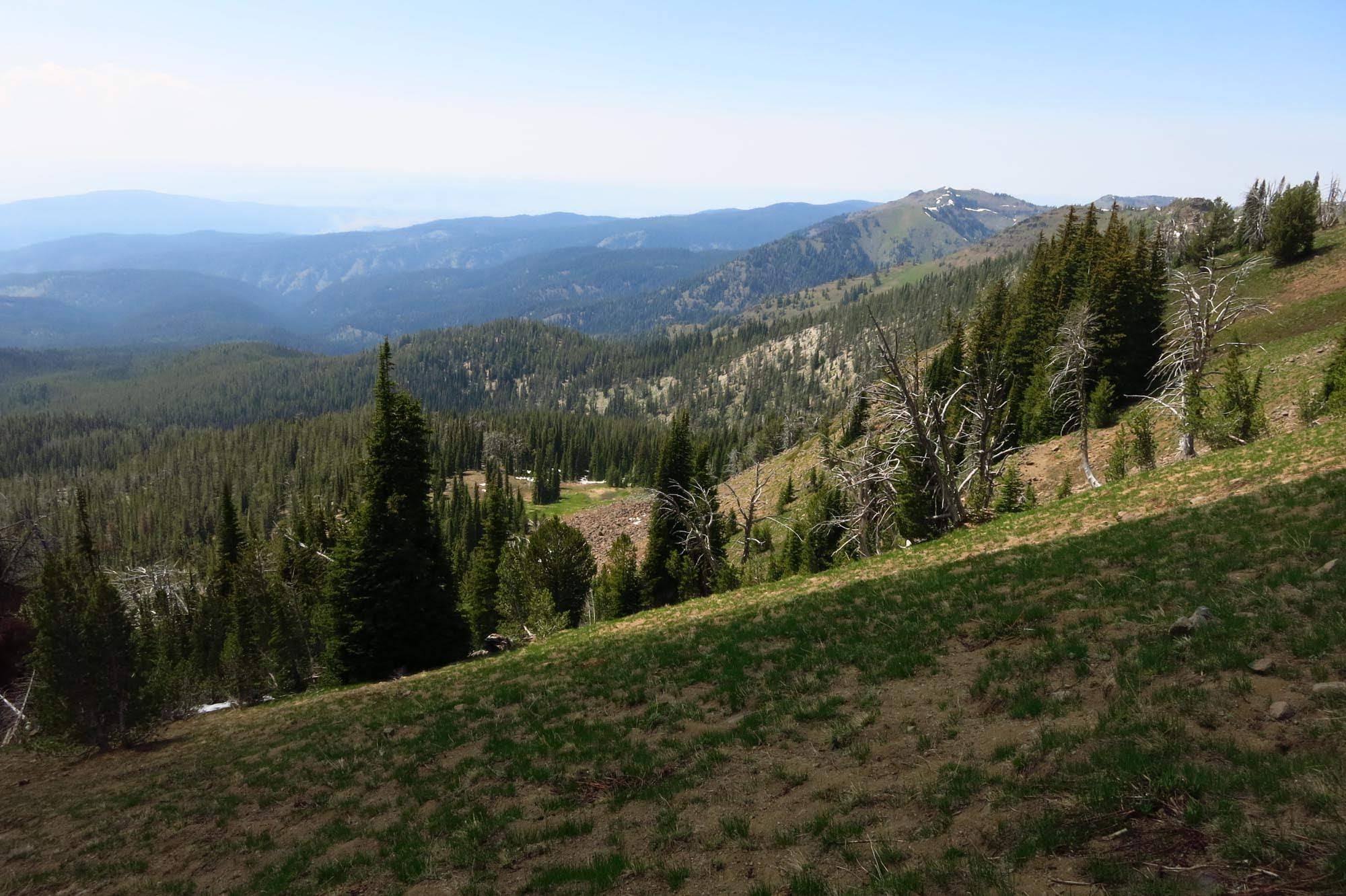 I came upon the junction with the trail that switchbacks south towards Burger Pass and decided to head directly up to the south ridge, which turned out to be really steep. I caught the ridge a little above 8200 ft and faced the summit block, which actually has a nice, direct route straight up the middle, in the trees. 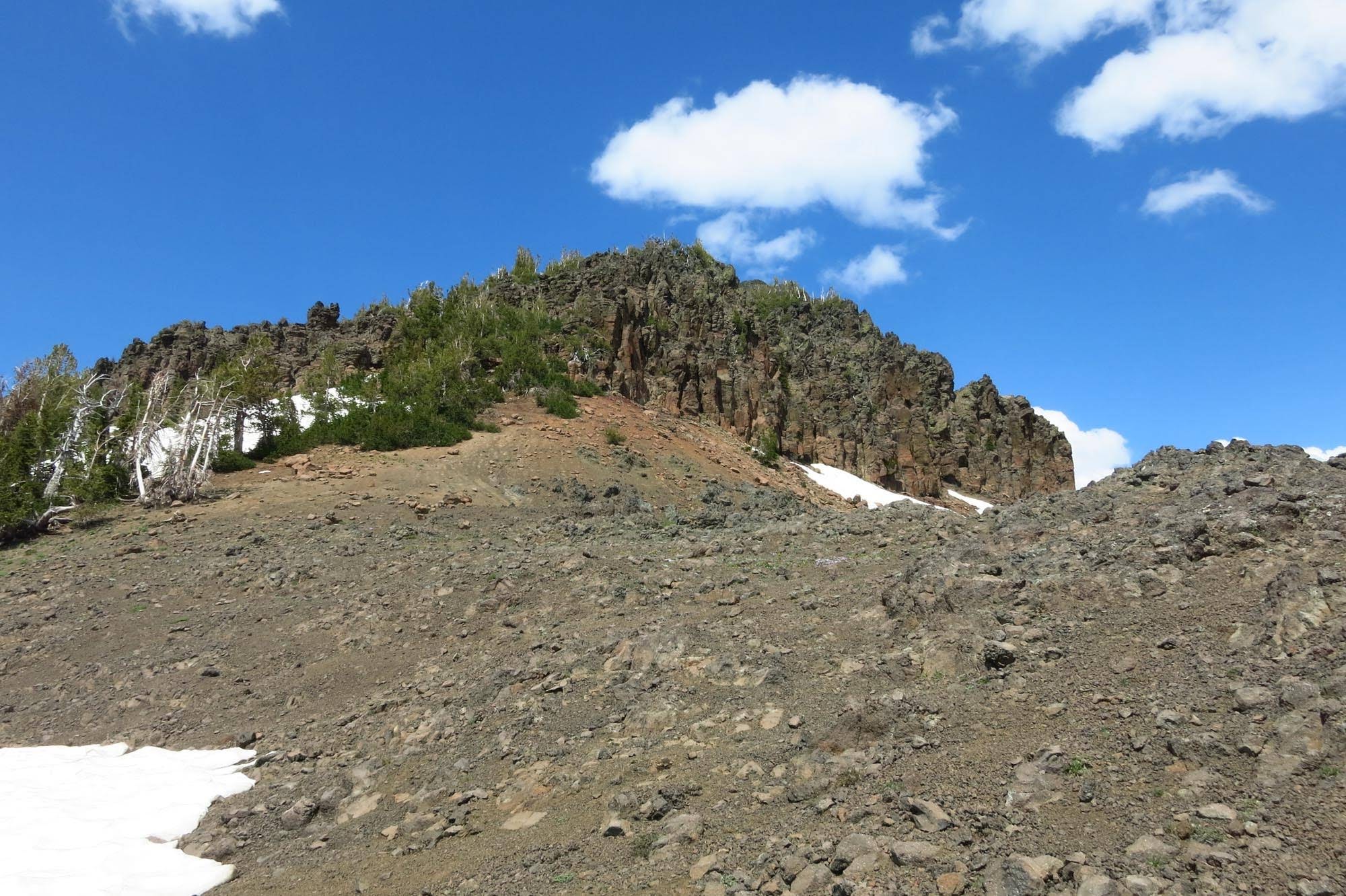 The picture makes this look steeper than it was - it was just like a staircase, hands barely needed. (The rock pile on the left is actually a cairn.) 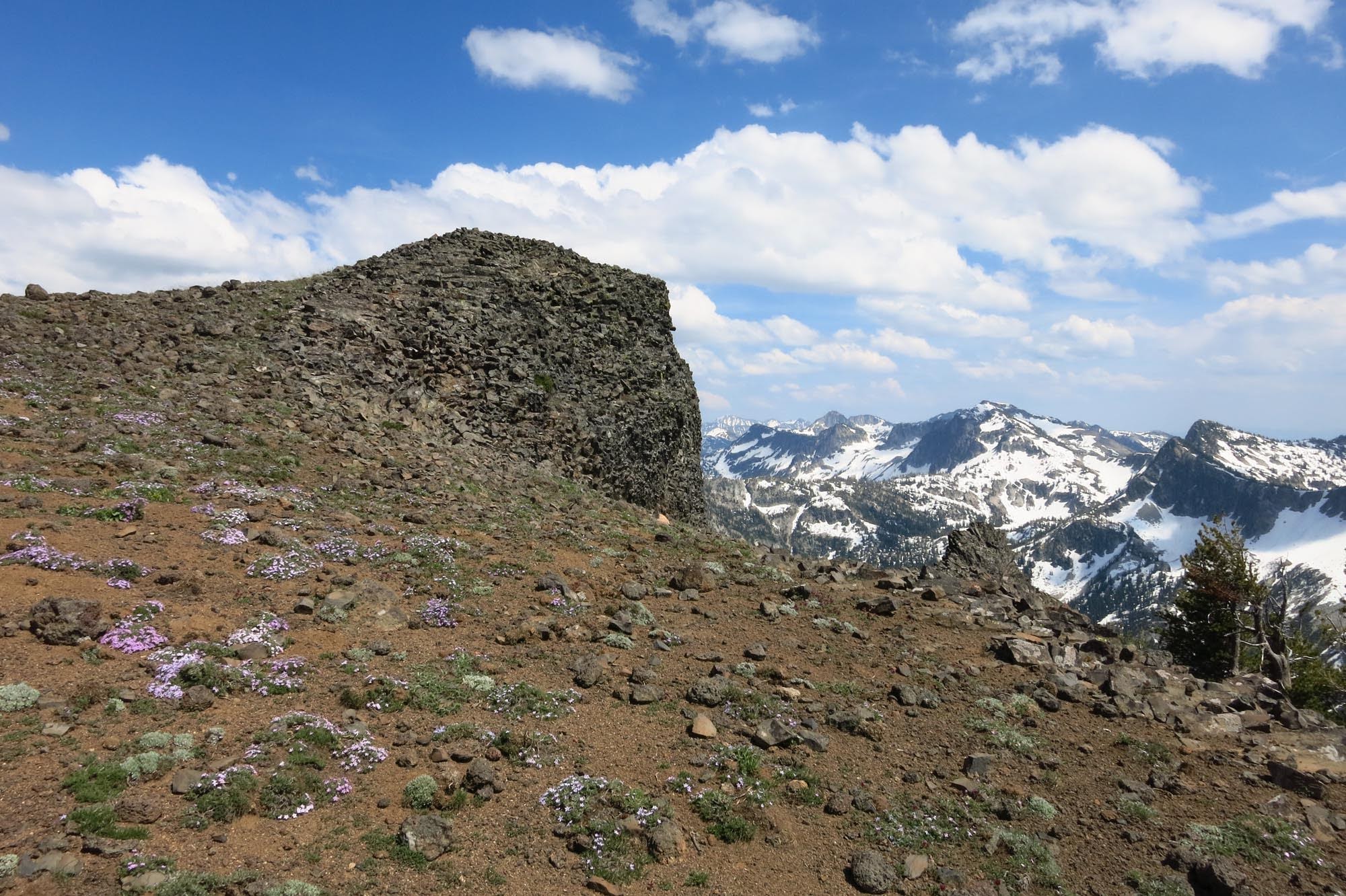 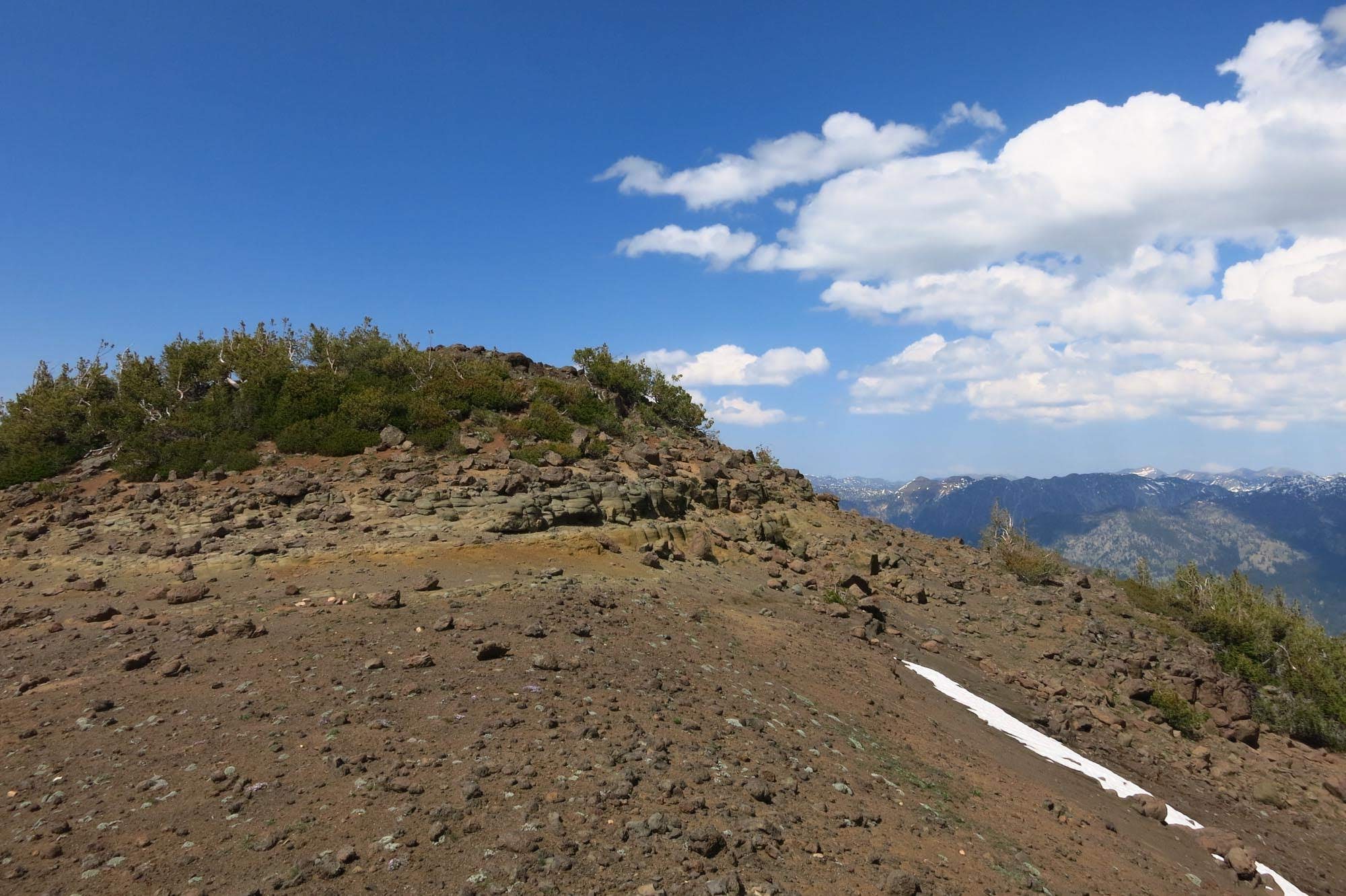 Looking southeast, along the southern ridges of Eagle Cap. 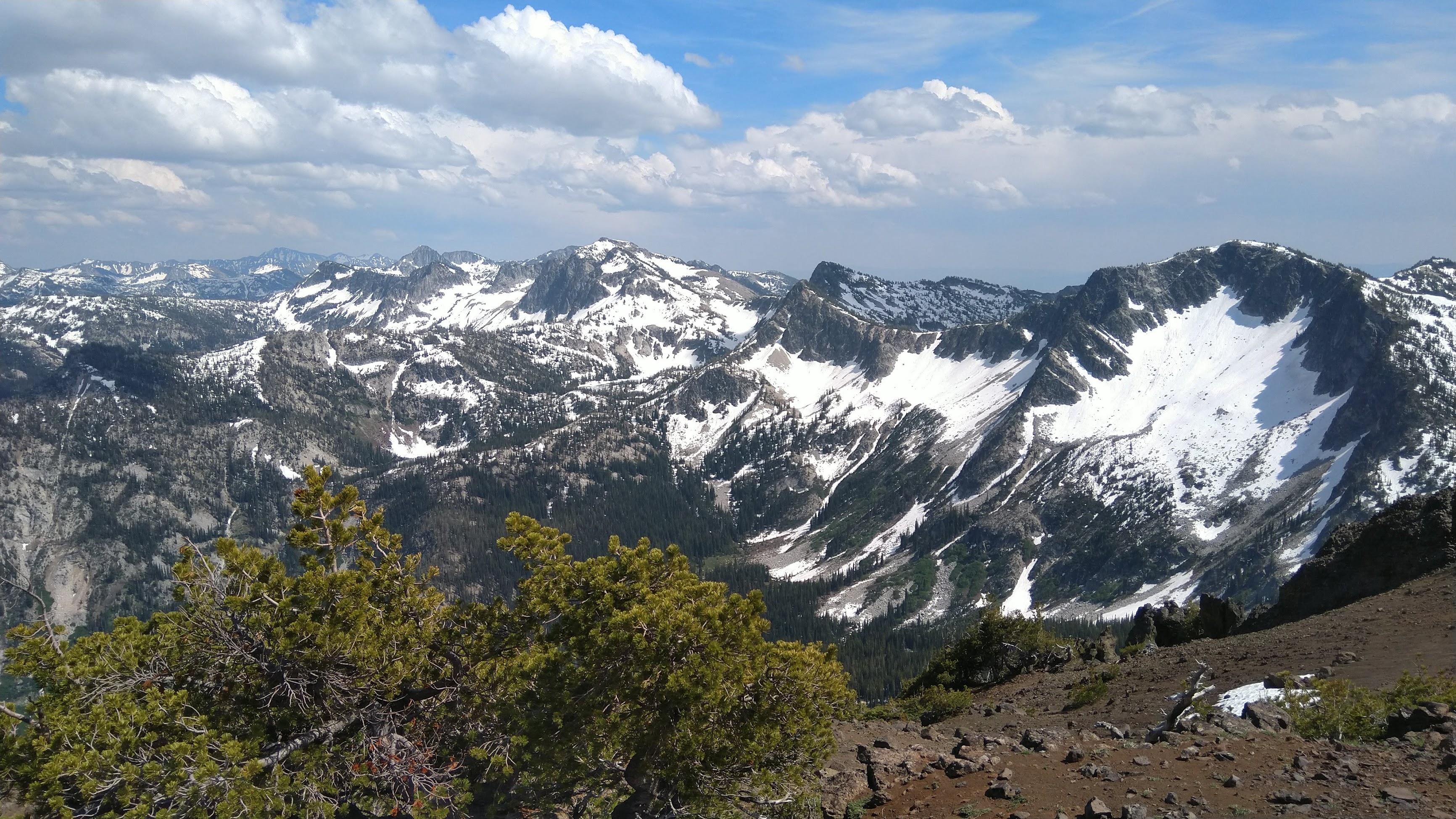 And looking a little more northeast - the Matterhorn is the whitish (non snow) peak about 2/3 of the way to the right side in the far distance. 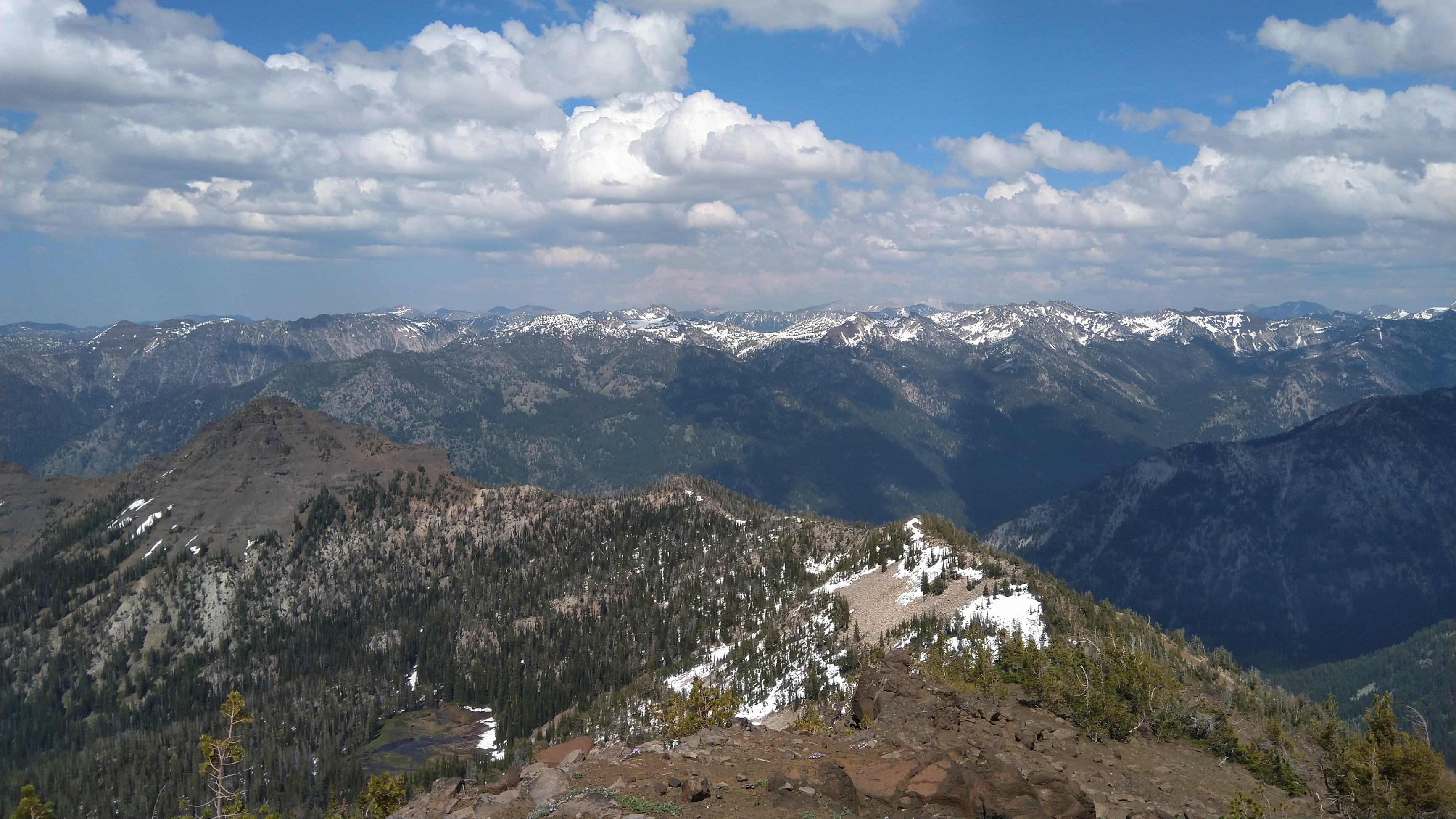 Looking NW along the ridge towards Squaw Butte and Meadow Mountain. 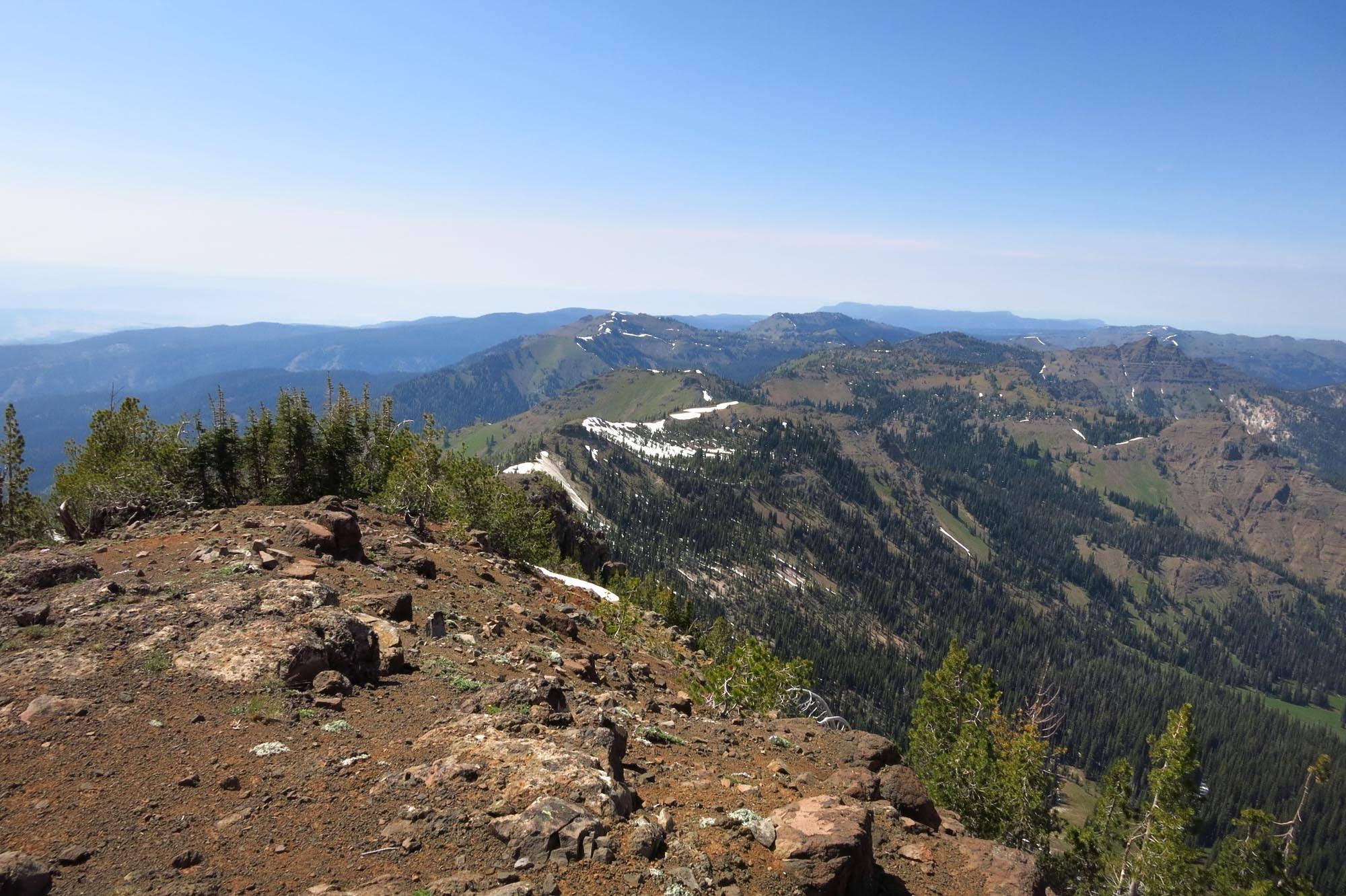 After basking on top with a flock of ladybugs, I bade the summit farewell. I planned to drop off the NW ridge, but it turned out to be a little cliffy, so I backtracked and descended about halfway back to the south ridge, then cut NW across the slope, eventually picking up an elk/user trail that led down to the pass below (probably a better ascent route). En route I followed the north face of China Cap, which is quite precipitous. 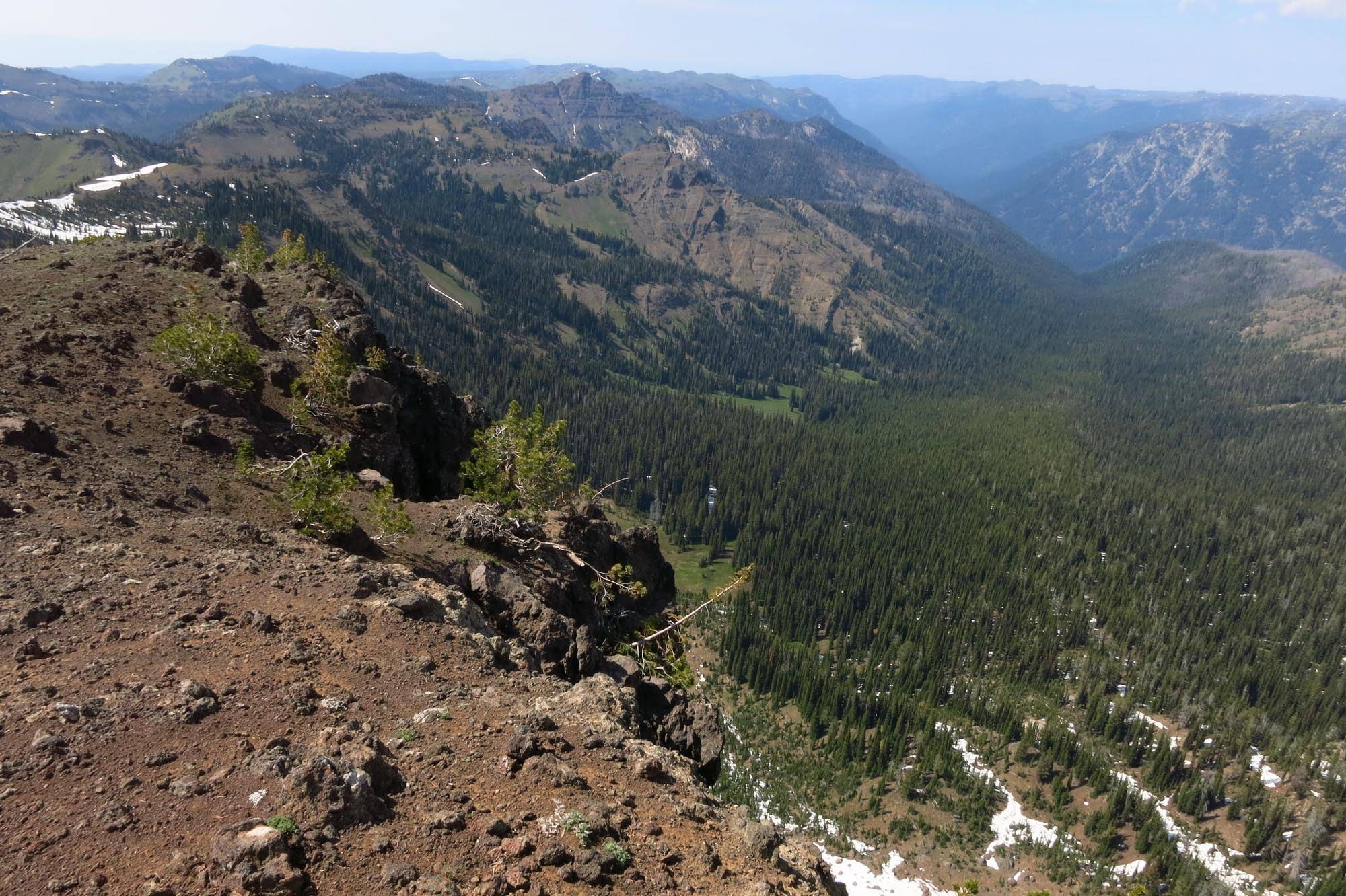 I'd gotten a late, DN-style start after a leisurely breakfast, so it was a bit late in the day at this point. I had thought about running the ridge out to the Squaw Creek trail and then taking that down to loop, but it looked to be a bit longer, and the trail down at the pass headed straight into a big snowfield on the eastern side of the ridge. I had an axe and microspikes, but didn't fancy messing with the snowfield, and pioneering a dry route around the western side of the ridge would be doable but would eat time, so I decided to head back the way I came so I could be back by dinnertime. Backtracking along the trail I'd skipped on the way up, I had a nice view of Burger Butte, which looks like it'll be a fun scramble next time I'm out there. 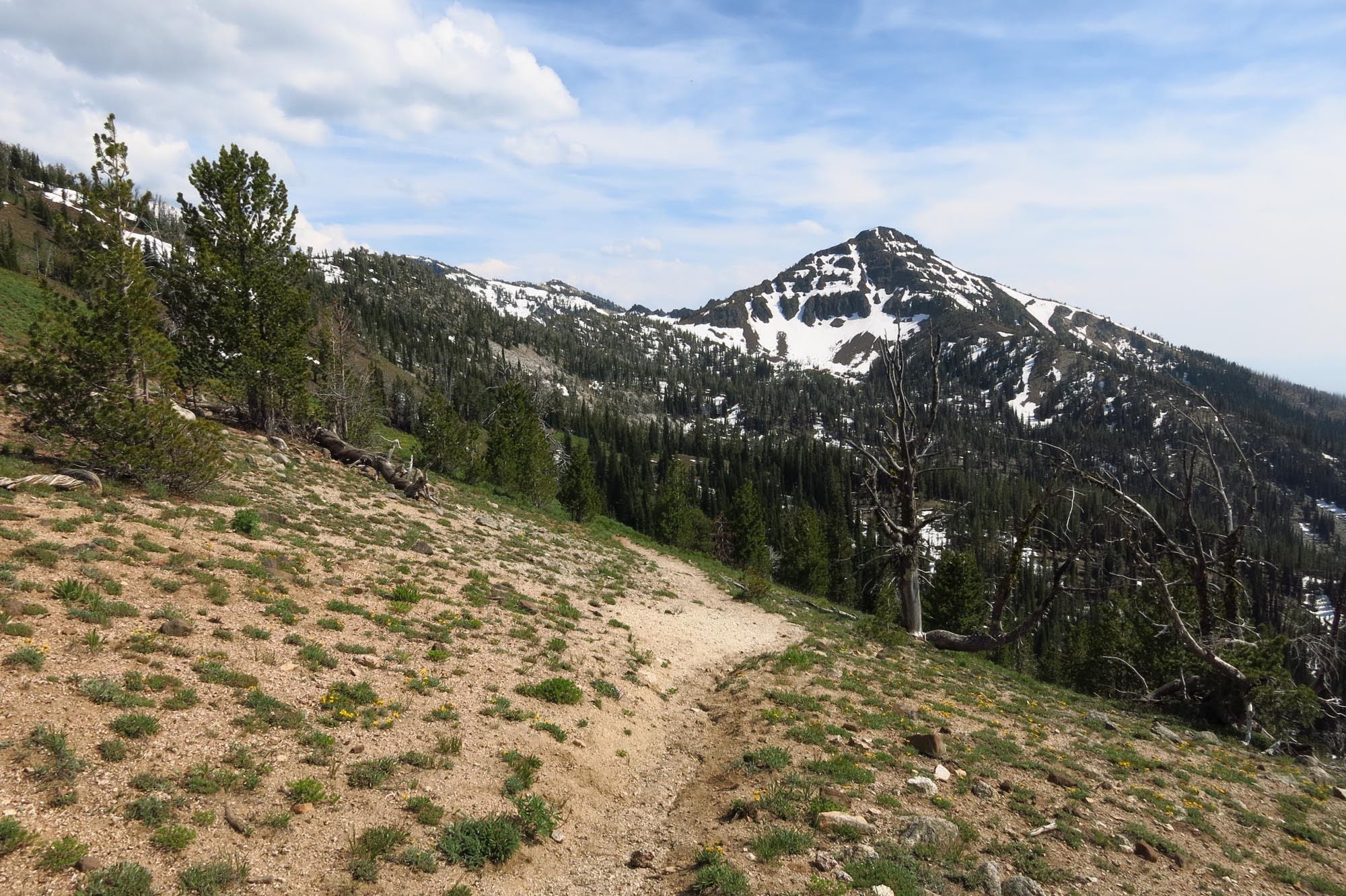 I ran down a good portion of the trail, including some misc shortcuts through open forest, and forded the creeks this time, which was still faster than the log detours, even with taking my shoes off and putting them back on twice! Total time was about 6.5 hrs round trip. GPS track says 10 mi and 3700 ft, so like a Nesmith at altitude with a better view.

Big avalanche for such a little mountain.
Top

Thanks for the report and the beta on ascending China Cap. A few years ago, I was going to attempt this also as a day hike. I didn't even get out of my car. It was September, and bow hunting season had just begun. The parking area was full of horse trailers and massive horse and mule trains were sending off clouds of dust up the trail. I turned around and fled!
Top

Great report. I've wondered what it was like over on that side of China Cap. Just to be sure I'm oriented right, that big avalanche was right on the north face of Burger? I've also pondered what that steep north face of China Cap must look like. I've only seen it from the southeast, from the little pass just south of Tombstone Lake:

did you knock over the stack of rocks (cairn)?

kind of buggy a few days later when I was there. Some people borrowed some of my DEET
Top

bobcat wrote: ↑
July 11th, 2019, 3:17 pm
Thanks for the report and the beta on ascending China Cap. A few years ago, I was going to attempt this also as a day hike. I didn't even get out of my car. It was September, and bow hunting season had just begun. The parking area was full of horse trailers and massive horse and mule trains were sending off clouds of dust up the trail. I turned around and fled!

Massive? Like 5-10 mules/horses? The Western side of the Wallowas is popular for hunting in the Fall. The Western side doesn't get a lot of usage with hikers so be thankful the horses keep the trails visible. And BTW most bow hunters aren't horse packing. The bow hunters I've ran into are stealthy and packing on foot.
It's September and most trails are dusty throughout. You really should try visiting the Western side in July .
Last edited by backcracker on July 17th, 2019, 4:35 pm, edited 1 time in total.
Top

Several parties with several heads of stock each. A number of large horse trailers in the parking lot, some groups already on the trail, but a lot of horses/mules still with the vehicles. Just a bit of a shock compared what I've usually experienced (and I've been to the Eagle Cap several times in September). It was the biggest gathering of bow hunters I've ever seen!
Top
Post Reply
7 posts • Page 1 of 1