We had an evening start to our hike and camped overnight on the east climbers trail just outside the Timberline ski boundary, but this hike would be better done as a day hike with less gear to cart around.
The hike from Timberline Lodge to Devils Kitchen and back was pretty steep in sections, but the early morning snow was firm and we stuck to it with our micro-spikes. We chose to glasade back down to the bottom of Palmer and had a blast, though a large garbage bag cut into diapers would have helped quite a bit with the glasading, but we made due with our snow pants. If done as a day hike you could go a bit longer maybe to the base of hogback, but we were quite content to make it to 10,157 ft in elevation.

We had light past when we made camp.

I always love seeing the lights from towns on the east side of the Cascades.

The climber's headlamps can be seen on Mt Hood around 3am.

The whole night put into one picture.

We got an early start in the morning allowing us enough time to make the full hike.

More climbers making their way up in the early morning hours. 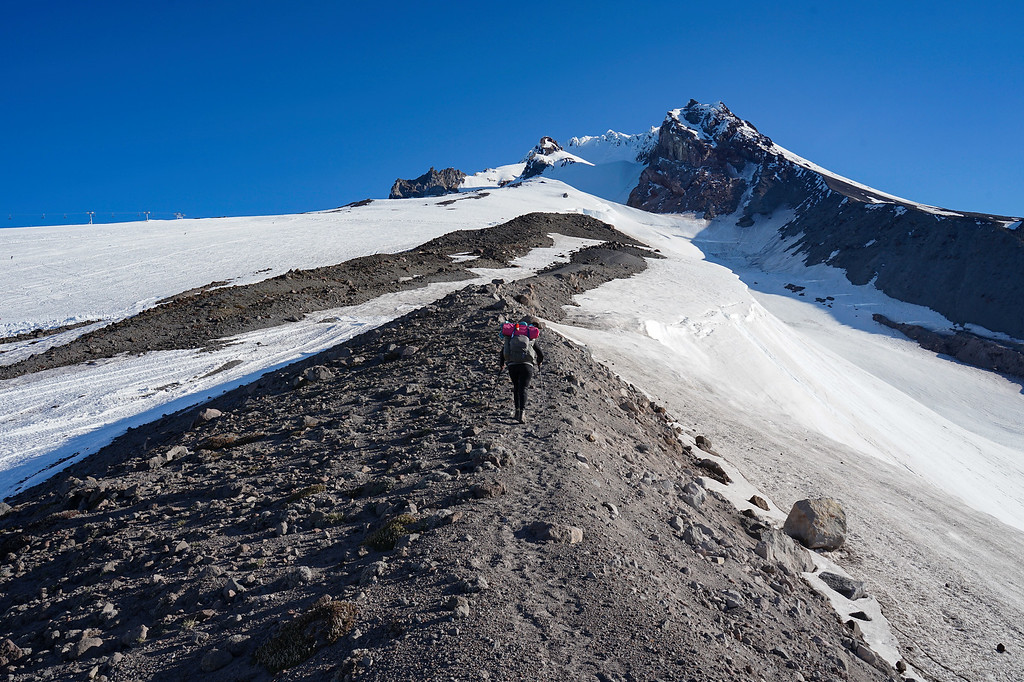 I chose to stick to the dirt trail to near the top of Palmer, though the snow might have been easier with all the loose sand.

We stayed clear of any edges.

We had blue bird conditions on this day.

Our goals kept expanding as we got further up and were still feeling pretty good. I first wanted to make to illumination rock, the to the base of crater rock and then to get above 10,000 ft, which put us at the door of Devils Kitchen.

The climb got pretty steep, but we stuck to the snow with our micro-spikes. If we would gone much further than Devils Kitchen, I would have wanted crampons.

Trying to stay covered up in the bright sunlight.

That last portion right before Devils Kitchen seemed to be the steepest, though below it it didn't seem that steep.

Finally made our final destination. 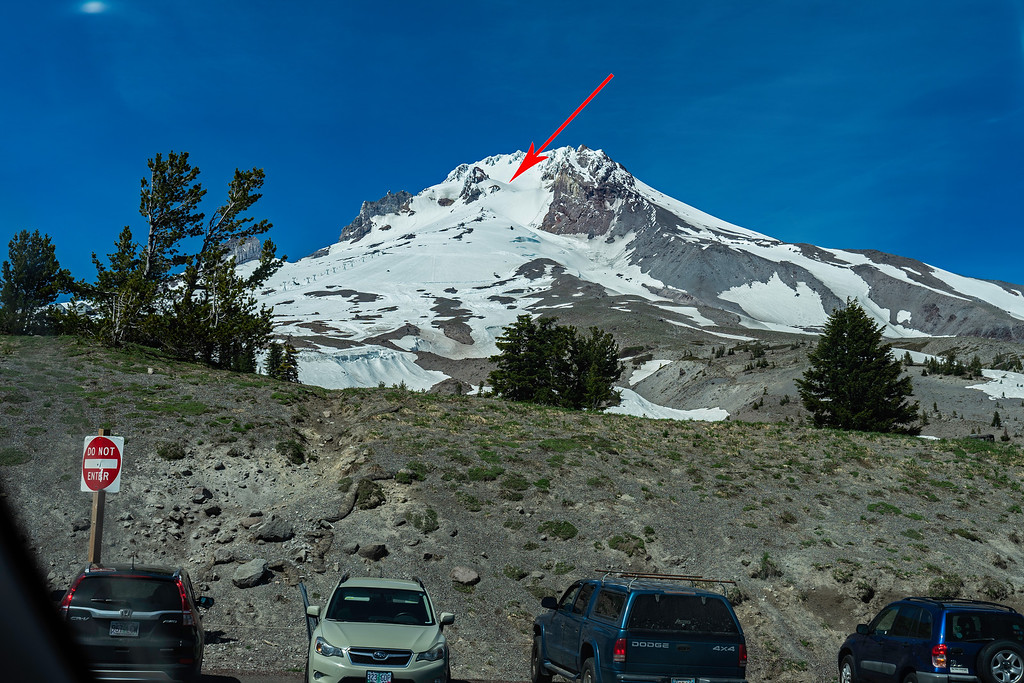 We were pretty proud of ourselves looking back up from the parking lot.
Last edited by rainrunner on June 4th, 2019, 9:31 am, edited 4 times in total.
The mountains are calling and I must go.
John Muir
Top

Thanks for posting the report and sharing all those superb images! It's obvious you have a depth of experience with outdoor photography. Those are some of the best Hood images I've seen in quite awhile. That was an epic trip and certainly required very good fitness and skillset to complete. It made my heart rate increase just seeing the images of those steep pitches. Glad you had the blue-bird weather to compliment everything so well, too. Bravo to you two, and an excellent accomplishment.
Top

Great pics...but I guess you already know that.

Agreed, this is a one day trip. Those who want to enjoy camping up there should go when it's a hot summer weekend, go a little higher, find a secluded spot with no visibility to/from the industrial rapeland of the U$F$ sanctioned development.

Your high point, just below DK, is a bit risky later in the season, with a combination of steam-carved tunnels and possibly crevasses. But it's an amazing spot, and those with the right combination of recklessness/experience/equipment can go all the way up to DK, where they might find abandoned boards/beams and various hardware left over from who-knows-what, and maybe even a little tarn and an outlet creek, when conditions are right.

The "other" DK, on the west side of the Hogsback, is pretty cool too, but not quite as scenic.

In spite of making a dozen trips up there through the years, I guess I never noticed they deliberately create a groomed climbers' trail alongside Palmer.
Top

Very nice report. Thanks for sharing.
I keep making protein shakes but they always turn out like margaritas.
Top

Well done, it's a bit of a slog to get up there, especially as you watch people float by on the chairlifts! I'm surprised that Microspikes were fine for the whole thing, though as you note it's not "that" steep until you get onto the Hogsback, and presumably by late morning the snow would be soft enough that you can kick in. It's shocking to see things so melted out after the big snow dump a few months ago, though I guess it is now properly June?! Getting up into the caldera of Hood is great in the winter/early spring - before things melt out - because all of the walls of the crater are plastered in intricate rime feathers - it's quite amazing and otherworldly.

It's always great to get even a little ways above T-Line and find that you're higher than everything else around you and you have an unobstructed view all the way down to Jefferson!

AKA the Hot Rocks?