The forecast called for a few inches of daytime snow, and Defiance is still closed due to the diesel spill... where to get a powder fix? Obviously Larch, which is fantastic when the whole viewing platform gets filled in.

I couldn't recall how much snow was at road level in the Multnomah area, and was not keen to walk through a snow slump on the part of the trail overlooking the drop to Weisendanger (in retrospect, whatever snow would be there is surely tracked to death), so I decided to come in via Wahkeena, which I hadn't been to since before the fire. Pablo has noted a "shortcut" from the Devil's Rest trail going up to Larch, so with snow covering the brush I figured that was a go.

Wahkeena has been tracked to slush. I cut OT up a hill to gain the Devil's Rest trail and found that trail was well broken but didn't seem used so far this weekend - all the goobers down below were doing Wahkeena or Multnomah-Wahkeena. (Sample conversation: "Is this trail the way down?") 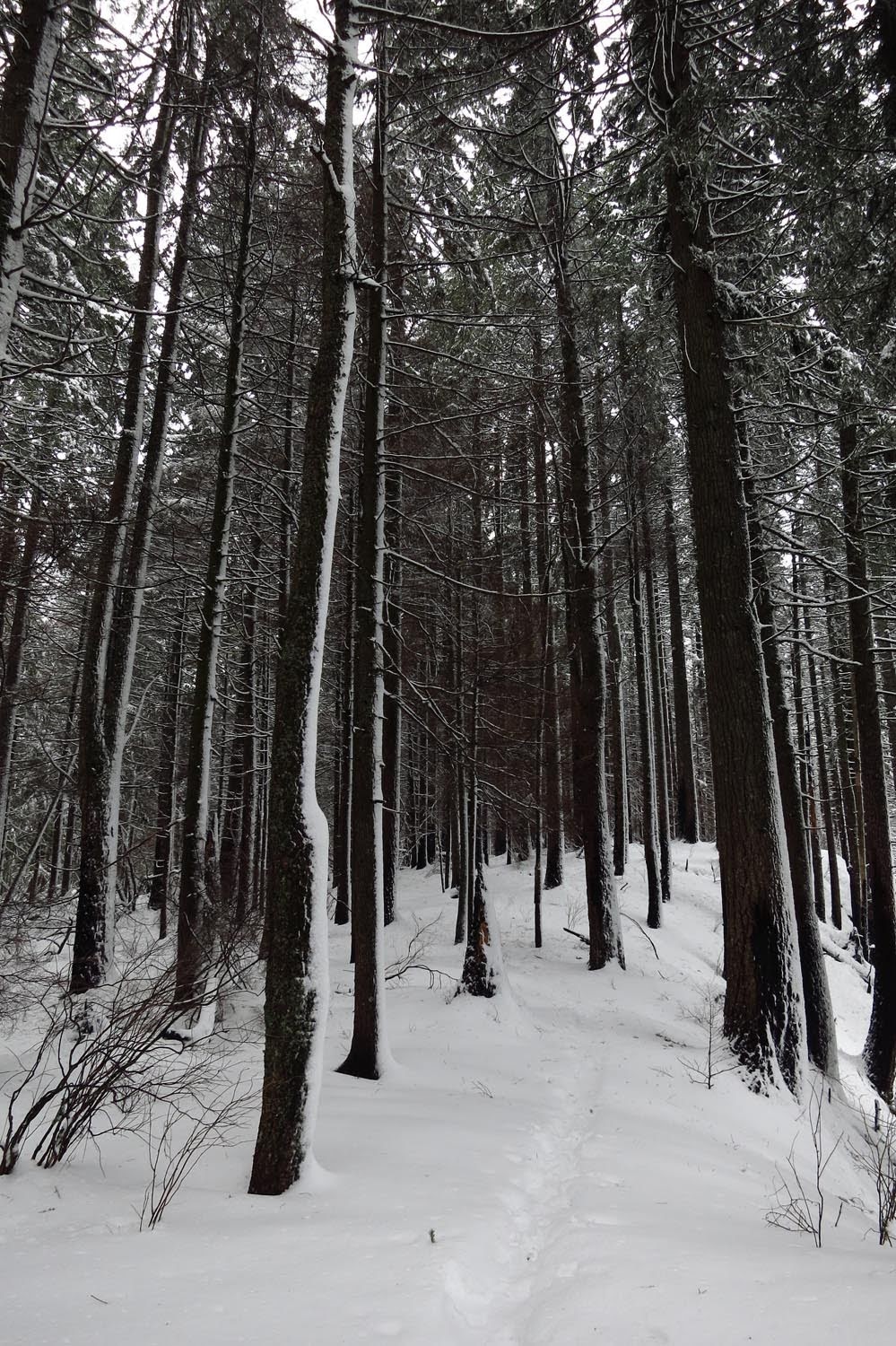 I turned off the trail onto the old roadbed and spotted this awesome snow mushroom. (Though it turned out this had happened on basically every stump, especially up higher.) 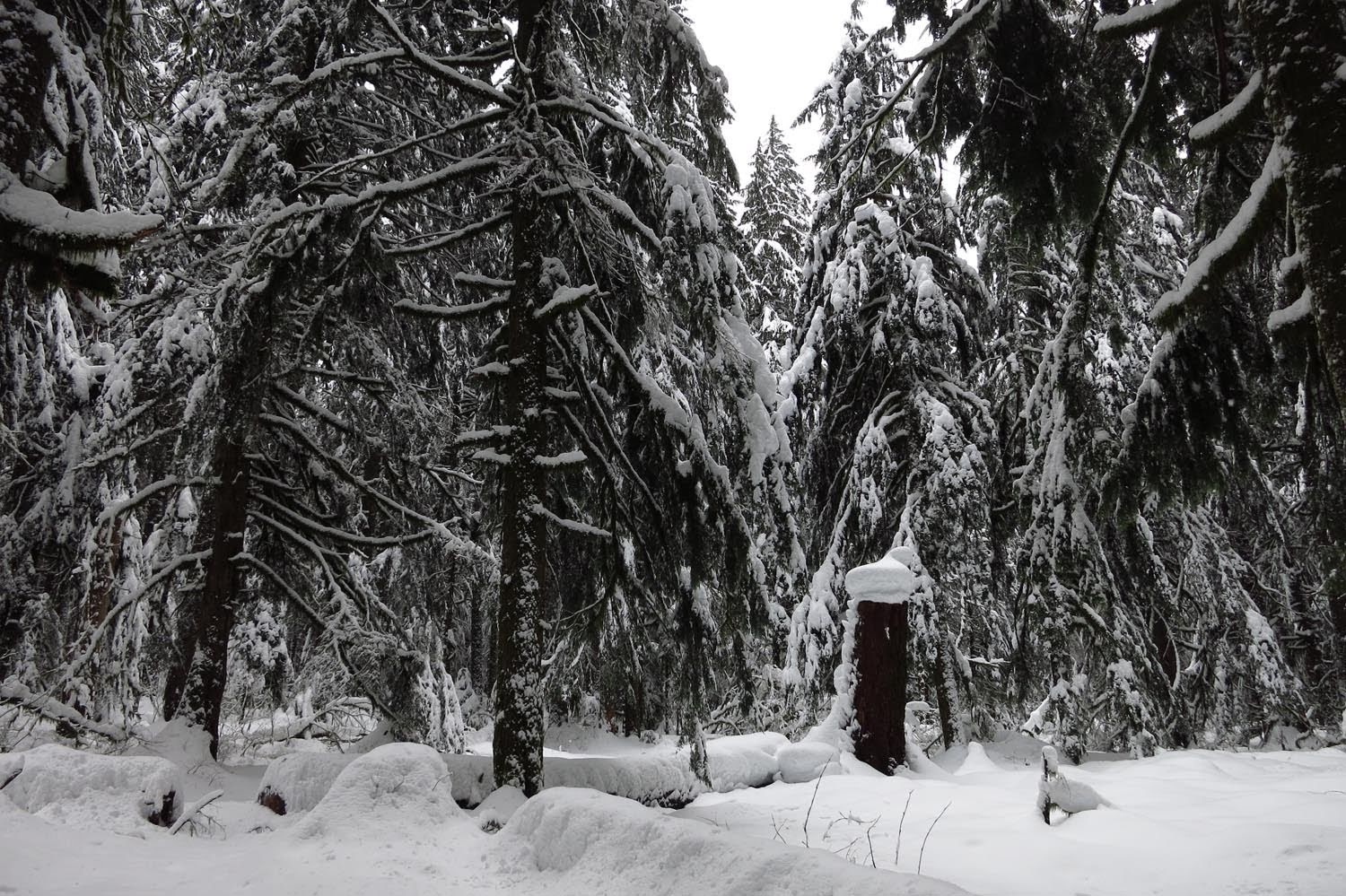 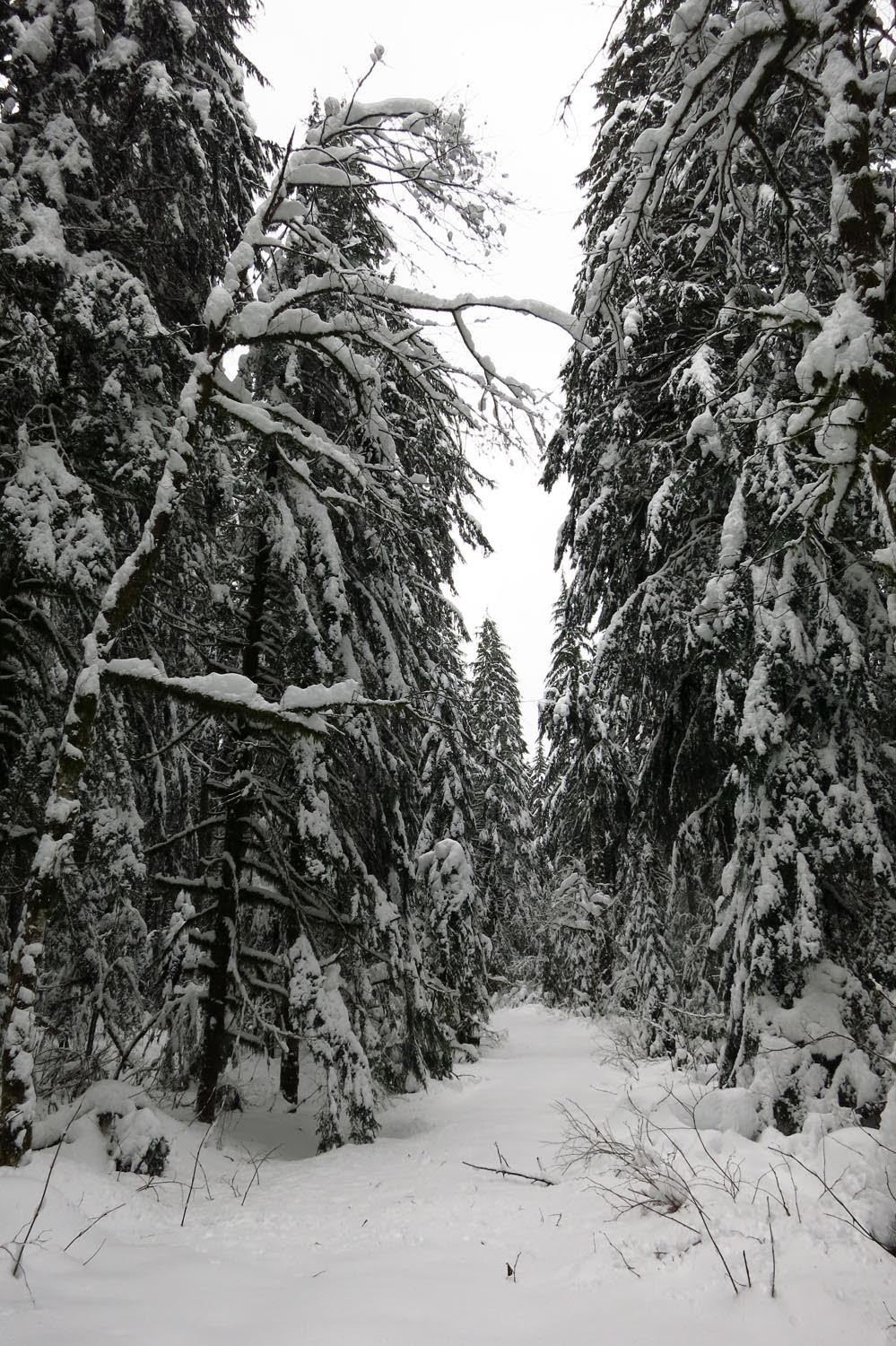 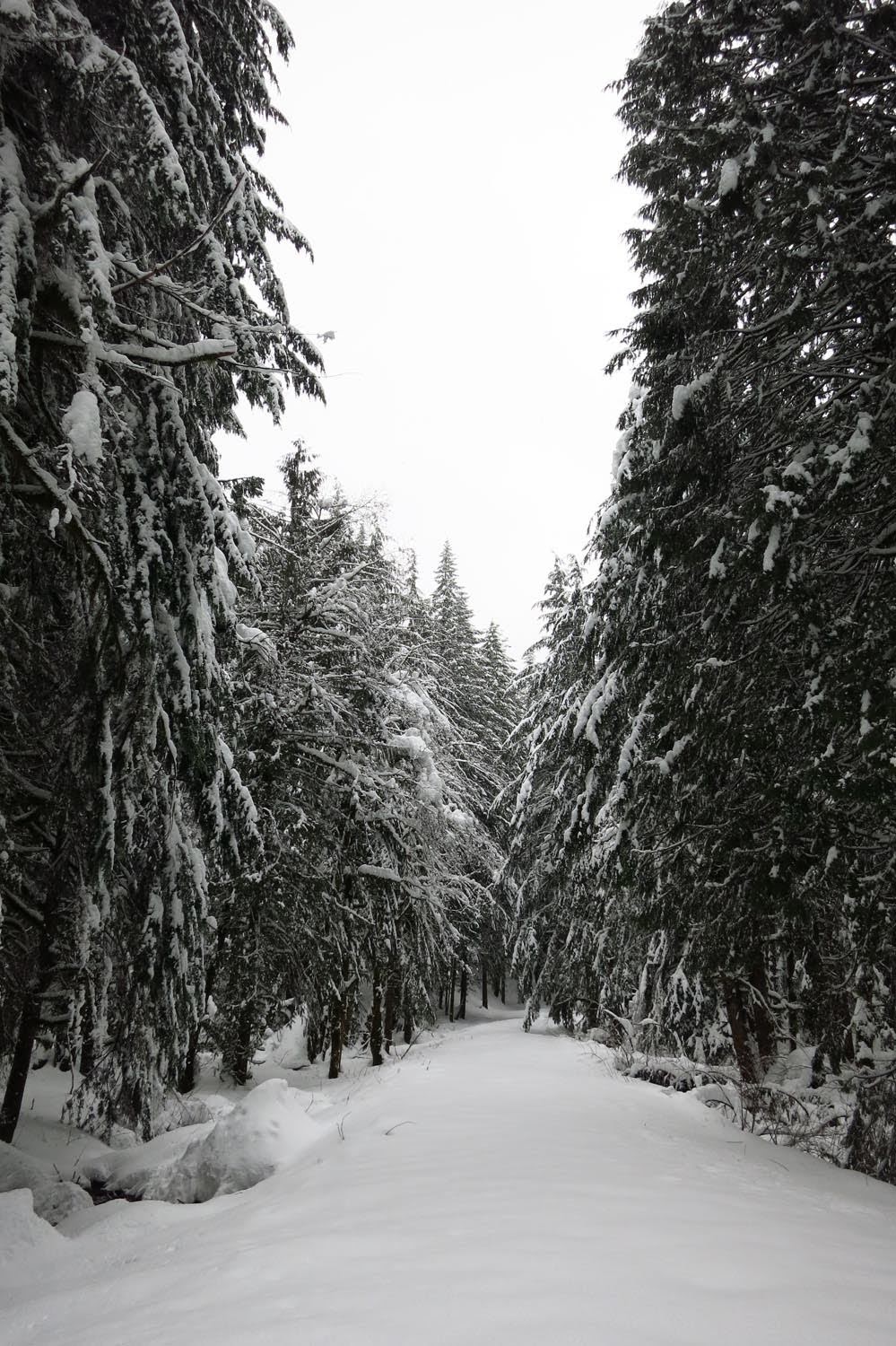 I'd wanted to leave the road and start going cross country, but the trees were fully covered and kept dropping huge amounts of snow, which I didn't feel like taking my chances under without a helmet! 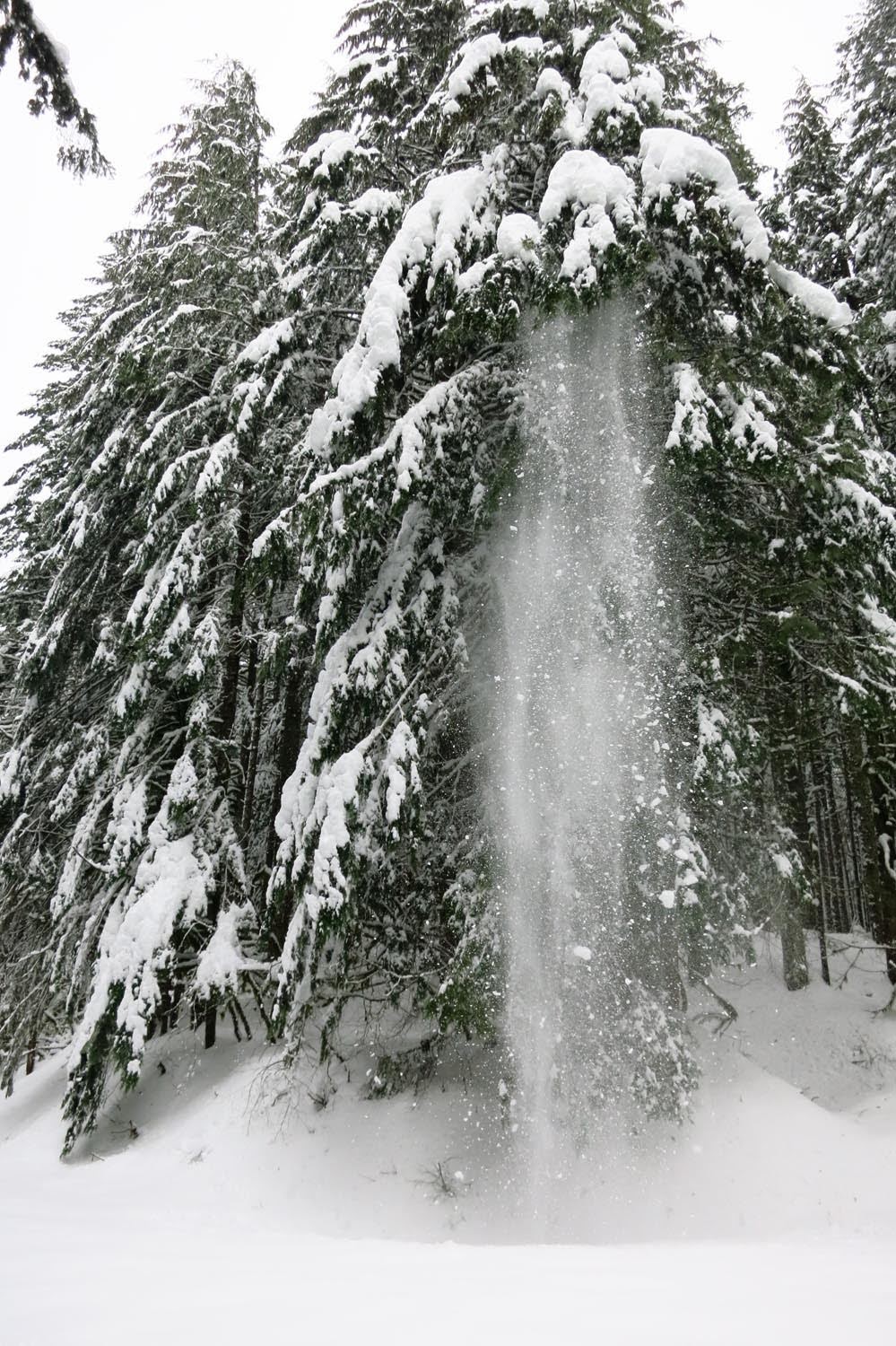 I turned left onto Palmer Mill Rd and after rounding the bend ran into a couple of ladies who had driven within about 3 mi of the Larch snow gate and had snowshoed up to the gate and then down Palmer Mill. It was lovely to have a nice broken track for once! However, I'd already gone farther on Palmer Mill than I'd planned (see above about snow bombs) and really needed to take a direct route uphill to Larch Mtn Rd. So after passing this snowy culvert 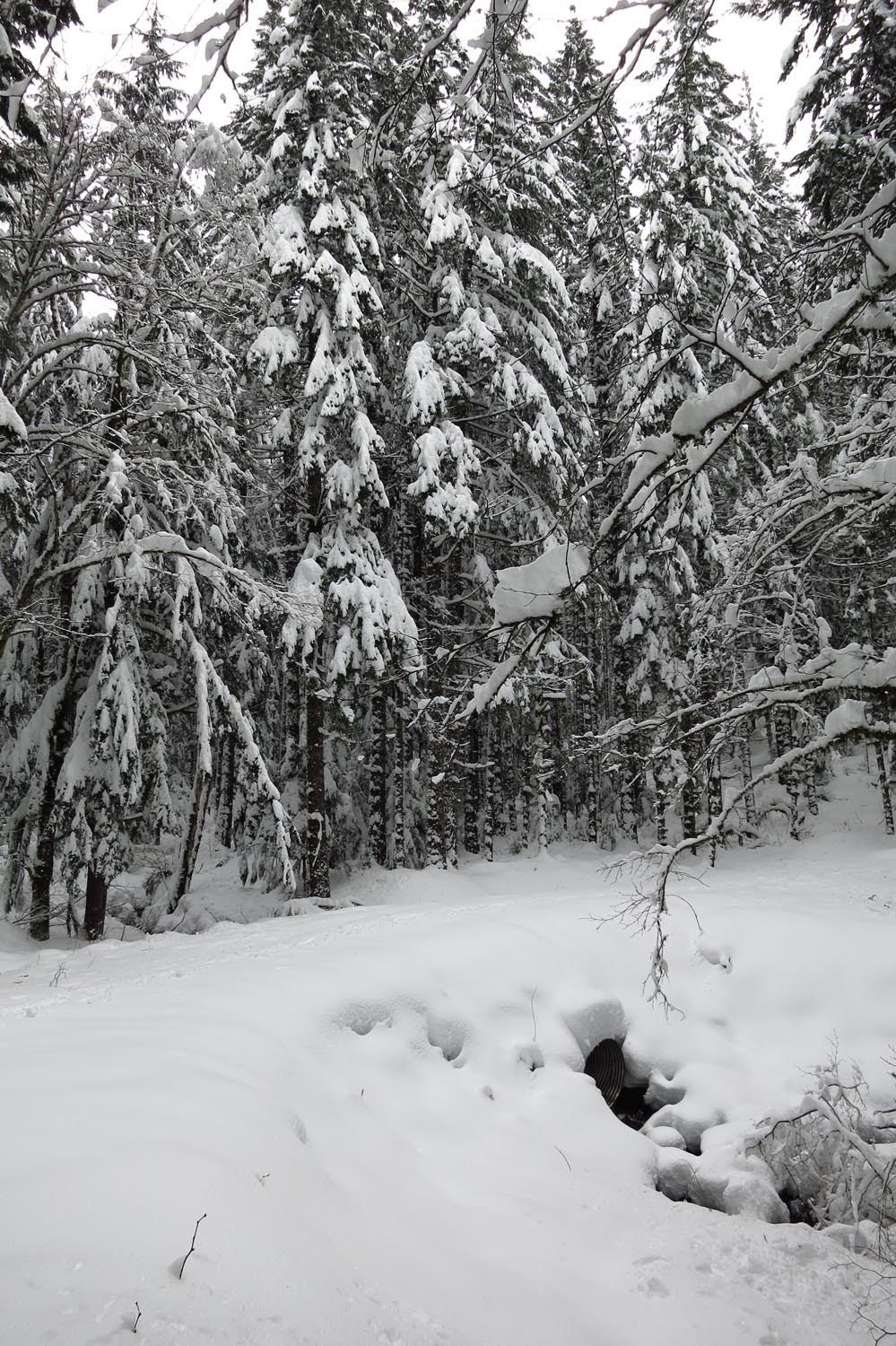 I turned and broke trail uphill into the forest. 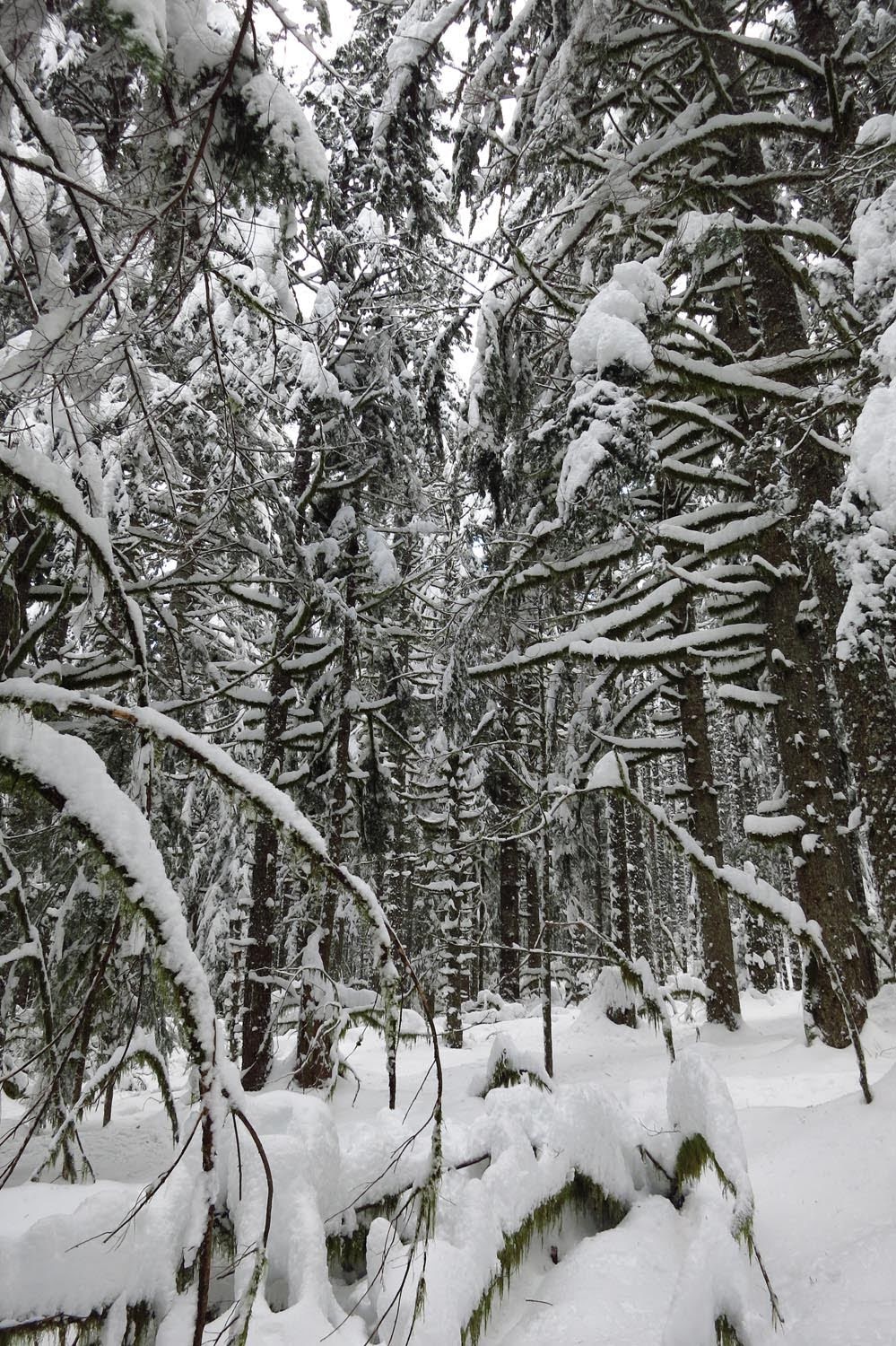 It took a lot of time and effort to break trail through the 500 ft of EG to reach Larch Mtn Rd. There appeared to be snowmobile tracks going up the road from the gate below. (It had also started snowing in earnest.) 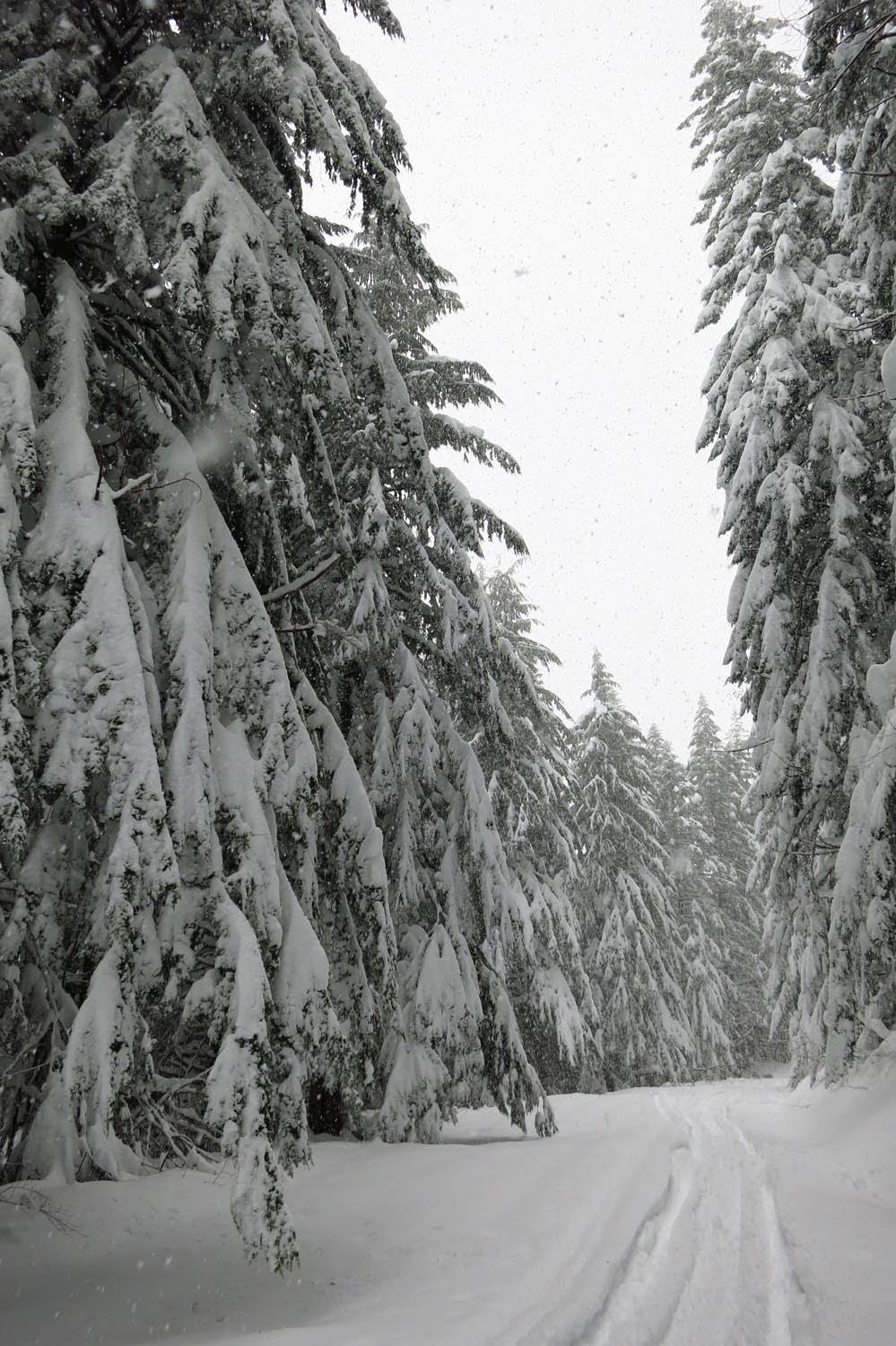 But after a bit the snowmobile apparently turned around. And the snow was so deep - normal walking was up to the shins wearing snowshoes, through drifts it was up to the knee - that I opted not to follow the road ("the long way") and instead turn and cut straight uphill to catch Larch Mtn Rd around the bend. But, of course, breaking trail in deep snow uphill is exhausting (and very slow). Around 1pm I popped out on the road, a little past MP 12. 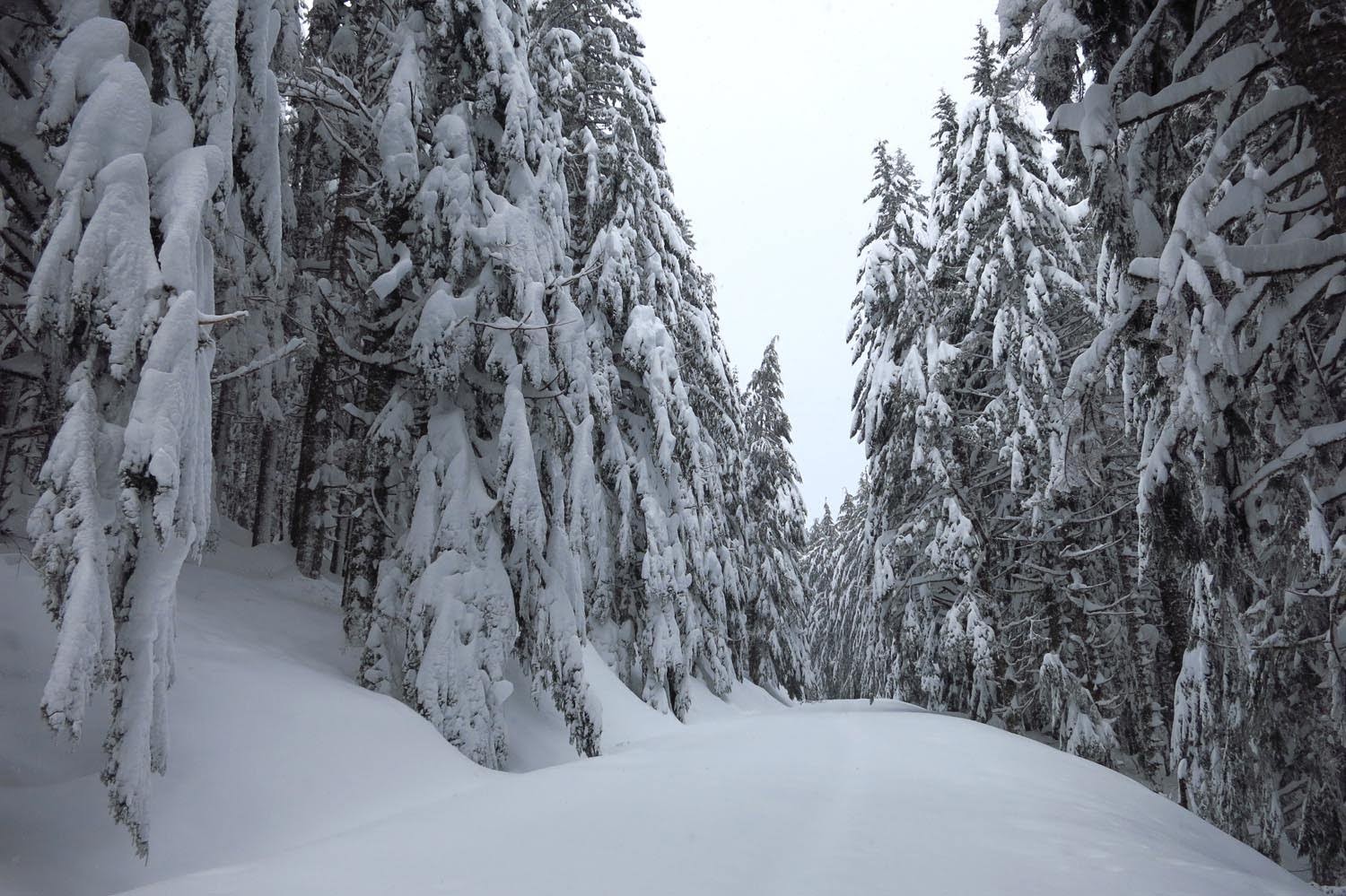 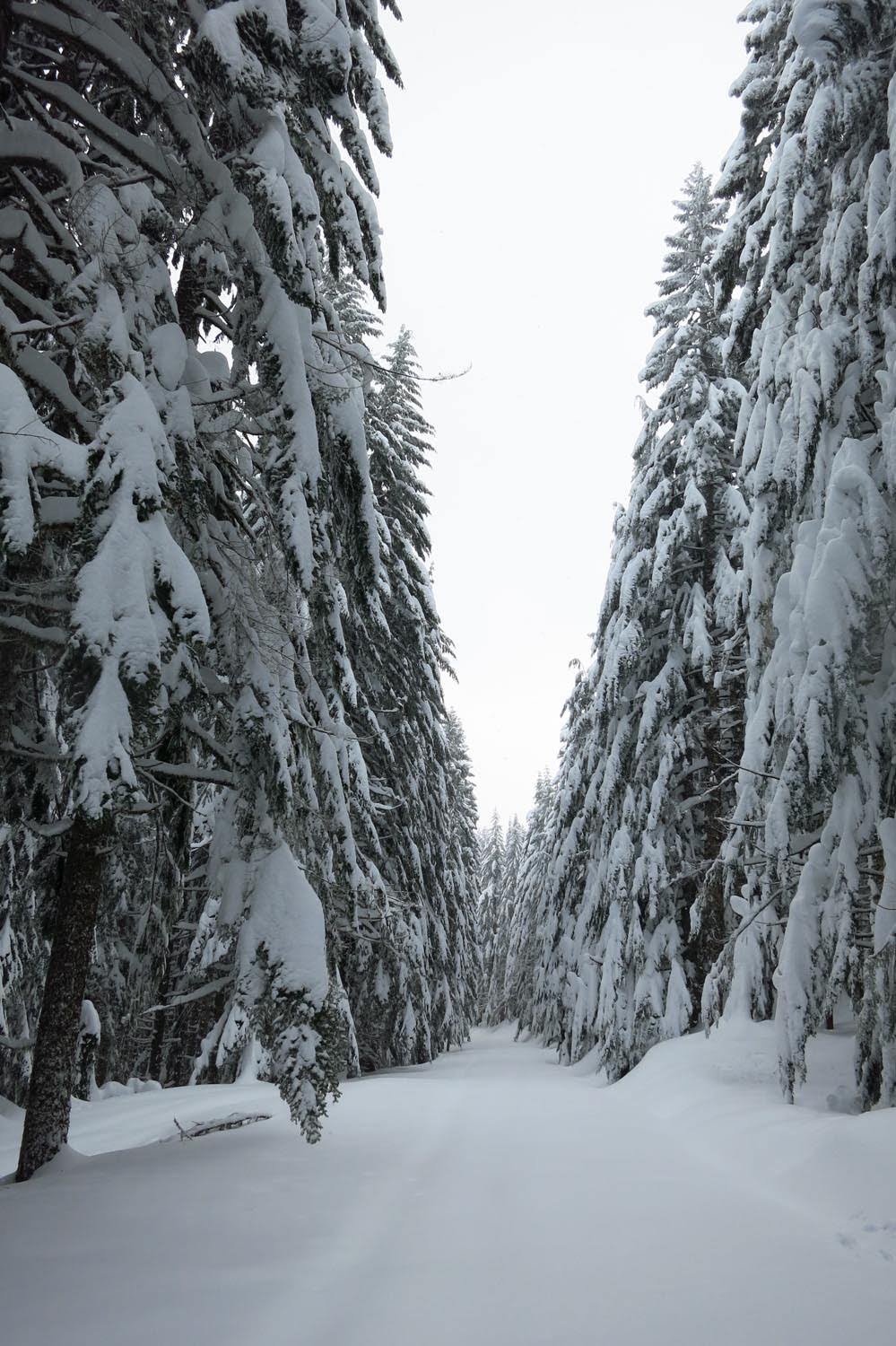 There was probably 3-4 ft of powder on the road, and no tracks anywhere. 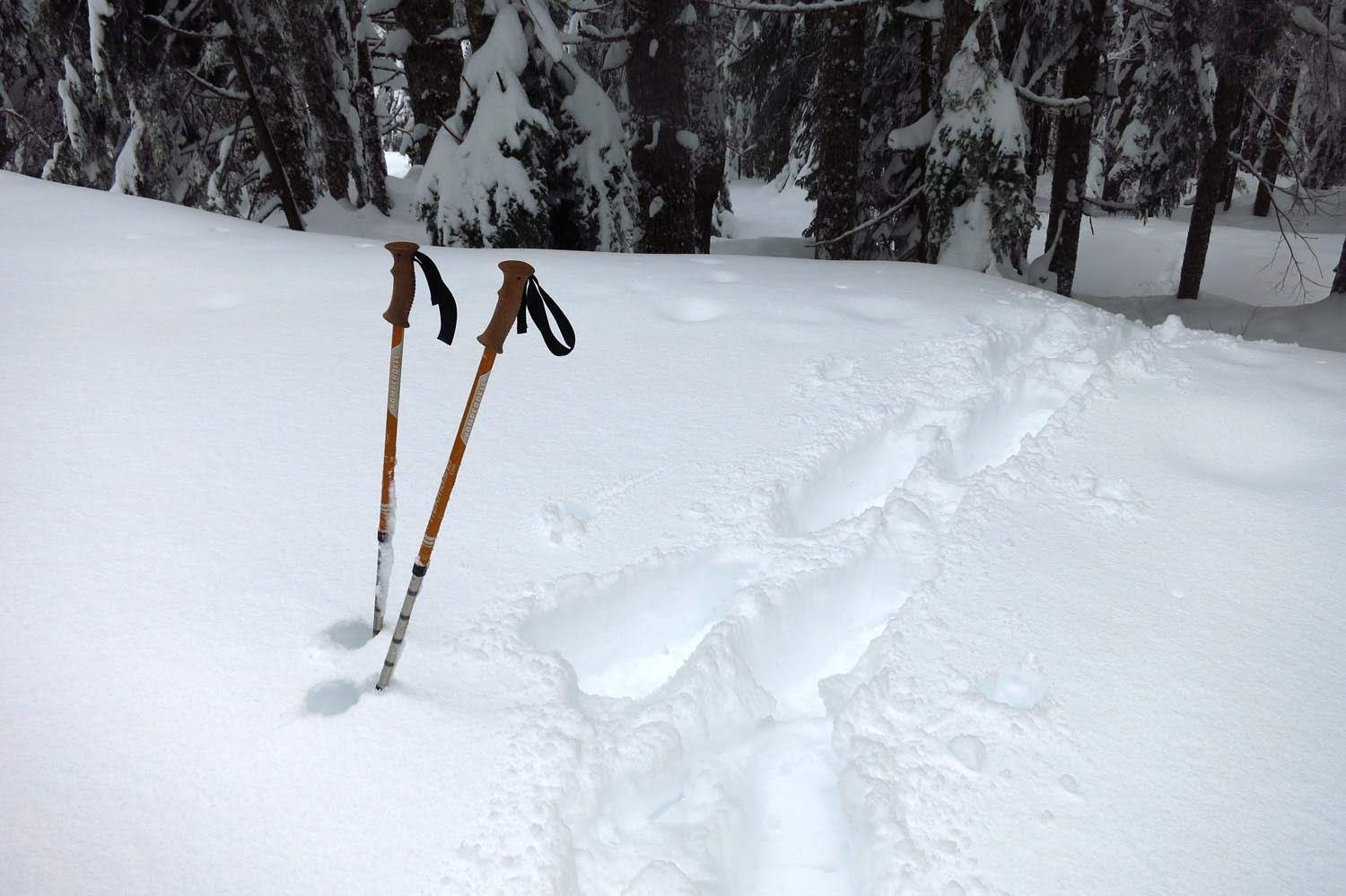 I was still about a mile as the crow flies from the summit. But it was still earlyish, and wasn't really snowing anymore, so I decided to try to keep going and see if I could make it. But after trying to break trail through powder up to almost my knees, I called it after only a hundred feet. I was only at 3200 ft but it would just take way too long to get anywhere near the summit, and I still had 800 ft of EG to go and was very tired. So I turned and headed down the road, which also required exhausting trailbreaking! It also started snowing hard again, so probably for the best. 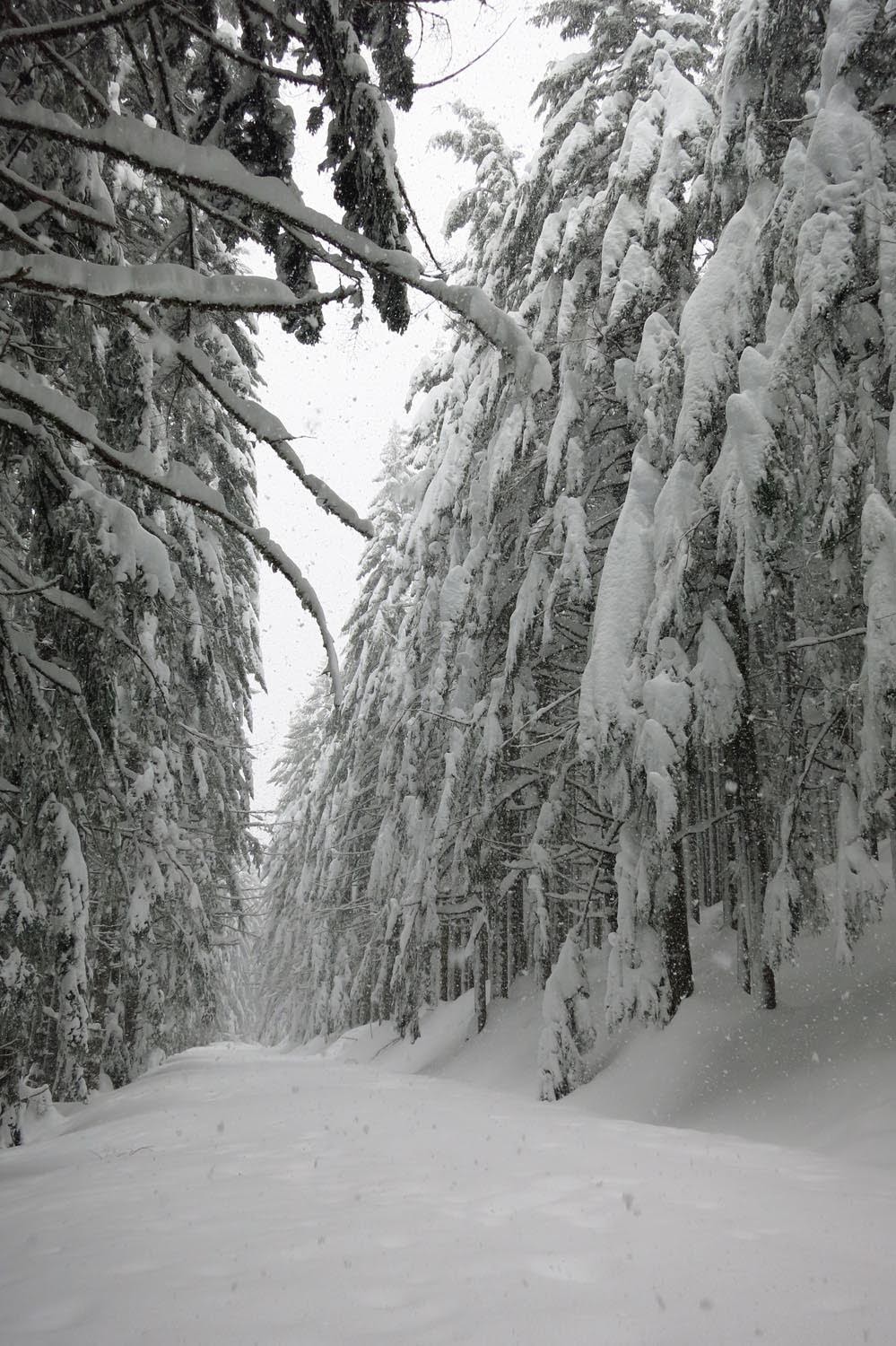 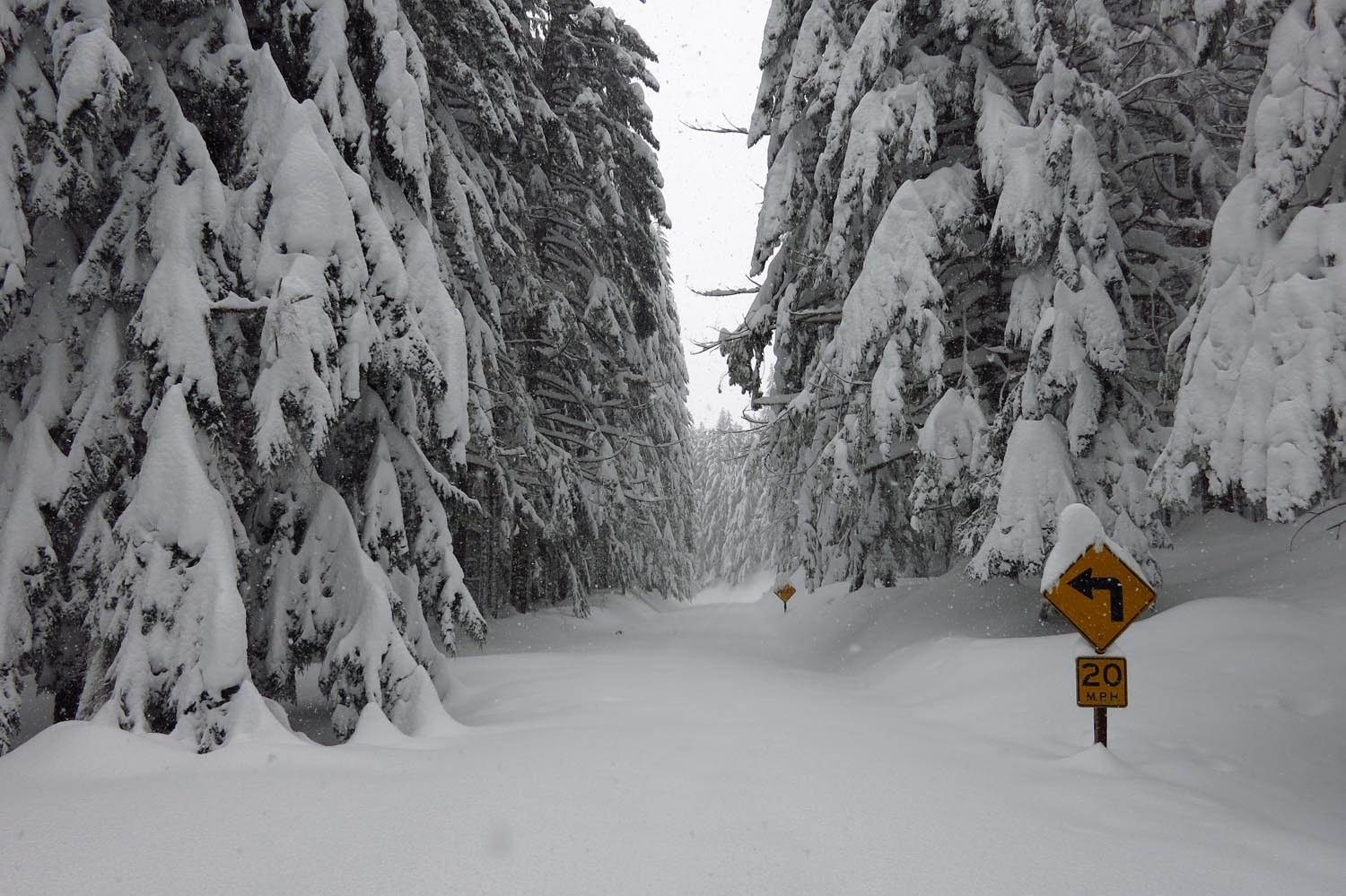 I cut the corner and the snow wasn't as exhausting in the forest where it wasn't as deep. I crossed the road again and headed downhill through the forest. The "ridge"-like undulation in the terrain I was following down spat me out above the ravine that goes down onto Basin Rd, so I headed west through a burn area. Snow bombs were falling from the trees almost constantly in this area; it was like being mortared. 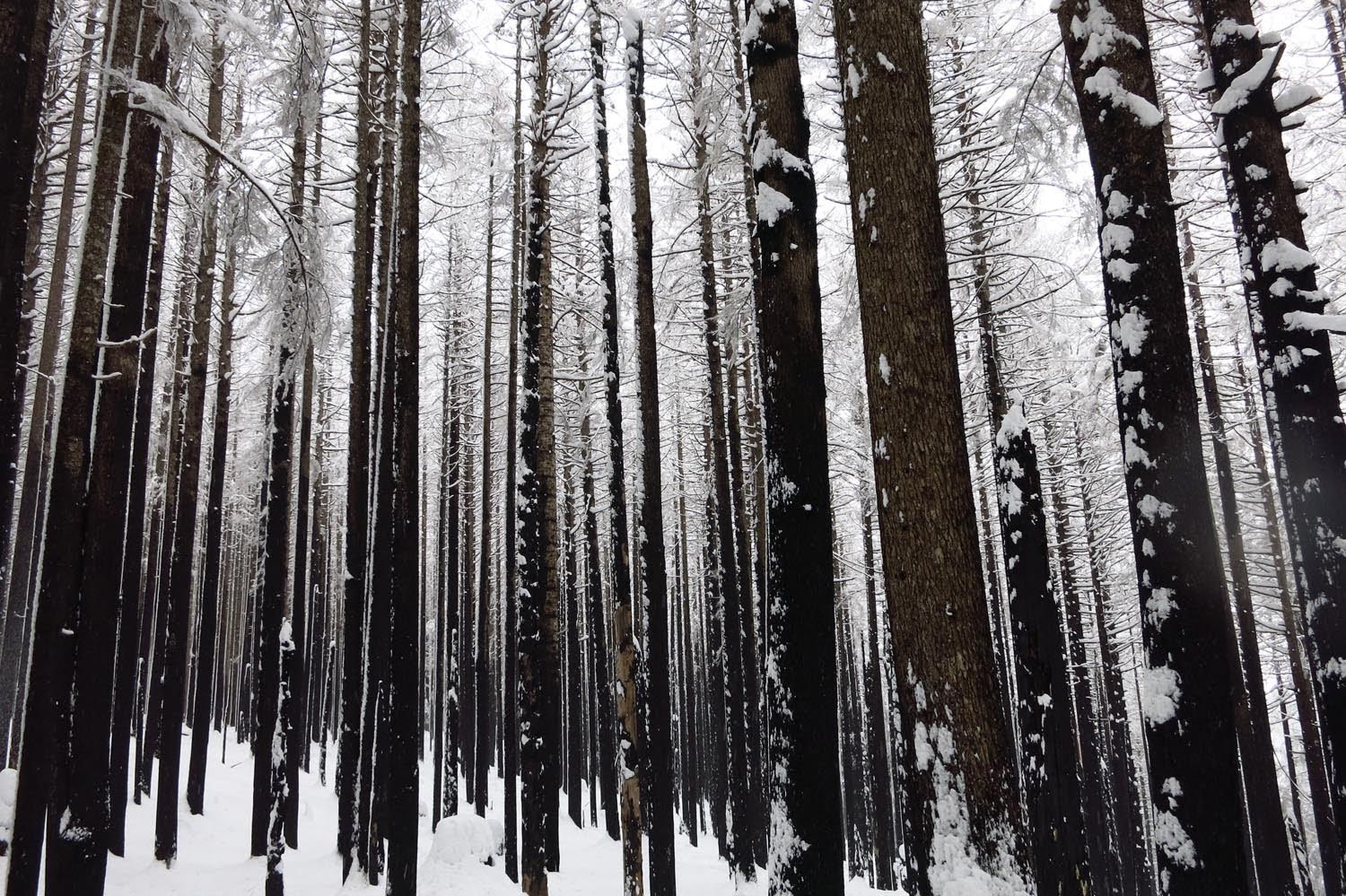 After that I regained the Devil's Rest trail, took it back down to the main trail, and then went back down the slush on Wahkeena. It had started raining at this point, and I was very wet. There were still people scurrying around on Wahkeena, and the parking lot was shockingly full. A bummer not to make it to Sherrard to see the fenced area completely filled in (I haven't seen that since 2012), but great quiet solitude in the deep untouched snow. About 10.1 mi.

What fun! Several years ago I made it to SP in Feb, but sounds like your "failure" was more of an adventure than my success was.

The rain-below-snow-above thing can be great, because you get the security of a safe drive. But having gotten out on Thursday, I opted to do my beer drinking at home today.

I spotted a bunch of fun routes in the general vicinity of Wahkeena, burned out and covered with snow. Maybe I'll cash in another PTO day when it's sunny again (or at least rain free).

edit: Curious about the snow bombs. In my experience, that's a problem after snowfall, when things warm up. Is it common for snow to slough off trees when it's cold and dry? I suppose the weight of snow can exceed the capacity of a bough, but I can't recall seeing that. Maybe I just haven't been out hiking when it was snowing hard enough for that to happen. Anyway, seems like they would be fairly benign, dry and powdery, not like the slush bombs that can fall when it's warmer.
Top

Impressive! I just got my first pair of snowshoes and after a brief trial today, was planning to go up to that area tomorrow. Nice to see there will be no shortage of snow.
TrailCheck (iOS / Android)
Elevation Tracker (iOS / Apple Watch)
Top

Incredible effort, Nat! And a fascinating route, too. Been eyeballing some of those ridges, but that was before this bigass dump up there. Well done!


Bosterson wrote: ↑
February 23rd, 2019, 6:01 pm
was not keen to walk through a snow slump on the part of the trail overlooking the drop to Weisendanger (in retrospect, whatever snow would be there is surely tracked to death),

It was indeed well tracked the day before, but(!) as the day warmed up spikes offered no bite at all through those switchbacks where the perpetual landslide is. Fine going up; damn near slid out coming back down mid-afternoon.


Chip Down wrote: ↑
February 23rd, 2019, 7:53 pm
Curious about the snow bombs. In my experience, that's a problem after snowfall, when things warm up. Is it common for snow to slough off trees when it's cold and dry? I suppose the weight of snow can exceed the capacity of a bough, but I can't recall seeing that. Maybe I just haven't been out hiking when it was snowing hard enough for that to happen. Anyway, seems like they would be fairly benign, dry and powdery, not like the slush bombs that can fall when it's warmer.

We were up there on Friday, and about a mile beyond the boulder field the snow was 2' thick on branches above. At several points, when a wind gust would hit, it sounded like cannon fire as limbs (presumably, perhaps whole trees?) surrendered to gravity in the woods around us. And, the only places where one didn't plunge beyond the knees were in the 3'-5' craters of compacted stuff where bombs had previously fallen. Lots of weight coming down. Not sure a helmet would've made a huge difference in either case; certainly not for the falling limbs. Wouldn't have hesitated wearing one, though!
Karl
Back on the trail, again...
Top

Great job and nice photos too!

I know what you mean about the snow bombs and I've been out and in it three times in the past week and all three times the trees were shedding for different reasons: On Dog Mt. last Sunday the temperature was up to about 35 degrees and a constant rain of drippy snow was shedding off the trees on the lower third of the trail. It was fine higher up. On the Larch Mt. Road on Wednesday, from MP 7.2 to the snow gate) the sun came out and where it was shining on the tops of the trees, (though the air temp was generally below freezing) it was melting enough that the snow was coming loose and falling. Then on Friday, the wind was doing the job on Silver Star.

I didn't see or hear any branches breaking or trees falling but have in the past. I think for that it takes a combination of heavy snow and wind and maybe some freezing rain to add to the fun. It was freezing rain after a ton of wet snow that did all the damage in the gorge in 2012.
Last edited by Don Nelsen on February 24th, 2019, 4:07 pm, edited 1 time in total.
"Everything works in the planning stage".
Top

'snow bombs' / cannon fire is a pretty accurate description. Those limbs get loaded up to capacity, and then when snow above them melts off, or gets blown off it just cascades down to dropping a massive chunk of ice/snow/slush..
Top

Lurch wrote: ↑
February 24th, 2019, 12:55 pm
'snow bombs' / cannon fire is a pretty accurate description. Those limbs get loaded up to capacity, and then when snow above them melts off, or gets blown off it just cascades down to dropping a massive chunk of ice/snow/slush..

Yep, a gust triggers a bit to fall up high, and it just "dominoes" all the way down. The "impact craters" were the only places we didn't posthole.

The snow had an amazing stickiness too, for how light and powdery it was, building up in ways that seemed to defy gravity... 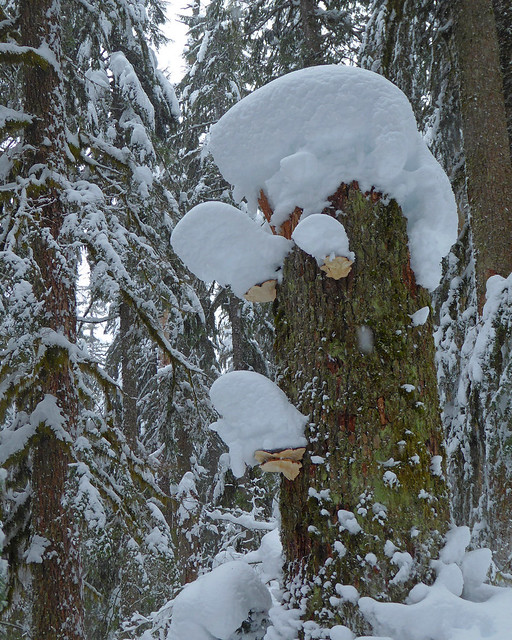