I spent several nights up Deschutes River. Even though the area has largely burned, you can still hike/bike/camp the same as before the fire although aesthetically different than pre fire

All four of those concrete outhouses are unaffected. The first one - you can see it's burned all around it but there are plenty of unburned green places where you could pitch a tent:

There are mile markers for about half the miles. This one (mile 1) was burned but laying on the ground. You can see how it's all burned around it, but green stuff growing back:

Almost all sagebrush plants burned but many are sprouting back:

This looks green but it was all burned, green grass and stuff has grown back. Trees along river seem to be mostly okay but next spring should be interesting to see if they grow new leaves:

I just put my sleeping bag on the ground on a surviving green spot. Burned area all around:

They spread seed on the ground some places, must be a native grass:

The structure next to Harris Homestead totally burned. There are a couple pieces of farm equipment that survived:

Those buildings to the south are totally burned. There was a bunch of stuff inside like barbed wire fence. They must have removed that before or after fire:

The water tower is totally burned. Only surviving is the rock pillar there was a sign on:

They must have gone through and cleaned up all those structures. Removed most of the stuff that didn't burn. Piled up unburned timbers. Actually, that was always a dilapidated ruined area so probably better now. Especially in a few years when stuff grows back.

That area was always pretty barren. Very rocky so few plants grew. You get expansive views though. The fire really didn't change much. I think that area periodically burns, so this is all natural. It'll be interesting to see how things grow back the next few years.
Top

Thanks, Jerry, that's informative. It's kind of sad that the ranch is gone and especially the water tower, but you're right that things will fill in and it'll look nice again. The trees at your camp look almost unchanged from when I camped there in 2012 (February): 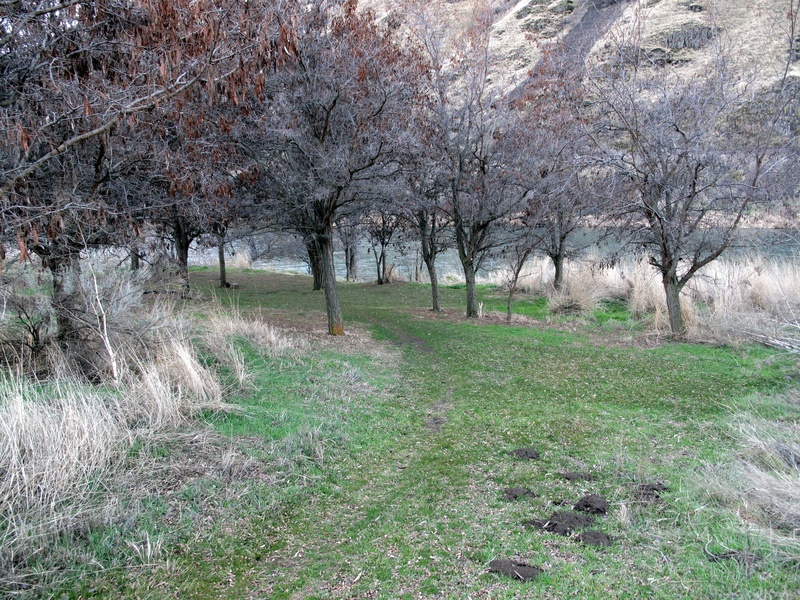 Did any of them survive or are they just dead snags now?
Top

they have seed pods on them, they looked just like your 2012 picture

they must have created those seed pods after the fire

4 months from now we should know

I suspect some trees will put out new leaves, some are dead
Top

Thanks for the report Jerry. Grateful we were able to hike the area a few months before the fire. Love the Deschutes. Based on your report we may be back sooner than I thought we might.
Top

Those buildings to the south are totally burned. There was a bunch of stuff inside like barbed wire fence. They must have removed that before or after fire:

the ponderosas are burned up. I loved those trees.
Top

pine trees not so good in fire

I think a lot of the deciduous trees survived

I can't think of any other pine trees around, I wonder if humans planted those
Top

Any experience on when spring flowers hit this area? I wonder if the ash might nurture some spectacular blooms
Top

Some years past, they would be sprouting now. Area is still under 1’ + of snow, once that gets a good melt down, I’d say it would happen shortly after. (But I’m not perfect, so I could be wrong.) Keep checking road cams to see what the snow pack is like. If you don’t mind snow, go out there on a (hopefully) blue bird day this week because those white rolling hills against the sky is a beautiful sight!
Top

Thanks for sharing your experience. Someday I hope to visit.
I keep making protein shakes but they always turn out like margaritas.
Top
Post Reply
9 posts • Page 1 of 1