Today's goal was Cook Hill via the un-named creek on the SE slope that joins the Little White Salmon River at the fish hatchery. I had no reason to believe this would be a rewarding route, but sometimes that's half the fun, right?

I know Cook Hill is a patchwork of public and private land, so I didn't know if I'd encounter fences or signs. I didn't. At one point, perhaps a couple hours in, I saw a Private Property sign, but I wasn't quite sure where the boundary was. Saw much evidence I was on public land though.

I was pleased that I never really had to bushwhack, and never had to guess much on the route. I started on a crisp clear ridgecrest, sometimes grassy and sometimes forested. It was a little further from the creek than I intended, but it was too enticing to pass up. Eventually hit a slightly brushy spot, but game trails and abandoned roads helped here and there, and I made my way to a maintained utility road which I followed to Augspurger Saddle. There's a utility vault there that never really accumulates much snow, and indeed it was bare today. The weather was awful. Wind-driven snow was accumulating on my clothing, but it was at my back, so it was tolerable. I knew this would be my only opportunity to sit on a dry flat surface for a long time, so I enjoyed my lunch there. Didn't bother going to the top of Cook Hill. I've been there before, in all conditions, so there wasn't much benefit to trudging up there in deep snow.

On the way down I explored roads and ridges, and found a high point which helped me get my bearings. Even so, my route was complicated enough that I don't really know exactly how I got to the saddle. As I got lower the weather improved, until finally I was able to sit on a bare grassy slope and bask in the sun. The precip was intermittent all day, but never troublesome. It was almost all snow, with an occasional rain shower. Back at my car I was shocked when it started snowing some more.

There's still a lot to explore up there, so this might be continued.

Sometimes off-trail exploring really pays off. No bushwhacking to be found here. Drano Lake is at upper left.

Found on an overgrown road.

Heck if I know.

A clearing on a mossy rocky slope gave me my last green view for a while. Slightly above this, it was all snow.

Dammit, this is what I should have been drinking at Little Beacon Rock last weekend!

Re: Cook Hill via creek on SE slopes

Chip Down wrote: There's still a lot to explore up there, so this might be continued.

Returned Saturday 3/31 to check out the beautiful straight grassy ridge that ascends the left side of my creek. Spotted it last weekend and thought it looked like a good route. I could see it would disappear into forest, but I was hoping the ridge would persist, even if the views didn't. Sure enough, less than an hour into my hike the ridgecrest became lightly forested, but maintained a crisp crest with little brush. I hit a high point and dropped into a beautiful broad saddle, and that's where the fun ended.

The ascent from the end of the ridge was up a steep brushy hillside with lots of downed trees. It wasn't terrible, but it wasn't fun. Finally started to level off, and the forest thinned, and I got some views. Then I hit a possible road, a slightly flat bench with less trees than the surroundings. As I followed it, it became clearly a road. I think I hit it around its end, which means if I was on a slightly different route to the west I probably wouldn't have found it. I followed the road up, now snowy, until it crested and dropped. I wondered where this road would end. Wasn't surprised that it turned out to be one of the roads I explored last weekend, and it took me to the maintained utility road that I followed to Augspuger Saddle last week.

In spite of all the lost elevation on that mystery road, I was still pretty high when I hit the main road. Maybe 20 mins to the saddle (bet it was 30 last week, and could be 10 mins if bare). As always, the saddle was windy, so I sought shelter at on of the towers, and even managed to find a dry spot to sit. Poked around here and there on the way down, tried to find a possible descent ridge I scouted last week, missed it, went too far east, realized my mistake but took the next ridge to the east, it brushed out, I gave up, turned back, bushwhacked, found my ridge halfway up, climbed it to figure out how I missed the top of it, then descended again, whew!

Last stretch of my descent ridge was extra-fun: steep, jumbled, rocky. I wished it could go on for hours, but soon I was on an overlook with the road below. My hands were stinging at windy Augspurger Saddle, but down here I was getting almost uncomfortably warm for the first time this year.

I think that's it for Cook Hill. Found more fun up there than I ever expected, but I think I've seen it all now. If I ever go back, it might be to explore the creek, which passes through what appears to be a moderately impressive canyon. Hard to be sure from the road, but it looks promising. Some of the utility roads and old logging roads could be fun to explore on a bad-weather day, but accessing them without steep offtrail travel might involve access issues (private property in the way).

The clearcut pictured in my last TR, considerably less pretty this weekend.

Approaching the saddle. Tire tracks in the snow. I was surprised, and wondered if he was surprised to see my last-weekend footprints. He didn't make it to the saddle; the last 1/8 mile featured a deep drift.

In theory, I should be able to plunge down the utility corridor, take the first road to the right, and ascend it to known territory. Risky though.

I enjoyed a beer as I weighed my options, then decided on the easy/safe return route. Ended up taking a new-to-me road to the lower powerline crossing anyway, which means I could have plunged down that snowy road from the saddle after all.

Amazing I spotted this. A few other parts scattered around, but not much. Like the B26 on Hood, there's just a 5% remnant.

Almost to the bottom.

Looking back up my descent ridge.

Lower stretch of my descent ridge. Ascent ridge is just out of frame to the left. 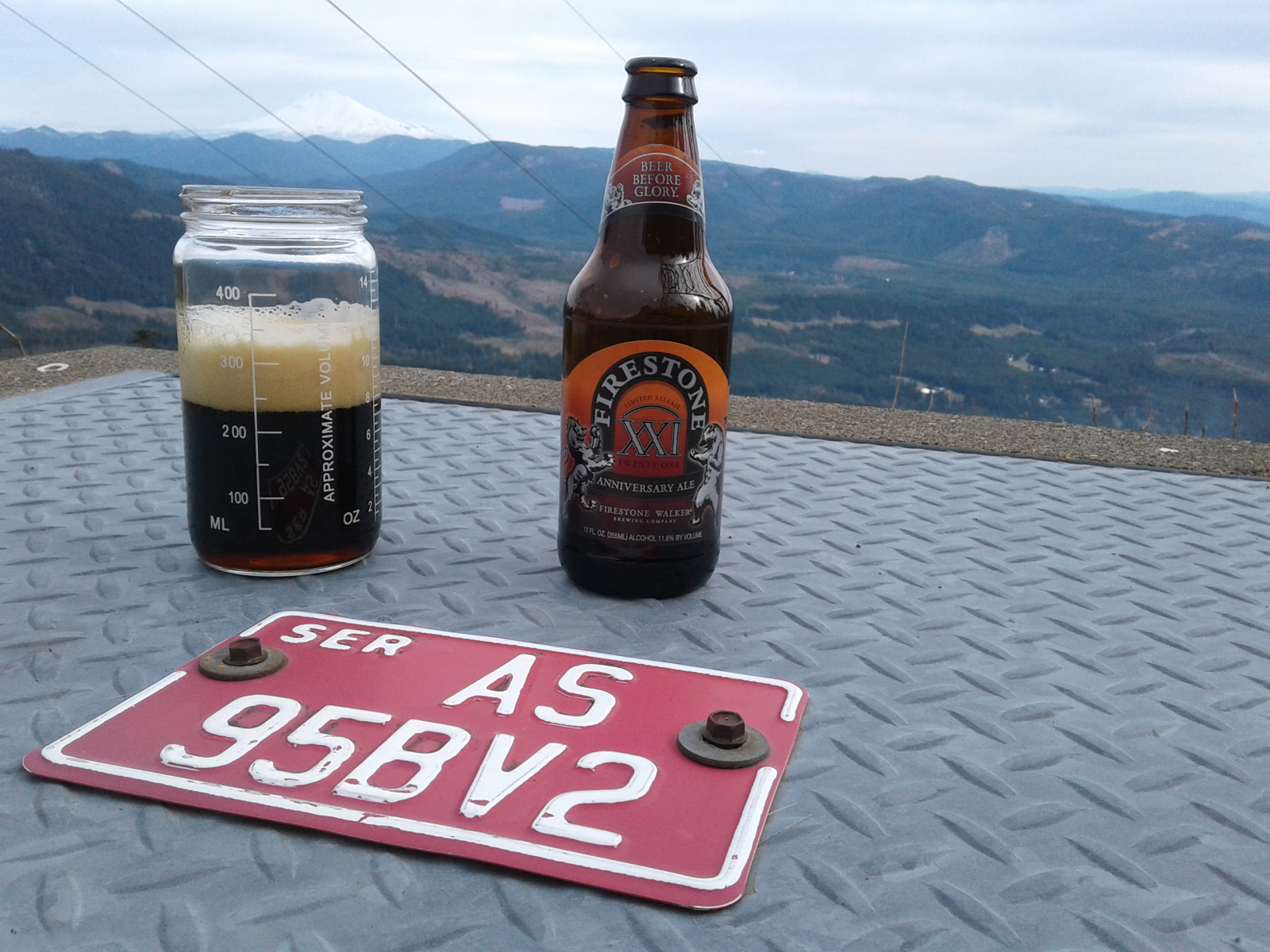 In keeping with the tradition of discussing your beers rather than your hikes, how was XXI? I was disappointed FW downgraded to 12oz bottles for all their specialty stuff last year. I still have my bottle of XX, and am not planning to open either of them for a while.
Will hike off trail for fun.
Top

It was just ok. My fave was 16. Haven't had 20. Never saw it on tap, and balking at paying that much for a mystery bottle. Recently, my only positive FW experience was Sucaba, better than remembered.

Re format changes, I was surprised to find Lil B in a bomber. Found it in a bargain bin for $5
Top
Post Reply
4 posts • Page 1 of 1