With so many reports of huge crowds and epic traffic, in the days coming to the eclipse I wasn't really sure I wanted to travel just for 1-2 minutes of darkness. Glad I went!

Arrived at Gray Butte upper parking area 1:30 am right from Goat Rocks trip (and a short stop home); surprisingly there was still plenty of space to park and to set a tent. I think there were fewer people because it's not near center of totality, but still... Pretty surprising, being only 15 miles from Madras, literally surrounded with tent/bus towns with population probably 10x of the city itself. Another surprise was the normally closed gate to the summit was open - the road is still too rough for my car past the gate but half dozen of larger trucks made it. I just hiked the last ~1400' feet up to the summit. About 50-80 people on the top, pretty tight but not too crowded. Microwave towers didn't really distract from experience, and there was little smoke, mostly down in the valleys and along the Cascades.

Not much to add to what everyone else said - there was noticeable temperature drop the the breeze picked up as the Sun slowly dimmed down. The nice thing was, there's view on all sides (as I wasn't sure looking which way would be better) and the best angle, turned out, was looking west. Incoming shadow was *really* fast - one moment Mt Jefferson turns black, and just a few seconds later it traveled almost 40 miles and was on top of us. Black moon with white corona was really cool. The photos below are not chronologically sorted. 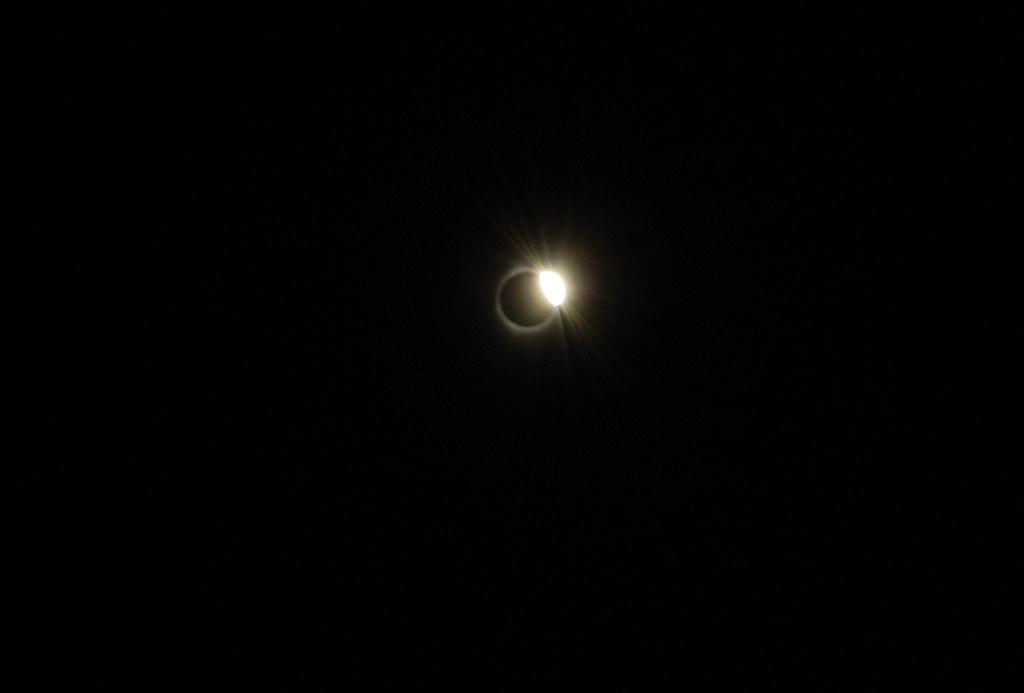 Mt Hood (70 miles away) got just a bit of light, Jefferson and Olallie (38 miles) were black 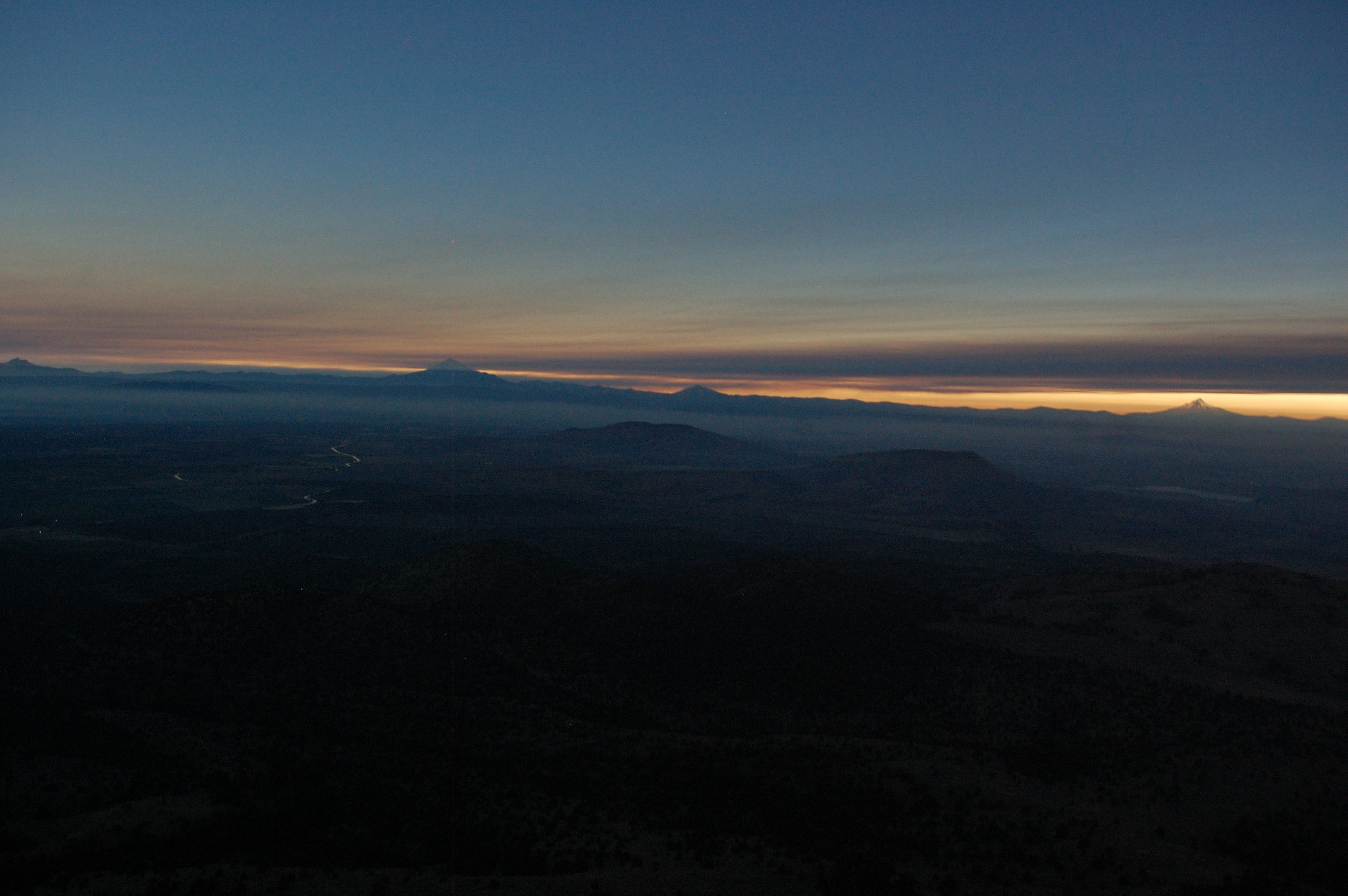 Three Sisters and some fires not far from Mt Washingon (?) 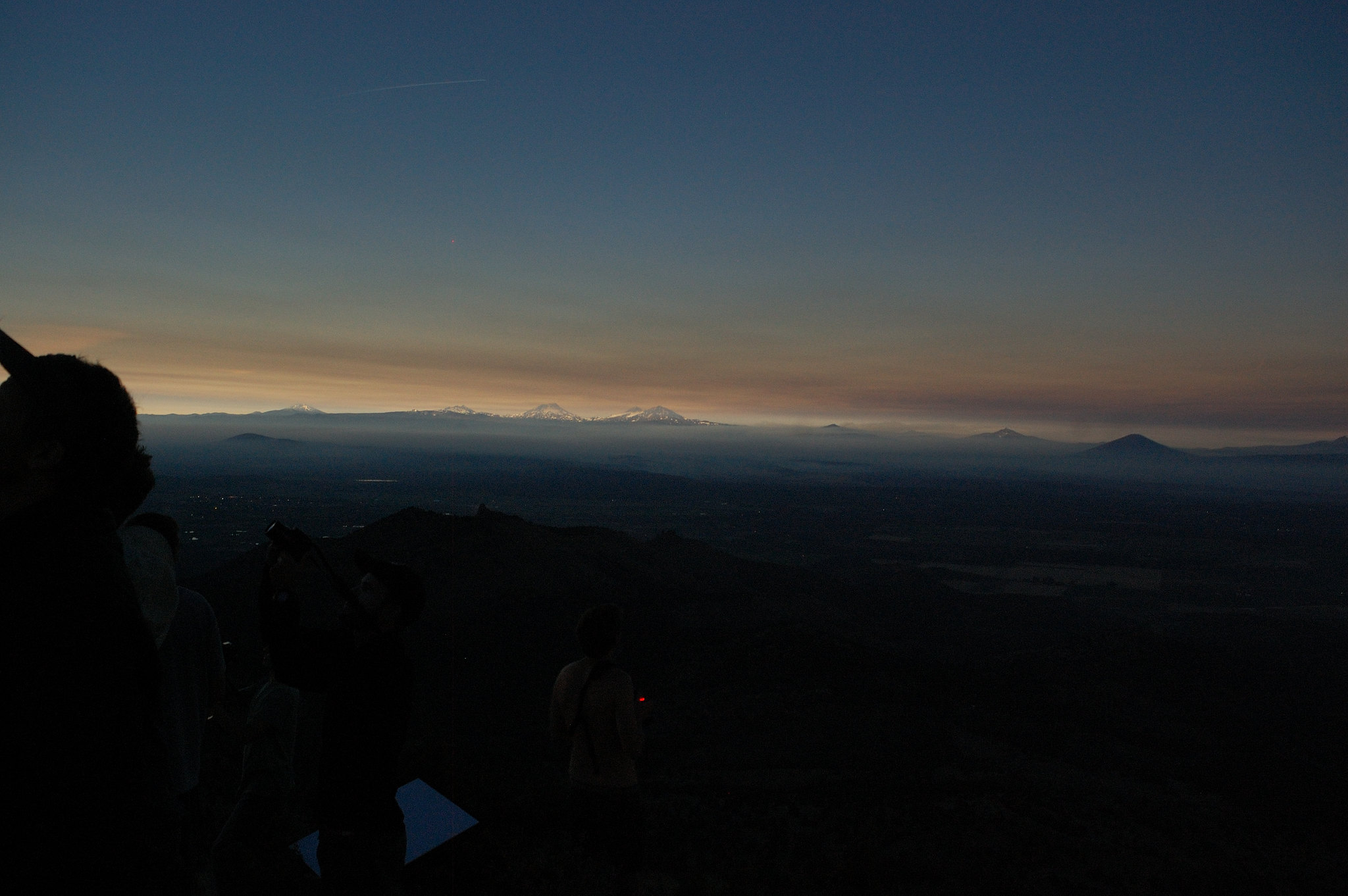 Three Sisters up close. The light was otherworldly! 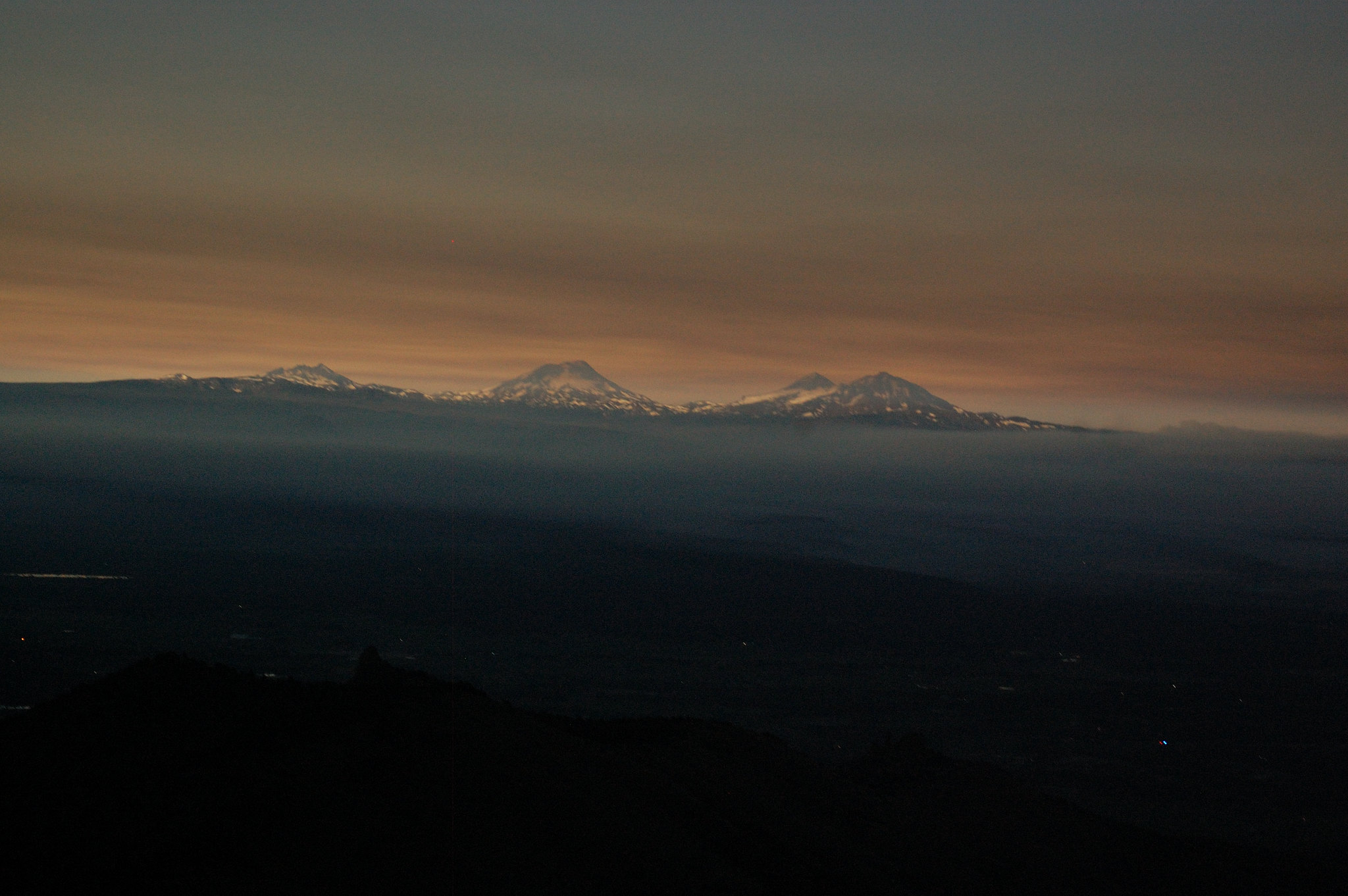 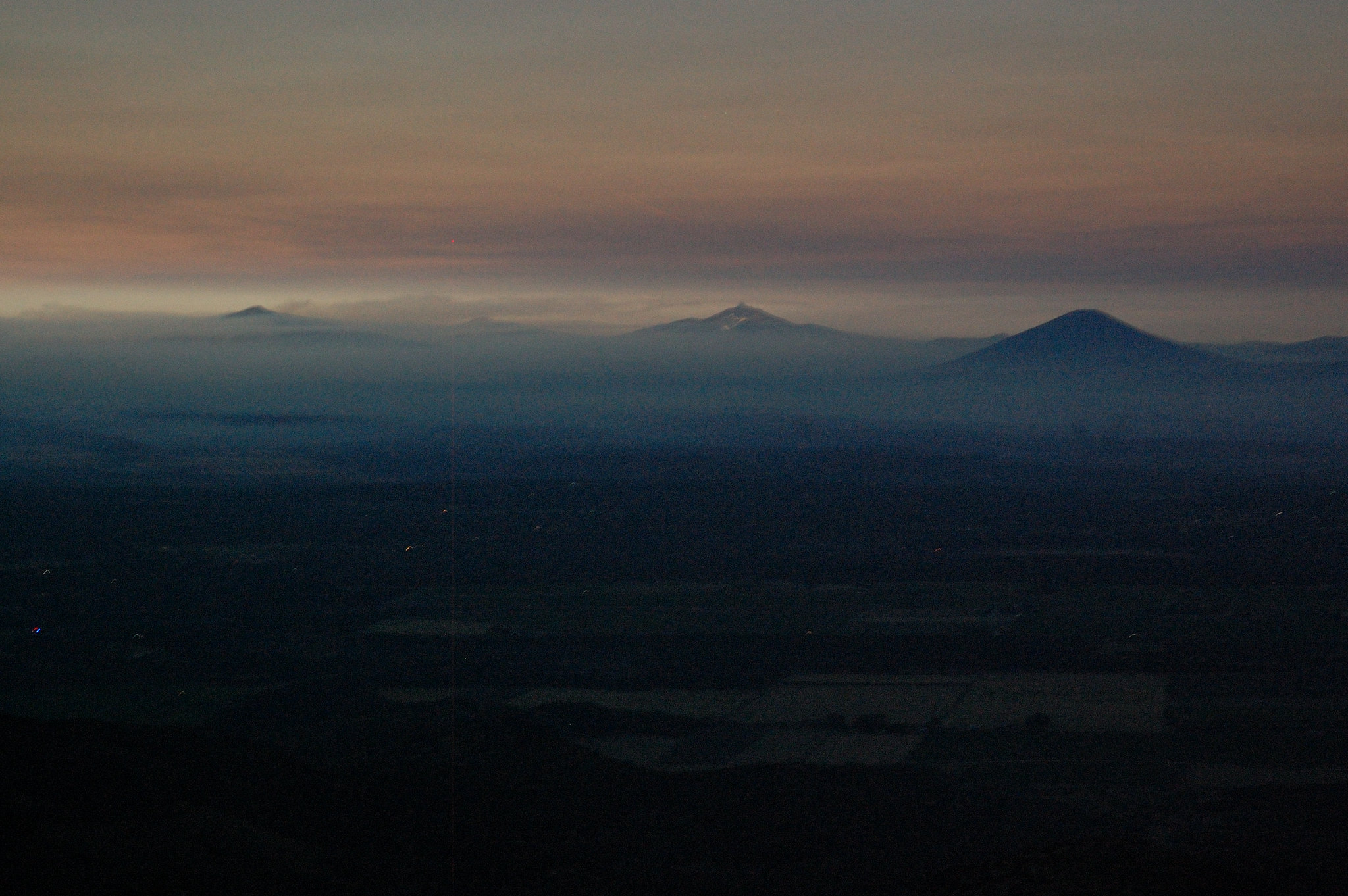 Mt Jeff in the center of this photo (before and after the eclipse, I couldn't see its summit in smoke) 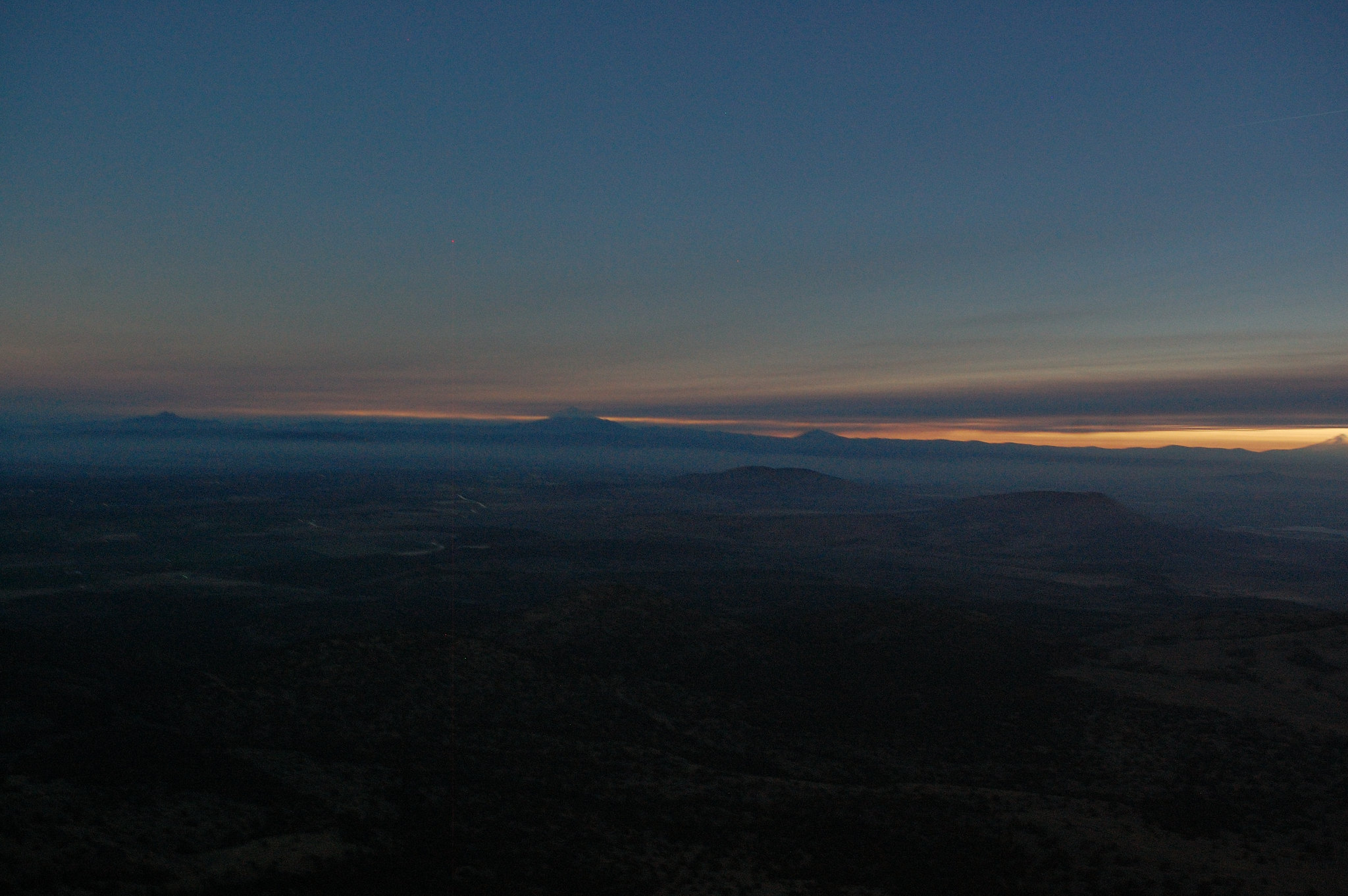 Looking East toward the Sun. With so much happening so quickly, I forgot to answer my own question if one can see the stars during the eclipse? But probably not - while it was relatively dark, it was brighter than full moon night. 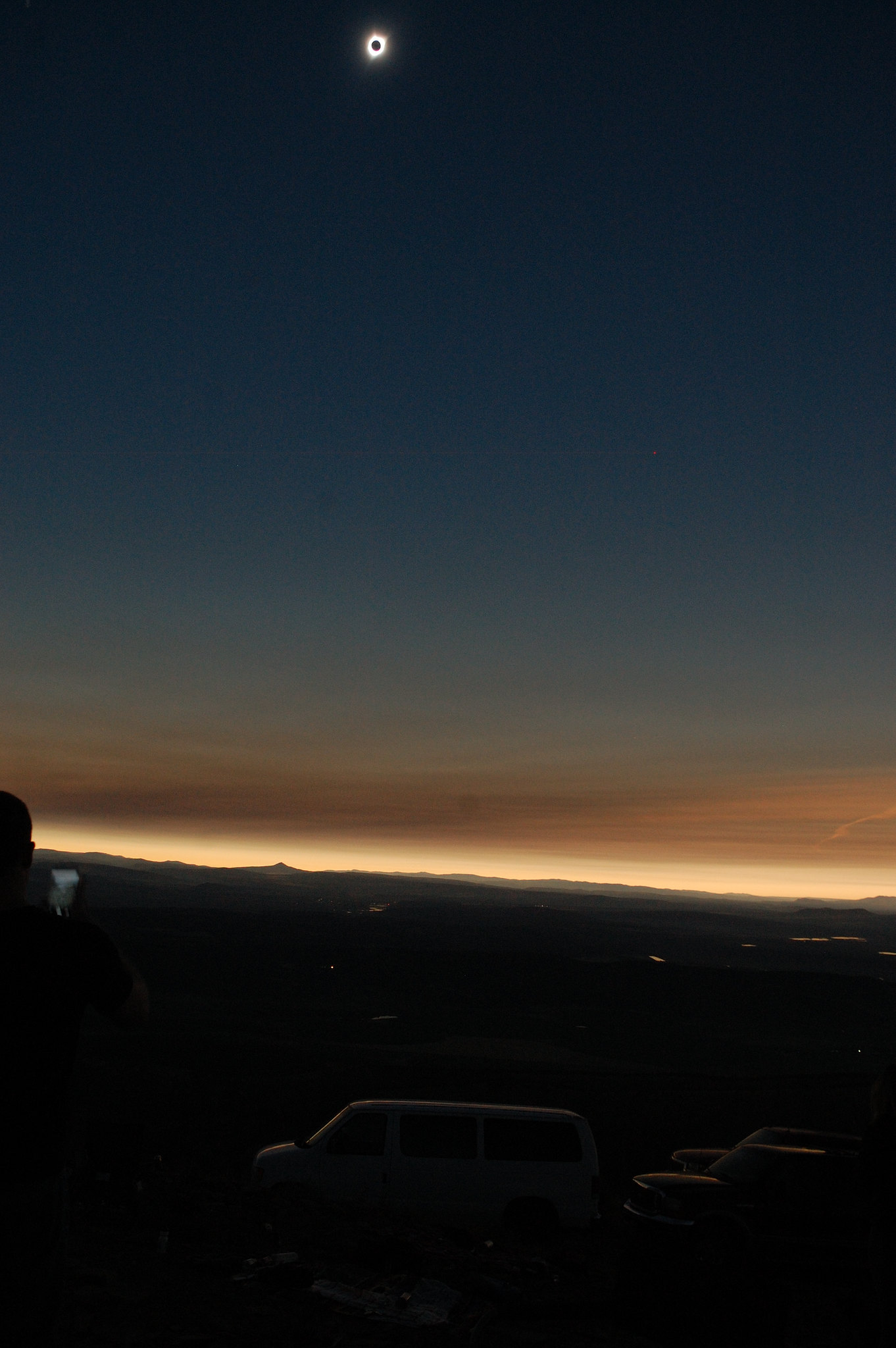 And in little more than a minute, the shadow passed as quickly as it came 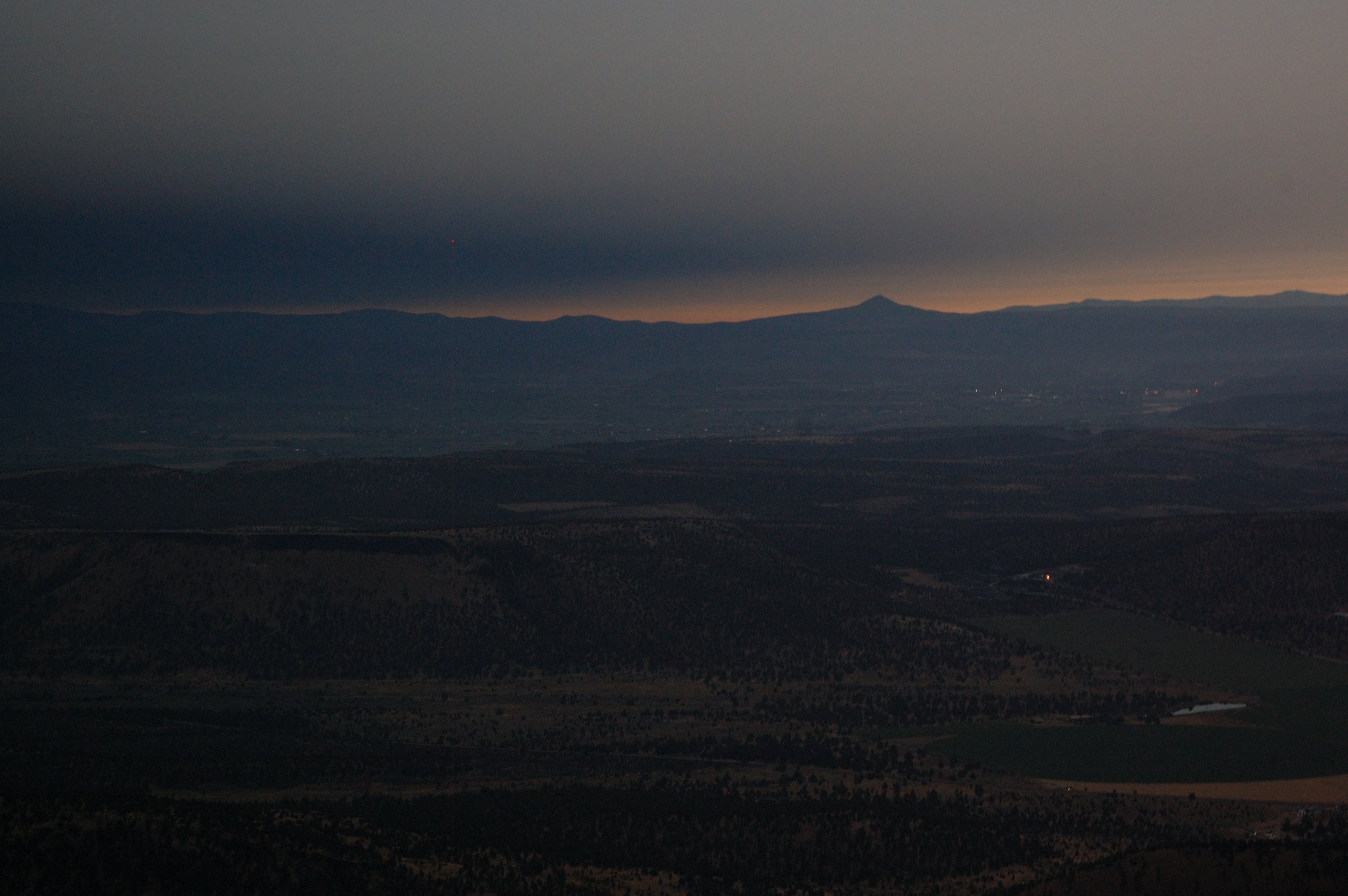 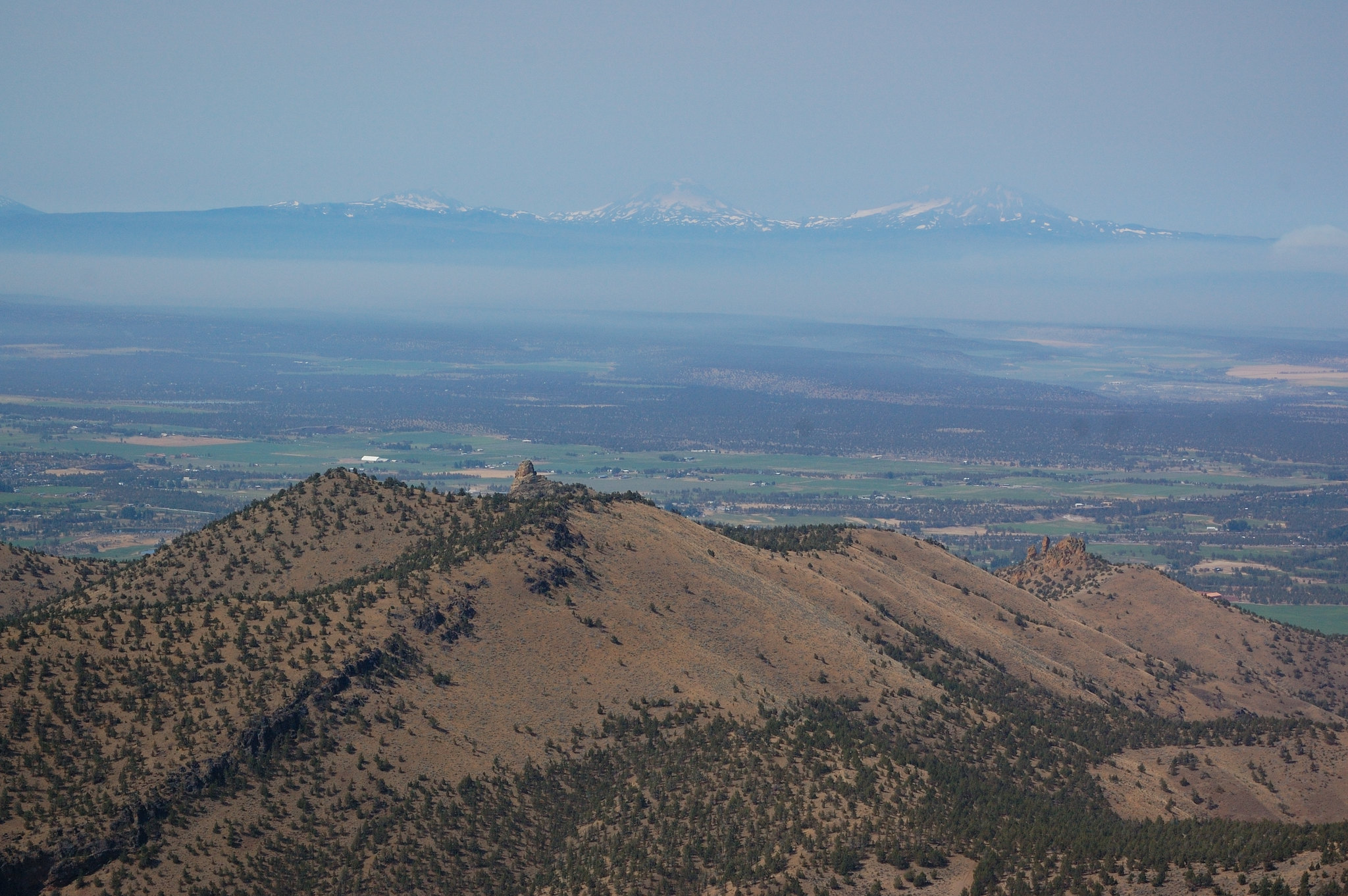 It was getting smokier quickly later in the day, but luckily it was clear for the eclipse

Nice views despite the smoke; I only visited the area in winter and fall, and now the smell of junipers and sagebrush so so much stronger! Even after a couple hours I was feeling it 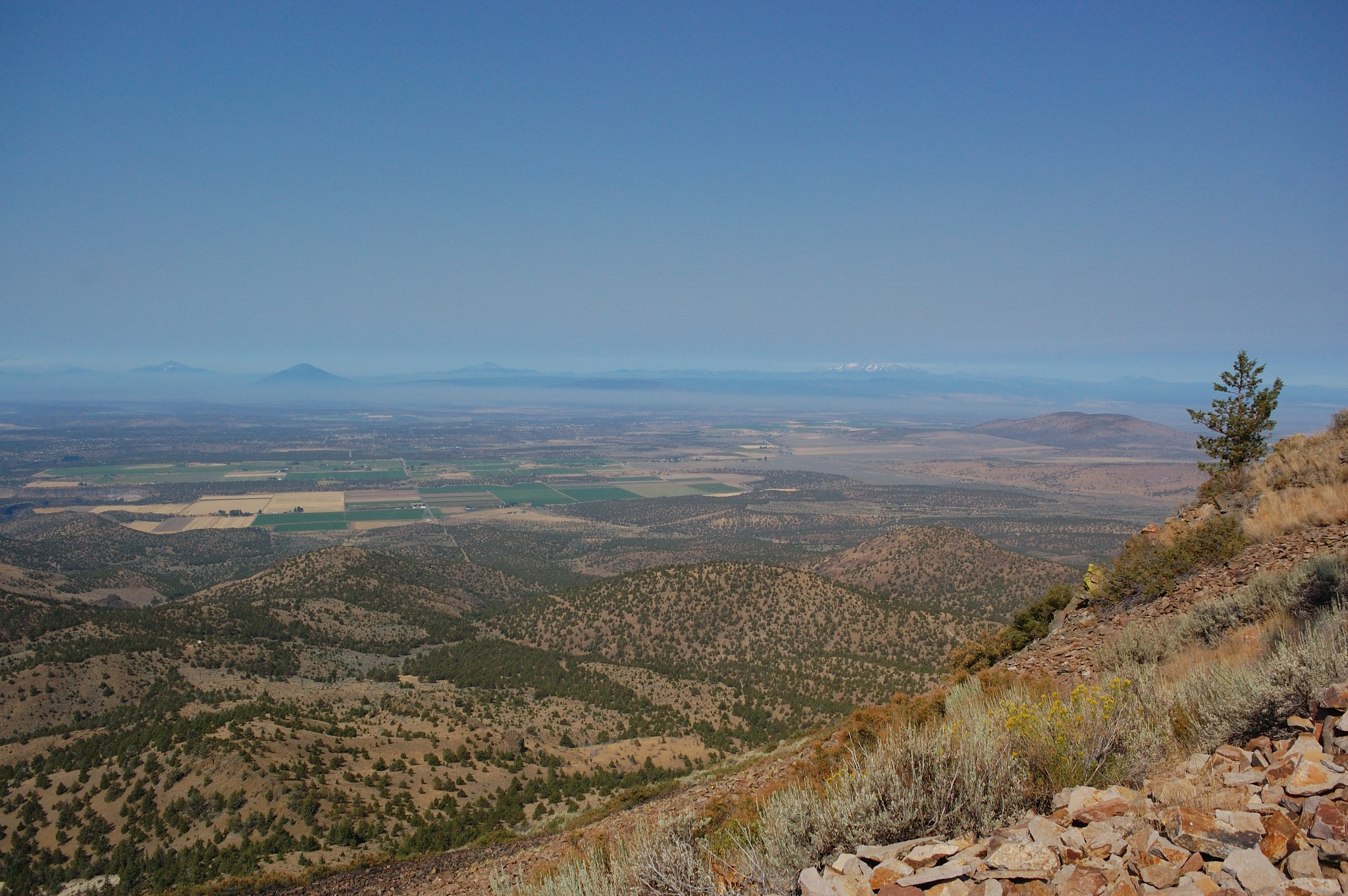 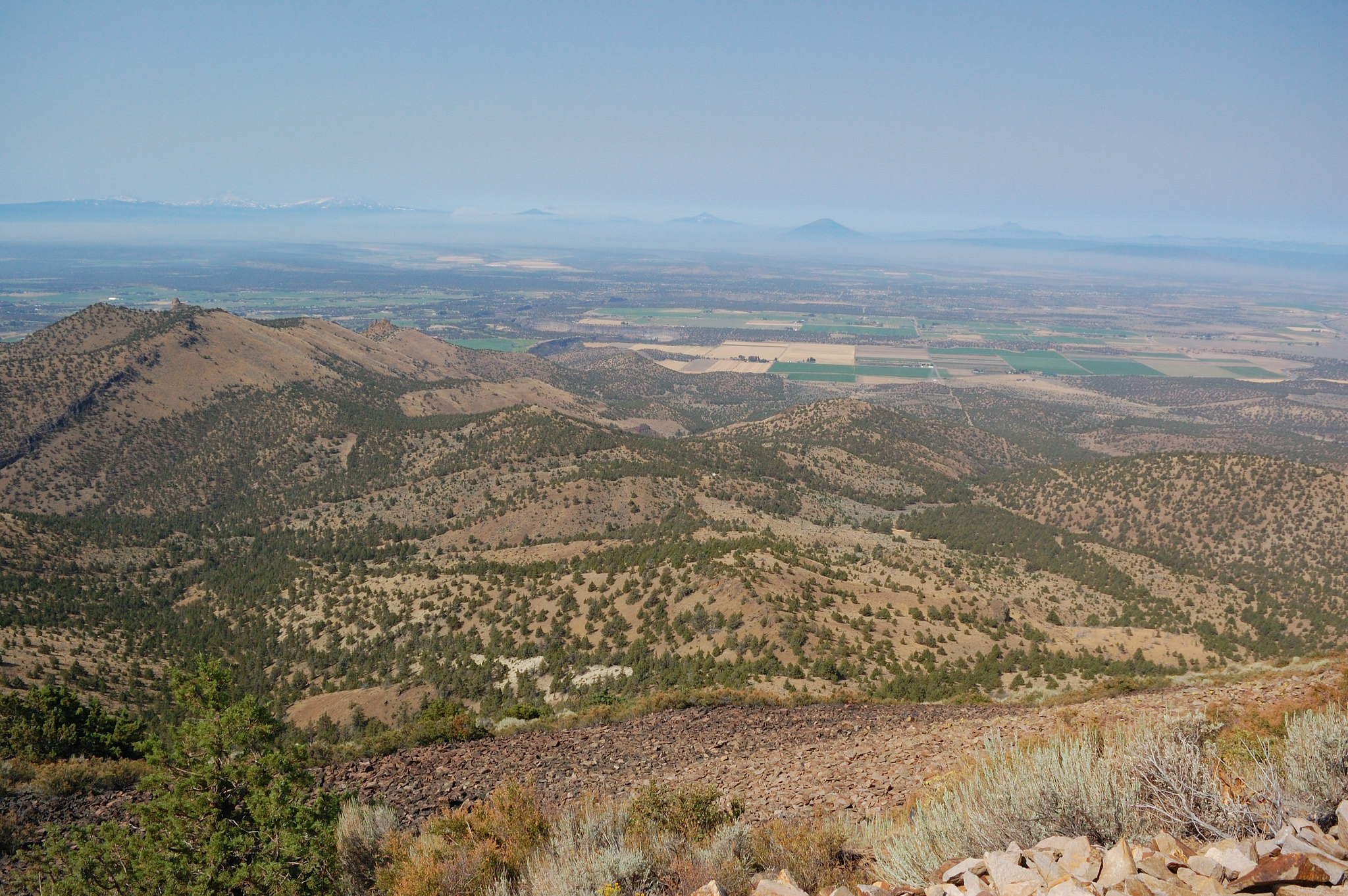 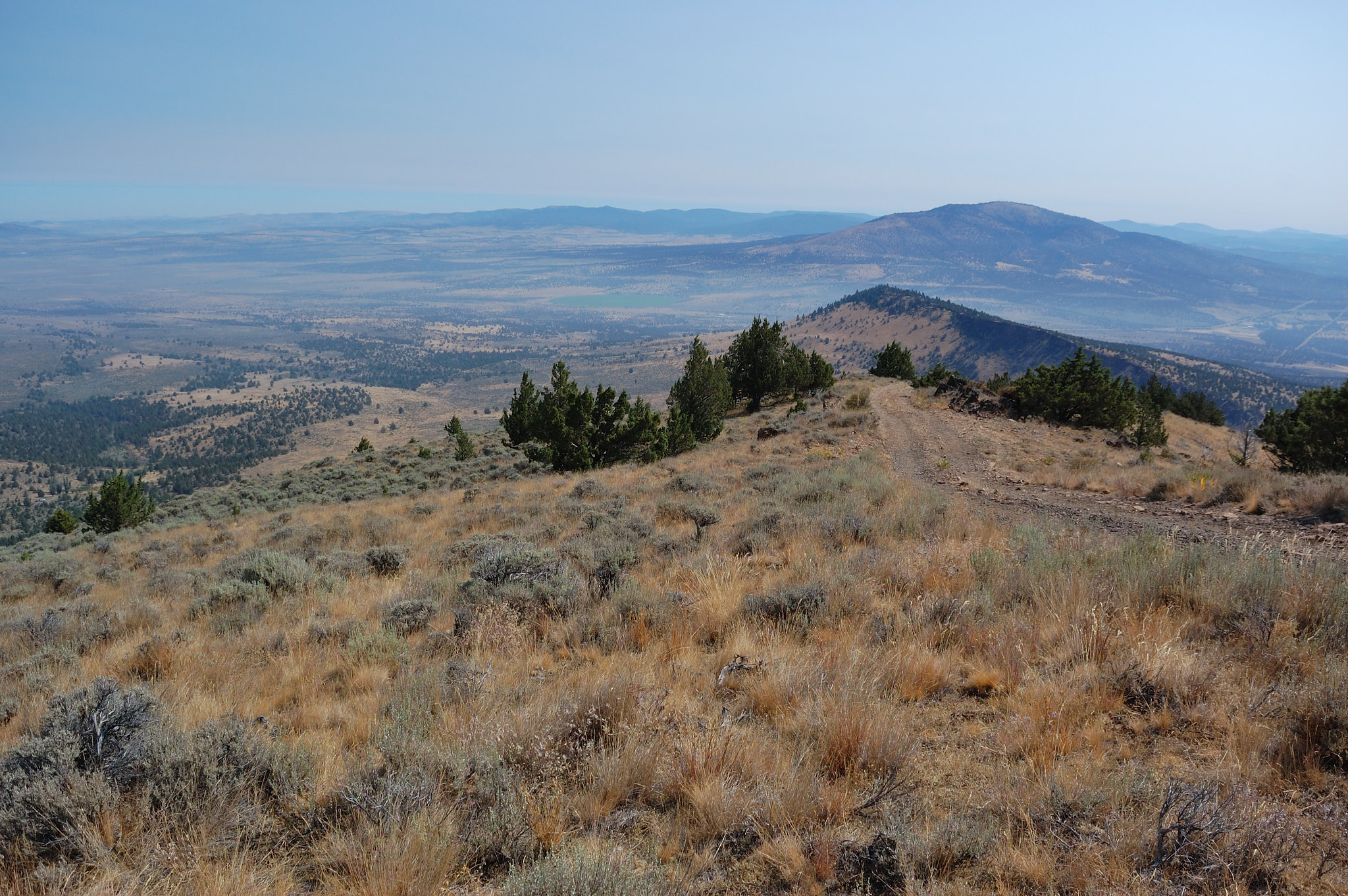 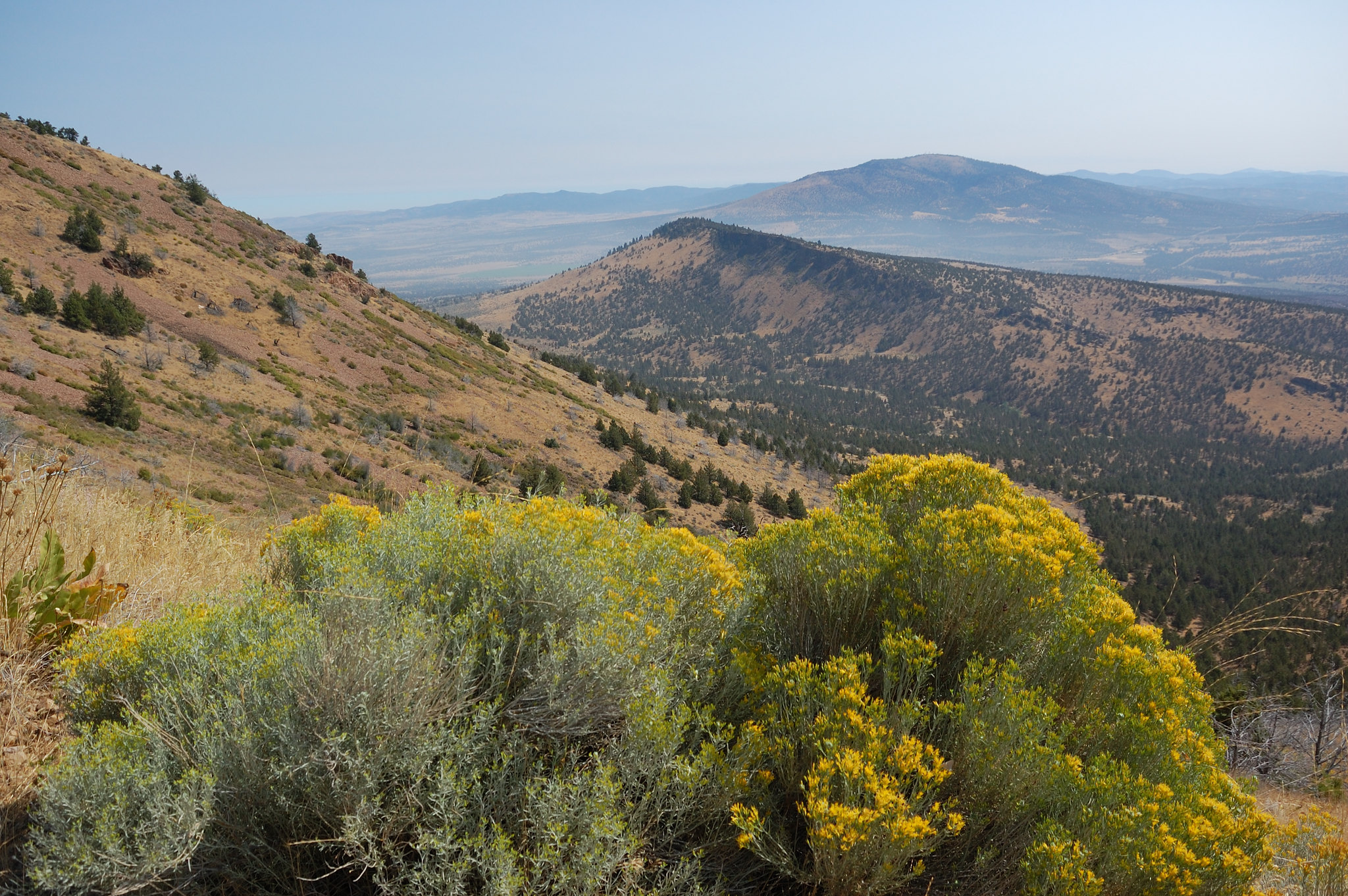 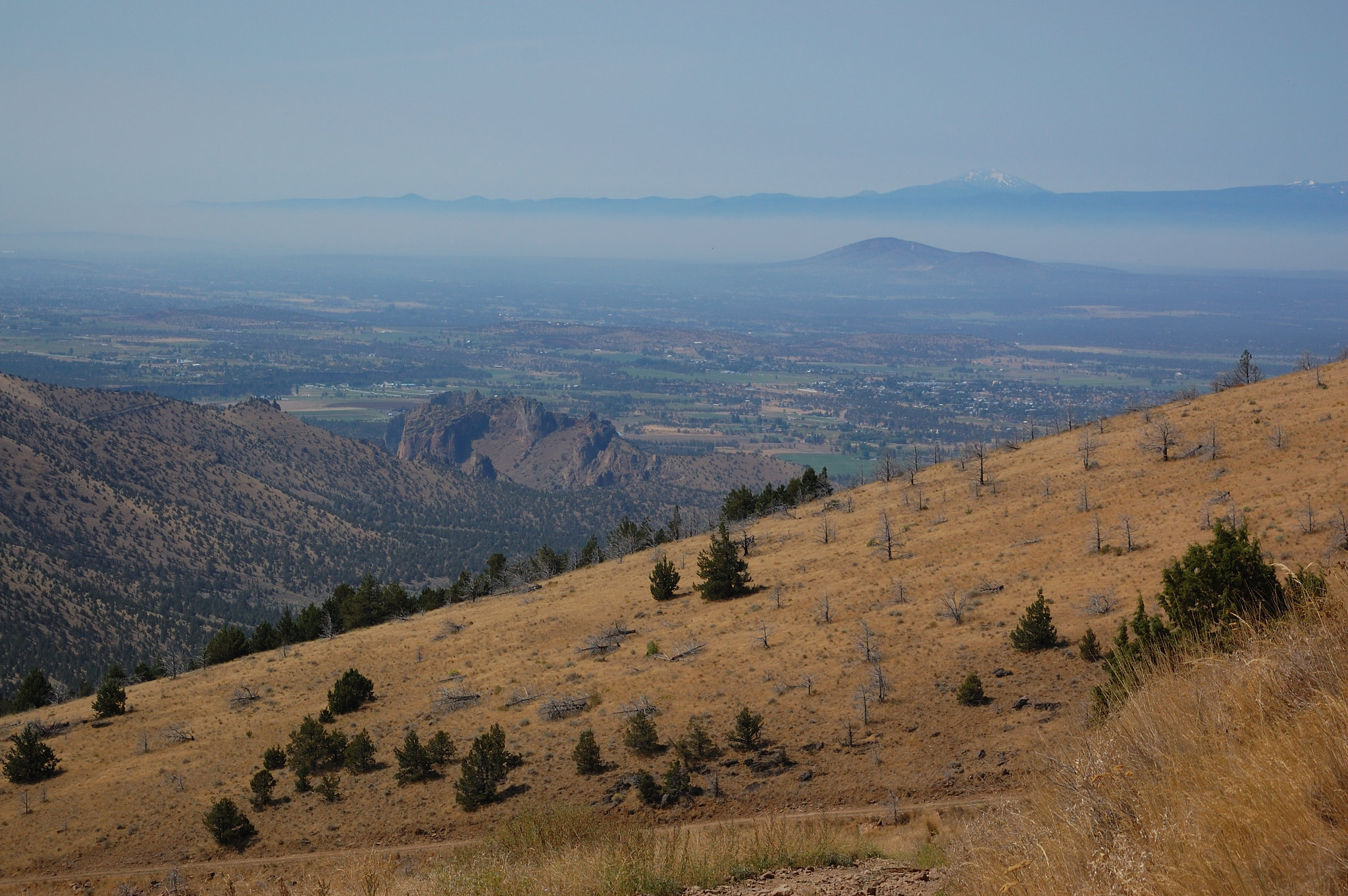 There were 3 paragliders on the mountain watching the solstice (I think they jumped from the plane that flew over us earlier in the morning), and when the show was over they took off and rode wind down to the valley 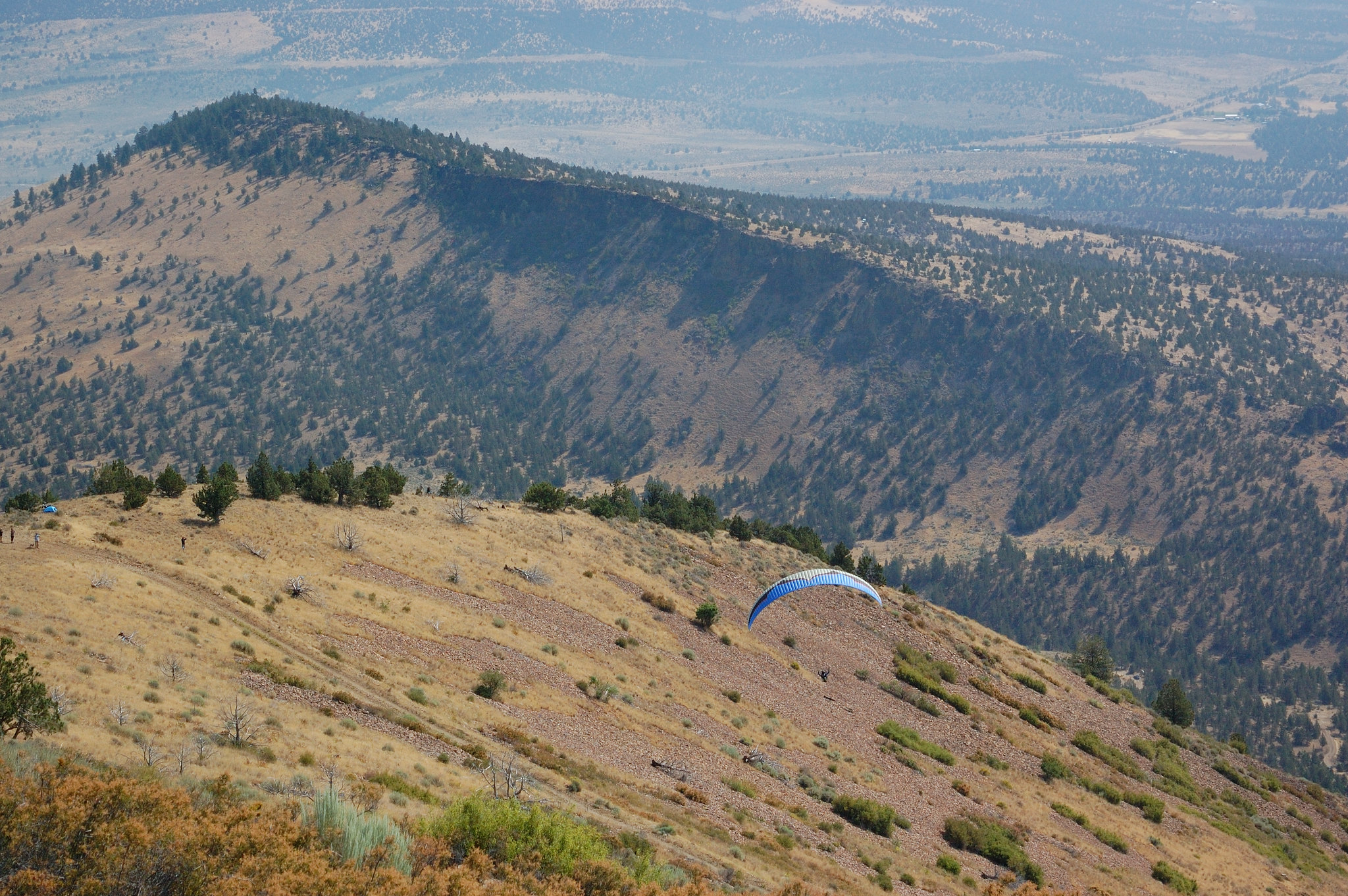 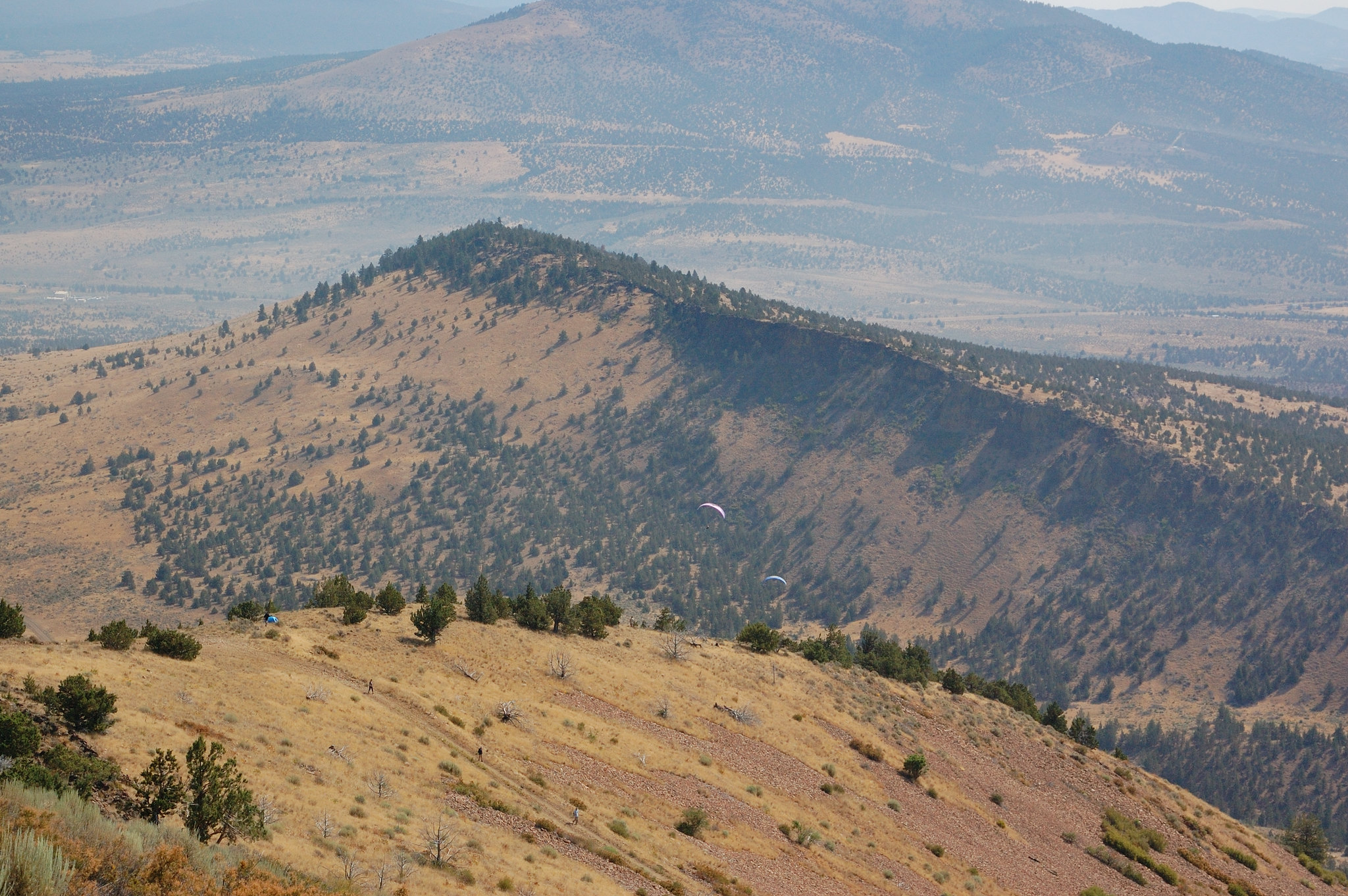 Great shots Romann, amazed you managed to get so many different shots in during the short window. I had a touch of "totality camera panic"

We could Venus but no other stars.
hiking log & photos.
Ad monte summa aut mors
Top

Random information but the eclipse passed over the continental US in a bit over 90 minutes, making the speed of the shadow about 2000 mph. It would require 72 seconds to traverse 40 miles, west to east.

I'm not sure how far Gray Butte is in respect to Jefferson (X,Y) on a Cartesian plane but that would affect your perspective of the shadow.
Top

Guy wrote:We could Venus but no other stars.

Venus was obvious, but Regulus was also visible, just below and left of the sun.
http://adamschneider.net/photos/
http://www.gpsvisualizer.com/
Top

Guy wrote:Great shots Romann, amazed you managed to get so many different shots in during the short window. I had a touch of "totality camera panic"

We could Venus but no other stars.

adamschneider wrote: Venus was obvious, but Regulus was also visible, just below and left of the sun.

Thanks! I was zooming in pictures at home trying to see any stars (my camera didn't pick any), completely forgot about it during the eclipse

. It was so fast! I also messed up camera settings, shooting at -2 light adjustment, but luckily it came out perfect and probably gave a bit more shutter speed. Hardly had to do any light adjustment at home.


Chazz wrote:Random information but the eclipse passed over the continental US in a bit over 90 minutes, making the speed of the shadow about 2000 mph. It would require 72 seconds to traverse 40 miles, west to east.

I'm not sure how far Gray Butte is in respect to Jefferson (X,Y) on a Cartesian plane but that would affect your perspective of the shadow.

Yes it's 38 miles per Google Earth, give or take. I think I was looking East at the sun and missed the moment Jefferson became dark. Hard to tell, was trying to grasp so many things at the same time. Due to haze, the shadow's edge wasn't sharp and did not become apparent until 5-10 seconds before it came, but it did move at cosmic speed! Probably the coolest thing I've seen that day.

Someone just posted a video of passing eclipse in a plane, really cool. They didn't say how long it lasted.
eclipse mid-flight
Top

An eclipse does not move at a constant speed. Oregon was at "the beginning" of the eclipse window and the shadow hit us more obliquely the same way the morning/afternoon sun does. If you are in such an area then the shadow is moving much faster. On the coast, it was estimated the shadow moved a little under 3,0000 MPH (roughly the same in South Carolina as it was finishing). A person in Missouri would have seen it move at around 1,600, with the totality shadow being rounder (assuming they were high enough to see all the edges, which would have probably required a balloon or plane). It is common for a person lucky enough to catch the edge coming at them to gasp or scream, as very few people see something that big move at them that fast. Reflexively they act as if a blow is coming at their face. Annie Dillard has a famous essay on the subject.

Your location with the multi-directional view a fantastic spot to catch this, I wish I had thought of it. Seeing the Sisters outside of the shadow is particularly telling. Put off by the traffic rumors I stayed in the Portland area (99.2% totality) and underwhelmed my kids. The difference in illumination between 99.9% and 100% totality is on the order of several magnitude (10,000 candle power less, I read somewhere). I screwed this one up. We'll probably travel to see the next one to makeup for it.
Top

Derwood - that's very interesting information, and you're right there were lots of screams as the shadow was coming onto us! And when you say this, it explains the few seconds before and after the totality (and I mean 2-3 seconds!):

The difference in illumination between 99.9% and 100% totality is on the order of several magnitude (10,000 candle power less, I read somewhere).

- when the first rays of sun came out, it became bright almost as fast as someone turned light on (especially with my eyes partly adjusted to darkness).

I hope you can see true totality with the next eclipse!

Just realized I had totality shadow in one of the pictures; Mt. Jefferson is just right off center of the picture, once it got dark its top became visible, backlit from the west 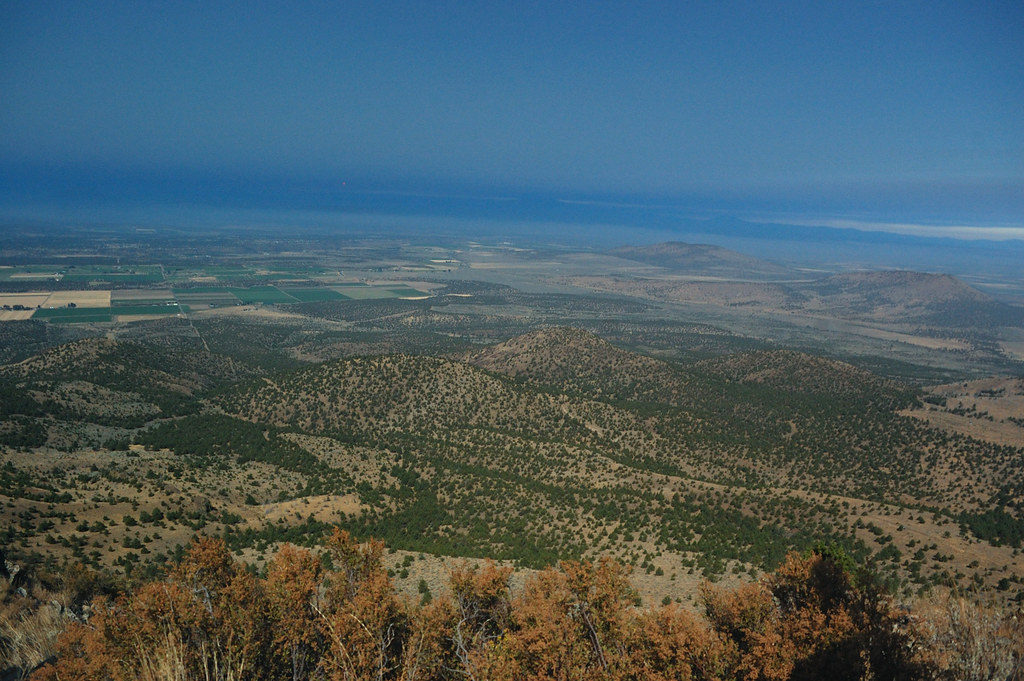 Roman, your photos give a good sense of the "360 degrees of sunset" effect that I had read about, but forgot to look for. Looks like you picked a great spot. I'd not heard of Gray Butte before. Thanks for sharing.
.
You have to milk the cow a lot to make a bit of cheese.
~Henri Cartier-Bresson