the sad funny story of my lost treking poles

Chat about non-hiking topics. The least serious of the forums on the site!
Post Reply
9 posts • Page 1 of 1

the sad funny story of my lost treking poles

It must have been around 1999 when I was headed down to Shasta for the first time. Wanted to upgrade my treking poles. I've used them countless times on countless miles since then. A bit beat up, but still functional.

A week ago, I had just one when I started out, and along the way realized it was gone. Maybe I just carelessly walked away from it after a break, or maybe I was tossing it down a steep slope and picking it up along the way (as I do when it's handhold-steep) and forgot about it. Or maybe I got pulled off my pack when I was bushwhacking. Oh well.

A couple days ago, as I approached my car, it ocurred to me my hands were empty. Hmm. The last 1/4 mile required a drop followed by an ascent. I must have had it then. I backtracked. Nothing. Kept going to the last place I remembered using it. Nope. Checked my phone for pics, thinking I must have set it down to take a picture. No luck.

How did I manage to keep them for 18 years, and then lose them one at a time over the course of a week?

I didn't really value them that much, but it drives me crazy wondering where they are.

Last known location of one. Was using it to push off. My other hand was holding a barleywine. Which may have contributed to the loss. Now that I think about it, seems when I lose stuff on hikes, alcohol is often involved.

Last picture of this one.

I've used one pole a little bit. I found it floating in the Deschutes River.

Several times I was walking along and realized I had left it at a stop. Had to backtrack to get it.
Top

I could lose my head if it weren't attached to my shoulders, as they say.

It might be time to invest in a Tile Mate for your more important items.
Top

"Attach a Tile to an item and locate it by sound when it’s close but out of sight. If you still can’t find your Tiled item, use the Tile app to see its last known location on a map, or leverage the Tile community to find it for you."

A couple of years ago, I left my Black Diamond high-dollar trekking poles at the Whitewater Trailhead wilderness permit box.....I didn't realize that I'd left them behind until I was about 2 miles into the hike. I'd leaned them up against the permit board and hiked on without them. Unbelievably, they were still there when I returned 7 hours later. My faith in humanity was restored....until I saw a couple of cars at the trailhead with broken side windows....

"Going to the mountains is going home."
— John Muir
Top

the bad guys are too lazy to venture up the trail even a bit?

I lost a pair eight years ago in weird circumstances: I was hiking into Jefferson Park (from the north, over Park Ridge) with three friends, and at a certain point I realized that they were going reallllly slowwwwww, so we arranged to just meet up later, at 5:00pm, at the PCT/South Breitenbush junction. I got there about 4:45 and waited. And waited. And got bitten by mosquitoes. And waited some more.

Finally, after an hour, I wrote a note and left it at the junction, and headed back toward the trailhead. When I got up on top of Park Ridge, I tried in vain to use my cell phone, and I was getting really flustered and annoyed and worried. Why hadn't they met me? Did they have a medical emergency? Were they lost (in Jefferson Park?!)? If something had happened before they got down into Jefferson Park, couldn't they have sent a note down with another hiker?

Anyway, in all of my flustration (that's a word, right?), I accidentally left my trekking poles leaning against a rock near the sign on Park Ridge that marks the boundary between Mt. Hood and Willamette National Forests. I never saw them again.

And my missing friends? It turned out that when they got to the top of Park Ridge, they were just plain TOO LAZY to hike down 1000' into the Park and back up again.

Also apparently too lazy to send down a note, or even to have ONE of them come down to meet me.

No, the extent of their efforts was to scratch my name into the PCT, which I eventually discovered several miles north of where we were supposed to meet: 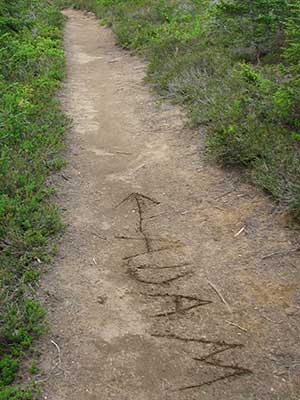 When I finally got back to the trailhead around sunset and found them lounging there — hey, at least they hadn't driven back to Portland — I was hopping mad and pole-less. You do not make plans to meet up in the wilderness and then simply change your mind and walk back in the other direction. Sheesh.

I'm thinking back to 2 years ago when that rifle was found in the desert after a hundred years.
Maybe your hiking poles will become relics over time.

Researchers are trying to crack the mystery surrounding the discovery of a weathered, rusted Winchester rifle in the mountains of remote eastern Nevada. The gun manufactured in 1882 was found leaning against a juniper tree on a rocky outcrop in Great Basin National Park during an archaeological survey in November. Nichole Andler, the park's chief of interpretation, said officials may never know when the .44-40 rifle was placed there, but it's possible it could have been left undisturbed since the 1800s. The area along the Utah border has a history of mining, ranching and hunting, she said, and park researchers are scouring historical documents to learn who might have owned the rifle. "I would say the possibilities are wide open as to who owned the rifle and why it was left there," Andler said. "It leaves a lot to the imagination and it may be a mystery that's never solved." Herbert Houze is the former curator of what became known as the Cody Firearms Museum at the Buffalo Bill Center of the West in Cody, Wyoming.

He said Winchester Model 1873 rifles such as the one found in Nevada were so valuable that he thinks whoever owned it leaned it against the tree and then was unable to find it.

"You just don't leave a gun like that there," he said. The rifles, which sold for $35 to $50 in the 1880s, now can fetch up to $15,000 in excellent condition. They were among the most popular guns on the Western frontier. After viewing photographs of the rifle, Houze said, he knows why it went undetected for so long: It blended in so well with its surroundings. "People probably have walked right by it," he said. "It was a one in a million chance they looked at it the right way and found it." The unloaded rifle's wooden stock was cracked but still intact, while its barrel was rusted. Its serial number was still visible, which allowed experts at the Buffalo Bill Center to determine it was made in 1882. Though a 1919 advertising campaign branded the Remington rifle as "The Gun that Won the West," the Colt single-action Army revolver probably deserved the reputation more, Houze said. In any event, he's thrilled by what he called the "rare find" in Nevada, which will eventually go on permanent display at the park.
Top

adamschneider wrote:When I finally got back to the trailhead around sunset and found them lounging there — hey, at least they hadn't driven back to Portland — I was hopping mad and pole-less. You do not make plans to meet up in the wilderness and then simply change your mind and walk back in the other direction. Sheesh.

Good thing you lost the poles. You might have stabbed those good-for-nothing hiking partners.
My trips at http://www.deanmyerson.org/photoindex
Top
Post Reply
9 posts • Page 1 of 1