Well, I learned something interesting this week: despite given pretty decent driving directions most of the time, Google has no idea how to give directions on Forest Roads. There are a couple of obvious problems, at least when it comes to the area north of Mt. Adams:

1) Google thinks all the USFS roads are essentially the same. This means that it will sometimes try to send you on a shitty little dirt track because it's a shorter distance than the well-graded two-lane gravel road.

2) Google thinks your top speed on all of these roads is about 20mph. This despite the fact that some of the forest roads are paved and striped, and most have a posted speed limit of 35 or 45mph.

And I think I know why these problems persist: there's no cell phone data service in those woods. Normally, their robots are watching everyone who's navigating using their directions (which, these days, sadly, is nearly everybody), and they learn from this. If they knew that people were flying down Cispus River Road at 50mph, they'd know that it's probably the best route to take... or at least a decent alternative. But instead, because they think all forest roads only let you go 20mph, they will try to get you onto a major highway ASAP, even if that's not really the best route. 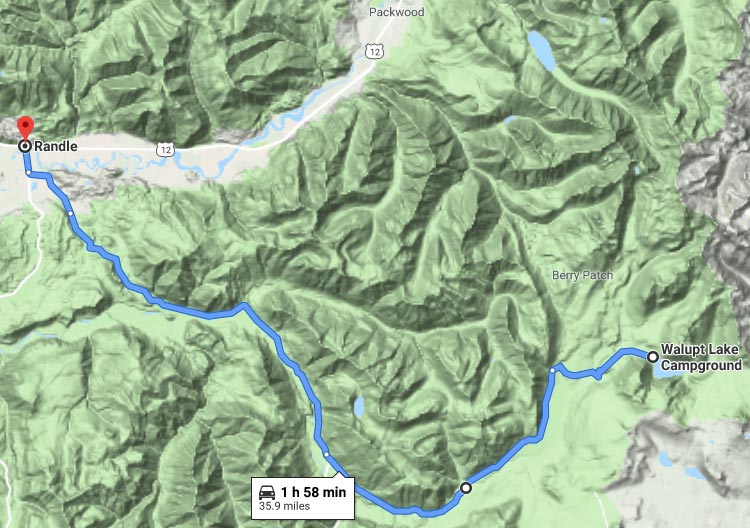 Here's my test case: Walupt Lake to Randle. Google wanted me to take FR-21 north toward Packwood and then US-12 west, with an estimated time of 74 minutes. Instead, I decided to take FR-21 south and then west until I met up with FR-23, which would take me into Randle. (FR-21 is paved west of Cat Creek, so only 6 miles of this route are on gravel.)

Google said this 35.9-mile route would take 118 minutes. My OSM-based phone app said 84 minutes. It actually took me 54 minutes. Granted, I was driving pretty fast, and certainly over the speed limit on the 35mph sections, but still, it took me less than HALF the time Google thought!
http://adamschneider.net/photos/
http://www.gpsvisualizer.com/
Top

And that's a good reason to call the ranger's office in Randle to determine the best roads if coming from the north. Those of us who live in WS/HR/TD and always come from the south use 2329 and go from there, but sadly I've only been once.

Oh, and when you get to Cispus Pass, make sure you go far enough to see into Cispus Basin.
Top

drm wrote: ↑
August 22nd, 2019, 9:00 am
And that's a good reason to call the ranger's office in Randle to determine the best roads if coming from the north. Those of us who live in WS/HR/TD and always come from the south use 2329 and go from there, but sadly I've only been once.

I did call the Randle Ranger Station on my way north, and they recommended avoiding 2329 and taking 23 all the way to 21. It goes much too far west, but the roads aren't bad.
http://adamschneider.net/photos/
http://www.gpsvisualizer.com/
Top

If coming from the south, call the rangers in Trout Lake.
Top

I did. They told me to call Randle if I wanted to know about anything beyond Babyshoe Pass.
http://adamschneider.net/photos/
http://www.gpsvisualizer.com/
Top
Post Reply
17 posts