Saddle Mountain in the snow?

Saddle Mountain in the snow?

I have done Saddle before in the autumn, but would like to check it out this time of year. I’m a mildly experienced hiker myself, and was going to try to head up there this week with a couple of friends.

The weather forecast says no more snow within three days of the planned trip, and conditions will be clear and about 35 degrees.

Does anyone have advice about heading up there in wintry conditions? Do you think the chain-link trail would be sufficient to keep us from slipping?

Thanks in advance!
Top

elizathebrave wrote: ↑
February 26th, 2019, 8:05 am
Do you think the chain-link trail would be sufficient to keep us from slipping?

Unlikely? Would absolutely be bringing your own traction, based on this report, from last Sunday (2/24), on the PortlandHikers Facebook group...

I have no first hand info about current conditions but I do have some experience hiking there in the winter. In the very least, I'd bring something for your boots that have some bite (snowshoes, spikes, etc). You just won't know what's there until you step into it (deep snow or wind scoured ice, etc). I'd be more concerned about certain areas that are not near the summit, which I think is safer than the rest of the trail due to all the hardware that's installed. The non-summit danger areas are the places where water has washed the trail a bit clean. I think that's two spots about half way up. You might find large ice buildup that makes proceeding risky. I'd also be concerned about the section that emerges from tree cover for the last time (the "saddle" area). The stairs or whatever else is there is exposed and can get ice built up.

Summary: It's doable but with caution. Be mentally prepared for turnaround disappointment.
Top

Based on the report that Karl linked to, there is snow down to the TH, and it looks like deep drifts and cornices higher up. One would not expect "ice" in such conditions, and Microspikes would be useless. Given the current weather conditions, many many areas have basically been turned into mountaineering objectives, apparently including Saddle Mountain. Depending on the snow quality and your experience level, it would look like "ascent" style snowshoes (ie, MRSs) would be necessary, or else actual mountaineering crampons. (The latter may be best if the snow were to set more in the coming sun later this week.) You would probably also want to take an ice axe.

That all said, as you describe yourself as "mildly experienced" I would recommend either going with someone who has mountaineering experience, or else waiting until Saddle Mountain melts out this spring. 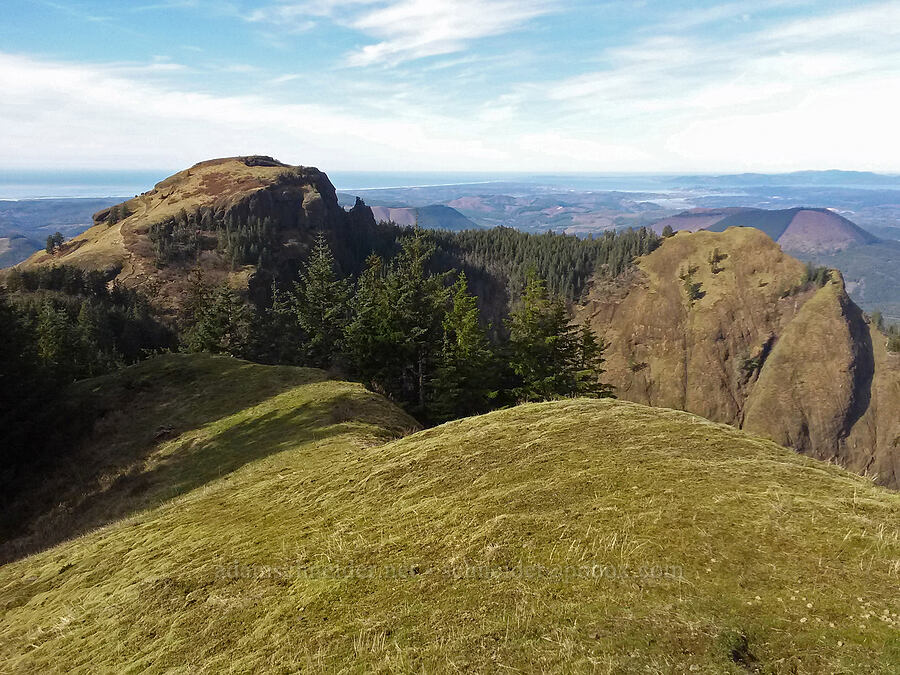 It was a sunny day with snow on the trail top to bottom, considerable ankle deep snow the last half mile to the top. The user path no longer followed parts of the official trail on the last half mile. Some crawling under trees heavily sagging from snow (alder or vine maple) was required. On this day snow bombs in the woods were downright annoying but fun to watch from a safe spot. I was nailed a couple of times. There was no dangerous ice that I found although ice-fall from above is a risk in a few places that cross under rocky cliffs. I didn't use any foot traction tools. I only used ski poles most of the way. They were very helpful near the top during the steep parts, both up and down. It's easily doable but the normal snow travel caution is necessary.

The road has two snow covered sections. The first section about halfway up is covered but rutted down to pavement so it's passable. The second section is the last quarter mile that had a few places where you needed to run at it and floor it to get past the snow. I'd advise stopping short of that section. When I returned a Cruise America RV was stuck in the heavy snow just uphill of where several cars smartly parked to avoid it. A tow truck was making a mess of the nice wheel ruts that are now gone. Nobody tried to park in the parking lot due to deep snow.
Top
Post Reply
6 posts • Page 1 of 1