), so I opted for a dayhike in the Indian Heaven Wilderness. Having explored the S end of the wilderness in August in bad weather, I thought it deserved another look in the excellent weather we had on Friday. I really wanted to explore the Basin Lakes (Peggy, Janet, and Darlene), mainly because they didn’t seem to be accessed by an established trail. You can get to the S end either from the Falls Ck Horse Camp TH or along the PCT from the Crest Horse Camp TH; I chose the PCT approach because it is a mellow, pleasant path through the forest past two small lakes (and getting to it also involves minimal driving on gravel roads). 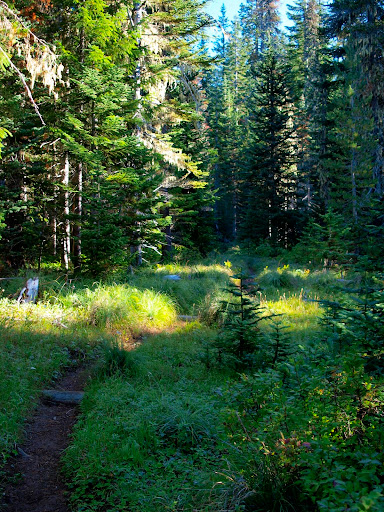 After barely a mile, I came to one of the Sheep Lakes that sits right next to the PCT. Although there were mosquitos around, at no time were they anything more than just minimally annoying, even at the lakes. 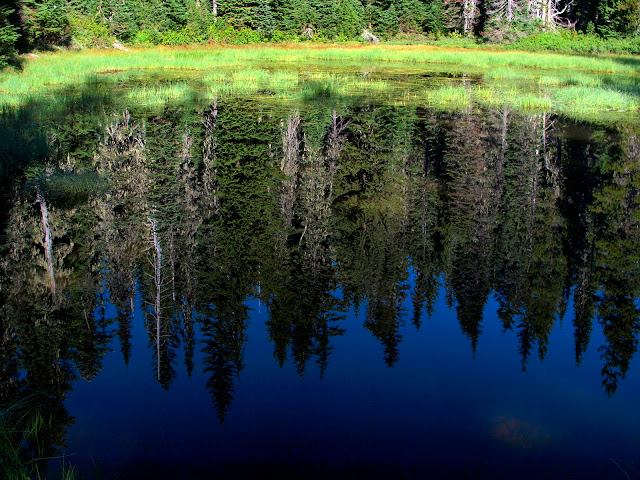 And, barely a mile later, to Green Lake, 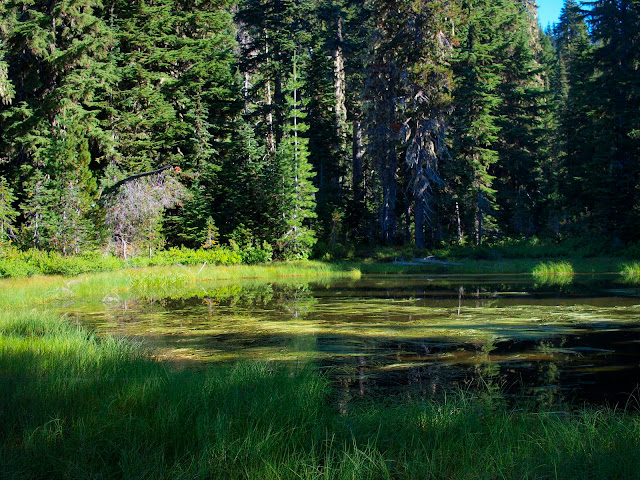 whose summer draw down has created abstract patterns in aquatic grasses on its surface. 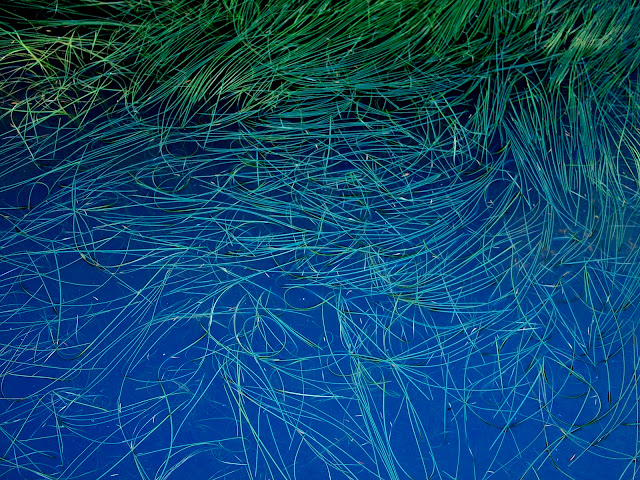 Soon a the trail opens on a meadow, with Red Mountain in the distance. The little white dot on its summit is the lookout. 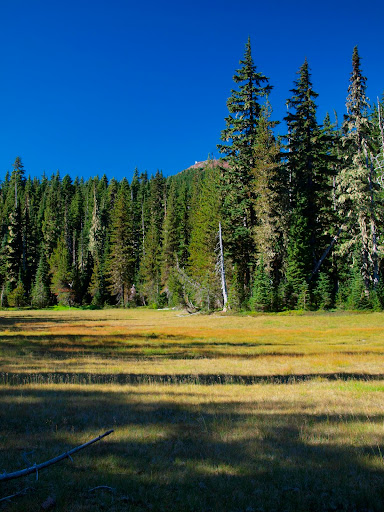 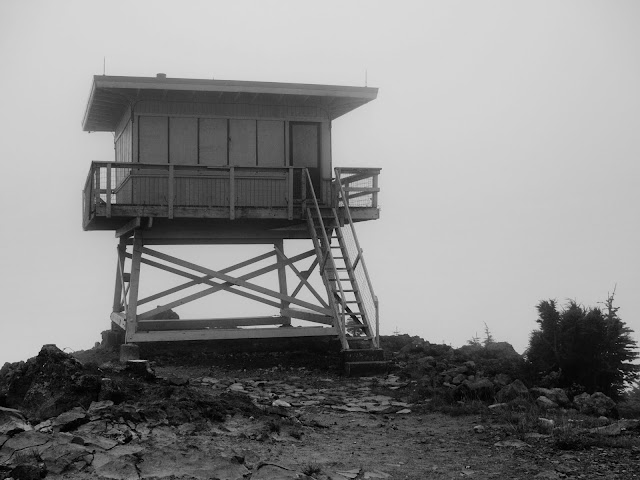 I continued N on the PCT, past its junction with Trail #171A (my return route), and started the gradual climb up the flanks of the aptly named Berry Mtn complex, where there were still a few handfulls of ripe and tasty huckleberries along the trail plus a good view of Mt. Hood and Red Mtn (with lookout). Jefferson is barely visible just right of Hood. 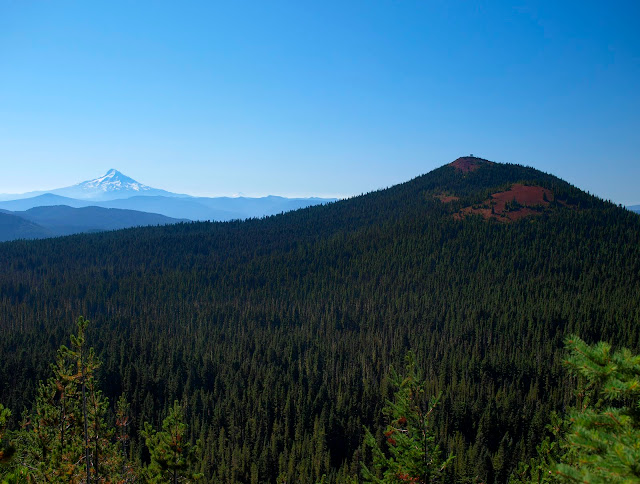 At some point in the past, the PCT was re-routed to go over, rather than E of the Berry Mtn complex (the 1:24K map is correct, the 1:100K map is not), which is great because it gives you views of Adams, 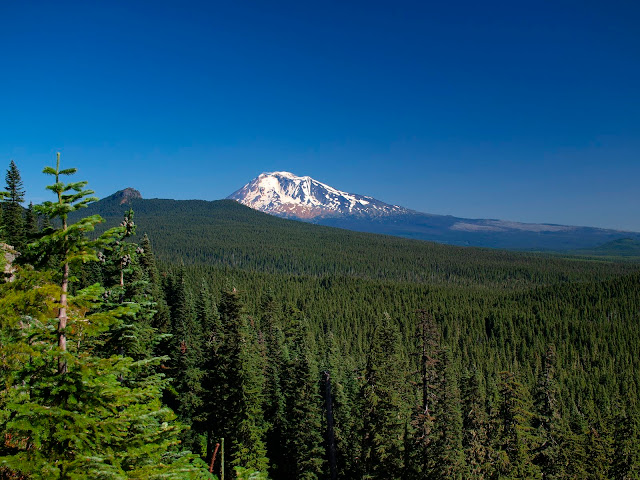 and St. Helens. The Basin Lakes are amongst the trees in the foreground. 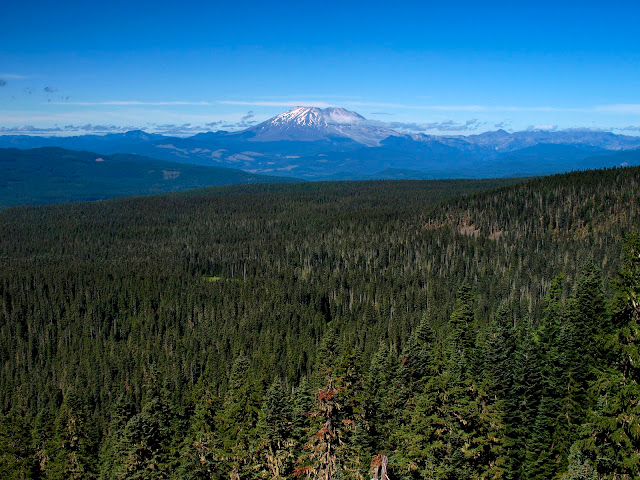 The PCT descends into a saddle just S of Gifford and it was here that I left the PCT and headed W downslope toward Darlene Lake. I was prepared to simply go XC but suspected that, given the long history of human use in this area, that these lakes were served by a use trail or two. It was no surprise, therefore, when I hit a very good use trail not 20’ below the saddle. I followed this trail, which had very clear and very sketchy sections, toward the lakes. 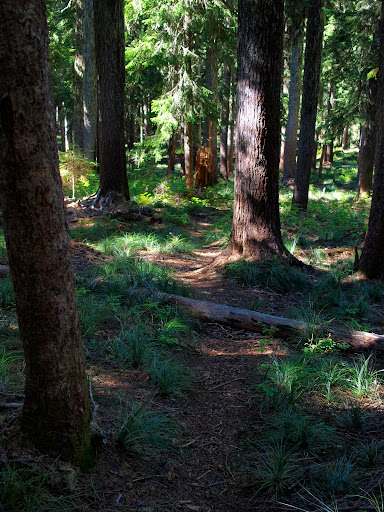 Following this trail made me miss Darlene Lake and took me directly to the little jewel that is Janet Lake. 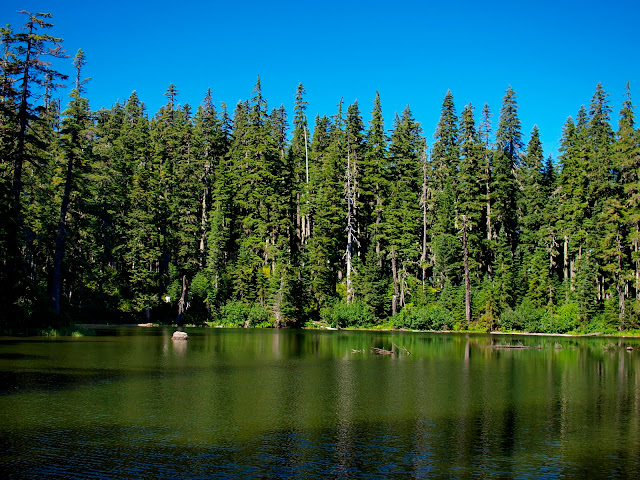 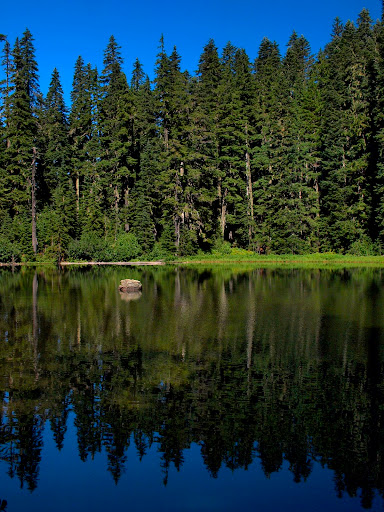 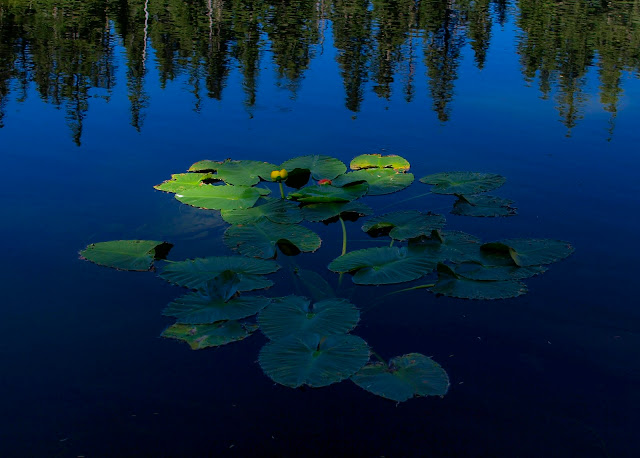 I could see big fish in the lake through it's clear waters but no sign of campsites. The use trail continued NW around Janet Lake, probably heading toward Peggy Lake. I would guess that there is also a use trail of sorts that follows up the Falls Ck drainage for a shorter approach from the Falls Ck Horse camp. Having not yet visited all these lakes is just a good excuse to come back to this wonderful area. Since I’d planned a loop, I headed SW from Janet Lake XC toward Trail 171. Except for thicker vegetation (and nettles!

) around creek crossings, this traverse was through remarkably open county. 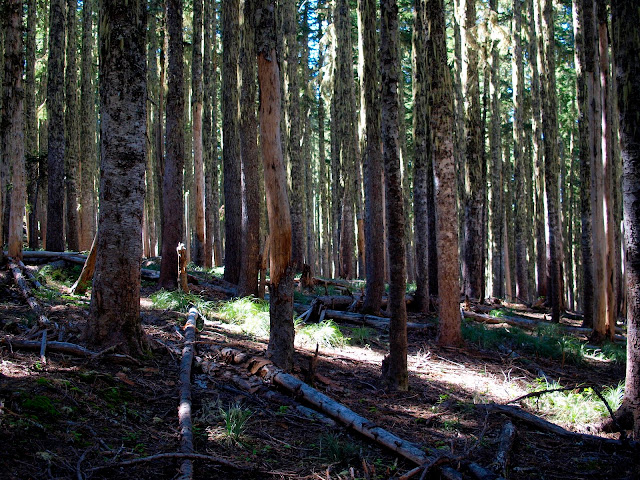 In less than a mile, I intersected Trail 171 and turned left on it, heading SE to Race Track Lake, which is showing its shoreline in the late summer draw down. 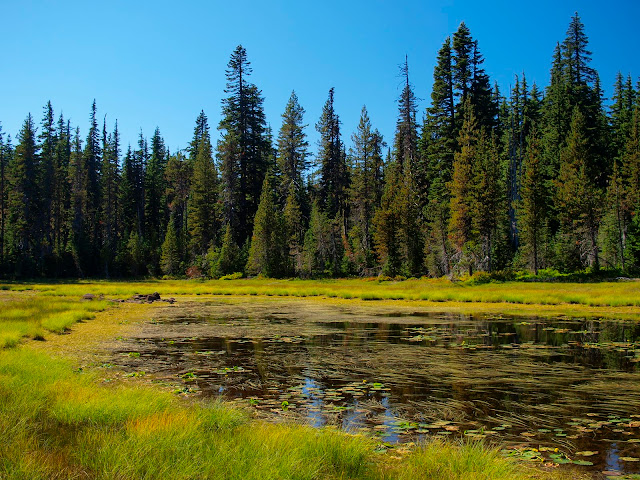 The lake sits on the edge of the Indian Race Track meadow, which is also where Trail 171 joins Trail 171A. 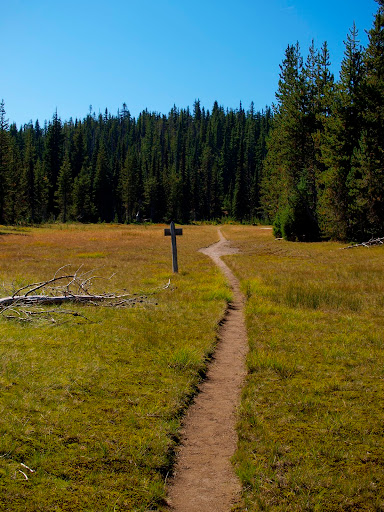 I followed 171A and then the PCT for a leisurely walk back to the TH. Sunshine, warm (but not too hot) temps, minimal bugs, views, lakes – another great day in the woods! Even though it can have a short season and way too many bugs, I'm starting to put Indian Heaven among my most favorite places to hike near Portland. In the Fall - after the snow is long gone and the bugs are dead - it's just a wonderful place to visit 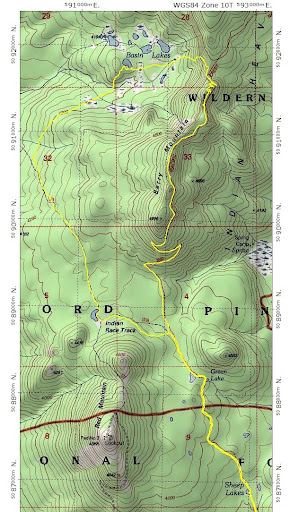 Bruce - I am sorry that the changing weather killed your plans for the Olympic Mountains. That looks like a delightful loop and I now wish to go to Indian Heaven! I have downloaded your map and intend to follow your footsteps around that loop. Thank you for a great report and (as always) excellent pictures.
Some people are really fit at eighty; thankfully I still have many years to get into shape…
Top

I was actually considering a Basin Lakes loop today from Falls Creek based on airdrum's detailed trip report from last year:http://www.portlandhikersfieldguide.org ... &sk=t&sd=a. Instead I opted for a lazier, more conventional stroll at Olallie Lake. It's interesting that you found the old trail right away after dropping from the ridge, but I suppose that saddle is the logical connection point.

bobcat wrote:I was actually considering a Basin Lakes loop today from Falls Creek based on airdrum's detailed trip report from last year:http://www.portlandhikersfieldguide.org ... &sk=t&sd=a. Instead I opted for a lazier, more conventional stroll at Olallie Lake. It's interesting that you found the old trail right away after dropping from the ridge, but I suppose that saddle is the logical connection point.

Thanks for the link to airdrum's TR. His map explains why I was able to find a discernible trail right off the saddle. The old trail only passes Janet Lake, so a visit to Peggy or Darlene is on your own XC.

I came across a copy of Mel Hansen's 1977 Indian Heaven Back Country in which he describes a "Gifford Peak Way" trail from Falls Ck TH to the PCT. His description of it corresponds with the track shown on airdrum's map, only Hansen says that the trail was maintained by volunteers and not the Forest Service. Despite that, the main lakes were apparently named after the wives of Forest Service employees - a no-no since you can't name a geographic feature after a living person. So while he calls it the "Darlene Lakes", the official maps have it as the "Basin Lakes" and the names of individual lakes only appear on non-USGS products.

Another interesting loop possibility from the S would be N on the PCT (for the views) to Blue Lake, then S on Tr 55 to Tombstone Lk then continuing S on what was once the PCT (and before that the Cascade Crest Trail) to where it meets the current PCT just before the PCT/Tr 171A junction. Could be fun loop with some routefinding.
Top

VanMarmot: Your other loop suggestion may be the Indian Heaven hike I do this year . . . if the weather holds up.

Ah, my kind of day hike! I still want to do a big loop of some sort in the Indian Heaven area this year. Maybe October...

Great pics! You found some remarkable features (like the grass and lily pads on the water) that many of us would have blundered past. Very cool.
Jim's Hikes

bobcat wrote:VanMarmot: Your other loop suggestion may be the Indian Heaven hike I do this year . . . if the weather holds up.

Crusak wrote:Ah, my kind of day hike! I still want to do a big loop of some sort in the Indian Heaven area this year. Maybe October...

Great pics! You found some remarkable features (like the grass and lily pads on the water) that many of us would have blundered past. Very cool.

Thanks! Try to get to Indian Heaven in Oct - you won't be sorry. Try the loop around Bird Mtn from Cultus Creek TH or the one I just posted for the CCT/PCT.
Top
Post Reply
9 posts • Page 1 of 1