Not all trip reports have to be about adventures deep in the wilderness. Sometimes they can be about exploring what's out there from the seat of a car…as valuable reconnaissance for future hiking trips.

My wife, Dawn, and I spent three nights and four days in NE Oregon relaxing and seeing the sights beginning 9/14/11.

Our base camp was at the Bronze Antler B&B in Joseph, OR. Be expected to be pampered if staying there. Our hosts, Heather and Bill, really know how to treat their guests.

The town of Joseph is perfectly located near Wallowa Mountain trailheads, Wallowa Lake, Hells Canyon and many more recreational opportunities. Joseph is a hip place for artists, as well as having many great restaurants. The view of the Wallowa Mountains is fantastic.

One of the many pieces of artwork along the main street in Joseph. The sculptures are called the Bronze Artwalk. 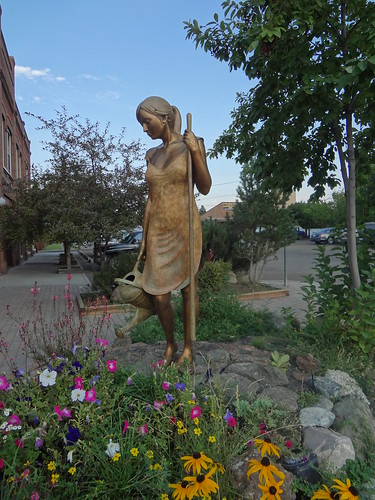 After a restful first night at the Bronze Antler, Dawn and I drove 7 miles to Wallowa Lake to take a trip on the Wallowa Lake tram up Mt. Howard. When we arrived to purchase our tickets, we were told that the tram was shut down due to high winds and to check back in an hour.

So we wandered around, killing some time.

First, we went to the Wallowa Lake Marina. It was our good fortune to talk to one of the owners, Gina Barstad. If her last name sounds familiar, it's because she is the sister-in-law of Fred Barstad. Fred Barstad is the writer of the Falcon Guide book, "Hiking Oregon's Eagle Cap Wilderness." She was a gold mine of information and had accompanied Fred on many of his hiking trips. I found out that if I want to get accurate information on the trail conditions within the Eagle Cap Wilderness, I should call Gina at the Marina, and not the usually clueless U.S. Forest Service. Even though it was their official last day of business for the season, Gina answered our many questions about the trails in the area and sold us an autographed copy of Fred's hiking book.

After visiting with Gina, Dawn and I walked over to where the Wallowa River flows into Wallowa Lake. There, we found hundreds of salmon spawning in the river. It looked like we could just reach in and grab them, not that I would do that. It was only the second time I have seen spawning salmon with my own eyes. Even though I have seen it on TV nature shows many times, it's much different in person and very interesting to see. 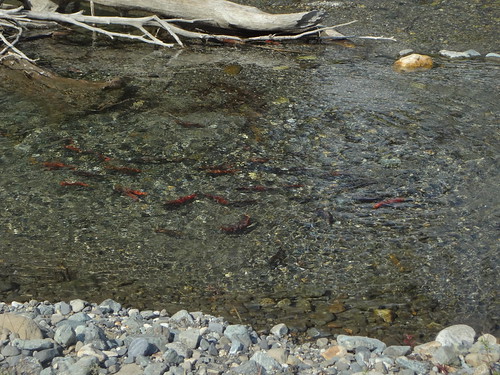 Before heading back to check to see if the tram was running, we took the opportunity to check out some cabin rentals. Websites with these same vacation rentals are great, but they don't really show things that one can see first hand. The websites usually don't mention that a cabin is next to the RV park or the go-kart track, or that they have a $75 cleaning fee. Now we have a record of acceptable units for future visits.

After getting a good understanding of the rental market, we headed back to the tram terminal. Before arriving, we could see gondolas going up and down, indicating the tram was in operation. We paid our $26 per ticket and set off to higher altitudes… minus the effort of hiking 3700 feet.

Fifteen minutes later we were at 8150'. Being an avid hiker who has climbed many feet uphill, it was nice to gain it so easily. A sign upon exiting the gondola at the upper terminal noted that if we hear a siren, to immediately come back to the terminal. The siren was to warn visitors of dangerous weather, such as lightning and wind.

The top of Mt. Howard: 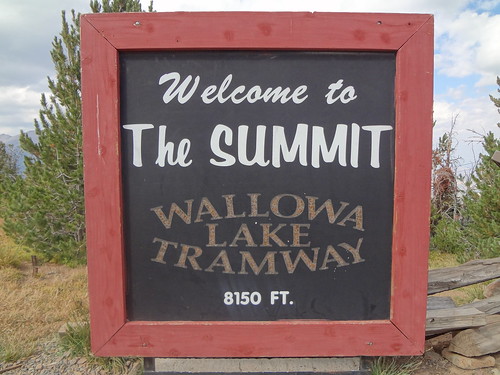 At the top of Mt. Howard, there are several trails going to three different overlooks, totaling 1.9 miles. 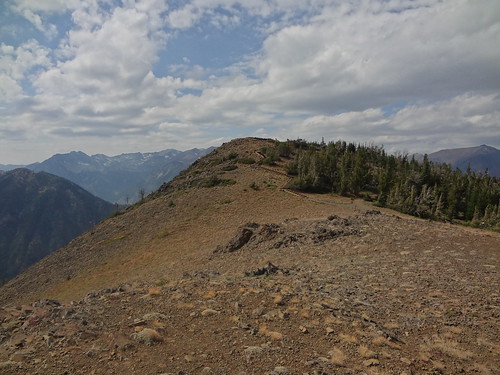 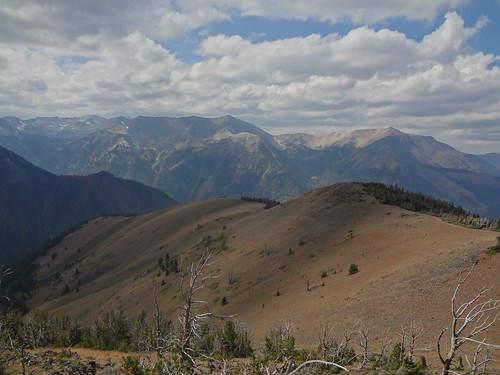 The next overlook we visited was the Summit Overlook. The perspective from there include views into the states of Washington, Idaho and across the northern panhandle of Idaho into Montana.

The third overlook we hiked to was the Wallowa Valley Overlook. From there, the communities of Joseph, Enterprise, Lostine and Wallowa are visible. At this overlook, the aggressive resident chipmunks begged for food. We did not feed them, but it was obvious from their actions that others had. One of them tried to crawl up our pants while we were taking pictures of them. 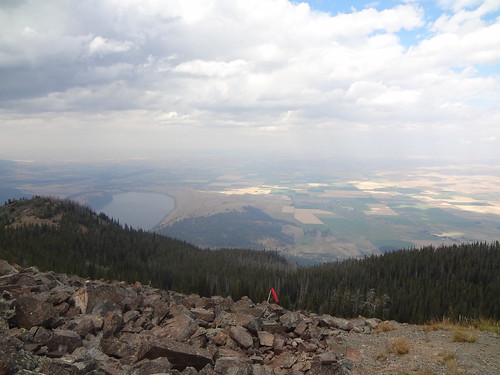 Just as we were heading back to the upper tram terminal, it started to rain. Then, it rained harder. Upon entering the terminal, an incredible hailstorm arrived. Even though Dawn and I were prepared, I would rather not be caught out in that type of weather. So back down we went.

View from the tram gondola: 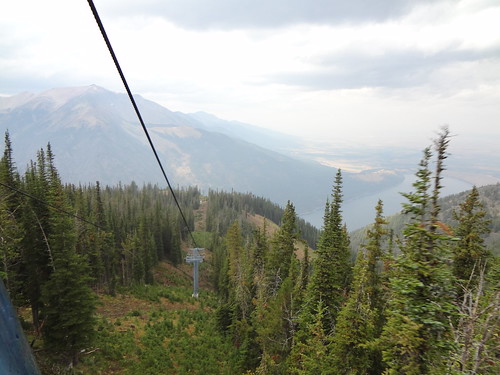 When we got back to the bottom terminal, there was no evidence of rain, hail or wind. Going down 3700' can make a huge difference in the weather.

After a second night at the B&B, the next day we decided to visit the Hells Canyon area. We took U.S. Forest Service Road 39 (via Hells Canyon Scenic Byway) south, passing many interesting sights and beautiful views along the way.

Cows on the road, not something you see on the streets of Portland: 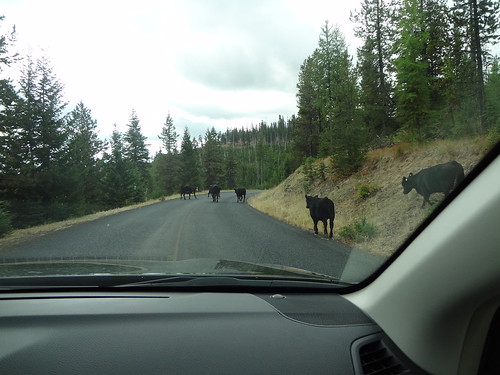 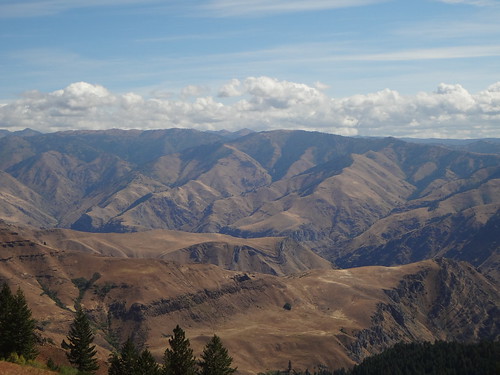 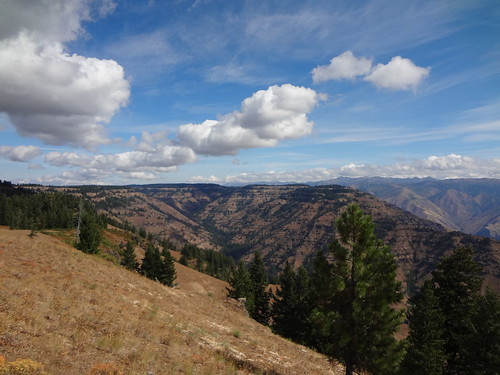 We continued on Forest Service Road 39 to Highway 86 to Oxbow, then crossed the Snake River into Idaho. We followed the Hells Canyon Reservoir road 23 miles to Hells Canyon Dam before crossing back over to Oregon where the road dead-ended. Along the way, we passed many trailheads. Every time I see a trailhead it makes me wonder, "Where does that go?" I'll investigate those trails some other day. 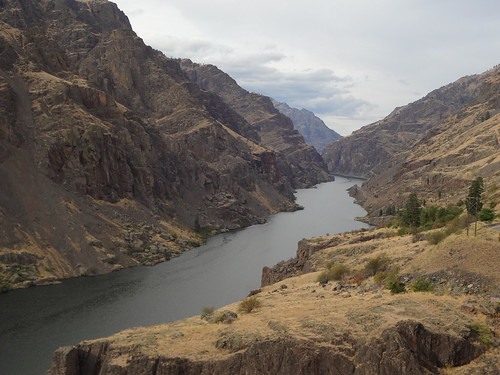 After parking at the Hells Canyon Creek visitor center, we hiked 1.2 miles along the Snake River to Stud Creek. Nothing special about the hike, but I did touch the Snake River for the first time. We also saw the spot where jetboats and rafts are launched. Dawn dug around in the shallows and managed to find a flake of gold… a reminder that this area was once a top destination for prospectors in the past. 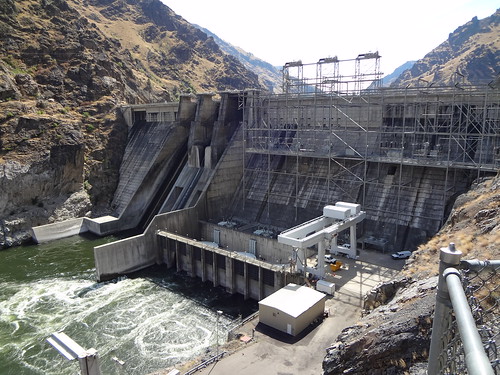 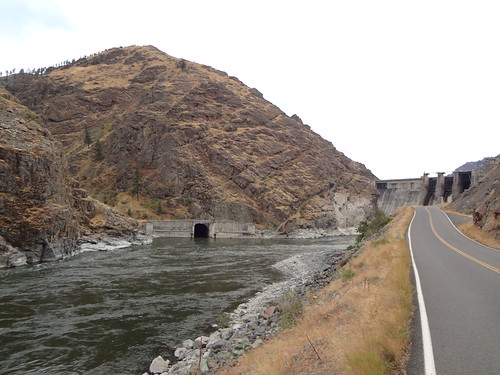 Hiking along the Snake River: 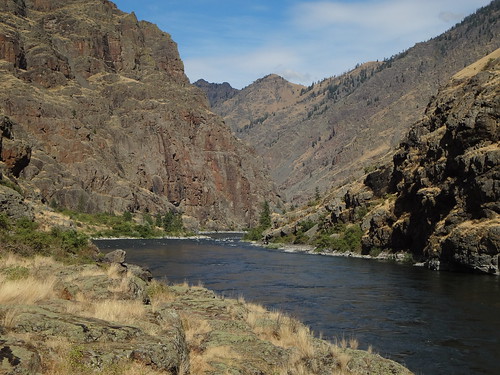 After visiting NE Oregon, Dawn and I now want to move to the Joseph area. Land and houses are cheap and the views are great. Maybe in a few years. For now, we will keep on dreaming.
Make now always the most precious time. Now will never come again.
- Jean Luc Picard
Top

That is a beautiful area. Thanks for the great report. I've always wondered what it was like up on that tram.
Top

Excellent report! You brought a perspective of the Northeast Oregon region that generally doesn't make it to the forum. Thank you for the trip report, Born2BBrad.

One of my favorite photos out of the bunch is Hells Canyon Overlook looking north, the clouds really made that shot!
http://www.photographmemories.weebly.com
Top

two thums up for the awesome report and pictures. Sounds like you and your wife had an amazing time over there.


I took my bike up the tram and biked down from the top of Mt Howard about 8 years ago. It leads you down the mountains and into farmlands, then to joseph and 6 more miles or so back to the cabins near the lake. I took two wrong turns(stupidity) and ended biking way longer than I should have had too. im a little fuzzy on memory but I remember it being a pretty rough ride down some very loose rock. the guys at the top of the tram were teasing and telling me about all the bears and mountain lions they had seen lately lol. trying to scare the city boy i guess.


thanks for the report and bringing back some good memories.
Top

Thanks for the report. I love this area of Oregon! Greg and I hope to get back there next summer. I remember camping at Wallowa Lake State Park with my family when I was a kid and how the tame deer just came right into our campsite when we were making dinner. I also remember driving past the tram and (uselessly) begging my parents to let us go on it (as an adult, I now understand why they weren't thrilled at the idea of paying for four people to ride it!).


I found out that if I want to get accurate information on the trail conditions within the Eagle Cap Wilderness, I should call Gina at the Marina, and not the usually clueless U.S. Forest Service.

The FS used to have a magnificent building near Enterprise where you could go for information (the one time I got info there it was actually pretty accurate). But that building burned down last year and I haven't heard any updates about it since.

The Wallowa Mountains Visitor Center moved into another building in Enterprise after the fire. The information center still exists. As for the quality of information, that's another story. Anything I've asked about has been more often than not incomplete or woefully out of date. Or, as the OP put it, the Visitor Center folks are "clueless." IMHO, recent trip reports here and on nwhikers.net are a far better source. I'll remember Gina at the Marina next time!
May your trails be crooked, winding, lonesome, dangerous, leading to the most amazing view.--E.Abbey
Top

The site of the old Forest Service visitor center in Enterprise was quickly "enhanced" to become a Best Western motel. The guests there now get the prime views from the top of that knoll.