In early August, I tried to do a traverse of the Bird Mtn complex in the Indian Heaven Wilderness. While the weather was good, most of the trails were still covered with snow and I was only able to climb Bird itself. Last Wednesday, I explored the southern end of the wilderness but, although all the snow was now gone, the weather was crummy. Yesterday, I decided to try the Bird Mtn adventure again – only this time the weather was perfect and there was no snow (and not too many bugs either). It was 40F when I left the Placid Lake TH, which probably accounted for why most of the notorious Indian Heaven mosquitos were not in evidence. It was a short hike on Trail 29 to Placid Lake, 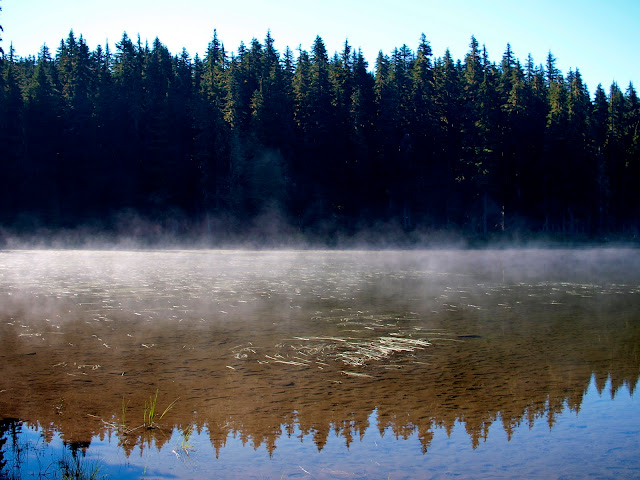 and then on to the small unnamed lake at around 4700’. Last Aug 3rd, this lake was still covered with snow and ice. 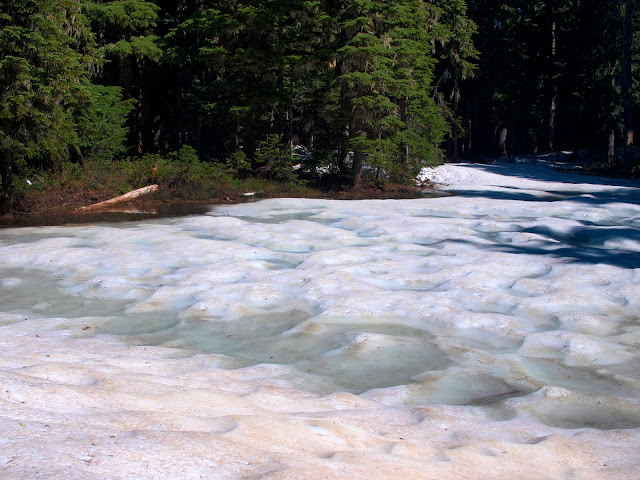 Yesterday only a small fringe of snow remained along its eastern bank. 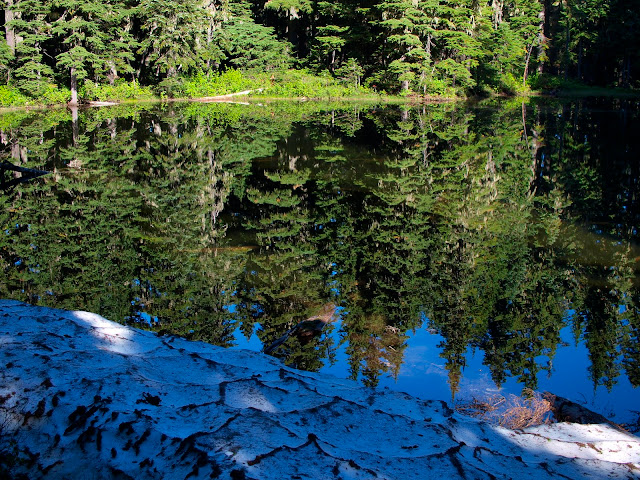 About 3 mi in, the trail crosses a meadow, which looked like this just a month ago, 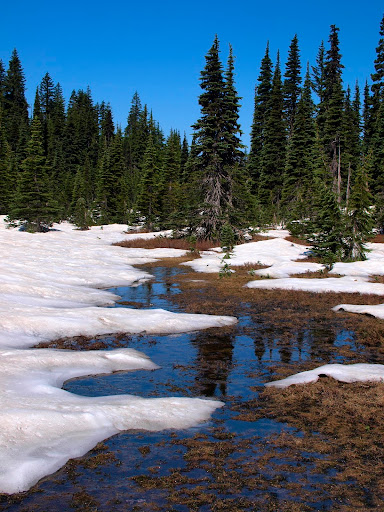 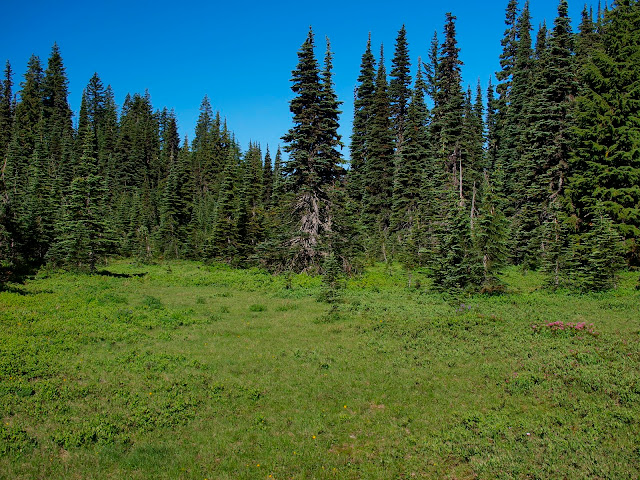 Unfortunately, while the huckleberry bushes are finally free to grow, they got a real late start and may not have time to develop berries before Fall. Just beyond the meadow, Trail 29 junctions with the PCT – a junction which was packed with snow in early August, 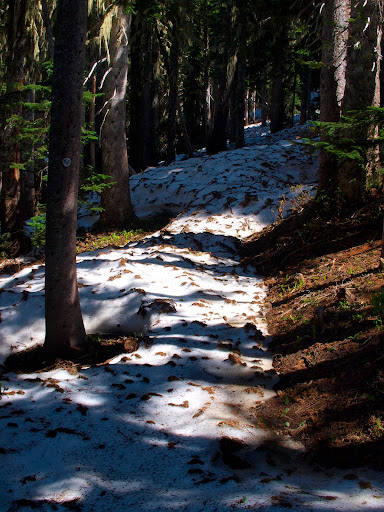 but is now snow-free. 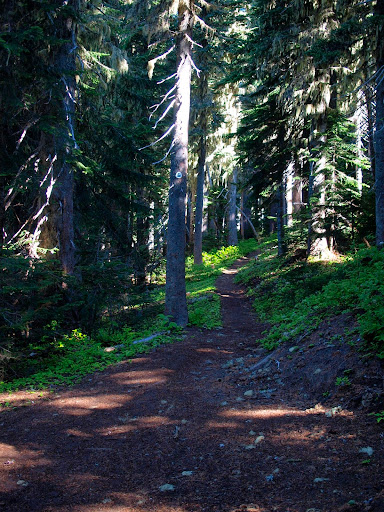 None of the trails I was on today had anything more than a very few patches of snow – none of which were any impediment to travel. I turned S on the PCT for a short distance to where it traverses a boulder field and started climbing there up toward Pt 5518, the southern high point in the Bird Mtn chain. Along the way, I happened on a little melt-water lake that probably exists only in years (like this one) when there’s a big snowfall that lingers into the summer months. 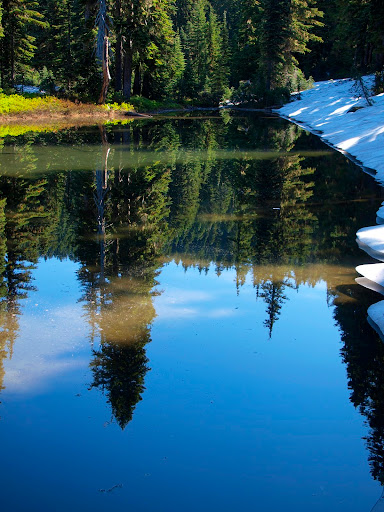 From the top of Pt 5518, I had a great view (this was a hike with A LOT of views) of St. Helens and the SE flanks of Bird Mtn itself. The only times during the hike when I was really bothered by bugs was on this and the other high points – down in the forest, a little DEET kept every flying/biting nuisance at bay. 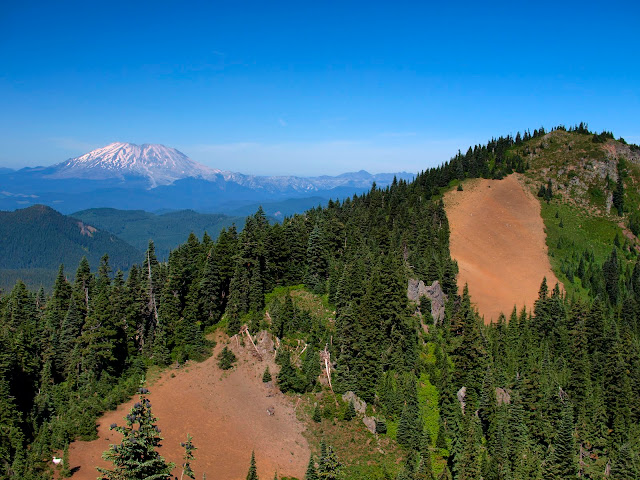 I continued N on the ridge to Bird Mtn, catching a view of Adams from just below Bird’s summit. 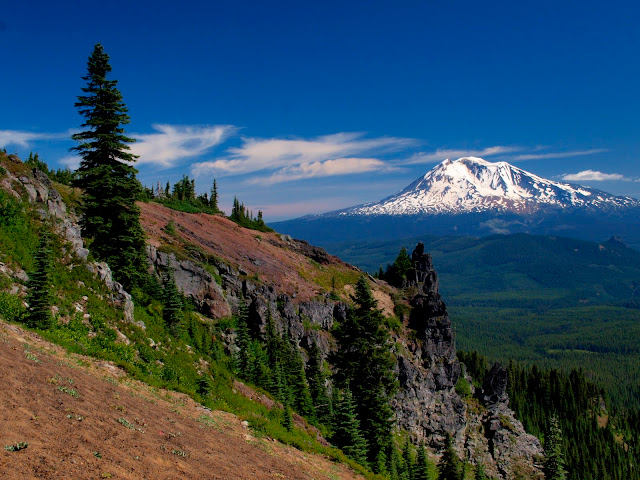 From the top of Bird (where the mosquitos were fierce despite the DEET), I could see Hood to the S, 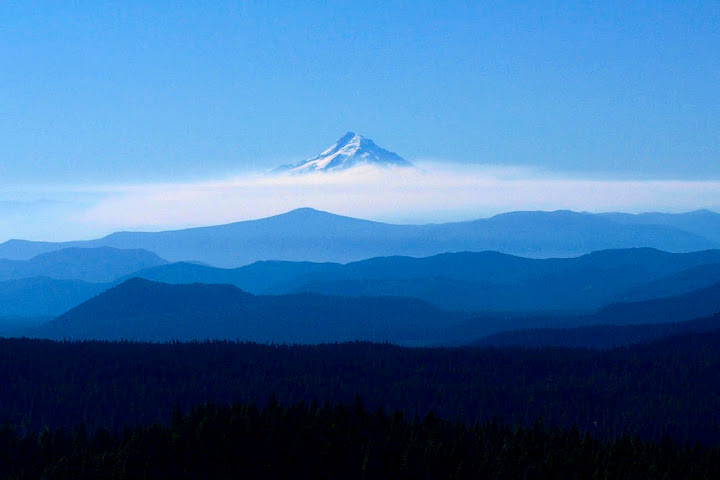 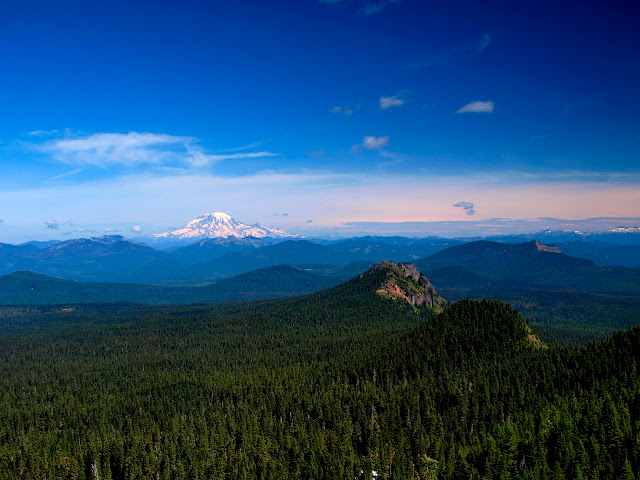 As I headed N across the saddle between Bird and Pt 5688, I got an aerial view of Wood Lake with St. Helens in the background. 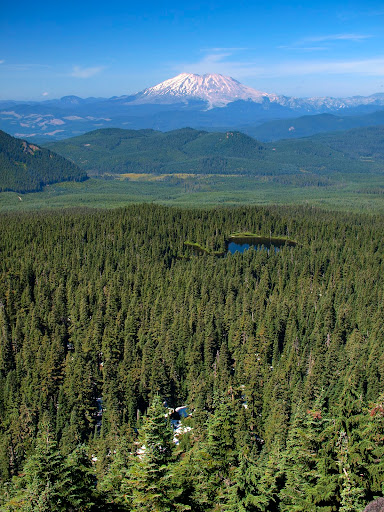 I generally followed the ridge, plus a collection of game and use(?) trails, to traverse over to Pt 5568. This traverse is described on SummitPost but, judging from the lack of obvious use trails or the usual human flotsam, isn’t done very often. From atop Pt 5568, I could see Sawtooth Mtn (it’s high point is on the far right) and Rainier. 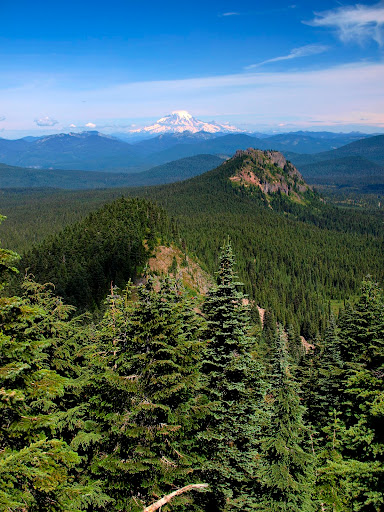 The descent down the N ridge of Pt 5568 to Trail 108 was the messiest part of this whole hike – a lot of thrashing and sliding through wet brush. But fortunately it was a short section and I was soon headed N on the PCT to its junction with Trail 107. This trail seems to have different alignment in the real world then that shown on my maps but I stayed on it until it started traversing the W side of the mountain and came parallel to the summit. There was a very clear use trail at that point which went straight up through the brush (useful here for handholds) to the summit ridge. Sawtooth is a series of aretes separated by chasms of varying widths. This use trail took me to a place where most of these chasms could be circumvented. The “trail” emerges on the ridge right at the base of the pinnacle (the speck in this photo right at the skyline is actually a buzzard - several of which started circling me as I climbed - odd feeling to be a potential item on some other creature's menu 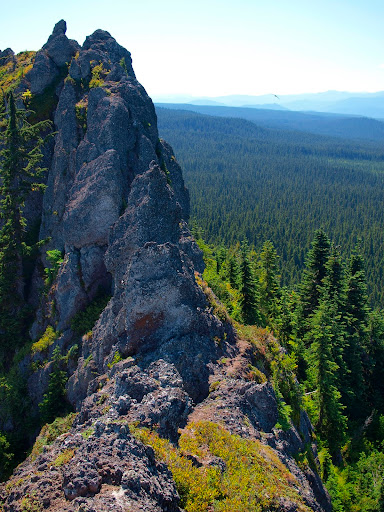 From there, it was up a narrow ledge, 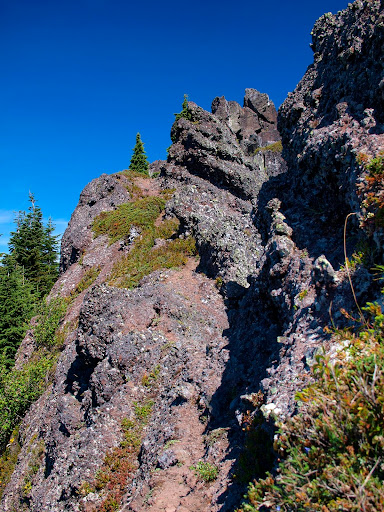 to the base of the summit pinnacles, 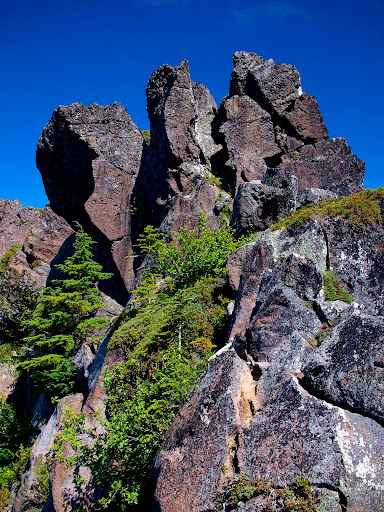 which I surmounted by traversing a knife edge, climbing a chimney, stepping across one of those chasms, and finally climbing another face. Doing all this was a lot of fun (for me) but there is a lot of exposure (i.e., you’re crawling along the edges of cliffs) on this route, as well as some loose gravel (and perhaps a loose handhold too). IMO - This is a route only for folks who are really comfortable on exposed 3rd class rock. From the summit, I could look S over the various aretes that make up Sawtooth to Bird Mtn in the distance, 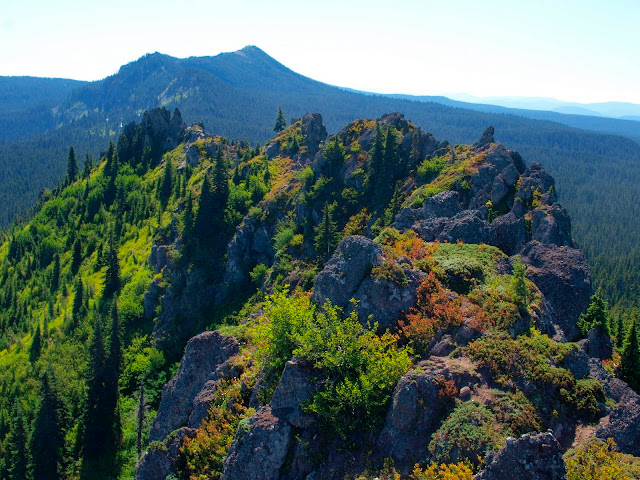 and E for yet another view of Adams. 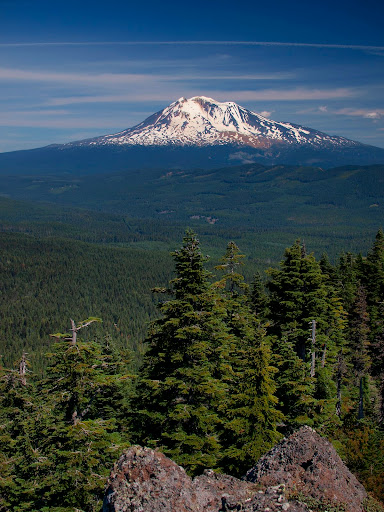 Getting off Sawtooth was just as exciting as climbing up it but soon I was back on Trail 107, and then the PCT, which I followed to Trail 29, and hence back to the TH. A great, almost perfect (no huckleberries) day of hiking, with bluebird weather, minimal insect life, and a little climbing for piquancy. Indian Heaven is a great place, but with a short season between no bugs and first snow, so now’s the time to enjoy it! Trip stats: 13.2 mi, 3000’ total gain. 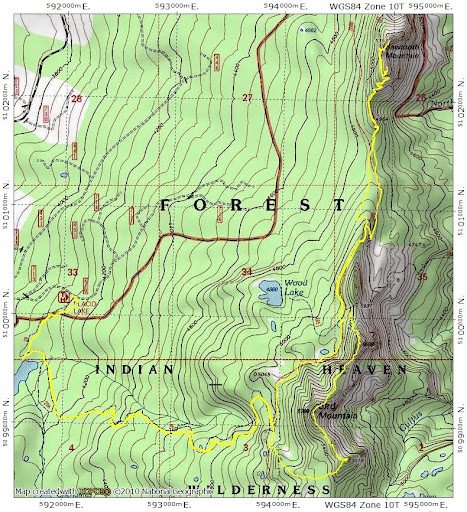 That's great that you remembered where you were standing when you took the Aug 3rd pictures for the 30-day comparison. I was wondering how much snow was lingering in Indian Heaven. Without driving up there and donning my boots, I'm betting the trail between Cultus Lake and Wapiki Overlook still has some deep drifts. But, at least the lower meadows will be hikeable until the (do I dare to say it) return of the snow this winter (oh, god, he said it).

Looking forward to some red leaves in a month.

BTW, nice picturtes from the Sawtooth area. Damn, work keeps getting in the way of mid-week hiking.
Top

What a contrast between this time and the last! That scramble looks like more than I'd tackle. But the views you had were a great reward.
Jim's Hikes