I had hoped to get out of town for a few days, but events conspired to allow me a staycation instead. So I decided to work on those hikes on my “to do” list that involve 2 or more hours driving from Portland. Last Monday’s hike was Stagman Ridge on the SW side of Adams. It’s the last hike in Bond’s Take a Hike Portland, but I haven’t seen it in many other guidebooks. Driving out from Portland, I went through a patch of drizzle, but the skies were clear at the TH. From there, I followed the Stagman Ridge trail (#12) almost directly along the ridge toward Adams. This – and all the trails I followed this day – were in OK to good shape and some even showed signs of recent maintenance (i.e., removal of blowdowns). At 5200’, I came to the first meadow and my first wide-screen view of Adams. Wow! 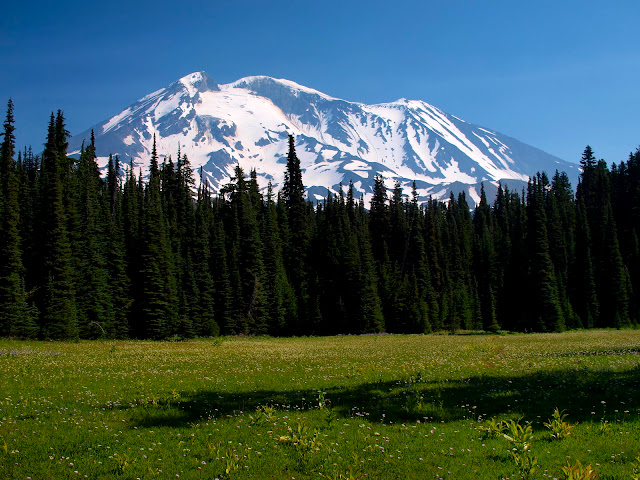 Just beyond the meadow, the #12 trail makes a sharp turn to the left, and there’s a little sign to the right. 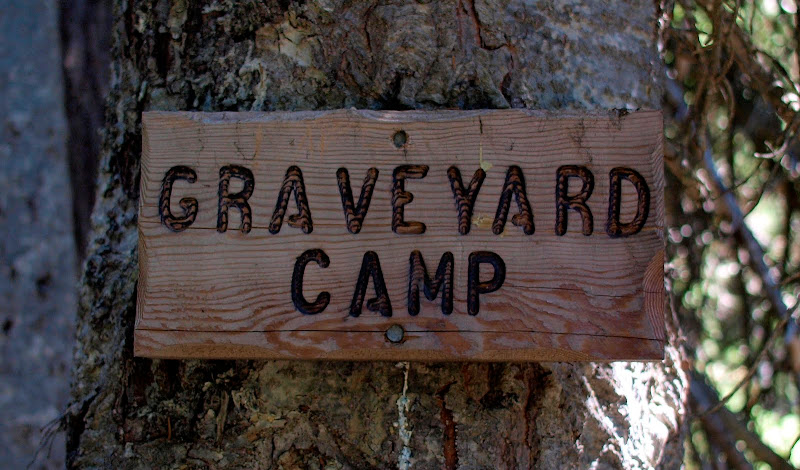 Somewhat ominous and not particularly accurate, since it marks the start of a good use trail over to Lookingglass Lake and not to any (readily evident) resting place of the departed. This use trail contours E at around 5400’, crossing several small streams, 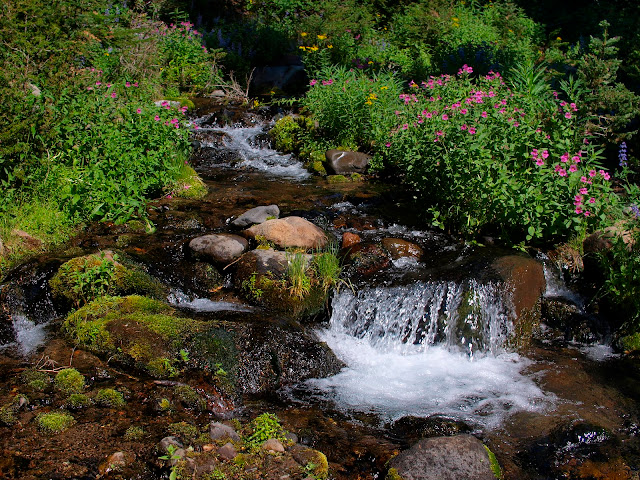 then crosses a large stream (2 logs were in place to make a bridge), 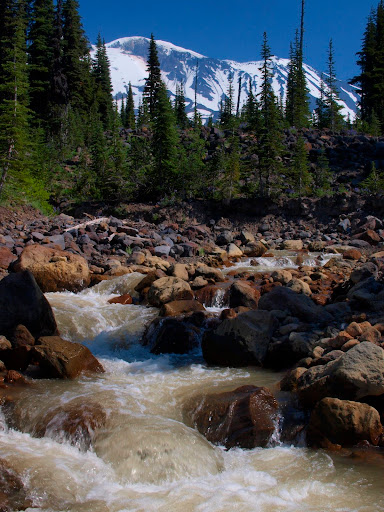 before taking you to a side trail down to Lookingglass Lake. There are good campsites on either side of the lake and it would make a first-rate destination for an overnight backpack. 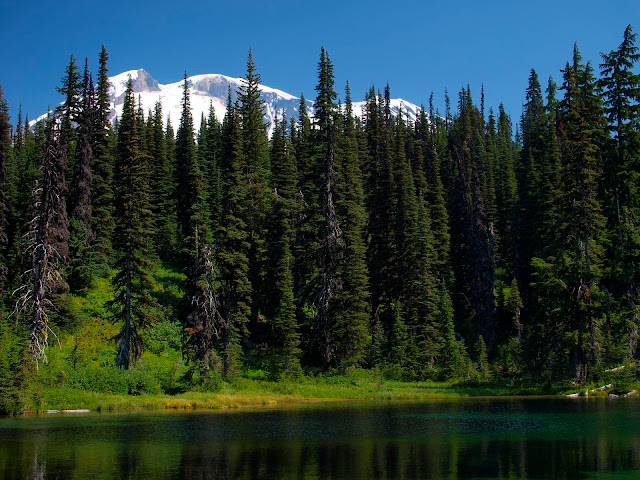 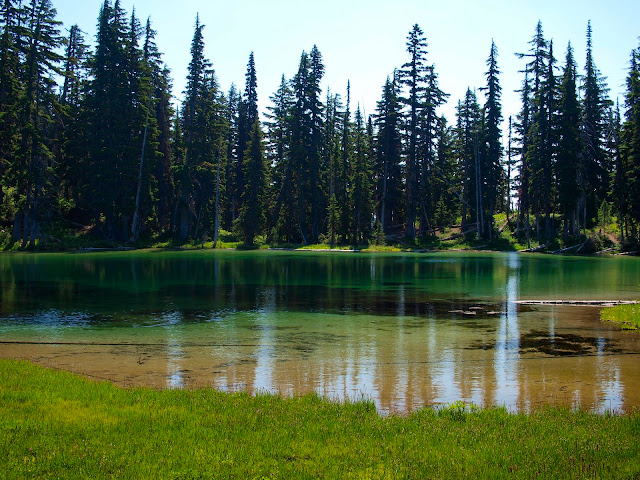 And, yes, there are fish in the lake. 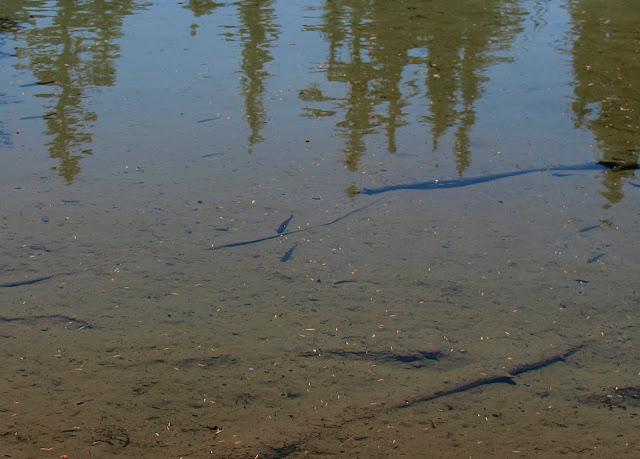 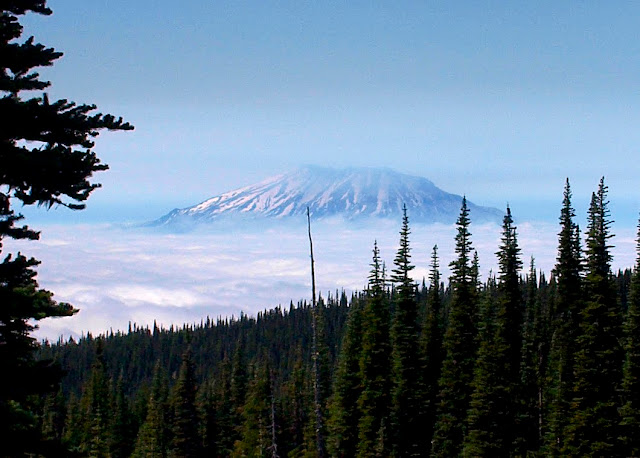 The RTM trail took me around a ridge with a good view of that roiling cloud layer trying to force its way into the interior.

That was followed shortly by Horseshoe Meadow and another grand view of Adams. 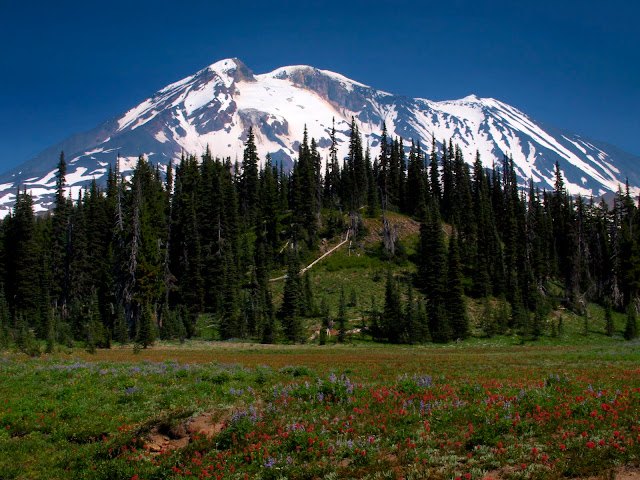 Just past the meadow, I followed a short section of the PCT (2000) back to the Stagman Ridge trail and hence to the TH. There is a short, steep, loose, dusty section of trail #12 between the PCT junction and the “Graveyard Camp” sign that I avoided having to climb up by doing a counter-clockwise loop. All told, a short loop (11.4 mi, 2400’ (including detour to the lake)) but a great way to see the W side of Adams up close. 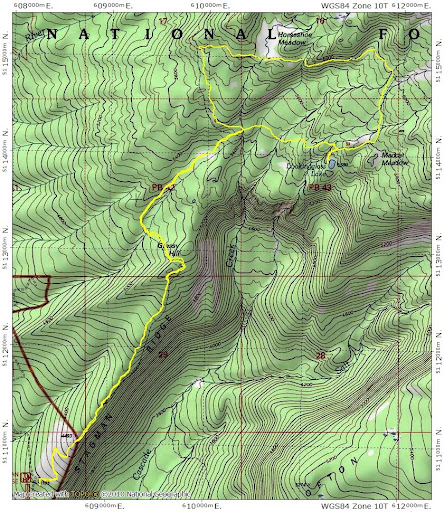 Did you see any other hikers out that day? I've always suspected that the area immediately around Mt Adams get less use than other locations. Do you think that's true?

Your pictures were great, especially the last one - wow is right!
Jim's Hikes

Did you see any other hikers out that day? I've always suspected that the area immediately around Mt Adams get less use than other locations. Do you think that's true?

Your pictures were great, especially the last one - wow is right!

All the blue sky is about 50 mi E of Portland. I saw 2 dayhikers and 2 backpackers the whole day. Lots of campsites but no campers. I'd say you're right - most folks (and I was once one of them) seem more interested in climbing Adams than hiking its lower slopes. They're missing some great scenery!
Top

You didn't mention snow or bugs, so I guess there wasn't too much of either.

As to the number of people, maybe you can see why many of us go there instead of more popular places. The west side of Adams seems to be particularly neglected. The climbers go to the southern side, and hikers seem to prefer the north.
Top

drm wrote:You didn't mention snow or bugs, so I guess there wasn't too much of either.

As to the number of people, maybe you can see why many of us go there instead of more popular places. The west side of Adams seems to be particularly neglected. The climbers go to the southern side, and hikers seem to prefer the north.

No snow and few bugs. The worst mosquitos were where the #12 trail crosses a creek just above 5000'. There weren't any to speak of higher up or at the lake. I've climbed Adams via the North Ridge - we were the only people camping on the N side and on the ridge but we met 75+ people on the summit! Two different mountains people-wise.
Top

Thank you for this great information. I'm taking a friend from France backpacking tomorrow for two nights and that is exactly where I was planning on going. Glad to hear the bugs aren't terrible!
Top

The north side doesn't get many climbers, but I think that Killen Creek Meadows area (and Killen Ck TH) is the most popular spot for hikers on Mt. Adams. I've never seen any of the three westside trailheads have nearly as many cars or people, even the PCT (except for elk hunting season in Nov).

But the west side definitely has the best lakes for camping. Lookingglass is the main one, but 5387 and Crystal are even better, though both are a bit off the official trails.
Top

I hiked up from the PCT a couple years ago. A few people parked at trailhead right at road 23. You can hike up the PCT to the Stagman trail junction. Several people camped at Lookingglass Lake. There were campsites along trail 9A up to the round-the-mountain trail. There's a stream along trail 9A.

That is a great area to go to.
Top

Nothing in the field guide either....

One web site had the following, but I couldn't find spur road #120 on any map. The directions sound pretty good but I'd prefer to be able to find it on a map before heading out.

the "axle busting" scared me off so I went to the trailhead for PCT right on rd 23 and walked up PCT which is about the same distance, views, etc.
Top
Post Reply
16 posts