Sunday My 9-year old daughter and I took the Vista trail towards Cairn basin. The plan was to do the loop through Eden park, but as usual, once we reached timberline the lure of Barrett Spur was too great. So we slogged up the ridge, over snow fields here and there.

[Mt. Hood and Barrett Spur from the junction of the Vista Ridge and Timberline trails.] 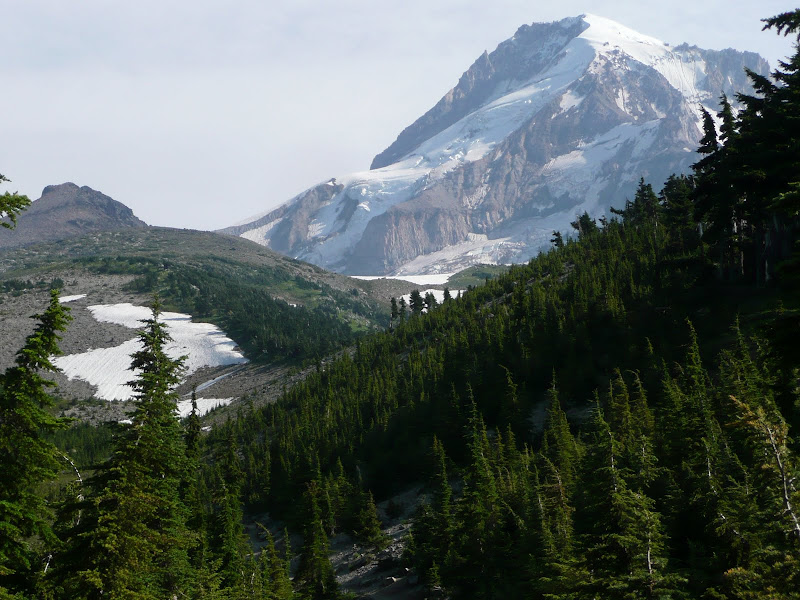 As we started up the ridge we began to smell wood smoke. At first I thought it was just a campfire, but as it got stronger I began to realize that didn't make sense and started to get a little nervous. As we neared the top of the ridge we could begin to see a column of smoke rising to the east, towards Elk Cove. As we gained height we could see that the fire was well beyond Elk Cove, down in the Coe river canyon. About this time a helicopter came flying over from the west and circled the smoke column. Suddenly we saw it dump liquid on the fire. The helicopter spent the next few hours dumping water, circling over to a nearby lake (Lawrance?) to scoop up the water. Kinda cool to see such an operation in action, and made me feel a bit safer being up there. Has Anybody heard any details about this fire?

We met a large group of boys on their way down from Barrett Spur who were sliding down the big snow field towards Dollar lake.

We made it to the "Shoulder" just below Barrett Spur, but didn't have the legs or time to get all the way up Barrett. Instead we made our way down through the snow fields and flower meadows towards Cairn Basin. I didn't get us over far enough to reach the shelter by the time we hit the Timberline trail, but we were just as happy to have a slightly shorter path home.

[The view from the "shoulder" below Barrett Spur.] 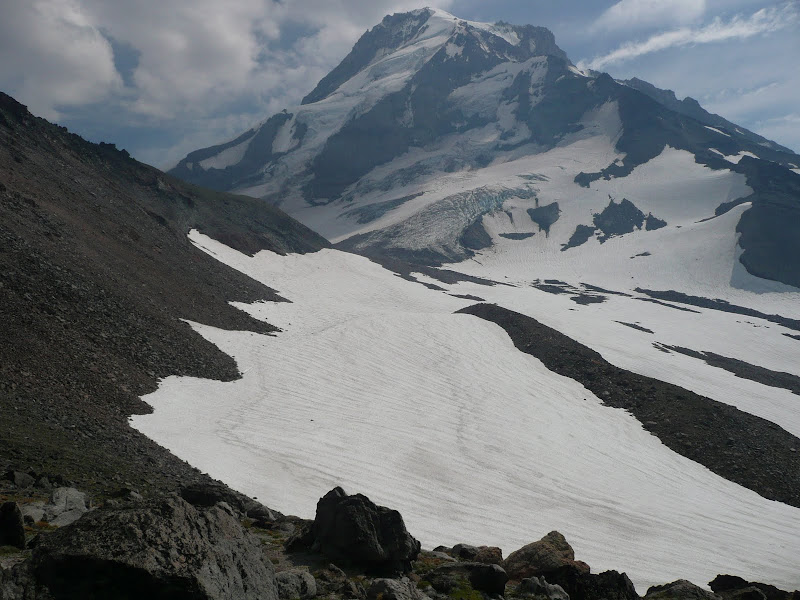 [Another view, from the snow fields below Barrett Spur.] 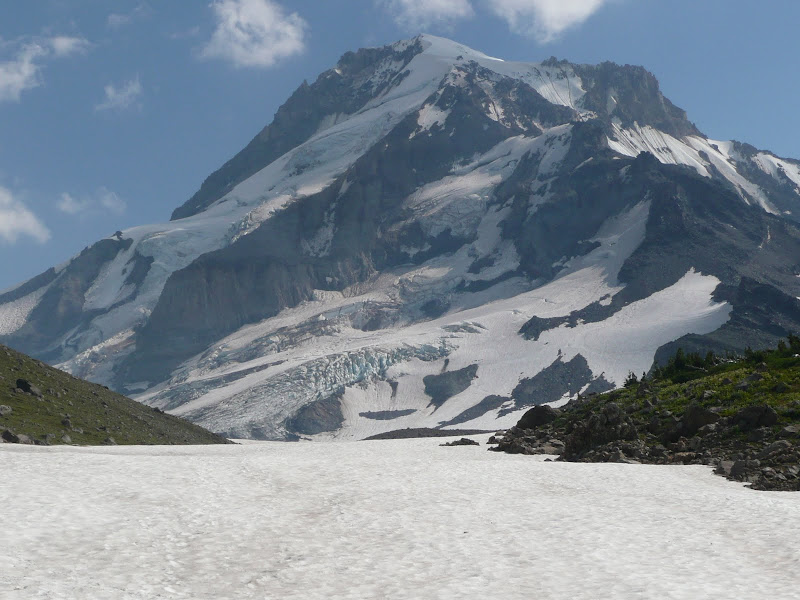 The avalanche lilies were past at the lower elevations, but it must have been an impressive display along the Vista Ridge trail a few weeks ago. Besides the avalanche lilies there were the usual suspects: Lupine, Indian paintbrush, Old man of the mtn, even some purple shooting stars along the first marshy creek crossing on the timberline trail towards Elk Cove. (Sadly, no flower photos this time.)

A beautiful day to be on the mountain!
Top

Too bad on the "Dollar Lake" name for the fire -- confusing, to say the least, as the fire isn't all that close to Dollar Lake. Reminds me of the "Gnarl Fire", which never was all that close to Gnarl Ridge, and ended up burning west, toward the Eliot Branch. They must pull these names from a map without much knowledge of the terrain.

Interesting...we went up there Saturday morning and saw some smoke around 2pm. We set up camp at Dollar Lake and went to check out the wildflowers at Elk Cove. We saw a fire crew of about 10 guys who said the fire was only about 1-acre in size and they were trying to get to it. That night we smelled smoke now and then as the winds shifted. We spent sunday hiking Barrett Spur and then came down around 2pm - about that time they said they were evacuating Dollar Lake...it's too bad the 1-acre turned into 1,500. Seems like it did not really have to get so large. Hope those beautiful meadows in Elk Cove are not scorched.
Top

Just happens I got this shot of the fire on Monday morning from the trail between Wahtum Lake and Indian Springs. I wondered how worried I needed to be. Smelling smoke after dark gave me pause. How fast do those things travel, anyway?

They must pull these names from a map without much knowledge of the terrain.

In one of the fire lookout books I read recently, they said they name a fire after the nearest landmark to the start of the blaze. Sometimes the fire isn’t quite where they thought it was, but by the time they realize that the fire has already been named.
Top

I hope we get an update on this soon. We were hoping to get up to Dollar Lake this summer and kept putting it off and hoped to get up there in September. I hope there is a report on Dollar Lake/Elk Cove, etc soon - I, too, hope it is not scorched!! When I heard the name of the fire my heart sank. Glad it was not as close as it sounded but with reports that it got bigger I am a little worried.
Top

I called 911 but someone had already reported it

Later, there were a couple airplanes flying over it checking it out.
Top

Been following this as the house my dad grew up in on Cooper Spur is potentially endangered (though the closer Gnarl Ridge fire actually helped in that some of the forest near Elliot creek canyon is already burned pretty good). I've got a little post synopsis (including links to the inciweb and NWCC reports) on my blog here, http://www.mmh.seesart.com/?p=2376 but for you map heads I've tried to put some features on the inciweb map.

Reading the latest reports -
Basically its too smokey to update the perimeter maps, but the fire has reached Cathedral Ridge. Most of the spread occurred on Saturday due to high winds, with about a 2 mile spread judging from the maps.

Exactly what has burned cannot be pinpointed yet, and fire perimeter maps always include unburned areas as well. The earlier perimeter maps go right up to the snowfields.


Splintercat wrote:Too bad on the "Dollar Lake" name for the fire -- confusing, to say the least, as the fire isn't all that close to Dollar Lake.

Impossible to say for sure yet with all the smoke, but Dollar Lake could easily have burned over. If not, then fire was close.

There is no short answer for this one. This fire apparently traveled about 2 miles on Saturday. In extreme conditions, which can occur in Eastern Oregon, you can't run fast enough to get away. Many firefighters have died over the years in this way. Some have even been caught in vehicles.

There likely were stand replacement burns on Saturday. At other times according to official reports "active fire behavior is expected with possible short crown runs." What this means is that much of the time its ground fire, with only limited killing of trees. The typical result is a patchy mix of dead and still green trees with the shrub layer burnt away. The picture below shows how it looks a year after the fire.