Wednesday I planned on a loop involving Elk Meadows, Gnarl Ridge, and Umbrella Falls but, thanks to a thunderstorm fake-out, only managed half a loop. Starting from the Elk Meadows TH, I negotiated the artfully constructed bridge over Newton Creek, 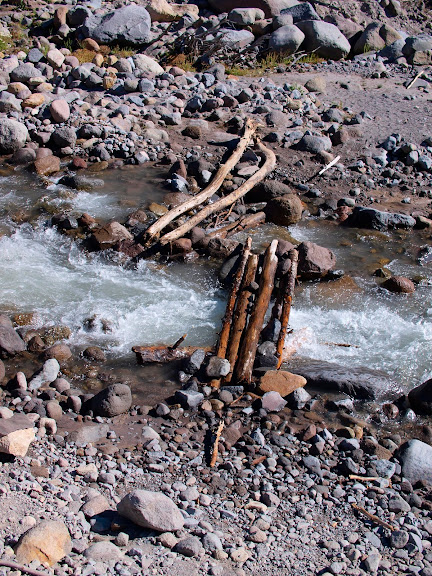 then headed up to Gnarl Ridge. Along the way, the trail was flanked by fields of lupines in full bloom - the flower fragrance was intensely pleasant. 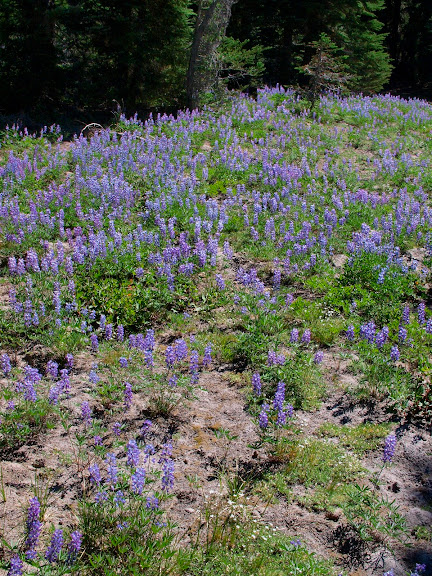 I continued to the top of Lemberson Butte where there was a clear view of Adams and Rainier (just peaking over the ridge to the left), 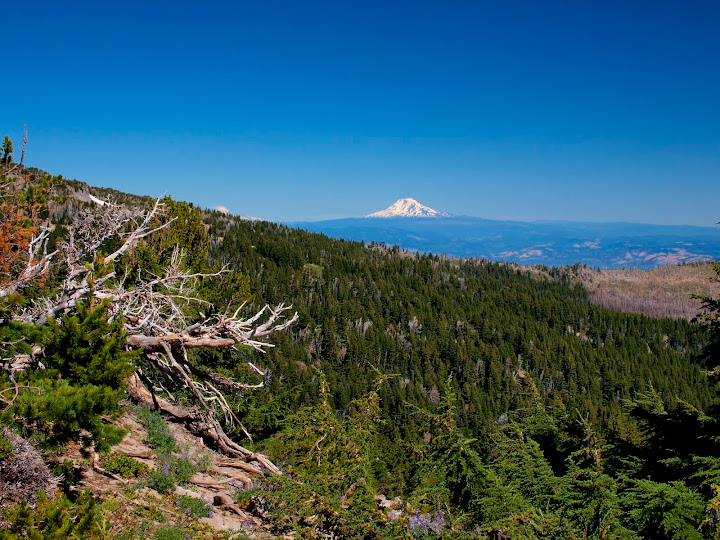 Jefferson, with the Three Sisters beyond, 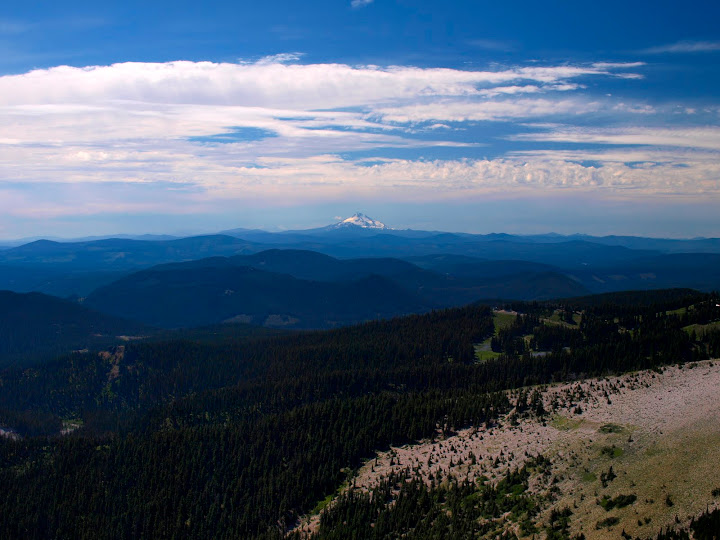 and, of course, Hood. 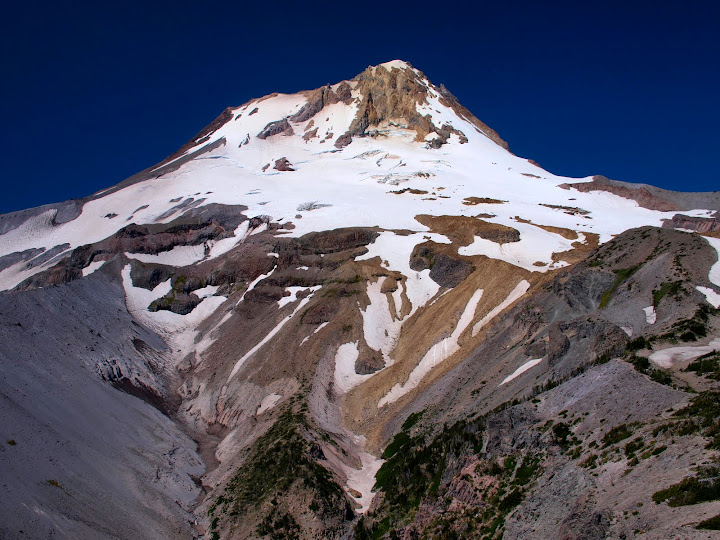 Then it was back down the Timberline Trail to the higher crossing of Newton Creek where, thankfully, another bridge had been assembled. 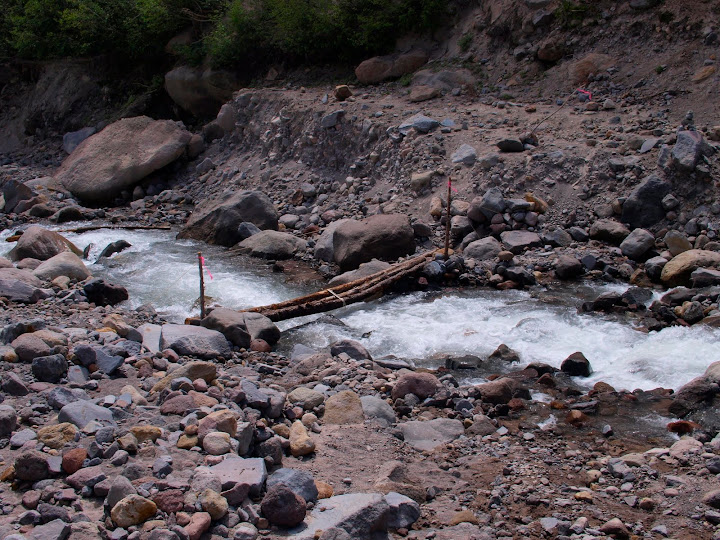 From here, I had a nice view up the creek toward Hood, 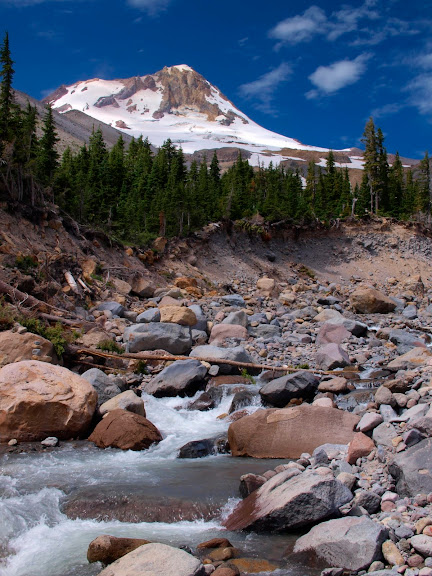 and of the face of Lemberson Butte. 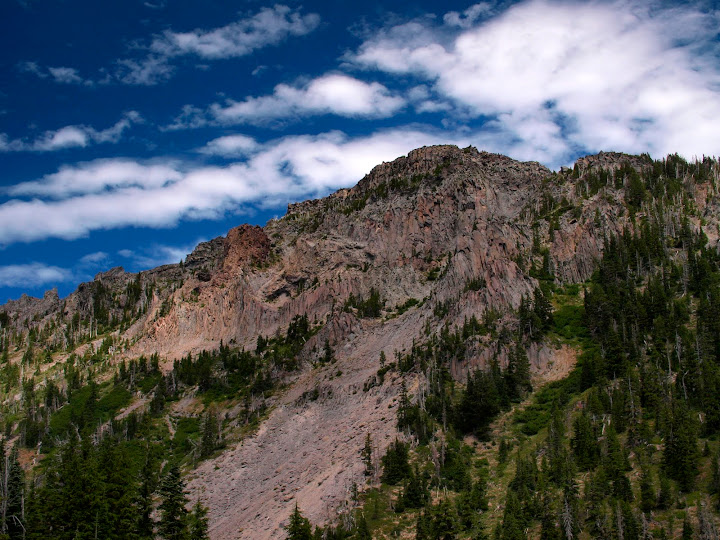 Up to this point it had been clear and sunny, but as I continued on the Timberline toward the Umbrella Falls trail, clouds - dark, foreboding clouds - started to roll-in and it was soon overcast and threatening. I still had 5 mi to go and didn’t fancy doing those miles in a thunderstorm, so I reversed course and descended the Newton Ck trail. From that trail, I could look down on Newton Creek wending its way through large chunks of snow several feet thick. Looks like a head-start on next season’s snow. 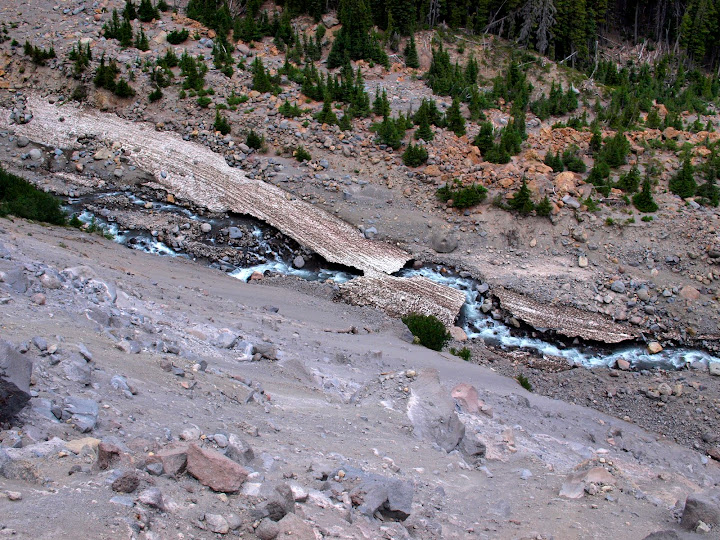 After that it was a straight shot back to the TH. Of course, the clouds, which had looked so awesome at the top of the Newton Ck trail, were completely gone by the bottom and I got back to the car in full sunlight. Another weather bait-and-switch. Still, it was a reliably classic hike, on good trail, with great views. 11 mi RT, 2500’ gain. 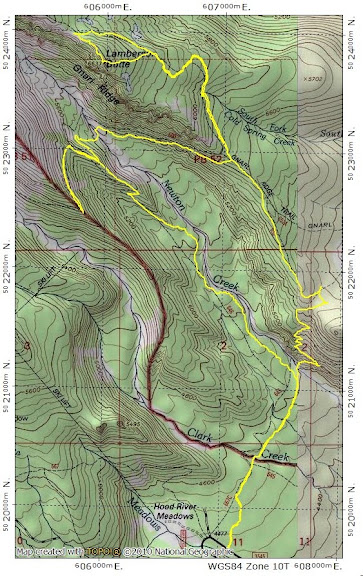 Ha! Well, a lot of us got turned back by the cloud fake on Wednesday, Van -- but there's no harm in playing it safe. We'd all be gloating over our wisdom had we watched a giant electrical storm unfold on the mountain behind us!

Good to see a couple user bridges in place on Newton Creek. It's one of my pet peeves about the Timberline Trail, but I'm an advocate of placing "disposable" log bridges at all of the crossings every season, as part of basic maintenance of the trail. Drives me nuts that we tolerate people getting hurt (or killed, in at least one tragic case) over this point.

I'm planning to do this loop soon -- though I'll do your shorter version using the Newton trail... that's plenty long for me!

I hiked up to Gnarl Ridge the day before you. The lupine was great! Luckily I had good weather and no thunderstorms to be found (but it was windy). Thanks for sharing all your wonderful photos.
"Life is a daring adventure, or nothing" - Helen Keller