After our Bachelor Mountain hike, we headed to neighboring Coffin Mountain (map) to hike it as well. We hit the trail at 4:00.

The trail immediately charges up the hill. At first the trail starts out in the forest, but soon enough we started having views of nearby Bachelor Mountain (where we had just hiked an hour before) and Mt. Jefferson. 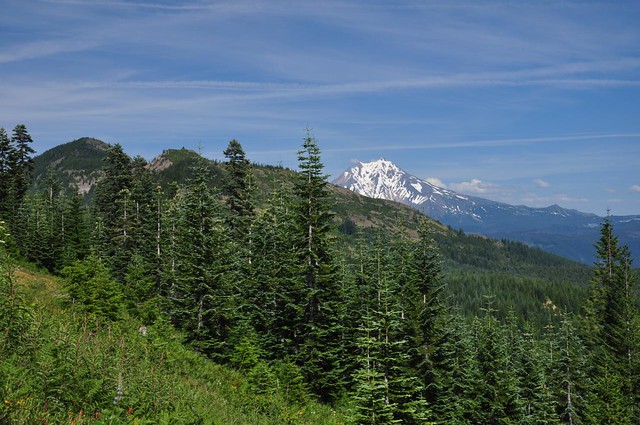 The trail levels out a little bit before climbing steeply again through the expansive meadows on the slopes of Coffin Mountain. The trail makes a few switchbacks in the meadows on its way up. And up. And up. 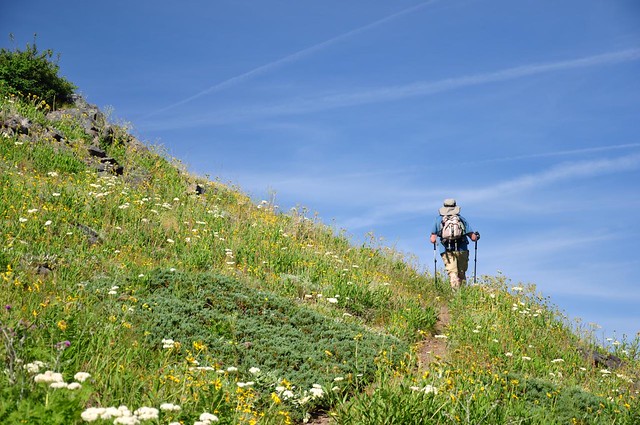 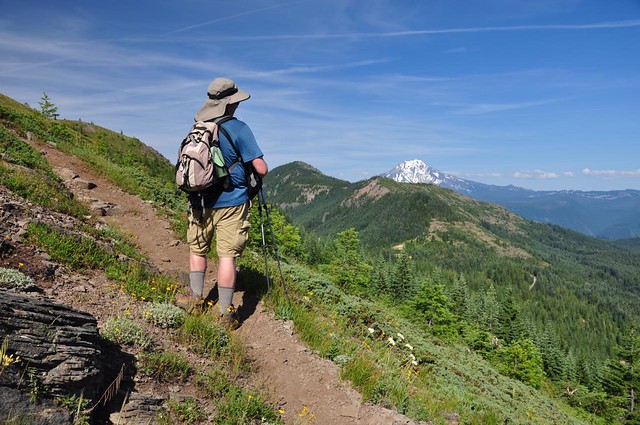 The enormous meadows that we hiked through were chock full of beargrass. Unfortunately, most it was WELL past peak. I bet it looked AWESOME about 2-3 weeks ago. Oh well. 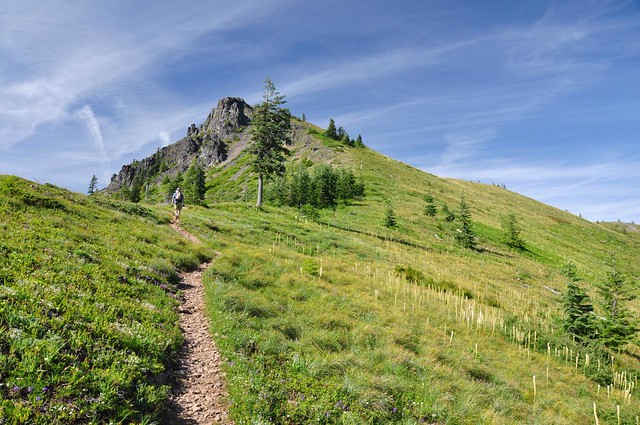 (That is not the summit in the photo above, by the way. You can't actually see the summit until the very end of the hike.) 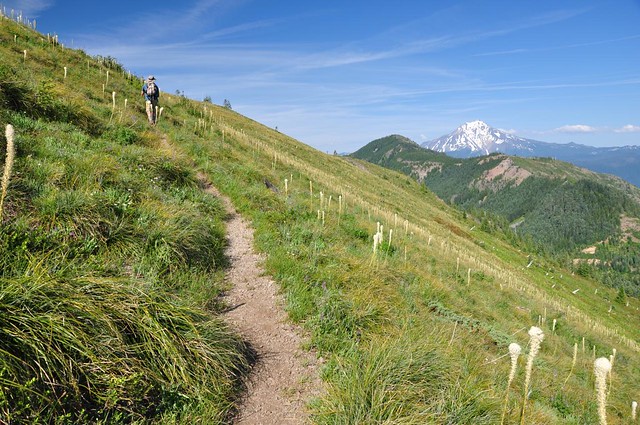 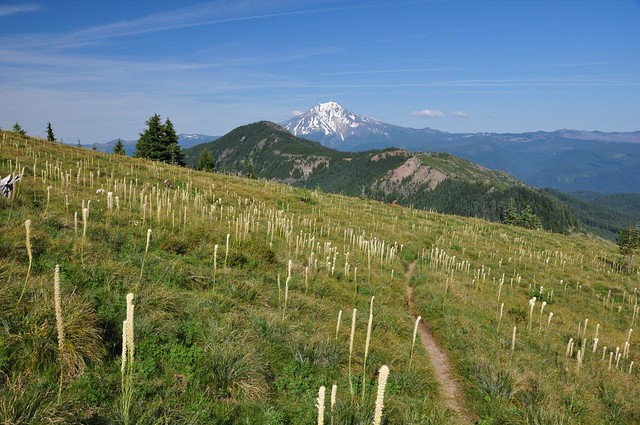 For most of the hike, unfortunately, we could hear what sounded like logging operations less than a mile away. Sounds of heavy equipment and backup-beeping drifted through the forest to our ears. NOT the kinds of sounds you want to hear on such a pretty hike.

After a really tough and tiring climb (remember that we had already hiked up one peak that day), the trail finally leveled out on top of the mountain and we had a short hike through the trees before we emerged from the forest to finally see the summit and the lookout station there. 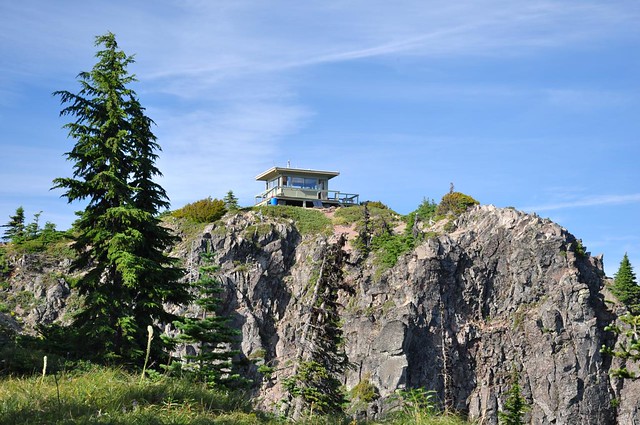 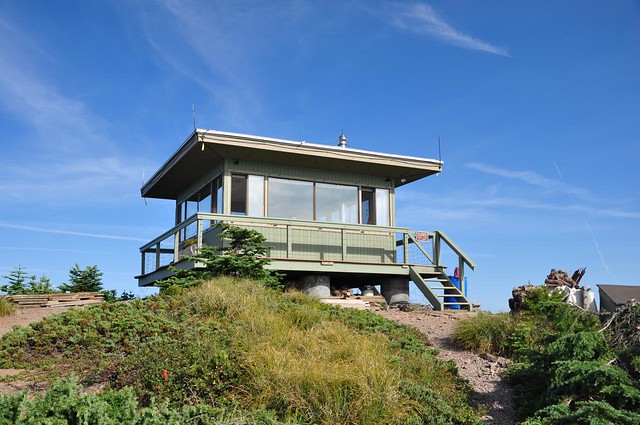 The lookout is closed to visitors, but the nice woman who worked there came out on the catwalk and spoke to us. She said the fire crew had packed her gear in on July 9, with just a few patches of snow on the ground! Considering the late snowmelt this year and the relatively high elevation of the summit (5700') I thought she had only been there a few weeks, not a month+! Her lookout, by the way, had a feature I've never seen on a lookout before: a nice little deck with a mini picnic table overlooking the view of Mt. Jefferson. Now THAT would be a great place to eat one's breakfast!

She has pretty awesome views in nearly all directions from that lookout, of course. Bachelor Mountain and Mt. Jefferson: 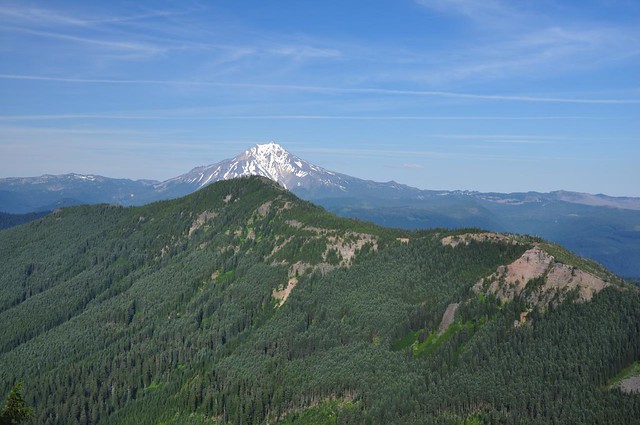 Mt. Washington and the Three Sisters: 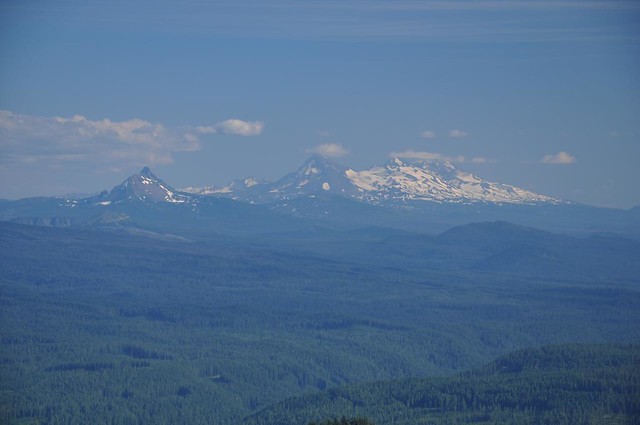 The "other summit" of Coffin Mountain where the radio towers are: 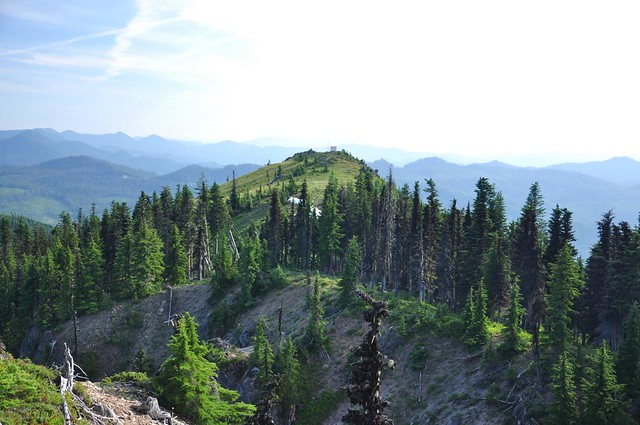 Although I don't have a photo of it, we could also see the huge swath of burned forest from the B&B fire a few years back. Wow, that fire burned a lot of acreage.

Not far from the lookout station is a place that the woman referred to as "the point." We went out there and admired the lovely evening views for awhile before heading back down. 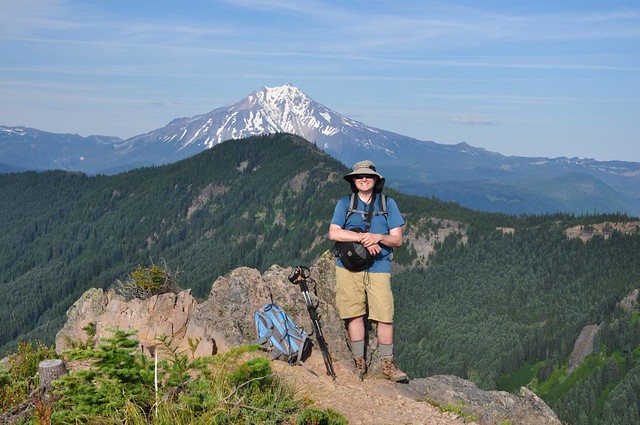 On the way back down we came across this lovely spot after finding the geocache: 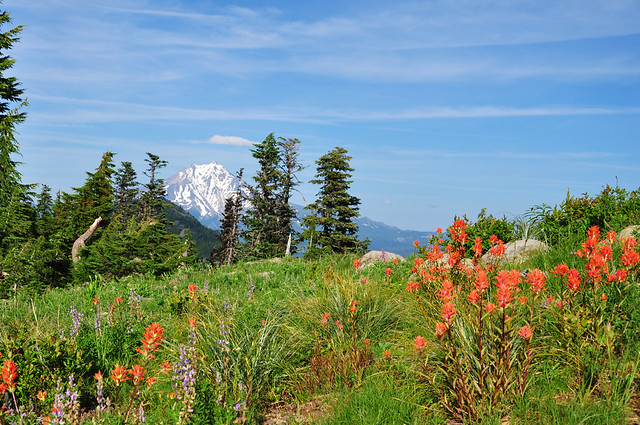 We were back to car at 7:00 and then headed back to the campground for a well-deserved veggie burger dinner and cold beers. Just like Bachelor Mountain, I HIGHLY recommend this hike. Beautiful meadows and fantastic views! It's a little tough to do both peaks in one day, but it's definitely doable.
Top

And do you have to pay?

Last time I was up there a couple of years ago, the lookout lady had been working that station for something like 15 years. I'm guessing it might still be the same one. What a neat place to put in a workday! That beargrass display looks like it was a stunner last month, wow!!

Last time I was up there a couple of years ago, the lookout lady had been working that station for something like 15 years. I'm guessing it might still be the same one.

Based on the way she was talking, it sounded like she'd been doing this gig many summers, so it probably is the same woman.


That beargrass display looks like it was a stunner last month, wow!!

Yeah, I think this was a good year for beargrass in this location. Since it goes in three-year cycles, I guess we'll have to wait until 2014 to see it like that again on Coffin Mountain!
Top

By the way, I wondered about the origins of Coffin Mountain’s name. According to Oregon Geographic Names, this mountain "appears as a flat top box" when viewed from Detroit Lake. It didn't look like that from where we were, so now I'm curious what it looks like from the other side.
Top
Post Reply
5 posts • Page 1 of 1