Greg and I headed out to the Detroit Lake area on Friday and grabbed a campsite at the Riverside Campground, about 20 minutes south of Detroit. Marion Forks CG was all full, and Riverside now accepts reservations so most of those sites were taken as well. We managed to snag the last spot by the river, where we set up our tent before heading off to hike.

Our first stop was Bachelor Mountain (map). From the trailhead we had a nice view of neighboring Coffin Mountain, which was our next hike. 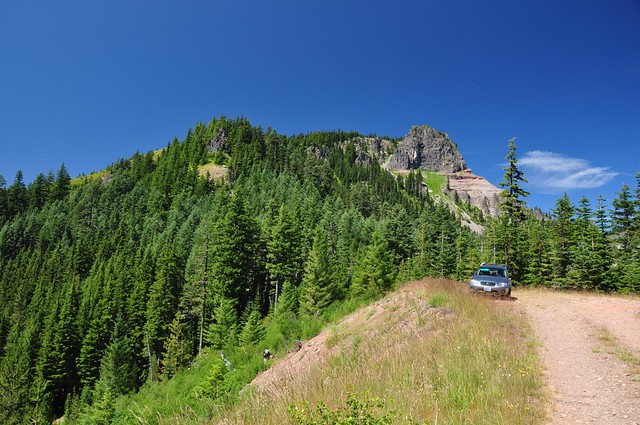 We hit the trail about 12:45 under gorgeous blue skies. Less than a mile into the hike we hit a meadow with views of the Three Sisters (no photo) and the meadows on Coffin Mountain. 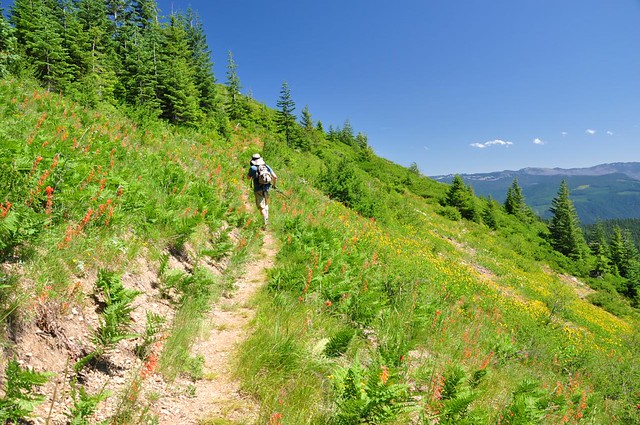 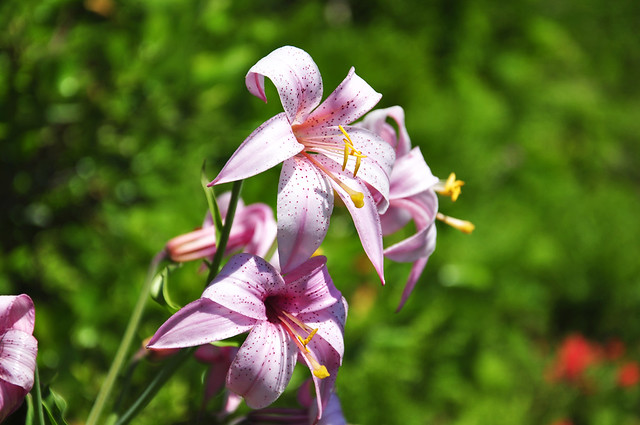 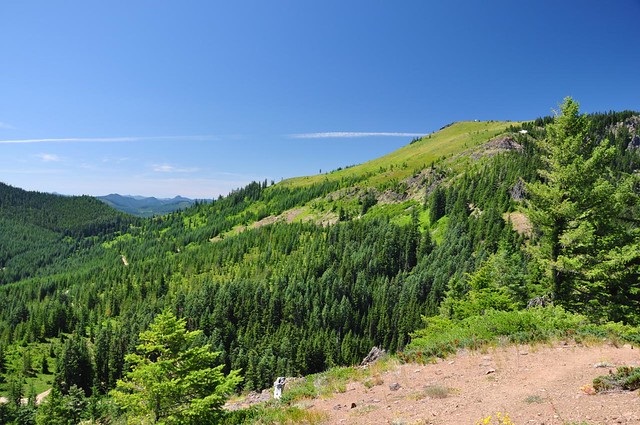 We ate lunch in the shade at the edge of the meadow, watching hummingbirds and butterflies frolic amongst the wildflowers, before moving on. The trail made a long traverse along the side of the hill, and we started getting a peek at Mt. Jefferson. 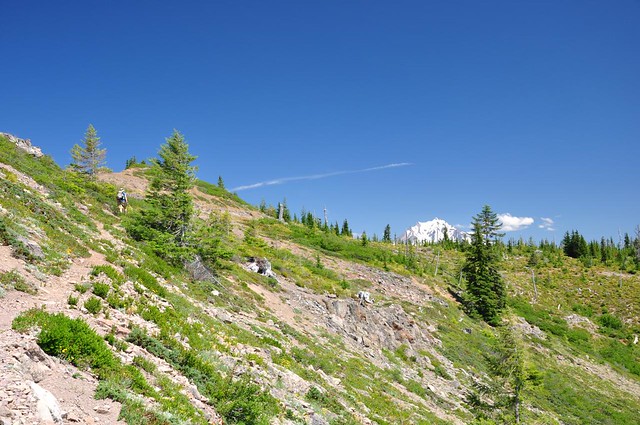 Zoomed-in on Greg far ahead of me. 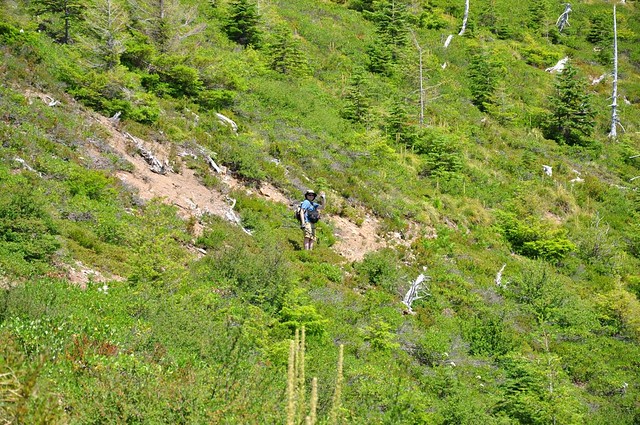 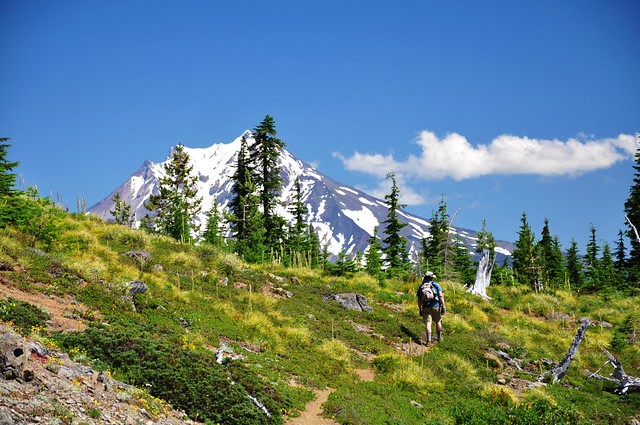 And then we views of the peak of Bachelor Mountain, which we hadn't been able to see before. 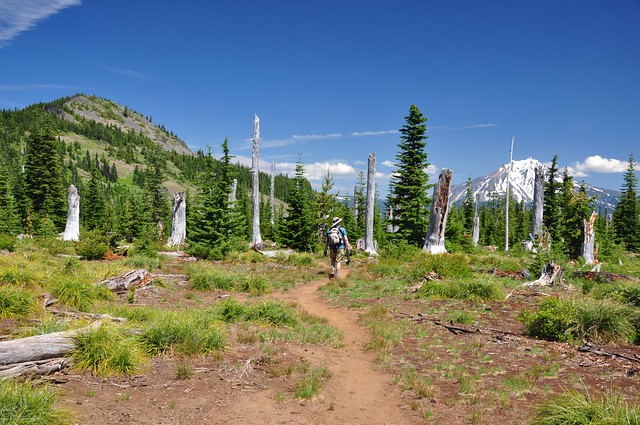 After a flat stretch through the old Buck Mountain Burn from 1967, we re-entered the forest where there was a junction. Straight ahead goes to Bruno Meadows (has anyone ever been there?), but we headed left up to the peak, climbing up first through forest and then along rocky slopes. The views got better and better. 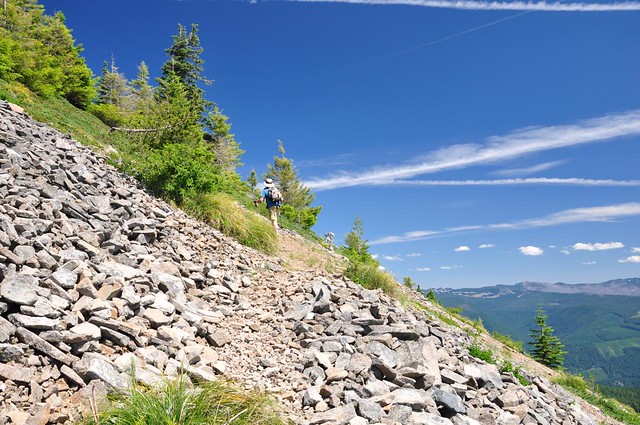 And then we were at the top, with AMAZING views all around us. Mt. Washington and The Three Sisters, along with flat, snowy Tam McArthur Rim (to the left of Mt. Washington): 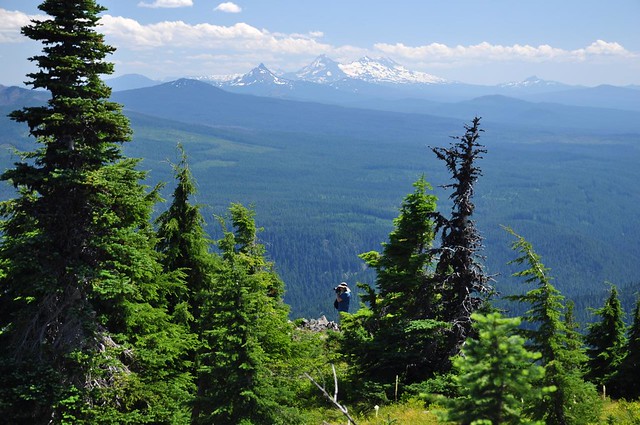 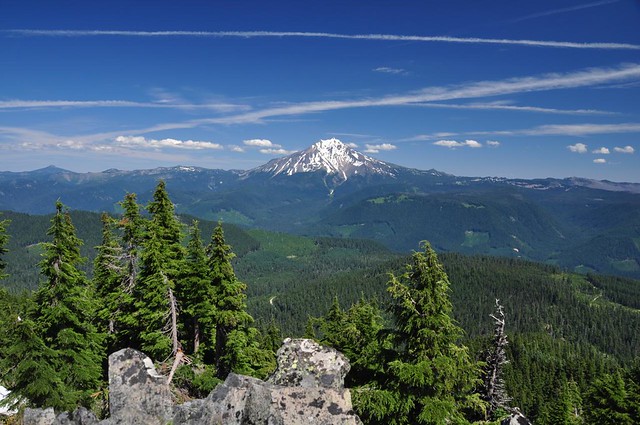 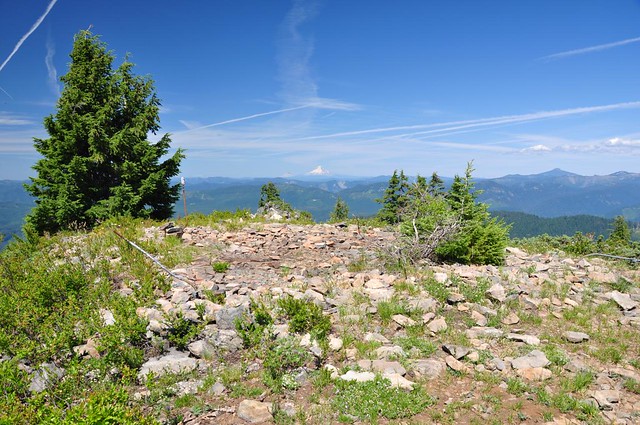 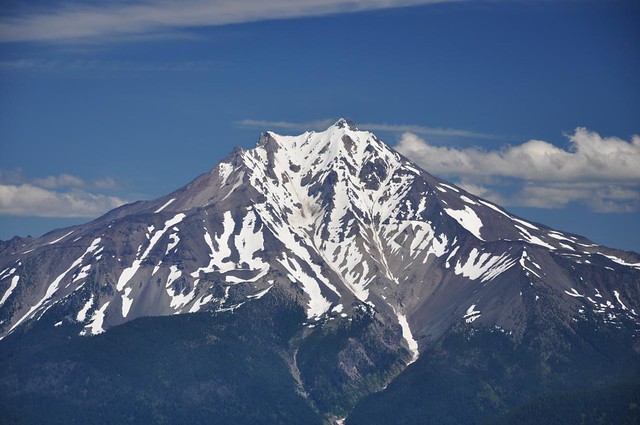 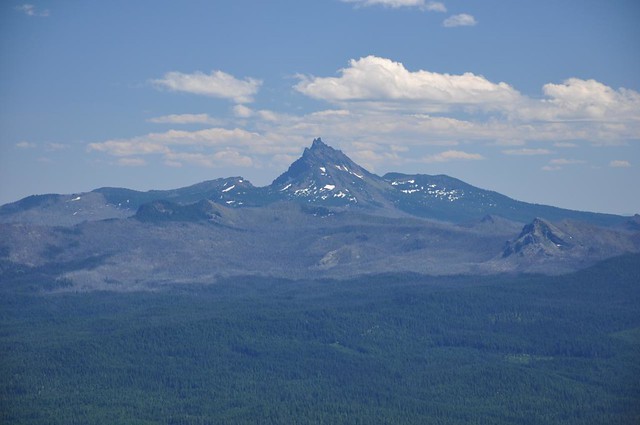 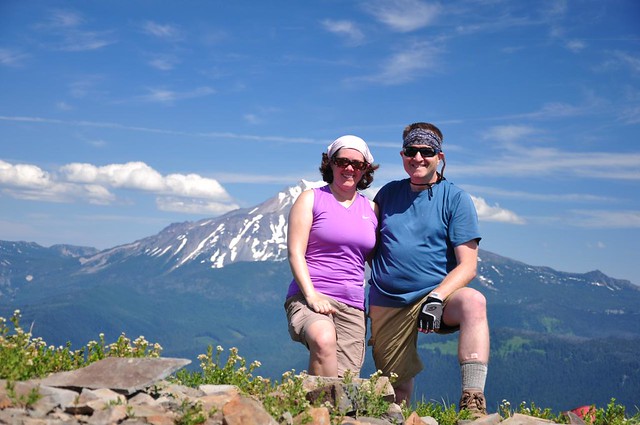 We could also see Coffin Mountain next door, and the little lookout at the top. It's hard to see here, but it's on the rocky bit on the right side of the photo. 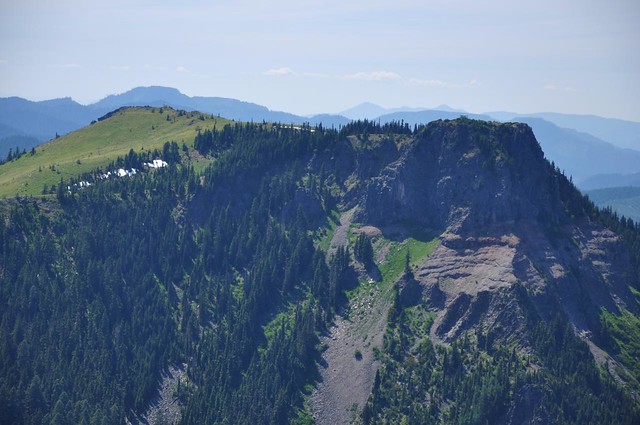 We found the geocache, which had only been logged twice in the last 12 months, the previous log before that being cfm's in 2006! No geocachers visited here in four years?? They don't know what they're missing!

With Coffin Mountain still on the day's agenda, we reluctantly headed back down. On the way down the mosquitoes made their presence known, and before the bug spray came out I got several bites that kept me awake with the most horrible itching on Saturday and Sunday nights.

We were back to the car at 3:50 and off to Coffin Mountain (TR coming soon!). I HIGHLY recommend the Bachelor Mountain hike. It's not very long and the views are pretty spectacular!
Top

One of my favorites in the Detroit district. The last time I was there a few years ago, my dad and I surprised a herd of elk at the junction of the spur up to the summit. Pretty amazing (and noisy!) experience. What a great view from the top! Beautiful photos.

Excellent trip report on a beautiful area and beautiful photos as usual.... but I just have to comment, is it just me, or does it seem like Jeffersons timberline is melted out? (think Jeff Park)

Wow! We drove through Riverside on Friday night looking for camping and wound up at Marion Forks. Shame we didn't run into you.

Great photos, I've wanted to go back to that area for awhile. The Old Cascades are awesome!
Author of Off the Beaten Trail, 101 Hikes in the Majestic Mount Jefferson Region and PDX Hiking 365. Website: www.offthebeatentrailpdx.com
Top

Wow! Look at all that Skyrocket Gilia (I think) in the second photo! Nice!

Ditto on the Old Cascades, Matt. I miss living in Corvallis for that very reason -- I just don't get down to those old haunts anymore.

That's a darn nice hike, thanks for the memories!
Top


Koda wrote:Excellent trip report on a beautiful area and beautiful photos as usual.... but I just have to comment, is it just me, or does it seem like Jeffersons timberline is melted out? (think Jeff Park)

markesc wrote:That's the s/sw side of the mt.....I'd wait until mid sept for Jeff park.


Koda wrote:Excellent trip report on a beautiful area and beautiful photos as usual.... but I just have to comment, is it just me, or does it seem like Jeffersons timberline is melted out? (think Jeff Park)

I couldn't see much of Jefferson Park from the summit of Bear Point last Saturday but I could see enough to observe that there's still a bunch of snow in there. You can see for yourself in my photo below. There's still snow everywhere on Park Ridge and there looks to be large patches of snow in the basin that holds Jefferson Park (at the end of the ridge, just below the mountain):

I'd say you should be golden after Labor Day.
Author of Off the Beaten Trail, 101 Hikes in the Majestic Mount Jefferson Region and PDX Hiking 365. Website: www.offthebeatentrailpdx.com
Top

Sorry to resurrect this old thread, but I feel I have to.

I hiked Bachelor Mountain from the Bruno Meadows trailhead yesterday. It was one of the most enjoyable, if at times frustrating, hikes I've done in the last three years!

After a day of camping at the fine Riverside campground 14 miles southeast of Detroit (get a riverside site, as not only is it gorgeous, but it'll drown out the Hwy. 22 traffic noise), I needed a nice little jaunt the next day.

Bruno Meadows Trail has serious beauty potential, but the overgrowth makes it a challenge. The trail is very difficult to find at times, as the plants are chest high in places. And the trail which is buried under foliage often contains impossible-to-see rocks, so be careful! Be sure to wear long pants!

Once you hit the three way Bruno Meadows/Bugaboo/Bachelor Mountain intersection, it gets a tad better.

The southern ridgeline along Bachelor Mountain has incredible views! It makes the difficult slog up the Bruno Meadows Trail worth it. And the trail to the summit is completely clear of overgrowth. The views from up top are unmatched for an Old Cascades peak.

I'm rather new here to this forum, and you'll notice I'll rarely post photos. I'm not a photo taking kinda guy. So, ...... no photos (thanks to the OP for the wonderful photos). But I highly recommend this if your ever in the Detroit area.
Top
Post Reply
10 posts • Page 1 of 1