Today’s planned hike was a loop trip to Bird and Sawtooth Mountains in the Indian Heaven Wilderness. Should have checked the SNOTEL sites first. After parking at the Placid Lake TH, I headed up Tr 29 toward the lake and encountered the first snow within the first quarter mile. 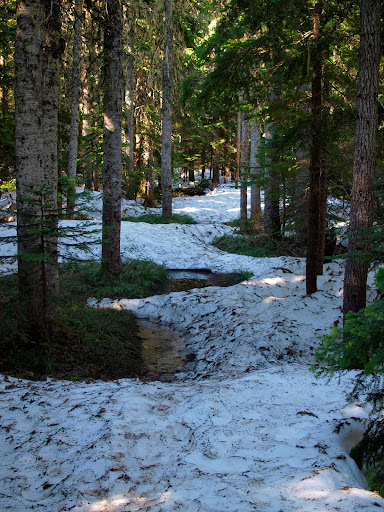 It wasn’t too bad, so I kept on to Placid Lake, which was just as flat as advertised. 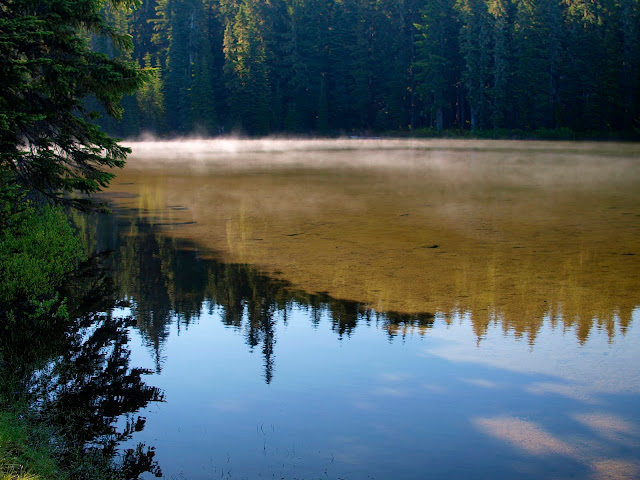 Trail 29 had patches of snow on it but could be easily followed until about 0.5 mi past its junction with the Chenamus Lake Trail. There, at about 4400’, the trail mostly disappeared under 2-6 feet of hardpacked snow. At 4720’, the trail skirts the S side of a small, unnamed lake, which was still almost completely covered with snow. 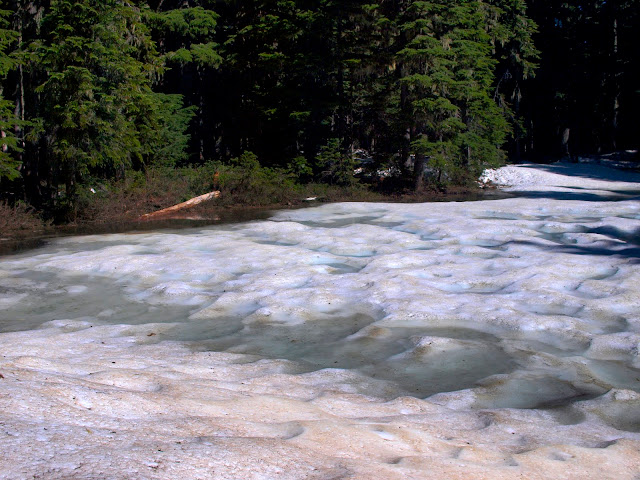 After that I’d catch glimpses of 2 foot sections of the trail but otherwise it was all snow. Just to show how fickle things can be, there were several long (100-200’) sections that were completely snow-free. 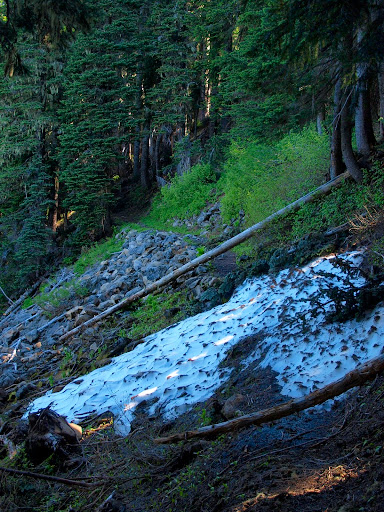 Just before it reaches the PCT, Trail 29 crosses some open meadows which, in a normal year, would be hosting lots of young huckleberry bushes but instead are still melting out. 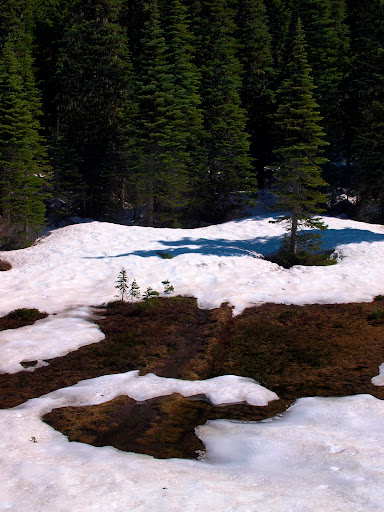 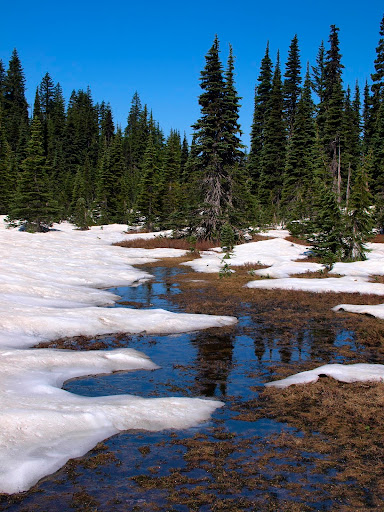 I eventually reached the PCT only to find that it was having some issues with snow as well. 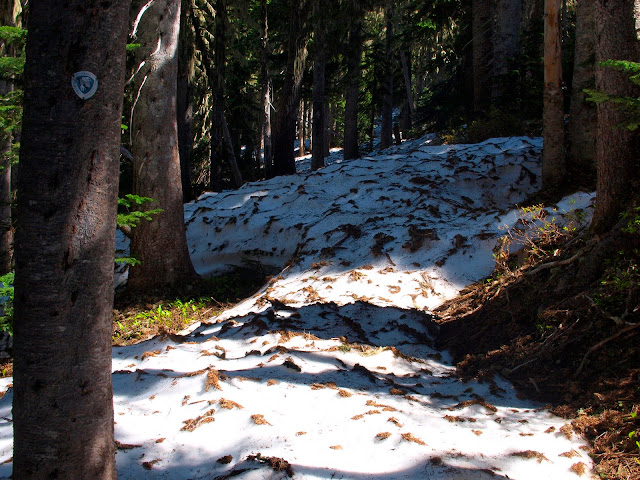 At this point I decided that a 15 mi loop trip - consisting of mostly route finding through snow - wasn’t going to work and instead climbed directly up to the summit of Bird Mtn, the 2nd highest point in the wilderness. Surprisingly, there was less snow the higher I climbed – even in the trees. Like Lemei Rock to the S, Bird Mtn offers great views in all directions. St Helens was hiding in the clouds, 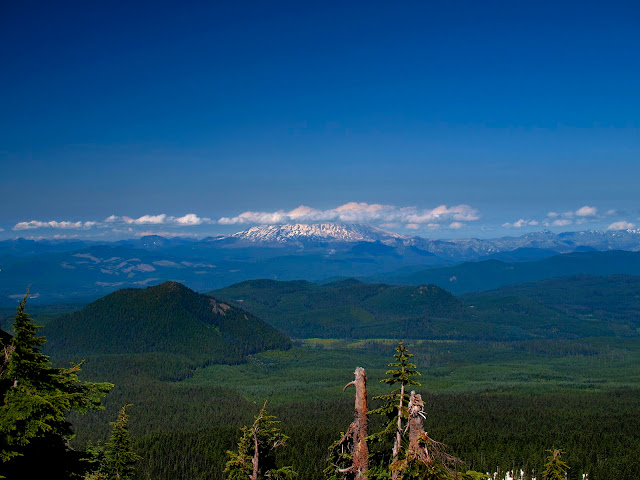 as was Rainier (Sawtooth Mtn is the rocky point near the middle of the picture), 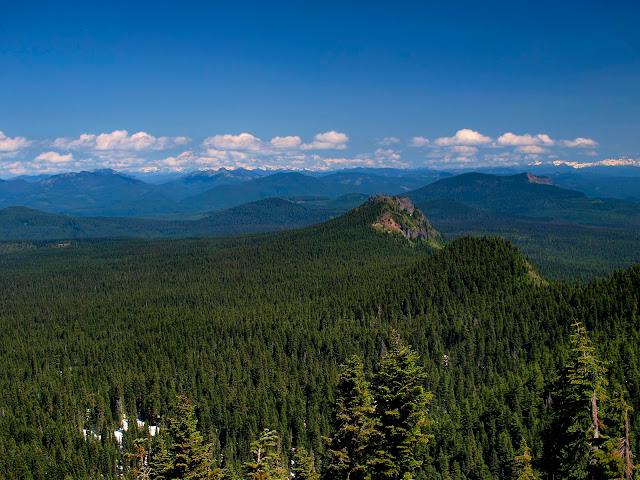 but Adams was fully exposed, 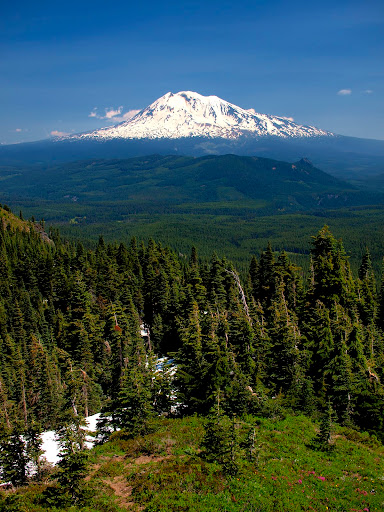 and Hood was visible over the ridge that connects Bird Mtn with its satellite peak (Pt 5618) to the S. 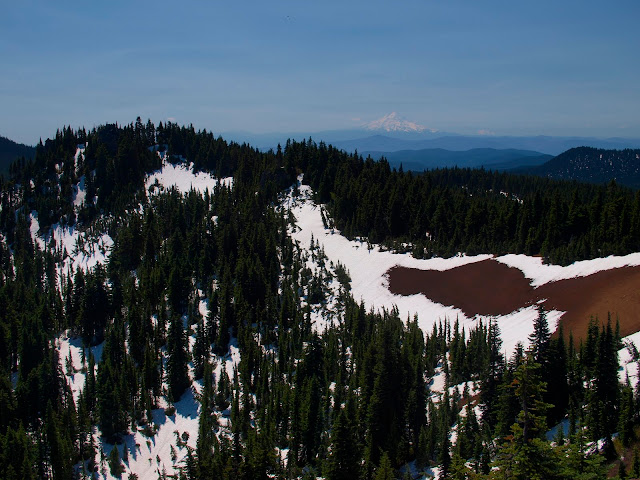 I headed back to the TH over meadows still covered with snow wondering how it might affect this year’s huckleberry crop? 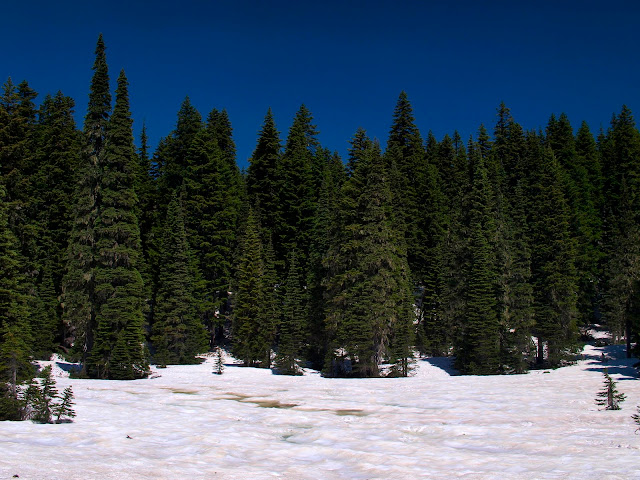 I could hear streams running but could rarely see them because of the snow. 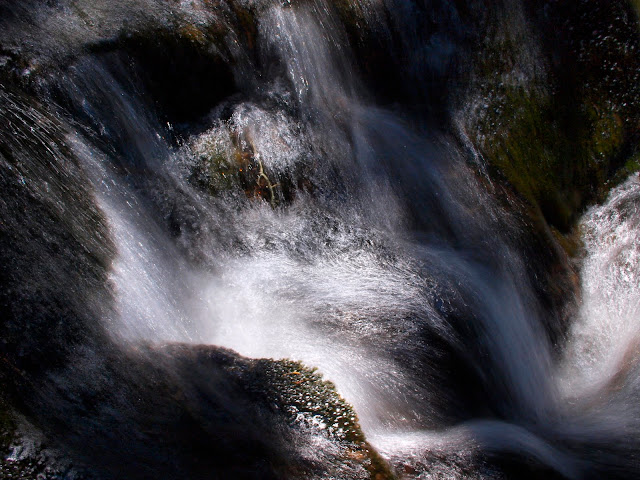 While the loop didn’t work out this time, the hike up Bird Mtn on such a nice, clear day was worth it. And, despite preparations including industrial strength DEET and a head net, I didn’t encounter a single mosquito the whole day! Some pesky flies yes, bloodsuckers no. I’ll try for the loop again in October assuming the snow has melted by then(?). 7.3 mi RT, 1700’ gain. 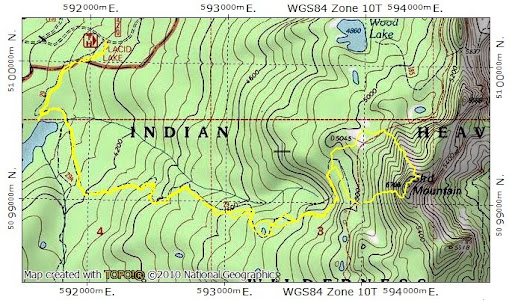 Bruce, thanks for the report and great photos. This snow is truly epic this year - I wonder how much of this the foliage can take and still survive the coming winter.

That's a lot of snow.

It finally starts to melt out!

I guess October will be the time there when mosquitoes hatch out?

Yo VM, thanx for the details. People (well,not many actually) barrage me with requests for snow-level real-time info for backpacking destinations. It's reports like yours that keep me abreast of our snowy Gifford this year. thanks, I appreciate your trevails...hahahahahaha......scott
Top

I can't believe how much snow there is in Indian Heaven still. Thanks for the update and great report.
Jim's Hikes

Flowers in November, Huckleberries next February!

Yes. A hike to Indian Heaven next February will feature packages of frozen huckleberries and freeze-dried mosquitos.

Don Nelsen wrote:Bruce, thanks for the report and great photos. This snow is truly epic this year - I wonder how much of this the foliage can take and still survive the coming winter.

I guess, over time, vegetation in this area has survived various shifts in the weather so I suppose it'll be OK in the long run. But I do wonder whether the open meadows will melt out and drain in time for any of the huckleberry plants to produce a harvest this year, before the days shorten and it starts snowing (again)?

You changed your picture - looks like Roswell (or is it Area 51?).

great report and pics van. do you know if the indian race track and red mountain area are melted out at all yet? im an indian heaven newb and would love to get up there for only my third trip ever! but the snow has been hard to calculate other than the fact that there's still some to deal with.
Top

A good loop on unmaintained trails takes off through the meadow on the almost-enclosed bay at the south end of Chenamus Lake. It heads up through woodland dense with huckleberries overhanging the path and reaches Rush Creek, which here is just a long, narrow pond in late summer. The trail eventually crosses the creek, heads through woods and meadows to a large meadow, where you go left and skirt it to reach the tread of the old Cascade Crest Trail. You go left, pass signposted Acker Lake and head up to Trail #176 at Bear Lake. Go right about 75 yards to the PCT, then left and along to the junction with Trail #29 and then back down to complete the loop.

It's about 10 miles and 1,450' elevation gain (I don't use a GPS: map and occasionally compass always served me well). This loop is used by a few horse parties during the summer. I wouldn't attempt it under snow, but it involves minimal meadow-bashing and helps make Placid/Chenamus a worthwhile day hike or ride.
Top
Post Reply
14 posts