Before various trails in California, Oregon, and Washington were welded into the PCT in the mid 1970’s, each state had its own trans-state trail system. In Washington, this was the Cascade Crest Trail (CCT). Its southern end used to run from Big Huckleberry Mtn S over Grassy Knoll (all of you who’ve hiked Grassy Knoll have done a small part of the CCT), through Triangle Pass, around Augspurger Mtn, over Dog Mtn, and end on Hwy 14 (then U.S. 830) at the Cascade Crest Trail Inn (now the Dog Mtn parking lot). This part of the CCT was abandoned when the PCT was built from Big Huckleberry SW to near Cascade Locks – presumably so hikers could easily cross the river and obtain Char Burgers. Don Nelsen provided his maps of this section of the CCT (Don's CCT) and I was able to locate a copy of an original (1962) CCT trail guide, 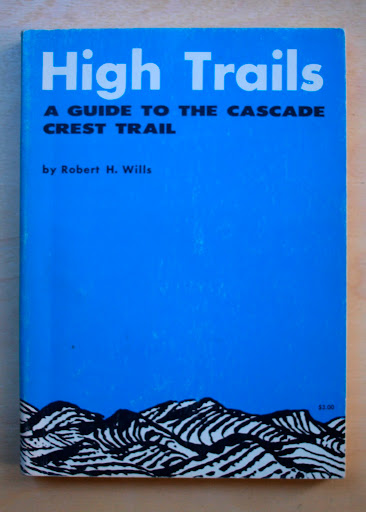 which includes somewhat vague maps of the trail’s alignment. 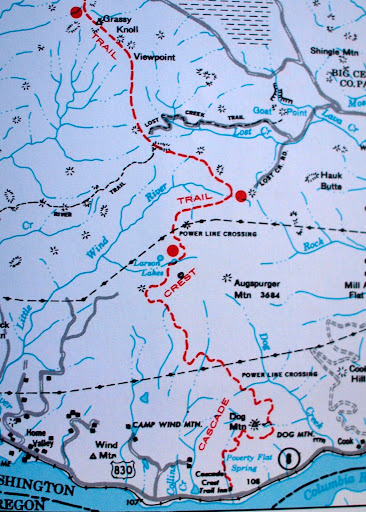 I thought it would be fun to poke around and see if I could follow parts of the old CCT, so Friday I headed N on Trail 147 from the Dog Mtn parking lot (only 6 cars were already there!). Weather was excellent – cool early on and warming a lot later but with a nice breeze all day. On the way up, there’s a great full on view of Mt. Defiance (D) and Lindsay Ridge (arrows), which had been a loop hike earlier this year (Defiance/Lindsay). 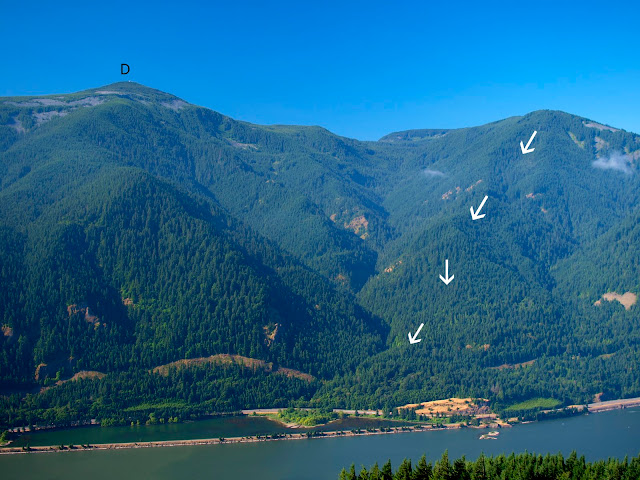 On the way up Dog Mtn, I was surprised by the amount of overgrowth in some places. Later I would find that long stretches (maybe as much as 3.5 mi) of the Augspurger Mtn Trail (# 4407) are similarly overgrown. The trail itself isn’t vegetated, just overgrown so you just can’t see it – in places I had to feel for it with my feet. 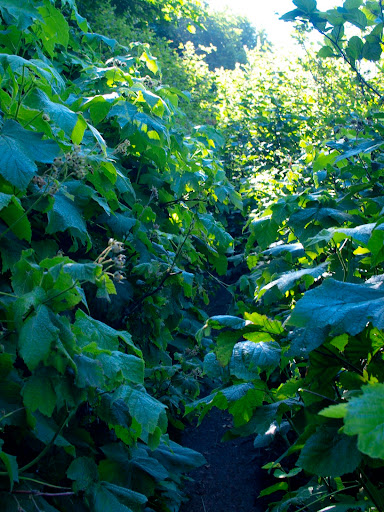 I took the part of the Dog Mtn trail that circles around from the E in hopes of seeing some remnant of the CCT in this area (red dotted line – as shown on the 100K but not 24K map), but the vegetation was just too thick. 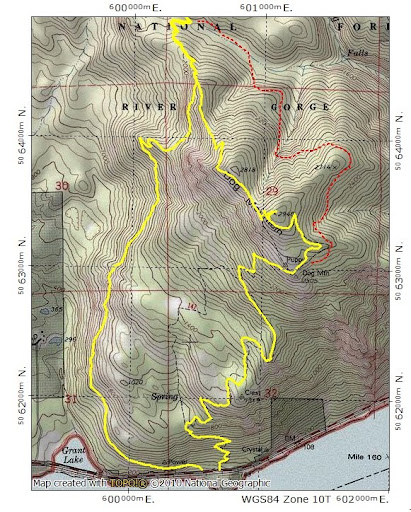 Just before the top of Dog, I came across this grouse strolling along the trail. 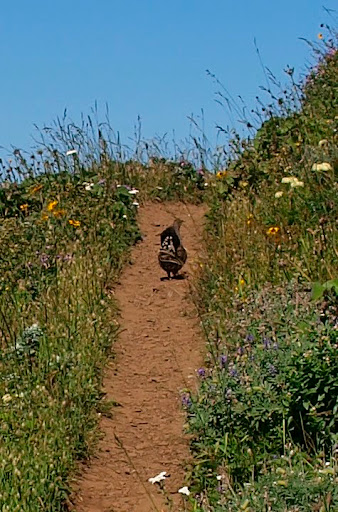 I took one picture, and was moving closer for another, when another half dozen grouse exploded out of the brush on either side of the trail – obviously a trap and I’d fallen right into it – score another heart-stopping moment for the thunder chickens. From Dog I pushed N on trail 4407A – past a surprising number of still blooming flowers, 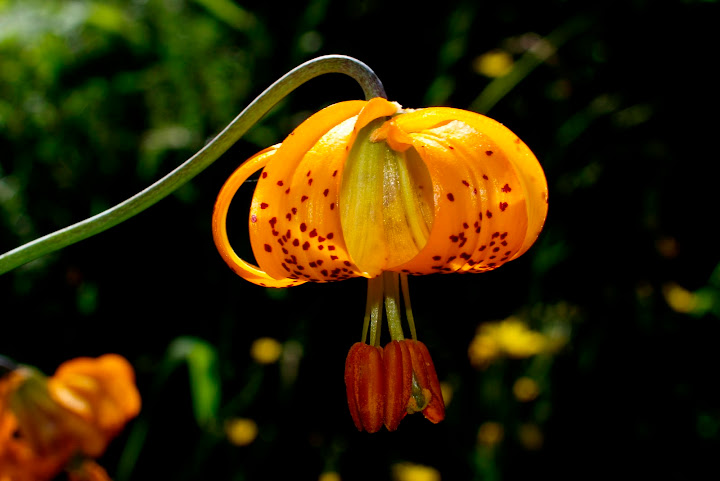 to its junction with trail 4407 to Augspurger. 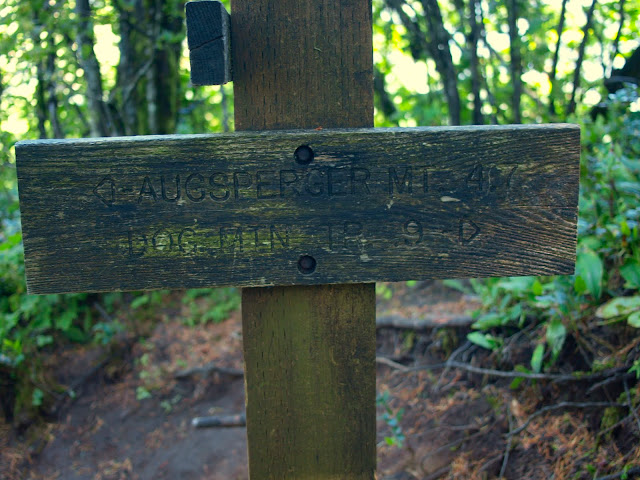 From here, you go down, connect with a service road, go up, re-connect with a trail, and climb to a point (2950’) with a good view back toward Dog and Hood. 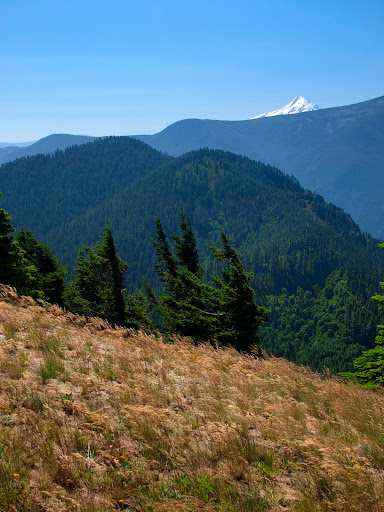 Trail 4407, despite climbing to 3600’, is stingy with its views, but there was one of Hood from Augspurger’s S ridge, 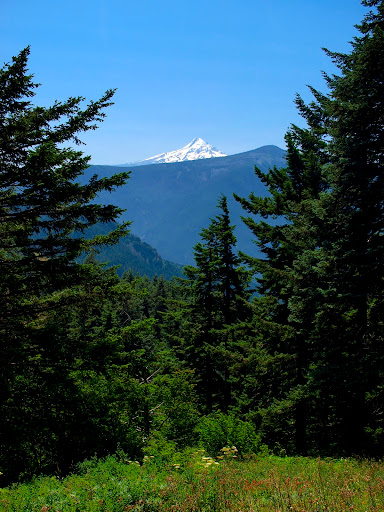 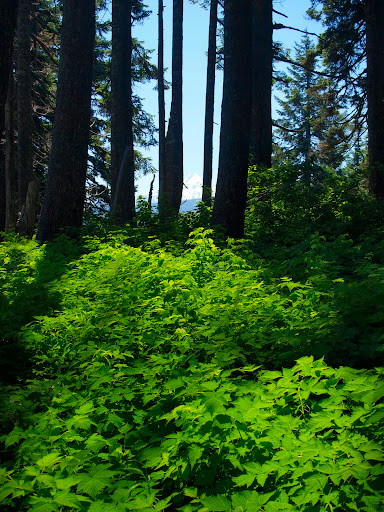 but good ones of St. Helens, 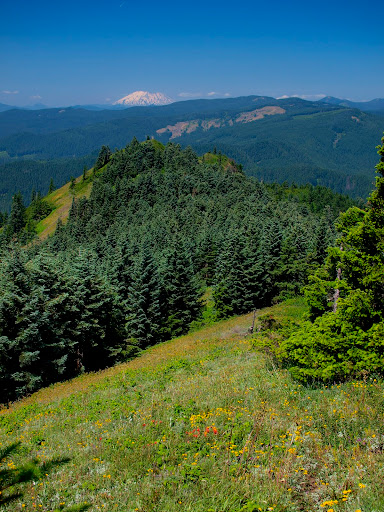 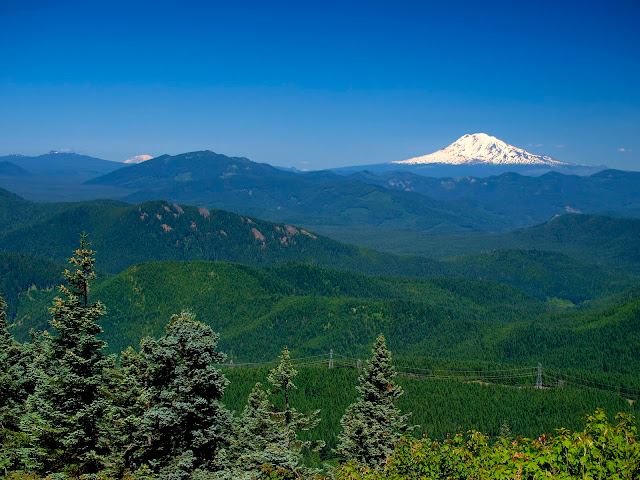 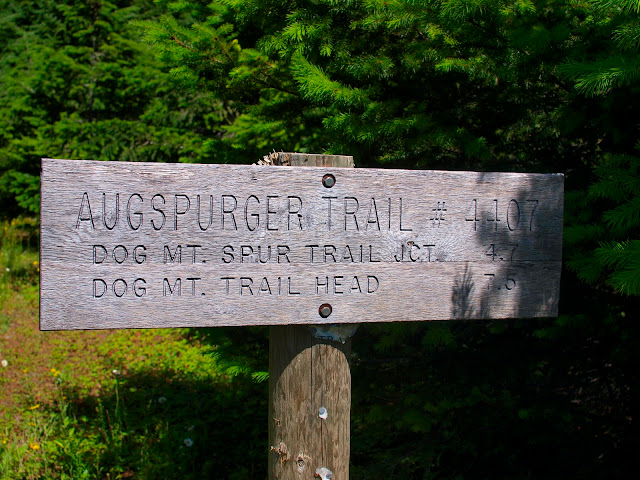 at the end of a flower-covered “parking” lot just off a power line service road. So, so different than the parking lot at the trail's S end! 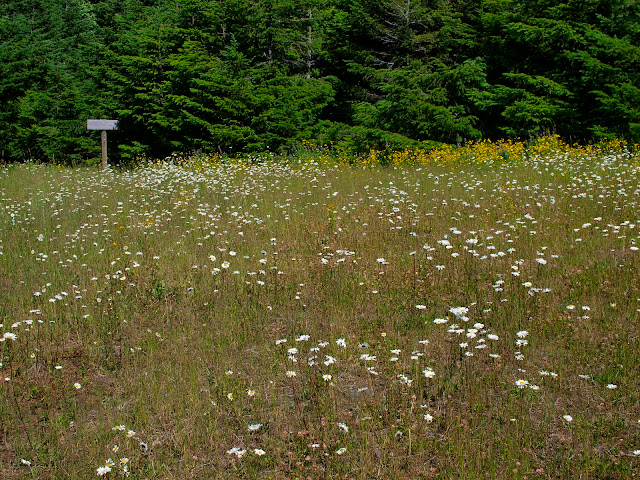 Looking back, I could see the cliffs guarding the N ridge – the trail follows the ridge and then gets around the cliffs by descend on the back side of the ridge. 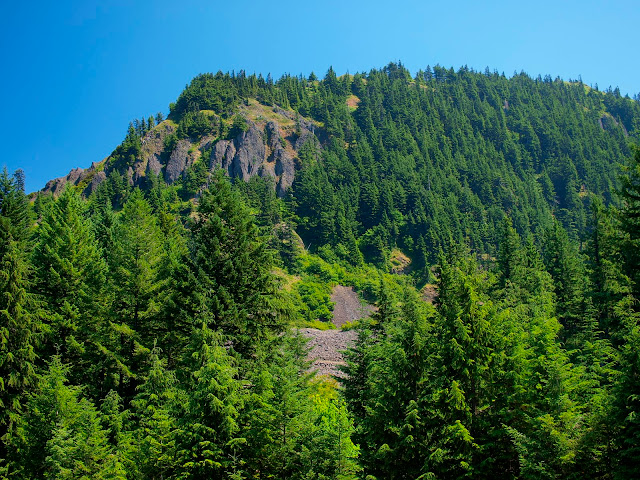 Despite being written up in Lorain (2nd edition, pg 260, map pg 257), this trail – based on its overgrowth and sketchiness in spots on the N ridge – doesn’t seem to get much use. The CCT went S from near the end of 4407 on logging and service roads. I followed a series of well used service roads (for BPA, gas pipelines, fiber optics) W and S – ones that I though best approximated the CCT route description. 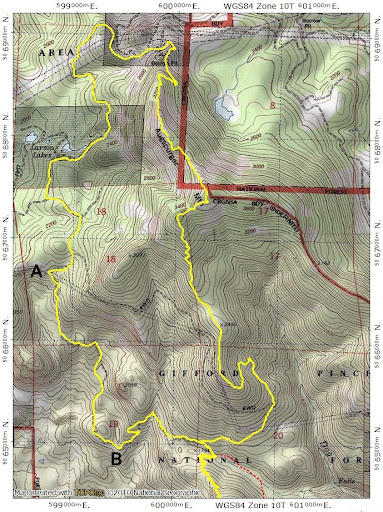 At point “A” (above map), I turned on to a now abandoned road that could well have been part of the CCT. 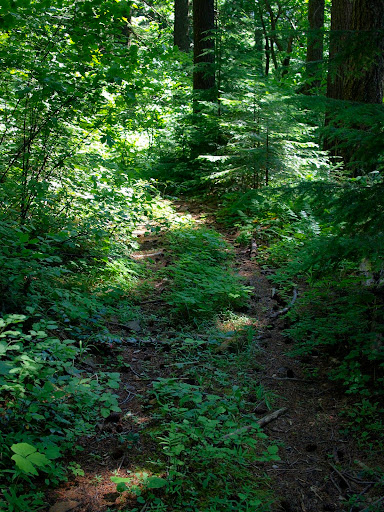 There’s a T-junction at point “B” which is not shown on the topo maps but a right turn would take you to Bergen Rd and eventually Hwy 14 at Collins Point. I turned left and followed the road back up to where I could rejoin trail 4407 for a return to the TH. When I crossed the drainage at 1700’, I again looked for remnants of the CCT (as a trail) but nothing was evident through all of the brush. If something is to be found, winter might be a better time for it. Still I think I did find some of the CCT and even if not, it was fun to piece together a figure-8 hike involving Dog and Augspurger. All told 17.6 mi and 6200’ (lots of ups and downs on the ridges and roads).

Thanks, Van - great report, as always! You've answered one question I've had about the CCT, and that was whether it came close to the prominent east viewpoint you can see on the shoulder of Dog Mountain -- on the old maps it's hard to tell how far east of the summit the alignment went, but it looks like it's still a few hundred vertical feet up from this spot (plus, brushed in). Nice report and info love that grouse nice shot. When I moved east of Seattle from Iowa in the late sixty's my friends dad took us on lots of hikes and I remember the term CCT.

Thanks Tom.
The downhill of the mind is harder than the uphill of the body. - Yuichiro Miura
Top

Roy wrote:Nice report and info love that grouse nice shot. When I moved east of Seattle from Iowa in the late sixty's my friends dad took us on lots of hikes and I remember the term CCT.

In the late 60's, the CCT would still have been the premier state trail in Washington. Hopefully one (or more) of your hikes included part of the old trail.
Top

VM, I've been doing some old CCT research and came up with this tonight.

Yesterday while hiking in the area, I saw what looked like another trail at what appears
to be a 4 way junction of trails and power line access road. There was a ribbon on it
as well, pretty sure the old CCT is right there and cuts across terrain wisely rather
than making hikers go longer on the still existing access road as you hiked -

Looks like just a short stretch of trail before it again meets up and shares those
access roads and continues up around Larson Lakes.
Top

Eric Peterson wrote:VM, I've been doing some old CCT research and came up with this tonight.

Yesterday while hiking in the area, I saw what looked like another trail at what appears
to be a 4 way junction of trails and power line access road. There was a ribbon on it
as well, pretty sure the old CCT is right there and cuts across terrain wisely rather
than making hikers go longer on the still existing access road as you hiked -

old_cct_jct.jpg
Looks like just a short stretch of trail before it again meets up and shares those
access roads and continues up around Larson Lakes.

The 1962 guide suggests a trail between its mile point (MP) 20.7 and the powerline clearing at its MP 21.7. Here are the pages from the 1962 guide that describe the route from Larson Lakes to Dog Mtn (a LO at that time). 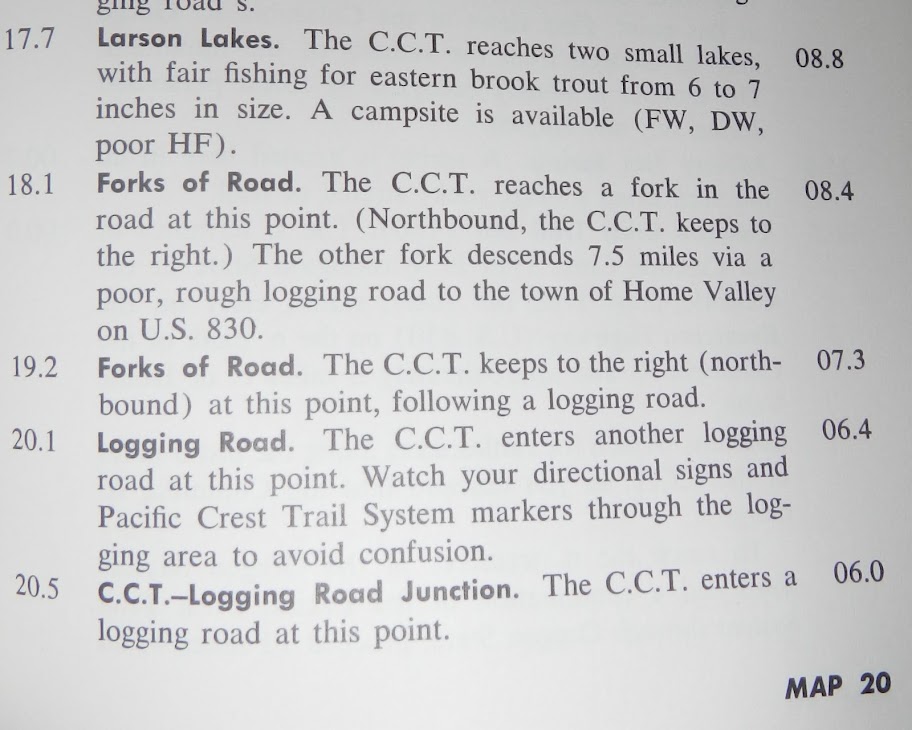 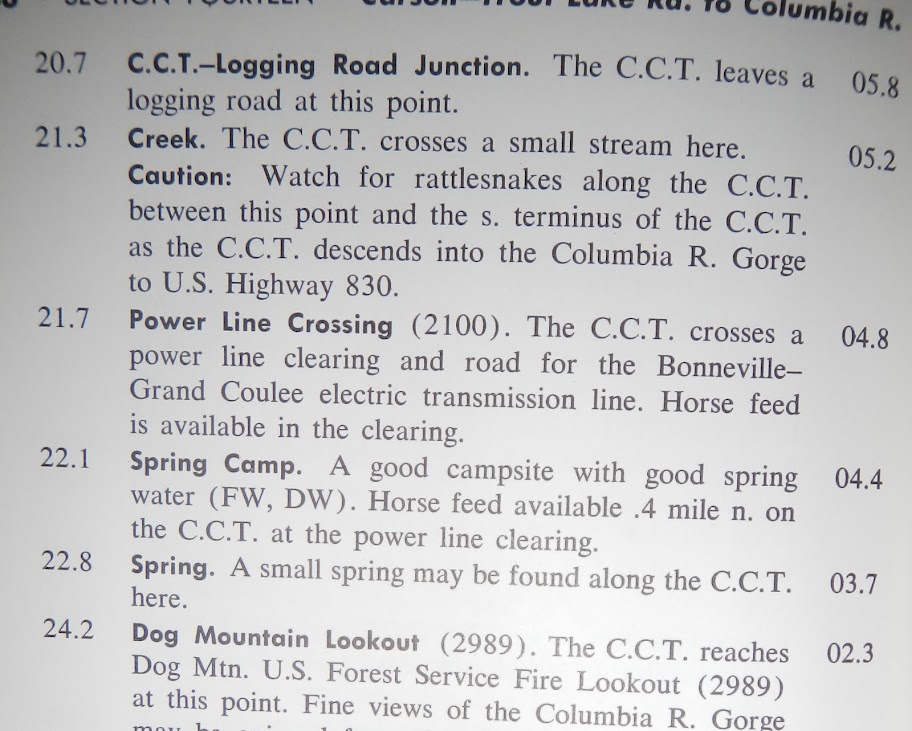 There might still be a bit of trail visible. It was only 1 mile. When I did my hike, a new service road for a fiber optic cable can been cut almost where this trail is shown - I think bosterson took that road when he did this hike last year. It would be equally interesting if you could find the old CCT heading S for Dog from the powerline crossing.
Top

Awesome VM! That seals the deal after measuring the geo referenced USGS map that I posted
above, the stream comes in at 4.9 miles from HWY 14, pretty close to the 5.2 in your book!

So that short section of trail might still be viable.

Also, it is still .4 miles from the 4 way junction I circled to the described power line clearing/Spring Camp.

Will have to revisit this area for sure, I think it is easier in snow actually for navigating
the brush. I know the brush is crazy on the east side of Dog when I happened across part of the old
CCT/Road grade last summer unknowingly.

BTW, there was also this DN entry awhile back on the exact subject as well that I found
after I geo tagged that above image in GE, looks like he traced the CCT alignment in
NG Topo from either a USGS quad or a Green Trails map -

VanMarmot wrote: It would be equally interesting if you could find the old CCT heading S for Dog from the powerline crossing.

Just saw this part of your reply and... oddly enough 1 of the mapsets I use in my Garmin
actually has most of the section you mentioned in the quote hard coded as a road grade and
labeled Dog Mt. TRL.. It's not a perfect rendition of what is on the older '57 USGS quad
but pretty close. And I happened onto part of it while coming up from Elkhorn Falls last July.
I hope to get out around that area again while the snow is still trampling the overgrowth.
Btw, in the low point saddle/clearing north of Dog, you can somewhat make out a
road grade but it's super full of blow down and sawed up logs...
Top
Post Reply
9 posts • Page 1 of 1