After the Grassy Knoll debacle, I decided I couldn't let half a tank of gas go to waste, so I looked for another hike in this neck of the woods. I settled on Sedum Point, which you get to by hiking up the PCT from Road 43, near the Hemlock Lake Recreation Area. Unfortunately, I had forgotten my hiking poles at home, and with a 10-mile 2,000 foot elevation gain hike to get to Sedum Point, I shortened my plans considerably and just hiked to the first viewpoint. 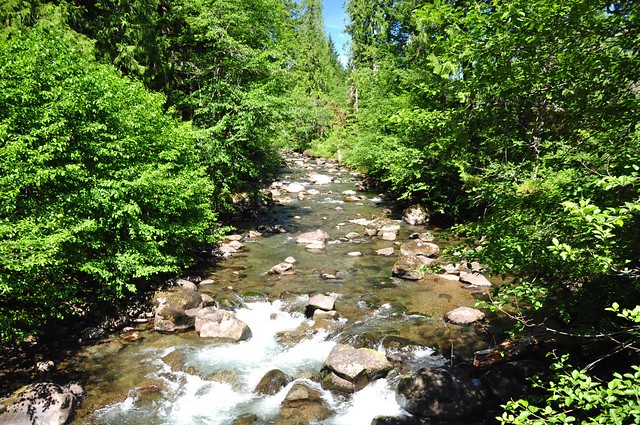 And then it meaders through the woods for a little over a mile, gaining about 400 feet elevation. There there is a lovely little viewpoint with views to the east and the north. Trout Creek, which I had crossed at the beginning of the hike, roared below me. 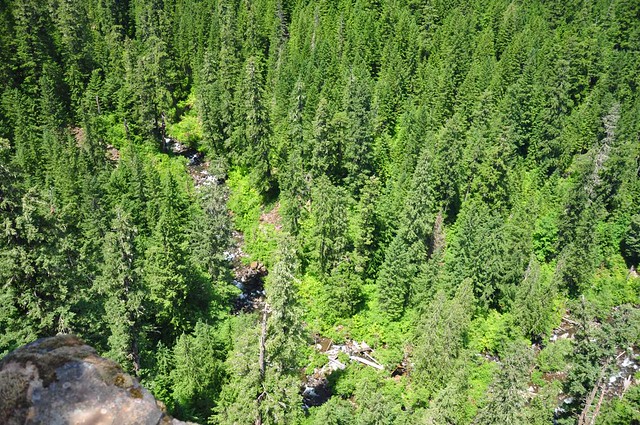 I could see Bunker Hill to the east (I hiked up there a few years ago and discovered that the former lookout site on the summit has become completely overgrown and there are no views.) 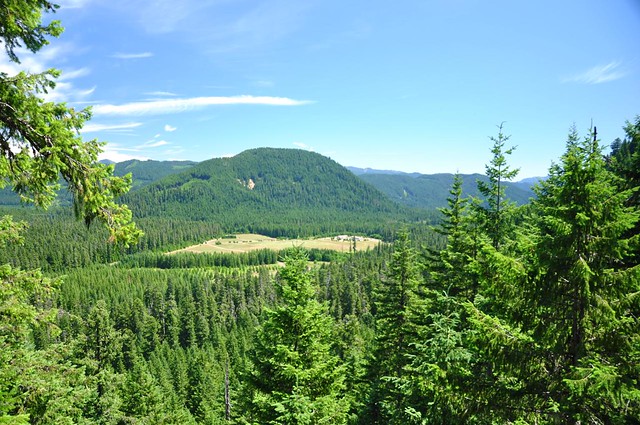 Here's the panorama, looking north from the viewpoint. I'm pretty sure the logged hill in the center is Trout Creek Hill. Check out those beautiful blue skies with the streaky clouds. Ooooh.

While hanging out at the viewpoint and eating my lunch, I was perusing the National Geographic Gorge map, the only one I had brought with me. I decided that when I got back to the car I would try to drive up Road 43 to Road 41 and see how close I could get to Mowich Butte. From the map it looked like I could get very close. According to the map it ended at/near the butte and I was hoping that an old continuation of the road, or maybe a trail, let up to the summit.

So after getting back to the car I set off up the road, which was in great shape. I made the turnoff to Road 41 and drove as far as I could before I reached a big berm, beyond which the road continued. Two other cars were parked there. That was encouraging. Cars parked here meant there was something to see, I hoped. So I parked too and set off along the decommissioned road.

There were a lot of berms, both big and small. Are they trying to keep out ATVs, or is this just what the FS does when they decommission a road? Except for the berms, the road was in great shape. No washouts, not overgrown, and very drivable still (except for the berms). I reached a heavily pitted/bermed junction where Road 41 continued east (to Sedum Point) and the old road to the summit continues up.

The forest has been thinned up here, and it looked like it had been done in the last few years. When I got home I found this and this online. A huckleberry enhancement project, eh? I've never heard of such a thing, but now I'm thinking I'll have to come back up here during huckleberry season and check it out. They must have decommissioned the road after they thinned it, which explains why it's still in good shape. It's only been out of commission for a few years.

The beargrass seem to prefer the thinned areas. There was quite a lot of it up here. 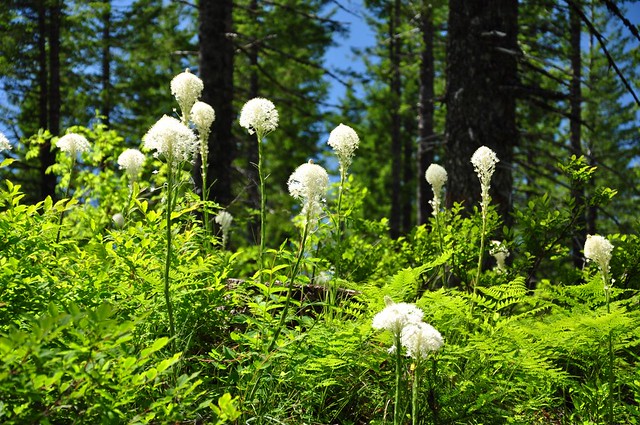 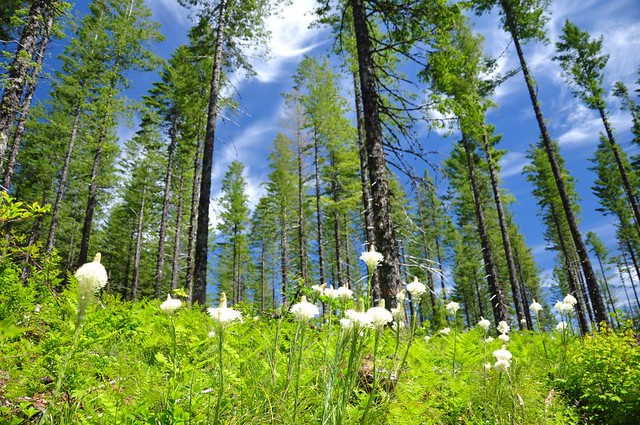 Mowich Butte was once a lookout site, so I was hoping for good views, especially since Romano's book says "The lookout is long gone and vegetation is growing in, but there's still excellent viewing north to Adams, Saint Helens, the Trapper Creek country, and a slew of old volcanoes and craters in between." But when the road reached the top, I was surrounded by a lot of forest. The road continued a short ways along the summit, this part very overgrown. 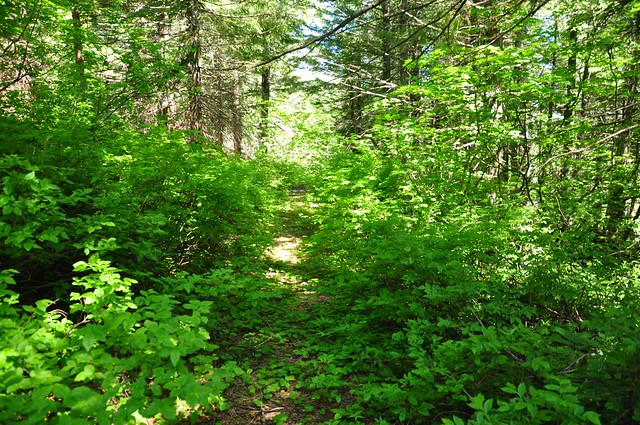 But it ended at a wall of brush and trees. Hmmm....what am I missing? Where are the views? Do you have to bushwhack to another part of the summit?

I wasn't comfortable bushwhacking too far by myself, but by going off the old road for a short distance, I was able to get glimpses of Mt. St. Helens and Mt. Rainier. With my zoom lens I got some halfway decent pictures. 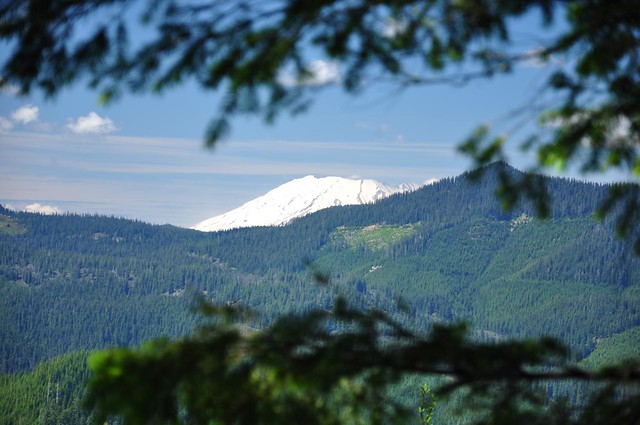 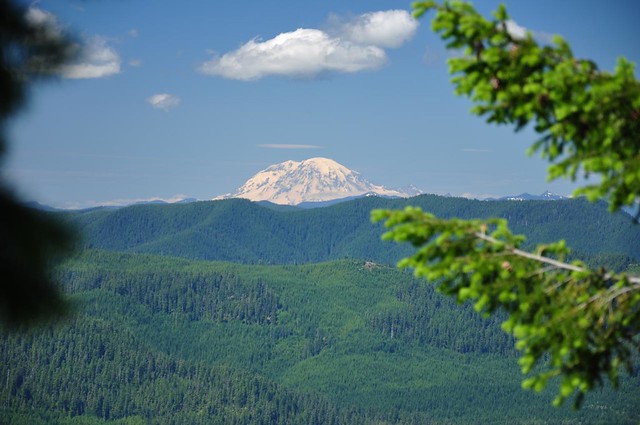 I had been looking forward to sitting on a mountain, soaking up the sun with views all around. But alas, it was not to be. Disappointed, I headed back down. On the way I got a glimpse of Mt. Hood through the trees. 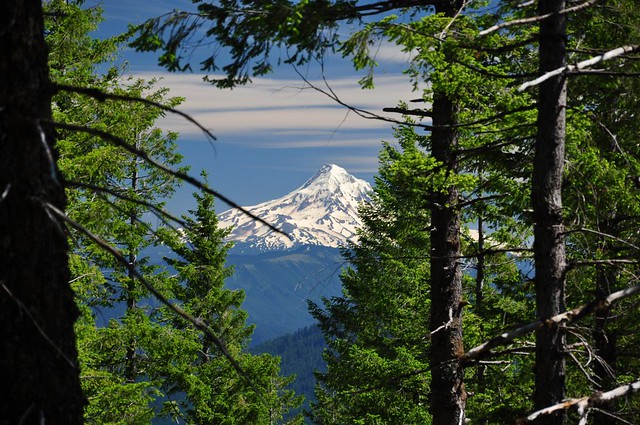 I hadn't been able to get a view through the trees of Mt. Adams, but on the drive down I got a nice view. 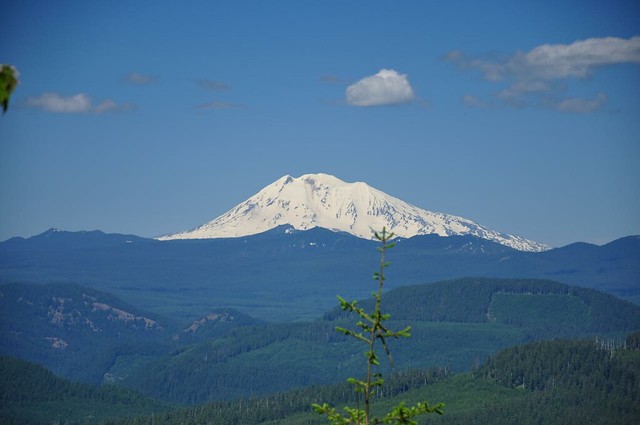 The current topo maps don't show the decommissioned path of Road 41 past the point where you have to park, but the topo overlay on Google Earth shows it. I've marked where the road ends. The dashed line is the summit road. As you can see, the summit is VERY close to the trailhead, as the crow flies. But by foot it's probably about 1.5 to 2 miles one-way. 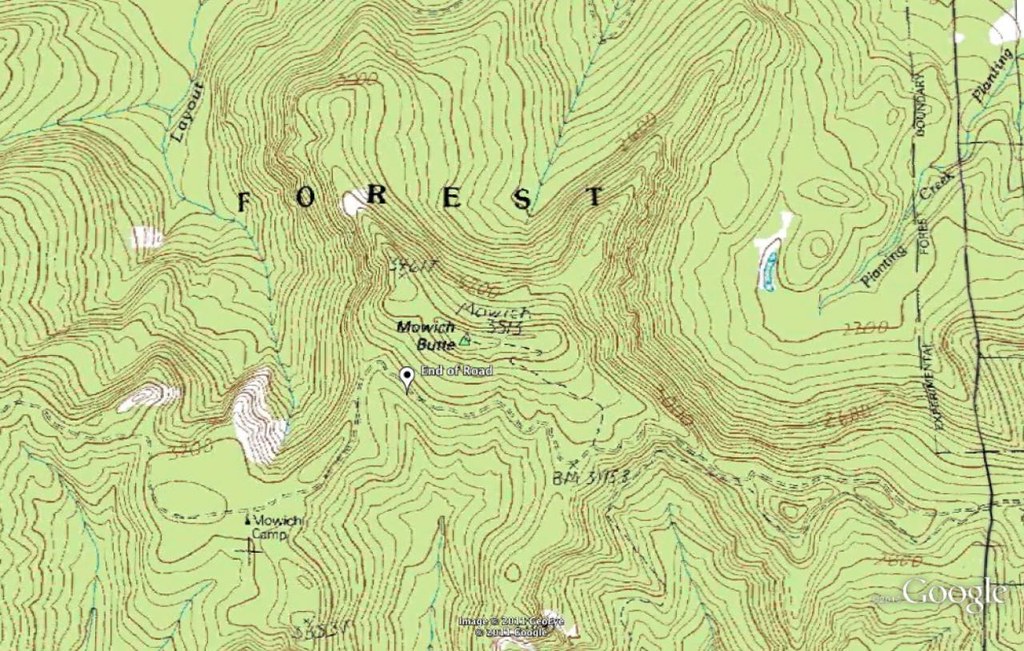 When I got home I saw that Sedum and Mowich are in Doug Lorain's Afoot & Afield book, and he too mentions the excellent views to be had up here. Can anyone enlighten me about where I might find them? If you could just get to the right spot, you could see all sorts of great stuff up here.
Top

The beargrass picture with the wispy clouds is very cool.

My favorite hikes are often those unusual ones you wouldn't pick otherwise, after bailing.

Same thing happened to me a few weeks back - I found Lava Butte right around that same area, and then saw a bear!
Hikin' Log
Top
Post Reply
2 posts • Page 1 of 1