Last weekend I took my 9 year-old daughter on her first backpack trip. I looked for something with a moderately short hike in, but not so short that it wouldn't feel like a real trip (so more than a mile, less than ~4.) I also wanted someplace interesting, with side trips to do while there. The late snow melt this year made it difficult since many nice choices are snowed in (Wahtum Lake, Elk meadows.)

I finally settled on Twin Lakes: easy access from HY 26 (right at Frog Lake snow park), 2 mile hike in, lots of trails in the area to explore. But I was still worried about the snow level. Trip reports last week for destinations in the area (Boulder lakes, Kinzel lake, Shellrock lake) showed extensive snow at similar elevations (around 4,200'.) It turned out not to be a problem. Although there were scattered snow patches everywhere, heavier on north- and east-facing slopes, the campsites at lower Twin lake were all snow free. On our hike up to Frog Butte, we ran into frequent snow on the trail around 4,400' (on an east-facing slope) and continuous snow completely obscuring trails between 4,800' and 5,000'.

The trip was a great success. The Twin Lakes area gave us lots of interesting places to explore. I'll let my daughter give the rest of the trip report:

My Dad and I went on my first backpack trip last weekend. We went to Twin Lakes, near Mt. Hood.
This is a picture of us wearing our backpacks loaded up for the trip. We started hiking in the late morning. Here I am at the trail head: 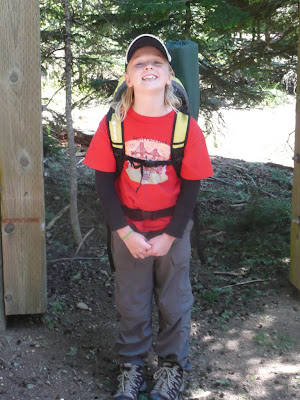 The trail is about 2 miles to lower twin lake. We started on the Pacific Crest Trail, which wasn't too steep and was quite wide. After about 1.5 miles the PCT reaches a saddle and a side trail leads to the lake. This is where we saw a few small patches of snow. 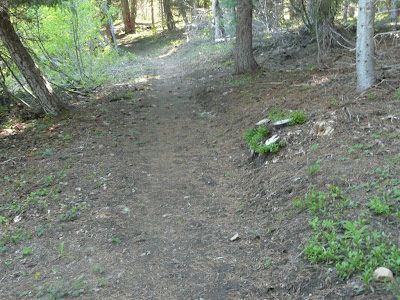 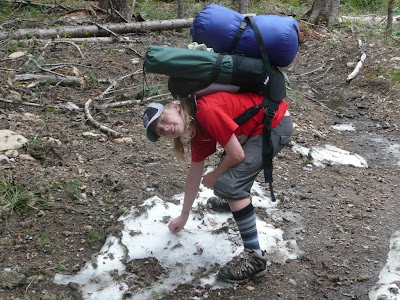 When we got to the lake we saw a few people setting up camp. We walked around the lake to find another camping spot. We choose one across the lake. There were just a few patches of snow on the ground around the lake. We setup camp and had lunch. [ed: note the 25 year old Timberline tent!] 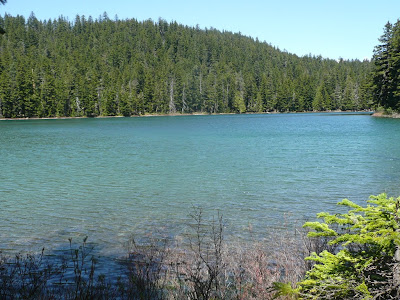 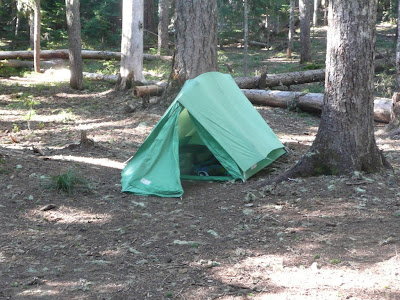 After lunch we hiked about a mile to upper Twin Lake. 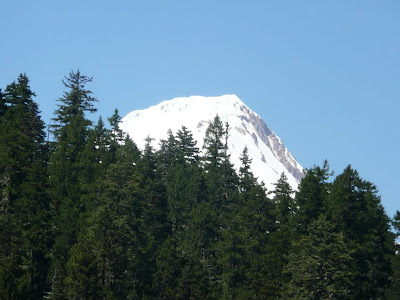 We continued on to Palmateer view point, about 1.5 miles beyond upper Twin Lake. Here is a picture of a white trillium and another flower that we did not no the name of. [ed: I think it's an Oregon Windflower, or Western wood anenome.] 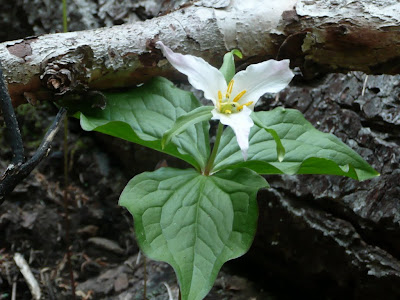 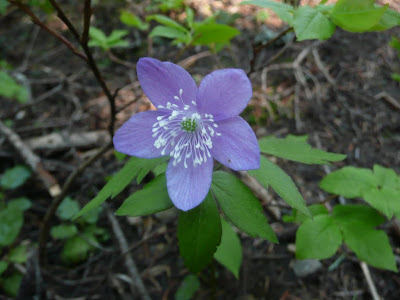 The trail was very narrow and when we were going down to Palmateer creek it got very very steep. There was a neat bridge over the creek: 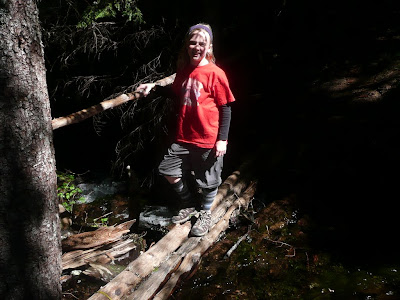 The approach to Palmateer viewpoint: 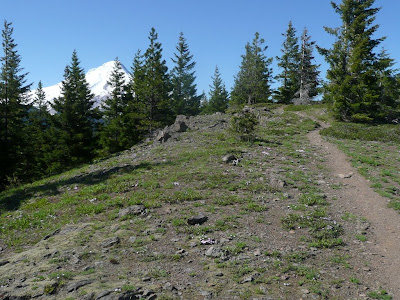 When we reached the view point we saw Mt.Hood and i got some really good shots. 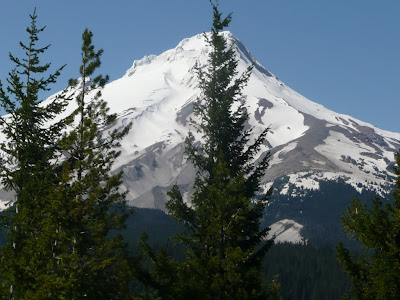 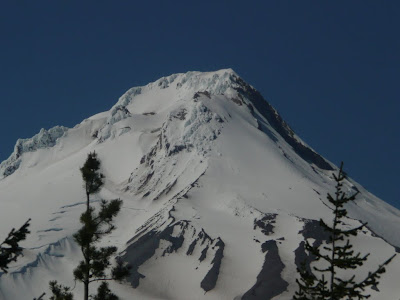 Mt Hood and Barlow Butte, from the Palmateer viewpoint: 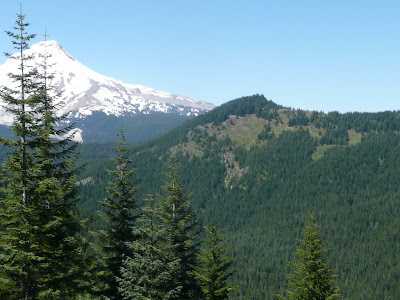 Then we started the hike back. We decided that we should bushwack to a different trail that came down to upper twin lake. There was a lot of snow on this trail, because it was on the north side and more shaded. 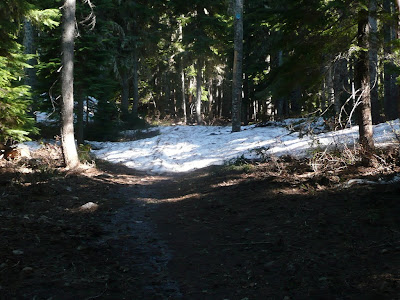 We hiked back and got the stove going, lit a fire, and had dinner. 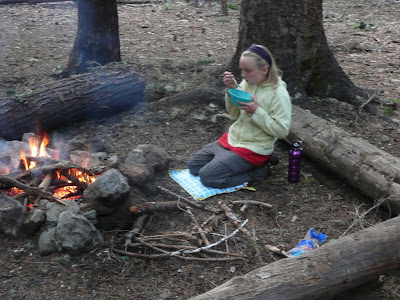 About 9:00 we went to bed. We woke up around 6:55 and got out of the tent at 7:00. We had a small problem with matches. [ed: somehow our matches got damp overnight and none of them would light in the morning. Fortunately, we were able to borrow some from the boyscouts (be prepared!), and the prospects of a cold breakfast were narrowly avoided.] we then ate breakfast. After breakfast, we went on the frog butte trail. there was a lot of snow. After an hour or so we reached a saddle where the trail joins the trail down to Frog Lake . We continued up to Frog Butte on a really steep trail where we hit snow, I mean like a ton of snow. The trail was completely covered and we got a little lost but we found the trail again by looking for the blazes. Finally we reached the top which didn't have any snow. It was very hot in the sunshine. From the top we could see Mt. Jefferson and the Three Sisters. The trail was 2 and a half miles. 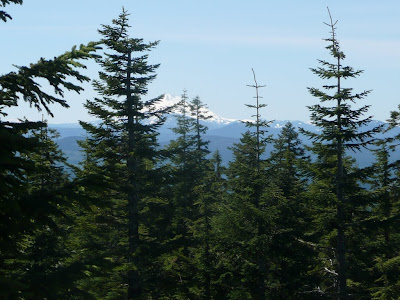 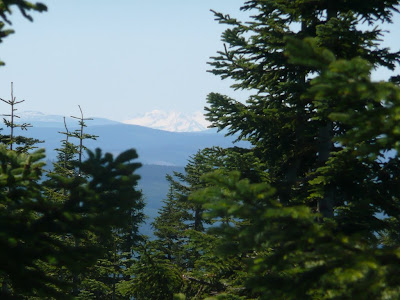 Then we hiked back to our camp, packed up, and hiked out.
This is me at the end: 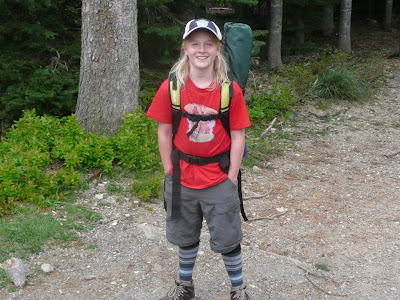 I had a great time.

Nice report! Excellent job on the hike, too.

And it looks like you had great weather for that trip. It's good to hear that you enjoyed your first backpacking trip.
Jim's Hikes

Where's your next trip?
Top

Yippee and ya-hoo for both of you! Last week I took my daughter on her first backpacking trip, but she's 25. Starting at 9 is a much better idea.

Great report! Looks like y'all had a great time. Thanks for the update on snow levels - we are doing a shuttle backpack from Wapinitia Pass to timothy Lake on the PCT this weekend but now that I've read your report, we may just start a night early and head out from Barlow, camping at lower twin lake. Thanks again!
Top

Big congrats to both of you! It looks like you had a great trip. It warms my heart to see kids backpacking, and I have a particularly soft spot for dads taking their daughters out into the woods

bellaj1018 wrote:Great report! Looks like y'all had a great time. Thanks for the update on snow levels - we are doing a shuttle backpack from Wapinitia Pass to timothy Lake on the PCT this weekend but now that I've read your report, we may just start a night early and head out from Barlow, camping at lower twin lake. Thanks again!

I would highly recommend it. I hadn't realized how close Barlow pass was until we saw the sign at the Frog lake trail head saying "Barlow Pass: 5 miles". If you have time, try to get over to the Palmateer viewpoint: it's quite a nice view of mt Hood, Barlow ridge, and the valley below.

Thanks for the tips. I hiked up to Palmateer Point from Barlow Pass last November on one of the last sunny, snowless days we had up there. A knock-out view. We will most definitely hit some snow on the PCT from Barlow Pass to the twin lakes - the high point is around 4600 feet in that stretch. Fortunately, the PCT is a super-highway there and it will be hard for us to get lost:) Thanks again!
Top

This has got to be the cutest TR ever! Congrats to you and your daughter, looks like a great time!
Top

While exploring the edges of Lower Twin Lake, we noticed these odd critters moving in the shallow water. They were about 1-2 cm long, brown, cylindrical-shaped, with no discernible "face" or appendages. On closer inspection, you could see tiny legs sticking out one end. They looked like tiny hermit crabs that had used short, hollow woody stems as a kind of shell. Here's a couple pictures. The first is fuzzy, but the larger "woodchip" in the center is what we saw moving. Again, in the second photo, the "woodchip" in the center is the critter. Pretty good camouflage!

Does anyone have any idea what they are?
Top
Post Reply
17 posts