Yesterday, Peder and I met at the outer Eagle Creek TH (near the “historic toilets”) to arrange a car shuttle. From Eagle Ck, he headed up Ruckel Ridge to explore the Benson Plateau, while I drove his car to the Herman Creek TH to take the PCT over to the Eagle-Benson trail and Eagle Creek. This allowed us both to enjoy “loop” hikes without actually having to make the tedious hike between the Herman and Eagle Creek THs. Peder also figured a hike involving me would guarantee bluebird weather (he was right - the gray gloom disappeared immediately after Troutdale). From the Herman Ck TH, I took the 406 and then the 406E trails over to the PCT. 95% of the trails on today’s hike were snow-free and all were sun-dappled. 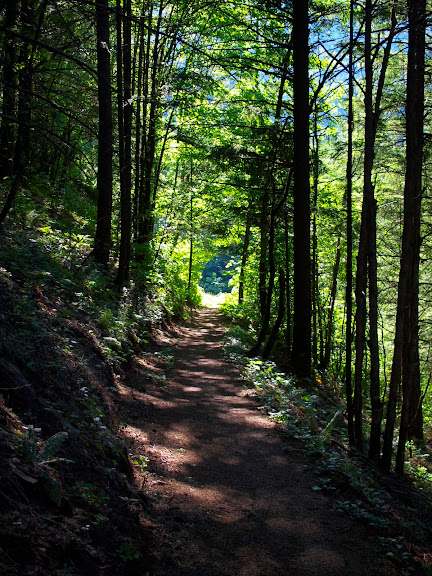 There’s one spot on the PCT that provides an almost head-on view of the Greenleaf Basin, 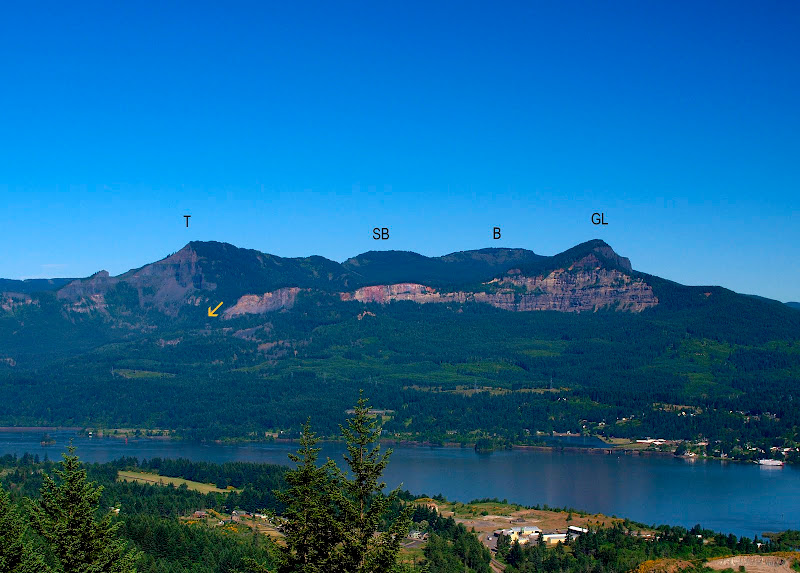 with Table (T), South Birkenfeld (SB), Birkenfeld (B), and Greenleaf (GL) ringing the Basin. The arrow shows the location of Greenleaf Falls, an exciting way into or out of the Basin.

Higher up on the PCT are a couple of open areas, the lower of which provided a clear view of Adams. 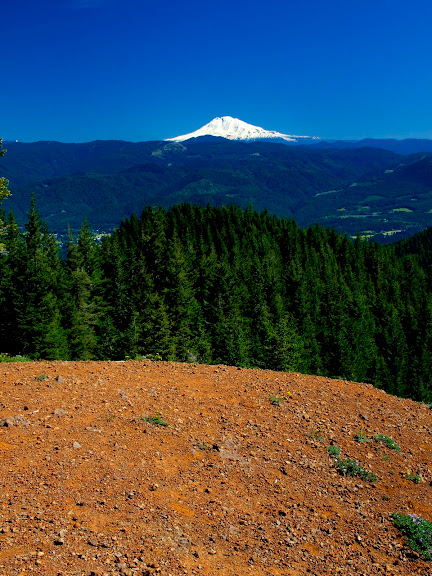 The only significant snow on the PCT where it crosses the Plateau was between its northern and southern junctions with the 405B trail. In only a few places did it obscure the trail entirely but the path of the PCT is hard to miss even if you can’t see the trail itself. 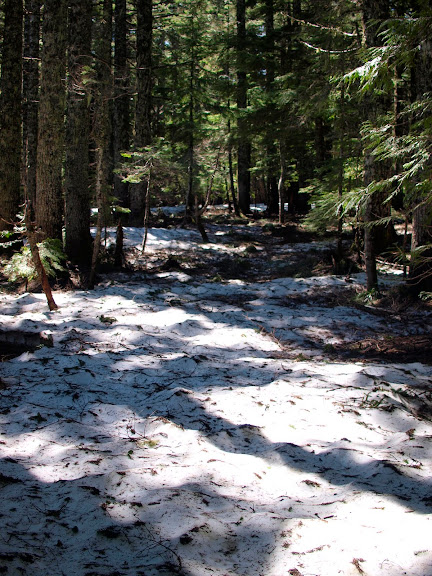 This section of the PCT skirts the E side of the Plateau and there’s one place where it comes close enough to the edge to provide a great view of Hood. 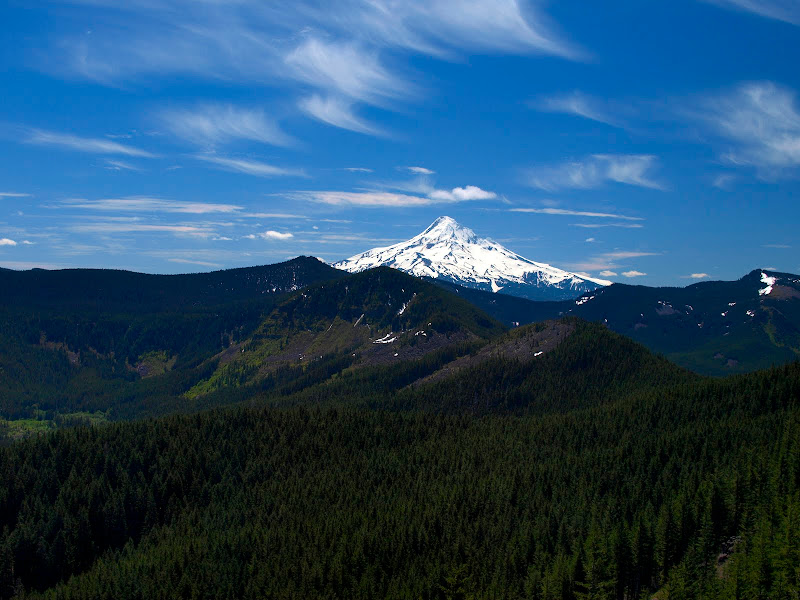 By the time I reached Camp Smokey (and lunch), all the snow was gone (there’s probably more farther S on the PCT). “Camp Smokey” is starting to look like “Fort Smokey” what with a palisade of timbers that’s been erected around one of the tent sites. Probably as a defense against Big Foot. 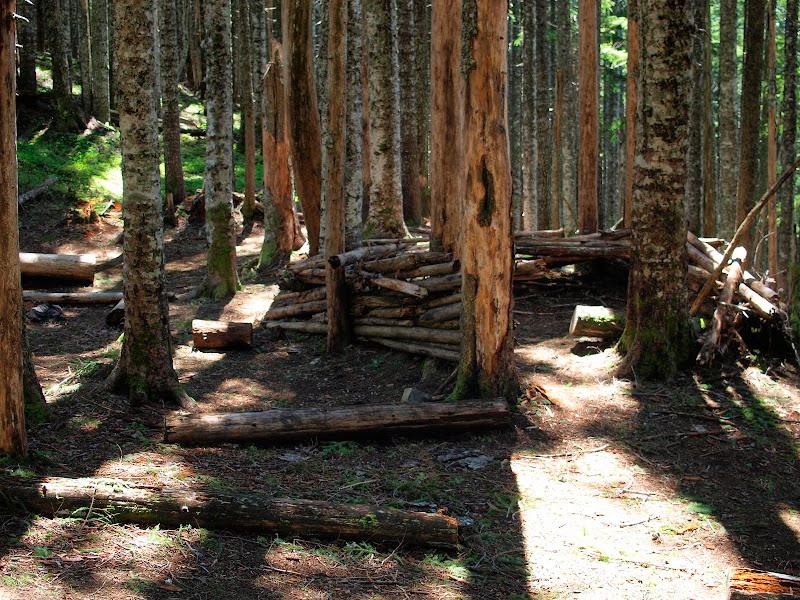 Smokey is where the Eagle-Benson (434) trail 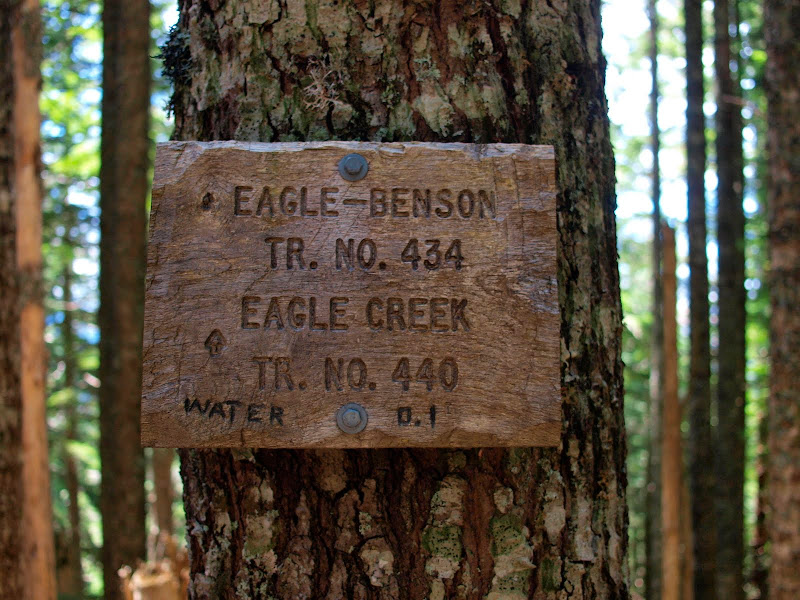 starts its plunge to Eagle Creek. The last time I did the 434 was before it had been refurbished by at least two Mazamas trail maintenance trips. The middle section of the trail had experienced a fire and was a maze of brush and fallen trees with little or no trace of the trail for hundreds of feet. It was a long and tedious exercise in route finding. This time, however, thanks to the Mazamas, it was an easy descent to the creek. Climbing up it would be another matter, since it seems to have been built when switchbacks were in short supply and there are several long unshaded sections. Shortly after leaving Camp Smokey, there was a big view of Silver Star (still with snow), 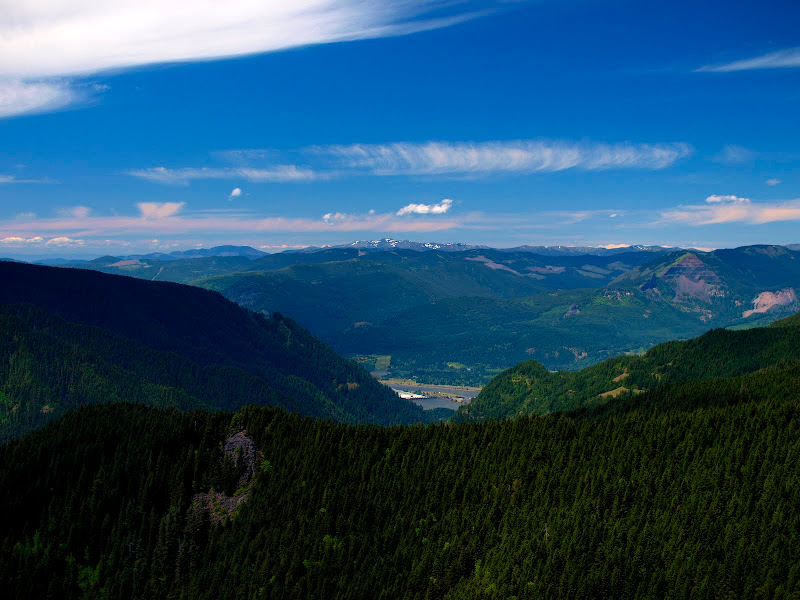 and later, a view of Tanner Butte (also still with snow). 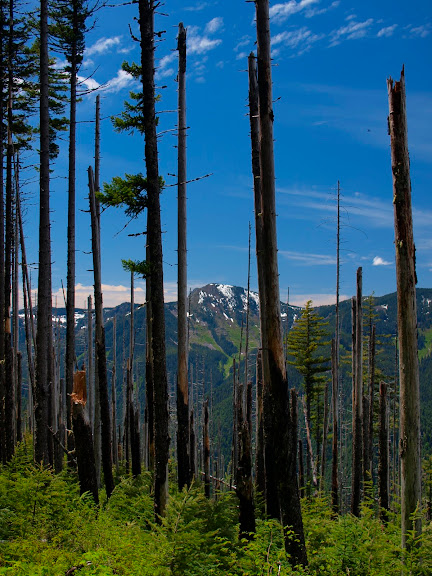 Near the end of the 434, you can get an oblique view of Wy'East Falls, which is probably a better view than you’d get if you bushwhacked up to the base of it from the Eagle Creek trail. 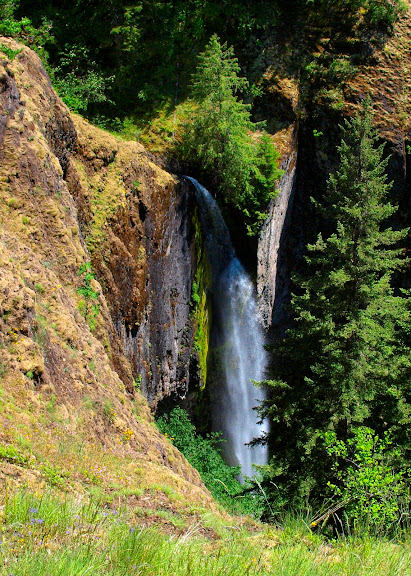 Soon I was on the Eagle Creek trail, dodging the crowds as I headed down to the TH. It had gotten a lot warmer by now (finally!) and Eagle Creek was starting to look pretty inviting. 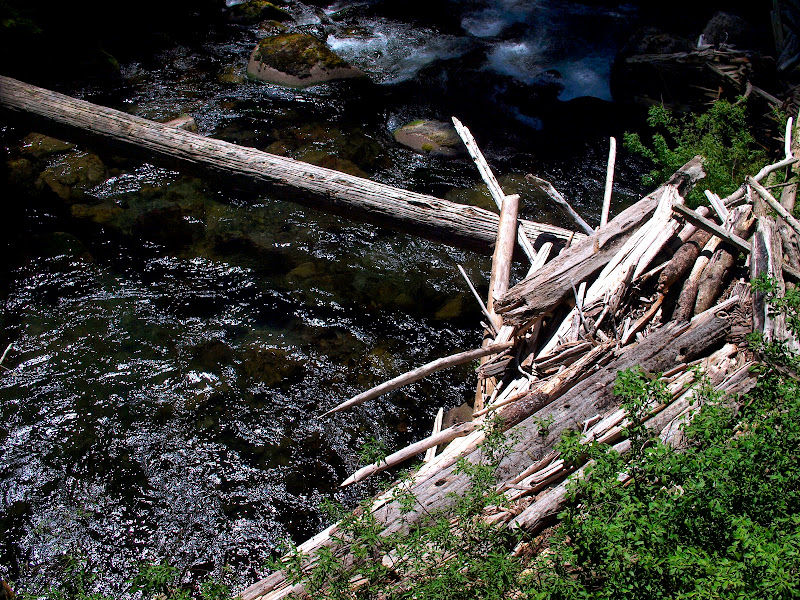 But I opted for a cold one at home and kept hiking. At this point the car shuttle idea came into its own as I had absolutely no desire to walk back to the Herman Ck TH. All told, for 17 mi with 4300’ of gain, a great hike on a great day! 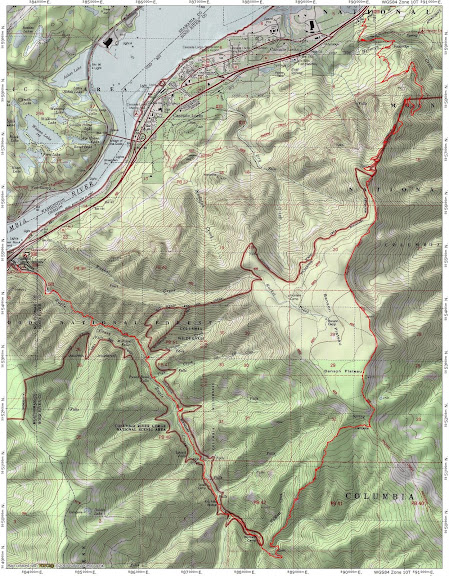 Neat-o - that's a great way for you guys to simultaneously do a pair of seemingly unrelated hilkes, so I take it Peder took the route he describes in the off-trails forum. Also, nice pictures. I know this is done, I don't recall a trip report here on PH where anyone actually did it. Some possibilities for some interesting variations on standard hikes, hmmm - I will ponder this...

pablo wrote:...so I take it Peder took the route he describes in the off-trails forum.

I would guess so - didn't see Peder again once we parted in the morning. But Peder's shuttle idea worked like a charm - we each got to do our own hikes while both avoiding some hiking that was of little interest.
Top

Thanks for the report. We were going to backpack up Herman Creek and come down the Benson Plateau this upcoming weekend but changed it based on the recent trifecta of trans-Gorge trip reports that said the Herman Creek/PCT junction was covered in snow and hard to find. Now I am reading 95% snowless. We have good navigational skills but don't want to be hiking in 2-3 feet of snow. What did the junction of the PCT and Herman Creek trail look like? Thanks!!
Top

bellaj1018 wrote:Thanks for the report. We were going to backpack up Herman Creek and come down the Benson Plateau this upcoming weekend but changed it based on the recent trifecta of trans-Gorge trip reports that said the Herman Creek/PCT junction was covered in snow and hard to find. Now I am reading 95% snowless. We have good navigational skills but don't want to be hiking in 2-3 feet of snow. What did the junction of the PCT and Herman Creek trail look like? Thanks!!

The PCT is 95% snowless from its junction with the Herman Creek connector trail (406E) to Camp Smokey. S of Camp Smokey on the PCT I can't say. When I was on Green Point Mtn last week, it was all route finding on snow above 4000'. If your plan is to take the 406 to Whatum Lake and return via the PCT, there might not be too much snow until you reach 4000' right up near the lake but you can't escape it entirely.
Top

Thanks - I think what is confusing me is that you keep saying South on the PCT - but Benson is north. I think maybe you are referring to the snow levels on the PCT south to Wahtum. It sounds the PCT on either side of the section between 434 and 406 is unknown at this time.
Top

Nevermind - I just looked at your map. You were only on the Herman Creek trail for a short while before getting on the PCT. Looks like the PCT from 434 TO herman creek trail 406 (not 406E) is unknown. Thanks for working with me here:)
Top

I imagine that 406 is snowfree past Cedar Swamp campsite until somewhere east of Tomlike Mtn. If you're familiar with the area (which I wasn't) it could be possible to loop around Chindere Mtn and come back north on the PCT.
"Man who catch fly with chopstick accomplish anything" - Mr Miyagi
Top

I vaguely recall the trail getting kind of narrow and brushy near Mud Lake. I can surmise from this trip report and from your (cascadehiker's) report that the PCT from the Herman Creek junction down to Cascade locks is traversable (albeit on snow). And I'm pretty sure Herman creek trail is clear at least through 7.5 mile camp due to its elevation. The unknown is the section between camp and the junction of Herman Creek/PCT past Mud Lake. This trip is doable at this point I believe but maybe won't be as enjoyable as it would be in a few weeks. Thanks for the help guys - we are going to do a backpack on the Lewis River trail instead and side trip up the Bluff and Spencer trails and up to Quartz Creek. Its supposed to be cloudy so we wouldn't get many views along the PCT anyway:(
Top

The ridge the Herman Creek trail goes over to get to Wahtum Lake is just about the last trail in the entire Gorge to melt out, and can be hard route-finding.
Top
Post Reply
15 posts