Friday was a happy coincidence of my day off and bluebird weather. Not having had much of a view on Observation Pk last Sunday, I wanted a solid hike to a view and one that would let me check out snow conditions deeper in the Gorge. So I decided to aim for Green Point Mountain, with a return via North Lake. This year we’re getting summer one day at a time and Friday was one of those days. Starting from the Wyeth TH, 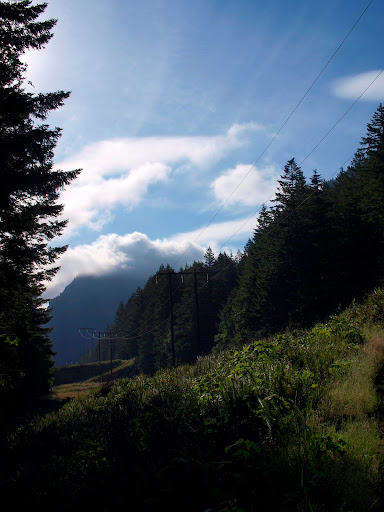 I took the Wyeth Trail (411) to Green Point saddle. 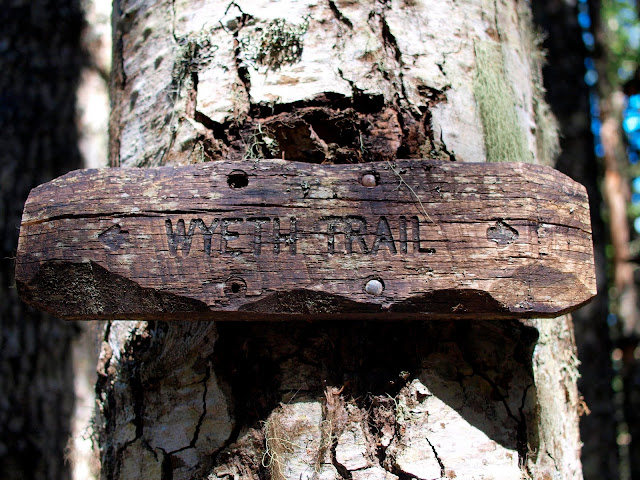 This trail was snow-free and generally in good condition (only a few minor blowdowns) all the way to the saddle. Walking up the sun-dappled trail made me feel as though it really was summer. 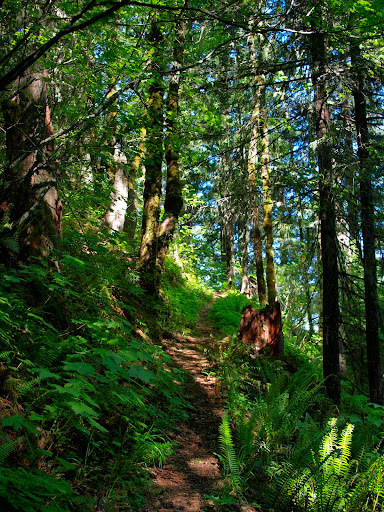 This is not a trail with abundant view points, but there are a couple of open areas where Carson and St. Helens came into full view on this nearly cloudless day. 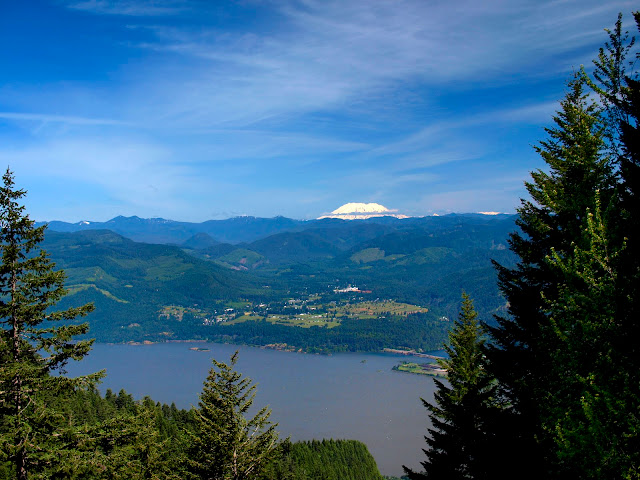 The snow-free part of the hike ended at the Wyeth (411) and Green Point Ridge (418) trail junction. The first patches of snow on the 418 appeared almost immediately and got larger as I ascended the ridge. At first there were alternating patches of snow and open ground but by 4000’ it was all snow. 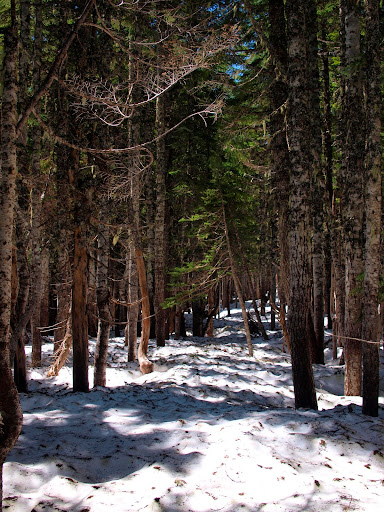 The 418, a skimpy trail under the best conditions, was gone from view within the first quarter mile. By keeping the edge of the ridge on my left, and occasionally checking the GPS, I was able to head almost directly toward Green Point Mtn. Along the way there were a few postholes (where the snow had softened near logs) and some impressive tree wells (this one is almost 6’ deep), 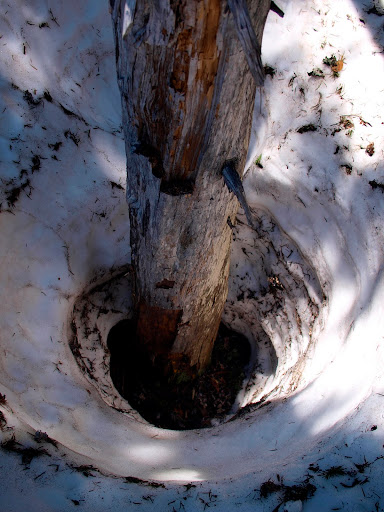 but travel was generally easy. The rewards from the summit were some excellent views of Hood and Jefferson, 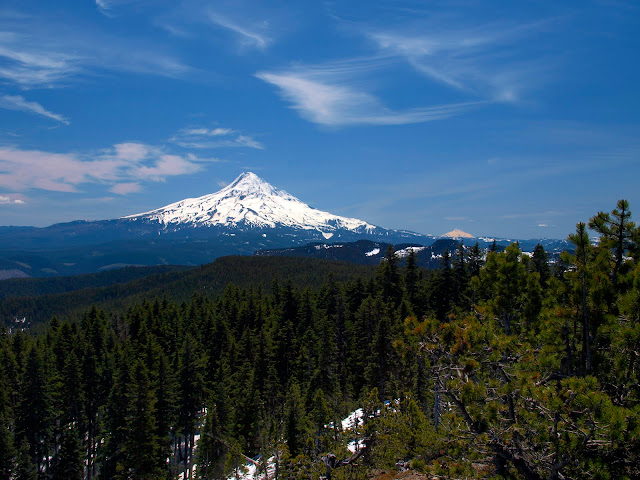 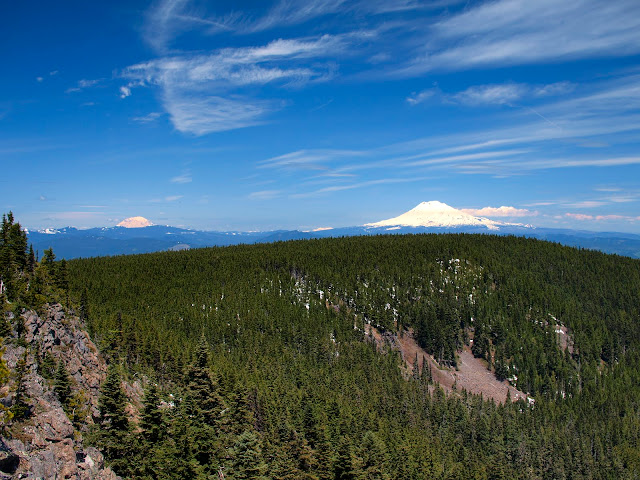 and Mt. Defiance and Rainy Lake. 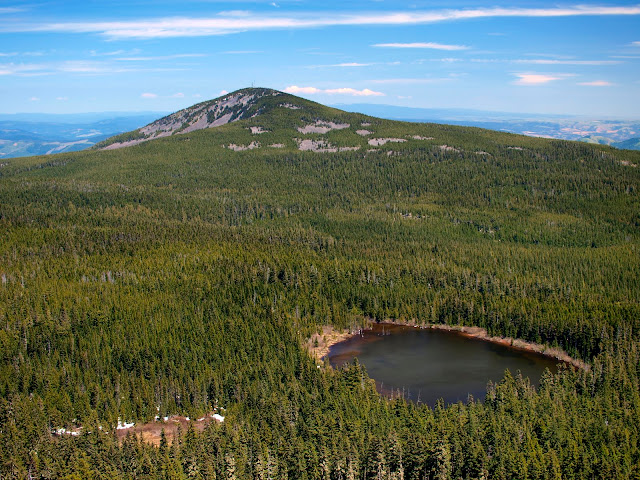 Both North and Rainy Lakes are snow-free but there’s still a lot of snow hiding back under the trees. After a brief lunch on Green Point, I backtracked and took the 423 trail down to North Lake. This trail was completely snow-covered on top, completely snow-free where it crosses an E-facing boulder field half-way down, and then patched with snow when it re-enters the trees lower down. However, since it pretty much goes in a straight line diagonally downhill, it was easy to follow, at least to the bottom of the ridge. Between there and North Lake it was in pretty poor condition, obscured by old vegetation and snow patches, and easy to lose in spots. There was some route-finding and it was slow going in spots. But North Lake was open, 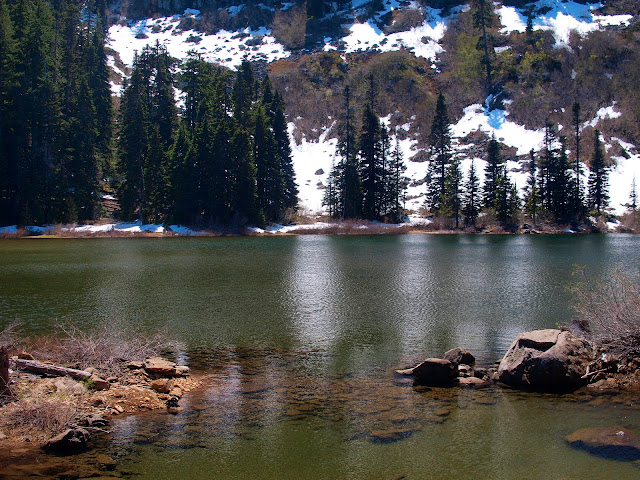 and the campsites at its N end (near the dam) were snow-free and in good condition. About half the trail between North Lake and Green Point saddle was in OK condition but the other half was covered with snow and last year’s fallen twigs and leaves. It was more slow going as I had to pay close attention to see the few trail markers and follow vestiges of the trail itself. Along the way, there’s an opening with a good view of the W face of Defiance looking (deceptively?) snow-free. 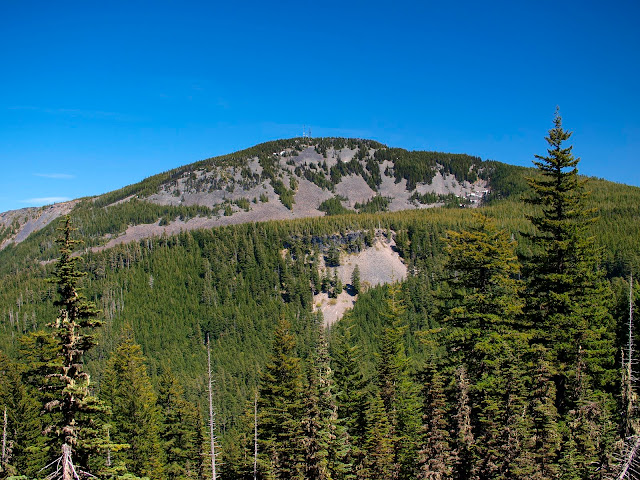 Once back at the saddle, it was an easy hike down to the TH. I only saw 5 people all day - one hiker going down and four backpackers coming up as I was heading down. Aside from the hunt-and-peck through the old snow, it was a near perfect day in the woods! Good workout too – 17 mi, 4800’.

Was up there last Saturday and that west ridge line of Defiance is snow barren, but just go in
a bit and it was 3 to 4' deep. Walked a long part of the west ridge to avoid the snow in fact...

Nice report, Van. Hurts my legs to read the stats, but I generally cheat and use the upper trailhead for that area.

Splintercat wrote:Nice report, Van. Hurts my legs to read the stats, but I generally cheat and use the upper trailhead for that area.

Thanks. Last year I drove up to Rainy Lake and hiked Rainy, North, Bear, and Mt. Defiance. Sure, I didn't earn trail cred for hauling my aging body all the way up from Wyeth, but the compensation was a lovely day really spending time at some lakes I usually have to hike right past to get back to Wyeth before dark.

I've always liked that area up there -- I've got some trail concepts that I mapped out awhile back for TKO that would create more loops and include Black Lake in the circuit (as well as Warren). It's one of the few places in the area right around Mount Hood where you have five subalpine lakes within hiking proximity, and yet the trail network almost works against trying to make that into a tour.

Thoroughly enjoyed your rich narrative and magnificent photos, especially the one of the 6 foot tree well. That was unique! Thanks for sharing. Although 17 miles is way beyond my ability level at this time on this date, it certainly gives me motivation to persevere. Happy Hiking.
Top
Post Reply
6 posts • Page 1 of 1