Because of a meeting scheduled for Friday, I had today open for a hike. Something with not too much driving, with places not previously visited, and with NO snow. I hadn’t done the Elevator Shaft route or visited Nesika Lodge, so I combined those with a hike over Devils Rest for a snow-free loop trip that was close to town. Starting early from Multnomah Falls, I followed the 400 Trail E to the where it crosses the boulder field with an old chain link fence embedded in it. A clearly visible use trail starts right above the old fence and continues up the boulder field, through some trees, and on up another boulder field. 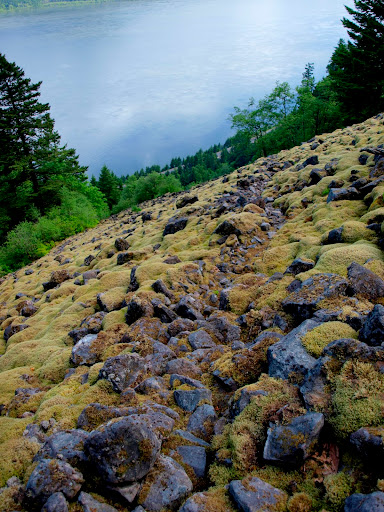 On the way up, there was a great view of Archer Mountain across the river, 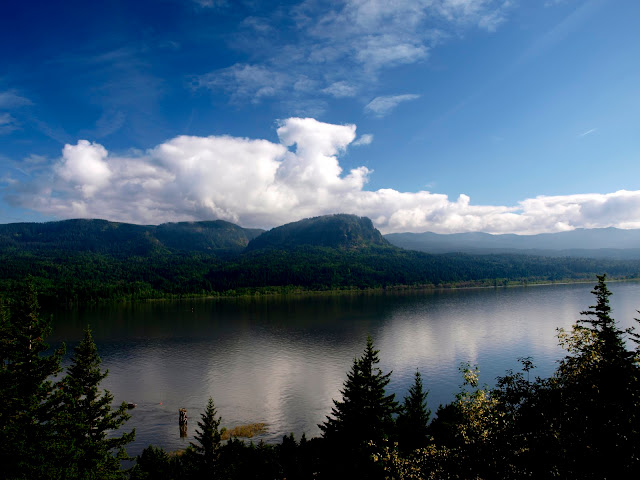 and of barge traffic on the river. Yes, it’s a steep boulder field. 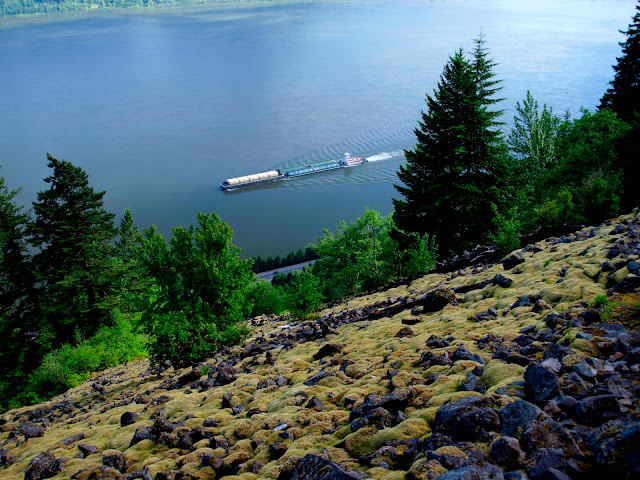 I’d expected route finding challenges, but, except for a few vague spots, the use trail was easy to follow through the boulders. Poison oak is still sprouting and growing, so it wasn’t hard to avoid it – probably not so easy later in the summer. Once the trail reached the forest at the top of the field it was even more apparent (almost like a real trail), 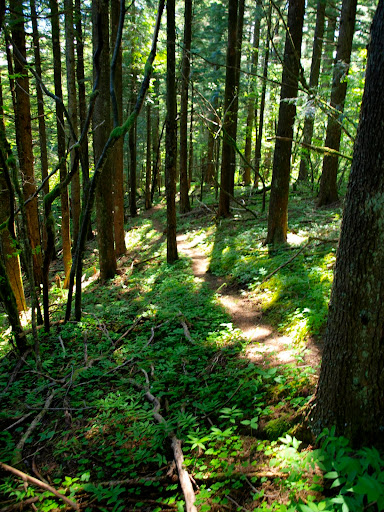 and quickly lead me to the Trail Club of Oregon’s Nesika Lodge, 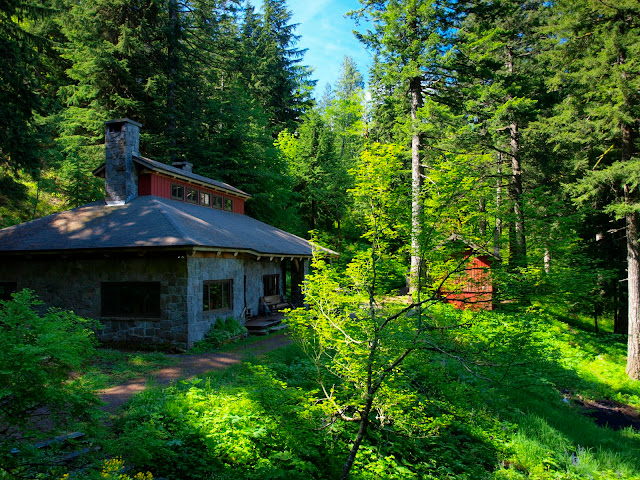 in a great location with a big view. 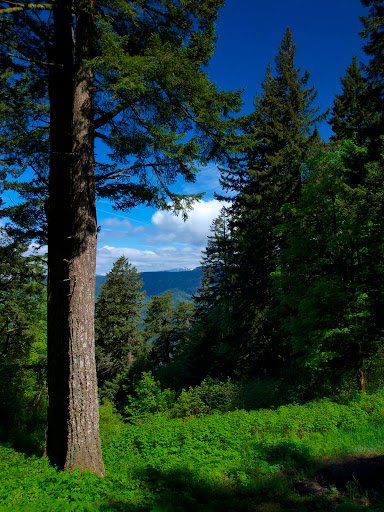 I followed a trail (not shown in the newer guidebooks) from the Lodge SE up the ridge to a junction with the Franklin Ridge (427) trail, then took that trail down to the Multnomah Basin Road, then followed the road across upper Multnomah Creek, 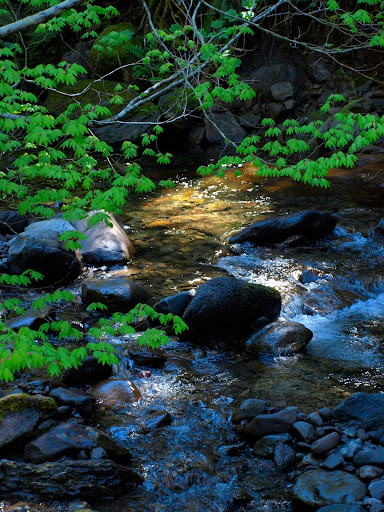 up to a cross-connect with the Devils Rest trail (420C), and then had lunch at the best viewpoint off that trail. There’s still some snow on Silver Star, 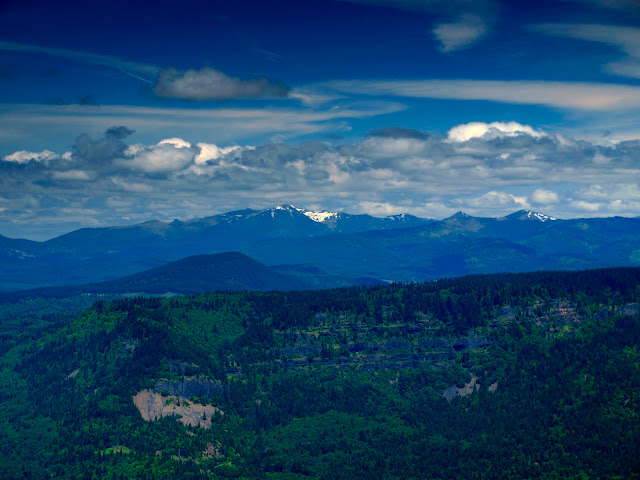 but it’s hard to tell there’s still plenty of snow off toward Tanner Butte. 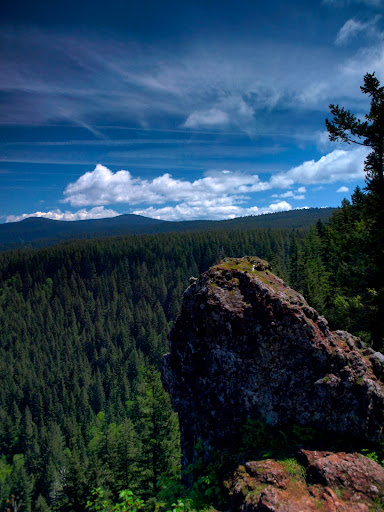 After lunch, I completed the loop by returning to Multnomah Falls via Wahkeena Spring. 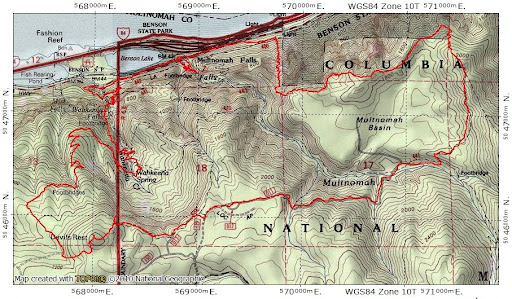 I didn’t see a soul until I reached Devils Rest but after that it was one group after another along the trail. Multnomah Falls had the usual crowds. I guess being inside after 8 months of gloom was just too much for people to bear. Good hike – 11.6 mi, 3500’ gain.
Last edited by VanMarmot on June 19th, 2011, 9:03 am, edited 1 time in total.
Top

Neat hike idea, Van -- I would have guessed more mileage, given all the dots you've connected. Love those Elevator Shaft views -- it always seems like that slope MUST be steeper than the angle of repose, but obviously... it's not... or I-84 would be under a pile of rocks! That first image is especially cool. Thanks!

Nice. Still haven't done the Elevator yet, but did do that Waespe boulder field. I love
that unmapped section of trail that head past Nesika Lodge up to the formal Franklin
Ridge trail. Must have been some nice up and downs for 3500' gain . . .
Top

It was about 2100' up to the Franklin Ridge trail, then a drop into Multnomah Creek and 900' more gain to get up to Devils Rest from there. The other 500' is accumulating small ups & downs plus whatever error is in the GPS.
Top

Splintercat wrote:Neat hike idea, Van -- I would have guessed more mileage, given all the dots you've connected. Love those Elevator Shaft views -- it always seems like that slope MUST be steeper than the angle of repose, but obviously... it's not... or I-84 would be under a pile of rocks! That first image is especially cool. Thanks!

Thanks! It pencilled out at around 13 mi but my GPS said 11.6 mi - who am I to argue with technology? And, as Don's photos about the Perdition Trail showed, sometimes these slopes do end up on the road below!
Top

Your photos are always so beautiful. Thanks for posting this.
My hikes on Went Hiking, a hiking trip logging and statistics website
Top

kylemeyer wrote:Your photos are always so beautiful. Thanks for posting this.

Thanks! Not nearly as good as some I've seen posted here, but I do hope they're good enough to inspire folks to get out and see things for themselves.
Top

I've done this hike a few times without the Devil's rest addition though. May add that next time, you are quite the traveler!

Wish I had time to do it one more time before the Poison Oak gets bad. I really like boulder fields for some reason.

Waespe Boulder field I have never heard of, where can I find it?

Waespe boulder field is another mile or so east on Gorge 400. Totally off trail and possibly uses
part of the Nesika fire escape route, but I'm not entirely convinced as it doesn't match up
when you get to the top of the field. I did a TR for it, I think I filed it under Lost/Off Trail section
of the forum. Didn't have a solid GPS at the time, but used my Android cell phone with
GPS Tracker application, so it isn't a rock solid track. I should retrack it now that I have
a soild GPS unit now...
Top

Hi VanMarmot - Great pictures as always! The Elevator Shaft must be the only place I got to before you... When you go back there, remember that after the boulder field in the saddle above Multnomah Creek you can detour right (north) to a fantastic viewpoint over the Multnomah Falls parking lot.
Some people are really fit at eighty; thankfully I still have many years to get into shape…
Top
Post Reply
12 posts