My goal for what was an absolutely bluebird day on Friday was to explore the Birkenfelds (Pts 3553 and 3763 – I think Don named them(?)) NW of Table Mountain. I didn’t take snowshoes in the belief that the snow would have “consolidated” some by now. Well, I was wrong on that one. After parking at Bonneville Hot Springs, I went up the Dick Thomas trail and then along the PCT past the turnoff to Table’s W ridge trail. Soon thereafter, S Birkenfeld came into view. 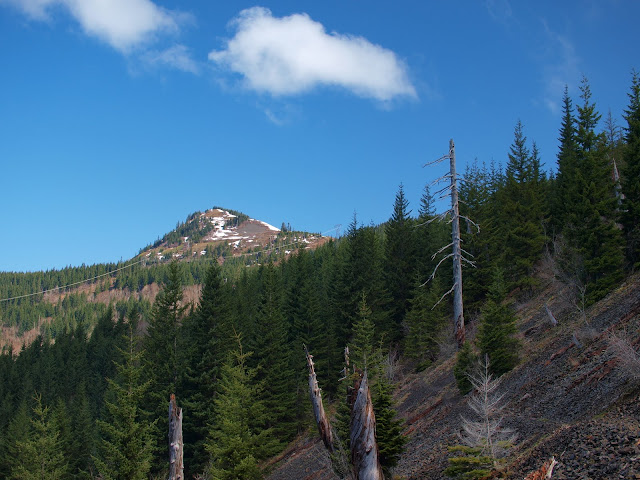 Up until now, all the trails had been snow-free but snow started abruptly at 2600’ on the PCT – fortunately it was consolidated and easy to walk over. 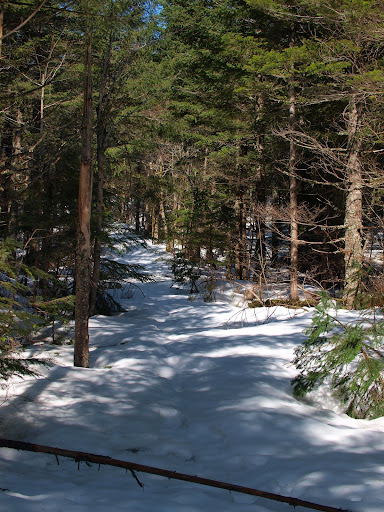 I continued on the PCT to its 2nd junction with the service road, turned left and followed the road up to the saddle between the NW ridge of Table and Pt 3353 (S Birkenfeld). I then headed straight up the ridge toward Pt 3353. Along the way I passed what looked like a group of vision quest pits just above where the PCT crosses the ridge. 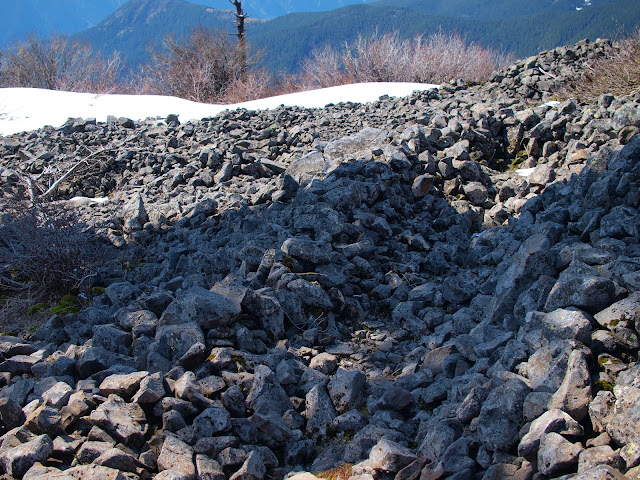 Right after the pits, I hit snow that looked great on the surface but was actually a posthole disaster – a breakable crust about 2” down, then 18”+ of soft mush, getting softer as the sun went higher. By making use of aggressive floundering and a few snow-free stretches along the ridge, I was able to proceed toward the summit. Along the way, I got good view of Table’s NW route (and Hood), 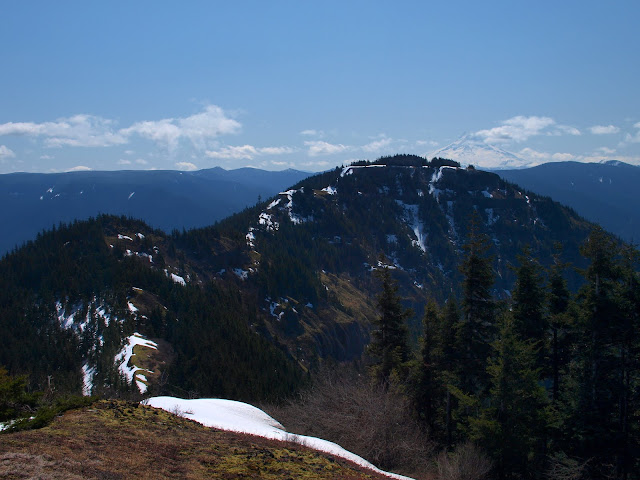 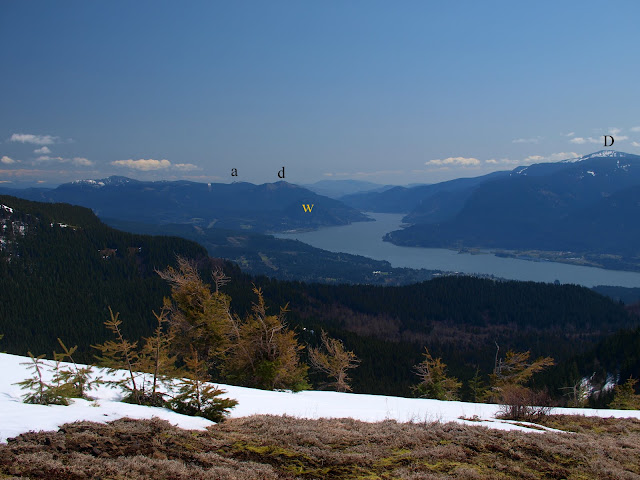 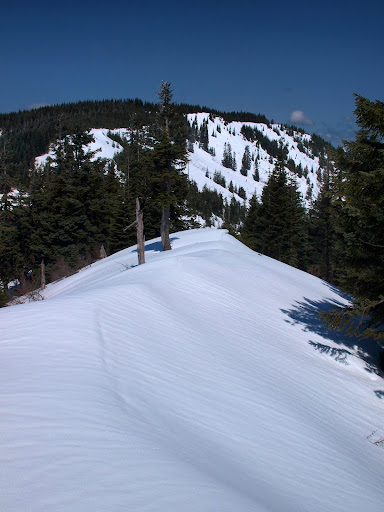 and Adams standing clear in the distance. 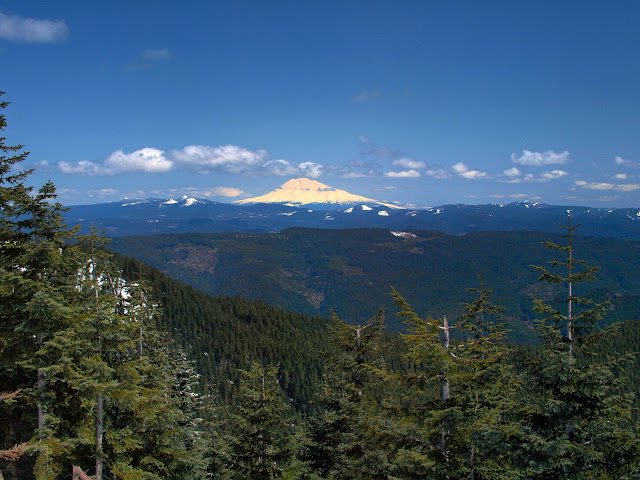 By now, I’d realized that the poor snow conditions (and lack of snowshoes) had slowed my travel time so much that a traverse to Birkenfeld was probably not practical. So I turned and dropped E off the ridge toward the service road below - glissading in spots where the soft was just too soft and deep. Along the way, I crossed the PCT, buried under 4-6’ of snow, 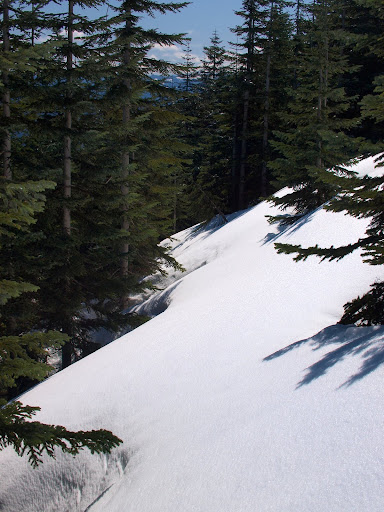 and then the service road, also with a good layer of snow. 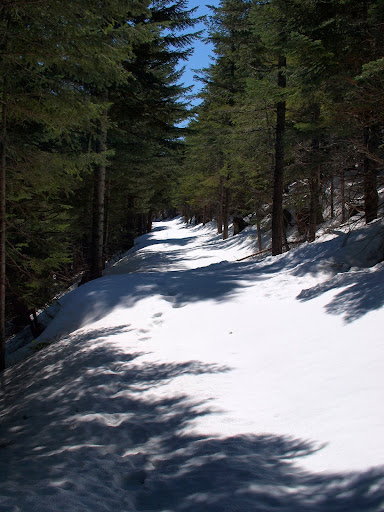 After getting back to the saddle, I decided I might as well round out my posthole experience by going over Table via its NW ridge. Back in February, the snow on the road portion of this route was not as deep and maneuvering around branches was a problem. This time the snow was so deep that 95% of the branches were buried and it was just the soft snow that was a challenge. 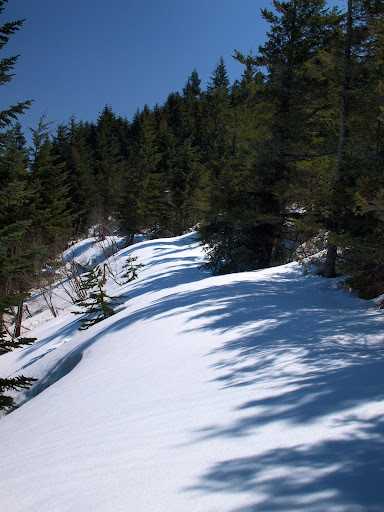 Fortunately some sections of the ridge were snow-free, 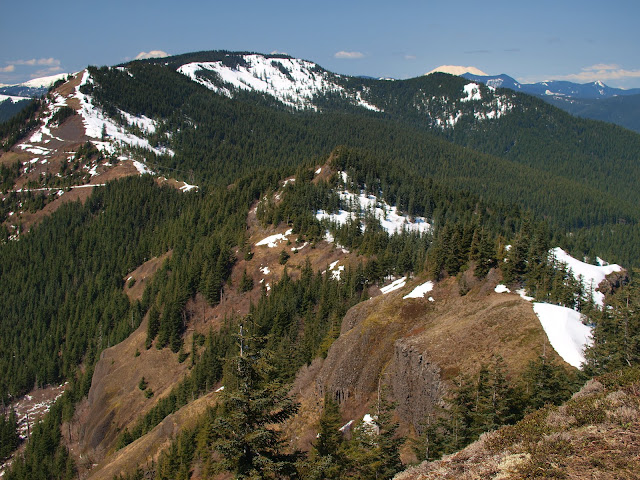 so I didn’t have to fight snow all the way to the top of Table. There was snow on Table but it was much firmer than what I’d encountered on the rest of my route and was able to form an impressive cornice. 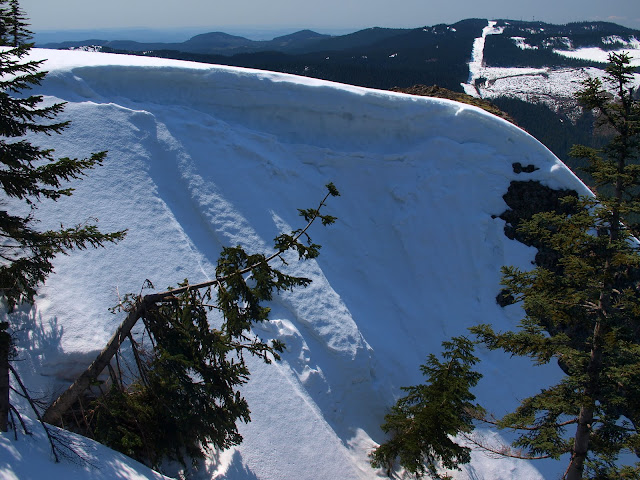 After that, it was a big view of Hood, 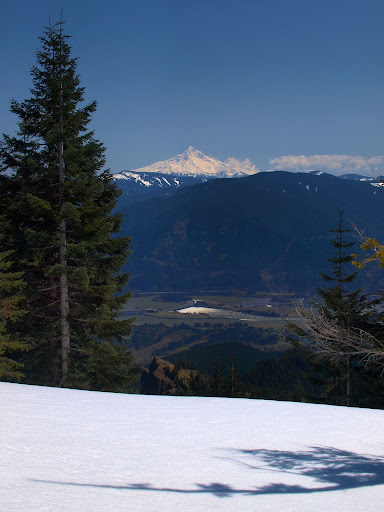 and then back via the W ridge trail, which was essentially free of snow except for a very short section near the top. All told, 12 mi and 4200’ gain under – snow conditions aside - absolutely perfect weather conditions. I only saw a few tracks and two hikers the whole day – and my tracks were the only ones on the NW ridge. The Birkenfelds are still on my list – for when the snow either truly consolidates or melts. 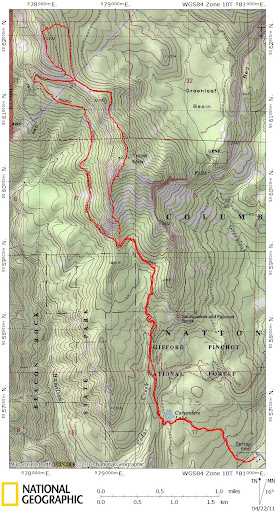 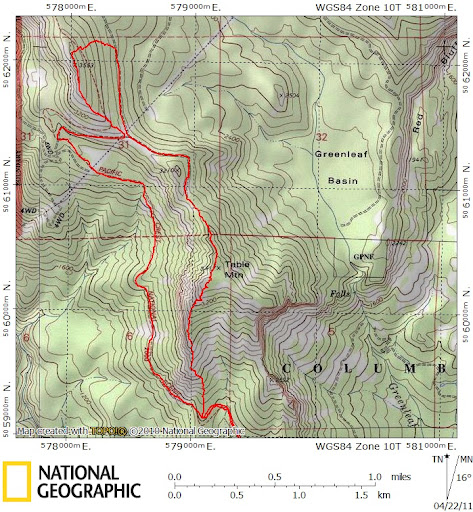 What time were you going up the NW ridge yesterday? It must have been your tracks I was following on my way down the ridge, but there were stretches where I didn't see any, or they were faint and melted-out looking, but if you were there early, perhaps the snow was hard enough that you didn't punch through the crust? I was there around 4pm and punched through pretty much every step, which was agonizing!
#pnw #bestlife #bitingflies #favoriteyellowcap #neverdispleased
Top

Bosterson wrote:What time were you going up the NW ridge yesterday? It must have been your tracks I was following on my way down the ridge, but there were stretches where I didn't see any, or they were faint and melted-out looking, but if you were there early, perhaps the snow was hard enough that you didn't punch through the crust? I was there around 4pm and punched through pretty much every step, which was agonizing!

I left Table around 2:30pm and those were undoubtedly my tracks you were following since I was the only one on the ridge that morning. I was there early enough that the snow on the PCT was still firm, as were spots in the shade along the road going out the NW ridge. But in the sun, or later in the day, it was all mush.
Top

Well, now that the date for your trip is fixed, you were there the day before me, so maybe the tracks had melted a little. Kyle Meyer also has pictures from the 22nd on the south (Gorge) end of the top of Table and there's a little snow up there that was gone by the time I got there yesterday.

There were a few times where I punched through the crust so deep that I was up to my hip in snow!

I also liked the point in your tracks on the NW ridge towards the powerline end where you clearly tried to go up to the ridgeline itself and got a few steps and turned around because the snow was so deep. I tried that a couple of times, because I could see the sun up there and knew the ridge was clear up top/on the west side, but each time I only made it a few steps before trying to slog up that snowbank became clearly more difficult than continuing to posthole my way to the powerlines...
#pnw #bestlife #bitingflies #favoriteyellowcap #neverdispleased
Top

That is a lot of hiking in snow - you sure got in your workout! Great pictures as always. Thank you for a great report.
Some people are really fit at eighty; thankfully I still have many years to get into shape…
Top

A week later (4/30/11) there are still 3 foot deep post holes up at the top but other than that... we went up without poles, snowshoes and whatever and had no problems.

Several previous attempts failed due to being too out of shape, starting too late or pick-your-favorite-excuse. VERY pleased with ourselves this go around... Now, it's on to the rim of Mount Saint Helens.. a pretty much unthinkable hike for me two years ago.

Hi Easyrider, Congratulations on making it to the top of Table Mountain, that has been on your wish list for a while. Even more important, you have kept your weight low over the winter so you are ready for lots of other hikes as the snow melts! Well done.
Some people are really fit at eighty; thankfully I still have many years to get into shape…
Top

I played a bad card today (5/13/11) hoping that most of the snow had either melted out or consolidated enough to walk on for the north approach to Table along the PCT.

awildman wrote:I played a bad card today (5/13/11) hoping that most of the snow had either melted out or consolidated enough to walk on for the north approach to Table along the PCT.


Bummer. There's a whole lot less snow than there was on 4/23, just more snow then there should be on 5/13. We're spending next week hiking in Utah - maybe the snow here to be gone when we get back?!
Top
Post Reply
11 posts