I (and perhaps many other hikers) had been fantasizing what I’d do if a sunny day materialized. For the last two months this has seemed an impossible dream but today, finally, that dream was realized. The Coyote Wall / Catherine Creek area beckoned, so I headed out there with a plan to make a loop between these two popular hikes. It was cloudy/foggy when I left Portland but at the Catherine Creek TH all was sunny. 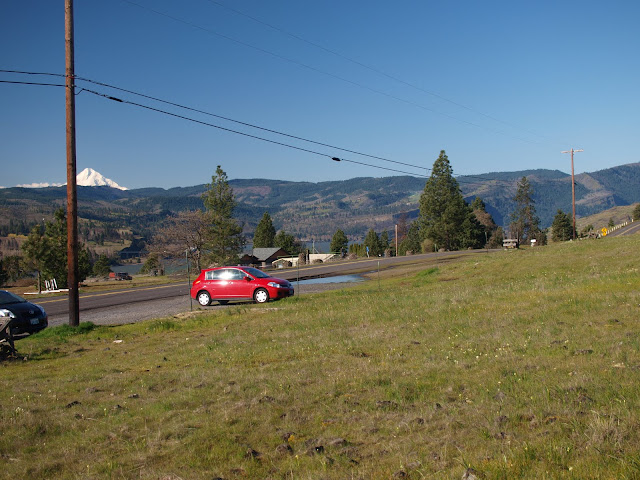 It felt odd not to be pulling on an extra layer and rain gear but I fought off that urge and headed W toward Rowland Ridge and Coyote Wall. After about 0.75 mi I came to a boulder field, 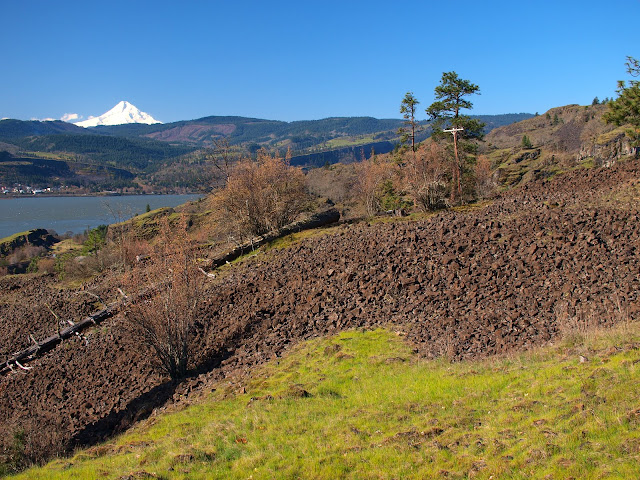 with numerous vision quest pits in it. These are mentioned in Sullivan’s guide but not Lorain’s. 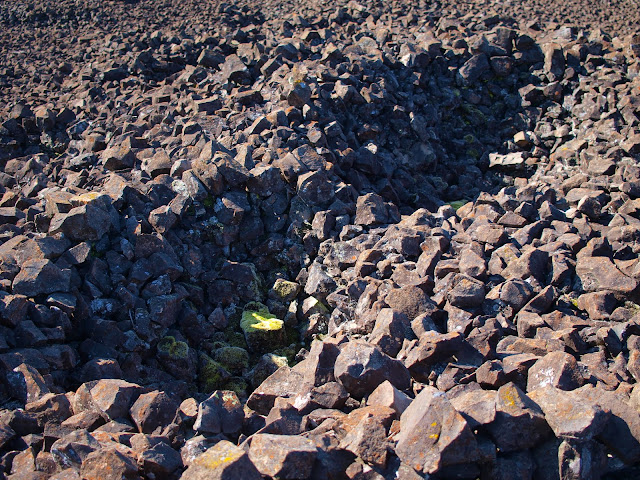 The only problem with this area is that getting to it involves a lot of poison oak – not too bad now as it is just stems (but still toxic) but when they leaf-out, be careful! Not having tried this loop before, and wanting to hit the bottom end of the Coyote Wall trail, I maybe did not contour as high as I could have above Rowland Lake. Ultimately I had to use a bit of the road to get around the lake. After that, I headed up a ramp on a game trail to lose the road and regain the outdoors. 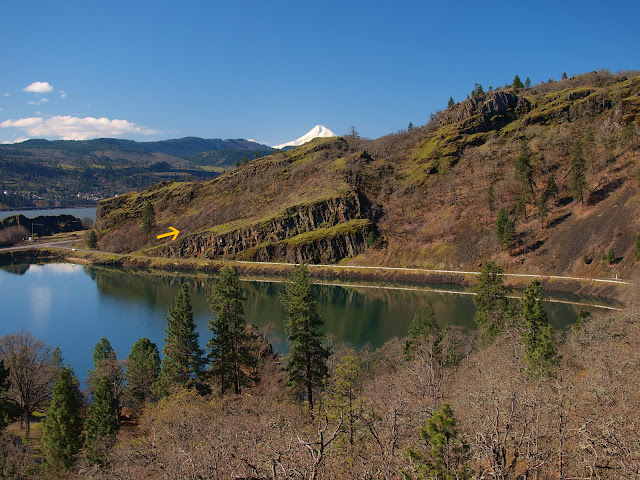 I soon hit a more prominent use trail that made travel easy. 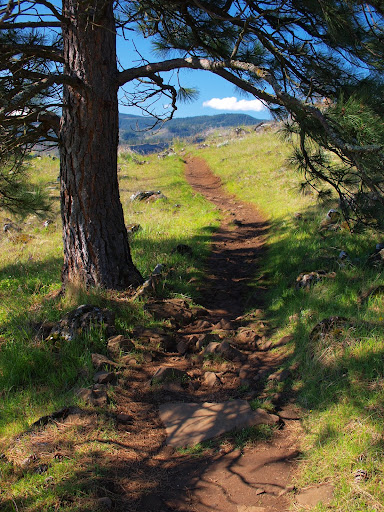 Thanks(?) to all the recent rain, there are little ephemeral pools tucked in pockets all along the trail. 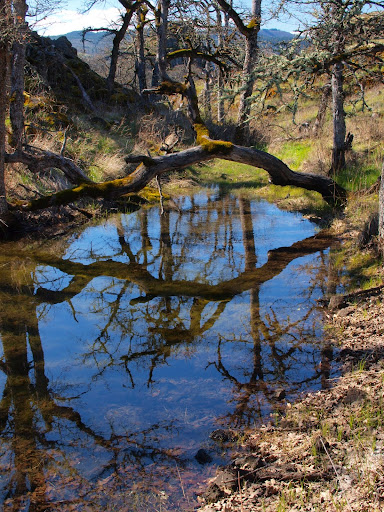 There is one major creek that drains the slopes E of Coyote Wall, but it came equipped with a handy log bridge. 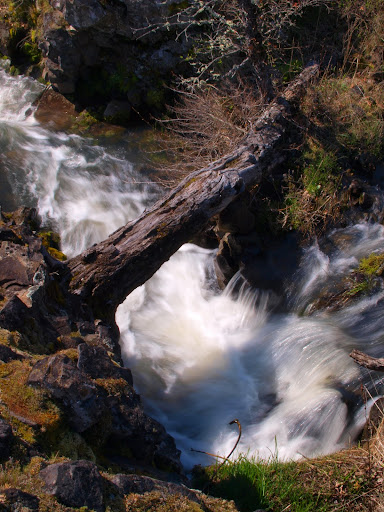 I had to do a little back tracking to get around Coyote Wall and on to the trail below but soon I was on the side trail (“Wizard Trail”) that goes to the top of Coyote Wall. I used DerWanderer’s trip report and photos to verify the turnoff – which is flanked by 3 logs and some pink tape. The trail wanders through the woods and rocks for a while then climbs steeply to the top of the wall. 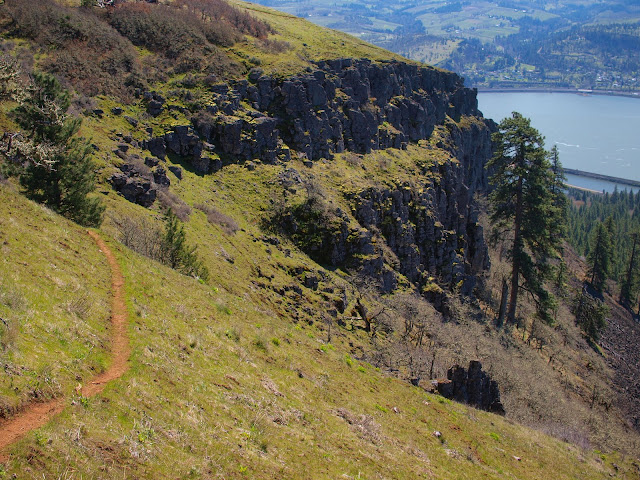 There’s an old 4WD road – now mostly a trail/bike track – that goes from Coyote Wall all the way back to Catherine Creek. I eventually connected with it after wandering past a vineyard and maybe on to some private property. I should have swung a little lower from the top of the Wall before heading E. This old road contours at about 1400’ and provides many, many big views of open vistas. 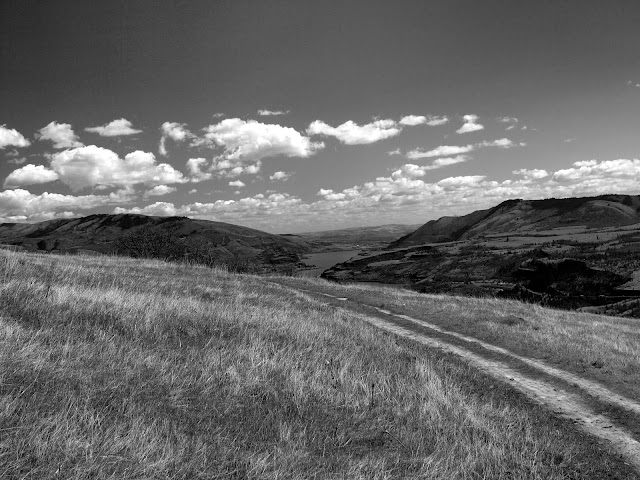 Not having seen it in so long, I had to stop myself from shooting picture after picture of sunny, rain-free, blue sky. 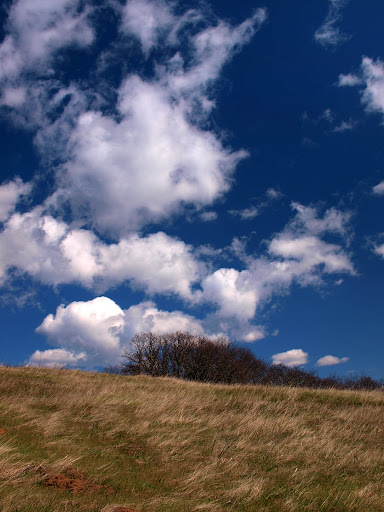 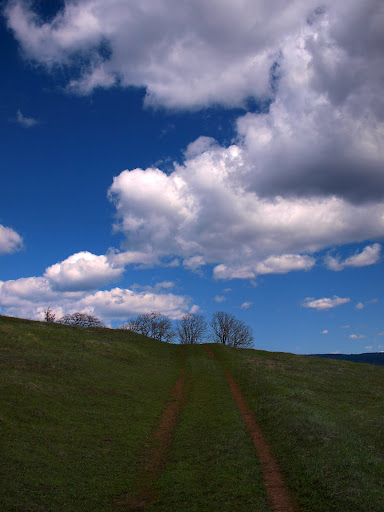 The old road eventually connects, near the head of Catherine Creek, with another old road that heads down, paralleling the creek, back to the TH. 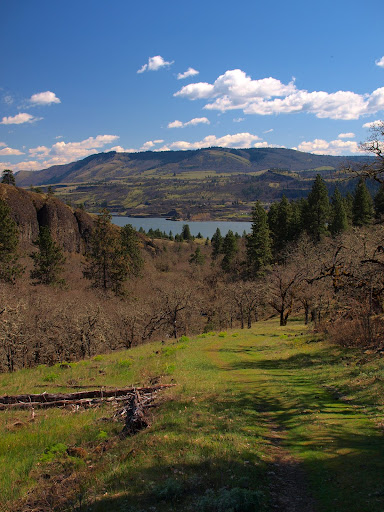 Along the way, I got a view of the natural rock arch above Catherine Creek. 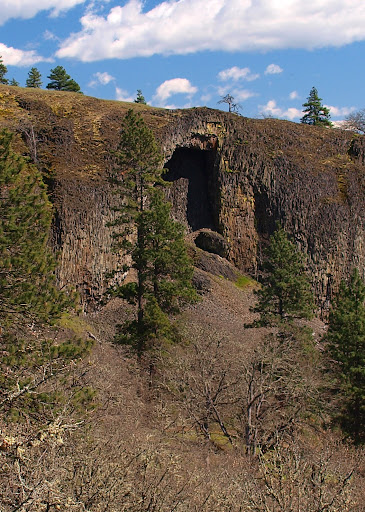 Shortly after that I was back at the Catherine Ck TH. Mine had been one of three cars when I arrived – the lot was nearly full when I got back. I guess I wasn’t the only hiker suffering from cabin fever. New trail (for me), a little exploring, blue sky, sun, light wind, no crowds (once I was 1000’ beyond the TH), and no ticks (on me at least) – it just doesn’t get any better. 10.8 mi, 1600’ gain. 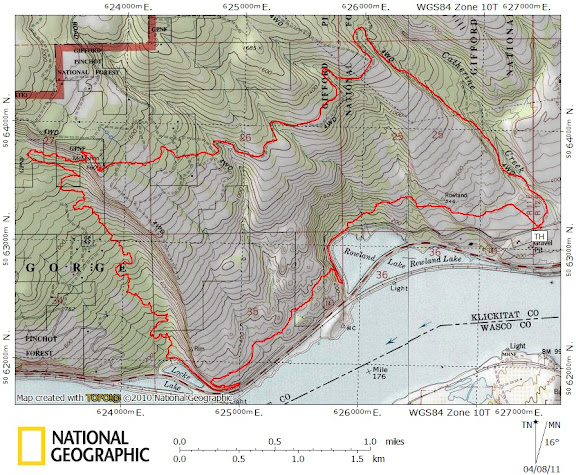 Looks like a nice loop (all but a road part) and fantastic weather. I like this area because with all multitude of trails it never feels crowded - except the trail along the wall rim. I want to make a similar loop in the area, though it would mean brushing my dog from ticks for the rest of the day.

You used a road about 230' above the one where we got stopped by a sign. I saw bikers use it, maybe it's some way around private property. Looks like a very good connector way to Catherina area

I don't recall any logs on lower Wizard trail junction - may be a recent improvement? It makes finding trail easier.
Top

Great photos! I love #'s 5 and 6. I haven't been to Catherine Creek in years...maybe it's time to head back!
Tyler Mode
http://www.naturespixpdx.com
Top

Nice photos! We must have left the trailhead shortly before you arrived--we were the first car at the Catherine Creek parking area that morning. We followed the ridge above Major Creek and explored the high meadow area before heading over to the Catherine Creek gorge for the return leg. What a great day! It made me remember all the things I'd been missing the past few weeks--between the weather and an episode of plantar fasciitis, I was feeling quite shut in.

I've hiked at both Catherine Creek and Coyote Wall, but I have yet to make a loop combining them. I'll have to give it a try one of these days...the views look really nice.
John

In my many loops in the area, I generally avoid going so low as it tends to force you back on to the road. Did you use old Hwy 8 to get across lower Coyote Wall? Looks like it on the map.

Also, look at that western-most lobe of your route, below the steep Wizard Trail section (upper left section of the loop). There is a shortcut that drops straight down through moderate XC that avoids walking on the bike trail. It's not marked and for the most part it is just XC. But it's only a couple hundred yards and is not too steep or brushy.
Top

Didn't see mention or evidence of flowers. Is there anything going on?
PaulGerald.com
60 Hikes Within 60 Miles of Portland on Facebook
Paul on Twitter
Top

We were there too yesterday, it was wonderful to have the sun on my face for a change.
Filling my bucket, one hike at a time.
Amanda
Top

OneSpeed wrote:Didn't see mention or evidence of flowers. Is there anything going on?

There were a few flowers starting to show but not a huge number. Probably 1-2 weeks(?) from the big show.
Top

drm wrote:In my many loops in the area, I generally avoid going so low as it tends to force you back on to the road. Did you use old Hwy 8 to get across lower Coyote Wall? Looks like it on the map.

Not having done much hiking in this area, I was feeling my way through this loop and so got forced down to the road E of Rowland Lake for a short bit. Looking back I could see how I might have gone higher, but this would have conflicted with my desire to start hiking the Coyote Wall trail from the bottom. I used old Hwy 8 to get around the lower Coyote Wall - couldn't see any alternative that didn't involve flying.
Top

I really like the "ephemeral pool" photo (#6) and the black and white of the gorge. Well done!
Rambling on at Allison Outside
Top
Post Reply
12 posts