March is doing its very best to enter the record books for total rainfall and consecutive days of rain (and continually less than optimal hiking conditions). I’m doing my best to keep hiking regardless so that summer (should it ever arrive) doesn’t find me as an out-of-condition blob. Short-term forecasts indicated a break between fronts this morning so I took that as THE opportunity to squeeze in a short hike up to Nick Eaton Ridge, with a return via the cutoff trail and Gorton Creek. There were rain squalls along I-84 but none at the Herman Ck TH, and things remained dry up to 2000’ on the Nick Eaton Trail (#447), where snow first appeared on the trail. There was even a “sun break” (of sorts) for encouragement. 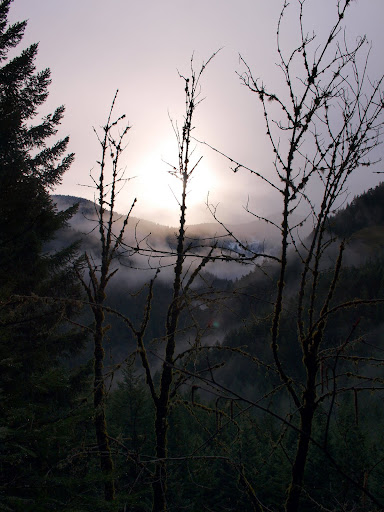 A little higher, more snow on the ground, and then it started snowing – which, combined with the old frozen snow that was falling off the trees, made for quite a pelting with various types of stiff water. 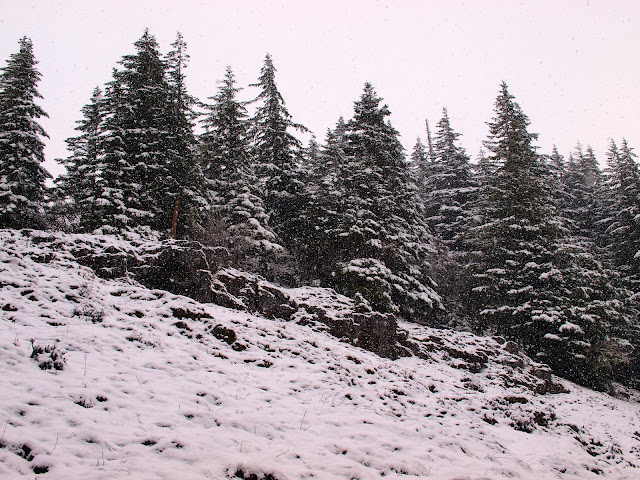 Up to the cutoff, the snow never got very deep on the trail and there was no need for snowshoes or traction devices. 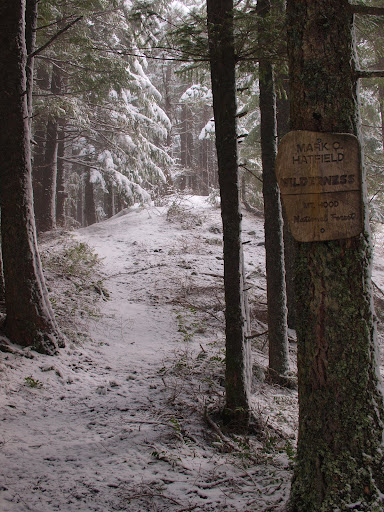 I was wondering about the fresh “dog” tracks when it dawned on me that mine were the only human tracks in the fresh snow – there was no person with a dog ahead of me! Maybe bobcat? Nice kitty? 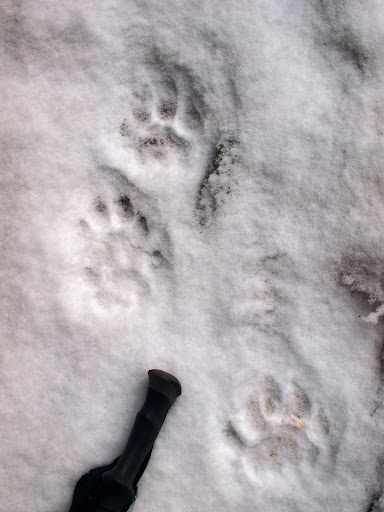 The ridge cutoff trail (#437) had more snow on it but, on the track at least, it was over a well consolidated base of frozen foot prints. 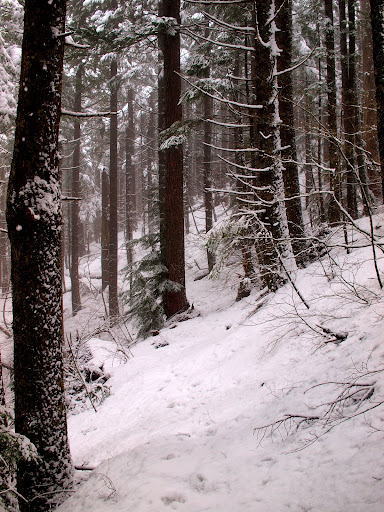 However, if I stepped off the packed trail I went at least knee deep in soft snow. My guess is that higher up, without a packed trail, snowshoes would be essential. By the time I reached the Gorton Ck trail (#408), the it had stopped snowing, and I thought about going out to Indian Point, but there didn’t seem to be much point to that since the views were nil. 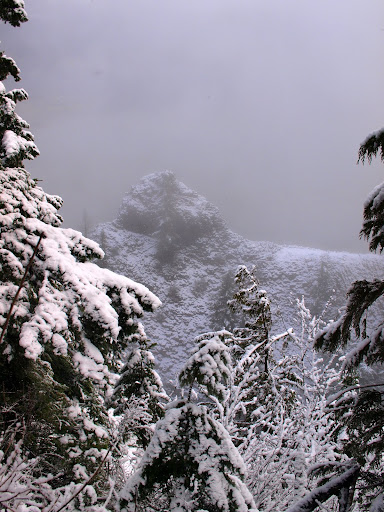 Just a short distance down the trail from Indian Point (at about 2400’ or so), the snow mostly disappeared and I almost thought it really was Spring. 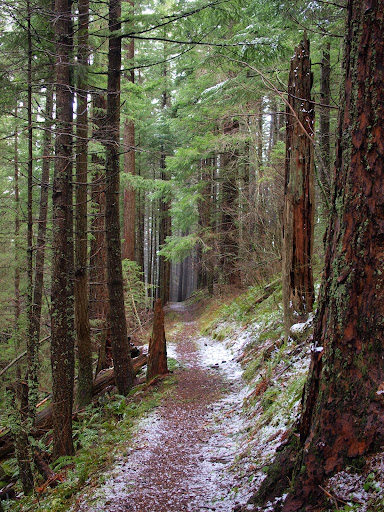 Overall, a nice little hike (8.5 mi RT, 2900’) to keep the joints flexible. The weather wasn’t great but I didn’t get hit with walls of water either. This is one place were the actual trails (and probably the guidebook mileages) deviate impressively from those on the map!

Nice report and pictures! I don't think I've ever seen this loop, I've done Nick Eaton though. Thanks for the info!
Tyler Mode
http://www.naturespixpdx.com
Top

Awesome, was looking for a shorter hike near Cascade Locks on Sunday morning before a
family Charburger meet up and this might just fit the bill!

Ok, did this one this morning super early. Arrived to the TH at about 6:15 and walked up
past the Herman Creek work center gate and got a move on. Nice and snowy once again
above 2500'.

A friend and I looked at your photo of the tracks from your hike along Nick Eaton Ridge and have this assessment:

Yeah, you are on the right track, it is a cat, but waaay too big to be a bobcat, since their tracks are around 2x2 inches or so, sometimes a bit bigger than that. I take it that is a ski pole in the lower left, and using that for scale I can tell that these are more like 4x4 inches, maybe a bit more.

The bottom two tracks are actually two tracks, a hind and a front, on top of each other, but not perfectly on top of each other, those are called indirect registers. The one at the top is a lone track. Some things that give it away as a cougar: 4 toes, the track is not symmetrical, the heel pad is "chevron" shaped, or it looks like in "M", with three lobes on the bottom and two on top and size. If you look at it it looks like a fat M, some folks remember M for meow, or feline, since all cat heel pads are this shape. It's a bit hard to tell from the picture but I would say that top track is a right hind foot.

Nabor J wrote:Van Marmot,
Yeah, you are on the right track, it is a cat, but waaay too big to be a bobcat, since their tracks are around 2x2 inches or so, sometimes a bit bigger than that. I take it that is a ski pole in the lower left, and using that for scale I can tell that these are more like 4x4 inches, maybe a bit more.
Nabor J / Outdoor Viewfinder

Thanks for the analysis! Yes, that's my ski pole handle - only "scale" I had handy. Cougar! Cool! These tracks headed down the cutoff trail for about 100m or so, then disappeared, then appeared again lower on the Gorton Ck trail, then disappeared again. All very fresh that morning - couldn't have been more than a few hours old.
Top

Do cougars eat marmots?
Rambling on at Allison Outside
Top

Only slow marmots far from their burrows...
Top