The weather report wasn’t optimal but there was new snow above 1000’ and I really wanted to get a little more use out of my snowshoes this season. So I thought a loop over Table Mountain might give me a chance to use the shoes and get the requisite views. Starting from Bonneville Hot Springs, I headed up the Dick Thomas trail, past Carpenter Lake, and on up to the PCT only to find no snow! 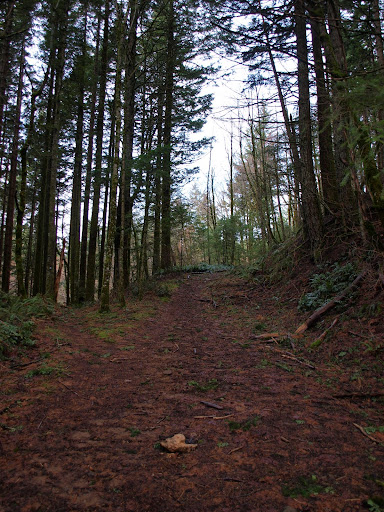 But I could see snow from Hwy 14! Fortunately, the first dusting of snow started right after the PCT crossed the road for the last time and had reached a depth of 6” by the time the PCT turned N just W of Table Mountain. 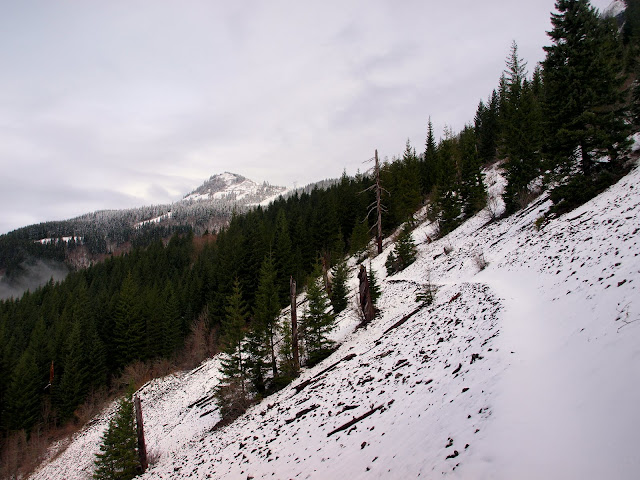 The snow kept getting deeper and I strapped on the shoes at about 2200’ [I won’t say you “need” snowshoes for this hike with this snow but it’s way easier with the shoes]. I was plowing through 18-24” of soft fluffy new snow by the time the PCT passed under the powerlines. It was less deep in the trees, but deep enough in the open to almost complete cover the old logging structure at around 2800’. 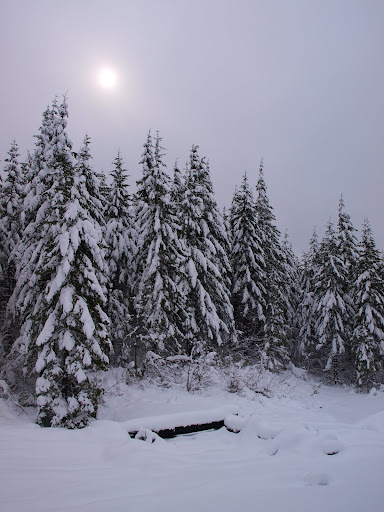 The road up to the saddle on Table’s NW ridge was covered with about 12” of new snow but since it was out in the open, the going was easy. 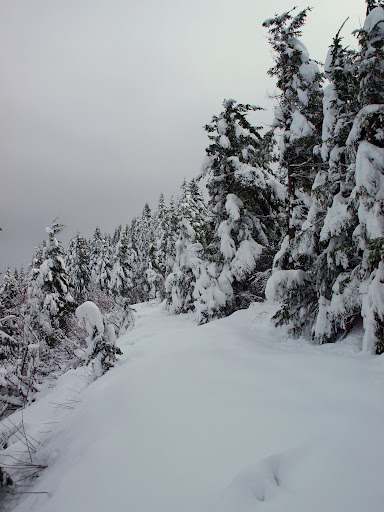 The same could not be said for the old road going out the ridge toward Table as it was an obstacle course of deep snow, deep hollows formed by snow roofing over bent vegetation, and trees holding snow soon to be heading down my collar. I definitely have to get back here in the summer with a saw. The whole ridge was covered with up to 24” of new snow and, although sidehilling and getting tangled in brush was a pain, I really needed the snowshoes to make progress along the ridge. Enroute I got a nice view E toward Dog (also with new snow), 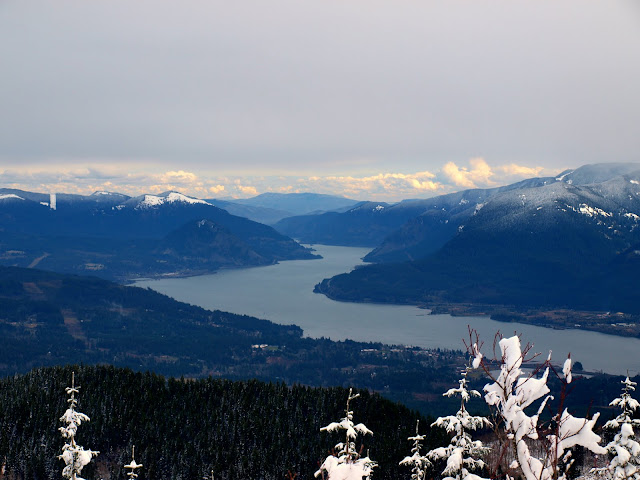 and of Greenleaf (which shows how abrupt the snowline is in this part of the Gorge). 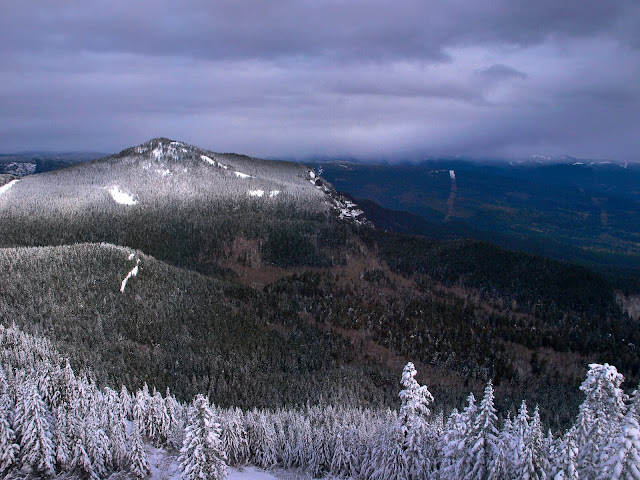 As I got closer to Table, there was less brush to thrash through and I got to experience the aerobic wonders of heaving snowshoes uphill through deep powdery snow. 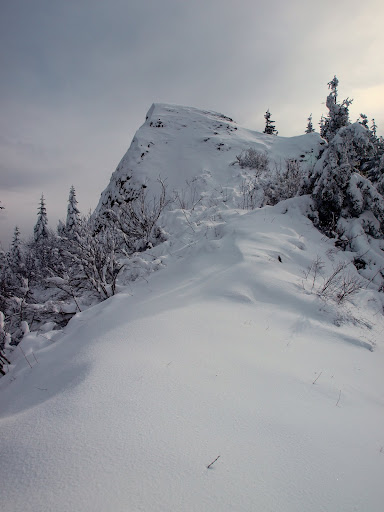 I was worried that the last climb on the ridge before the top – the steep narrow part with the big drop off – would be a bit dicey given all the new snow but it wasn’t – just steep and extra aerobic. 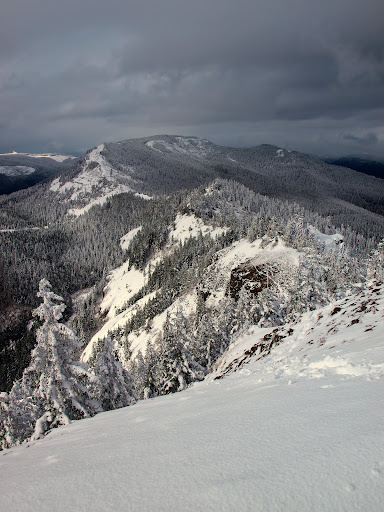 Clouds pretty much killed any views of Adams or Hood, but I was nonetheless rewarded with a trackless view of Table. I guess I got out soon enough after the last storm to beat the crowds because rarely have I been on Table without seeing and/or following someone else’s tracks. 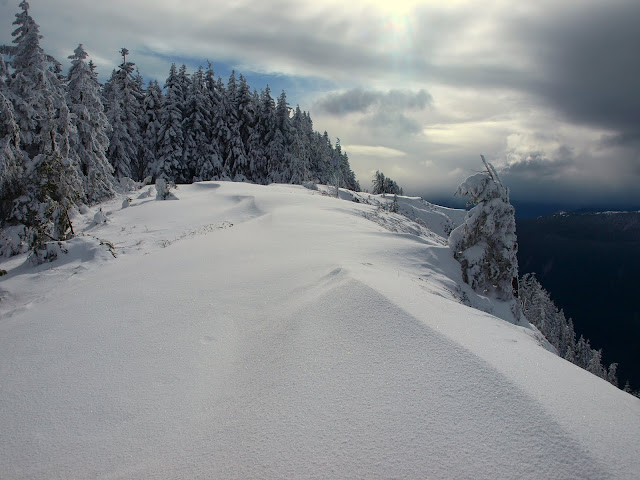 I headed down Table’s W ridge and took the snowshoes off just after the ridge breaks out of the trees. The snow was still deep but it was easier to descend without two boards strapped to my feet. The snow basically didn’t disappear until I entered the trees at the bottom of the ridge. After that, the trail was essentially snow-free all the way back to the TH. About 10.5 mi, 3400’ – lots of fun - but with the snowshoeing it was definitely more exercise than I get on a summer hike of Table. 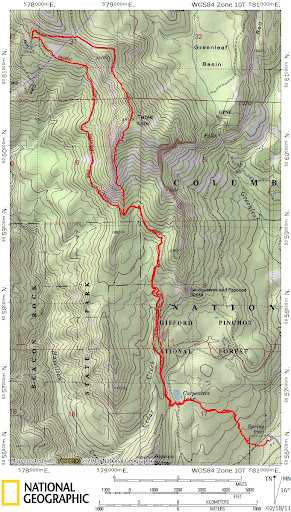 Nice job and great photos! We should get together and take care of that nasty stretch of slide alder on that last half of the ridge north of Table. Is that a mess, or what!

Man, i was planning to head out to Table tomorrow early. i wonder what my chances are without snowshoes on getting to the top. Looks like it got dumped on. Well if not i want to check out some other stuff in the area. Last time i was there couple of weeks ago i noticed a trail going south from the pacific crest trail and west ridge intersection. Looks like you can follow it down to cedar mt. and aldrich butte. Anyways, nice pictures as always.
Top

Hi VanMarmot. I think I saw your bootprints today. I was running around in the area this morning and saw a single set of bootprints on the PCT heading north after the snow started. I was surprised they didn't go up the Westway trail. That is where I turned back because I was in my running shoes and had another "errand" to do in the area.
Top

Beautiful shots. I especially like the one looking east over the Gorge.
www.blurb.com/user/chameleon707
Top

Don Nelsen wrote:Nice job and great photos! We should get together and take care of that nasty stretch of slide alder on that last half of the ridge north of Table. Is that a mess, or what!

Yeah, that short stretch sort of drains the fun out of what is a great alternative way up or down Table. Can you get up near there by car once the snow clears or is this a "carry the saw" up the mountain situation?
Top

Don Nelsen wrote:Nice job and great photos! We should get together and take care of that nasty stretch of slide alder on that last half of the ridge north of Table. Is that a mess, or what!

Yeah, that short stretch sort of drains the fun out of what is a great alternative way up or down Table. Can you get up near there by car once the snow clears or is this a "carry the saw" up the mountain situation?

Yes, but whether you need 4wd varies from year to year. It's rough and rocky in a few spots but the road is mostly pretty good.

The ATV crowd worked that section over a few times in years past but I haven't seen their handiwork for two or three years so it's getting overgrown again. The trees spring back when the snow melts so it's only a problem once the snow bends them over.

Don
"Everything works in the planning stage".
Top
Post Reply
8 posts • Page 1 of 1