Facing a weekend of rain, I took yesterday as a sick day (I think of it as a “health” day) to check out the snow conditions on Mt. Defiance. The weather forecast promised a bluebird day and that’s what I got. It had been cold enough in the Gorge to ice-up parts of I-84 and I passed two wrecks on the way to the Starvation Creek TH. My car was probably the only one in the lot most of the day and the recent report of a break-in at this TH was in the back of my mind. I like the Starvation Ridge trail because, unlike the other trail to Defiance, it has views. 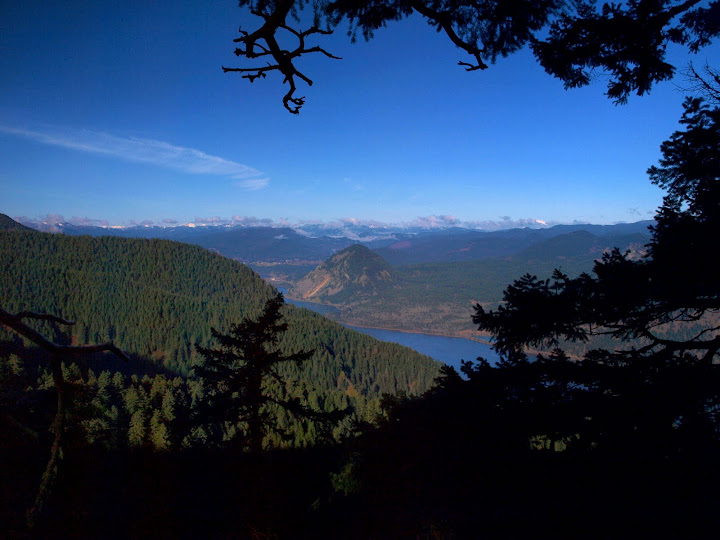 The trail was in good condition and free of snow up to about 2700’ when a light dusting of 1-2” appeared. Where the trail crosses the boulder field and old clear cut at around 3300’, the snow depth had increased to 3-4” over a hard base. 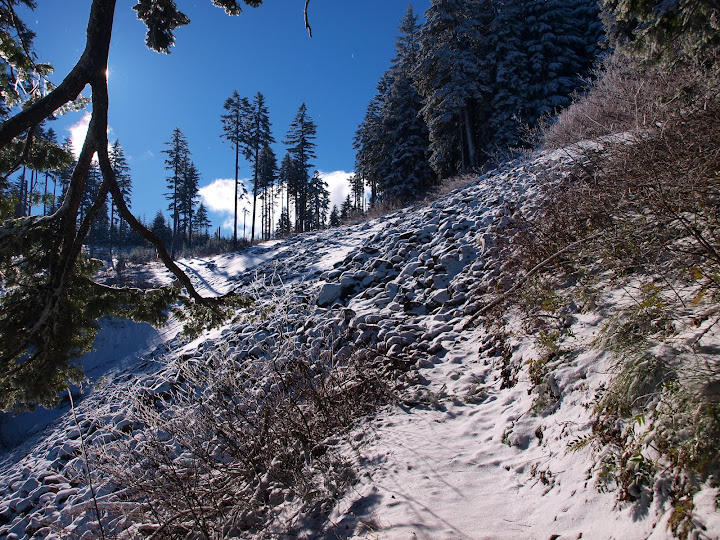 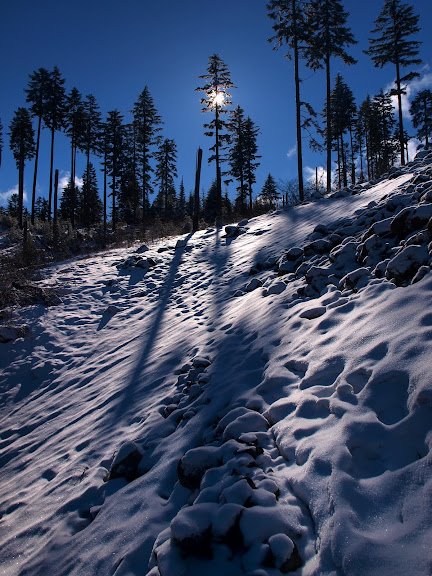 The new snow was very light and fluffy and never got deeper than 6” even on the summit. Sitting as it was over a solid base of either dirt or heavily consolidated old snow, it was very easy to walk on. The trail was in great shape all the way to the summit, with no significant blowdowns or other obstructions. Warren Lake was frozen over but the ice wasn’t that thick - definitely not something you’d want to walk on. 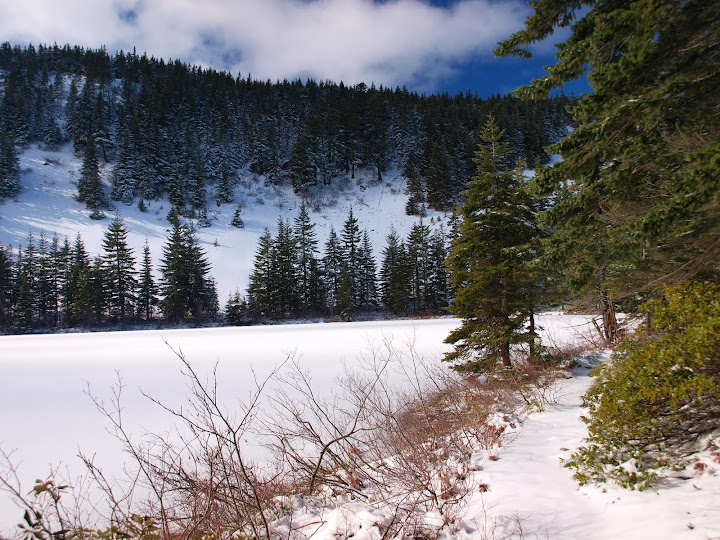 Up until the lake, the trail was very visible through the snow - after that there had been sufficient snowfall and wind drift to hide the trail, so I just headed up slope to intersect with the service road. 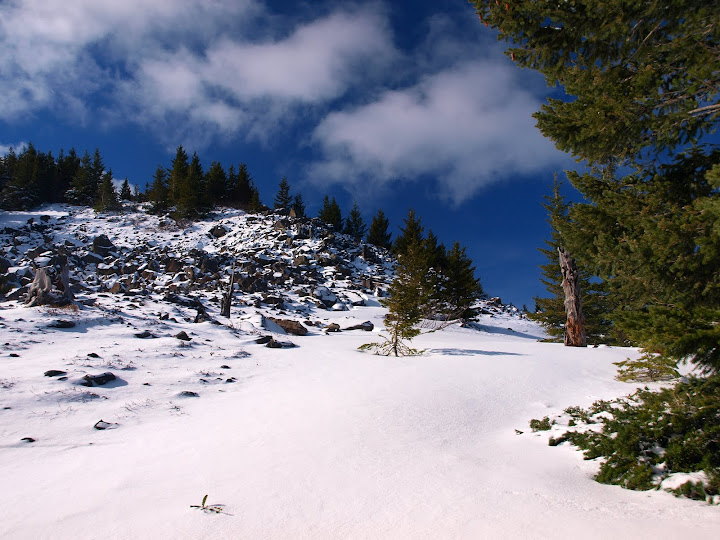 Enroute, I had a view of myself, 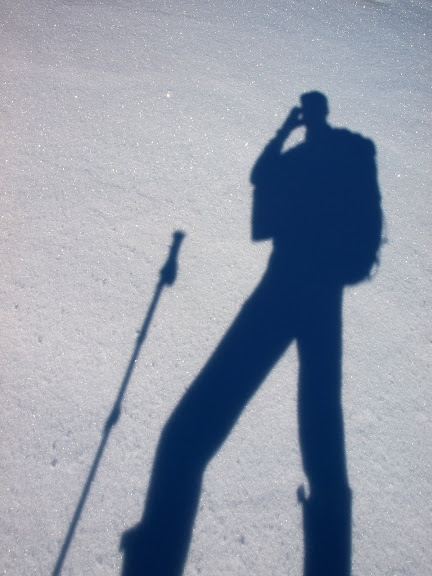 and of Adams and Rainer (St Helens is just out of the picture to the left). 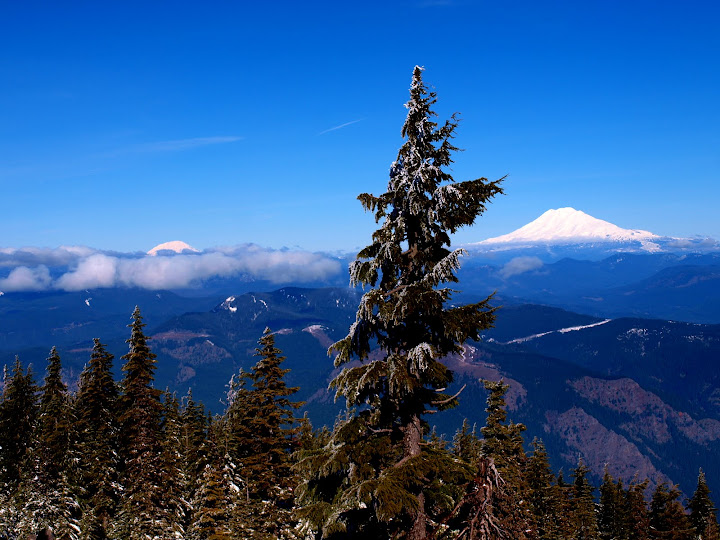 Mine were the only tracks on the summit that day, 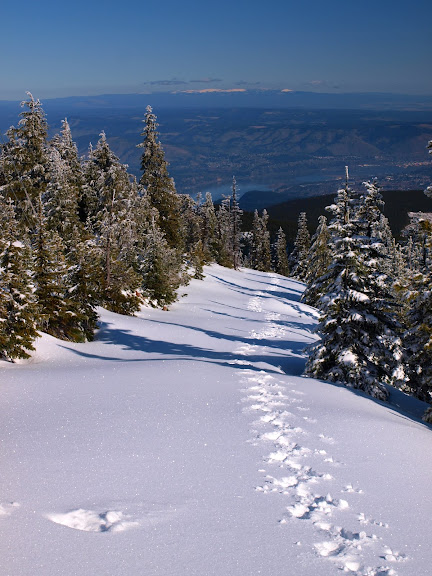 and I was rewarded with my first iconic view of Hood for 2011. 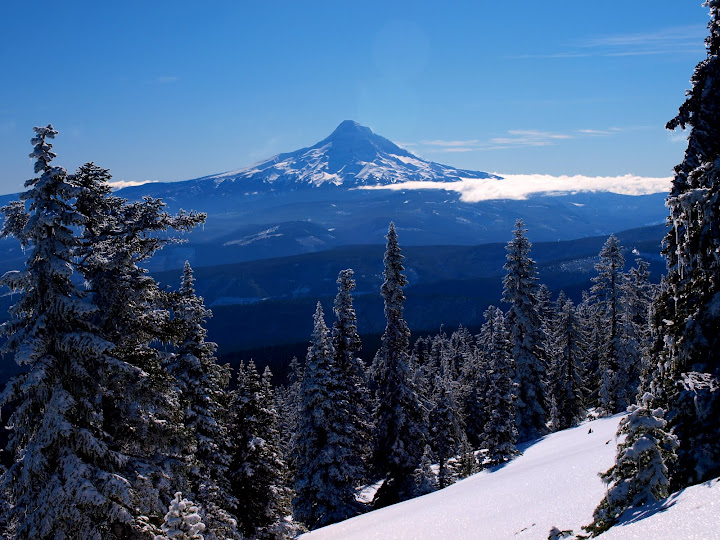 The air temp was cool but there was almost no wind and it was warm in the sun. Large chunks of ice had built-up on the guy wires and antenna structures and were being loosened by the sun - so my summit lunch was serenaded by loud crashes of falling ice and the occasional piece of ice shrapnel. The chance to walk though the woods on fresh untracked snow was just too much of a temptation, so rather than descend via the Defiance trail or retrace my steps exactly, I decided to return via the service road and a spur to that road which reconnects with the Starvation Ridge trail E of Warren Lake. 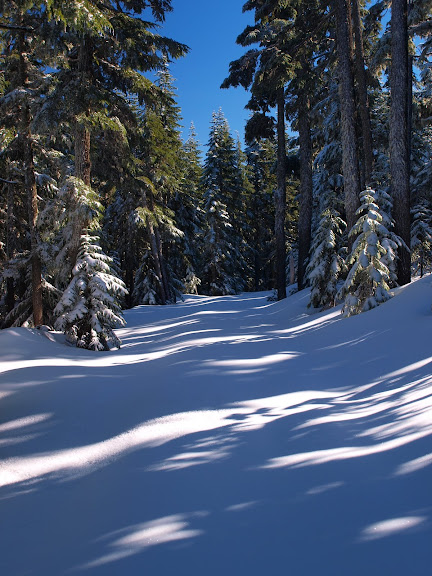 After that it was back down Starvation Ridge to the TH to find my car undamaged. One of the Gorge’s classic hikes on a wonderfully sunny day in February - definitely good for my health!
Last edited by VanMarmot on March 2nd, 2016, 4:46 pm, edited 1 time in total.
Top

Wow, those are the most beautiful photos ! Looks like you had a wonderful solitary hike and some amazing views. This one just went to the top of my list. Thank you
Filling my bucket, one hike at a time.
Amanda
Top

Great use of a sick day. Wish I had thought about it...seriously.

Facing a weekend of rain, I took yesterday as a sick day (I think of it as a “health” day) to check out the snow conditions on Mt. Defiance.

Makes me sick to think I missed out on another great day!

Did you use any traction devices to get along? I've been dying to find an excuse to try out my snowshoes (without going to Mt Hood).
Jim's Hikes

Beautiful! Mt. Defiance just went to the top of my list, too.

I just joined this site today. How great to find others who understand the proper use of a sick day.
Top

That's quite a workout, especially for this early in the season. I intend to do Defiance, but I will have to ratchet up the elevation gains before doing Defiance's 4800 feet.

Facing a weekend of rain, I took yesterday as a sick day (I think of it as a “health” day) to check out the snow conditions on Mt. Defiance.

Makes me sick to think I missed out on another great day!

Did you use any traction devices to get along? I've been dying to find an excuse to try out my snowshoes (without going to Mt Hood).

Thanks. I was considering taking snowshoes but guessed (right as it turned out) that the old snow had compacted and there wasn't that much new snow. I took my microspikes along just in case the old stuff had compacted into ice but didn't need to use them.
Top

I was on Augspurger today. As a self-employed consultant, I can sometimes take a weekend day when the sun is out and just work the weekend. I wanted a south-facing route and some miles, so Augspurger seemed like a good choice. There was some wind there, but I was above the fog in a hour hour and was probably looking across at you at times.

looking west down the gorge

Mt. Defiance is one of my favorite hikes and I have never hiked it in the snow, thank you so much for the report!!
http://www.photographmemories.weebly.com
Top
Post Reply
19 posts