I was fortunate to again be able to switch my day off to one where it was probably not going to rain. Decided to do an out & back to Larch Mountain from Multnomah Falls. I briefly contemplated hauling along snowshoes but in the end decided the snow had probably melted into ice by now so I threw in the microspikes instead. There were ice warning signs up on the tourist trail but the gate was open. There was rime ice all around the Falls, 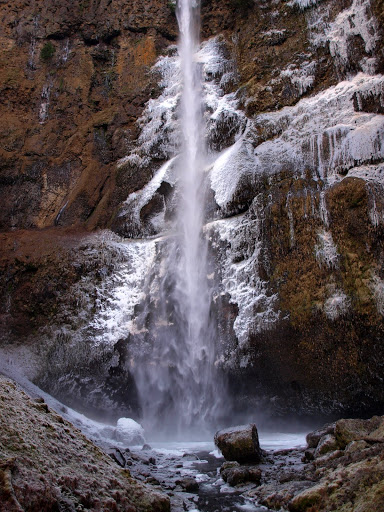 on the bridge and railings, 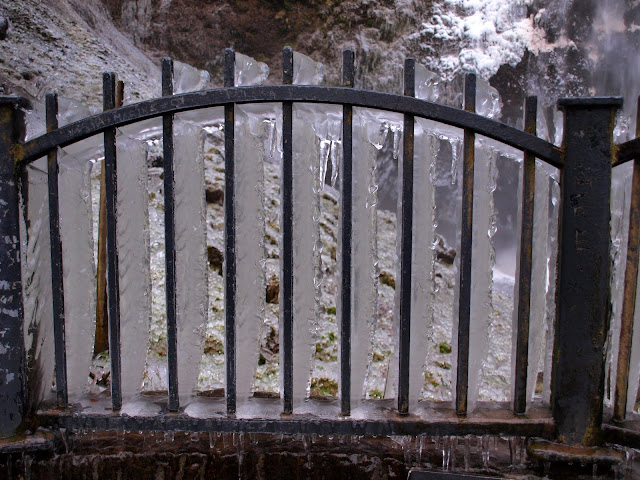 and on a short section of the trail beyond the bridge – I used the microspikes to get past all this. 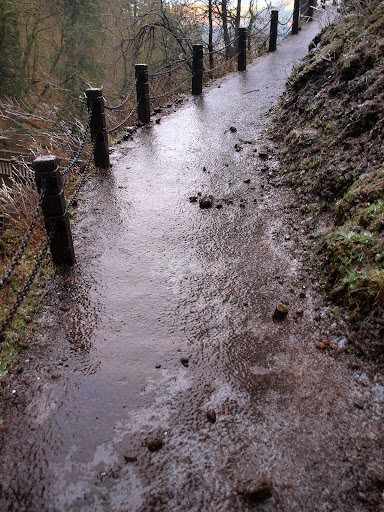 From then on, the trail was essentially dry and snow free almost all the way to the top. High clouds started rolling in as I headed up but there would be a few of those fabled “sun breaks” later on and, while the air was cold, it was not windy. Hamilton and Table were briefly visible across the river. 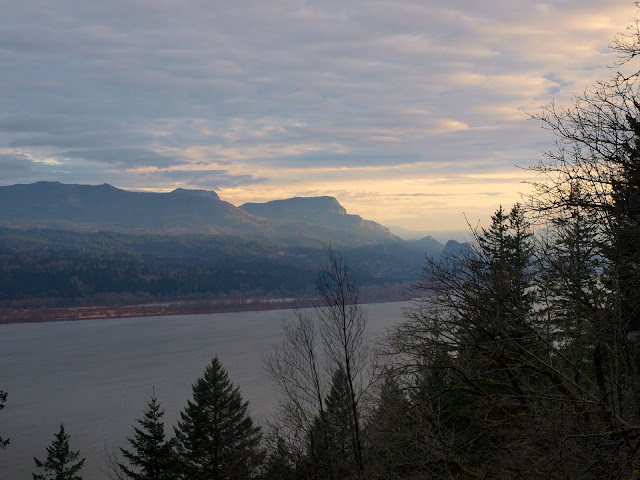 I didn’t need the microspikes again nor would snowshoes have been any use – what little snow there was on the trail was hard and crusty and easy to walk on. This is the boulder field at about 2600’, 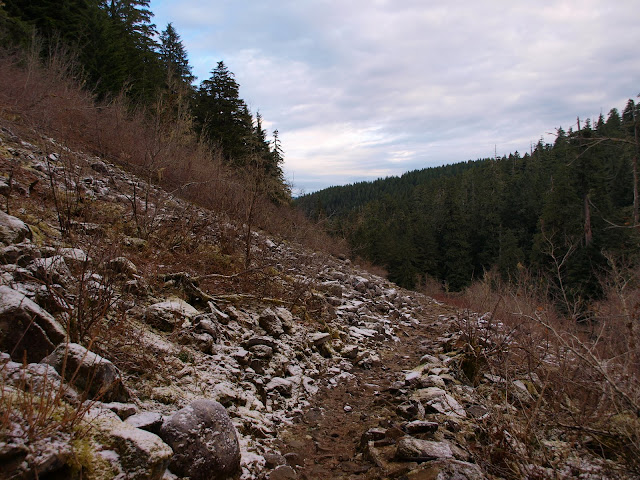 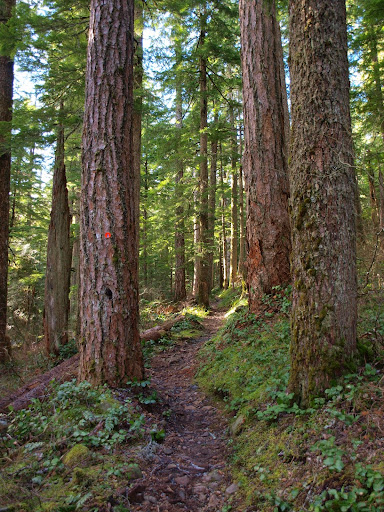 and the steps just before reaching Sherrard Point. 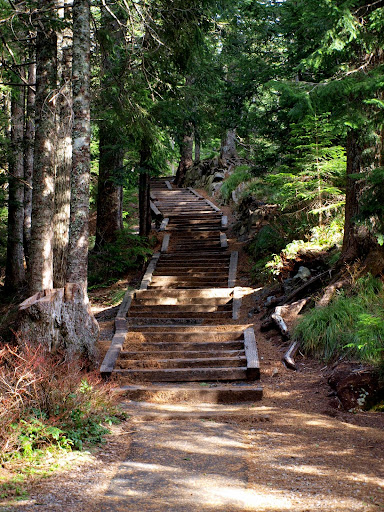 The high clouds eliminated any views of Hood or the other big peaks, but there was a nice view across to the now almost snowless Silver Star. 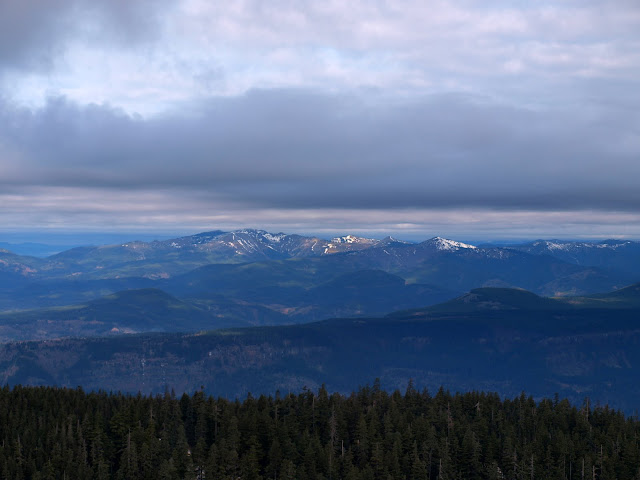 I didn’t go down to the parking lot or the road but my guess is that there is little snow on either one – maybe just enough in a few shady spots to block the road. While there was no snow on the trail, it was cold enough to create ice sculptures in the creek. 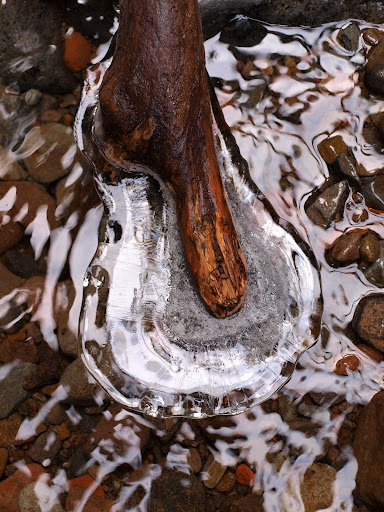 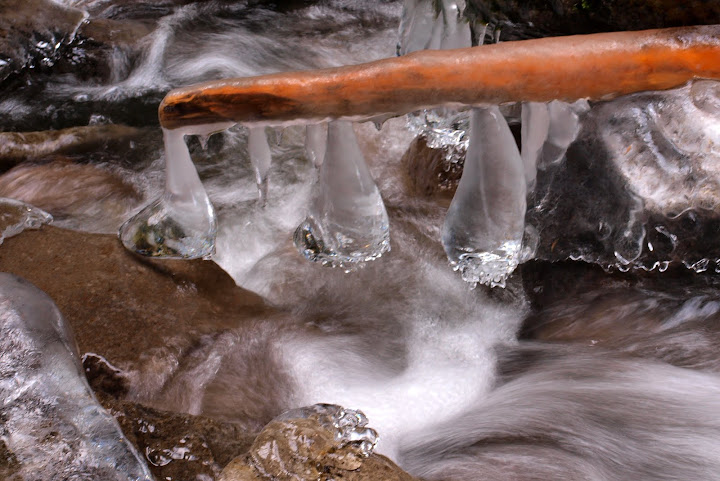 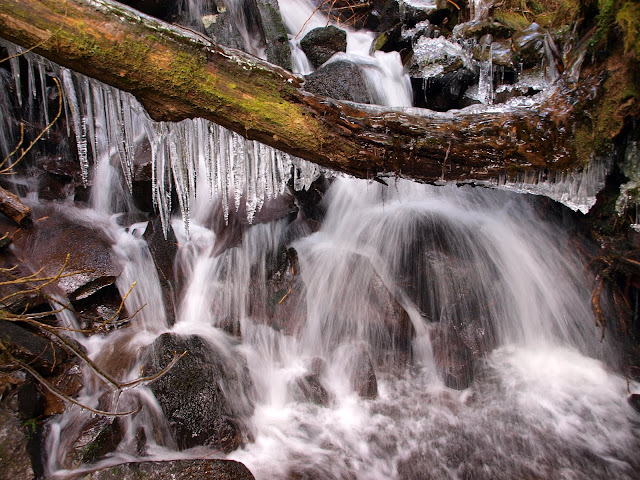 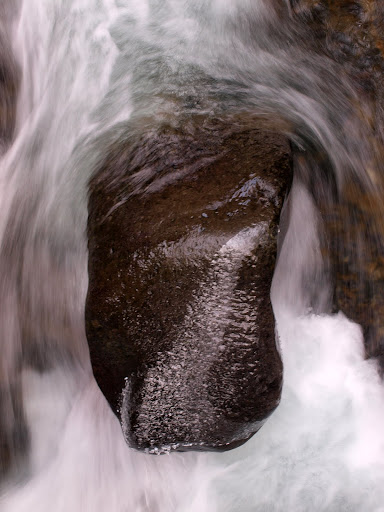 I passed three people about half way down from the top and then it was quiet until I started passing small clusters of tourists on the paved trail. However, compared to a day in the summer, the trail was essentially deserted. Good hike – 13.6 mi, 4000’ – so going back to work on Friday isn’t going to be so hard.

I love the shot of Hamilton and Table. How cool! The way the light hits them is awesome.
Top

Thanks for the report! Excellent pictures.
http://www.photographmemories.weebly.com
Top

That's just weird, Van. The Snotel site shows 30-40" of snow at lower elevations in the Bull Run watershed! Must be the southern exposure of Sherrard Point at work..? Very weird.

BTW, this is reminding me of last winter (I think) when we had a Larch Mountain trip report devoid of snow in early February, then a giant late February/March dump that left us with six feet of snow up there by May... was that last year or the previous year?

Great report and pictures - love the ice formations in the creek. Amazing no snow on the steps to the point - very mild indeed. Keep the great reports coming!
Top

Splintercat wrote:That's just weird, Van. The Snotel site shows 30-40" of snow at lower elevations in the Bull Run watershed! Must be the southern exposure of Sherrard Point at work..? Very weird.

BTW, this is reminding me of last winter (I think) when we had a Larch Mountain trip report devoid of snow in early February, then a giant late February/March dump that left us with six feet of snow up there by May... was that last year or the previous year?

Thanks! My hike logs from last year show a lot of snow-free hiking Jan-Mar, followed by one big season-ending snow event, then about a month of rain. There was a lot of talk about an "early summer" and then the rain started. Maybe the same this year? Who knows - I'm just going to squeeze in all the hikes I can while the weather/snow cooperates.
Top

I think it was 2 years ago when the Gorge got a dumping of snow that I got in a sweet snowshoe from Multnomah Falls to Larch. We may have been up there the day or two before rt. 84 was closed due to snow. I was hoping to get back up there in winter-like conditions this year, but maybe that opportunity won't come. It looks so sad with no snow on it

But nice report!
Will break trail for beer.

Great report and pics, Van. Amazing that the top is snow-free. I think I'll go out and something outrageous Sat. before the trails get snowed in again.

Good information for us staffing the Visitor Center at Multnomah Falls. Many people do the hikes but do not come in to give us the information. Not good hearing there is so little snow at the top of Larch. Hope we get some soon or it will be a dry summer.
Top

I was hoping to get back up there in winter-like conditions this year, but maybe that opportunity won't come.

Hey Jessbe, I went up that way back on Dec. 18th and there was snow in the Lodge parking lot and
tons of snow up the Larch Mt. trail. I happened to turn onto Multnomah Basin road to head
over to Devils Rest but there was at least a foot of snow. I think the major snow dump
came and since melted but it might come again, just saying that it did actually arrive
but it was in December...