Last February, I hiked the East Ridge of Kings Mountain (http://www.portlandhikers.org/forum/vie ... &sk=t&sd=a). My post generated a number of responses, among them one from Eric Peterson with a Mazamas map of various hiking routes in the Elk-Kings area (http://mazamas.org/pdf/maps/Elk-Kings.pdf). It showed a route up the W Ridge of Elk which seemed like a good way to do a different loop of Elk and King. So with a chance of rain in the forecast, I switched my day off to today so I could try this loop under dry conditions. Heading out 6, the fog bank ended just beyond Banks and by the time I reached the Kings TH, the sun was out. 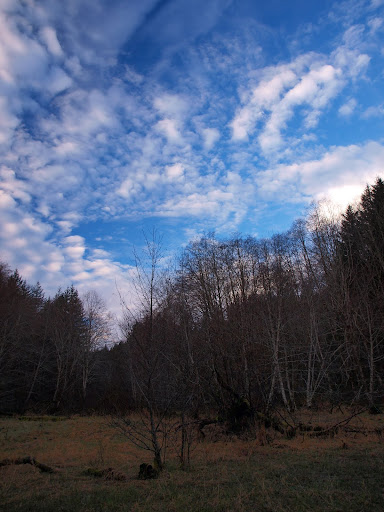 The approach to the W Ridge of Elk is the same as that for the E Ridge of Kings – NNE on the Wilson River trail from the Kings TH to the bridge, then NW alongside the creek for about 1000’ to the base of both ridges – left to Kings, right to Elk. The route up Elk seemed more obvious than that up Kings – game trails were clearly evident right down to the creek. 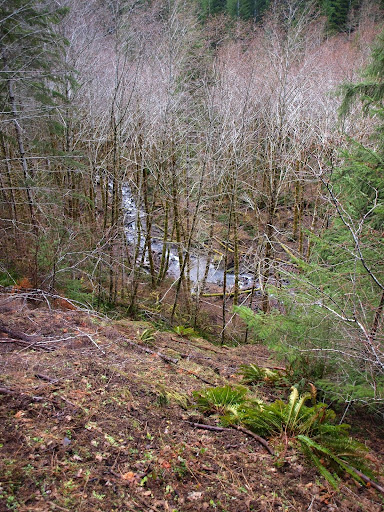 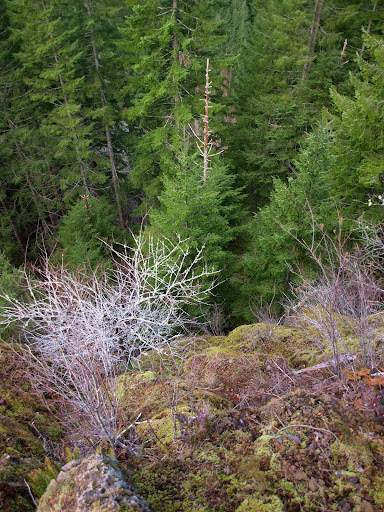 Unlike the E Ridge of Kings, there are no exposed traverses or scrambles on the W Ridge – just follow the game trails through the trees and up – roughly 2200’ in 0.7 mi. But there are a few flat spots on the ridge where you can take rest on a less than near vertical surface. Right at the top of the ridge, I ran into the cliff just below Elk’s summit, 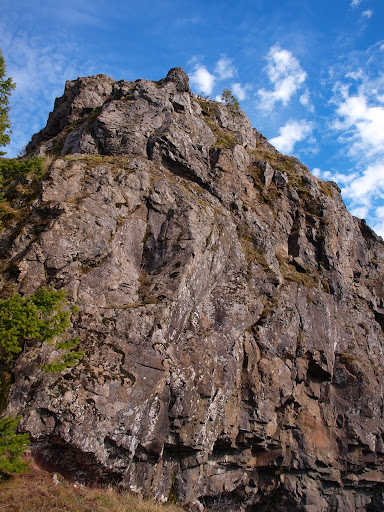 but a contour 50’ to the left brought me to the main trail to the summit. 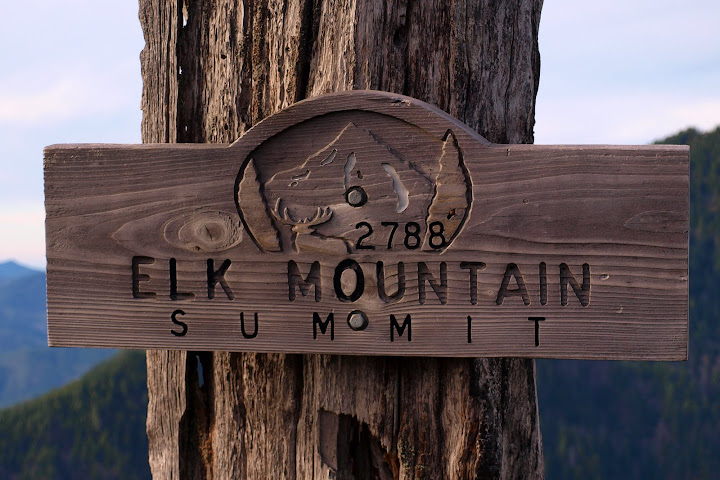 From the summit of Elk, I could look back down almost the entire length of the W Ridge. The arrow marks the start of both the E Ridge of King and the W Ridge of Elk together at the bottom of the canyon. 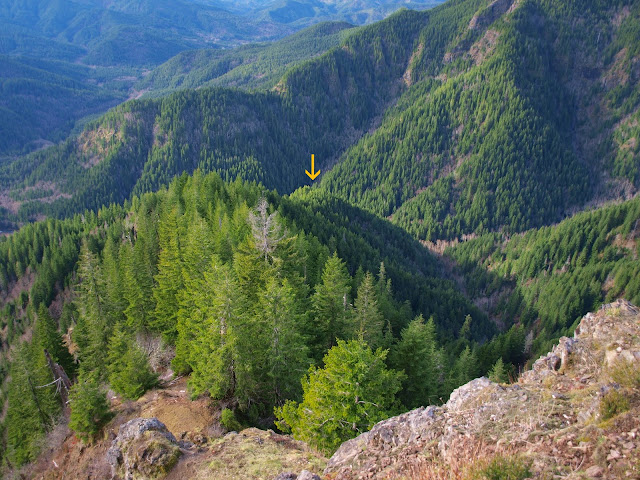 Even though it involved some bushwacking, the W Ridge seemed less steep and less demanding than the usual route up Elk from the campground. From the summit of Elk, I did the usual traverse over to King, noting that there was no snow to speak of the entire way. I stopped along the traverse to get a view of Elk and its W Ridge (with Hood in the distance), 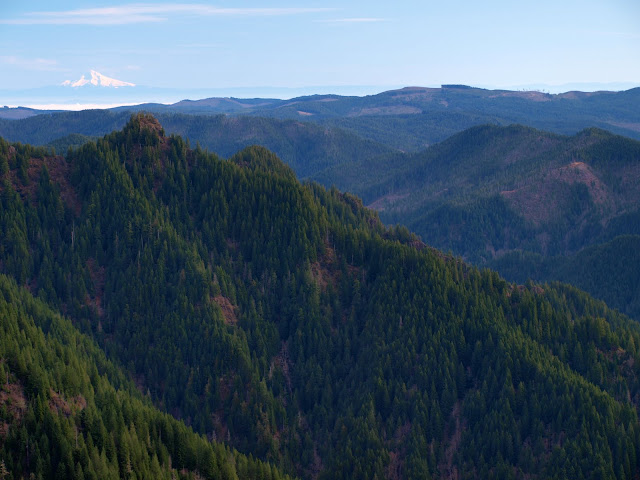 of some small flowers growing in the open area just NNE of Kings’ summit (in January?), 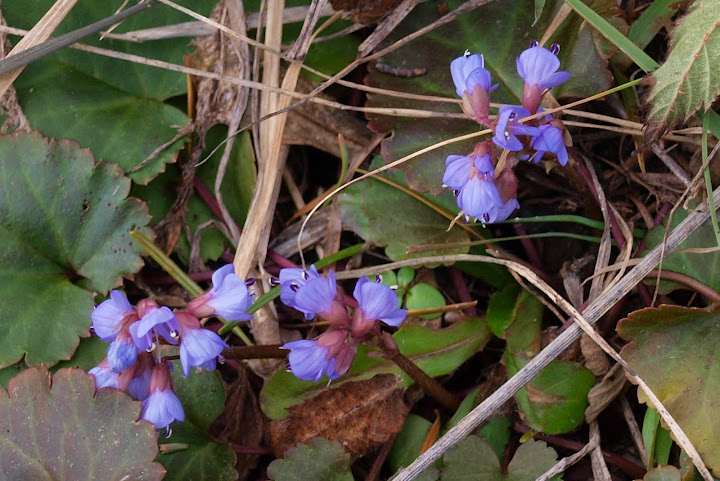 and of Adams (far left) and Hood (far right). 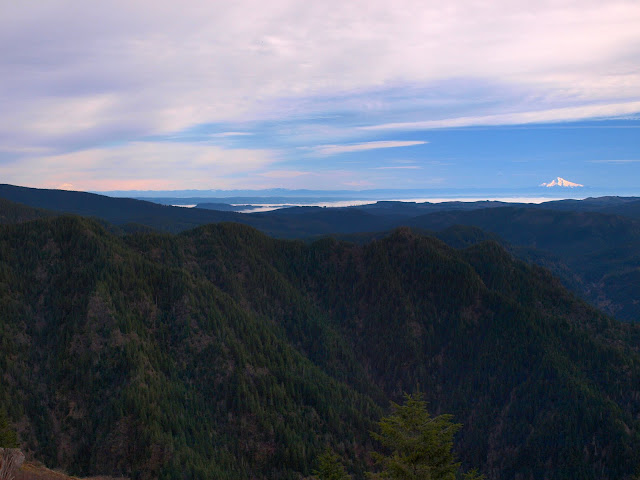 Then on to the summit of King 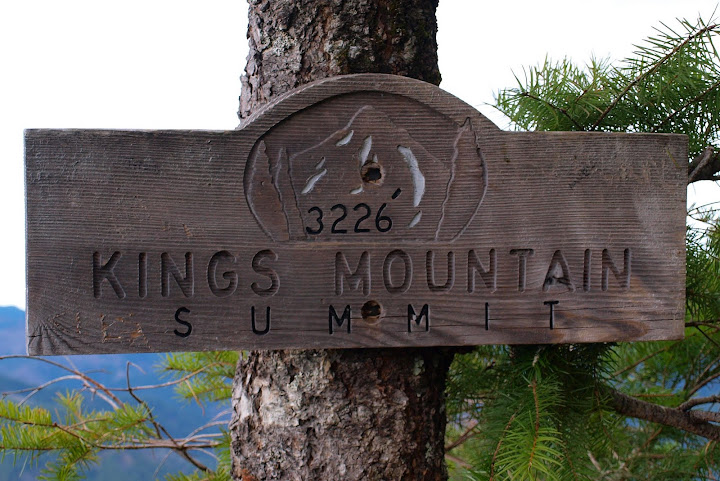 and back to the TH. I saw no one between the TH, Elk, and Kings and then 3 people on the descent of Kings. It was a warm day and I was over-dressed (January?) but otherwise it was all good. About 10 mi and 3700’, with a little routefinding required on the W Ridge.

Great Report, but I have a question. I see lots of these TR's about traversing between Elks and Kings in what appears to be bushwhacking. Isn't there a standard trail route between the two peaks?
Top

This route is also on my to do list for this area, nicely done.

ponyboy84 wrote:Great Report, but I have a question. I see lots of these TR's about traversing between Elks and Kings in what appears to be bushwhacking. Isn't there a standard trail route between the two peaks?

Yes there is now. It started as a rough use trail but has evolved - with much work by the Mazamas - into a pretty good trail that is relatively easy to follow and has no bushwhacking. The descent immediately off Elk is rocky and can be tricky if wet or icy. A good part of the middle is on old roads and is straightforward. The section just below the ridge before Kings is steep and slippery in spots (there's a helpful short rope in one spot) but evident (if, however, there's snow, that section can be a real challenge). But on a dry, clear day in summer - it's a great hike.
Top

Awesome, say you want to out and back up Elk, is that trail pretty sketchy going down?
Top

Nice report Van what a day! I have been throwing around some ideas for a next week . I was thinking MSH rim from Marble Mt but you got me thinking

Thanks for sharing I guess the weather gods will decide for me.

-Roy
The downhill of the mind is harder than the uphill of the body. - Yuichiro Miura
Top

ponyboy84 wrote:Awesome, say you want to out and back up Elk, is that trail pretty sketchy going down?

Which trail? The West Ridge isn't a trail but if you stick to the ridge you could follow the game trails back down. The main trail to Elk is really steep and loose in a lot of spots and, to me, a real pain to descend. I've descended it twice and it wasn't fun either time. Last time I did just Elk, I traversed over to the Elk Creek Trail (mostly road) and descended that - no views but much easier on the knees.
Last edited by VanMarmot on January 28th, 2011, 11:56 am, edited 2 times in total.
Top

Oh man, I want to do that! Never done St. Helens and right now the timing might be perfect
with clear weather and a nice solid snow pack!
Top

VanMarmot - Interesting trip report and great pictures. One more for my "to do" list when I get back home. I'm stuck in Asia till mid-March and have yet to hike this year...