Heading out I-84 early this morning, the air temp was down and the wind was up, with white caps on the river and plumes of snow blowing off the ridge below Hamilton Mountain. Nesmith was picked for the last hike of 2010 because the trail, while it does go into the Mordoresque depths of McCord Creek, is, for the most part, sheltered from the wind. And so it was – the most wind all day was in the parking lot and at the summit – in between it was dead calm, but very cold (low 20s). The sun rising on Hamilton and Table certainly made them look warmer than they were. 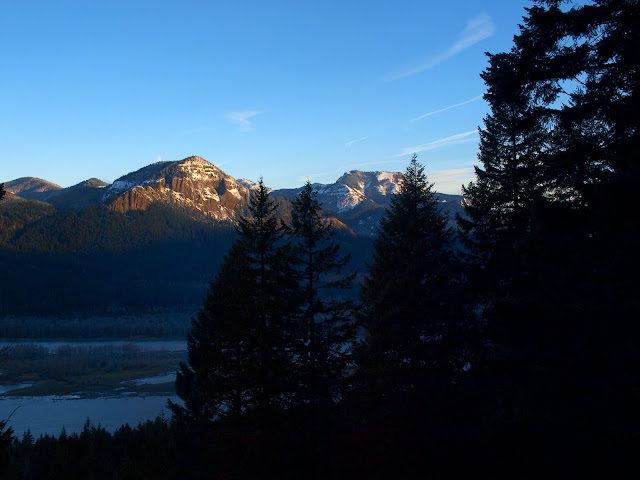 Higher in the canyon, the snow did a nice job of picking-out and detailing the swirls in the basalt flows. 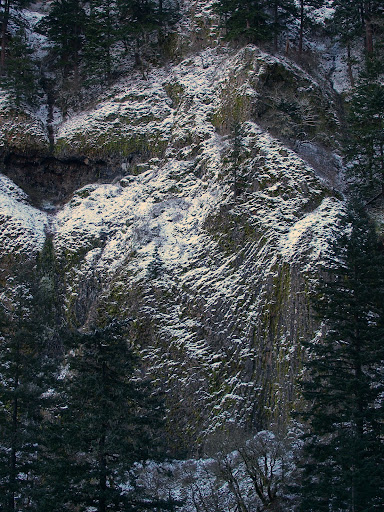 The trail was in good shape except for a cedar which had taken out one of the switchbacks at about 1400’. A trail is just like a house – the maintenance never ends. 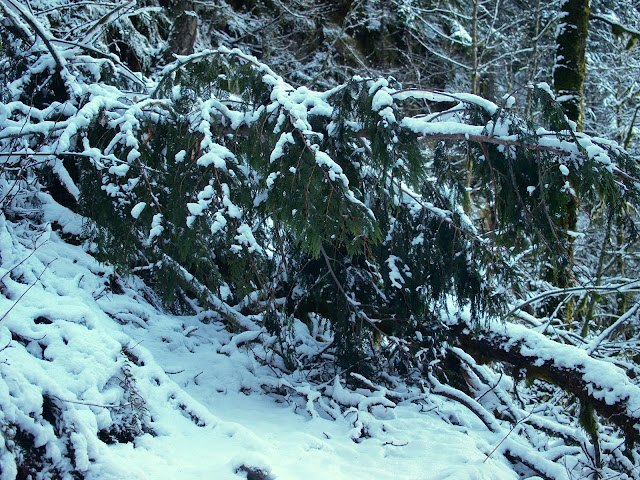 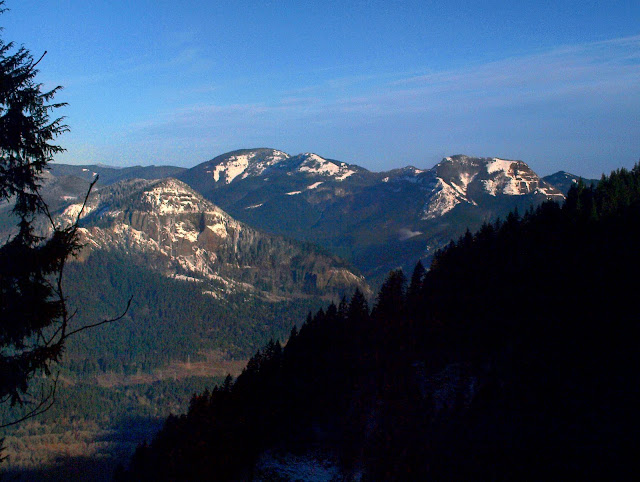 Snow started covering the trail after the first view point and by the ridge crest at 3000’ it was about 6-8” deep. Previous tracks had been largely filled with new snow, so I had the unusual experience of untracked snow ahead of me on Nesmith. 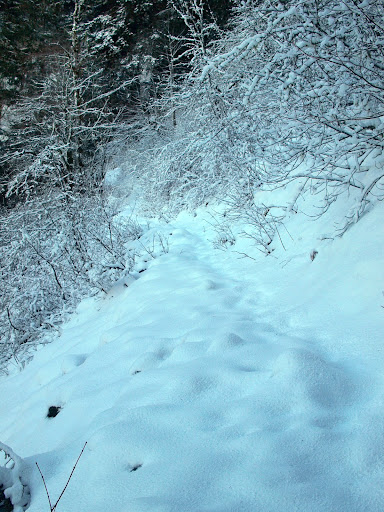 Beyond the ridge crest, where the trail is less steep as it heads into the upper McCord Creek basin, the snow got steadily deeper until it was typically 12-24”, with an occasional crotch-deep posthole. Snowshoes would have been nice for about 200 yds of the hike but not nice enough to justify hauling them 3500’ up the canyon. It was pretty magical the few times the sun found its way through the trees, 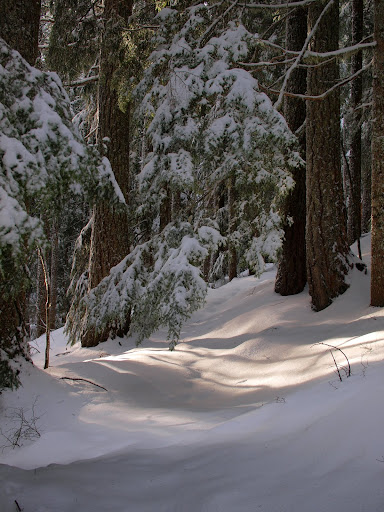 and the snow also made shapes, some of which reminded me of the “aliens” in those 1950’s era B (or C) sci fi movies. 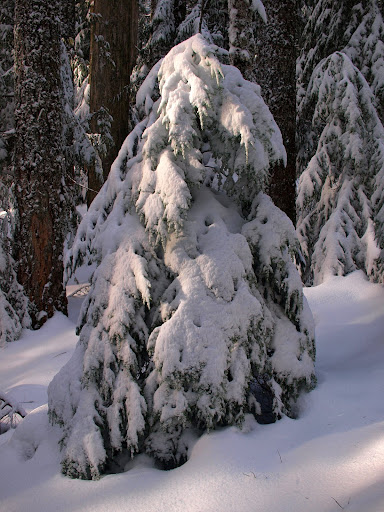 Once I reached the saddle, new snow had largely obliterated any clear signs of the trail or previous tracks, so I turned N and climbed directly up toward the Point. I crossed the road about 10’ left of the trail sign and thought about following the road, but the snow was about as deep on the road as on the slope so I just stayed with the slope. Nesmith is a Gorge hike with a low view to effort ratio (few views, lots of work) but Silver Star was pretty to see when I finally got to the edge of the summit cliff. 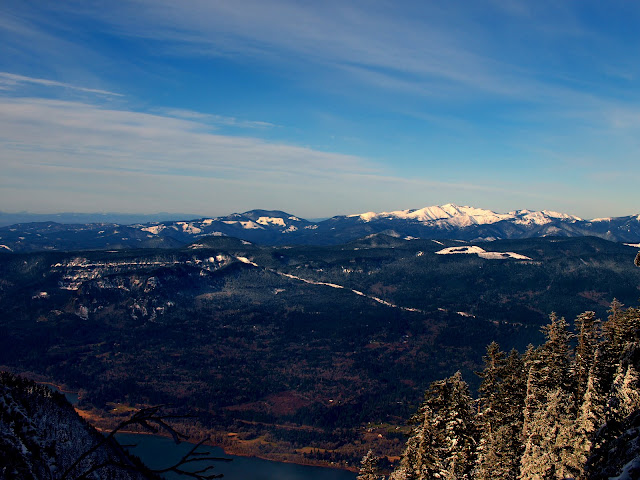 Plans for lunch were cut short by the cold, a partially frozen sandwich, and Gatorade the consistency of a slushy. Warming my sandwich in my armpit got me to thinking how nice it would be to be warm all over and not have to eat partially thawed and (now) smelly food. So, rather than trudge back the way I’d come up, I headed straight down the ridge from the Point to intersect the trail at 3000’, shortening my return by almost a mile. I hurried on down, pausing (briefly) at one of the few places where you can catch a glimpse of Adams. 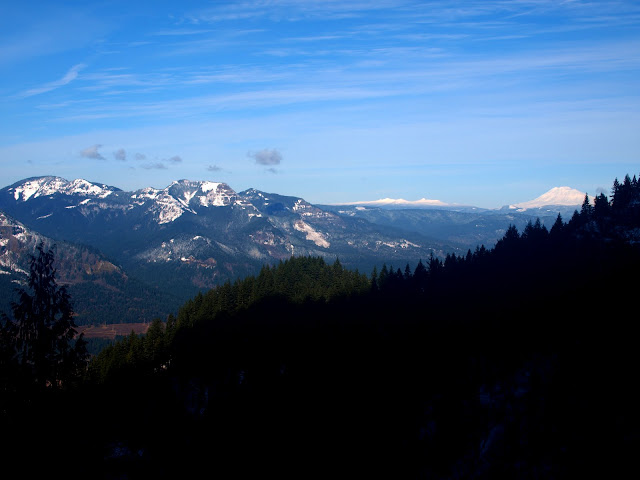 Mine was the only car at the TH as I started up the trail in the morning and there was only one other car when I got back. Whoever it was must have gone to Elowah Falls. I always see cars in the TH parking lot and Nesmith is a popular hike so I expected – despite the snow and the cold - to see a few other people on the trail but I saw no one all day. There were foot prints that had come up to the ridge at 3000’ then turned around, but I never saw the person who made them. Having Nesmith to myself was a good way to finish 2010!
Top

Partially frozen sandwich, slushy gatorade, 8" of snow on the trail, and blue skies. Plus having the trail all to yourself. Sounds great.

And nice pictures - that is what most impresses me about the people who post on this forum, many of them have an excellent photographer's eye and can pick out the interesting details in the landscape around them. Your pictures definitely fall into that category, VanMarmot. I think it makes the hiking more than just an athletic event when you take time to enjoy the sights around you.
Jim's Hikes

Crusak wrote:Partially frozen sandwich, slushy gatorade, 8" of snow on the trail, and blue skies. Plus having the trail all to yourself. Sounds great.

And nice pictures - that is what most impresses me about the people who post on this forum, many of them have an excellent photographer's eye and can pick out the interesting details in the landscape around them. Your pictures definitely fall into that category, VanMarmot. I think it makes the hiking more than just an athletic event when you take time to enjoy the sights around you.

Thanks! Years ago an "old" (relative to a teenager) climber told me that if you aim for 2 mph on average over the course of a hike, including all the ups and downs and snow and whatever, you'll have time to do other things than just haul a heavy pack up a steep hill. It's advice I've followed since. Fortunately, as I've gotten older, the gear has gotten lighter, so 30+ years on I'm still making 2 mph. I remain in awe of those who can do 4+ mph for hour after hour while taking pictures, but 2 works for me.
Top

Nice report and great photos, Van! An ambitious end to the year.

Don
"Everything works in the planning stage".
Top
Post Reply
4 posts • Page 1 of 1