One last trip up Dog for 2010, with the recent snows adding some interest to an old classic. The fog in Portland dissipated shortly after Troutdale and it was sunny by the time I reached the TH. It was cold, really cold, but there was little or no wind (even on the ridge above Puppy Dog), so it was bluebird up to the first view point, which is where the snow really started. 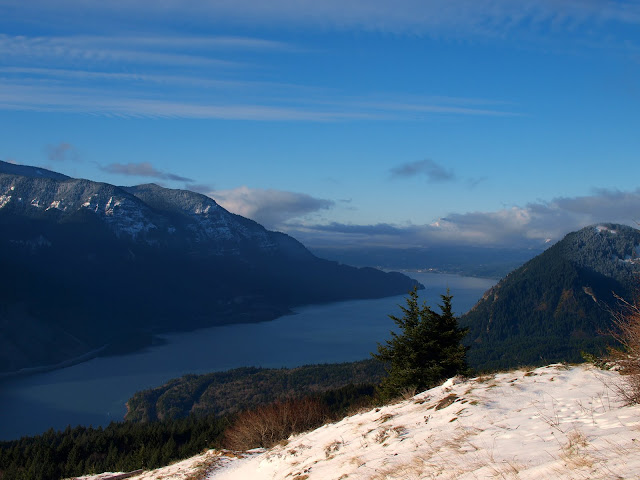 There were no fresh people tracks on the trail, but various kinds of small animals had been running all over it, including (I think) a rabbit (or fat squirrel?). 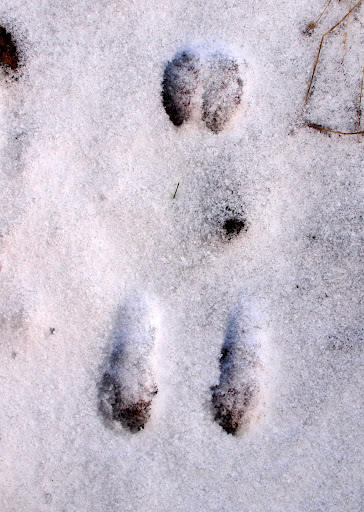 Just before Puppy Dog, the snow had reached 12-24”, with icy spots and posthole opportunities, 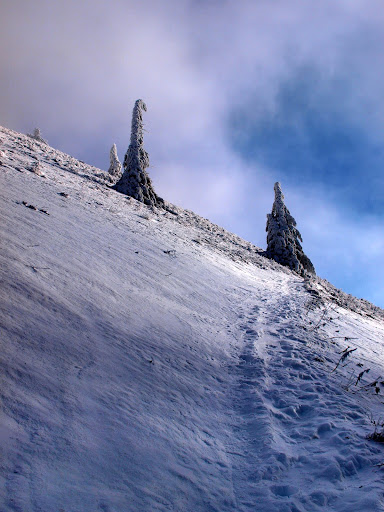 but the view to the E was a good one. 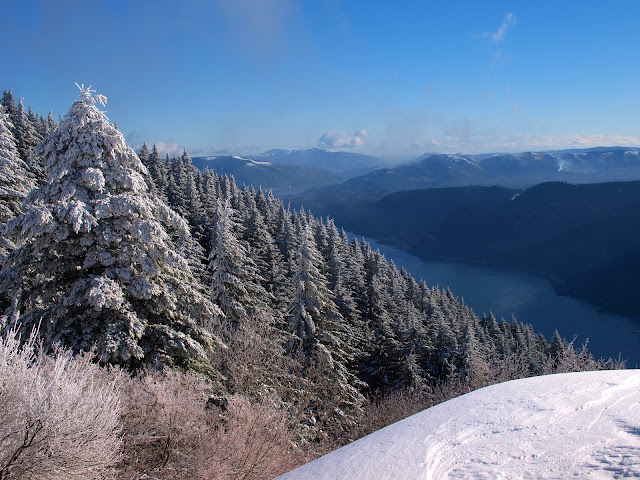 It had apparently been quite windy on Dog recently, 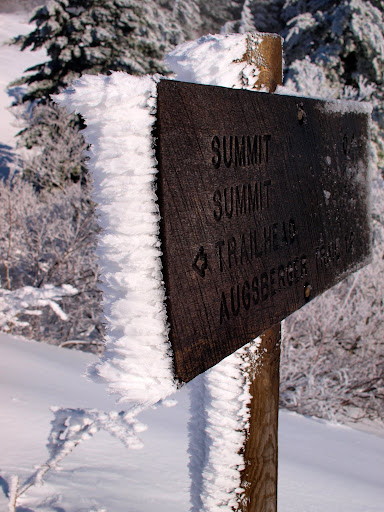 but today it was a gentle breeze (by Gorge standards) and I didn’t have to brace with my pole to climb the final stretch to the summit. 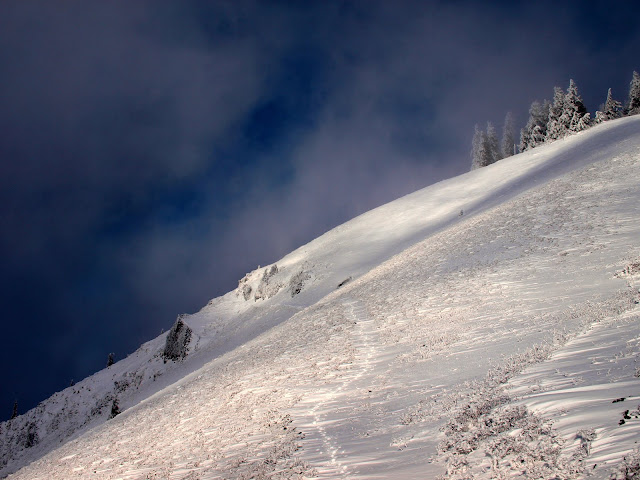 The wind had also been busy higher up, 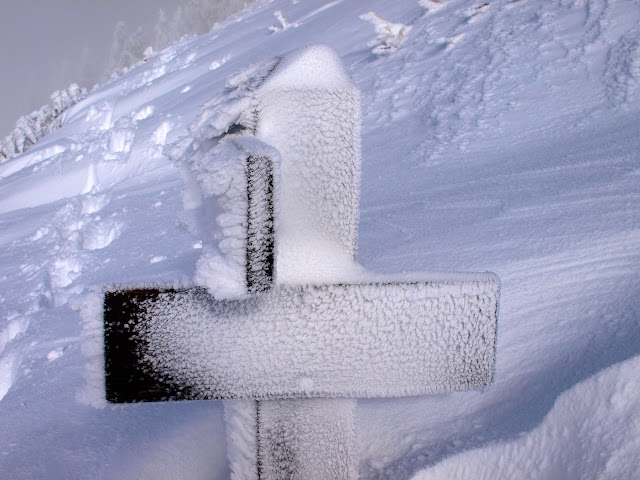 and had been howling and scouring and doing some nice sculpting on the summit too. 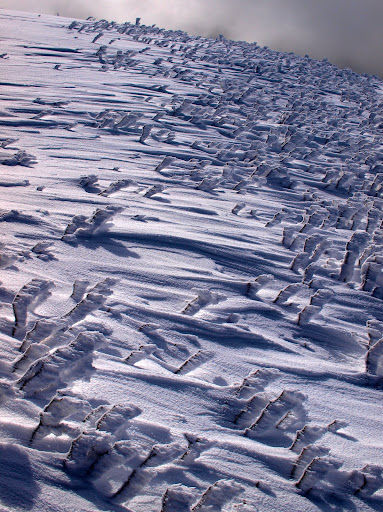 I’ve been on Dog when the wind is doing this kind of sculpting and it’s one of those character building moments, particularly if your “winter” gear isn’t up to the task. Down from the summit, I saw that the Augspurger Trail was an expanse of pristine untracked snow, so I decided to head back that way. The trail (arrow) was pretty visible through the snow, but there were a few icy spots and more postholing (which was minimized if I walked the outside edge of the trail). I wasn’t using snowshoes because of all the sidehilling this trail requires – slipping sideways doesn’t much interest me. 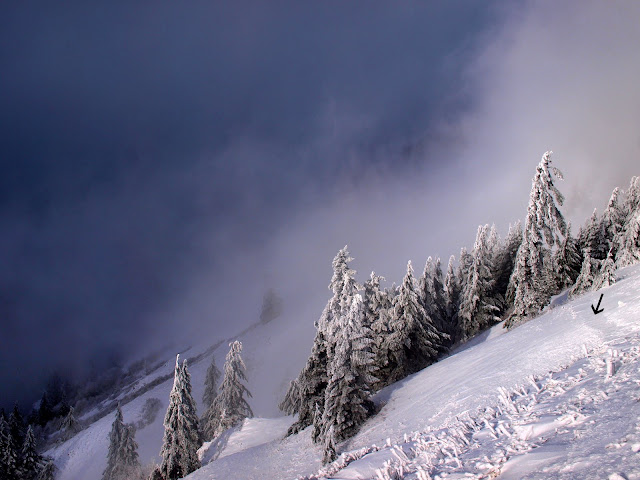 This is the point where the trail makes a short climb before heading down – near the high point it was almost completely invisible under 3-4’ of blown snow. 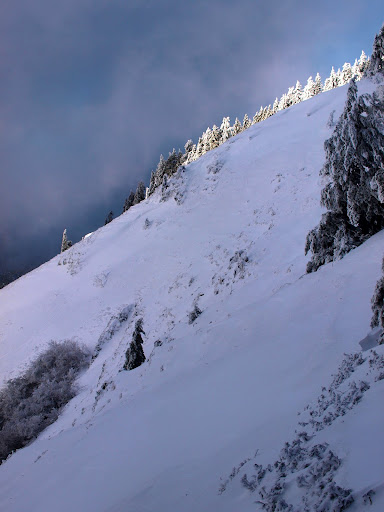 The snow seemed to highlight the big landslide that had come off of Greenleaf Mountain about 2 years ago. 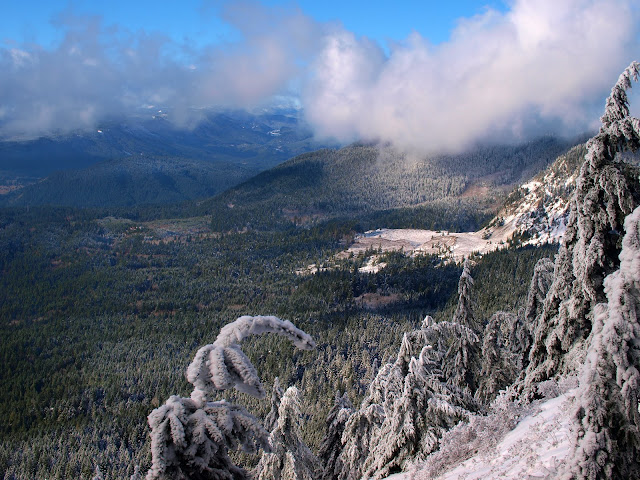 There was one person coming down from the summit as I was going up and later I passed two people heading up, otherwise it was a near solo hike of Dog. I was therefore surprised to see this many cars in the lot when I got back – I guess no one wastes a sunny winter day in the NW if they can help it. 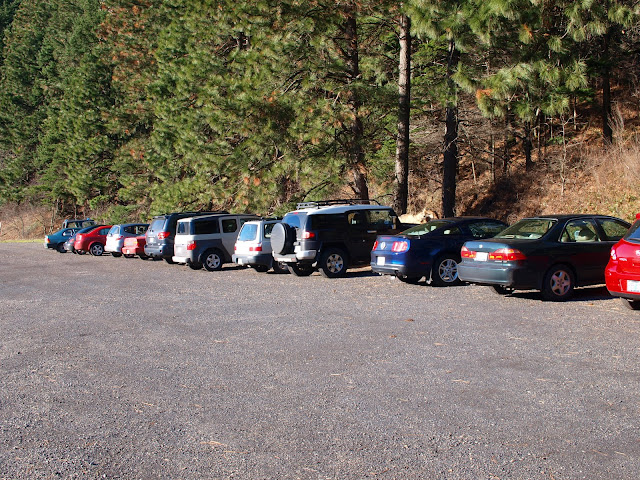 Hahaha looking at the parking lot picture I'd never have guessed what awaited you at the top. Blue skies, mild wind, and a trail (somewhere under the snow) in front of you - a perfect day!

I haven't done Dog Mountain yet (it is on my short list, to do very soon!).

Did you use any traction for your feet, like microspikes? Looks like the trail was a bit challenging on the sloped spots - did you ever get the feeling you were gonna do some impromptu/unplanned glissading down the slope?
Jim's Hikes

Awesome shots.
"When we try to pick out anything by itself, we find it hitched to everything else in the Universe." - John Muir
Top

Great pics! And you caught the gorge in one of it's rare un-windy moments. The pressure gradient has just switched from onshore to offshore, so east winds will be blowing all across the area by this time tomorrow.
Tyler Mode
http://www.naturespixpdx.com
Top

Crusak wrote: Did you use any traction for your feet, like microspikes? Looks like the trail was a bit challenging on the sloped spots - did you ever get the feeling you were gonna do some impromptu/unplanned glissading down the slope?

You should try to fit Dog into your schedule this weekend. I had my microspikes along but didn't use them - the icy spots were short and I either went over them carefully or around them. By now there's probably a well trod trail up Dog so you shouldn't need anything except your boots.
Top

VanMarmot wrote:You should try to fit Dog into your schedule this weekend....

I may try that... negotiating with the family right now even as I type!

Wow I would skip Dog Mountain and drive further east if I saw so many cars at the trailhead (unless i came to see balsamroot)! It's probably due to loop trail that you hardly saw anyone. Perfect day to be on the trail.

VanMarmot - you mentioned that near the top the snow was 3' to 4' deep - did you get all the way to the top, or did you stop somewhere short of the summit?
Jim's Hikes

Crusak wrote:VanMarmot - you mentioned that near the top the snow was 3' to 4' deep - did you get all the way to the top, or did you stop somewhere short of the summit?

I went up to the summit and then back via the Augspurger - to make a loop. It was only 3-4' in one spot on the Augspurger trail - no more than 2' in spots near the summit. So if you went out and back on the Dog Mtn trail you shouldn't have any problems with snow depth. Of course by now, there's probably a good trail to the summit.
Top
Post Reply
11 posts