) because of an ill-considered 2nd or 3rd helping...). Weather reports earlier in the week were all wet and gloomy but, surprise, suddenly offered up a “dry” Thursday and Friday (I want a job where you only have to be right 50% of the time...). So off to Munra Point - short, steep, aerobic, and lots of fun with snow. I usually start at the Wahclella Falls parking lot but thought I’d try the dirt road (turnoff just before the Exit 40 sign) that puts you right on the Gorge Trail about 0.75 mi from the Munra use trail. 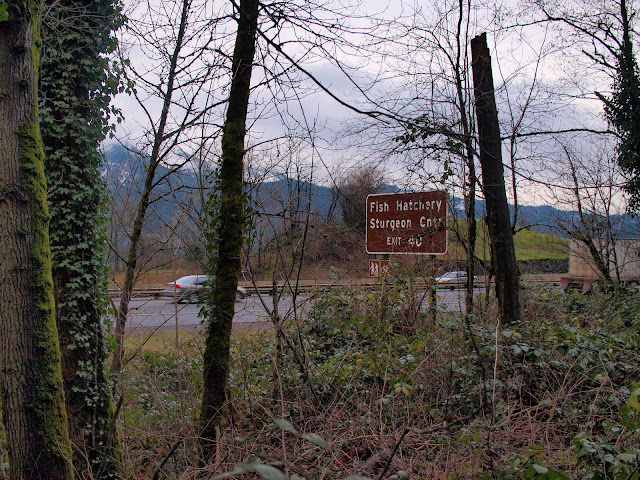 From there it was W on the 400 trail toward the use trail. I came across a “new” (or just another) use trail just E of the one with the “Trail Not Maintained” sign. It junctions with the old use trail about 100 yds uphill. Snow became a regular feature as the trail turned on to the ridge, 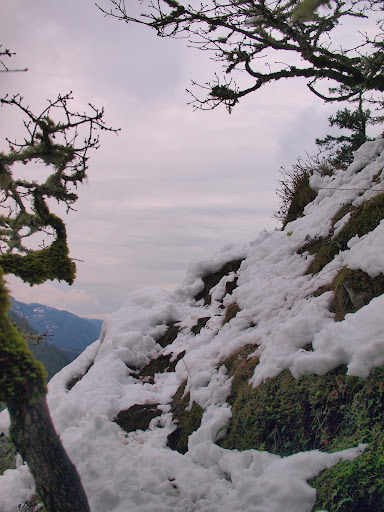 and got thicker on the (steep) way up. 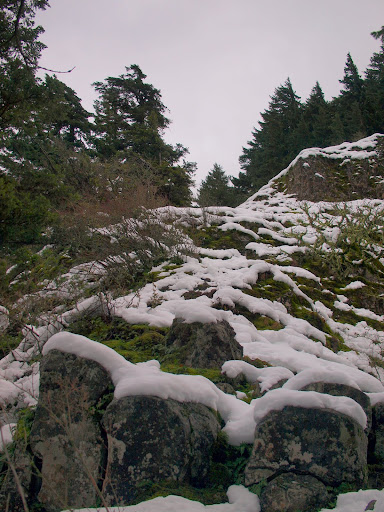 There was a surprisingly clear view down the Gorge, given the clouds and mist that were swirling around and above me. It was windy on I-84 but there was very little wind on the ridge and it wasn’t very cold – cold enough to keep the snow firm – but not too cold. 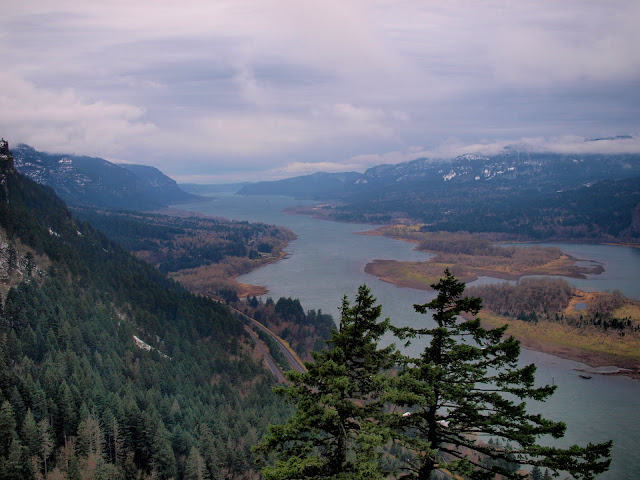 Although there are some scramble bits along the ridge, the chimney or gully just before the summit is probably the “crux” of lower Munra Ridge. 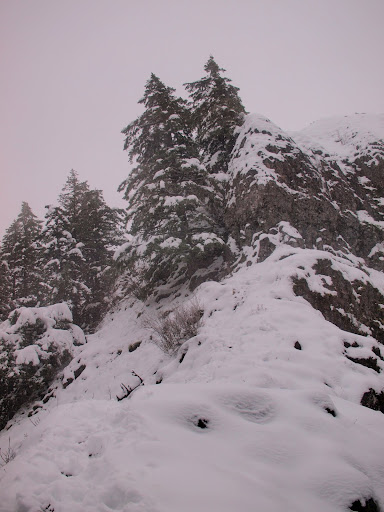 It looked like this last January – no snow and all wet – which says something about the winter we missed. 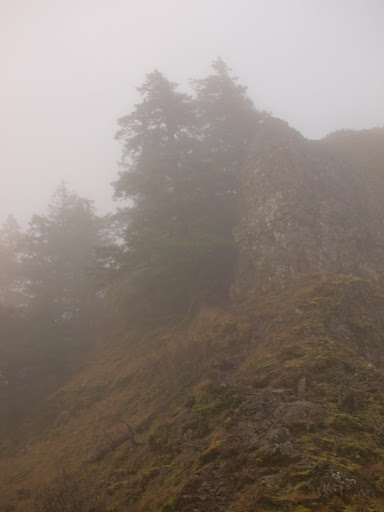 The gully wasn’t too bad – snow was stiff for good foot holds and there was only a little ice near the top (where there are tree limbs for handholds). 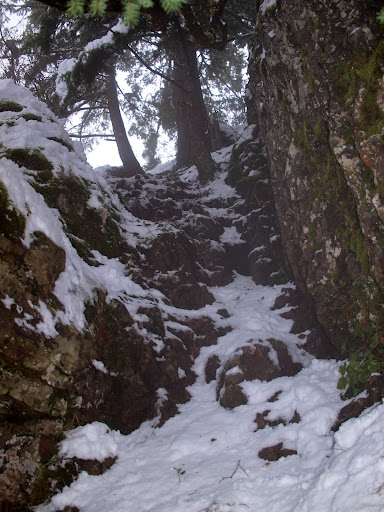 There was a certain elegant simplicity about the snow waiting on the ridge above the gully. 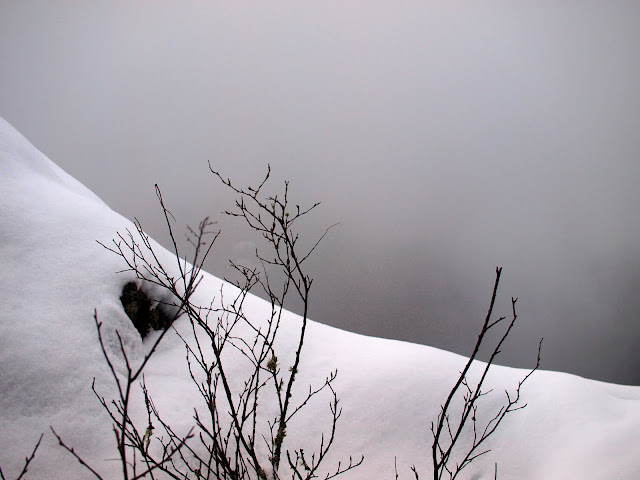 This is looking across toward Munra’s NE ridge – notice the cornices – bad idea to wander out there for a “better” view. 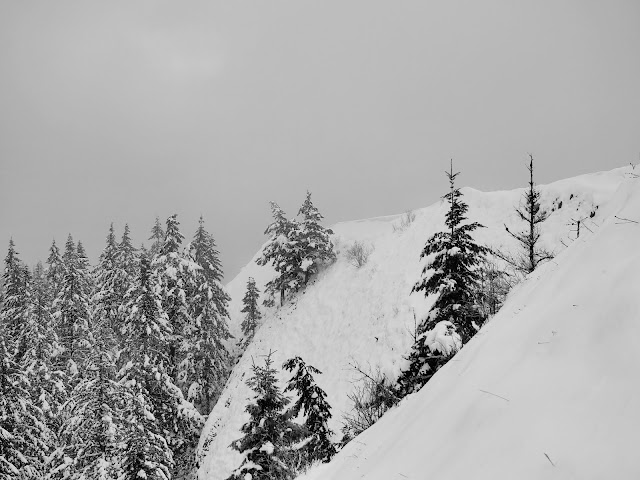 I was following some tracks, but they stopped about 20’ from the actual summit, giving me an unexpected “untrodden” snow experience, as well as some amazing views of The Fin to the S, 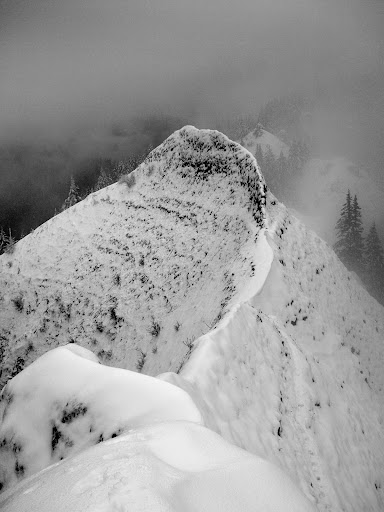 Bonneville Dam to the NE, 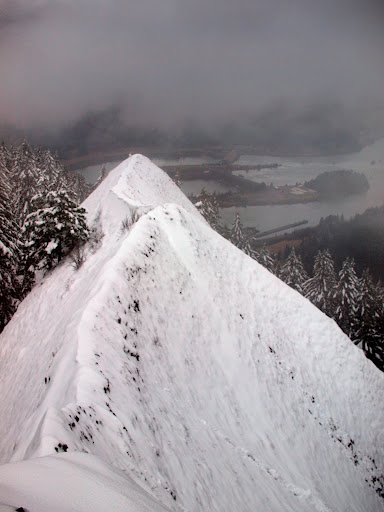 the still very snowy Table Mountain to the N, 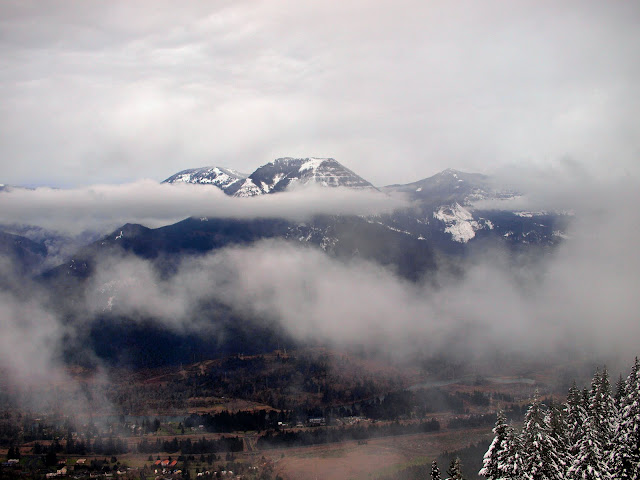 and the Gorge to the W. 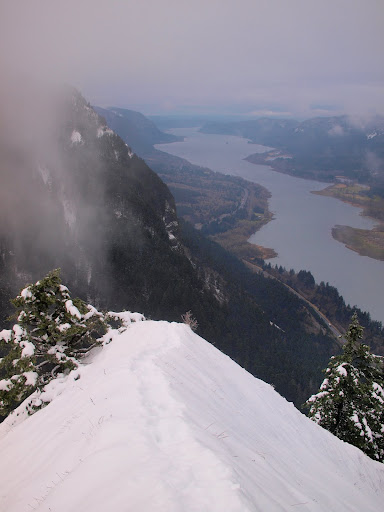 Because I was working against momentum on sometimes slick snow, rocks, or dirt, going down was a little trickier than going up and not a lot faster - "down" the gully is always a little more thrilling than "up" the gully. 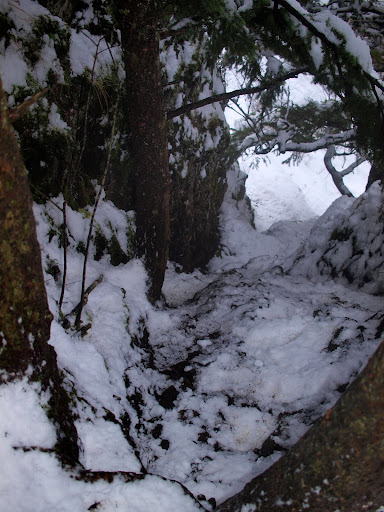 The clouds cleared occasionally, but never dissipated, so this was my parting view of The Fin and upper Munra. 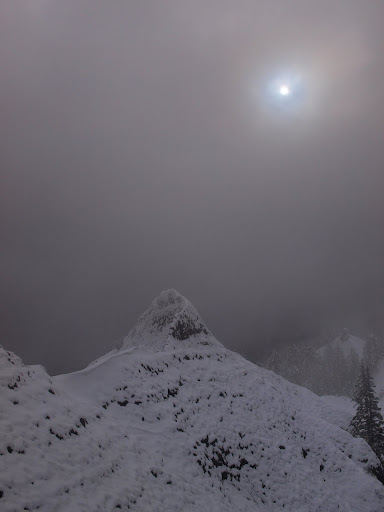 Good, short (4.5 mi RT, 1800’), sturdy hike – I can now overeat with a clear conscience (but will probably have to snowshoe up Table Mountain again next week to really square the calorie count).
Top

A lovely early winter trip report. Thank you for sharing.
"When we try to pick out anything by itself, we find it hitched to everything else in the Universe." - John Muir
Top

Great photos! Its amazing even on "cloudy" days the views are still there...well, sometimes!

I experienced the same wind/lack of wind in the gorge. It goes to show you what an inversion can do. The cold air sinks and flows through the gorge (creating the wind) and the upper levels remain warmer with less wind.
Tyler Mode
http://www.naturespixpdx.com
Top

Great trip report, beautiful pics. I've been putting this hike off for a while now and not that I'm better equipped for a winter jaunt up this sucker, your pics have convinced me, but a question, how exposed is that gully?
Top

Nice report, I can't imagine going down that chimney in those conditions - not a long fall but it would hurt.

ponyboy84 wrote:Great trip report, beautiful pics. I've been putting this hike off for a while now and not that I'm better equipped for a winter jaunt up this sucker, your pics have convinced me, but a question, how exposed is that gully?

Thanks! It's not exposed in the sense that you'd free fall to a really hard landing, but (as Pablo notes), you'd probably get pretty banged around if you just slid down it

. It's definitely 3rd class but has good handholds and footholds, so if you move thoughtfully (3-point stance, test all holds before putting your weight on them, etc.) it can be done safely. I did it once when it was filled with ice (not just crusty snow) and would seriously suggest skipping it if you found it in that condition. Also it can be easier to climb up a route than down it, so if you start getting uncomfortable going up, give some thought to turning back and trying it later.
Top

well done. I always enjoy trip reports that inspire me to get out regardless of weather and I enjoy seeing the terrain in winters grip.
lightweight, cheap, strong... pick 2
Top

Great report, Van! I would have never expected to see a snow report of this hike.
Top

Some of those would be vertigo inducing!! Nice job on the photos!
Top
Post Reply
13 posts