Thanksgiving is the one day when my help in the kitchen is NOT encouraged and I’m expected to have a hearty appetite (in truth, my wife is a wondrous cook when she has the time for it). Sitting on the couch wasn’t going to build an appetite and there might be an unfortunate (for me) culinary incident if I wandered into the kitchen looking for a beer. So, the obvious solution (to me at least) was to go hiking with only a single MOJO bar for sustenance, ensuring a return hours later with a ravenous hunger. Not wanting to make too much of an expedition out of this, I decided on Devils Rest – close but still interesting what with all the recent snow. I got to the Angels Rest TH at 8:15am and there were already two cars in the lot. The first dusting of snow started at the first boulder field. 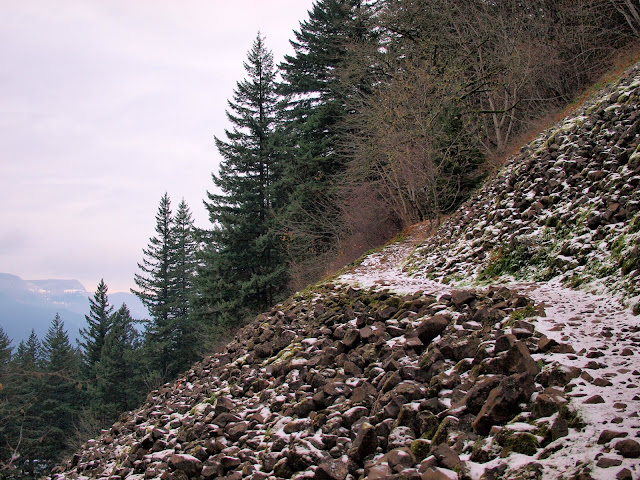 It was just above freezing but fortunately there was no wind to speak of, so it didn't feel very cold. Coopey Falls hadn’t iced-up at all but spray was building some ice sculptures on branches overhanging the creek. 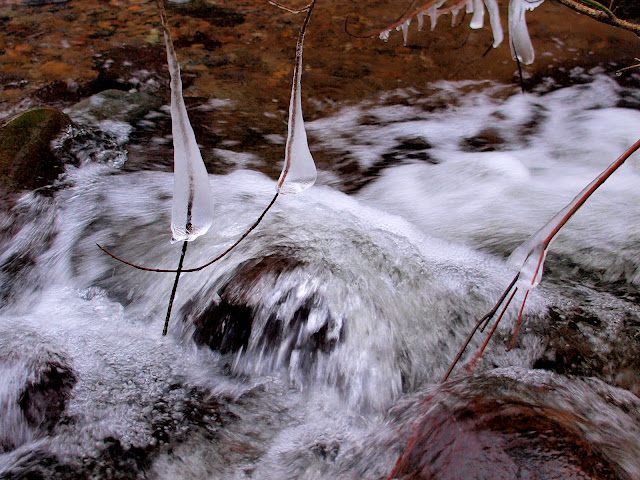 It was an overcast day, but not a particularly cold one (if you were dressed for it). 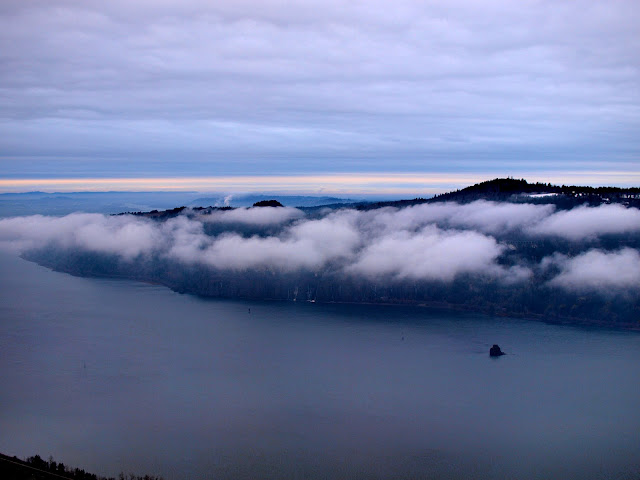 I passed a couple descending the trail and there were 1-2 people ahead of me, but otherwise this was one of those rare days when Angels Rest was largely deserted. 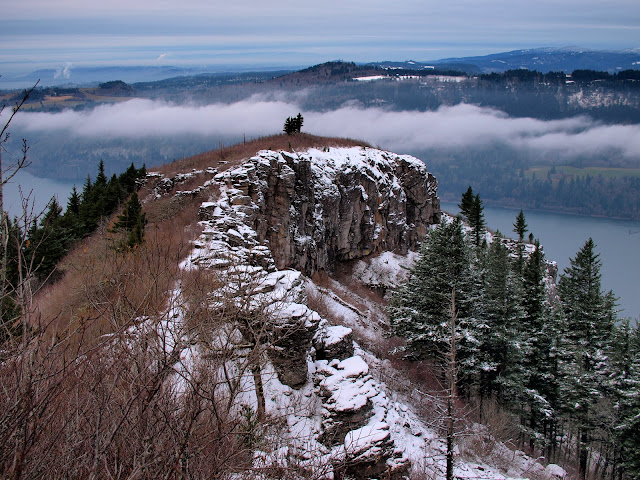 The Angels Rest trail was covered with maybe 1-2” of crusty snow up to its junction with the Foxglove Way Trail. The winter wonderland started a short ways up the Foxglove trail. 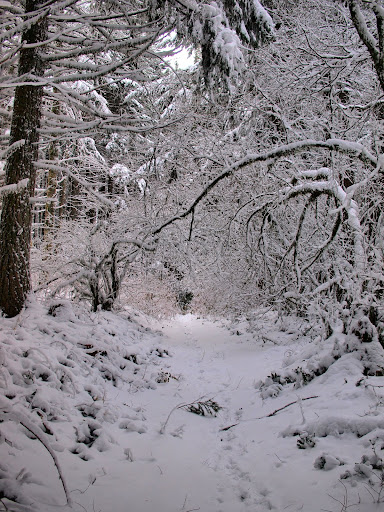 As I ascended, the snow got progressively deeper, finally leveling off at 12-18”. I didn’t have to posthole since someone had cut trail the day before. It was a good test for my new waterproof, insulated hiking boots – which worked just fine. I was really enjoying hiking in the snow except that the slightest touch of a branch would unleash a torrent of snow on me. 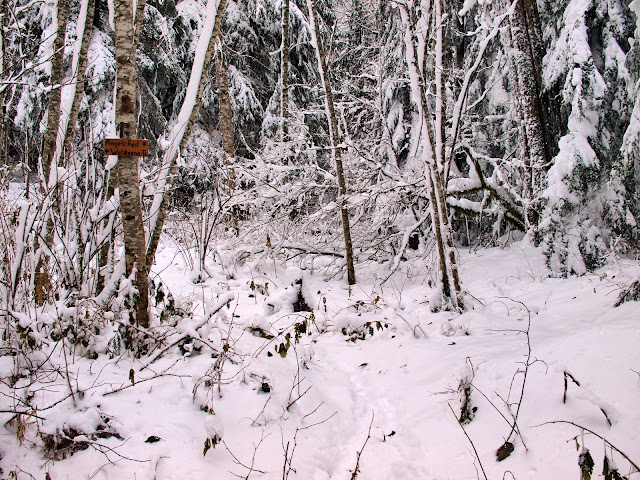 I continued on past Devils Rest to the really good viewpoint off the 420C trail, where, despite the overcast, I had a decent view over to Hamilton Mountain and Hardy Ridge – with Beacon Rock almost lost in the clouds and smoke. Back at Devils Rest, I found that the Halloween decorations were still in place. 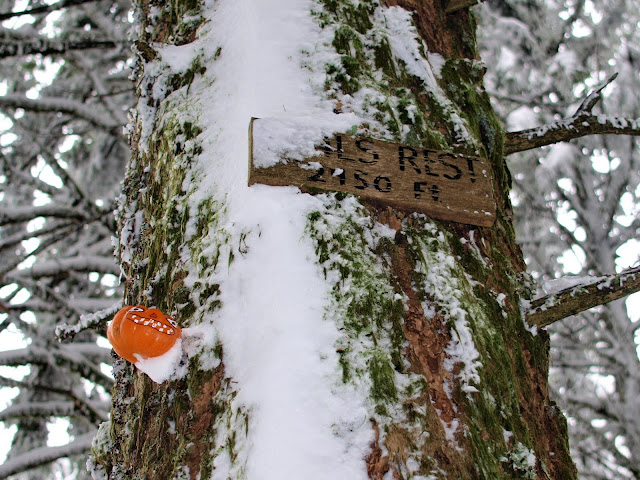 To make a loop, I turned right on the Foxglove trail to reach the Angels Rest trail E of the campsite. When I passed it, this spider was very much alive and heading somewhere with determination. How it survives on snow at 32F is a mystery. 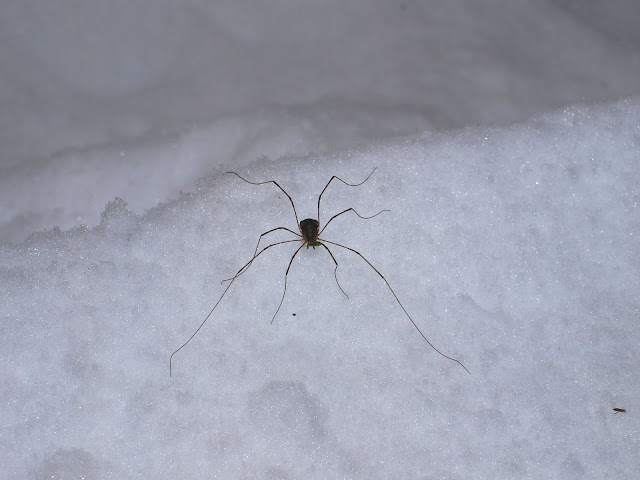 As I got back to Angles Rest, the sun made a very weak, very brief appearance – just enough to add some highlights to the snow, 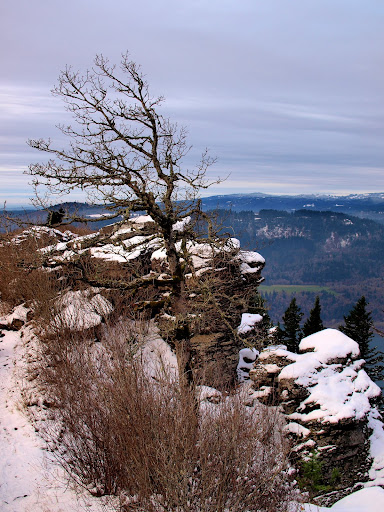 and to illuminate Silver Star in the distance. 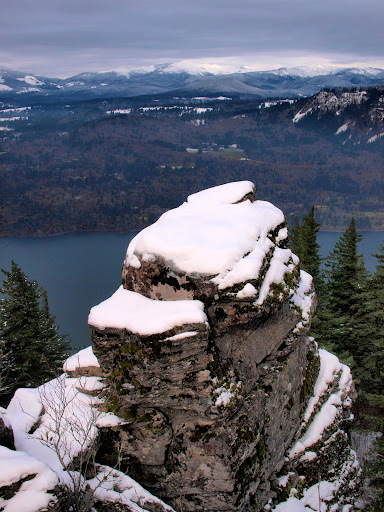 There are, I think, many things to be thankful for, and being able to go hiking in Oregon is one of them.
Top

Nice VM! Love that third shot with the clouds between you, the river and Phoca.

It's nice to have this area to yourself, and I usually only do this hike very early in the morning or approach from the backside via Palmer Mill road.

Last year I wasn't hosting Tday dinner and got to do this as an early morning run and got to have an elk encounter in the semi darkness on the first scree field before the falls. Today, I had to cook. Now everyone is stuffed and immobile on the couch.
Top

Fantastic, that looked like a fun hike. With no precipitation coming down it was probably even more enjoyable. Nice way to spend Thanksgiving, and I bet you did work up a big appetite after that hike.
Jim's Hikes

There are, I think, many things to be thankful for, and being able to go hiking in Oregon is one of them.

Very nice! I also love the cloud picture! I need a better camera for sure! I like mine, but a DSLR would be so much more fun! Happy Thanksgiving, and thank you for the beautiful pics and the report!!
Top

Great pics, Van -- and hang on to that wife of yours! I can only dream of being sent off to go hiking on Thanksgiving in order to work up an appetite... sweet deal..!

I was up on the Waukena trail yesterday and noticed a number of those spiders on the snow above the trail. Not sure if it was some kind of annual hatch or maybe then just stick out more on the snow.

Thanks for the report. I made it up to Devils last weekend and there was a lot of snow at that time so we opted out of going that high yesterday.
Top

Splintercat wrote:Great pics, Van -- and hang on to that wife of yours! I can only dream of being sent off to go hiking on Thanksgiving in order to work up an appetite... sweet deal..!

Absolutely - she's a real treasure. But just so you don't get the wrong impression - after a good hike and a great meal, I had to get on with washing the dishes and cleaning the kitchen. Like they say - no such thing as a free lunch (or hike).
Top

Okay, that's more like it... and don't forget to take out the trash, while you're at it...