After spending most of the week speaking and schmoozing at a conference, I desperately needed a little “me” time on the trail. Not feeling overly ambitious, I decided on an old favorite – Dog Mountain. Due to the construction on Hwy 14 this year, this would be my first hike of Dog for 2010. The weather people had promised clearing for the day but I went through some serious mist and a few brief rain squalls heading E on I-84. However, by the time I pulled into the parking lot, it was sunny, fairly warm, with a light wind.

It was bluebird sunny all the way to the first open viewpoint at around 1600’, where I had a good view of Defiance (with a bit more snow), 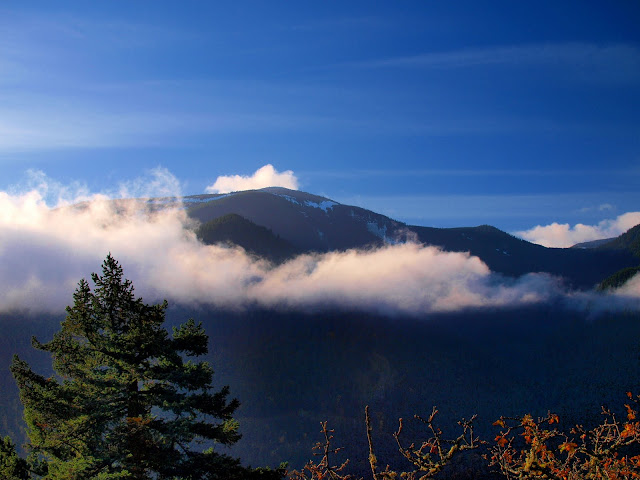 and W down the Gorge. 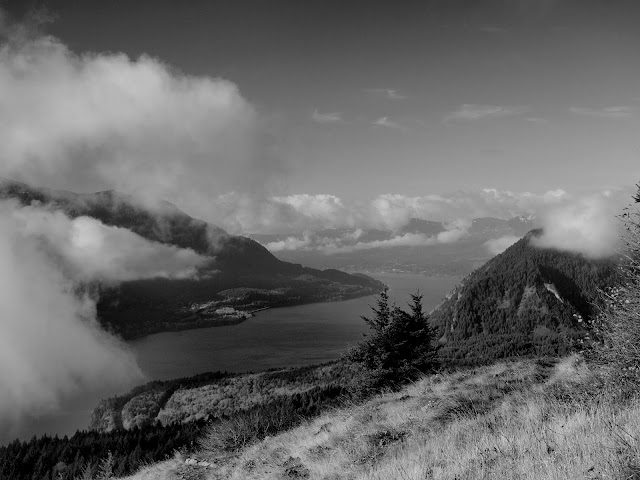 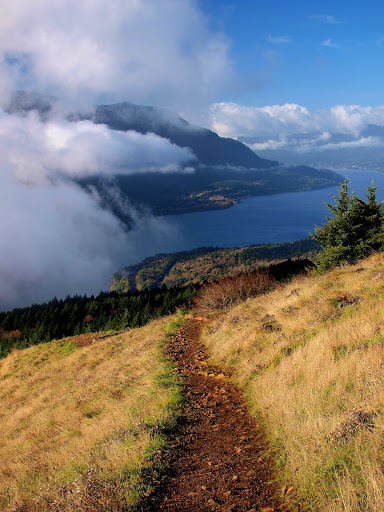 As I climbed higher, the wind began to pick up and the clouds, which had earlier looked to be dissipating, actually started to thicken and infiltrate the forest, creating some wonderful visual effects with the remaining sunlight. 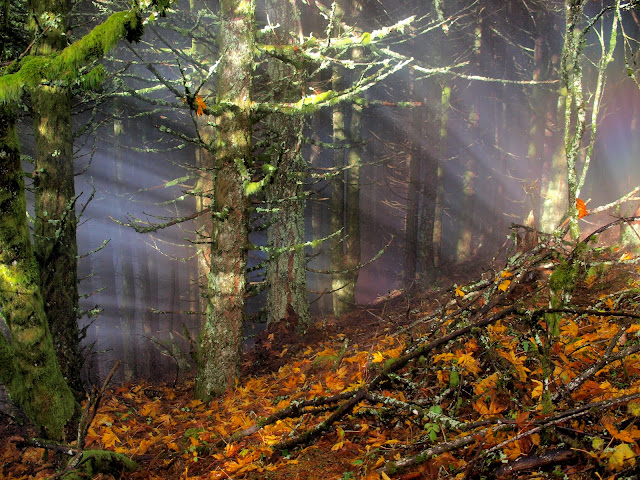 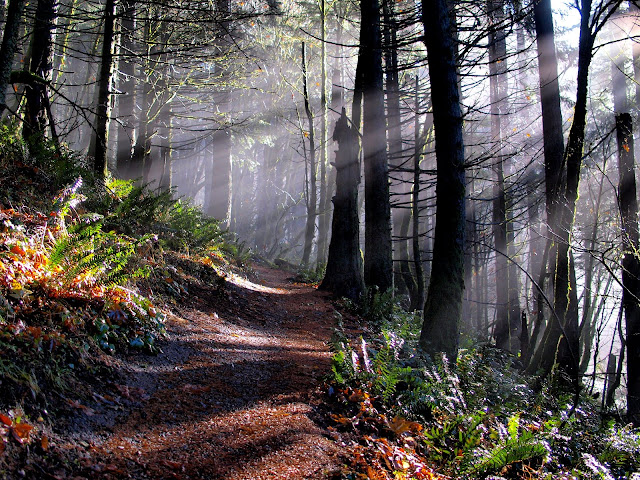 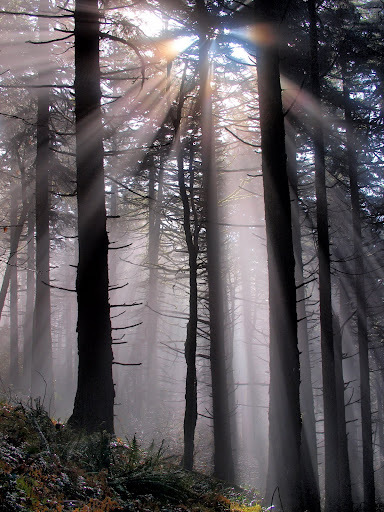 By the time I reached Puppy Dog at 2500’, the wind had risen further and great swirls of mist and clouds were being blown up and over the W side of the mountain. 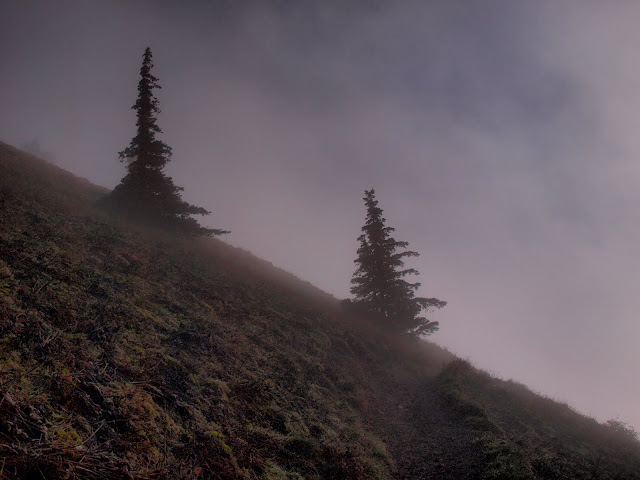 Puppy Dog was in a white-out one moment, 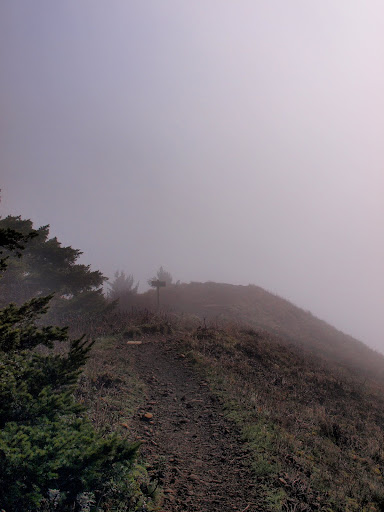 and clear the next. 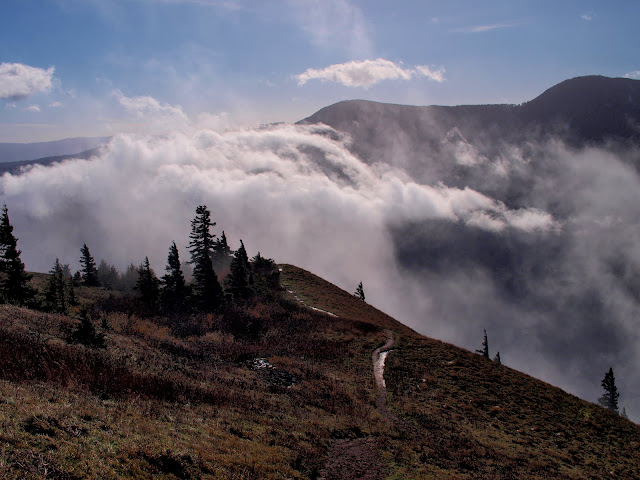 The wind across the ridge from Puppy Dog to the summit wasn’t too strong (10-15 mph) but it was cold, so I hurried on to the summit, had a snack, then headed down via Augspurger Mtn trail (#4407). From this trail, I watched as the wind scoured the W face of Dog with clouds and fog. 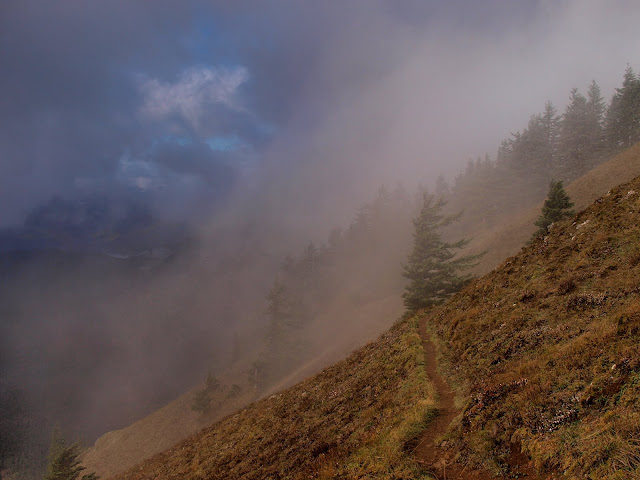 There was no snow to speak of on any of the trails or the summit. However, there were some slick spots on the 4407 trail due to a mixture of mud, pine needles, and wet leaves. Lower down there were still a few vestiges of Fall colors but they’ll all be gone soon. 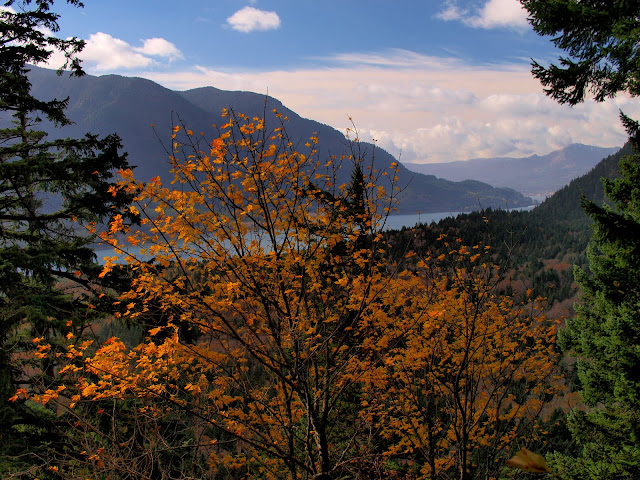 In season, flowers seem to get all the attention. But at this time a year the fungi have a chance to be appreciated for their delicate colorations, patterns, and textures. 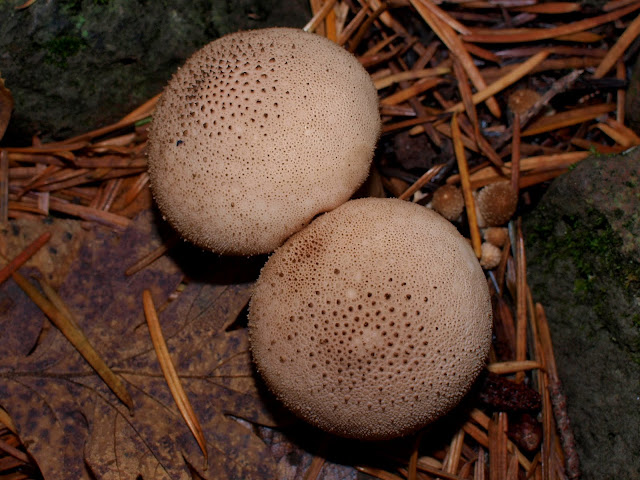 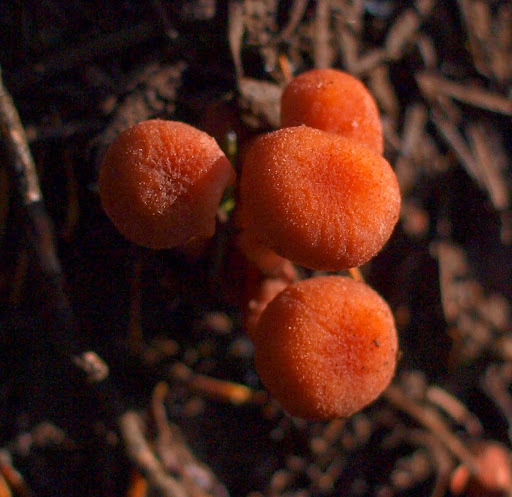 Dog is a short hike but a good one - particularly for souls who spend too much time in cubicles and conferences. By the time I’d gotten back to the car, the sun was back out and all of the conference-induced spiritual mustiness had dissipated. Thank you Dog Mountain!
Last edited by VanMarmot on November 13th, 2010, 10:04 am, edited 1 time in total.
Top

Nice report and pics, Van -- I LOVE that kind of weather!

Very nice photos this is my favorite time to visit the puppy. And your Hamilton, Hardy Tr was very nice to. I think If we did not have week days off at the opposite ends of the week we may run into each other.

Take care -Tom
The downhill of the mind is harder than the uphill of the body. - Yuichiro Miura
Top

Beautiful collection of photos. I love the "God rays" that come from below.
"When we try to pick out anything by itself, we find it hitched to everything else in the Universe." - John Muir
Top

Very nice pictures on a great day! I am tempted to follow in your footsteps again VanMarmot. Had my eye on Dog Mountain for a couple of weeks (yet another trail that I have yet to hike). Right now I'm fighting a nasty cold. Maybe next weekend, weather and health permitting.

The weather looked deceivingly mild in your pictures. With the wind I bet it got quite chilly, eh?
Jim's Hikes

Crusak wrote: The weather looked deceivingly mild in your pictures. With the wind I bet it got quite chilly, eh?

The day started out kind of warm, so the wind didn't have a lot cold air to work with - windchill maybe in the mid-30s? I was fine with a cap w/earflaps + a soft shell parka. Much better than the times I've done Dog on New Year's Day.
Top

geographics wrote:i would like to step forward and propose for the cover image for the forum's calendar your 4th photo, PB126135R.jpg. No text, no border, just that image with your signature, edge to edge. wow! I've never seen any photo like it. Nice report too.