I had the good fortune to have today free for a hike and my first thought was of Table Mountain, thinking that there might still be snow on it (there isn’t). So instead I did a loop up Hamilton Mountain, over to Hardy Ridge, and back via the equestrian TH. It was another bluebird day as I started toward Hamilton, 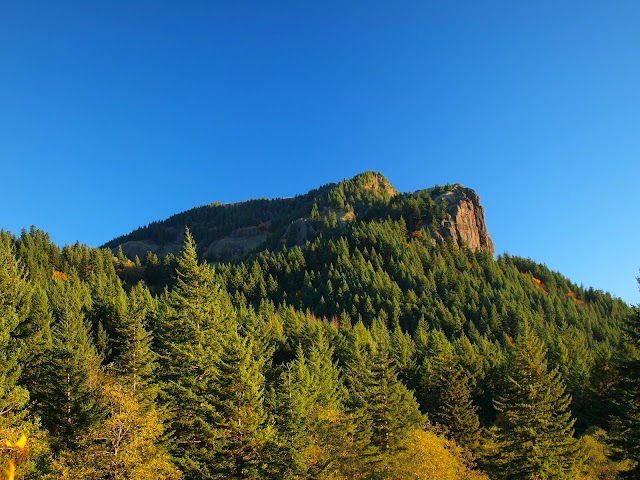 but this weather isn’t supposed to last. Next week we’re due for some real November weather. Rodney Falls were going pretty good, probably helped along by all the snow that melted recently. 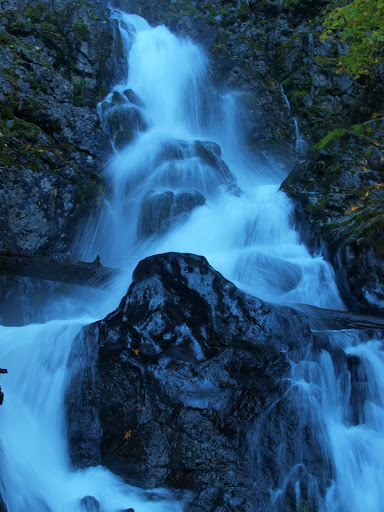 I’ve seen these cliffs many times, but still find them fascinating, particularly when lit by the early morning sun. 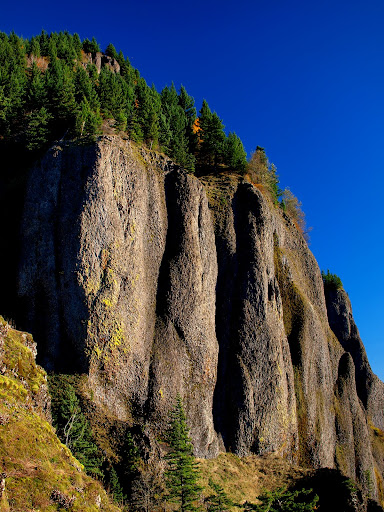 Below, in the Gorge, Falls colors were in full swing. 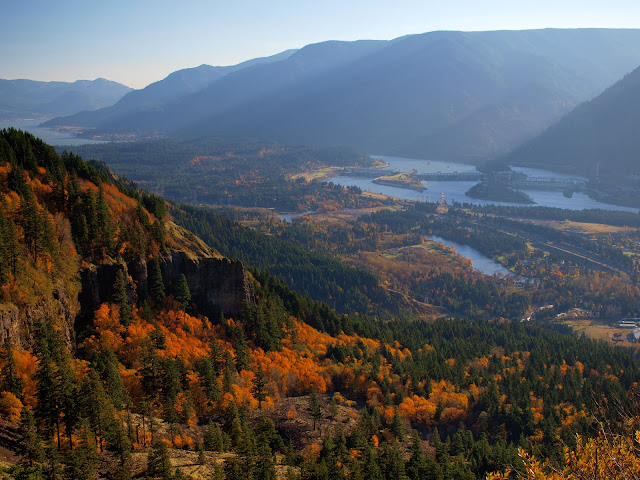 I had an absolutely clear view of Table and Adams from the top of Hamilton – not a trace of snow left. Except for a small cloud just to the right of Adams, the sky was unblemished blue. 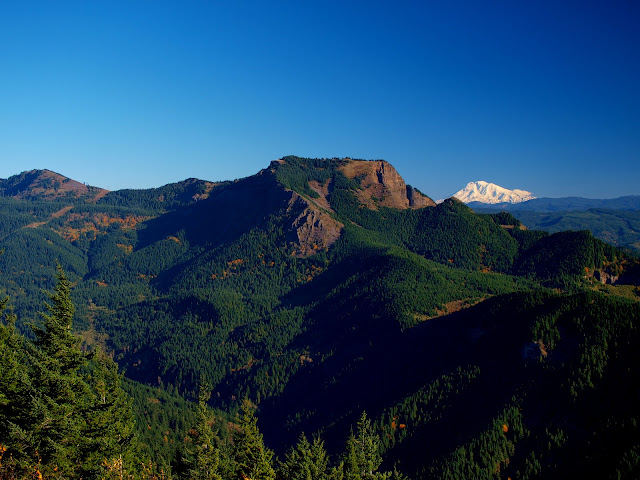 It was sunny and unusually warm, but also very windy. When I crossed the rocky saddle N of Hamilton, I had to brace with my walking stick. After that, it was down Don’s Way, across the equestrian bridge over Hardy Creek, up the (almost finished) trail connecting the bridge to the road, then along the road to the East Hardy Ridge Trail, which took me to the top of the ridge, with its great view of Hood. 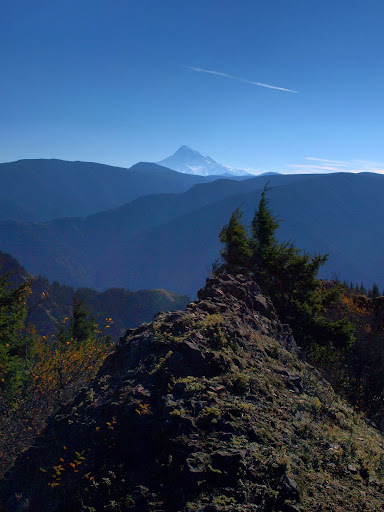 I made a try for Phlox Point but the wind was howling across the ridge and it was a fight to stand while also moving forward. After several hundred yards of being knocked around like my cat’s mousey toy, I turned back and found a sheltered spot for lunch. After that, I headed down the trail on the west side of the ridge - no wind but a little overgrown in spots – to the road leading either back to Rodney Falls or the equestrian TH. Rather than retrace my route, I decided to make a full loop by walking back to my car at Beacon Rock via the equestrian TH and the road back to Hwy 14 (the gate to the upper lot is closed M-Th, so I was parked along Hwy 14). The road wasn’t very aesthetic, but it did allow for a true loop of about 11 mi and 3300’. Another great day (mostly) in the woods!
Top

Wow! - Great photos and nice report. I'm a little envious - I woke up in Mt. Vernon, drove up to Bellingham and then drove all the way back to Vancouver this afternoon. Great views of the mountains all the way from Canada to a few views of Hood as I neared home and sorely wished I could have taken today off! Maybe thursday....

It is funny to think that I almost went to Hardy Ridge today, but instead ended up following one of Don's maps for a loop over Greenleaf Peak, Birkenfeld Mountain and Table Mountain! We could theoretically have run into each other. As is, I did not meet a single soul all day. I also found it quite windy...

I actually have plans to follow your footsteps (VanMarmot) tomorrow, if I can just get some work out the way tonight.
Some people are really fit at eighty; thankfully I still have many years to get into shape…
Top

Looking at you from across the gorge on the trail to Upper McCord Creek Falls.

LOL - my plan for today was also either Table Mtn or Hamilton Mtn. However, was not able to get a day off work.
It's absolutely gorgeous weather for hiking.

I especially like the fall colors picture, looking down the river.
Top

Spectactular day you had [lucky dog] thats a hike I have always enjoyed and always will. Your photos always capture the true nature of your trips not an easy thing to do

Don Nelsen wrote:Wow! - Great photos and nice report. I'm a little envious - I woke up in Mt. Vernon, drove up to Bellingham and then drove all the way back to Vancouver this afternoon. Great views of the mountains all the way from Canada to a few views of Hood as I neared home and sorely wished I could have taken today off! Maybe thursday....

I have relitives in Bellingham go Salmon fishing up at the Frazier a few times a year that is a drive I kind of enjoy in Indian summer fall weather. If the traffic gods are kind! Lots of mountains to admire.
The downhill of the mind is harder than the uphill of the body. - Yuichiro Miura
Top

Love your photos and have been on the loop which is wonderful.
Yesterday, we went up Table Mountain and too had some wonderful views (no photos) including the sun through the woods and the leaves changing and the four volcanoes - WOW. Also had a tad more wind than we wanted but found a nice place near the summit for lunch and then down the West Ridge (which is greatly improved from prior years) keeping a pole so we didn't get blown over with some of the gusts.
All in all, wonderful time to be in the last full sun of fall.
Top
Post Reply
8 posts • Page 1 of 1