Yesterday I grabbed the opportunity to do a loop trip hike over Observation Peak in the Trapper Creek Wilderness. I was hoping that the early morning fog would lift (it did), that there’d be new untracked snow high in the wilderness (there was), and that I’d get really big views of other NW peaks each with a fresh blanket of this season’s first snow (I did). I usually do Observation Peak by going up the 192 trail and returning via the 132. But it finally dawned on me that I could make a different loop by using the Dry Creek (194) and Big Hollow (158) trails. Fall colors were all out as I headed N along the Dry Creek trail from the Trapper Creek TH. This trail is wide, pretty well maintained, and, except for a bit at its end, easy to follow. 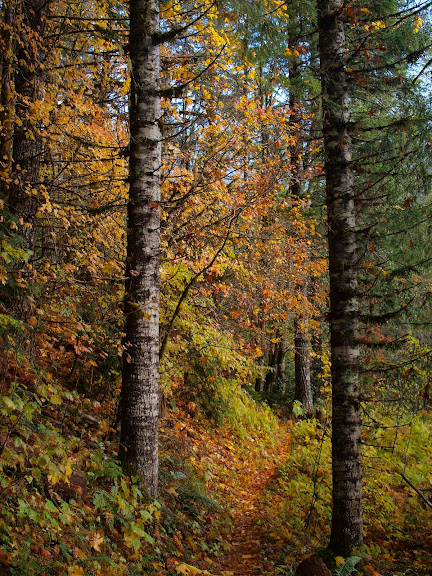 The flowers are all gone to be replaced by some cool fungi. This one struck sort of a blood-shot eyeball Halloween theme, 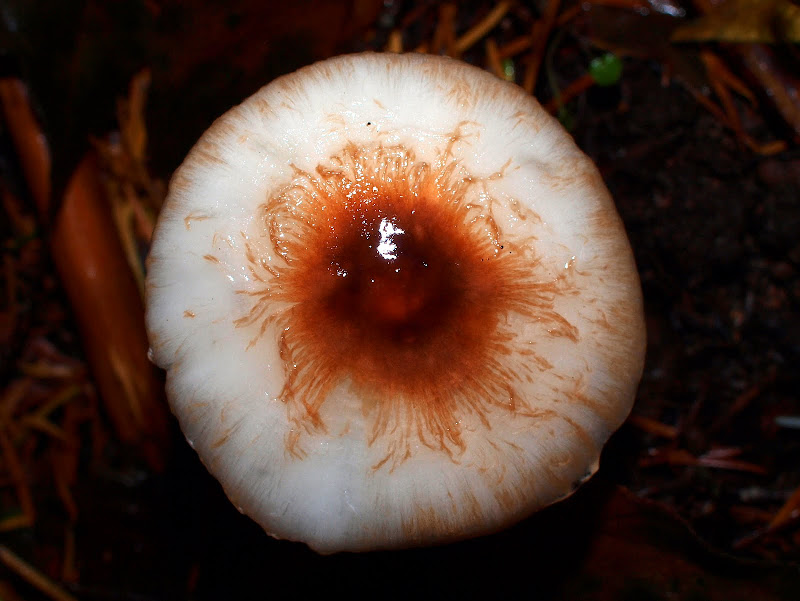 while others were just interesting (to me at least). 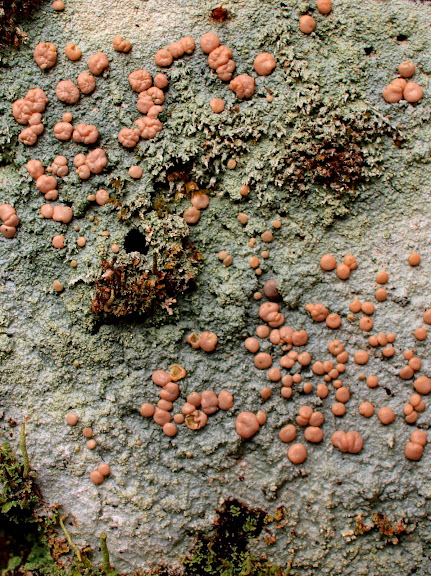 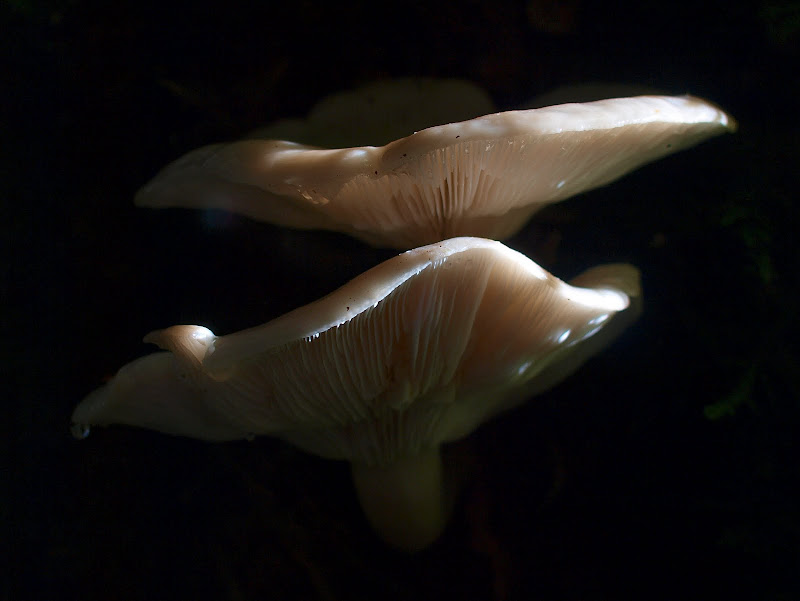 The trail follows the creek but there are only a few spots where you can actually see it. 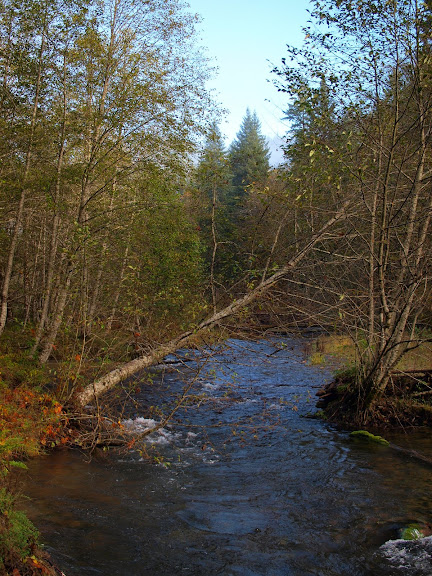 After almost 4 miles, the 194 reaches a junction with the Big Hollow (158) trail and a short spur trail (actually part of the 158) to Road 64; this junction is marked with a sign. 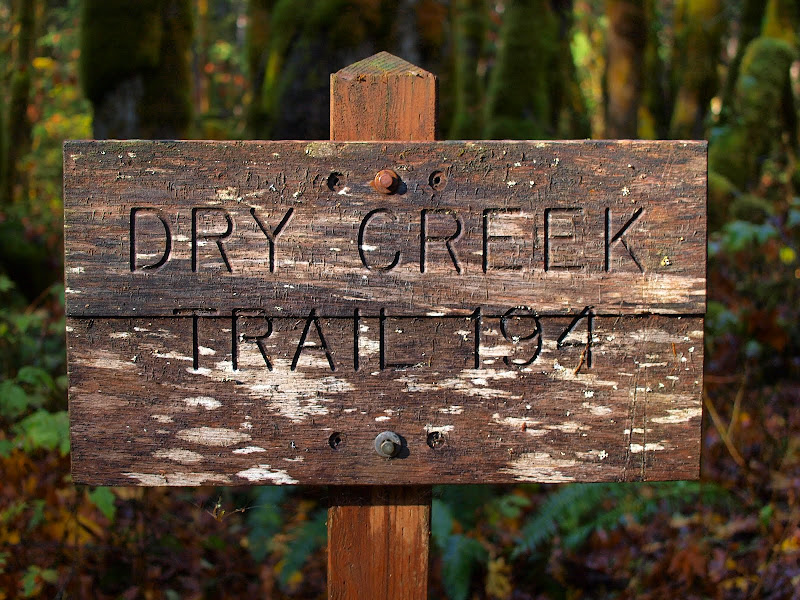 About 100 yds before this sign and junction, the 194 seemed to just disappear into a tributary of Dry Creek and I had to use aerial branch-balancing techniques to keep from having to wade. This was odd since I’d just crossed two almost new, very sturdy bridges over relatively insignificant tributaries.

From this junction, the 158 begins a steady climb of 2200’ up to the ridge below the peak. The fog lifted and the sun began breaking through mid-morning, 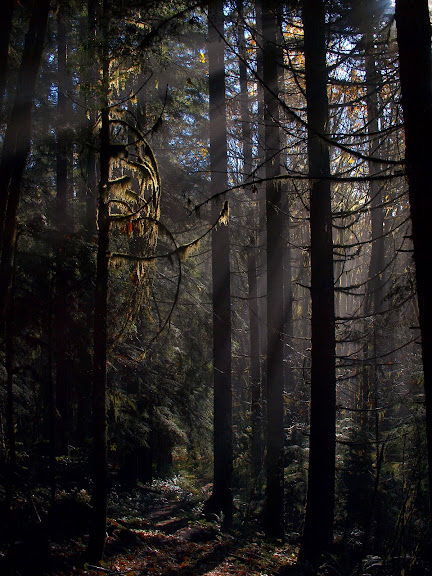 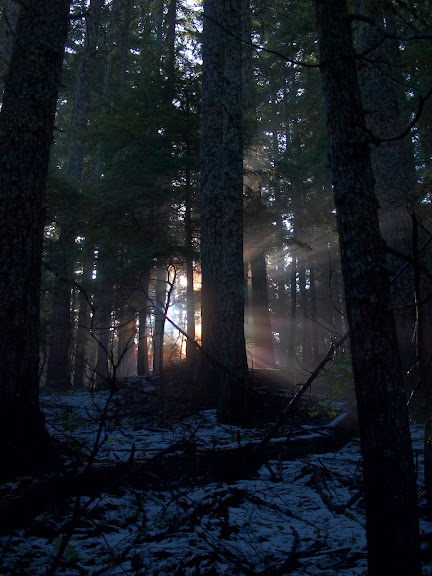 and I hit the first traces of snow around 3000’. The arrow marks one of the ceramic insulators that used to protect the phone line that ran to the now long-gone lookout on Observation Peak. There are still a few of these visible in trees along the trail. 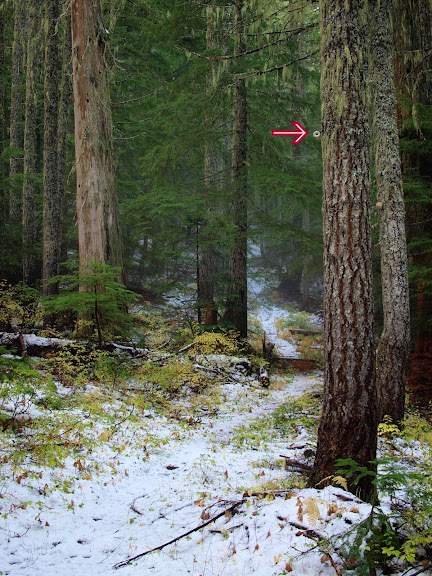 The snow - fresh, untracked - was over 6” deep by the time I crossed the unnamed tributary of Big Hollow Creek, 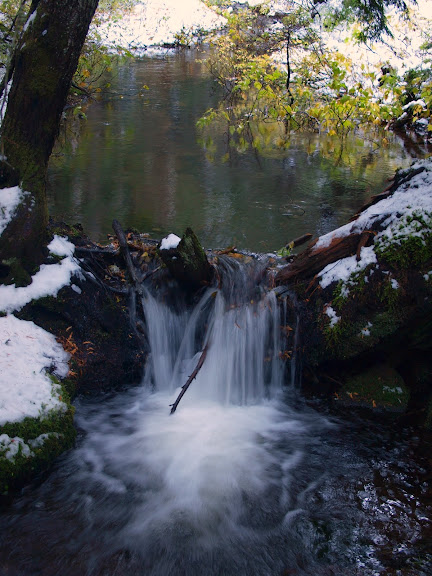 and by the time I reached the 132 trail at 3700’, the snow was from 18”-24” deep - just enough for a short posthole but not really enough to justify hauling snowshoes up the mountain. 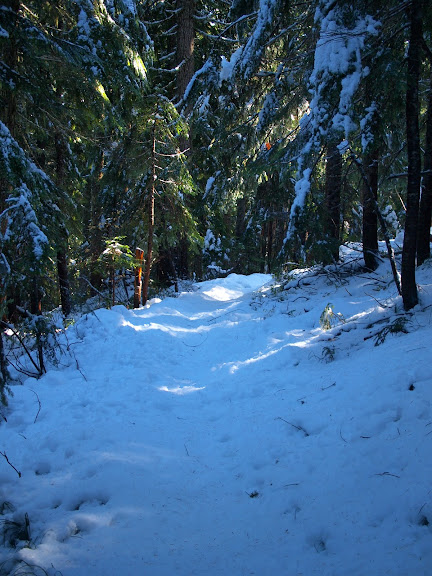 There was about 2’ of snow accumulated on the summit of Observation and, although it was clear and sunny, a very stiff cross-wind made standing difficult at time. It was also a bit cold. BUT I got all the views I could have hoped for, including St. Helens, 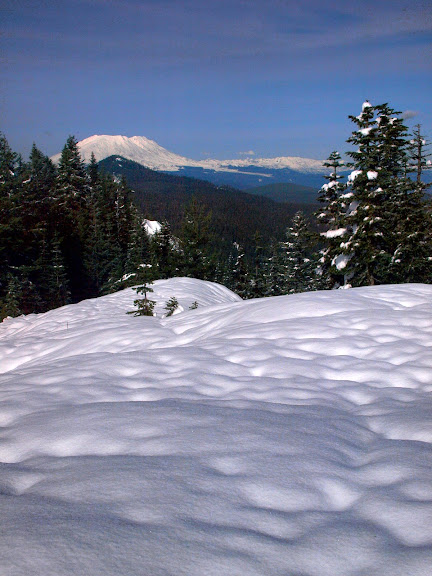 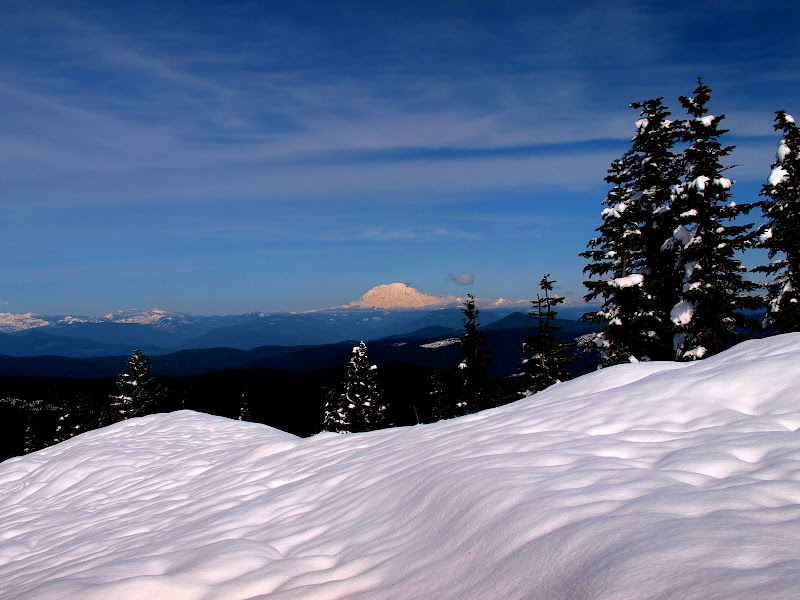 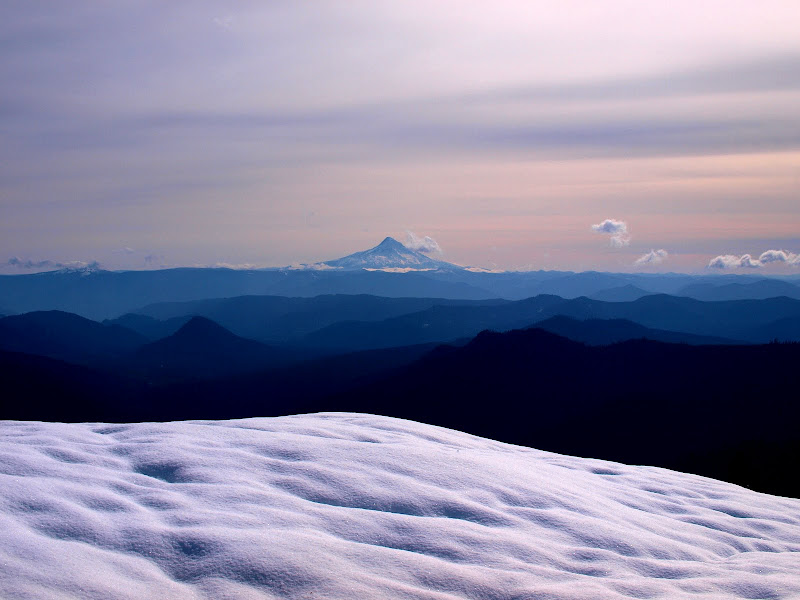 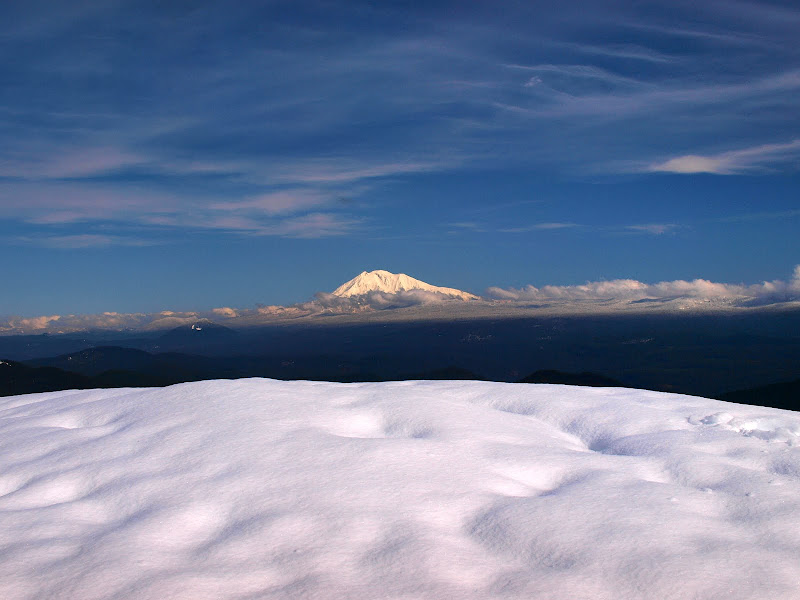 I took the Observation Peak trail (132) back to the TH. It was covered with 12” to 24” of snow pretty much all the way to its junction with the Sunrise (198) trail, after which the snow quickly vanished. Loop is about 15 mi with 3100’ of gain on generally very good (snow not considered), easy to follow trails, and with a view that always makes the climb worth while. On an earlier hike to North Lake, I’d thought the next time I see Mt. Defiance it’ll have snow and, sure enough, this was my view of Defiance from outside Carson. 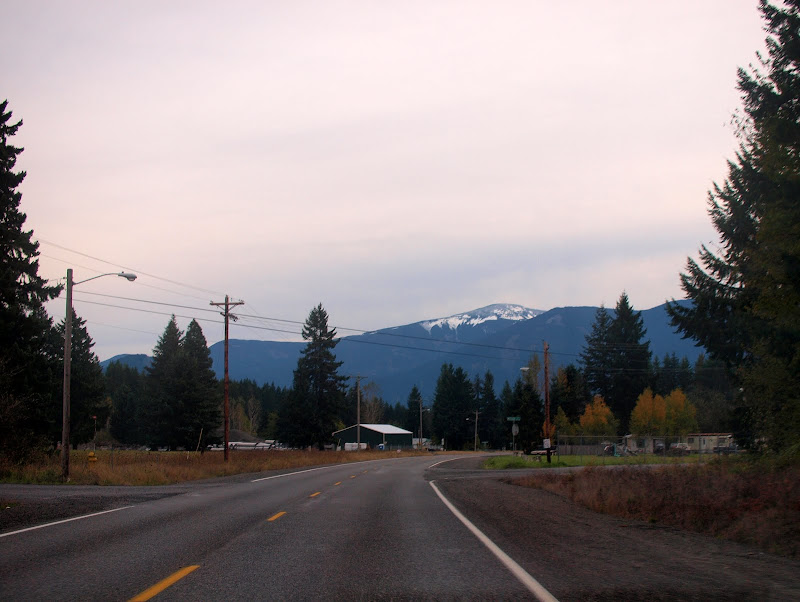 Wow ! Fantastic photos ! Your forest pics are my favorite.
Filling my bucket, one hike at a time.
Amanda
Top

Yes nice shots, I went skiing at TL on the 27th.
Top

Great photos! I personally loved the way the cloud formations turned out from the summit photos in one of my favorite wilderness areas. Did you see any wildlife signs?
Luke

Common sense is the collection of prejudices acquired by age eighteen."
-- Albert Einstein (1879-1955)

There were a lot of small mammal tracks in the snow and (maybe) a hoof print or two, but I didn't actually see any wildlife.
Top
Post Reply
9 posts • Page 1 of 1