Wednesday I had the opportunity to do hike the Bald Mountain loop (Sullivan, 3rd edition, Hike #69). My original plan was Yocum Ridge but dithering and the desire for a big view of Hood won out. I started at the Ramona Falls TH but entered the Sandy River drainage at the seasonal bridge (which was removed on 10/18). After crossing the river on a log (no easy crossing was apparent early in the morning), I headed SE up the Sandy River, enjoying views of Hood along the way. 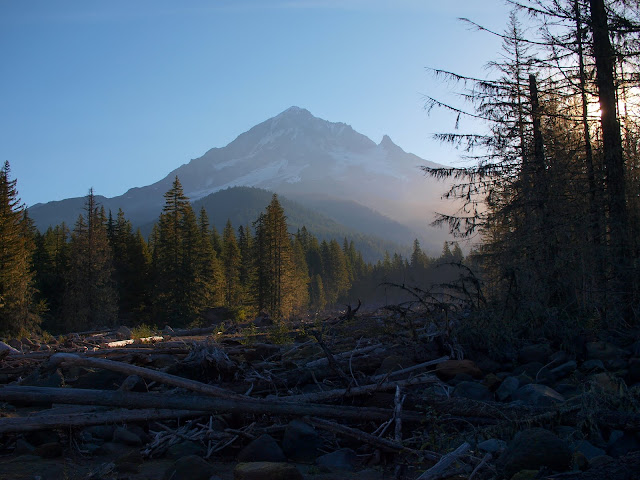 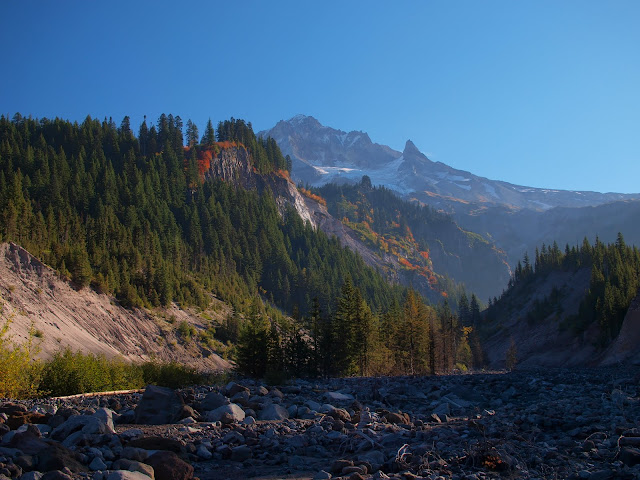 Yes, it was another blue bird day in Oregon, but I’m not apologizing for taking advantage of it. After 3 miles wandering up the boulder field of the river (this is the dotted green trail on the Government Camp Green Trails map), I hit the PCT crossing and headed up to Ramona Falls. 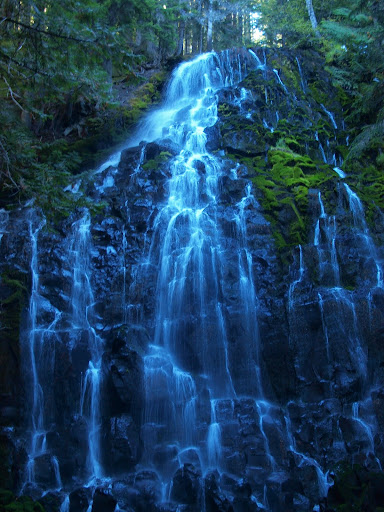 In all the years I’ve lived in Oregon, this was my first visit to the Falls. How could that be? Well, until I let mountaineering go as an avocation a couple of years ago, the only hikes I ever did were conditioning hikes for climbs. So I’ve climbed Mt. Defiance in all seasons way too many times, which left no time for the beauty of Ramona Falls. I enjoyed climbing a lot, but I’m glad there is something equally enjoyable and beautiful to take its place.

I followed the 600 trail (formerly the PCT before it lost its horse access) to a crossing at Muddy Fork, reveling along the way in the seasonal demise of the devils club (die, you barbed devil, die!). 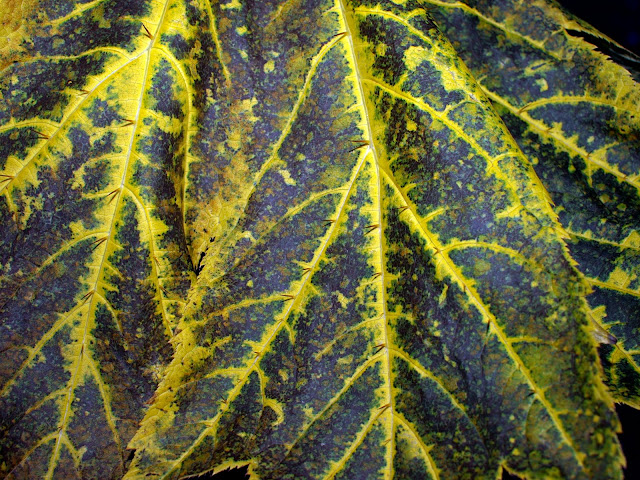 The 600 trail is definitely no longer horse-worthy, but, with a little care, it’s not a big issue for hikers – at least in dry, non-icy, non-snowy weather. 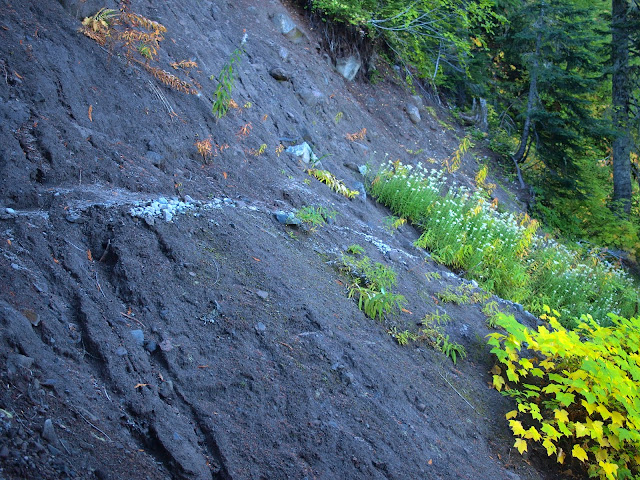 Crossing the Muddy Fork was no problem at this low-water time of year, except for having to flounder through the brush between its two branches. But there was a nice view of my goal, Bald Mountain. 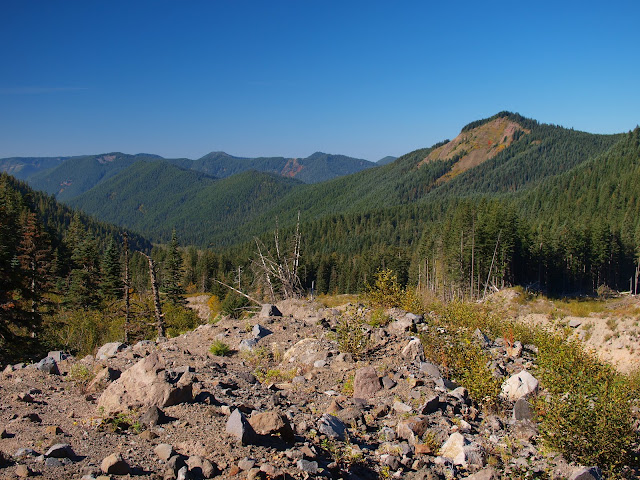 Falls colors were out along the 600 trail below Bald Mountain, 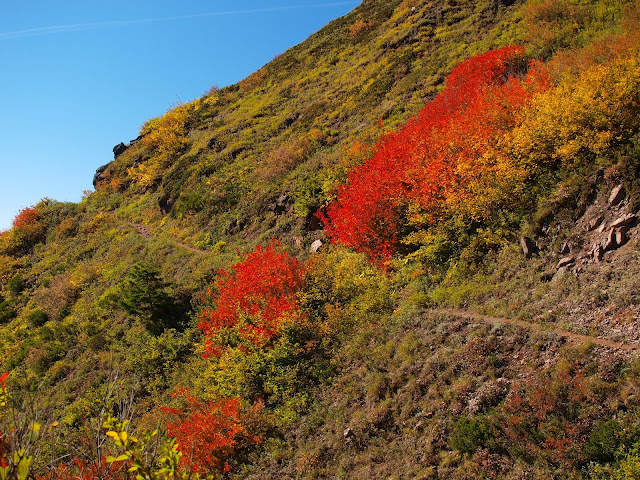 and the view from the trail back toward Hood was one of the best I’ve seen this season (and there have been a lot of Hood views this year). 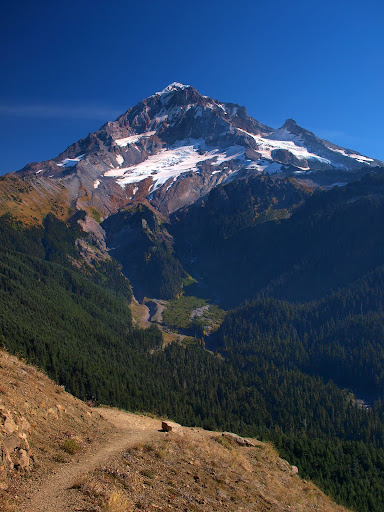 At the four-way junction N of Bald Mountain, I took the PCT (formerly the 797 trail) back toward the Sandy River. Fall colors weren’t everywhere, which only made them more striking when they did appear. 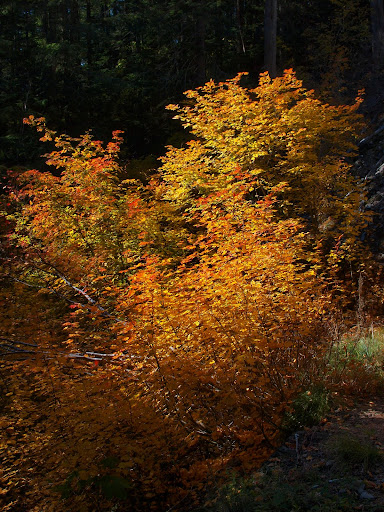 There was a new bridge being built on the 797 leading to the river, and a gentlemen was carving steps in it with a chisel and mallet. Cool! 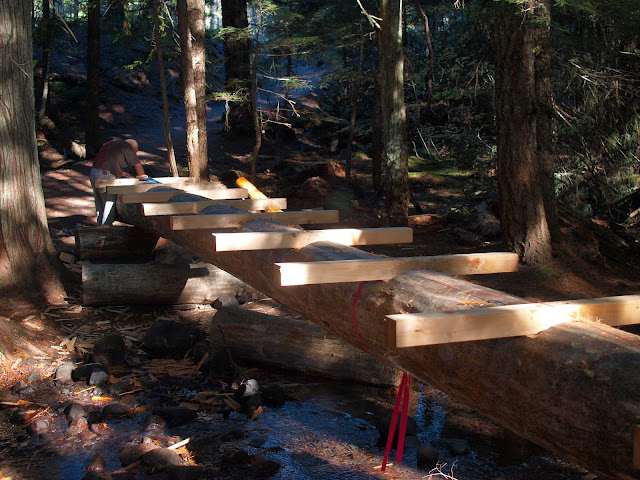 When I got back to the Sandy, there was a nice plank bridge across it, so I didn’t have to repeat the log crossing aerial act I'd performed in the morning. 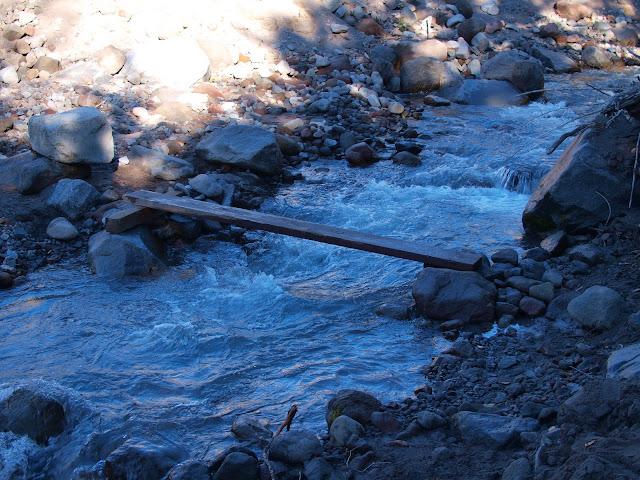 Maybe it is senility, but I swear this plank wasn’t there in the morning! Good hike (13.2 mi, 2000’ gain), great views, and totally excellent weather. It’ll make the coming rain just that much more bearable (La Niña is coming! La Niña is coming!).
Top

It was a fine day, and your trip looks like it was a rewarding one. Was it slow going at first, making your way up the boulder field of the river? If I'm reading it right, it looks like that route allowed you to keep Hood in sight, correct?

Nice pictures, I especially like the second one with the river drainage, the hills nearby, and Hood in the background up high.

One thing I've noticed is that most of the members here at portlandhikers.org really like to hike in the vicinity of Mount Hood. Crazy as it may sound, my buddies and I have avoided Hood for years, because of the crowds... that will change soon I hope!

But as for the case of the disappearing/reappearing plank across the river... well... all I can say is... it's right there, in the picture.

Crusak wrote:It was a fine day, and your trip looks like it was a rewarding one. Was it slow going at first, making your way up the boulder field of the river? If I'm reading it right, it looks like that route allowed you to keep Hood in sight, correct?

My choice was to cross the river bed to the other side and take the 797 trail to the Falls - which, judging from the width & wear of the trail, is the way almost everyone goes - or go up the river bed. This wasn't hard to do and was not appreciably slower than a trail. The crossing of the PCT is well marked with tape & cairns. However, you can't see Hood the whole time, just in a few choice locations.

Ramona Falls is very popular - huge parking lot & well-used trail - so it would likely have been real crowded on a weekend - at least up to the Falls. There were 12+ cars in the lot even on a Wednesday afternoon. But the other trails away from the Falls - 600 & PCT - might be much less busy, even on a weekend. But the view from Bald Mtn is worth it.
Top

I spent Wednesday night at 6500 feet on Yocum Ridge. There are nice views on that trail as well. I think the guy working on the bridge over Ramona Creek puts in the little board bridge when he comes in to work. That's my guess.
Believe it or not, I barely ever ride a mountain bike.
Top

Is the 797 bridge going over the Muddy Fork? or Ramona Creek?
Top

retired jerry wrote:Is the 797 bridge going over the Muddy Fork? or Ramona Creek?

That's weird, I remember crossing that in the last couple months and the crossing was fine.

And Ramona Creek is so small it doesn't hardly matter.

It looks like a fine piece of work though. Keep people employed?
Top

retired jerry wrote:That's weird, I remember crossing that in the last couple months and the crossing was fine.

And Ramona Creek is so small it doesn't hardly matter.

It looks like a fine piece of work though. Keep people employed?

I guess. It looks like a lot of well-built bridge for such a small bit of water.
Top

That new bridge was a mystery to me too. I've been back there at almost every time of year and the water is rarely more than a few inches deep at most. Plus since it's in wilderness somehow they had to drag all that stuff back there and it was a huge pile of logs before they got started. My guess is it just has something to do with that section of trail being part of the PCT?
By the way, if you like going back there when the ground is covered with snow, that bridge will make things easier since that is one of the two or three key spots to finding the route.
That plank bridge will wash away this weekend and if it's like last year, someone will replace it. I think there's a bridge gnome..
Great pics of your journey!
Top